A road trip through Montana might include such famed stops as Yellowstone and Glacier National Parks or Big Sky. But as you plan your itinerary, remember that long before this stunning area was a US State, it was already the home of many Native people — including Assiniboine, Blackfeet, Chippewa, Cree, Crow, Gros Ventre, Kootenai, Little Shell Chippewa, Northern Cheyenne, Pend d’Oreille, Salish, Shoshoni, and Sioux. It’s important to respect their traditions, history, and cultural landmarks, and you can do just that by visiting these Native American monuments in Montana on your next road trip through the state. 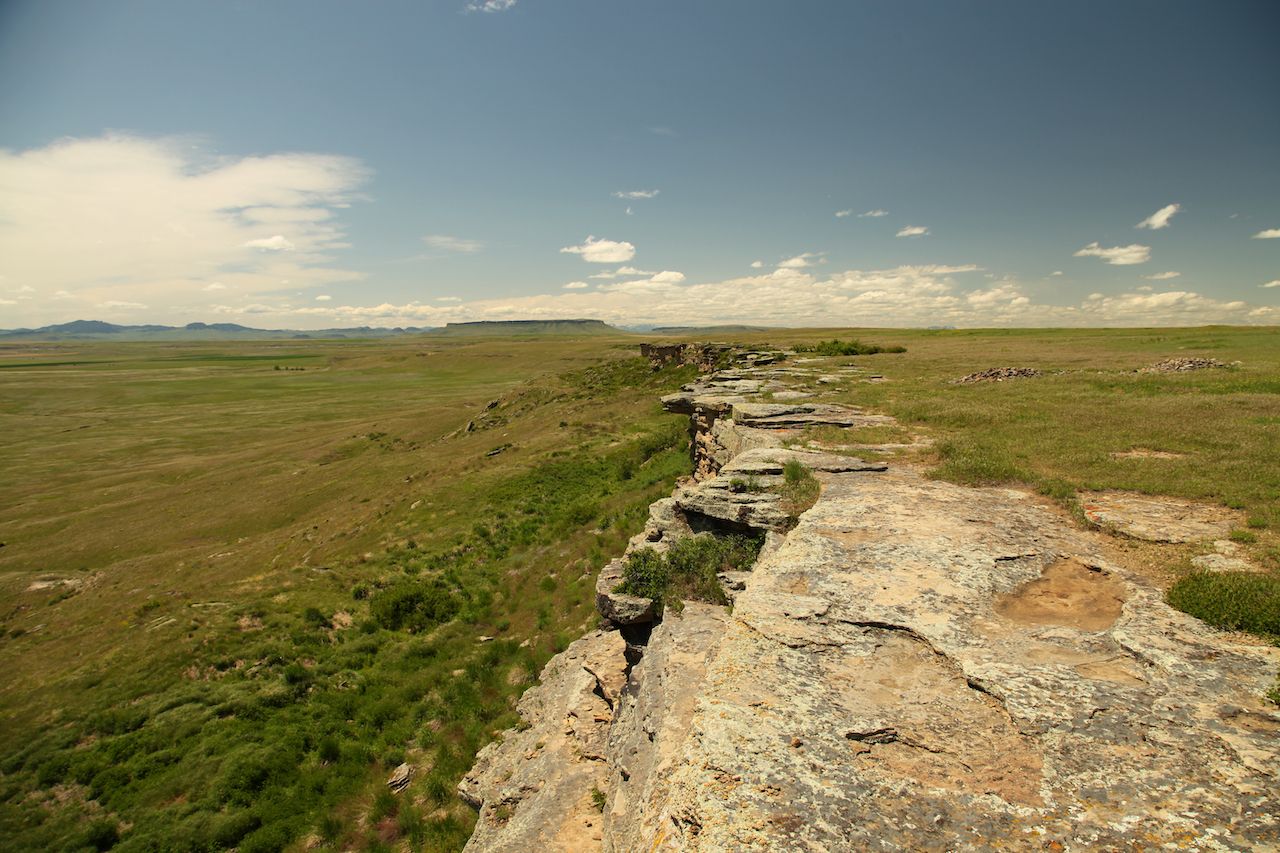 A buffalo jump may have a recreational-sounding name, but its use had a more serious purpose. Indigenous Americans used cliff faces for hunting bison, running them to the edge and forcing them over as a mass hunting technique. First Peoples Buffalo Jump State Park and National Historic Landmark recognize and protect what is believed to be the largest buffalo jump, just over 80 miles north of Helena. Before the arrival of European settlers, this site was used for thousands of years by the A’aninin, Assiniboine, Cree, Kalispel, Piegan Blackfeet, Salish, and Shoshone peoples. You can see the result — literally — in the 18 feet of “compacted buffalo remains” amassed at the bottom of the cliff.

Your first stop at the park should be the visitor’s center to read up on the area’s history. A small museum and bookstore are available. Then, hike the interpretive trail around the park. If a longer hike is in order, multiple loop trails, ranging from just over a mile to a few miles in length, will take you around the park’s high plain environment. Spring through fall is the best time to visit, and this park is day-use only — so don’t plan to camp on-site. The entire park is excellent for bird-watching, so bring those binoculars and a picnic lunch. 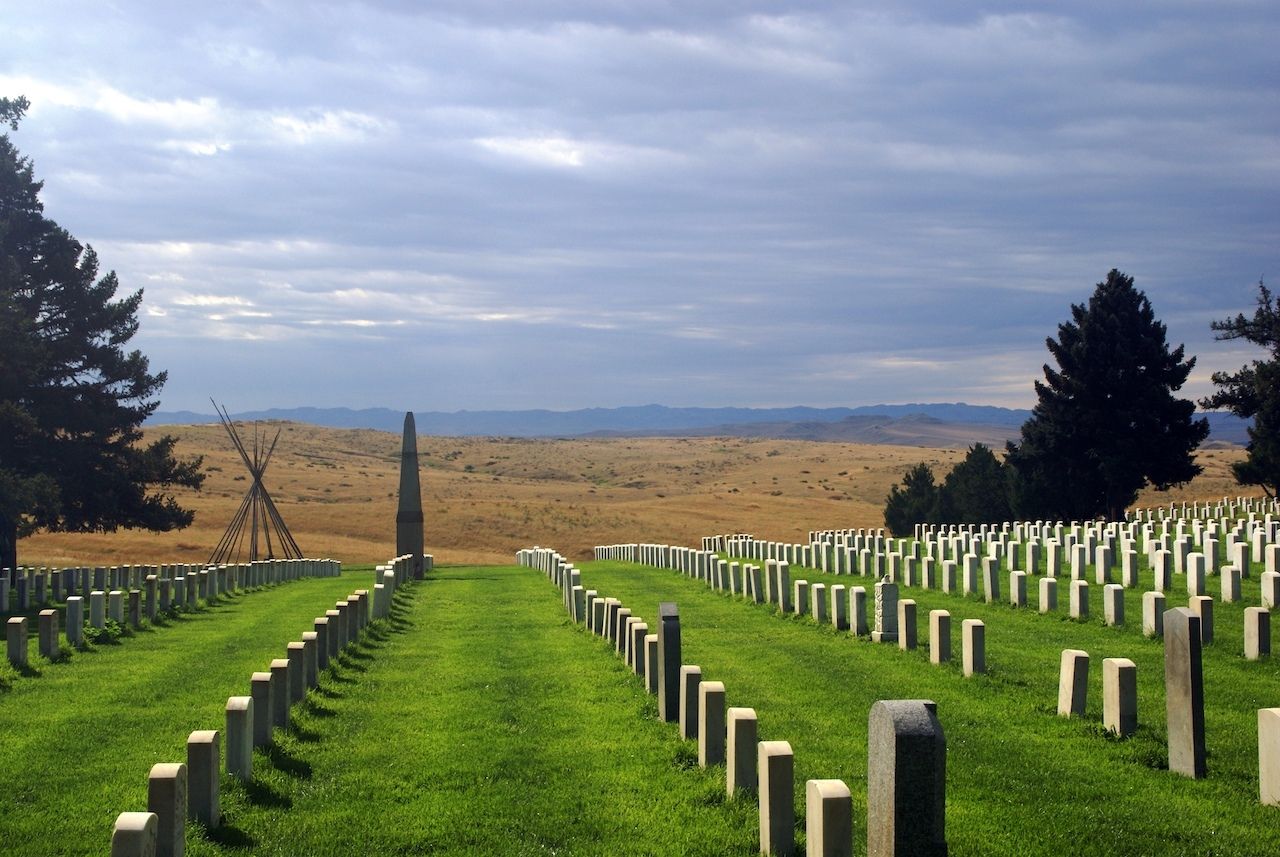 In 1876, the banks of the Little Bighorn River were the site of a historic battle between the Lakota and Cheyenne peoples and the US Army — and they are one of the better-known Native American monuments in Montana. These first peoples had opted out of signing the Treaty of Fort Laramie, refusing to bow to its restrictions, which included recognizing reservation land in the western part of South Dakota and restricting to set areas their hunting practices developed over thousands of years. While other first peoples did sign, the United States failed to uphold its side of the bargain anyway, and gold-hungry settlers swarmed the Black Hills.

Tensions rose between the United States military and the Lakota and Cheyenne peoples, leading to armed conflict at what is now Little Bighorn Battlefield National Monument. This site marked the end of the road for Lt. Col. George A. Custer and 262 of his soldiers who died among the bluffs and banks of the river. Over 120 years later, you can tour the battlefields, view Custer National Cemetery, and explore the surrounding plains on a hike. While the memorial has been updated to contain more information about the Native peoples and includes gravemarkers of some of the Indigenous American fighters, the extent of the US soldiers’ headstones still gives arguably too much attention to Custer and his ill-fated endeavor. Today, the grassy site of this bloody battle feels quite peaceful, and along the monument’s trails, you should keep your eyes peeled for wildlife, including deer, snakes, and five species of bats. 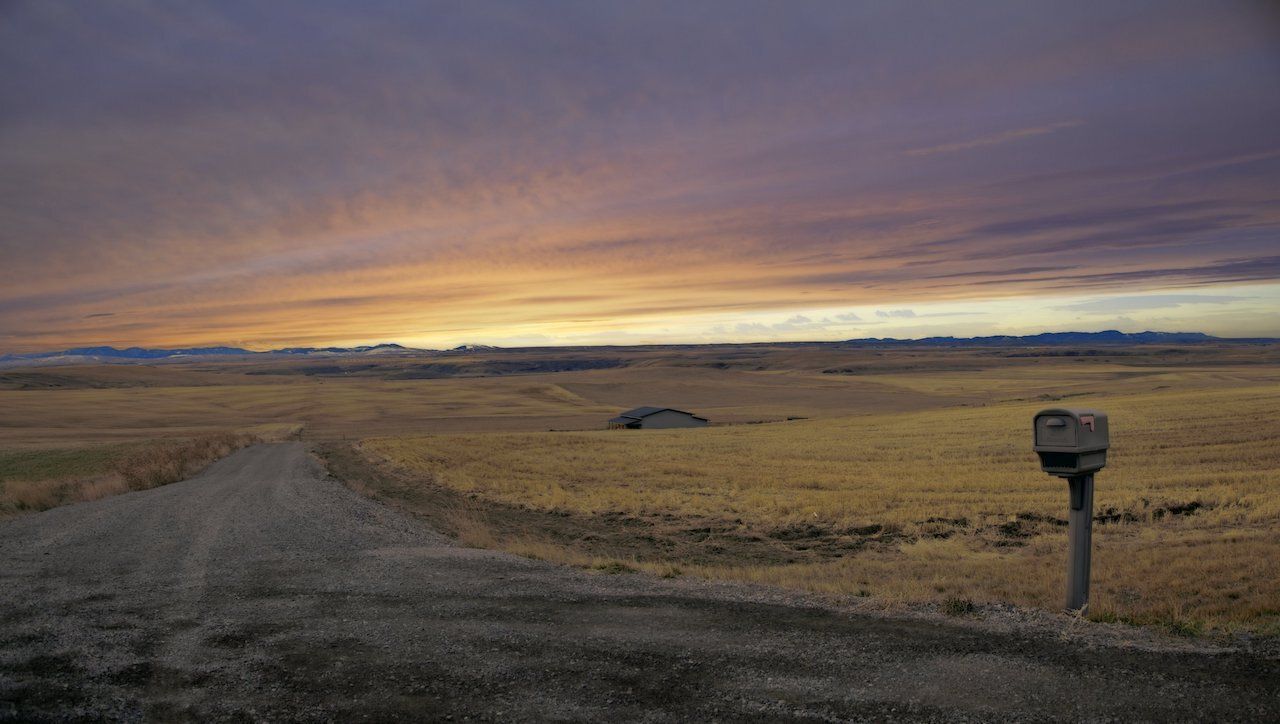 Road trips are usually quite scenic, and this one comes with a lot of history to contemplate as well. The Sleeping Buffalo Trail begins in Great Falls and ends just south of Glasgow. Along the way is the Wahkpa Chu’gn Buffalo Jump which houses a 2,000-pound Cory Holmes Bison Sculpture; and the Fort Belknap Buffalo Reserve, where you can often spot — and photograph — bison from the side of the road.

Part of the Sleeping Buffalo Trail experience is a stop at Sleeping Buffalo Hot Springs, where you can soak in (literally) the area’s history at a century-old hot spring resort. Driving the route from start to finish takes about five hours, plus however long you spend at each stop. Many spots for overnight stays are available along the way, including in the towns of Havre and Chinook, where you can try the Bear Paw Motel and RV resort. 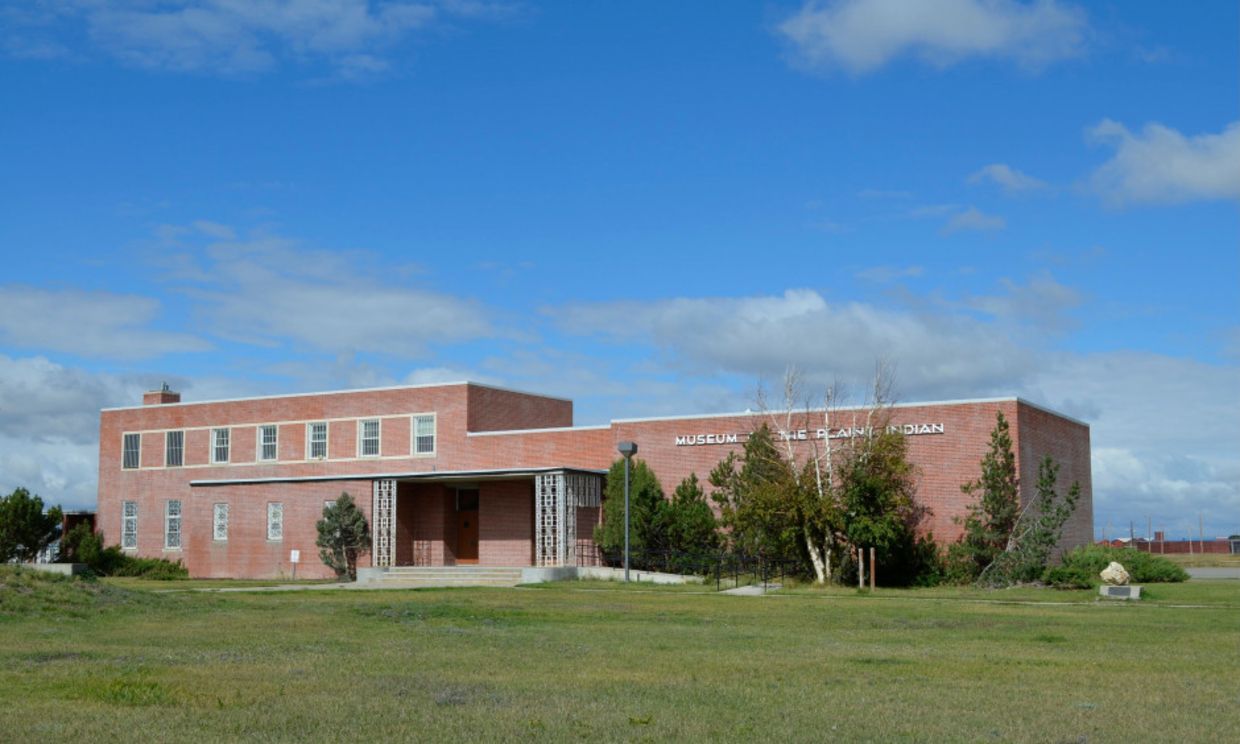 Photo: US Department of the Interior

This tour of Native American monuments in Montana closes with an indoor option for educating yourself on the original inhabitants of what is now Montana: the Museum of the Plains Indian in Browning. Operated by the Indian Arts and Craft Board, a division of the US Department of the Interior, this museum highlights the Blackfeet, Crow, Northern Cheyenne, Sioux Assiniboine, Arapaho, Shoshone, Nez Percé, Flathead, Chippewa, and Cree peoples. Rotating exhibits featuring the work of Native artists, photographers, and groups pass through, with permanent displays showcasing traditional clothing, household items, and artifacts. Admission is $6 for adults and $2 for children age six and over. During the off-season from October through May, the museum completely free.

Editor’s Note: The Museum of the Plains Indian is temporarily closed due to the COVID-19 pandemic.