The food served in Hawaii is shaped by the many people who have called the islands home. Ancient Hawaiians cultivated taro and relied on the sea for fish. In the 1850s, people from the Philippines, China, Japan, Portugal, Korea, Puerto Rico and elsewhere came to Hawaii to work on sugar and pineapple plantations. Oahu became a site for an American naval station in 1908, and became the 50th state in 1959. Throughout all of the changes, new foods have come and gone and mixed and mingled to become what is today known as local food.

Dan Nakasone, the producer for Emmy-nominated series “Family Ingredients” and a contributing writer for the Hawaii Herald, says that some level of fusion in the food served in Hawaii started in home kitchens during the plantation era.

“In the early days, ethnic groups were segregated on the plantations,” Nakasone says. “But when it came time to eat, they shared.”

“I grew up in Wahiawa and spent summers during high school working on the pineapple fields,” Nakasone says. “I usually worked with other kids my age, but one night I was pulled to work with the older Filipino men in their 60s and 70s. During dinner, they called me over to join them. They pulled out their kau kau tins (lunch pails); the top had proteins and vegetables, and the bottom had rice. Everyone put their tops in the middle to share. They started to go for my food, and I went for theirs. Growing up, we always shared food. In Hawaii, that’s what you do.”

The term “fusion food” in Hawaii draws back to many influences from the islands’ history. Today, family celebrations often include potluck spreads, where food influences from all over the world are represented.

“By trying other people’s food, you break barriers and show your willingness to accept others,” Nakasone says. “Once you try it, you’re accepted.” 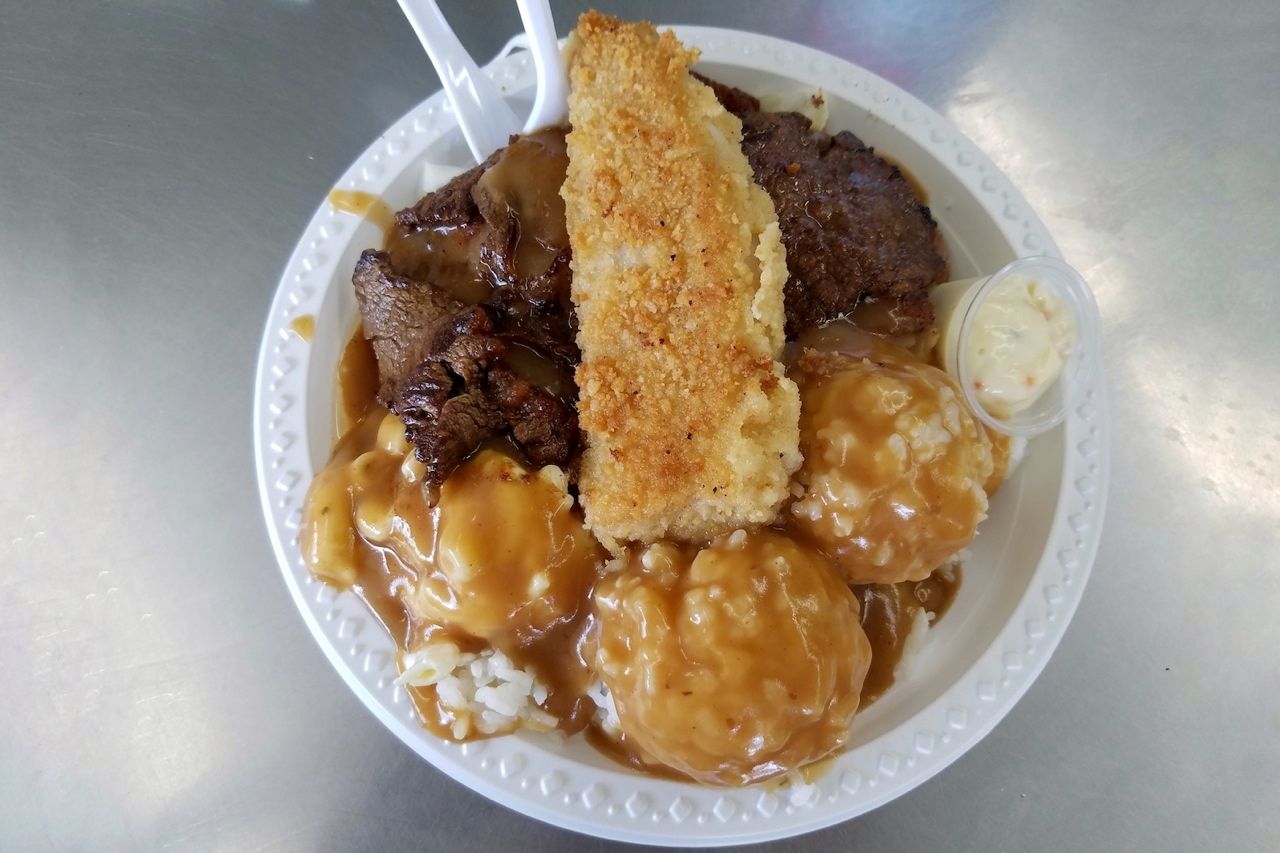 The mix plate, or “plate lunch,” is popular for its diversity, affordability, and ability to satiate the craving you have for different foods all at once. Macaroni salad and rice are standard sides, while the main course on a plate lunch could be anything from Chinese char siu to Japanese pork katsu to Filipino pork adobo.

It’s “like the plate one would have after walking through the potluck food line, the plate lunch includes a little of everything,” Nakasone says.

Where to try it: Alicia’s Market. This Kalihi plate lunch spot plate serves up all different combinations of local favorites. Try the Hawaiian plate with kalua pig, lau, and lomi salmon; or get a combination plate with poke and your choice of meat, like roast pork or baked furikake salmon. 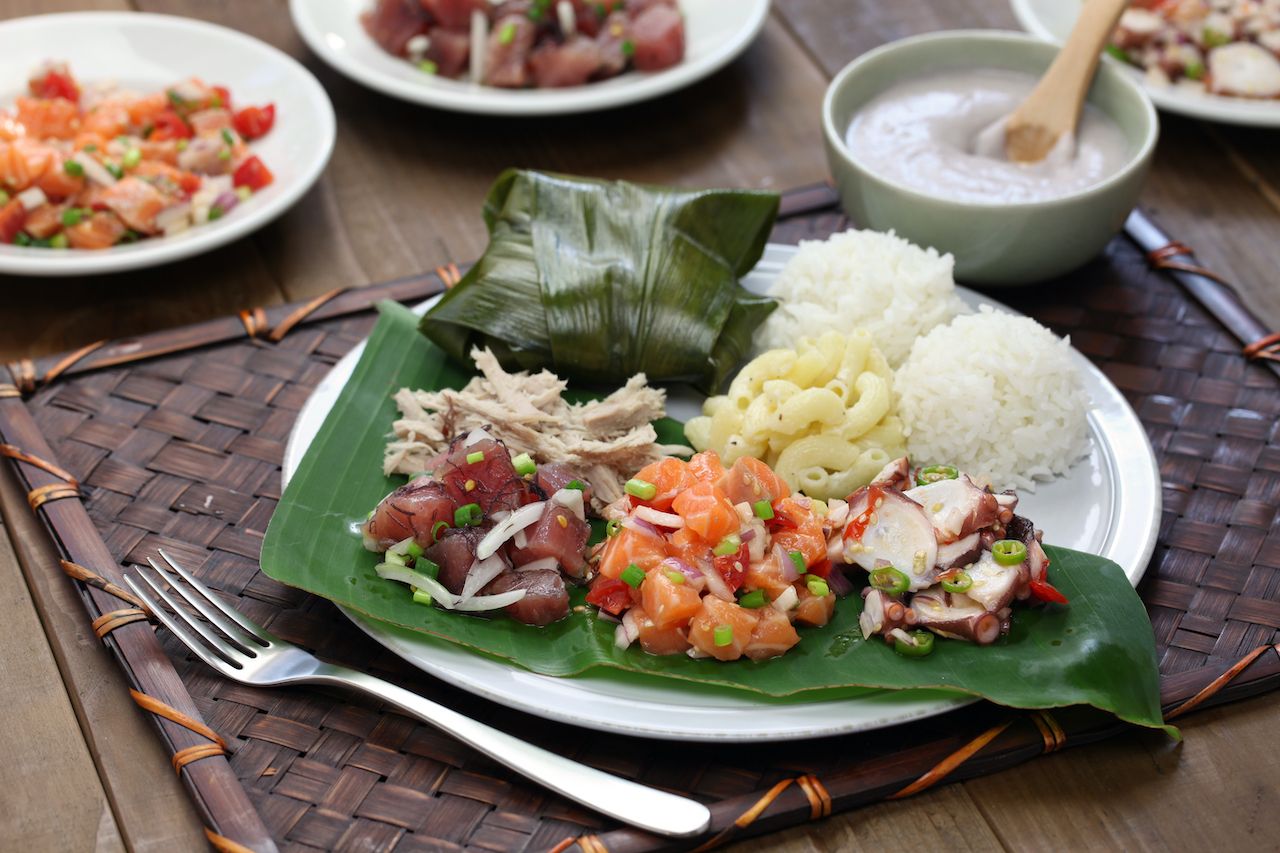 Poke is a native Hawaiian dish that’s now become popular across the mainland US. In the early days, meat was scraped off the fish and served with Hawaiian salt, limu (seaweed), and roasted ground candlenut meat. Today, poke incorporates various cultural influences from all over the world using ingredients like soy sauce, sesame oil, chili peppers, and whatever else strikes the chef’s fancy. The highly adaptable dish (the name simply means to cut into pieces) draws from cuisines around the world and is constantly evolving.

Where to try it: Tanioka’s Seafood and Catering. One of the most popular places for poke is Tanioka’s. Well-known for its quality and variety, Tanioka’s sells bowls of poke by the pound at market price. Spicy Ahi is always a favorite. 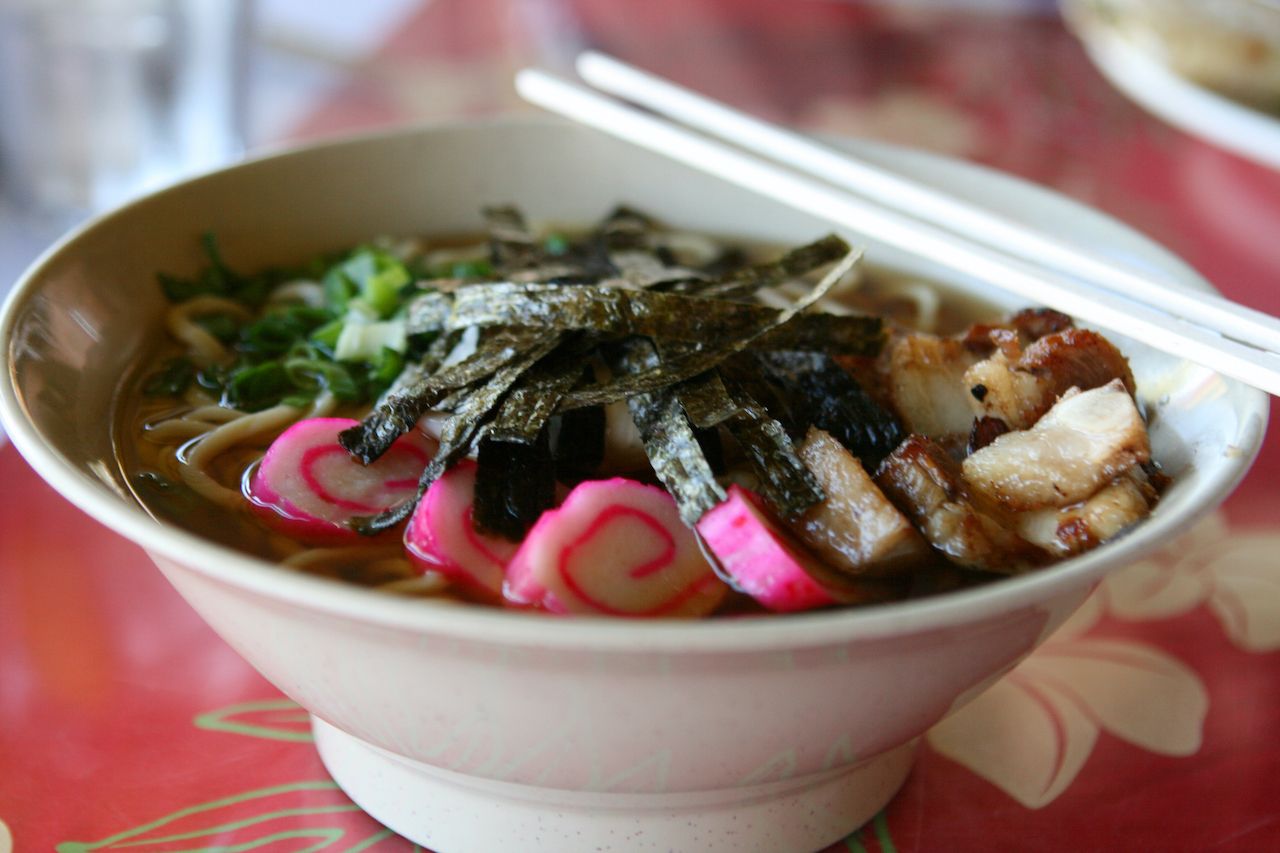 Saimin is one of Hawaii’s comfort foods. It’s a combination of Chinese noodles and Japanese dashi (broth). Samin stands started in sugar plantation camps and later opened up near sporting events, movie theaters, and pool halls. Today, many versions of Saimin are readily available all over the islands.

Where to try it: Shige’s Saimin Stand. This family-owned Saimin stand traces its roots back to the 1950s and remains a staple on Oahu. Choose from plain saimin or a bowl loaded up with wontons and vegetables. 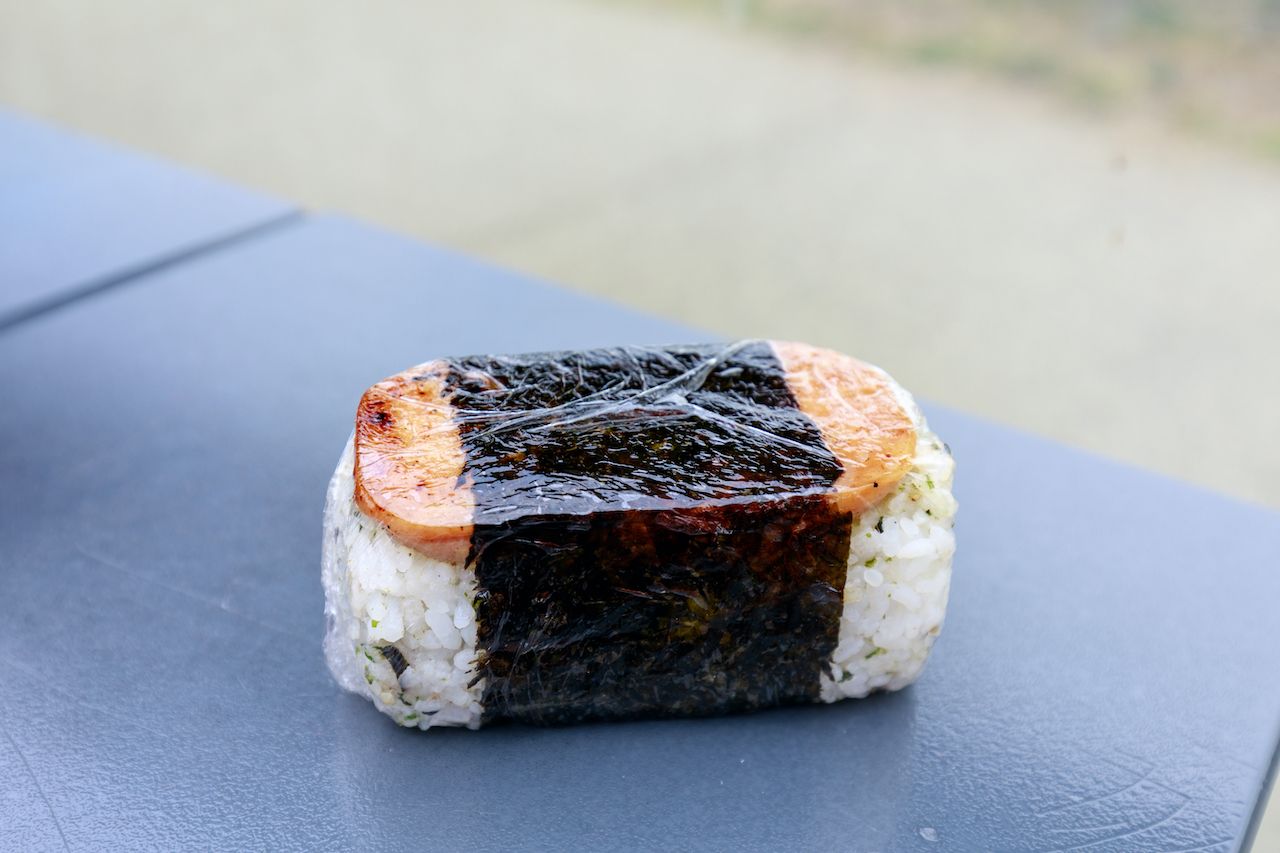 Probably one of Hawaii’s most popular fusion foods is spam musubi. It’s a simple invention that combines rice with the local favorite Spam, which is then wrapped in nori (seaweed). It’s on every visitor’s foodie bucket list and every local’s picnic packing list.

Where to try it: 7-Eleven. Long voted “Best Musubi” by locals, 7-Eleven locations sell classic spam musubis for just a buck or two. You can “splurge” on a deluxe spam musubi that has spam, egg, and furikake, too.

Address: Various 7-Eleven locations all over the islands. 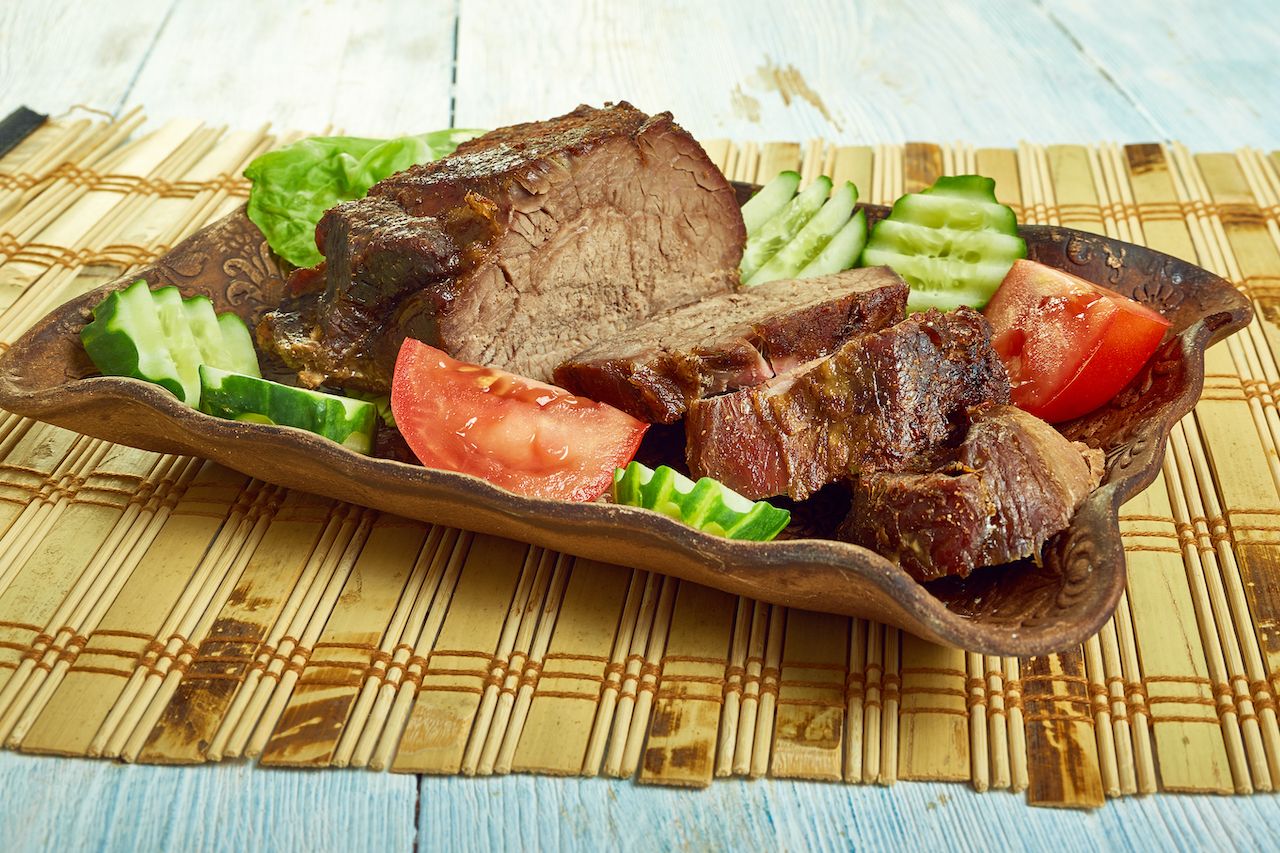 Cows aren’t native to the Hawaiian islands, but they have become a beloved food source. The animals came in the late 18th century, and ranchers used the meat and soy sauce to make pipikaula, which means beef rope. Think of it as Hawaii’s version of beef jerky.

Where to try it: Helena’s Hawaiian Food. Helena’s is home to some of the best Hawaiian food on the islands, and that includes the homemade short rib pipikaula. It’s perfect with some Hawaiian chili pepper water and a side of white rice.

Food + DrinkIn Kauai, Poke Is an Ever-Evolving Dish Unlike Anything on Mainland America
Tagged
Food + Drink Restaurants + Bars
What did you think of this story?
Meh
Good
Awesome