In Her Shoes has been honored for Best Diversity & Inclusion Video in the 24th Annual Webby Awards. Hailed as the “Internet’s highest honor” by The New York Times, The Webby Awards, presented by the International Academy of Digital Arts and Sciences (IADAS), is the leading international awards organization honoring excellence on the Internet.

Filmmaking is always collaborative, but with In Her Shoes, our story has really come full circle. We are the team behind the film, Doree Simon (director, producer, and host) and Caz Tanner (cinematographer and editor). We met through this project and have become great friends, collaborators, and co-workers here at Matador.

In Her Shoes explores women’s empowerment efforts through a day in the life of Rani, a 17-year-old from Mumbai’s red-light area. 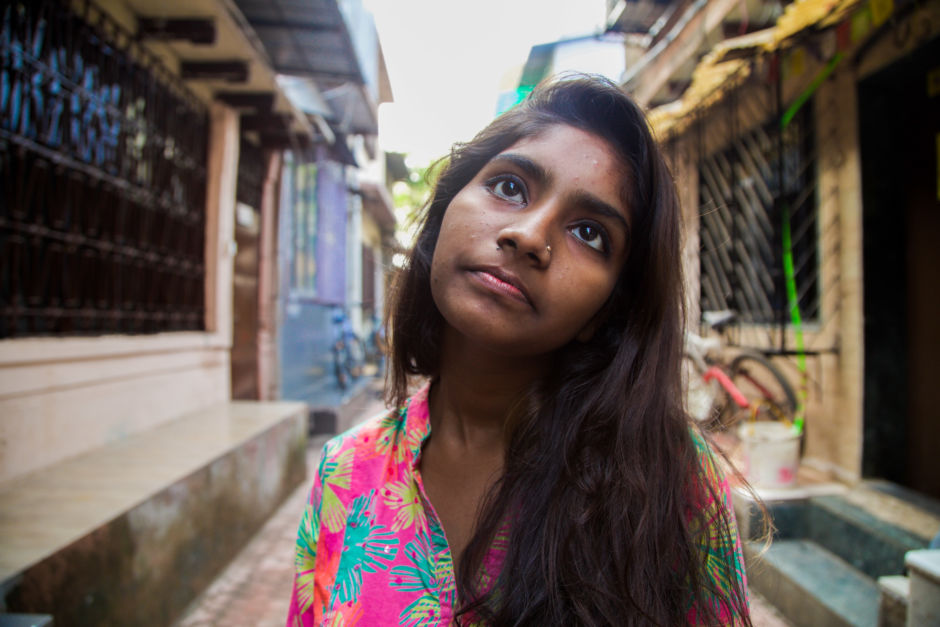 Rani is a teenager from Mumbai. In In Her Shoes we see how she deals with day-to-day life, from her habit of checking likes on Instagram to overcoming the typical destiny that comes with being the daughter of a sex worker.

The inspiration for the film came from Doree’s frustration with pre-existing media coverage that so often portrays women’s stories in a way that generalizes complicated situations and leads to viewers becoming desensitized to seeing yet another story of poverty and oppression.

Our film strives to humanize women and girls who are so often represented as caricatures and tell their stories in a positive, engaging, and relatable way. Balancing lighthearted moments with stories of struggle was a challenge, but we’re proud of the final result.

Since we’ve now spent many hours talking about, forming, and analyzing this story, we thought it would be fun to ask each other questions to give some background on the piece and get an understanding of each other’s experiences.

Caz to Doree: How did you choose Rani to be the subject of our video?

I first heard the basics of Rani’s story before we traveled to India. Every girl at Kranti has an incredible story of struggle and strength, which made it hard to choose, but something about Rani stuck with me, and I knew I would click with her, which was important because she’d be taking me on a day through her life. She’s 17, a really fascinating age for every woman — she’s a full-blown teenager and yet a woman. In so many ways, she is an absolutely typical teenager, which I knew could make for a relatable story, and yet she’s incredibly driven and grown-up. I think that dynamic is fascinating.

Doree to Caz: What was your first thought when I said I wanted to bring a Ronin* with us? How much did you hate me? 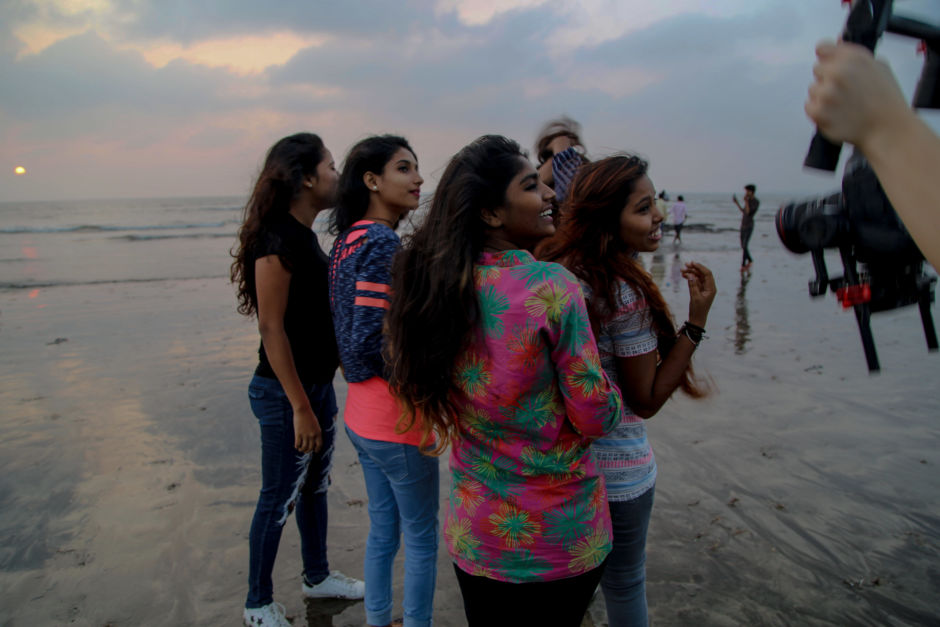 *A Ronin is a large and heavy stabilizer for the camera. We lugged one all around Mumbai, including into the red-light area.

Haha! I was not a fan of the idea at all and felt like it would be impossible for us to carry the camera gear, audio gear, plus the Ronin! With Doree being on-camera sometimes, I knew it would be especially hard to add a larger piece of equipment to our kit. But we got very lucky in that one of the Kranti volunteers joined us on a shoot day and helped carry some of our gear. We also had the Kranti girls who were very willing to take turns carrying the Ronin when I needed a break. We used the Ronin on the beach shots, and I love the aesthetic the Ronin helped give to these scenes by making it look like the camera was floating over the water.

Caz to Doree: What was your biggest takeaway from this experience? 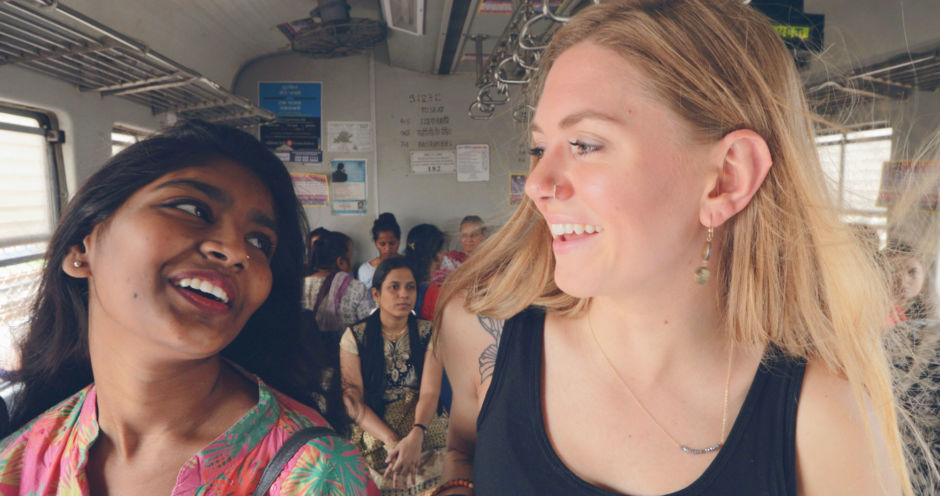 My biggest takeaway is a reinforcement of how important these stories are and what a responsibility I have to tell them right. When you ask someone to share their past, their present, and what they want for their future, you owe it to them to tell the world in a way that does that justice. It’s one reason I wanted to call Rani “a revolutionary.” She isn’t defined by where she came from, but she chooses to embrace that and do something bigger with it. That’s a story I want to share with the world.

Doree to Caz: What was your funniest moment we had in India? 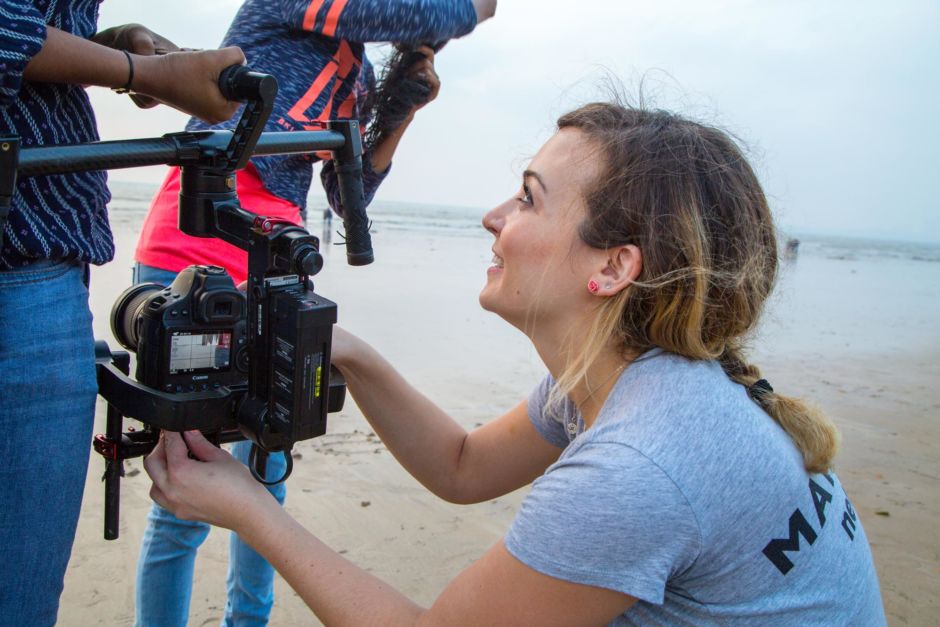 I think the funniest moment was on the very last day when we had only two hours before we had to leave to catch our flights. Doree was trying to do her final stand-up in front of the camera, but fate wasn’t cooperating with us that evening. First, someone started hammering really loudly next door, so it was too loud to film. Once that quieted down, we started filming again when the lightbulb in the hallway went out, and we were plunged into darkness! To make matters worse, we realized that we had locked ourselves out and the only key for the apartment was inside. Luckily we realized there was a small hand-sized hole in the grate of the door, so Doree was able to stick her hand in and unlock the door from the inside. Phew! I was rolling the camera this whole time, so it was fun to play this moment back later.

Caz to Doree: We edited this remotely — you in the US, me in the UK. What was the most challenging part of the editing process for you?

We’re used to working between time zones, but directing an edit remotely is a different beast. It was hard not to be side by side with Caz, so we spent countless hours screen-sharing via Skype and kept the process moving as smoothly as we could.

I think the hardest part about being so far away is not having someone there to share the small wins with. For example, when we received the musical score from Zachary Walter, it really helped glue everything together. I was running around my house in excitement but wishing Doree could have been here to share at that moment.

Doree to Caz: Had you ever filmed someone actually waking up before?

I’ve filmed a few morning scenes before, but it’s always been staged and never natural. Watching the sunlight filter in through the windows and being there to capture the morning rays gently wake up our main character was a moment that took my breath away. While filming those shots, I knew we had captured the opening sequence of the video.

Caz to Doree: What do you think makes us so aligned creatively? Where do you feel like we butt heads the most?

I think we align because we both see media as a way to tell stories in a responsible, engaging way. Surprisingly, that’s not as common as you might think. We probably butt heads most because Caz is a master editor who will throw any unnecessary moment to the cutting room floor, and if the edit were left to me, this film would be four hours long. So, I’m grateful for the ways we’re different because we need balance, and we also need this to be short enough that people actually sit down and watch it!

I think we have similar intentions and motivations with our work; we ultimately both want to tell meaningful stories that can have a positive impact. We both value the power of a good story and care most about the quality of what we’re creating over pandering to what will get the most views online. I think the place where we felt tension was in deciding how much Doree should be featured in the film. We had spent hours on the phone talking about how we wanted to ensure this didn’t seem like a “white savior” video and allow the young women we were featuring to be the main focus of the story. We sometimes felt pressure to make the video more “vlog” style as that could be a more popular structure. We both kept going back and forth on the approach but ultimately it was important for us to talk out the different ways we could have filmed this. I love the resulting balance of Doree as the host and guide for the series with Rani being featured as our independent main character of the story.

NewsSwimming With Humpback Whales in Tonga Is Awe-Inspiring, but How Sustainable Is It?
Tagged
Culture Female Travel India
What did you think of this story?
Meh
Good
Awesome