The gym was sucking me in, like a siren of spinning luring me from my hungover appointment with a Mimosa.

Waking up earlier than I’d wanted after a long night out in Chicago, my plan had been to continue the party with some Champagne leftover from the night before. But the in-room gym at the Swissotel’s Vitality Suite had other ideas. As I walked by the 200-square-foot fitness center — which sat between my bedroom and the living room in this 1,700-square-foot behemoth of a suite — I almost heard the gym equipment talking to me.

“Hey there, party boy,” it teased. “You gonna let a little hangover keep you from getting your workout in? I mean we’re RIGHT HERE. And we’re read…”

“Ok,” I responded as you might to friends pressuring you to go out on a Friday night you really meant to spend in. “Let me put on some clothes.”

A gym that shames you into exercise 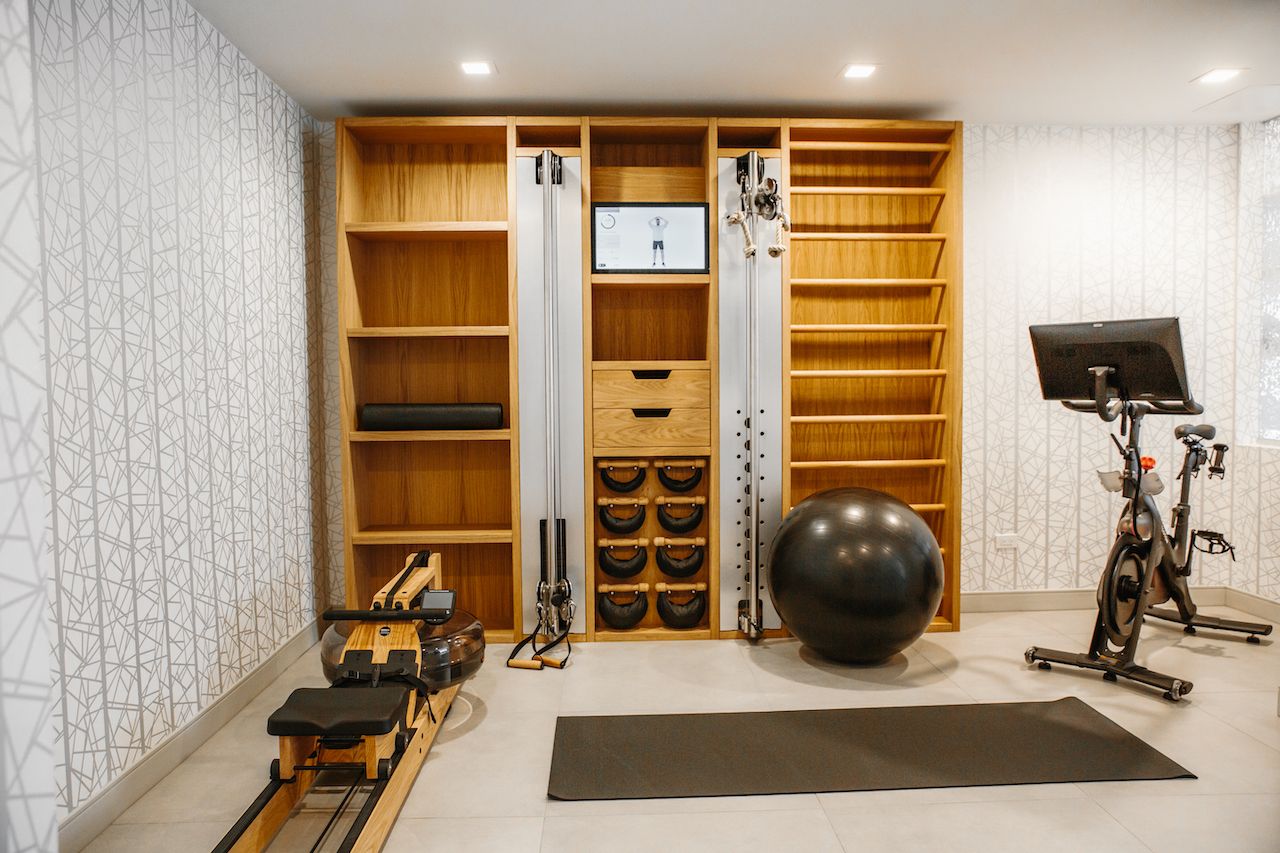 “Having a fitness center in your room will seduce you into working out,” says Diana Mestre, the Corporate Spa Consultant for Velas Resorts, who has in-room fitness centers in its luxury hotels throughout Mexico. She fully understood what happened to me at the Vitality Suite. “Otherwise you just get up and have breakfast, and that’s it.”

As wellness becomes an increasing focus of lifestyle both at home and away, hotels are competing to see who can keep people in the best shape while traveling. And in-room gyms seem to be the most effective way of doing that.

“When you travel, you’re off your routine. You’re out of whack,” says Armando Hernandez, the General Manager of the EVEN Hotel Miami Airport. “This helps you continue down the wellness path.” 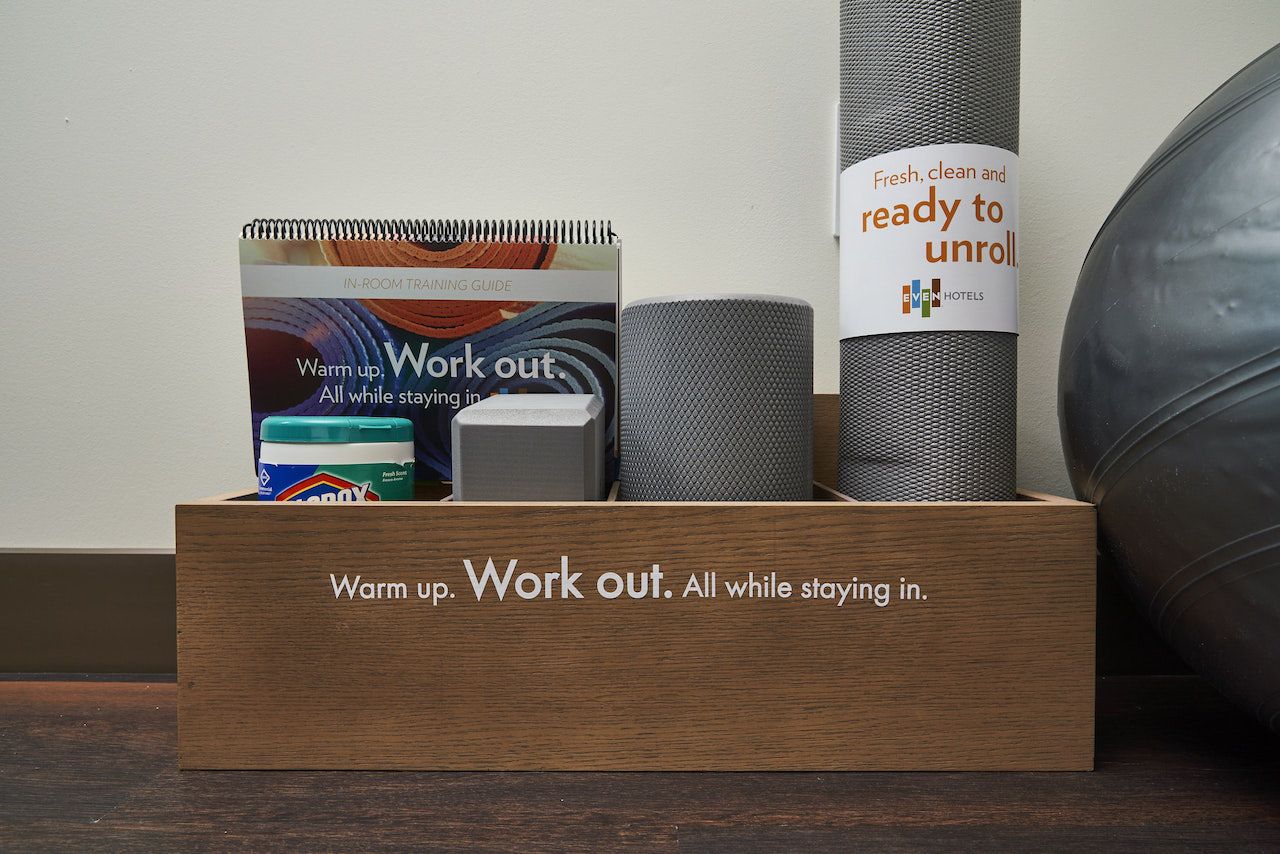 EVEN Hotels, whose in-room fitness concept is also in New York, Seattle, Pittsburgh, and other top US destinations, has brought the in-room gym to the masses, offering small-to-midsized gyms in each of its rooms. Those include resistance bands, yoga mats, physio balls, and, in some cases, spin bikes with on-demand classes on the television.

The hotel’s not subtle about encouraging guests to work out either, with a massive mural reading, “Your dedication is our inspiration,” on the fitness center wall. It’s the first thing you see at check-in, sitting right behind the front desk. Inside the gym, fit-looking people who opted to exercise outside their rooms occupy about half of its high-tech equipment.

“Sometimes you need some inspiration,” says Hernandez, smiling at the mural. “Because this hotel has wellness and athletics and the opportunity to work out, it inspires you to want to work out, to want to continue to have a routine where you’re working out, eating healthy.” 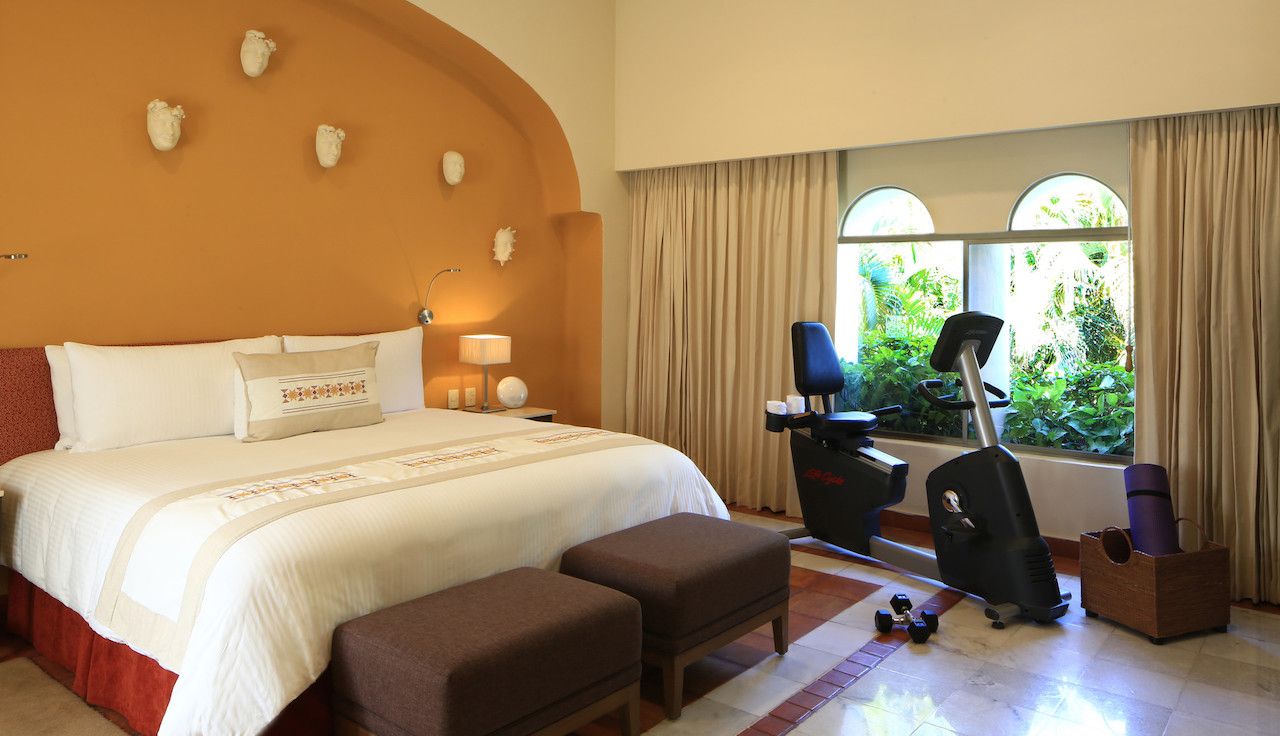 The idea of gyms in rooms isn’t radically new. The Kimpton Topaz in Washington DC has been offering in-room gyms since it opened in 2001, using them because they didn’t have room for a main gym in space-cramped Washington. Those included an elliptical, spinning bike, or recumbent bike, plus a yoga mat, blocks, and resistance bands.

Gyms have been in premium suites — like my room in Chicago — for years. And granted that room (which Swissotel graciously let me sample for the purposes of this story) is an over-the-top example and runs about $1,300 a night. But fitness suites have become an entire class of rooms, many only costing $30-50 a night more than standard ones.

That’s about the price of one class at SoulCycle.

The Loews Atlanta, for example, offers a Lifestyle Suite, which comes complete with Peloton bike. The Westin Los Angeles also has Pelotons in its Westin Workout suites, in addition to a special wellness pack with healthy treats and gym clothes you can borrow.

The in-room gym is spreading beyond the luxury sphere, into hotels far more accessible to regular people. Hilton recently launched its Five Feet to Fitness program in a handful of its usually staid locations, ranging from a DoubleTree at the Orlando Airport to the American Hotel in Downtown Atlanta. The program brings 11 different pieces of fitness equipment into rooms — think on-demand fitness videos, Wattbike spin cycles, and sand balls.

This signals a changing motivation in the traveling public, that even those who aren’t business travelers spending half their lives in hotels, or travel specifically for wellness, want exercise as part of their hotel experience.

“About 89 percent of travelers are not wellness travelers, so they’re not always immediately on board,” says Velas’ Mestre. “But wellness tourism is growing… faster than commercial tourism, and people are looking to improve health and wellbeing, but they don’t wanna be forced into a retreat-type program. This is allowing guests to try new things and work out in your room, and may change the course of your life. You can come back home and say that was wonderful, I’ll start my training routine.”

The point is, you don’t need to go to a fancy spa with mountain views and soothing music to get yourself onto a fitness path. Sometimes you just need motivation five feet from your hotel bed.

Back in the Vitality Suite, my friend who’d crashed in the living room after our long night out was shuffling past the gym, squinting away the early-morning Chicago sunshine.

“I don’t know what the hell is wrong with you,” he said, reaching in his jacket pocket for a cigarette. “There’s no way in hell you’d get me on an exercise bike right now.”

Still, curious about the gym, he put his coat down, wandered in, and started doing some stretches against the wall. Then he picked up a couple of weights, and did some short sets of curls and raises.

‘It sucks you in, doesn’t it?” I yelled from behind my headphones.

“Hmm,” he said, looking a little puzzled at the weight in his hand, as if he’d somehow gotten hypnotized into doing bicep curls. “Don’t ever think you’re getting me to do this again.”

WellnessThe Best Fitness Gadgets To Commit To a Healthy Lifestyle This Summer
Tagged
Wellness Epic Stays
What did you think of this story?
Meh
Good
Awesome