Jakarta is the capital of Indonesia and a place where you can find a variety of people from across Indonesia and abroad. The country’s motto, after all, is Bhinneka Tunggal Ika, or “Unity in Diversity.” People from all over have brought their culinary traditions and made the city an exciting place to eat. Perhaps because of this diversity, Jakarta’s own ethnic group, the Betawi, can get overlooked. But the people, and their food, have influences well worth noting.

The origin of the Betawi goes back to Dutch colonialism in the 17th century. Betawi are a mix of Sundanese, Javanese, Portuguese, Dutch, Arabs, Chinese, and other immigrants who came to Jakarta at the time, making them the latest formed ethnic group in Indonesia. Thus, their influences are significant, and these diverse ethnic groups that the Betawi are made up of influence many aspects of Betawi traditions and traditional food. 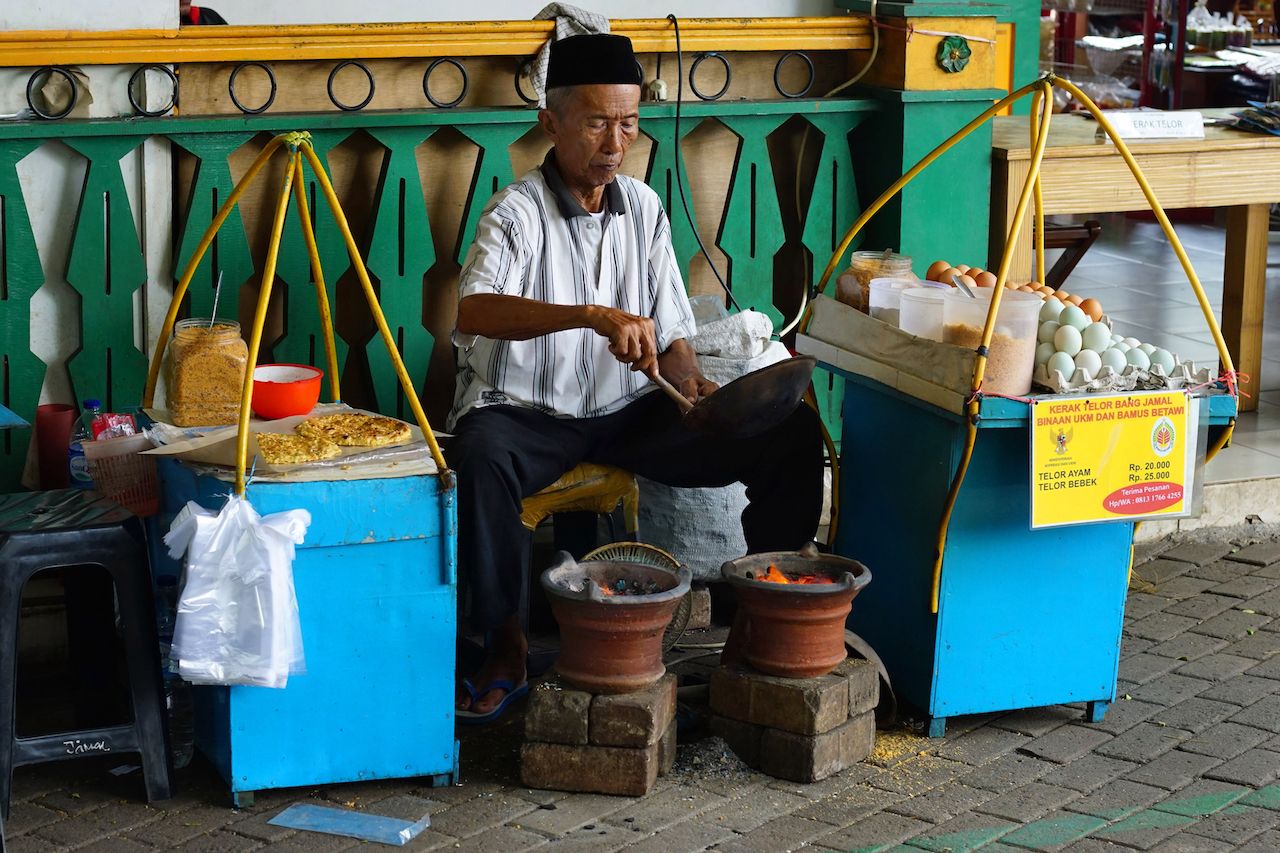 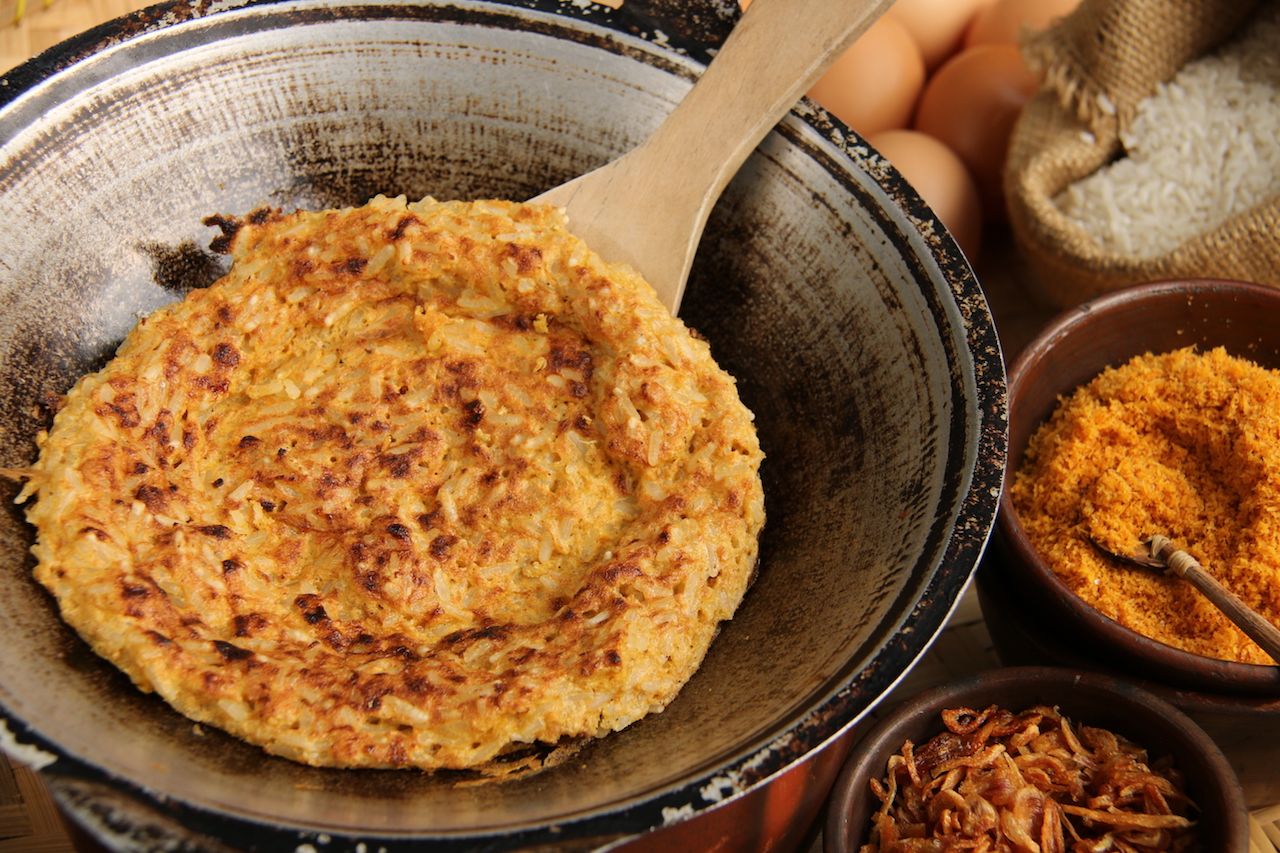 Kerak telor is a spicy omelette dish. It’s made with glutinous rice that’s cooked with egg and seasoned with ginger, salt, sugar, and aromatic ginger. It’s typically served with dried shrimp, fried shallots, and serundeng (fried shredded coconut) on top. Back in the colonial era, kerak telor was considered a privileged food that was only served to the colonial government and upper-class Betawi. Now, it’s considered a cheap snack and can be purchased from street-food vendors. 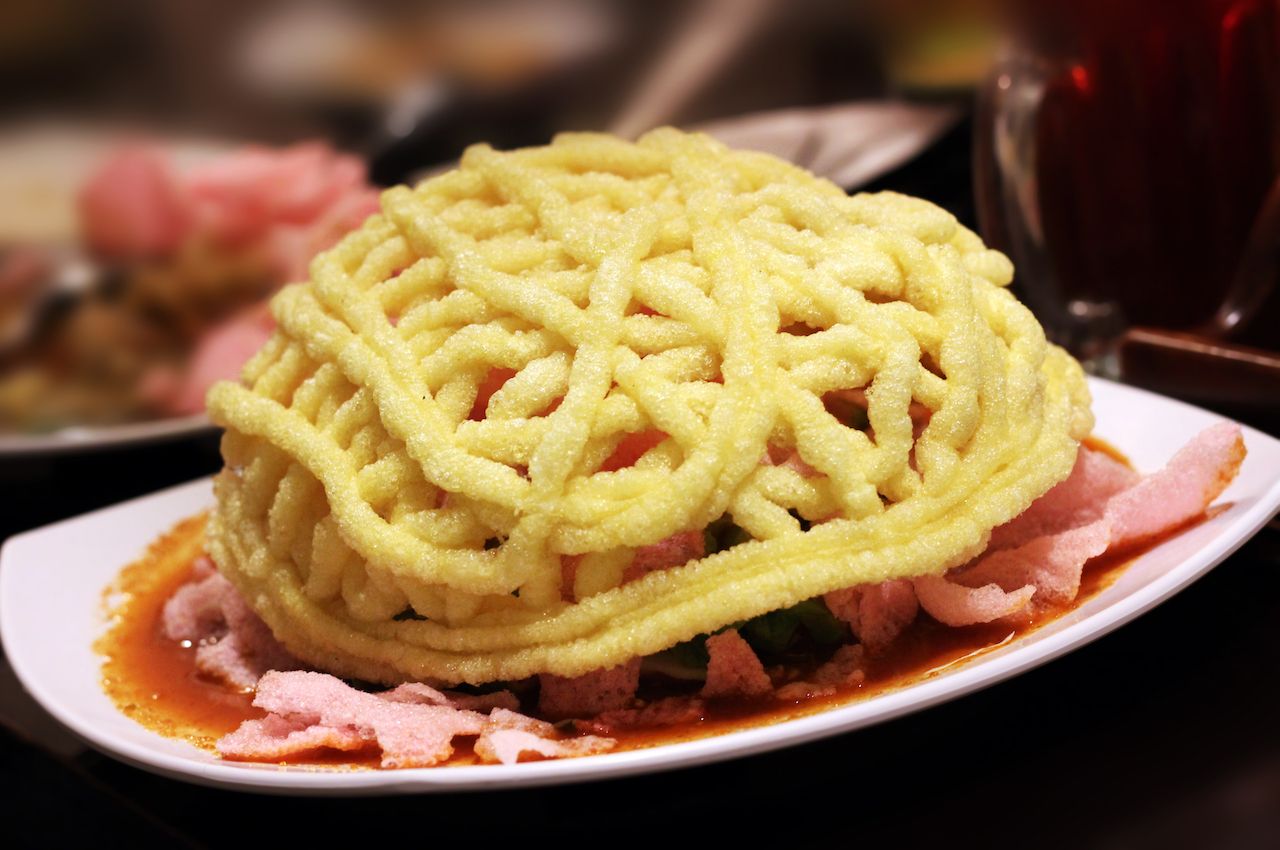 This is the Betawi’s version of a salad. It’s made with sprouts, tofu, lettuce, cucumber, pickled cabbage, and peanuts. Asinan Betawi is topped with a refreshing peanut, vinegar, and chili dressing, and it’s served with kerupuk mie kuning (yellow noodle crackers), which come from the Dutch. 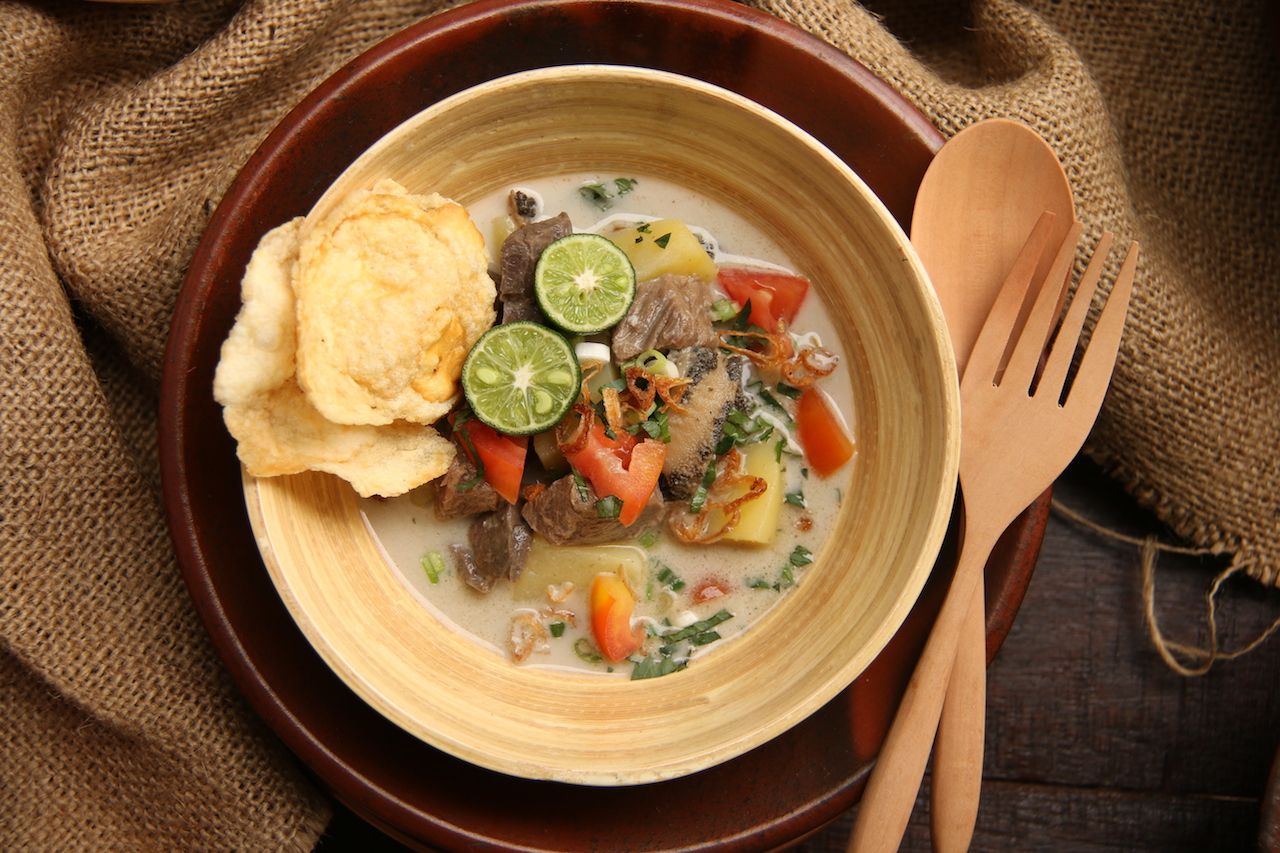 Soto Betawi is a soup made with beef, offals, fried potato, and tomato that’s cooked in a cow’s milk or coconut milk broth. It’s served with fried shallots, emping (fried chips made of Gnetum gnemon fruit), lime, cucumber pickles, and chili on the side. White rice normally accompanies the dish. 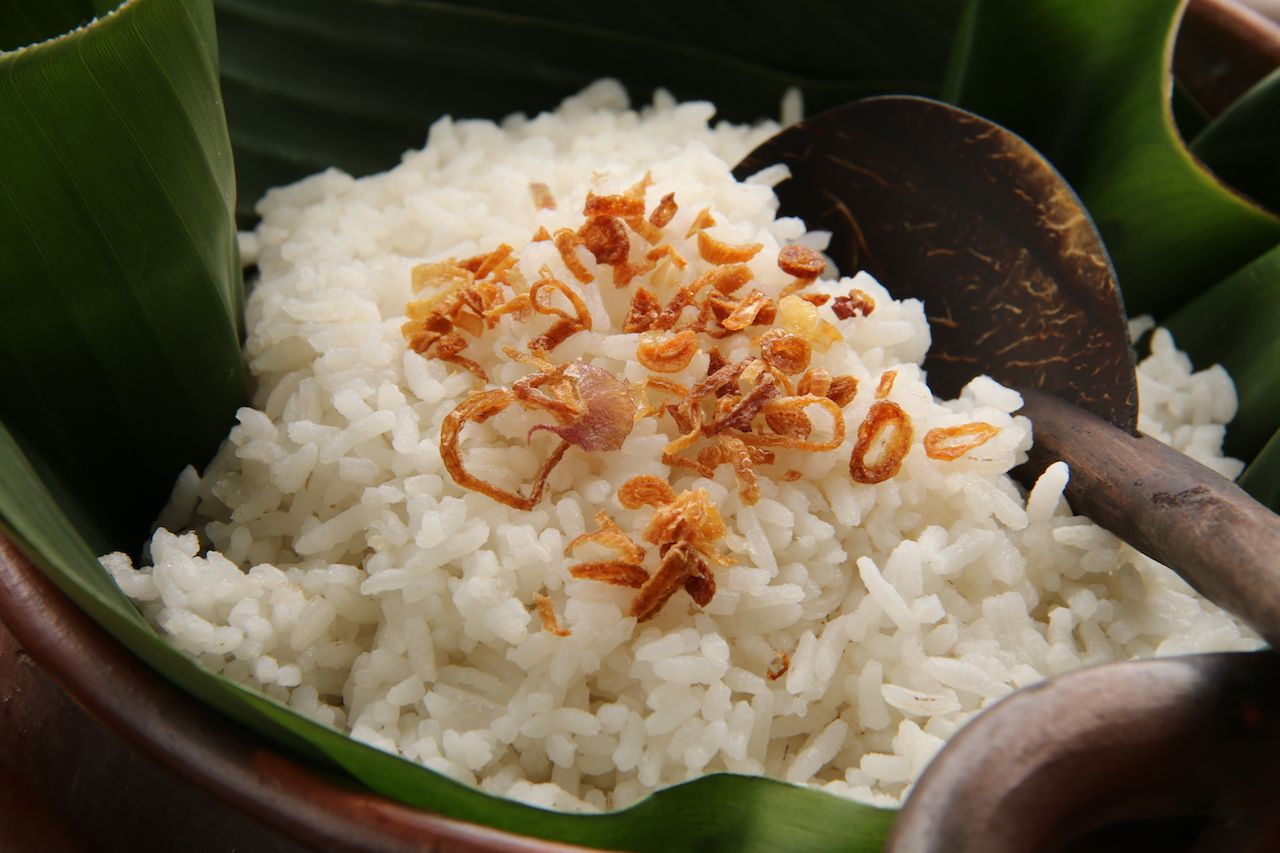 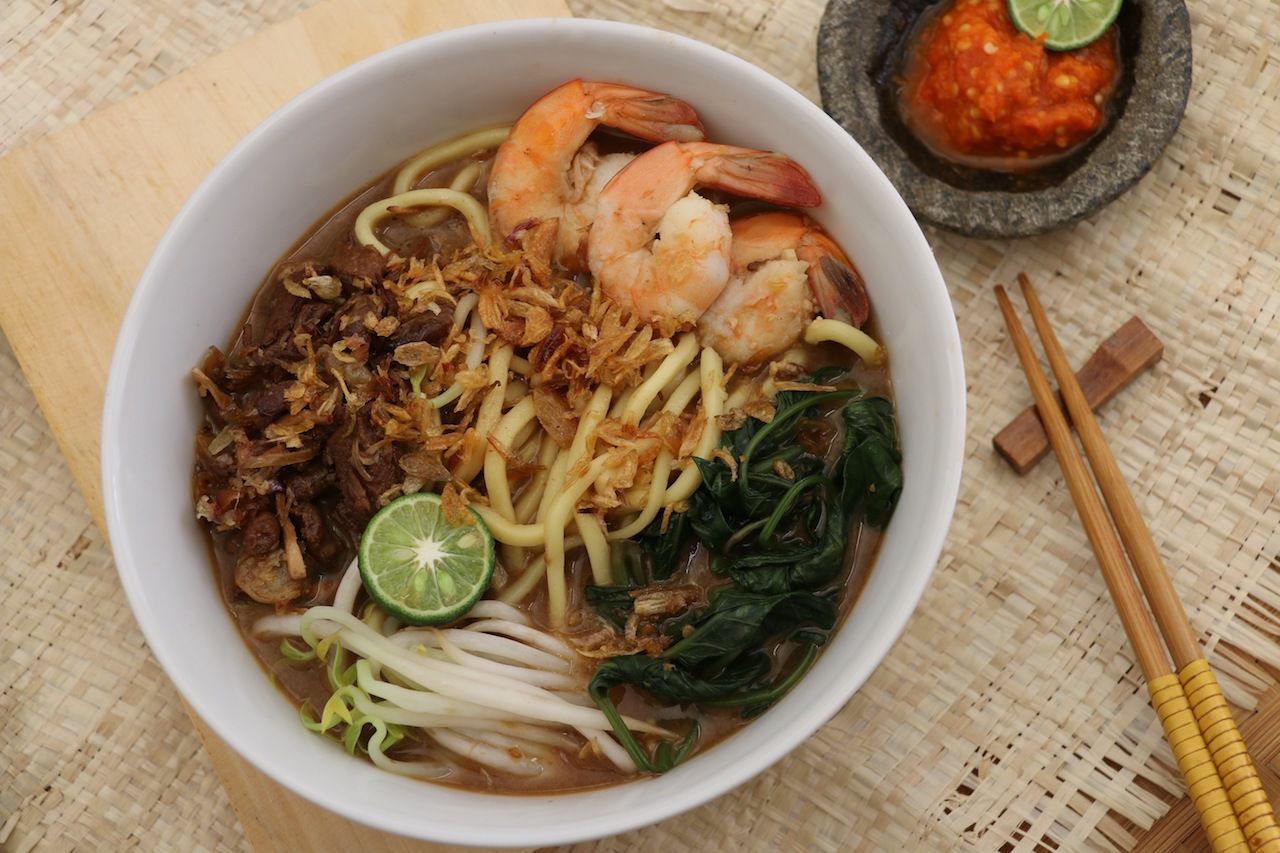 Mie kangkung is a chicken and noodle soup made with kangkung (water spinach), shredded chicken, and yellow egg noodles. It’s served in a thick sauce made with tapioca and either chicken or beef broth that’s seasoned with garlic and sweet soy sauce. It’s typically served with a sprinkling of fried shallots on top and chili on the side, although some places add bean sprouts, meatballs, and mushrooms as well. 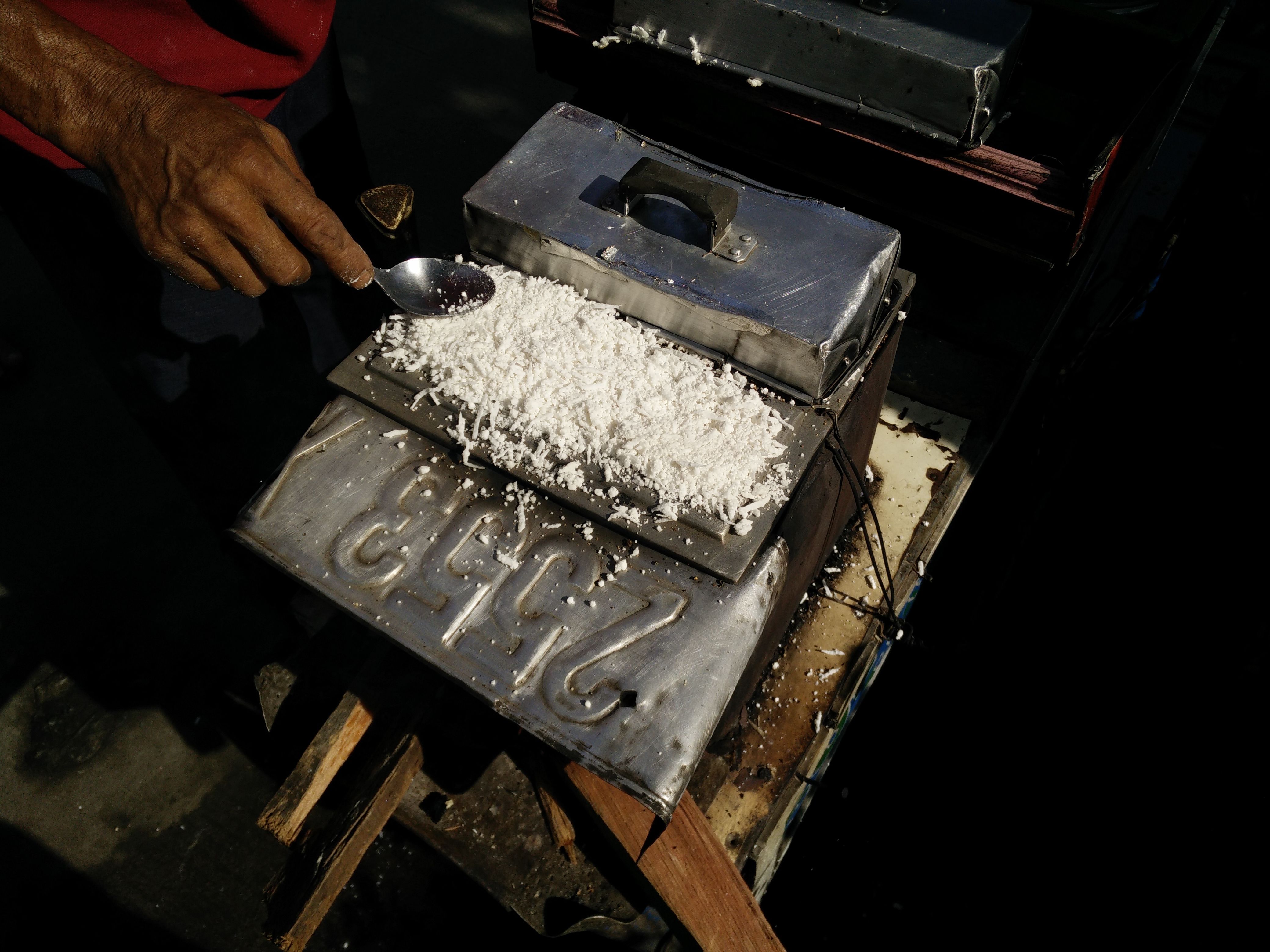 A traditional snack made from tapioca flour and shredded coconut. Kue means cake, and there are a number of different types. Kue rangi are spread thin and then cooked on a small steel griddle with a brown sugar and starch mix brushed on top. Order it from a streetside vendor and watch the process of making it yourself. 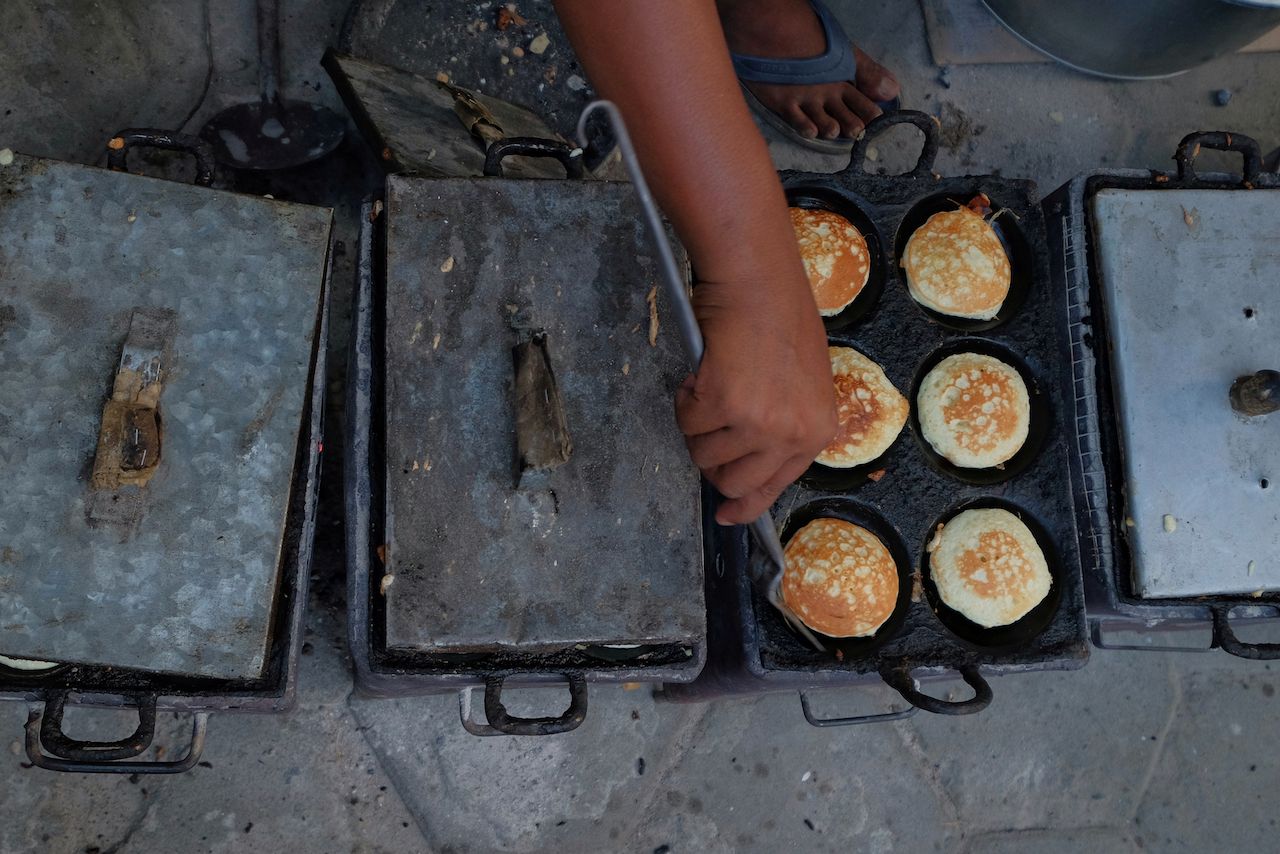 You can find this dessert in almost every traditional market in Indonesia, and there are various versions from Malaysia and Thailand. The most popular, however, is the Betawi’s kue cucur. Made with rice flour and palm sugar, kue cucur tastes sweet, a tiny bit savory, and has crispy thin edges with a soft middle. It’s an important dish in traditional ceremonies. 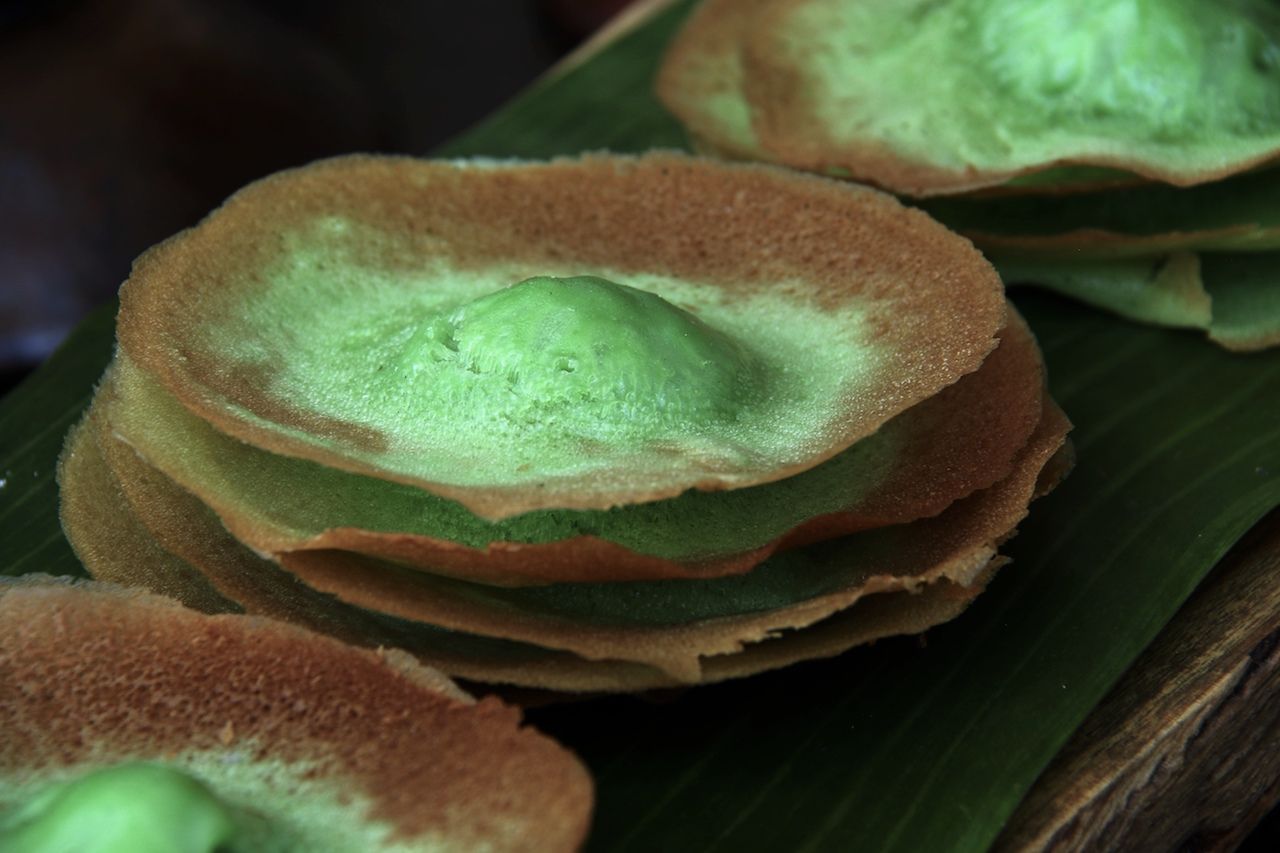 Kue ape is made with flour, rice flour, vanilla, coconut milk, sugar, and pandan, which gives the treat its aroma and green color. It’s cooked a frying pan to give it a round shape with crispy edges and a thick and soft middle. Kue ape are colloquially and famously known as booby cake because of the shape. You can typically find street stalls serving up kue ape in front of schools. 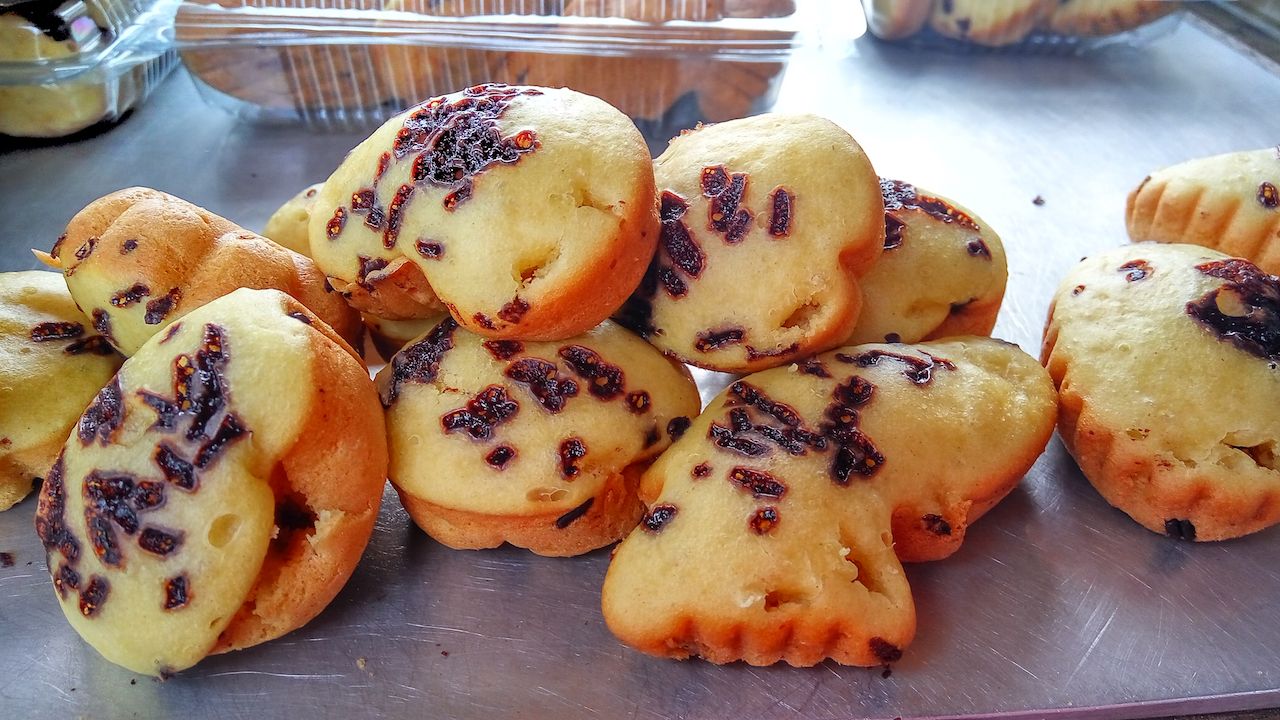 One of the most popular snacks in Jakarta, kue cubit is made with milk and flour as the main ingredients. The most popular version has chocolate sprinkles on top. The batter is baked on a steel molding that’s somewhat like a shallow cupcake tin, and it only takes a couple of minutes to cook. Kue cubits are similar to Dutch poffertjes in shape and color. They’re a popular small and quick snack (cubit means pinch, and refers to the small pinchable size). 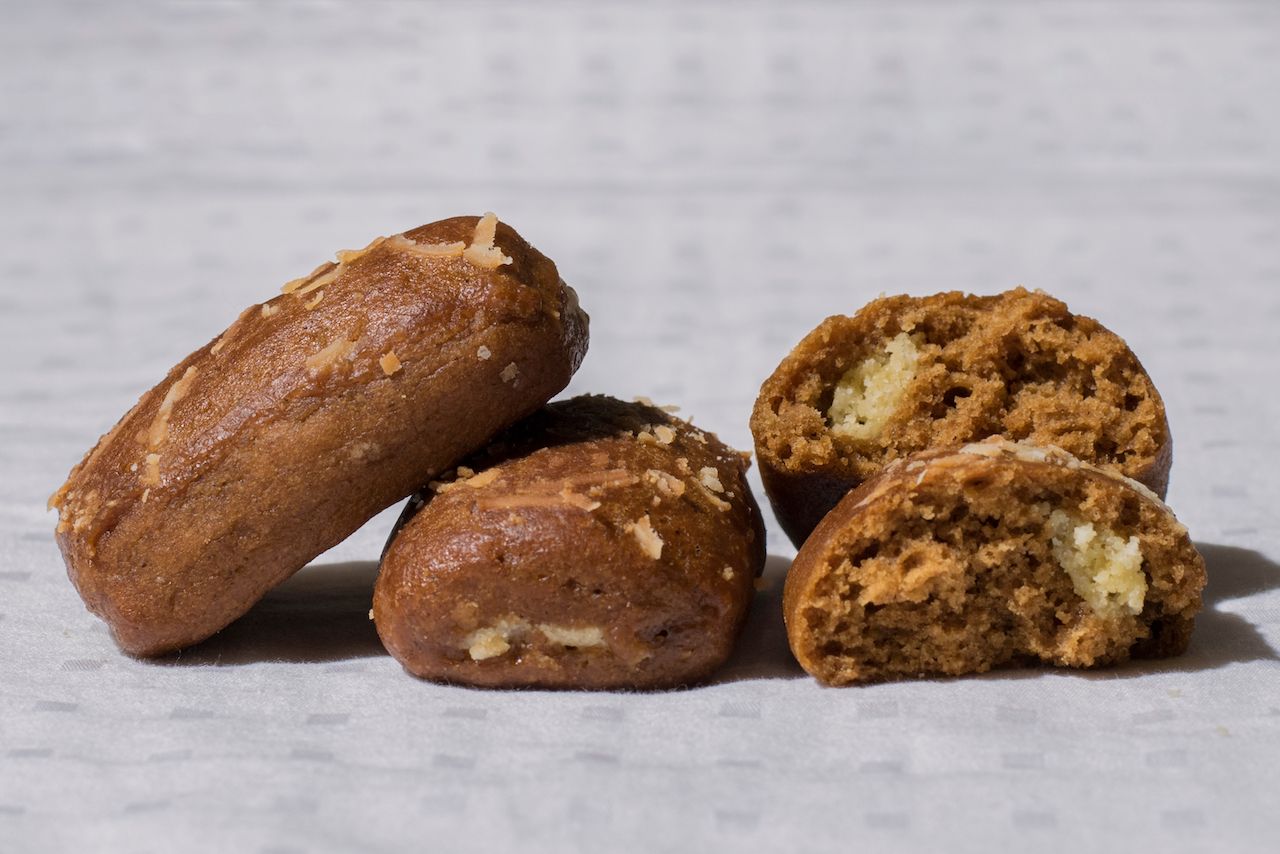 Roti gambang is a traditional Betawi bread made with flour and brown sugar. While the British have scones with their tea, Indonesians have roti gambang. The name is inspired by the shape of Betawi’s traditional musical instrument, the gambang.

The Thompson Zihuatanejo Will Make You Forget Mexico’s Better-Known Resort Towns
The Truth About Artificial Vanilla Extract (and Why You Should Always Splurge for Pure)
The Ultimate Food Tour of New Haven, the Birthplace of American Pizza
The 7 Best Old-School Italian Restaurants in Atlantic City
This Historic Castle Distillery Is the Best Place To Drink in Kentucky Bourbon Country