On a recent trip to Bar Harbor, Maine I came across a very unusual sighting. A sign outside of Ben & Bill’s Chocolate Emporium that said the establishment offered lobster ice cream. I thought at first that it was an ice cream which incorporated lobster gummy candies that you see all over New England or maybe some kind of generic sea salt flavor. Eager to satiate my curiosity, I stopped inside the shop and discovered that it’s filled with actual lobster meat. Such an unusual combination of savory and sweet flavors got me thinking about how experimental ice cream flavors have become in the past several years — ditching everyday vanilla and opting for spices, savory options, and even sometimes sprinkling in local ingredients — like lobster — that aren’t intuitive centerpieces of a dessert.

The lobster ice cream at Ben & Bill’s Chocolate Emporium is certainly one of the most innovative flavors I’ve come across so far.

“In the early 80s, a couple from New York came into Ben & Bill’s Chocolate Emporium and wanted chocolate peanut butter fudge which I didn’t have at the time,” Bill Coggins, one of the owners along with his brother, Ben, tells me. Bill told them to come back, and in the meantime made the couple a batch of fudge. They were thrilled.

“I joked, do we get a 10 rating now?” Bill says, “and the couple said no you get a 9 because there’s nothing with lobster.” Bill laughed and said, “Come back tomorrow and we’ll fix that.” He decided to make lobster ice cream for them as a joke but the couple loved it. Bill says he and his brother get a lot of ideas for new sweets to feature at the shop from customers. Since they make the majority of the candies and all of the ice cream from scratch, it’s easy for them to experiment with recipes.

I had to try the lobster ice cream for myself. Delicious, melted butter is the ideal partner for steamed local lobster, and flavors of the ice cream reflect that. It’s a butter pecan base ice cream made with real butter and fresh Maine lobster.

“We kept the flavor on the menu and once Paul Harvey, a well-known radio show host in the 80s, mentioned the odd flavor on air after visiting the shop on vacation.,” explains Bill. “It really became popular after that.” 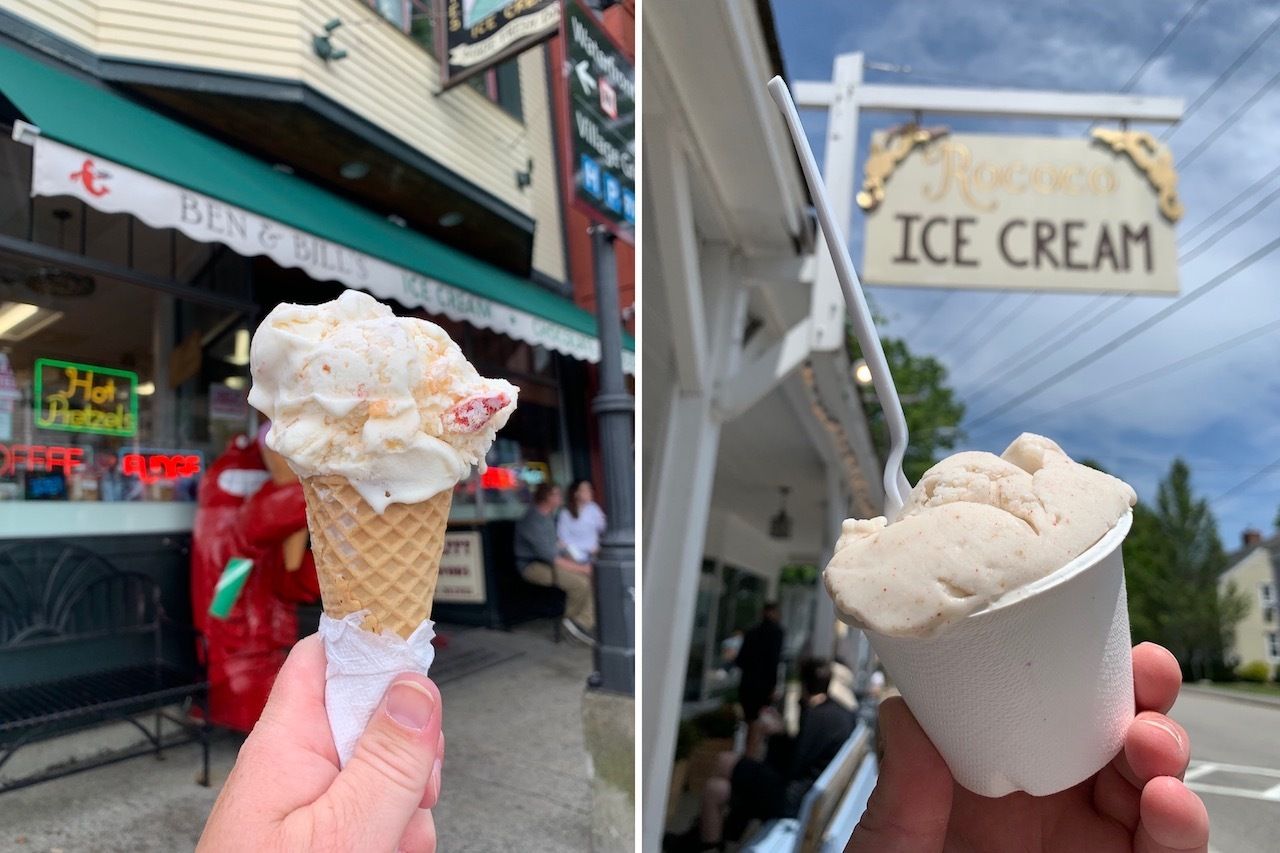 Ben & Bill’s Chocolate Emporium is just one among many specialty sweets shops innovating and experimenting in the realm of ice cream. Often, ice cream shops play with ingredients that reflect the local geography, creating desserts that are homages to the regions where they are available. For instance, in Gilroy, California, known as the garlic capital of the world, Marianne’s Ice Cream Shop whips up a chocolate-based garlic ice cream for the annual Garlic Festival in California’s Santa Clara County.

Travel to the United States’ opposite coast, and you’ll find ice cream flavors that seem equally as baffling but have found a loyal audience. Buffalo, New York, is known for its wings and the owners of Lake Effect Ice Cream, Erik Bernardi and Jason Wulf, came up with a flavor called Medium, Extra Creamy in 2019, a play on a popular wings order: medium, extra crispy (the medium refers to the wings’ heat level).

No, there’s not chicken scattered throughout or even blue cheese, but the wing ice cream packs a punch: The bright orange vanilla ice cream is flavored with Frank’s RedHot sauce. Lake Effect also sells a butter lamb flavor around Easter, a nod to the lamb shaped butter sculptures that are often a centerpiece of Easter dinner.

Rather than be revolted by these unusual ice cream flavors, most customers remain curious and open-minded — which gives ice cream makers more fuel and motivation to keep experimenting with new ingredients. Lauren Guptill, founder of Rococo Ice Cream in Kennebunkport, Maine, consistently invents delicious flavors that you won’t find anywhere else in the country.

“Sometimes I think my flavor creation process must be similar for all artists, musicians, and creative types. I think of my ice creams as works of art, and just like an artist is never truly done with a painting, my ice creams are also continuously evolving,” Guptill says.

These flavors grab people’s attention, but most of them transcend the level of marketing stunts — shops like Rococo Ice Cream have developed a loyal following. It doesn’t seem like people are exhausted yet by increasingly unexpected ice cream flavors that defy the limits of what a dessert can be. Instead, people crave the surprise of ingredients like cheese, peppers, and even lobster. Basic chocolate and vanilla might be classics that will never go away — but American ice cream innovators seem especially keen to prove that ice cream is capable of so much more.

Dessert15 Creamy, Fruity, and Indulgent Ice Cream Styles From Around the World
Tagged
Dessert Food + Drink
What did you think of this story?
Meh
Good
Awesome