A simple but powerful philosophy guided the work of Dr. John Mohawk, an activist, historian, and member of Seneca Nation: Sometimes you have to look to history to find the food that makes you feel best.

Mohawk, who lived on the Cattaraugus Indian Reservation, was a first-hand witness to the effects that displacement and reliance on processed food have on the Native American communities of western New York. He believed that revitalizing indigenous agriculture would be a step in the right direction, and he aimed to bring once-abundant white corn back to Iroquois land (the Seneca are one of six nations that make up the Iroquois people).

“He saw that our people were being affected by diseases like diabetes, heart disease, and all the complications that come with a poor diet,” says Peter Jemison, a member of Seneca Nation and a cousin of Mohawk, who passed away in 2006.

“We weren’t eating our traditional foods,” Jemison continues. “Mostly fast food was available on the reservation, and so people were eating mostly McDonald’s, Burger King, doughnuts, and the rest of it. Unfortunately, our people put on a lot of weight and experience all the effects of a poor diet.”

So Mohawk, along with his wife Dr. Yvonne Dion Buffalo, began the Iroquois White Corn Project. The project is an effort to re-introduce traditional white corn and white corn recipes to the region. In the 18 years the project has been running — with a brief interruption — it has been a qualified success.

A stable diet undone by destruction

For centuries, the native people in the Finger Lakes region of New York relied on ingredients known as the Three Sisters — squash, beans, and corn — as the foundation of their diet. The ingredients provided protein, fiber, and vitamins and were considered, according to Jemison, a “near-perfect” set of foods.

In the 17th century, white corn was still prevalent among the Iroquois people of the region. Women typically served as agriculturalists and cultivated the crops. But according to Jemison, in 1687, the French attacked the Iroquois in a dispute over fur trading. The French found nearly 1.5 million bushels of white corn when they arrived. In an effort to starve their enemies, the French burned the Iroquois’ corn stores and cut down all the new and growing corn in the fields.

Those who survived turned to their neighbors, the Cayuga (another of the six member nations of the Iroquois) who provided them with corn seeds. They moved to the northern end of what is now Seneca Lake and prospered for nearly 100 years.

Then, during the Revolutionary War, George Washington again attacked the Iroquois, believing they were feeding British forces. Washington ordered all their corn stores — around half a million bushels — destroyed. Over time, as the Iroquois were forced to relocate to different parts of the country, and women were encouraged to abandon farming by new Christian missionaries, white corn slowly disappeared from the diet. 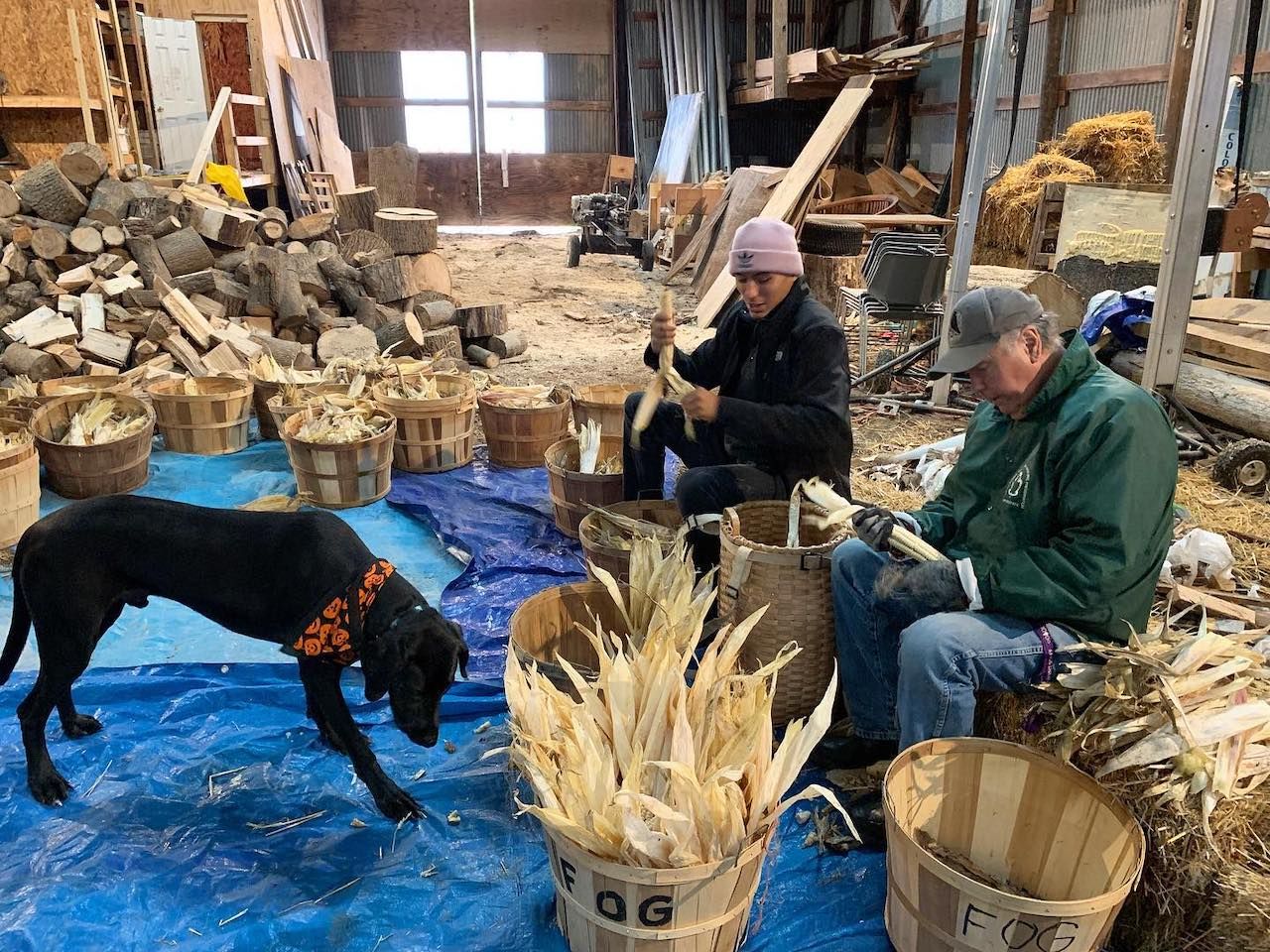 It wasn’t just invading armies and missionaries who drove white corn out of Iroquois favor. The corn itself is labor-intensive to prepare. It’s also not nearly as sweet as most modern, commercially available varieties.

White corn cannot be grown to the universal heights and sizes of commercial yellow corn, which means it can’t be picked by automation. It must all be picked by hand — a lengthy process that is only the beginning of a long journey from field to plate.

Each ear must also be de-husked by hand, hulled, roasted, and sometimes ground into cornmeal. It can sometimes take days to complete this process, making it far more complicated to turn into a meal than the simple canned corn one can buy at the store.

And for all that work, the end product doesn’t provide a gloriously sweet reward. White corn is more like hominy than yellow corn and has an earthy, nutty flavor. Typically it’s used in soups, salads, and vegetable medleys. White corn flour can also be used to make mash, masa, and some bread.

But like so many foods that aren’t bred for mass consumption, the reward isn’t so much in a satisfying flavor as it is in satisfying your body.

“Slow corn is a slow food,” Jemison says. “The body breaks it down slowly, it’s not high in sugar. Sweet corn is bred to be high in sugar, that’s why people like it. Our corn isn’t like that, we’ve been raising it for 1,000 years, and people have gotten away from it.”

Realizing the advantages white corn would provide their people, John Mohawk and Yvonne Dion Buffalo began growing it on the Cattaraugus Reservation south of Buffalo, New York. They urged others on the reservation to plant it in their gardens in an effort to encourage food sovereignty.

But when the couple died in 2005 and 2006, the Iroquois White Corn Project went on hiatus. A few years later, Jemison, who’d been heavily involved in the original project, restarted operations at the Ganondagan Historic Site, the only such site in New York State devoted to Native American history and culture.

“I knew [Mohawk] had the equipment in a cabin on the reservation,” says Jemison, who serves as the historic site’s manager. “So I asked if I could lease the equipment until I had the money to pay for something bigger and moved the project to Ganondagan.”

After moving the equipment required to cultivate the corn, Jemison and his team set up shop in an old farmhouse on the site and have been going ever since. They use a coffee roaster for much of the white corn roasting and hold an annual husking bee after the fall harvest to remove all but the three husks closest to the corn.

He’s set up a 501c3 called Friends of Ganondagan that employs young people looking for their first jobs. The project, Jemison says, helps the community in multiple ways.

“We’re helping people entering the job market learn the responsibility of showing up on time and being consistent,” he says. “And we are giving the public and our people a healthy food — everything from the people we obtain it from to the way we handle it.”

White corn catches on outside of the reservation 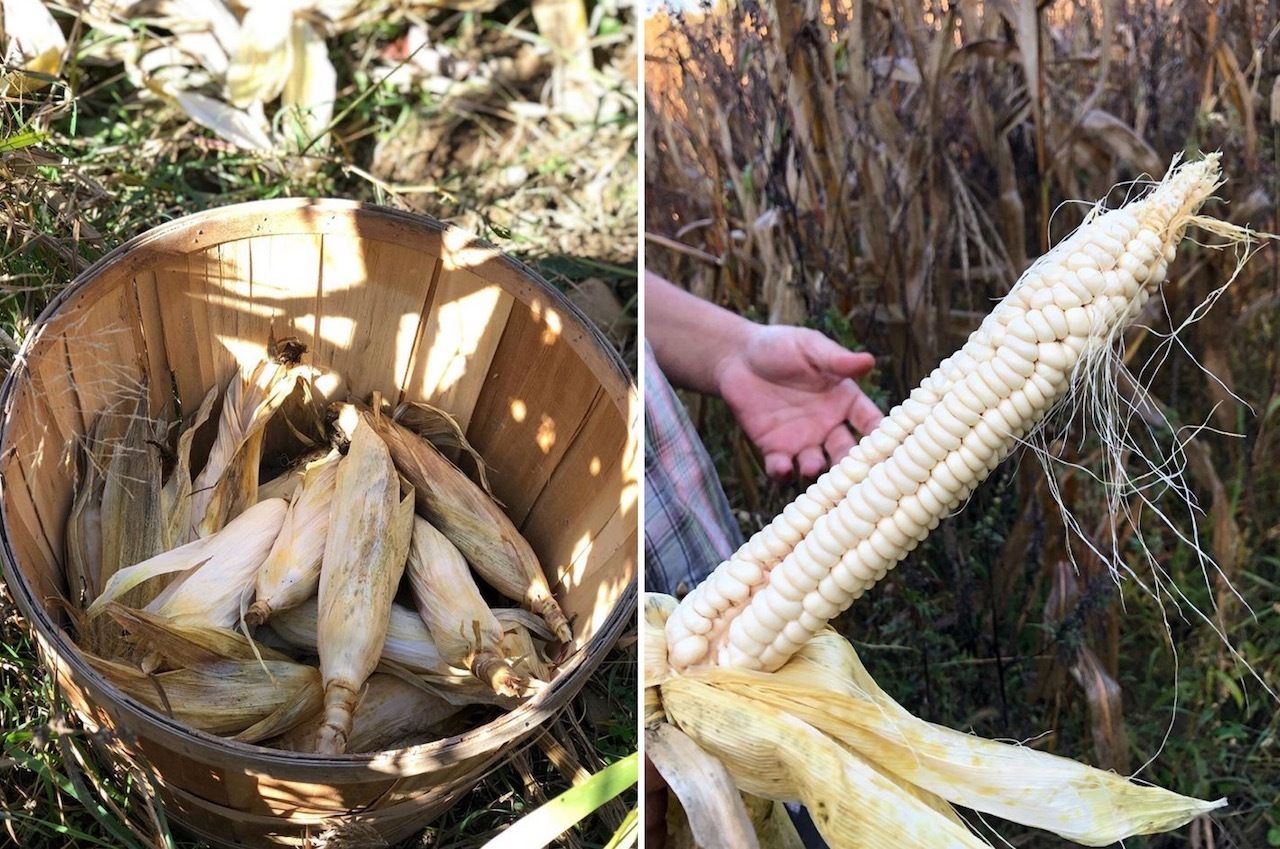 Currently, Jemison’s team is only cultivating about five acres, planting half the land at a time. It produces about 5,000 pounds a year, much of which is consumed by Iroquois people. But it’s also sold in local restaurants, at the regional grocery chain Wegmans, and in farmers’ markets as far away as New York City.

In nearby Canandaigua, Juan Gavara has found success using the white corn at his Mexican restaurants Rio Tomatlan and Ferona. A Mexican-American originally from San Jose, California, Gavara says the white corn has been the closest ingredient he’s found to replicating the flavors he finds south of the border.

Gavara uses the white corn flour to make tamales at his restaurants, as well as huaraches – a sort of masa flatbread grilled on the plancha and topped with beans, meat, vegetables, crema, and cheese. He’s also found success using white corn in soup and vegetable specials and has put on beer, mezcal, and tequila pairing dinners with Ganondagan using its white corn.

“I like working with Ganondagan because they have a purpose, and they actually have a good product,” Gavara says. “They’re trying to bring culture and trying to get people to recognize [white corn’s] importance. And they are able to pull off an ingredient like this, when they call somebody like me, it’s an honor, you know?”

But more important than artisan dinners and Wegman’s shelves, the Iroquois White Corn Project has spurred a renewed interest among the Iroquois to begin cultivating their historic food.

“It now has become a kind of a homegrown movement to see our own foods raised,” says Jemison. “This is going on locally, people are doing what they did for hundreds of years, remaking, gradually, that knowledge of that work that it takes to produce your own food. We wanted our own community to take up this process. And we’ve started to take back the task of raising food in our own territory.”

Culture11 Important Native American Heritage Sites in the US That You Need To Visit
Tagged
Culture Food + Drink New York, United States
What did you think of this story?
Meh
Good
Awesome