Finding an island in the middle of a metropolitan maze like London may seem a bit out there but there’s more to the River Thames than spotting seals. More than 150 islands span the length of the river that bisects the UK capital. While some isles are no larger than a double-decker bus, others can quite comfortably host entire communities of people. A handful of these islands fall within London’s limits, their inhabitants ranging from hairy German snails to Pink Floyd’s David Gilmour. Here’s a run-down of London’s unblemished, and often overlooked, islands. 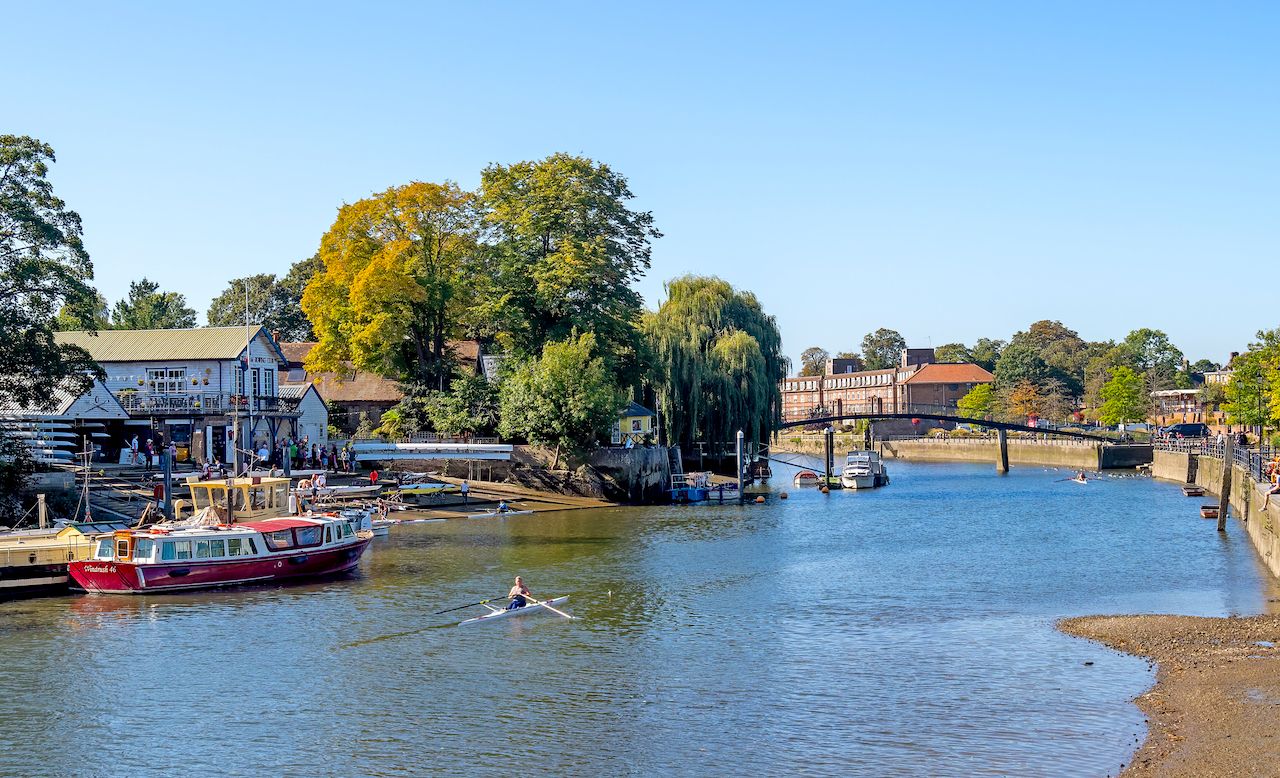 Located north of Molesey Lock and close enough to Hampton Court Palace that you can glimpse its signature turrets in the distance, Taggs Island is an obscure, overgrown islet. But what this tiny land lacks in size, it makes up for in personality. In 1841, entrepreneur Thomas Tagg rented out boats that ferried passengers to and from the island. He eventually built a gaudy hotel in its center. Fred Karno, the guy who discovered Charlie Chaplin, liked the island so much that he bought it from Tagg, revamped the hotel, and lured the Edwardian upper-crust to its shores. It remained a party hotspot for years until the hotel was pulled down in 1972.

Construction on the island is now off-limits. But that’s where it gets fun, as enthusiasts sidestepped this law by mooring their houseboats to the shores. Each houseboat boasts a small strip of land, used as gardens, which you can admire by foot or by cruising the lake that runs right through it. It’s pretty romantic, too, with willow branches grazing your arms as you bob past.

Keep an eye out for the Astoria, one of the island’s finest houseboats, designed to hold a 90-piece orchestra on deck. It’s now owned by Pink Floyd’s David Gilmour, who, naturally, uses it as a recording studio. 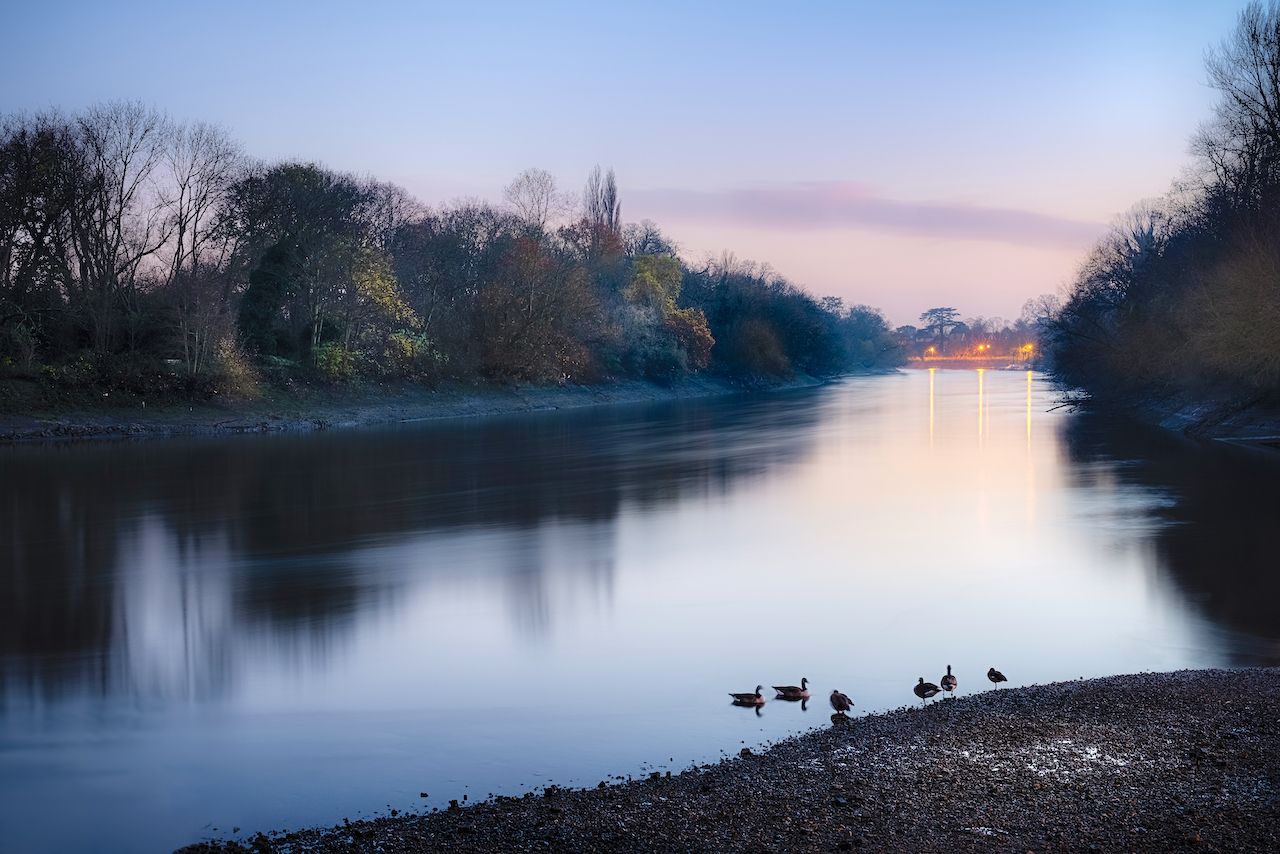 This island’s famous for two kinds of critters that live there: the German hairy snail and the two-lipped door snail, both of which happen to be endangered. Residents of the surrounding area of Isleworth, west of London’s center, are hellbent on preserving both the flora and fauna, so while visitors can board the floating boatyard that’s docked to the banks, you can only venture inland in the company of the London Wildlife Trust. It’s worth the hassle, as from April to June you’ll be able to see tree creepers, kingfishers, bats, and butterflies, as well as summer snowflakes in full bloom from poplars, willows, and sycamores. Just keep your eyes peeled and don’t step on any snails. 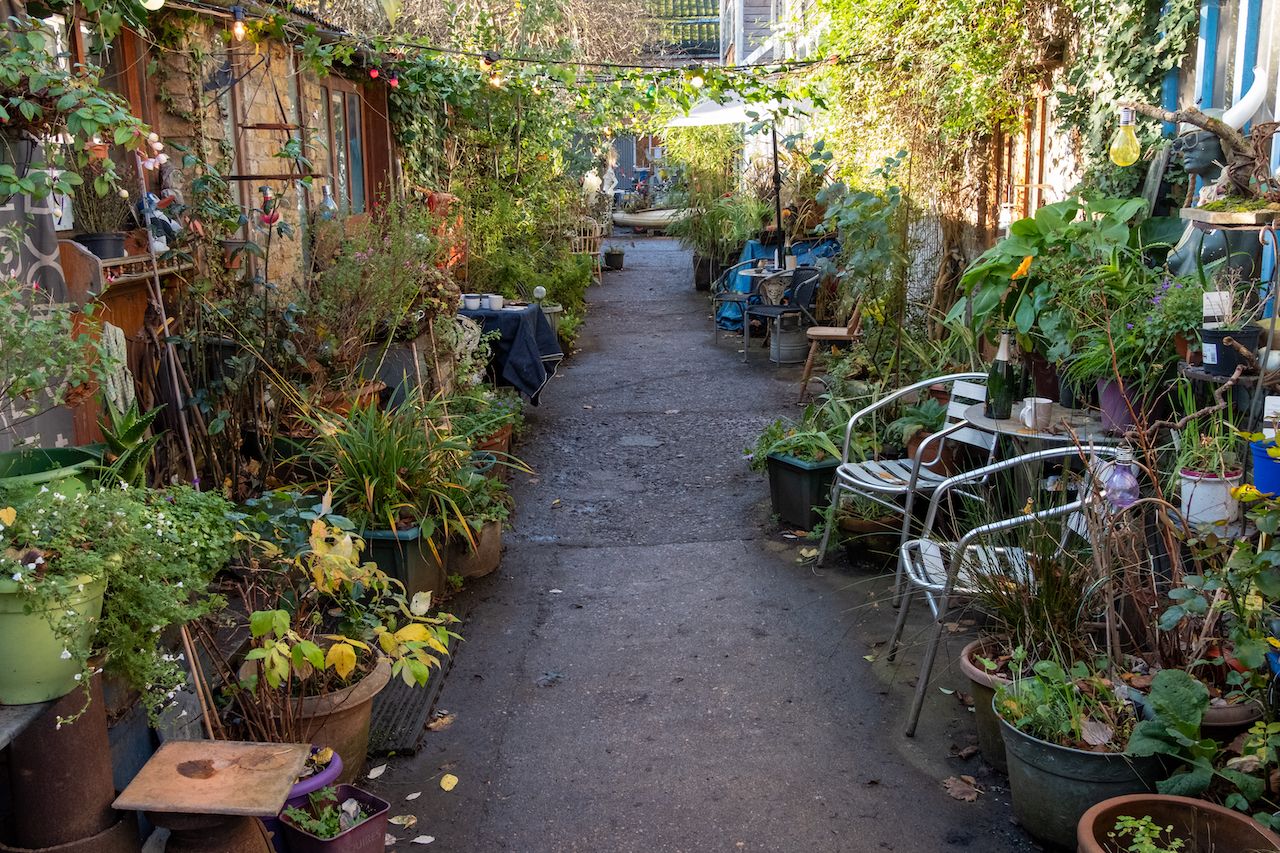 Save for a single footbridge, Eel Pie Island is completely cut off from the mainland. It’s part boat yard, part art colony — a nod to its ‘60s hippie phase. Eel Pie’s bohemian past lives on in its residents. Today, artists, painters, potters, and sculptors live and work in the studios peppered across its nine acres in the west London town of Twickenham. There’s a shortage of pies now, but back in the early 1900s they were served up by the boatload to all the people taking Sunday strolls across the island’s grounds.

Seventy years later, this same area was a hot gig spot for the likes of the Rolling Stones and Pink Floyd. Its rock and roll days are also over, but the island’s still making headlines. Most recently, comedian and writer Danny Wallace took over the island and declared himself its ruler. This short invasion ended when the police demanded, in earnest, that he return it to Queen Elizabeth II.

There are less extreme ways to nose around. Twice a year, the island’s residents open their doors to the public for special events. You can buy art, mingle with the locals, and maneuver your way around the many mannequin body parts scattered haphazardly across people’s backyards. 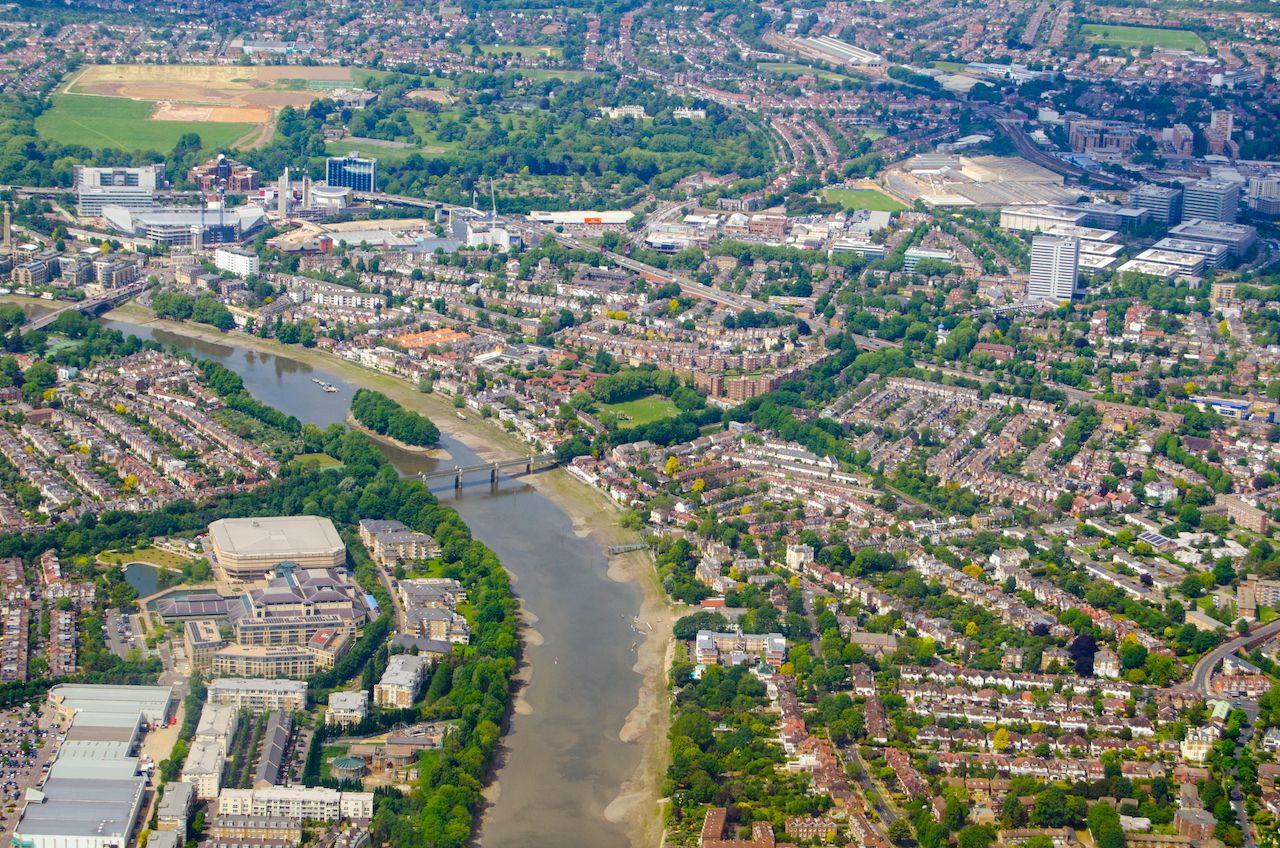 This eyot — or “ait,” as river islands are also called — has a fragile ecosystem. Its banks, made of mud thrown up by the river, are slowly eroding due to ever-changing tide levels, which have gradually reduced its overall size. It’s now considered a nature reserve, probably because in the 1900s the island’s willow trees were chopped down in vast swaths for the wicker basket trade. The island in west London is technically accessible by foot during low tides, though be warned: The Chiswick Lifeboat has bailed out many an explorer who has gotten stuck after the sudden rise in tides. So consider wearing wellies, as rubber boots are known on this side of the Altantic, or a bathing suit. 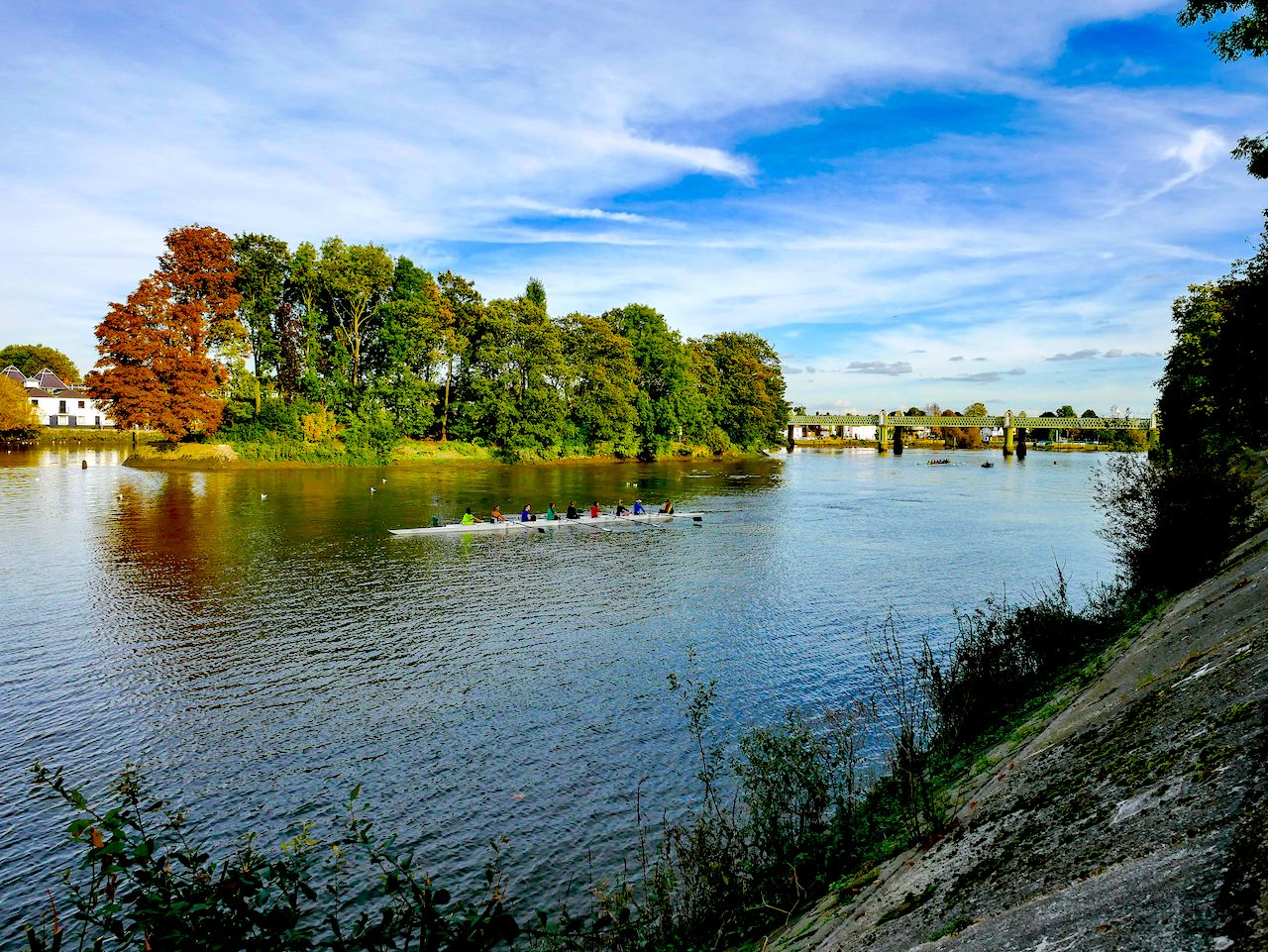 Oliver’s Island has a hefty population of birds, including herons, cormorants, and Canadian geese. Grab a pair of binoculars and head out to Richmond. It’s roughly one acre in area, although the grove of sycamore trees makes it seem much larger. If you’re not into bird watching, have a go at busting the island’s long-standing myth: a secret tunnel that leads all the way to the Bulls Head pub in Chiswick. It was supposedly built as an escape route for persecuted priests with the law hot on their heels — although no one has found it yet. Also, Oliver Cromwell purportedly took refuge on the island (hence the name), but we don’t see how you could disprove that theory. 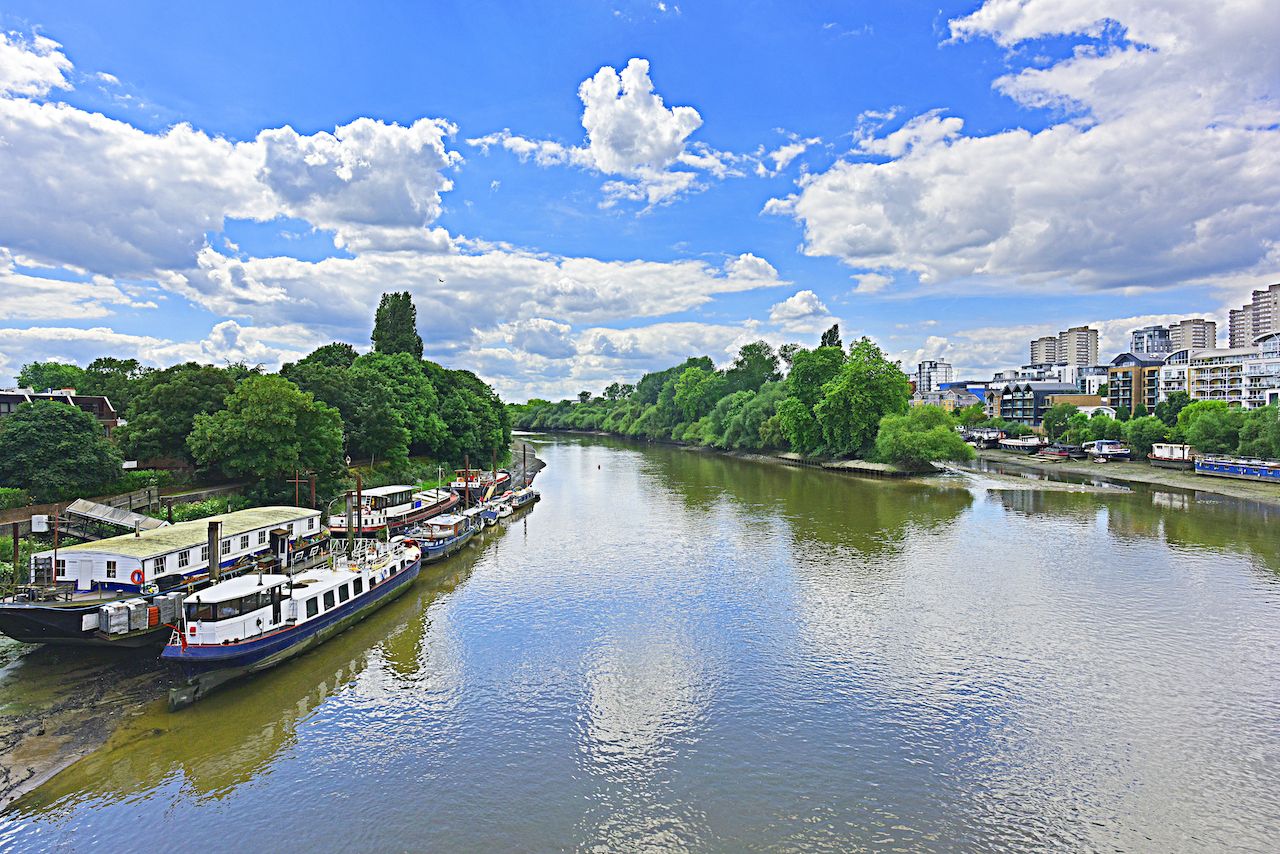 Nothing says Britain like pubs, and that’s exactly what this island, just across from Kew Gardens, was famous for in the 1700s. The Three Swans gained a rep for attracting anarchists making a nuisance of themselves, but who really were just typical Friday night bruisers who’ve had one too many. The complaints took their toll, though. The pub closed down, and nature took over. The ait is now a bird sanctuary, and the crumbling steps leading up to the establishment are the last remaining evidence of human interference, obscured by willows and alder trees.

While the government discourages visits to the island, nothing’s stopping you from checking out Lot’s Ait, located just south of Brentford, separated by an inch of water. The northern rut’s lush vegetation also provides a worthwhile view. 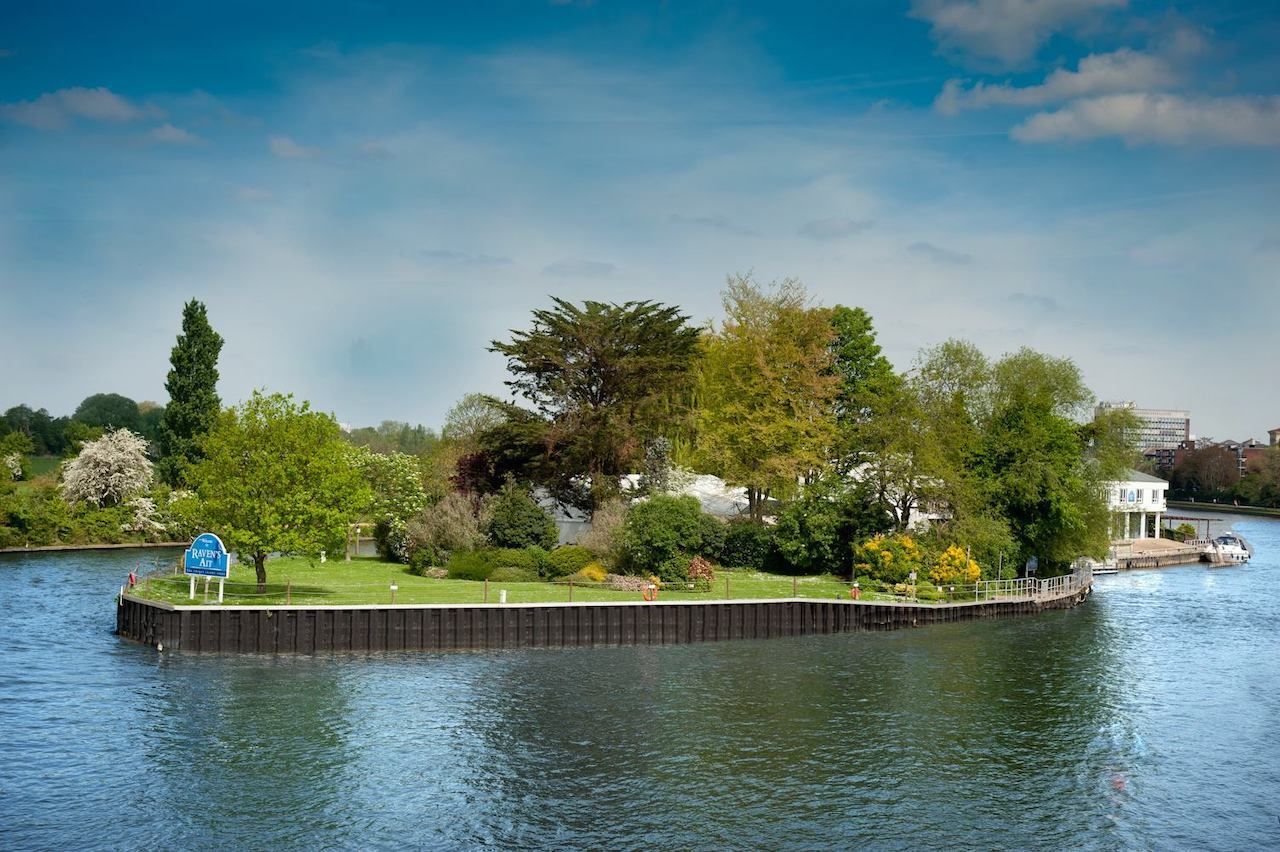 This is the one island you’re encouraged to visit year-round, provided your purse strings are loose enough. Also known as Love Island, Raven’s Ait is a two-acre secluded retreat in Kingston. The island hosts private events, massive parties, and weddings. During the summer months, there are barbecues, outdoor movie nights, and beer festivals. If you want to splurge, you can even rent the whole island for yourself, Gatsby-style. Getting there isn’t a problem, as there’s a ferry that whisks people over on the regular.

As for reaching the rest of the islands, the fun begins where the pavement ends. You can easily rent out paddle boards, kayaks, motorboats, and row boats from the countless boat hire services dotted along the river. A good starting point is Taggs Island; from there follow the glistening strip all the way down to Chiswick Eyot. It takes a couple of hours but you’ll knock out every other island in between.

The ultimate rainy day tour of London’s museums
Tagged
Beaches and Islands Wildlife London, England
What did you think of this story?
Meh
Good
Awesome