London leaves a lot to be desired when it comes to weather. More often than not, you can expect a little drizzle, sometimes leaving your plans for a cruise along the River Thames, a stroll along the South Bank, or a picnic in Hyde Park thwarted. But the good news is that — thanks to its huge selection of world-class museums, many of which are free for visitors — the UK’s capital isn’t a bad place to spend a rainy day.

In our ultimate rainy tour of London’s museums, we’ll have you gawping at animatronic dinosaurs, flying through space in Apollo 11, and clambering aboard a double-decker bus from the 1800s — all within a single, jam-packed day tour that starts in the award-winning science and natural history museums of West London and finishes at the iconic National Galleries of Trafalgar Square.

Start your museum tour in the heart of one of London’s most glamorous neighborhoods, South Kensington. South Ken is well known for its period architecture, fantastic restaurants, and endless boutique and designer shopping opportunities, but the real reason visitors flock here is for the chance to experience three of the city’s best museums: the V&A, the National History Museum, and the Science Museum — all of which happen to be within walking distance from one another, so you won’t get drenched. 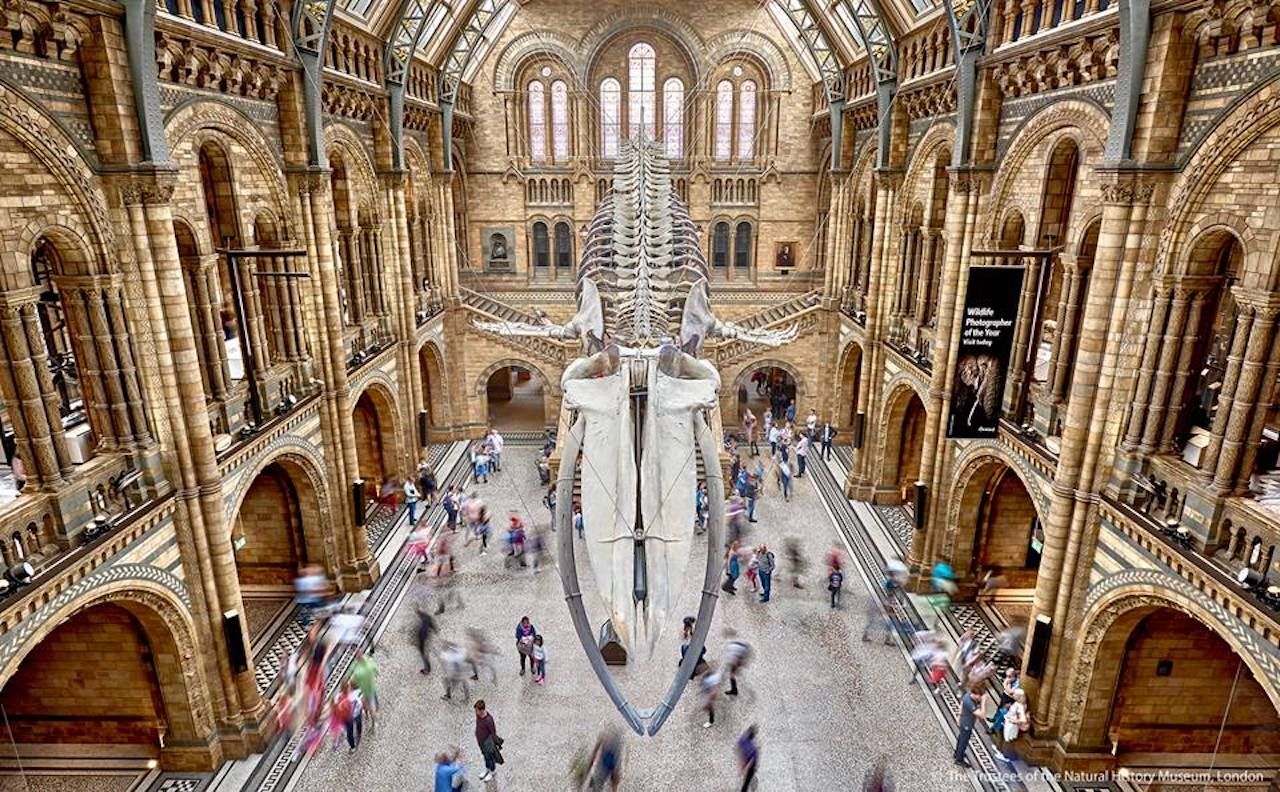 Beat the crowds and arrive at the magnificent National History Museum — home to over 80 million skeletal, fossil, and mineral specimens from around the natural world — as it opens its doors at 10:00 AM. Start off by visiting the Hintze Hall where you’ll find the famous 4.5-ton blue whale skeleton that once stood in the museum’s entrance.

From here, choose from either the Darwin Center — home to 28 million insects and 10 million plant records — or the Aurora Collection, a dazzling display of the world’s largest collection of precious stones, including the biggest and most richly colored emerald ever found. If you’re traveling with kids, don’t miss the dinosaur gallery where an animatronic T-rex, as well as 60-million-year-old fossils and larger-than-life Scolosaurus and Triceratops displays, will leave the little ones mesmerized.

Bonus tip: If you happen to be visiting on the last Friday of the month, check out the museum’s “Lates” events where, as well as being able to explore the museum after hours, you can attend free guided tours, talks, and events. 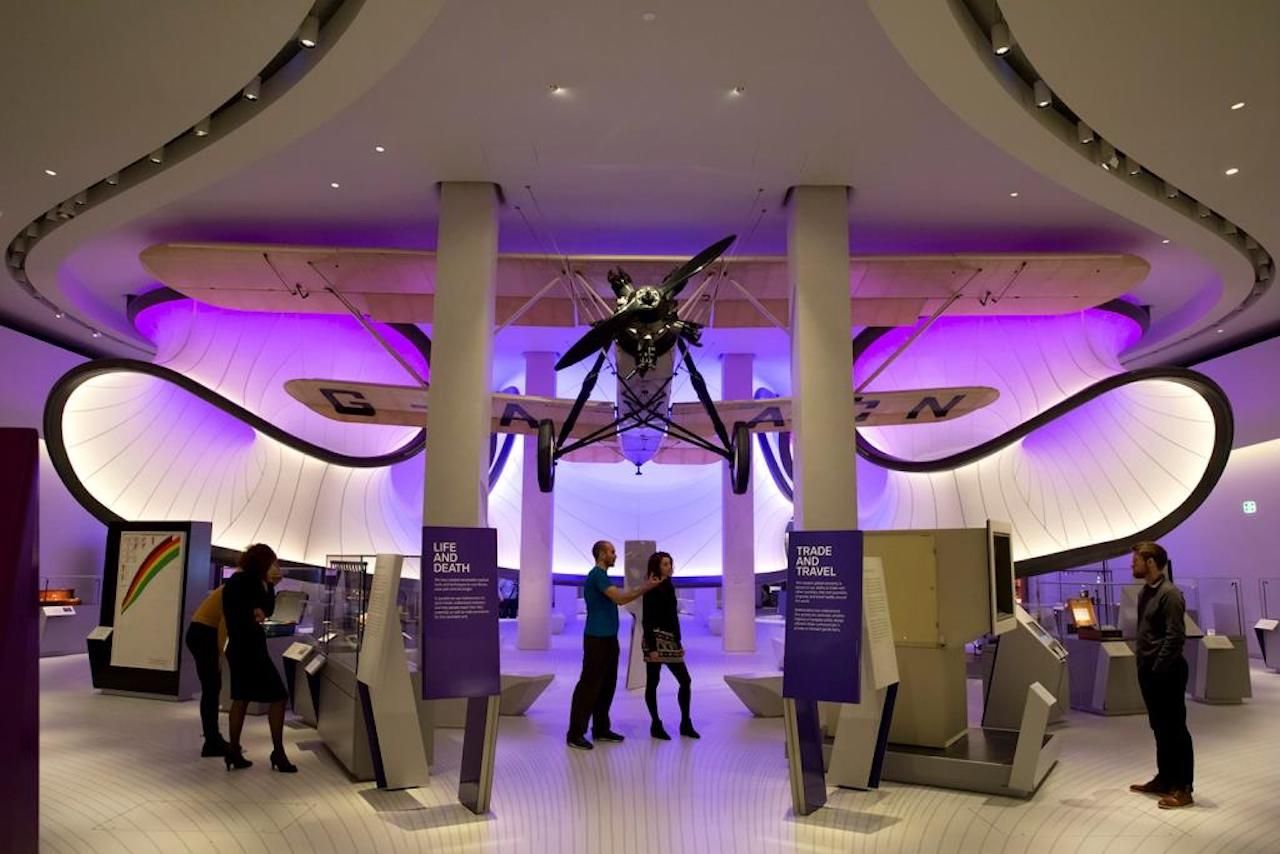 Just a couple minutes’ walk from the National History Museum is the award-winning Science Museum and the V&A (Victoria and Albert Museum). If you’re into everything and anything to do with science and technology, then head straight over to the brilliant Science Museum. Start off by exploring the ground floor, home to the famous Exploring Space gallery, which features an impressive selection of satellites, probes, and space rockets, including a replica of the Eagle, the lander that took astronauts Armstrong and Aldrin to the Moon in 1969. Then, at 1:00 PM, make your way to the third floor for your 40-minute free guided tour of the Flight Gallery, a hall filled with hot air balloons, gliders, and aircraft, including the Gipsy Moth, which Amy Johnson flew from London to Australia in 1930. 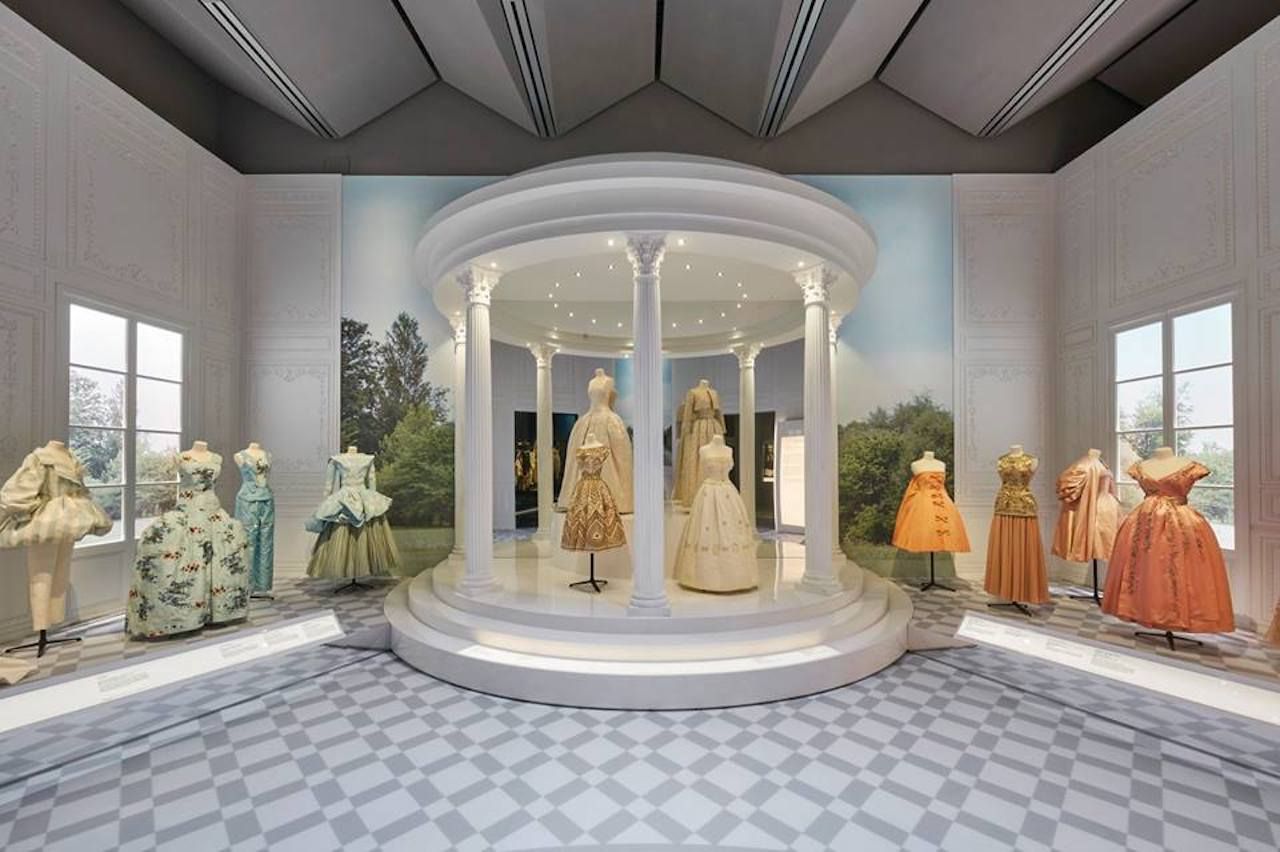 If it’s fashion, textiles, and design that speak to you, then opt for the V&A instead. With over 100 galleries to explore, you’ll need to prioritize. We recommend taking the free “introductory tour” at 12:30 PM, which will give you an overview of some of the museum’s most precious collections, as well as the building’s fascinating history. If you choose to go at it alone, be sure not to miss the Jewellery Gallery (a dazzling collection of over 3,000 necklaces, bracelets, and earrings from the ancient world to the present) and the British Galleries (a lavish display of priceless furniture pieces that showcase the best of British design between the 1500s and 1900s).

Before you leave the West for more museum exploring in Central London, stop by the beautiful Refreshment Rooms inside the V&A, which serve a wonderful selection of tea and coffee, freshly baked cakes, and farm-fresh lunches.

Bonus tip: Like the National History Museum, the V&A and the Science Museum both offer after-hour visits and special events once a month. Check out their schedule here and here. The V&A also stays open later on Fridays.

Whilst you could easily while away the whole day gawking at T-rex and priceless jewelry pieces in South Kensington, if you want to get in as many museums as possible in one day then you’ll need to jump on the central line to Trafalgar Square. Here, as well as iconic monuments like Nelson’s Column and St. Martin in the Fields, you’ll find another cluster of London’s best-known museums: the National Gallery, National Portrait Gallery, and London Transport Museum. 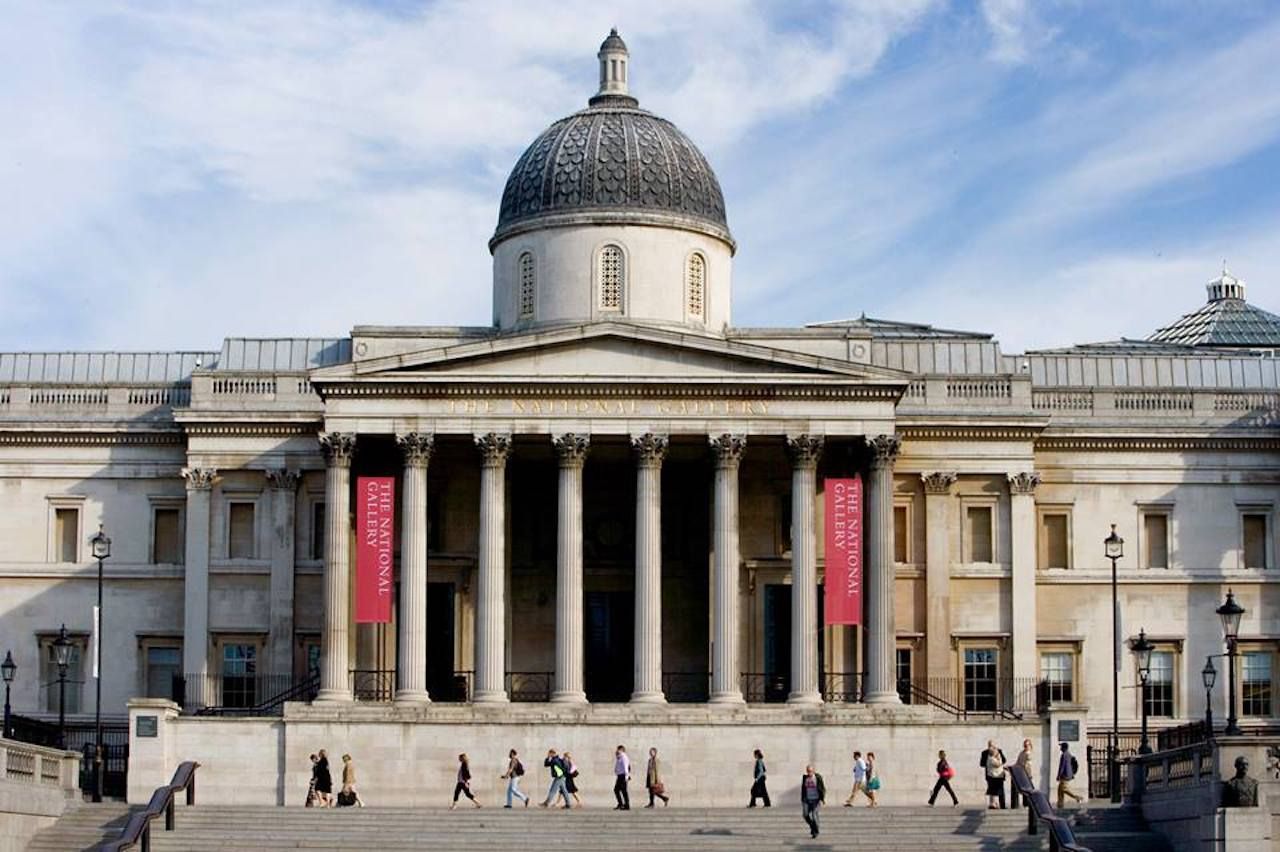 Arrive at the National Gallery — a stunning 1800s building home to over 2,000 masterpieces from the likes of Leonardo da Vinci, Claude Monet, and Vincent van Gogh — just in time for the one-hour guided tour at 2:00 PM (Monday-Friday only). Guided by volunteer historians and art aficionados, this free tour will give you a great overview of some of the gallery’s most important works. If you prefer to explore solo, don’t miss the Eastern Rooms where works by world-famous British artists John Constable and JMW Turner, as well as masterpieces by other Impressionists such as Monet and Renoir, are displayed. 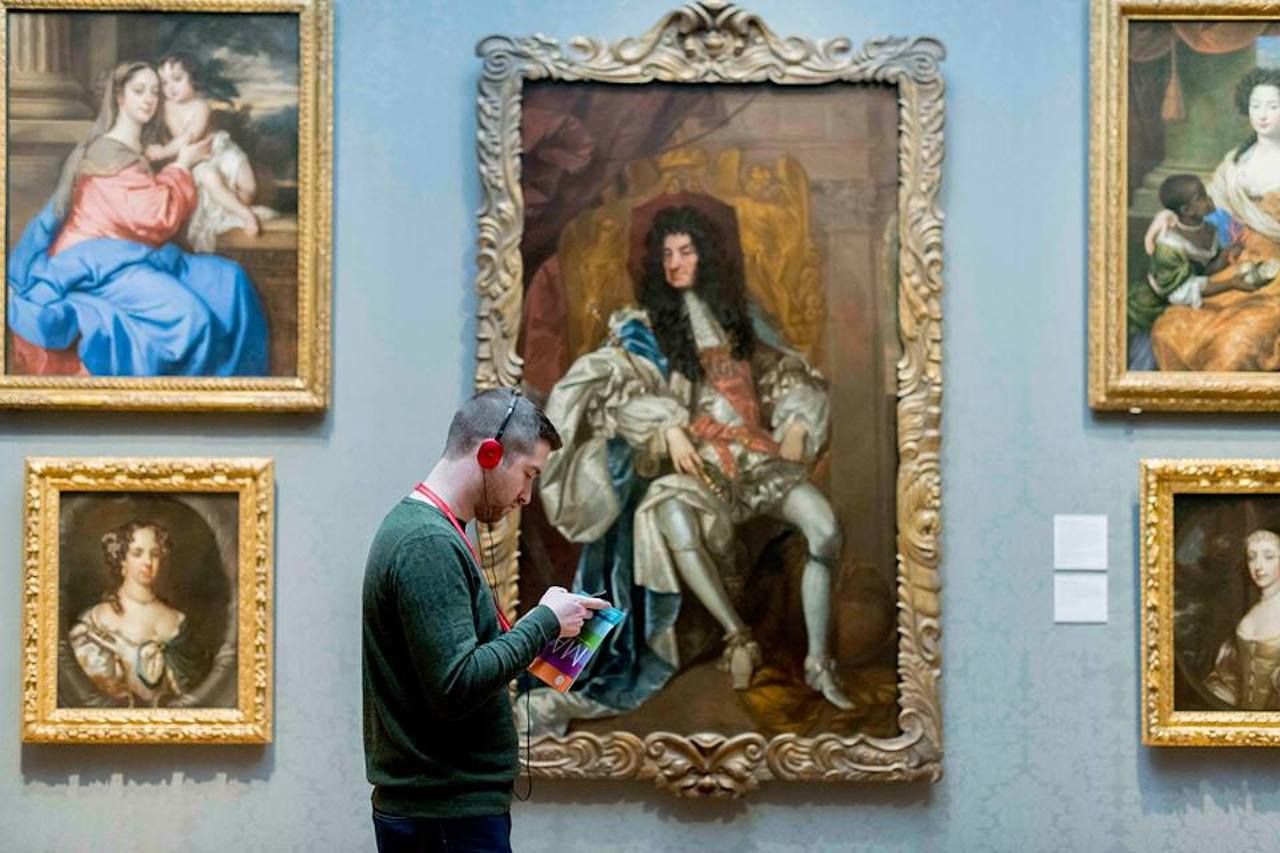 Right next door to the National Gallery is the National Portrait Gallery, so it would be rude to miss it. With 215,000 paintings, this grandiose museum is home to the biggest collection of portraits (think royals, politicians, scientists and even modern-day celebrities) in the world. Start your self-guided tour (audio guides for $3.93 are available at reception) on the first floor, where you’ll be able to trace the fall of the British Empire through vivid portraits and lavish statues of Queen Victoria. Then, head straight to the fourth floor for a peek at “Chando’s portrait” (thought to be William Shakespeare, this is the first portrait that the gallery acquired in 1856). If you feel like splashing out a little, stick around for dinner with a view over Trafalgar Square and the Houses of Parliament at the beautiful Portrait Restaurant.

Bonus tip: If you’re here on a Friday, you’re in luck: Both the National Gallery and National Portrait Gallery are open until 9:00 PM (instead of 6:00 PM), meaning you can take this part of the itinerary a little slower if you wish. 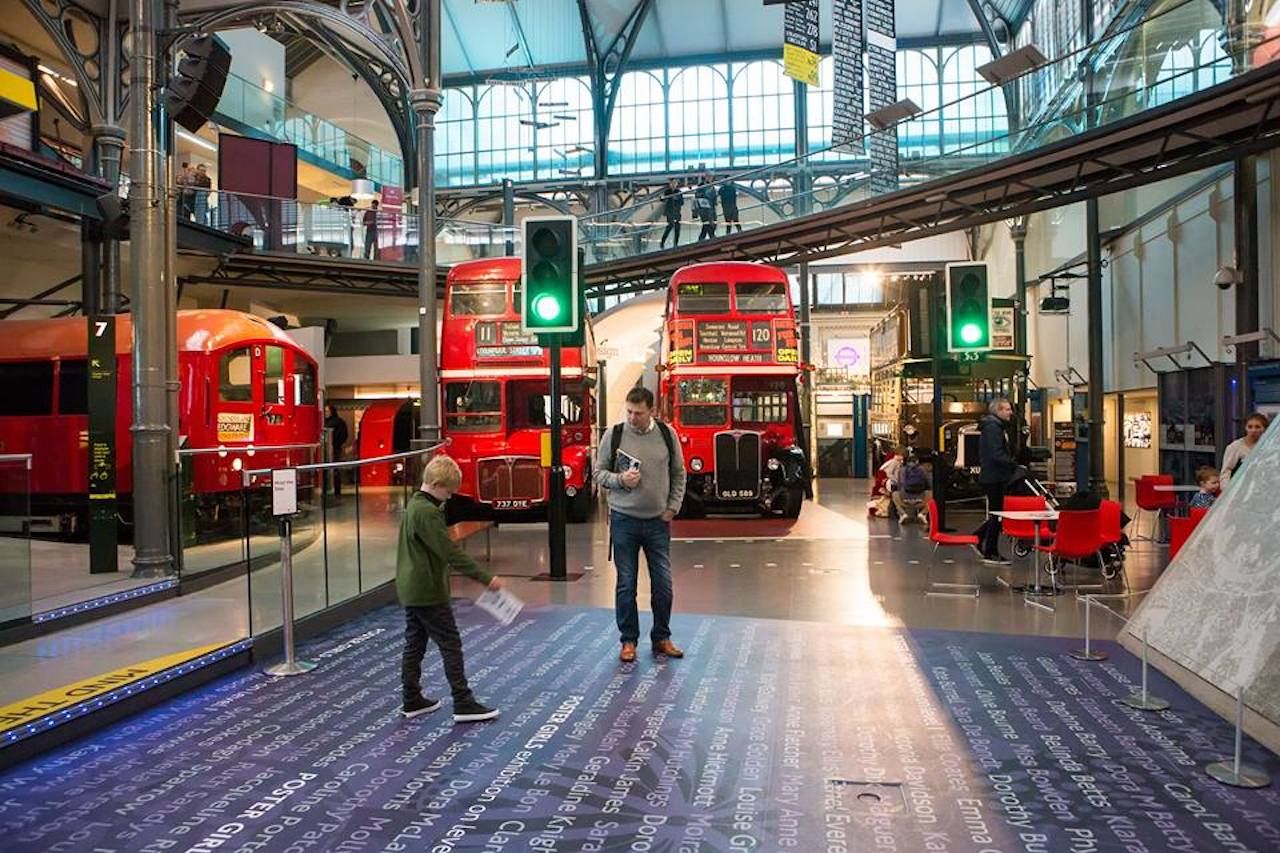 If a double whammy of period paintings sounds like a little much, then opt for the nearby London Transport Museum instead, where horse-drawn buses and vintage tube trains — as well as hundreds of old maps, transport signs, uniforms, posters, and photographs — give an insight into how transport made London into the great city that it is today. Once you’re done clambering through old tube, bus, and train carriages for an hour and a half, finish off the day by hunting down some cool souvenirs in the museum’s gift shop on the ground floor, where you’ll get your hands on vintage underground posters, tube-themed canvas bags, and iconic signs to hang up on your walls at home.

MuseumsHow To Crush the Louvre in One Day
Tagged
Art + Architecture Museums Trip Planning London, England
What did you think of this story?
Meh
Good
Awesome