Not even James Bond was a match for a global pandemic.

Sure, if the virus were a superweapon dreamed up by a nefarious supervillain ensconced deep in a mountain hideout, 007 would have undoubtedly foiled his world-ruining plan and then run off with his girlfriend. But as it was, COVID-19 made James Bond wait. And a year and a half after his latest chapter, No Time to Die, was slated to hit screens, it’s finally opening in theaters.

Coincidentally, the release of Daniel Craig’s last movie as Bond coincides with the UK (the country that gave us 007) opening its borders to vaccinated United States travelers without even so much as a COVID test.

You don’t have to be Le Chiffre to deduce these two events make for a perfect season to Bond-cation in the UK. With everything from legendary filming locales to Bond-themed dinners and the birthplace of the Bond Martini to see, London and its surroundings are a 007 fan’s dream trip. With open borders and airfares lower than usual, here’s how to see the city like the world’s greatest spy.

From Heathrow airport, the first stop on any Bond tour should be Stoke Park about 20 minutes away. It stood in for Royal St. Mark’s, where Bond played the most legendary golf match in movie history against arch nemesis Goldfinger. You’ll recognize the golden facades of the clubhouse, where you can enjoy a hearty lunch and a martini before hitting the fairways — though you could probably get away with just posing on the 18th green, Penfold Heart ball in hand.

Stoke Park’s ballroom made another appearance in 1997’s Tomorrow Never Dies. It was done up to be Bond’s hotel suite, where Bond, played by Pierce Brosnan, and Paris Carver, played by Teri Hatcher, rekindle their old flame. Unlike on the golf course, don’t try recreating this scene.

This is one Bond experience that you may have to wait a little bit for, however. Stoke Park is currently under renovation, and isn’t slated to open until 2023.

Sleep above secret tunnels, and see where the Bond books were born 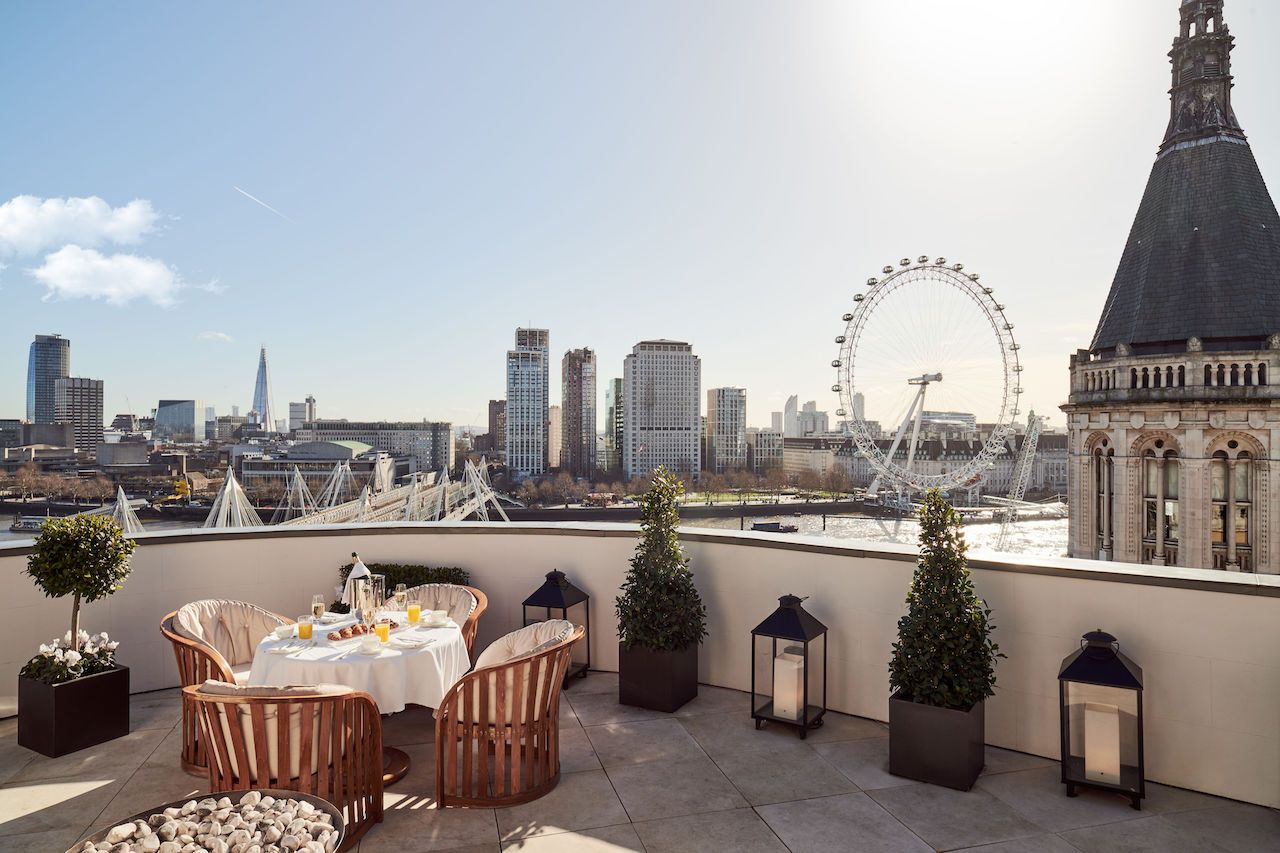 Once in London, post up at the Corinthia Hotel. Though the hotel doesn’t have a great deal of Bond film history (other than hosting the Skyfall) press conference in 2011), its role in real-life British espionage is far more significant. It housed offices for both the Ministry of Defence and the Air Ministry, and military members once used the underground tunnels to move between government offices. Those tunnels are sealed up today, but still give the place a mysterious air. Fans of the old James Bond comic strip might also note Corinthia’s resemblance to the M16 headquarters depicted in the cartoon. Where: Whitehall Pl, London SW1A 2BD, UK

Just down the street you’ll find the Old War Office, a former home of British Naval Intelligence and a former workplace of Ian Fleming. It’s where he was said to have found his inspiration for the Bond books, and the buildings served as the exterior for M16 headquarters in Octopussy, License to Kill, and A View to a Kill.

Though a sightseeing tour might seem like the most un-Bond thing one could do (unless he were posing as a camera-toting tourist to find the location of the Lektor in the Holy Hagia Sophia Grand Mosque) it’s also the best way to get pictures of all the Bond sites you’ve seen in movies. Brit Movie Tours offers a lovely, 2.5-hour trip through London’s drizzly streets, with fun facts and little-known behind-the-scenes anecdotes thrown in.

If your Bond trip has to be all-badass, all-the-time, though, consider taking the Thames RIB Experience. You’ll speed down London’s largest river, Bond music blaring, as you pass current M16 HQ, London Bridge, and the 02 Arena. You can even rent the Exterminator boat used in Spectre, which will have you boating like Bond on a budget for a mere hundred pounds. 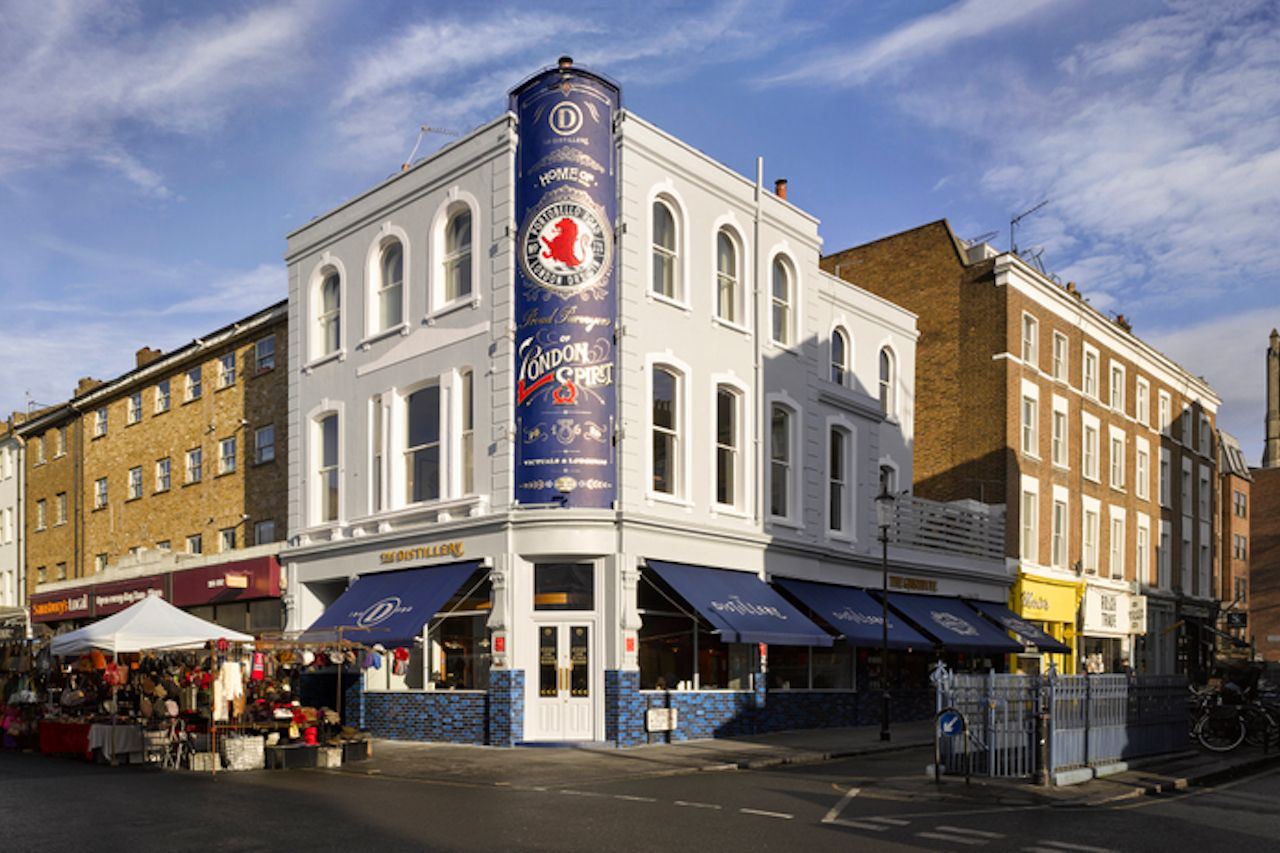 According to hosts of The Distillery’s five-course James Bond dinner, 007 downed a drink about every 11 minutes over the course of his filmography. That’s as much as 12 cocktails a movie, which explains why he had absolutely no qualms jumping into a moving helicopter in Mexico City.

This factoid, among many others regarding Bond and Fleming’s vices, pepper this decadent experience at The Distillery in Notting Hill. The craft gin maker has an upstairs private dining room, where the special feast is filled with Bond-inspired food and drinks, alongside trivia, movie clips, and audio recordings. If the five cocktails served during dinner don’t put you enough in the 007 mindset, the downstairs bar is a fun, local hangout with predictably delicious drinks.

Have a drink at London’s real-life spy hotel

St. Ermin’s Hotel in Westminster wasn’t just where Britain’s famous Special Operations Executive was formed. Its bar was also a notorious meeting place for international spies. Here, the Cambridge Five colluded during the Cold War and Guy Burgess and Kim Philby dished intel to their Russian co-conspirators. The hotel is filled with spy history, including silk tapestries marked in secret code. Urban legend holds that St. Ermin’s also houses secret tunnels going directly into parliament, so placed because MPs would while away their off time at the hotel’s bar.

See the cars that made Bond famous 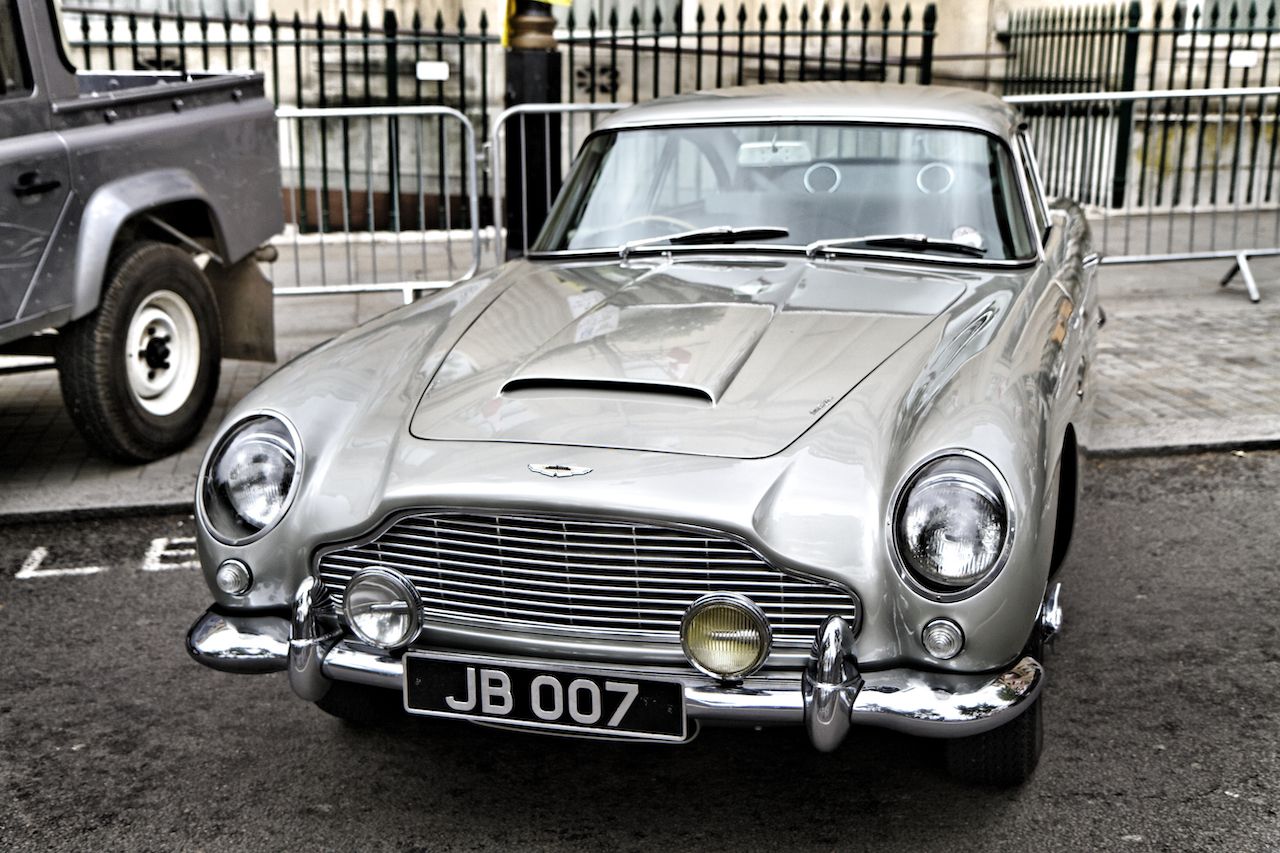 Bond-mobiles have been everything from a BMW Z3 to a Ford Fairlane. But no brand of car is synonymous with Bond quite like Aston Martin, and the global headquarters and factory is a couple hours outside London. While you won’t be able to take a spin in a sports car equipped with a gun turret, you can hop on one of the production facility tours. Inside, you’ll learn how the cars became so associated with 007, and see how Aston Martin’s style has evolved along with its most famous driver.

Visit the hotel with James Bond and Sherlock Holmes’ history

Before Bond, London was home to another of the world’s great literary crime fighters, Sir Sherlock Holmes. And years before Pierce Brosnan stood in its grand entry, Holmes paid the The Langham Hotel several (fictional) visits. The Langham was a favorite hangout for Arthur Conan Doyle, and served as a setting in stories like The Sign of Four and A Scandal in Bohemia. Nearly 100 years later, the fabled West London Victorian structure stood in as St. Petersburg’s Grand Hotel Europe in GoldenEye. 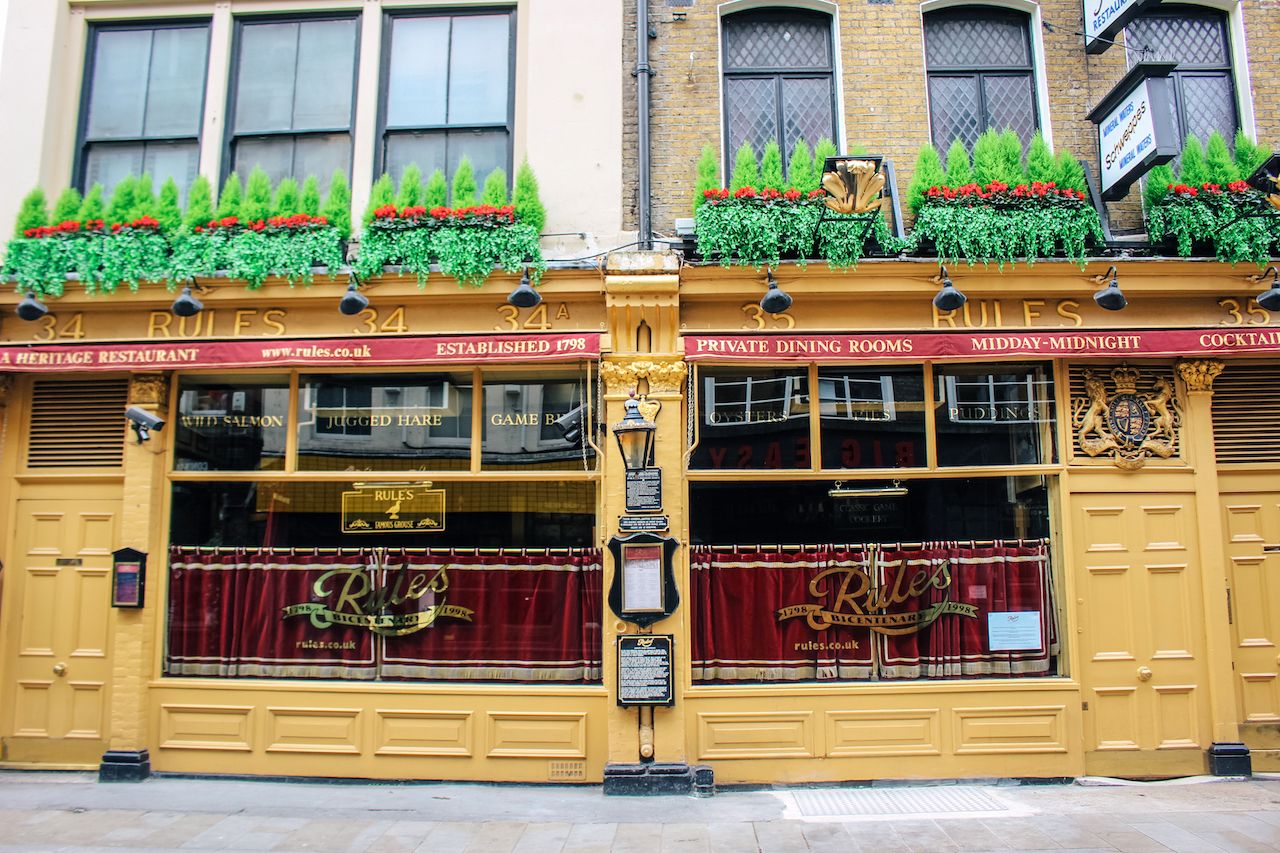 Because evading a man-eating shark is a lot harder on a full stomach than it is after a few martinis, Bond’s eating isn’t nearly as legendary as his drinking. The only restaurant in London you might say is linked to the films is also its oldest: Rules in Covent Garden. The place dates back to 1798 and serves old English fare like game birds and boar. More importantly, it was the restaurant of choice in Spectre when M, Q, and Moneypenny decide whether to help 007 out again.

Perhaps the most poignant scene from Skyfall involved Daniel Craig staring intently at a painting of an old naval ship meeting its end — a not-so-subtle metaphor for the sundown of his career. As he’s meditating on its meaning, Q – played by Ben Wishaw – takes a seat next to Bond and sends him on his way to Shanghai. The film’s iconic painting hangs in Room 34 of the National Gallery on Trafalgar Square, and while “The Fighting Temeraire” is certainly the most notable work of Bond-related art, the gallery is one of the world’s great art museums. It’s worth hanging around after you get your requisite picture on the bench. 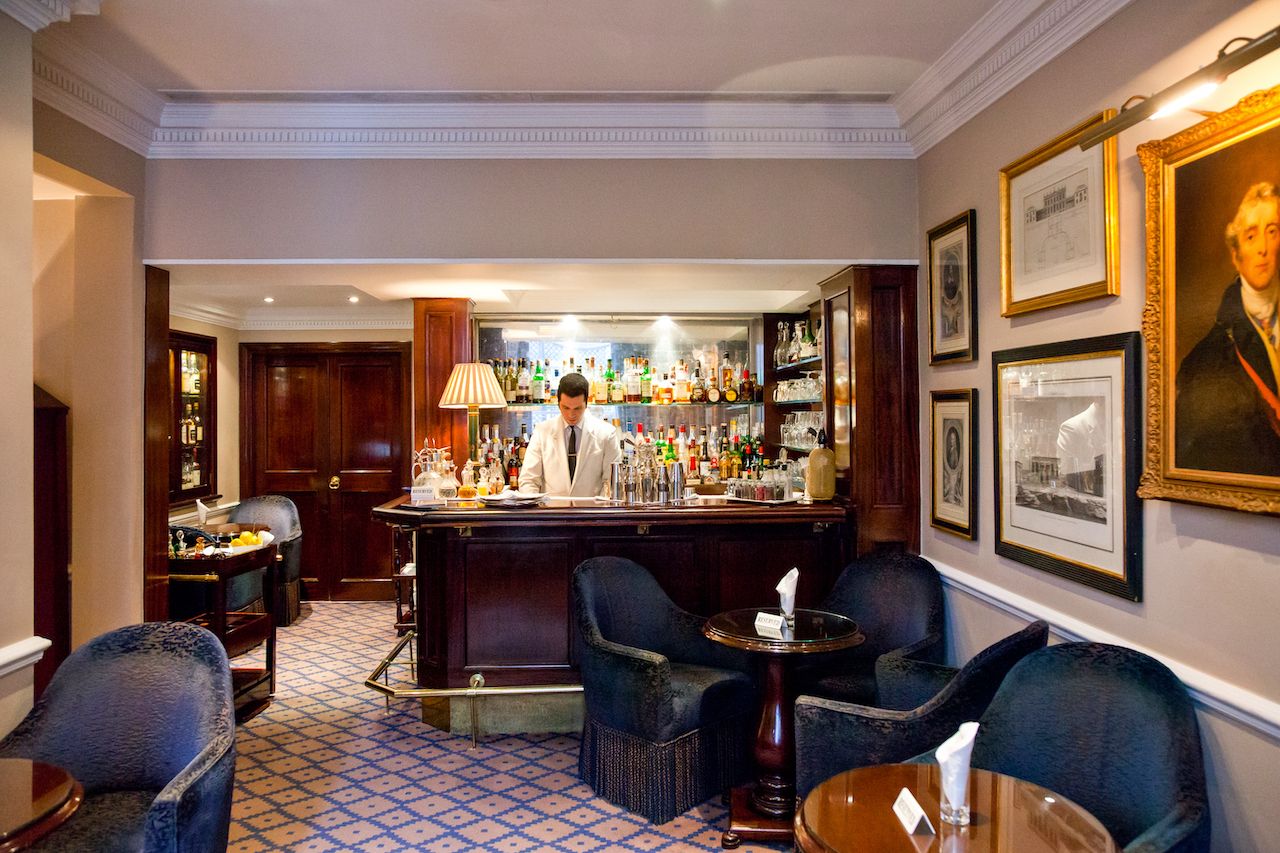 Iam Fleming liked to drink and he liked to write, and he often did both at the bar inside Duke’s Hotel in St. James’s Mayfair. Bond’s affinity for the martini is said to have been inspired by the Duke’s world-famous martinis, most notably the Vesper.

Known as the James Bond martini in other places, the Vesper at Duke’s has two ounces of gin, two ounces of vodka, two tablespoons of Lillet Blanc, bitters, and an orange peel. Do the math, and you understand where Bond got the bravado to bungee jump off the Contra Dam in the Swiss Verzasca Valley. You also understand why Duke’s limits you to two of these things in a sitting, even if you didn’t drive.

Just down the road in St. James you’ll find Turnbull & Asser, the clothier for nearly every Bond from Sean Connery to Daniel Craig. The bespoke shirts and suits aren’t cheap, but after a couple of Vesper martinis you’ll stop converting prices from pounds to dollars. The shop also has an entire collection of recreated wardrobe items from the movies, if you want that exact Casino Royale swag.

Next door is Floris, the unofficial fragrance maker for James Bond. You might ask how one could know what James Bond smells like, other than maybe popcorn and stale soda. But Fleming mentioned the shop in a number of Bond novels, most notably Diamonds are Forever and Dr. No. It’s special No. 89 is the Bond fan favorite as well as the Ian Fleming’s selection. Stopping by for a purchase is a perfect cap to a day of shopping on Jermyn Street and a chance to pick up a souvenir from your Bond vacation that you can talk about for years. Or at least until the bottle runs out.

EntertainmentThe ultimate guide to vacationing in Monte Carlo like James Bond
Tagged
Movies London, United Kingdom
What did you think of this story?
Meh
Good
Awesome

The town of Húsavík, Iceland, is campaigning for an Oscar