Seaside destinations tend to pack tons of tourists onto overcrowded beaches, but not in the Outer Banks of North Carolina. Here, more than 100 miles of open shoreline unfurl, encompassing seaside villages, laid-back towns, and wild refuges that seem farther away from it all than they actually are.

But beyond the remote feel, the geography and history of these barrier islands create some interesting opportunities, too: You’ll watch the sun rise and set over the water from the same place; explore long stretches of coast in their natural state; discover the stories of local pirates, Indigenous tribes, and early American settlers; find plenty of entertainment for the kids; and learn about the origins of human flight.

You could spend weeks enjoying the sun and sand, the wide variety of restaurants and historical attractions, the tiny seaside villages, but you probably don’t have weeks. The solution? Each section of the Outer Banks has a different style — some more low-key, some more kid-friendly — and a different feel. Find your vibe, and that’s your home base. Here’s where to look. 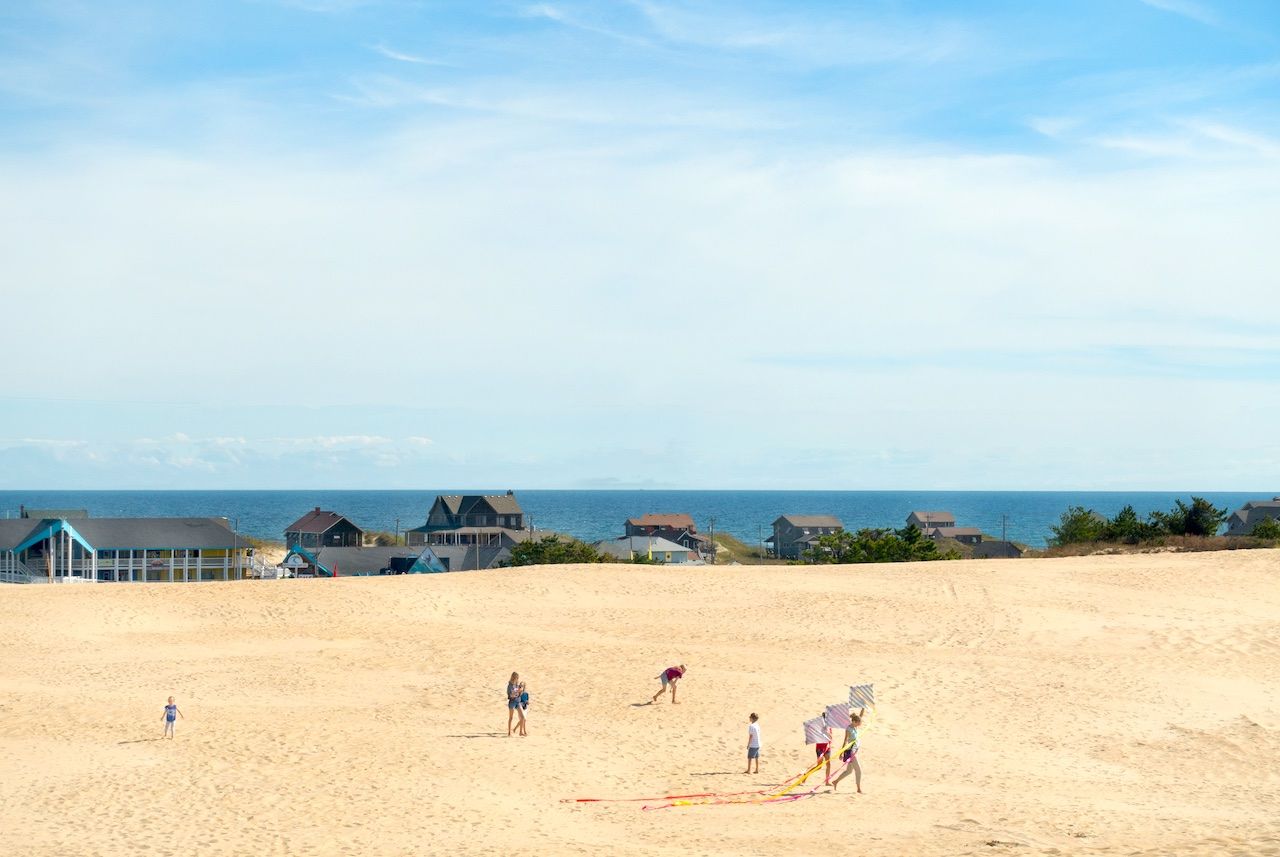 At the top end of the island chain, you’ll find a couple of small towns — namely Duck and Southern Shores — that could easily keep you entertained for your entire vacation. If you want lots to see and do in easy reach and don’t feeling like driving too much, set up camp here. From either town, you can charter a boat for an offshore adventure, take in 18 holes of golf, or check out markets selling everything from fine art to fresh fish.

Some 15 minutes to the south, Kitty Hawk and Kill Devil Hills are best known for their first-in-flight heritage. The Wright Brothers National Memorial features hands-on exhibits, a sculpture of the 1903 plane that you can climb into, and the line that marks the path of the famous first flight.


Then there’s Nags Head and Jockey’s Ridge State Park, home of the tallest living sand dune on the East Coast — as well as some of the region’s best opportunities for hang-gliding, kite-flying, hiking, and paddle sports. When you’re here, don’t miss Jennette’s Pier, a North Carolina Aquarium facility that doubles as an invitation to cast a line into the waves.

You’ll find the Outer Banks’ widest variety of lodging options in this area, with choices ranging from rental houses to condos, hotels and motels, inns, B&Bs, and campgrounds. Food and drink options are top notch, as well — shout-out to the world’s best carbs at Duck Donuts and the award-winning sours at Outer Banks Brewing Station. If you’re a family with curious kids or a crew looking to get out and explore, the Northern Beaches will make a great home base for your OBX vacation.

Tip: If you’re sold on the Northern Beaches but haven’t figured out when to come, consider the weekend of April 16–18 to hit up Taste of the Beach. An annual sampling party of food and drink from tons of local restaurants, it’s a one-stop-shop to discover your new favorite dishes and dining destinations. Event organizers are revamping plans for 2021 to factor in pandemic precautions, but in years past, the event has included wine tastings, organic farm-to-fork meals, cooking classes, brewery tours, tapas crawls, and lots more. 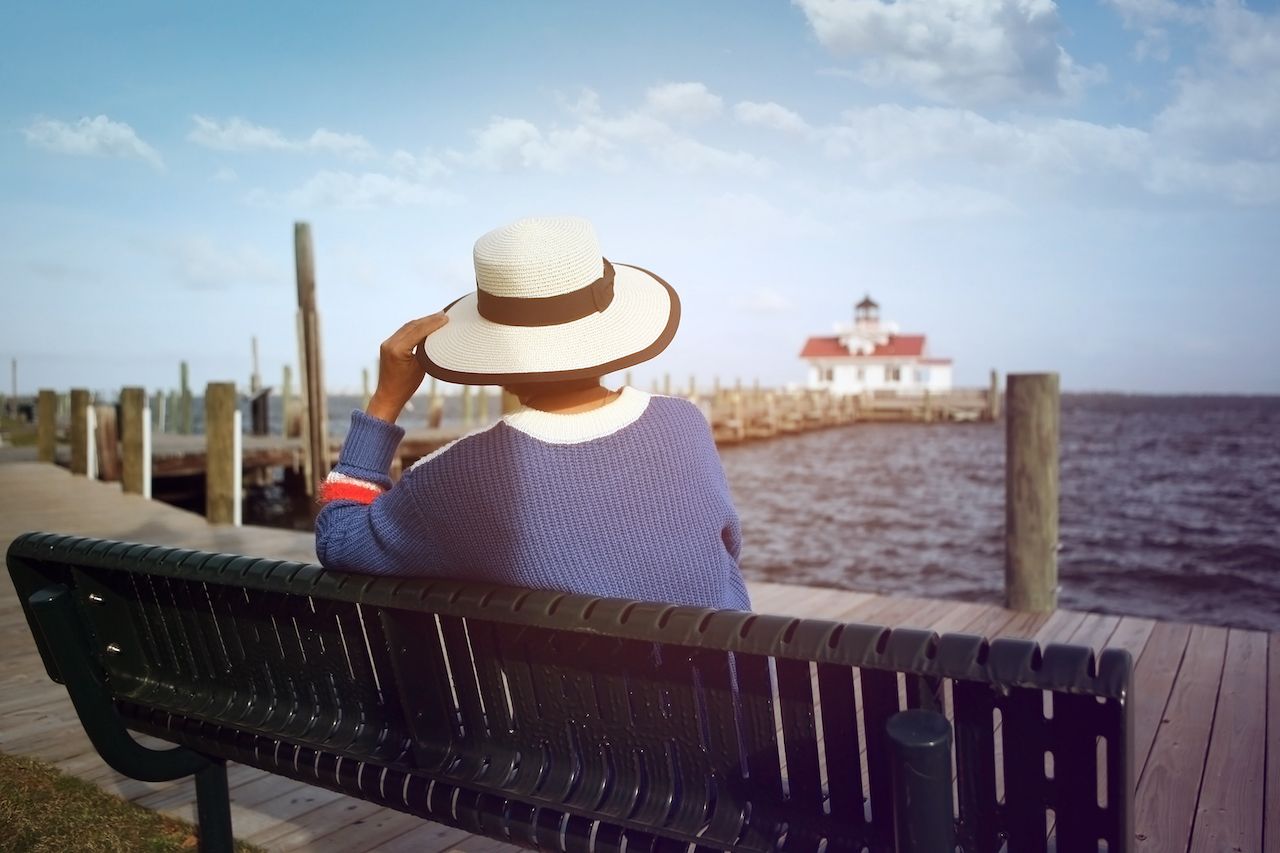 The Roanoke Algonquian people and their predecessors first came here around 9500 to 8000 BCE, creating communities thousands of years before the English arrived on Roanoke Island. Today, you can get a feel for what these early times were like at a number of living history sites, parks, and museums.

Fast-forward to the Renaissance, and English settlers established the second Roanoke Colony on Roanoke Island in 1587 — by 1590, the settlers had vanished. More than 400 years later, we still don’t know what happened. You can catch an annual outdoor drama that tells the story of the Lost Colony at what is now Fort Raleigh National Historic Site, immersing you in the mystery right where the real history happened. Just down the road, Festival Park shows what life was like for both white settlers and Indigenous inhabitants during the late 1500s. You and the fam can climb aboard the Elizabeth II replica ship, plant crops using Algonquian farming techniques, and play the same games colonist kids would have played.

In the early 1860s, a group of formerly enslaved Black Americans founded the Freedmen’s Colony of Roanoke Island, and the Black-majority community they created served as a safe haven during the Civil War. Not only that, but their contributions to the war effort ultimately helped the Union emerge victorious. The Outer Banks History Center in Manteo has exhibits on this colony and other communities throughout the islands, and it’s a great place to spend a rainy day.


Beyond tangible history, Manteo is also home to some of the region’s best seafood restaurants. The powerful Gulf Stream and Labrador Current collide off the coast of North Carolina, stirring up lots of fish, crabs, oysters, and more, all ready to grace your plate right off the boat. Some eateries even offer “hook and cook” service, where you can bring in fish you catch yourself and they’ll prepare it to your liking.

While you’re in Manteo counting crab legs and oysters, don’t miss the world-class North Carolina Aquarium. Where else can you explore a sunken treasure ship, touch a stingray, and have a slumber party in front of a shark tank? Over on the Dare Mainland, meanwhile, leave time to get close to nature beyond the glass: Alligator River National Wildlife Refuge — which has incredible trails over 150,000+ acres — protects habitat for everything from waterfowl to alligators to black bears, so you never know what you might see!

As for accommodations, they tend toward inns and B&Bs in these parts, and most orient themselves more to adults and families with older teens vs. young kids. However, you’ll obviously find plenty to keep your all-ages pod entertained during the day. 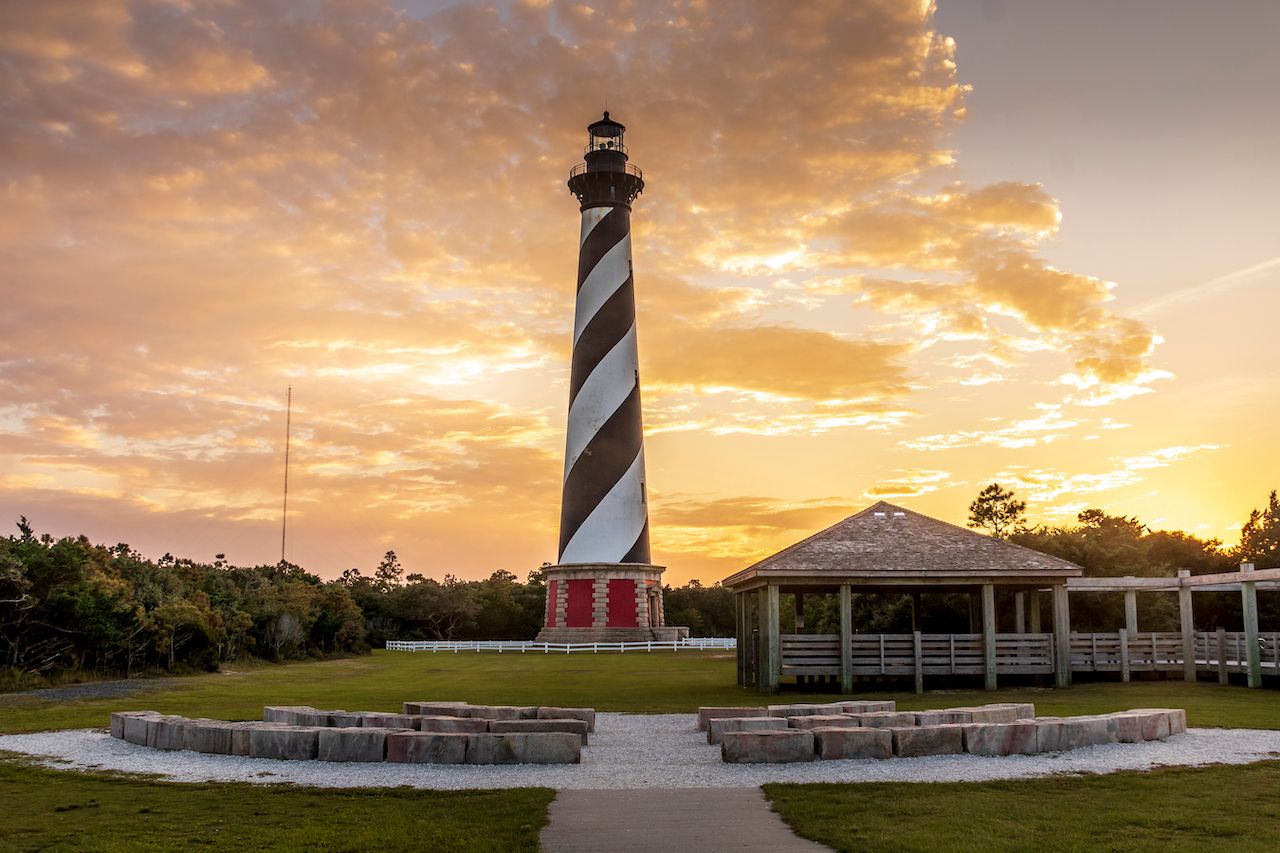 The lower stretch of Dare County’s Outer Banks offers the most solitude on the islands. This is the home of Cape Hatteras Lighthouse, the majority of the wonderfully undeveloped Cape Hatteras National Seashore, and lots of outlets for kiteboarding, windsurfing, horseback riding, fishing, and other recreation amidst the waves. And if you’re just after a quiet refuge away from it all where you can sit and reflect while watching the sea, you’ll find your happy place on Hatteras Island.

Normally, a climb up Cape Hatteras Lighthouse would give you the Outer Banks’ best bird’s-eye view of the sound, sea, and island chain. Visitors can usually get tickets from late April through Columbus Day, but COVID-19 precautions are currently in place and the lighthouse’s stairs are temporarily closed. Still, you can stop by for photo ops and a visit to the adjacent Hatteras Island Visitor Center and Museum of the Sea for tips on local recreation and insight on the history of the lighthouse — including its half-mile move inland in 1999.


If you’ve seen or read Nights in Rodanthe, you have an idea of the quiet inns, B&Bs, and vacation rental homes that dot Hatteras Island. You can stay at the actual Inn at Rodanthe as seen in the film, which has been moved inland — just like the lighthouse — to protect it from the ever-changing line between shore and sea. Other lodging options here include small motels, condos and townhouses that don’t overpower the landscape, cute cottages, and fully equipped campgrounds and RV parks for those who bring their accommodations with them to the beach.

You can drive the entire length of the island — and all along the national seashore — via the Outer Banks National Scenic Byway, a 138-mile route that winds down to Whalebone Junction, just south of Nags Head. It’s one of the most beautiful drives in the state, connecting ocean views to natural spots like Pea Island National Wildlife Refuge, where bird species outnumber days in the year (and observation platforms are right off the parking areas). If wildlife were factored into the solitude equation, Hatteras would be one of the buzziest spots around.

This post is proudly produced in partnership with the Outer Banks Visitors Bureau.
Tagged
Beaches + Islands North Carolina, United States
What did you think of this story?
Meh
Good
Awesome

In French Polynesia, ditch the jetski and get to know the island’s Indigenous culture

The best free and low-cost things to do in Kauai