Mending has seemingly fallen out of fashion. Few people bother to darn their socks when holes appear in them, and next to no one patches their torn jeans, changes their broken zippers, or replaces the waist elastic on their sweats. Instead, we chuck the damaged clothes in a donation bag and buy new ones. Blame it on the loss of sewing skills that used to be passed from generation to generation, the lack of time in our busy schedules, or our obsessive consumerism — whatever the reason, the results are a lack of care and appreciation for our possessions and immense environmental damage.

But sashiko, a traditional Japanese mending technique, can be our saving grace. Although not a new invention, this form of folk art rooted in humble beginnings is becoming a trend in the western world. There’s no need to know how to sew perfectly or even know how to use a sewing machine — a simple thread and needle and a will to let go of perfectionist ideals will have you look at your busted clothing items in an entirely different light.

Born out of necessity 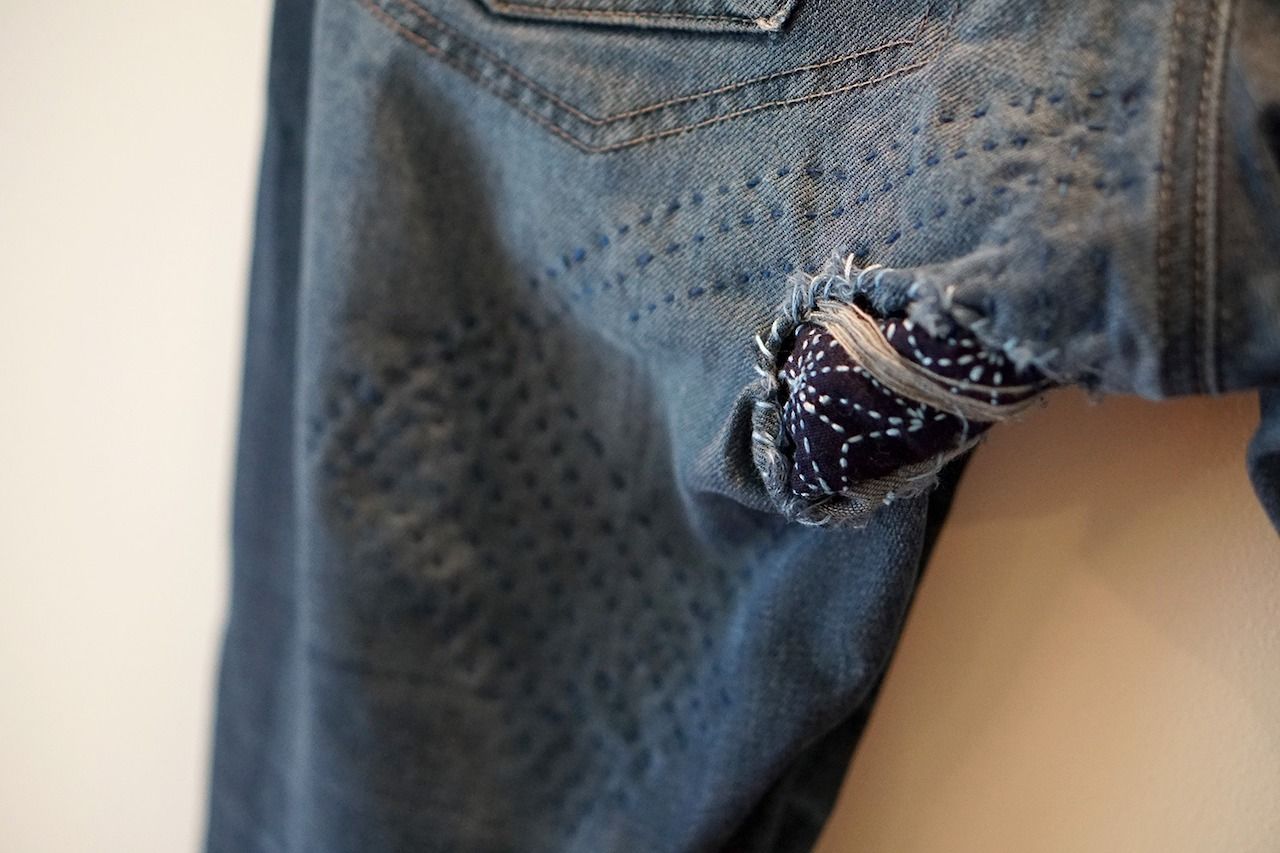 Sashiko’s origins go back to the Edo period (1603-1867) in Japan. The technique was first developed in poor communities, particularly in rural areas, out of necessity. Without money or assets to buy new textiles, the people of Japan would repair their clothing and other household items with what was readily available: a needle, thread, and any extra fabric that was lying around.

The priority for those Japanese people was speed, or else they’d suffer greatly when colder weather came around. While they could not get around the inherently slow nature of hand-stitching, they could speed up the process by switching up the needlework. Instead of using equal-sized stitches and measuring out the spaces between them, they used a running stitch called unshin. This resulted in needlework where no two stitches were purposefully alike.

It was only many years later that people began to get creative with their sashiko, producing unique geometric patterns. Sashiko mending was always visible, and as some could now afford the luxury of time and attention that unique patterning required, it became a form of expression in which artisans could leave their personal mark on a piece of fabric.

There’s no right or wrong 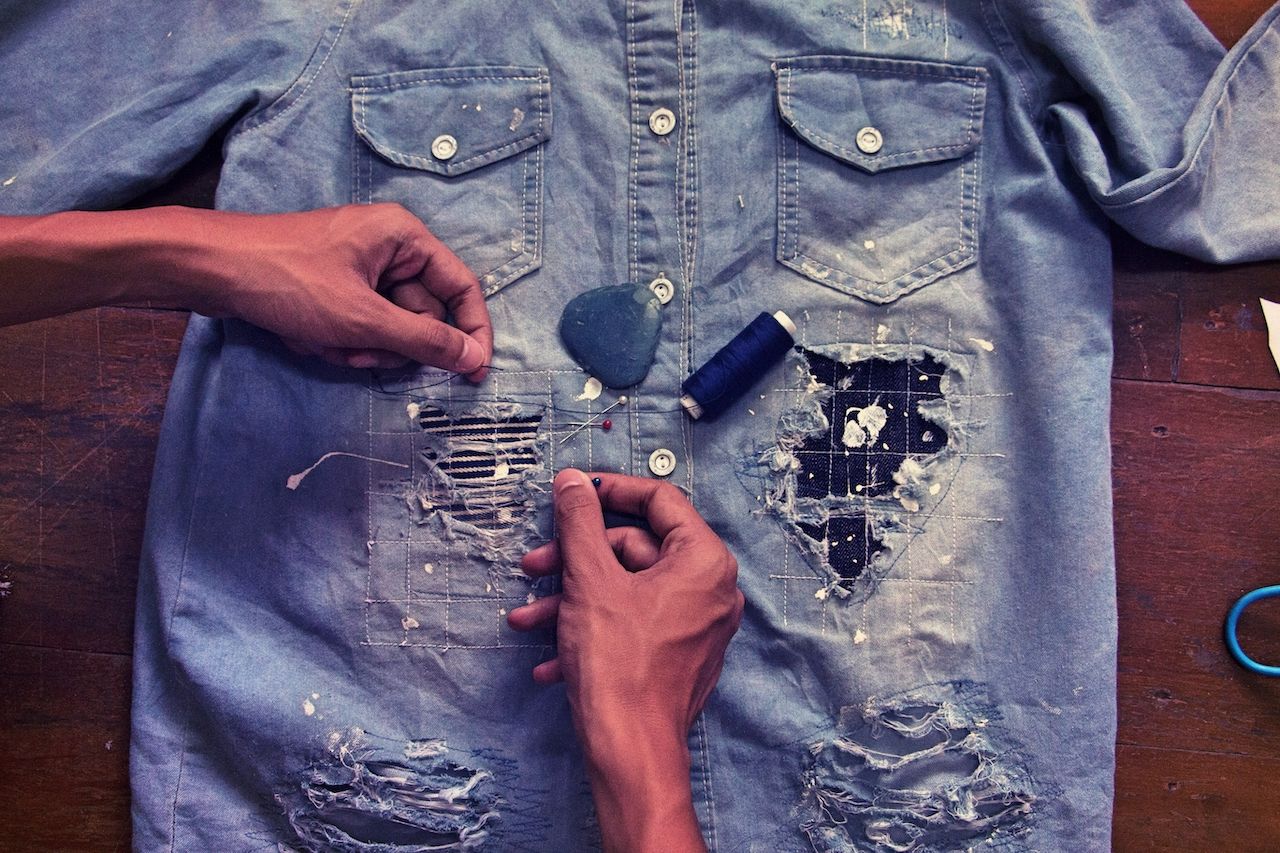 What the world has come to know as traditional sashiko is the combination of indigo fabric and white thread, but the reason behind this combination was a lack of options; the two were readily available, and artisans were not skilled in the art of dyeing at the time. Nowadays, fabrics and threads designed for sashiko come in a variety of colors, leaving only the stitching itself for a person to do. And they can do whatever they want in terms of stitching patterns because there’s no right or wrong.

“As there is no such thing as the ‘correct’ pizza, I do not believe there is such a thing as the ‘right sashiko’ as a result,” Atsushi Futatsuya tells Matador Network. “Sashiko is just a form of stitching after all. Anyone can do it.”

Futatsuya is a sashiko artisan that has been surrounded by sashiko for as long as he can remember. He was born in Japan’s Gifu Prefecture, into a family that had a sashiko business as its main source of income. After taking a break from it and a move to the United States, he returned to the craft after a fortuitous call with his mother in June 2014, in which she stated that she wanted to practice sashiko again. In 2015, Futatsuya opened Upcycle Stitches, a company with a mission to share sashiko with the world, from workshops to a store selling both his and his mother’s work and the tools to do it yourself.

The one thing that Futatsuya notes is most important to sashiko is remembering its humble origin and respecting the Japanese culture it comes from — that it did not start as a fashion statement or was done for enjoyment. “Anyone can call their stitching sashiko if they want. However, if one starts not caring [about] the origin of its culture, then the culture may be repainted. There are people behind the culture, and it is a sad form of cultural appropriation,” he says.

Some brands in particular attach the name sashiko to something that isn’t sashiko, even in the loosest sense of the word, for the purpose of selling the item to consumers who want to purchase something seemingly authentic. 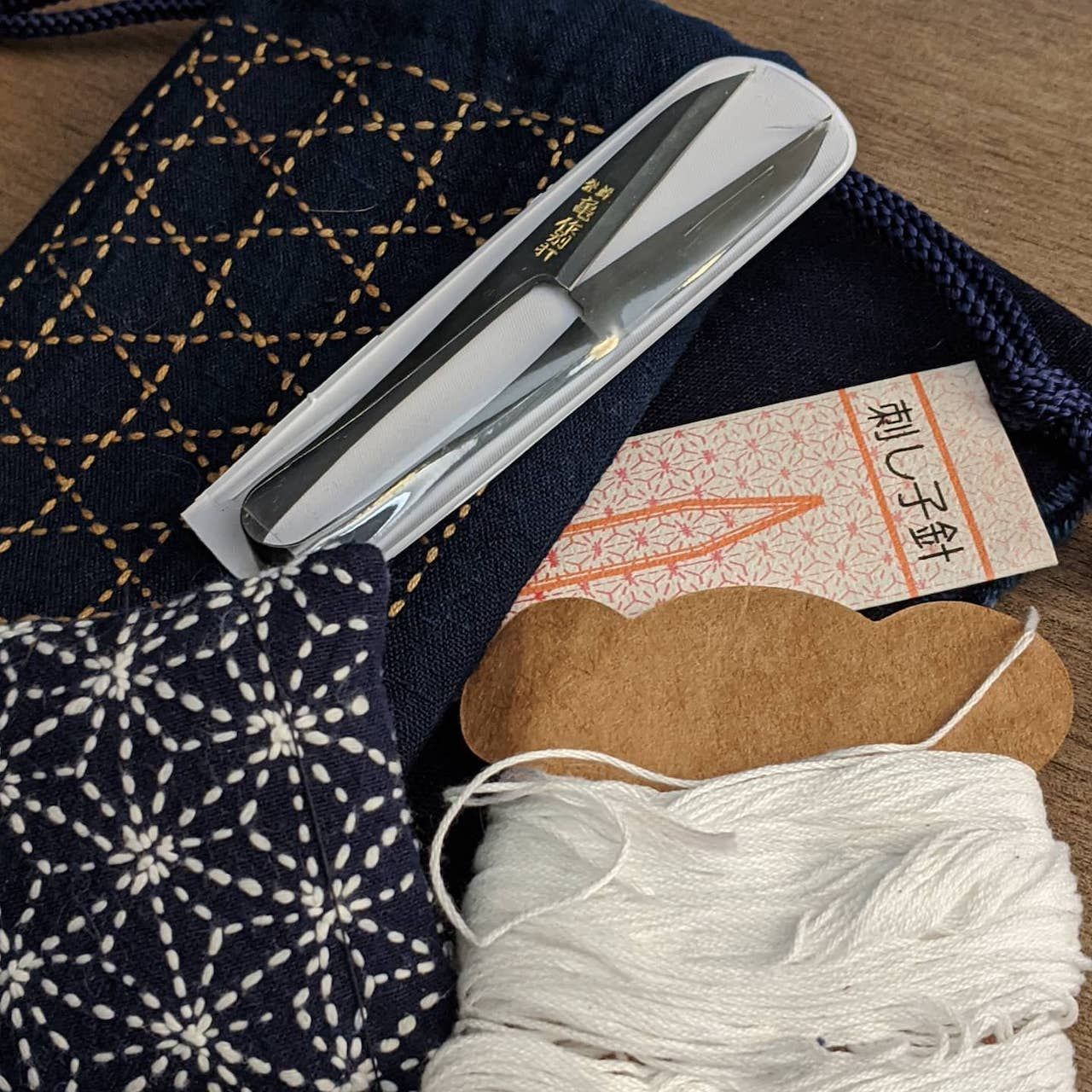 An essential part of respecting the tradition of this craft is using the proper tools. In the past, Japanese people used whatever they had on hand to mend clothing and other items, and today’s sashiko tools must be a reflection of that. To use anything other than sashiko thread, sashiko needles, and a sashiko thimble — all of them a rather small investment — is to ignore the culture from which it came, Futatsuya says.

Lessons to be learned 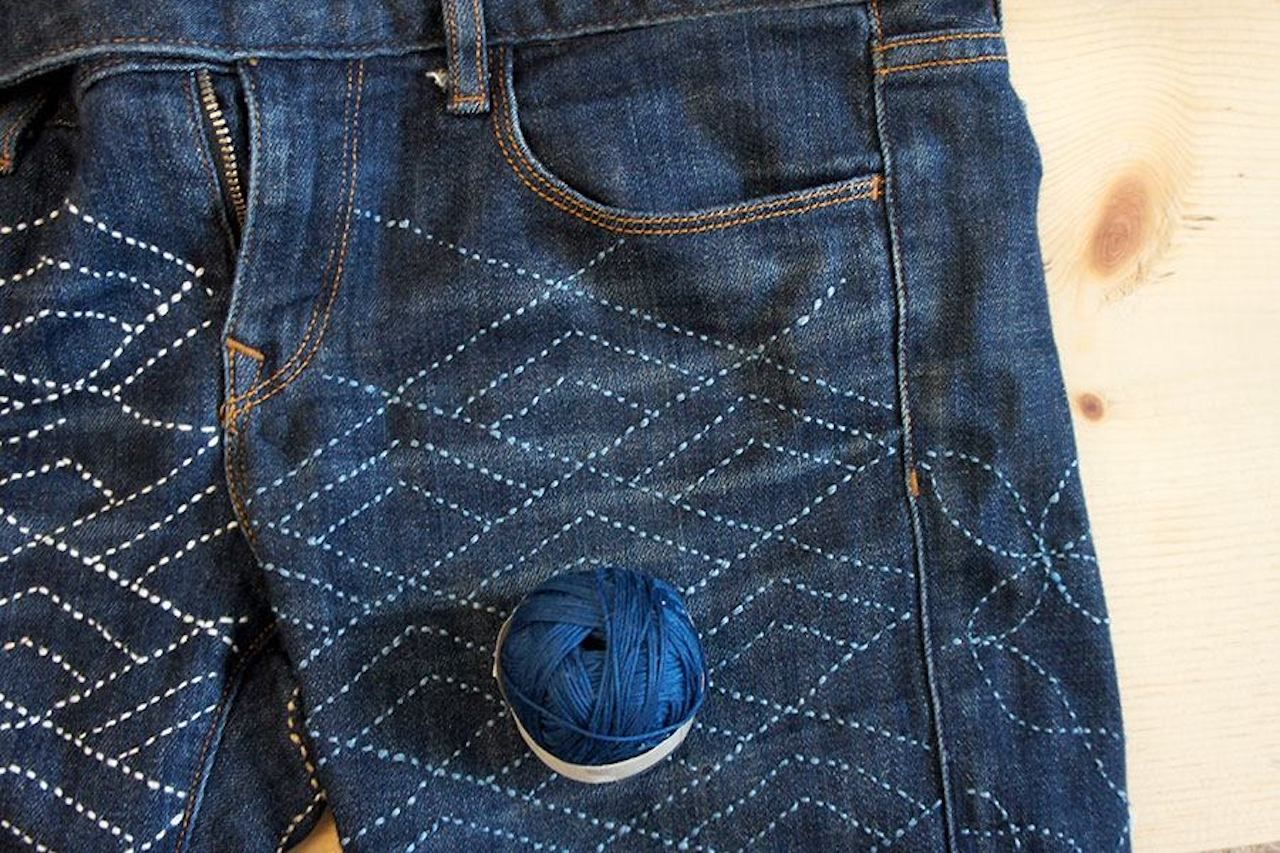 Sashiko is the appreciation of what we have by mending, repairing, strengthening, and decorating. It’s a process that takes time. But it’s in this time that people can learn valuable lessons that can be applied to all parts of life.

In a society that prioritizes productivity and the end result above all else, mistakes and flaws are seen as signs of failure. In sashiko, however, there’s no such thing as perfection — mistakes are part of the process and the end result. Flaws can be beautiful and shouldn’t be covered up.

“I always tell my students to focus on the process (rhythm) rather than the results. In today’s society, the result (perfect, quick, and effective) is very important. Many people apply the concept of ‘good result’ or ‘correct result’ in sashiko as well. One of the most frequent questions I get is ‘Am I doing sashiko right?’” Futatsuya elaborates via email. But, as he’s stated before, “right” and “wrong” are relative. He goes on to add, “Therefore, I always ask people to care for the process (of learning and practicing) rather than how it looks (results).” 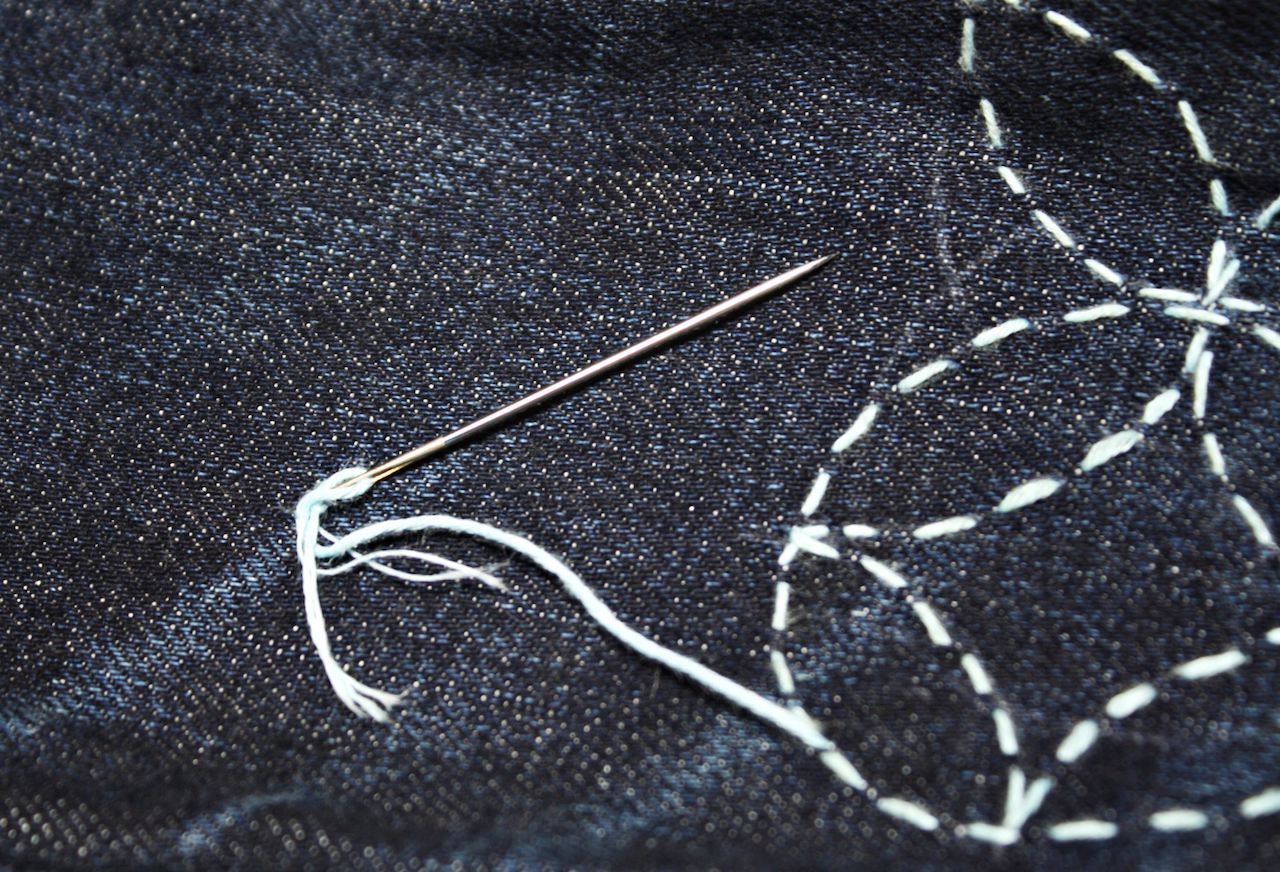 Sewing in general forces one to be in the moment, but sashiko mending is a slow process that requires both your hands and some attention — there’s no Instagram scrolling while hand-stitching. It’s all about mindfulness and appreciation for the work you’re doing.

But sashiko can be a social activity, bringing people together in groups and creating connections.

“[In the time it takes to practice sashiko] no one can continue being judgemental to oneself for that long. By people practicing sashiko within rhythmical stitching, they can stitch without paying attention to the stitching,” Futatsuya explains. “They can talk while stitching, and I believe it was the original scenery in Japan in a community where people had to practice sashiko — they got together, stitched, and bitched (about their life).”

To Futatsuya, the significance sashiko holds is similar. “Sashiko to me is a way to remember what artisans had chit-chatted over doing sashiko in my childhood. Sashiko is a way to express their message while I personally enjoy the time of stitching.”

The fight against fast fashion 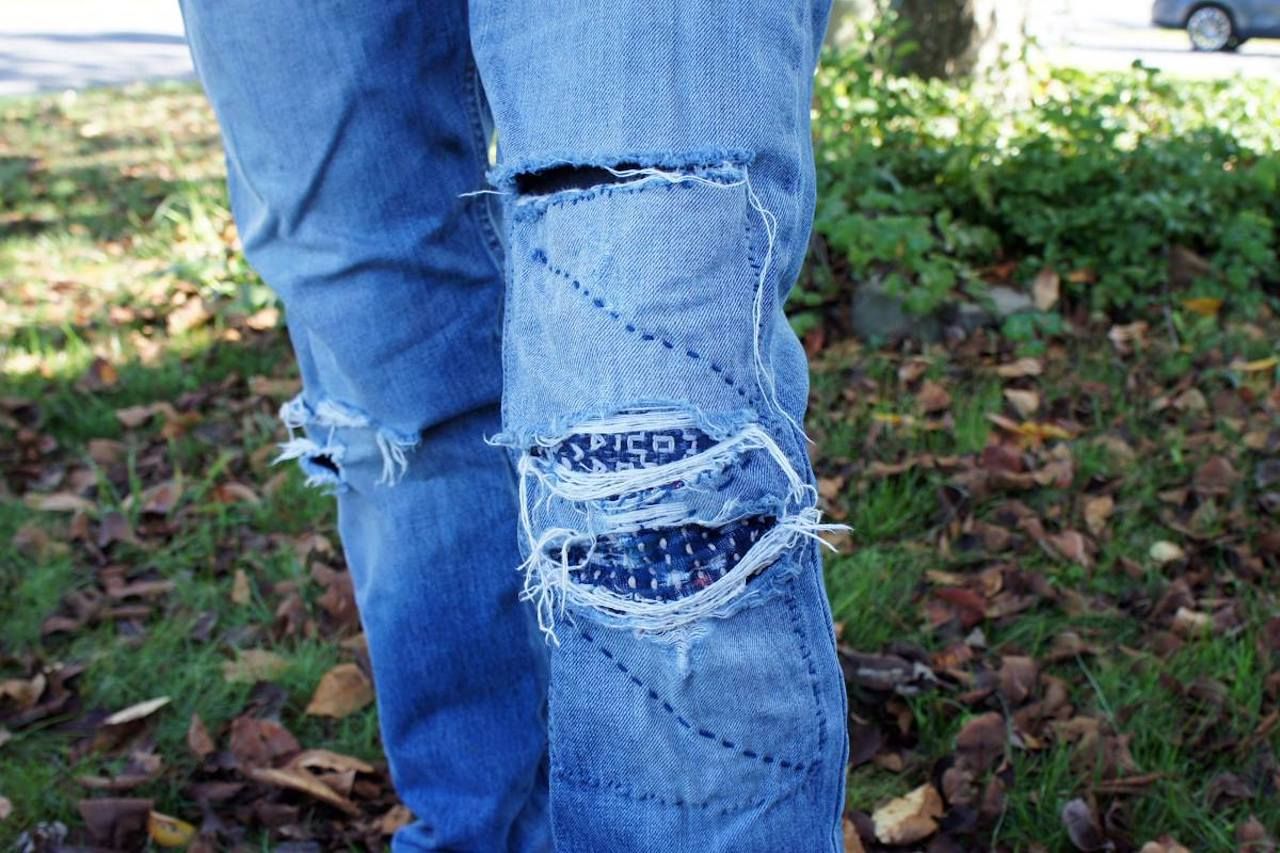 As the world increasingly focuses on sustainability and ways to protect the environment, many people are taking a hard look at what factors are detrimental to conservation. Fast fashion, which is clothing that’s mass produced quickly and cheaply, is one of those negative factors. According to the United Nations Environment Programme, the fashion industry produces 20 percent of global wastewater and 10 percent of global carbon emissions — which is more than the airline and maritime shipping industries combined. To put things into perspective, it takes 2,000 gallons of water to make a single pair of jeans and 700 gallons for a cotton shirt.

About 85 percent of clothes and textile waste either goes into landfills or is incinerated. And because over 60 percent of fabric is made with synthetic fibers, it does not decay or break down in any way on its own.

Even the ocean cannot escape unscathed, as the washing of clothes releases approximately 500,000 tons of microfibers into its waters each year. According to a 2017 report published by the International Union for Conservation of Nature, it’s estimated that 35 percent of all microplastics in the ocean comes from the washing of textiles.

To combat this, many are looking to alternatives for their clothing. Stretching out the life of a clothing item to its limits seems like one of the obvious solutions, but what happens when those inevitable signs of wear — rips and tears — crop up? Not everyone has a sewing machine or the knowledge to use it correctly, or the even money to have it professionally repaired. 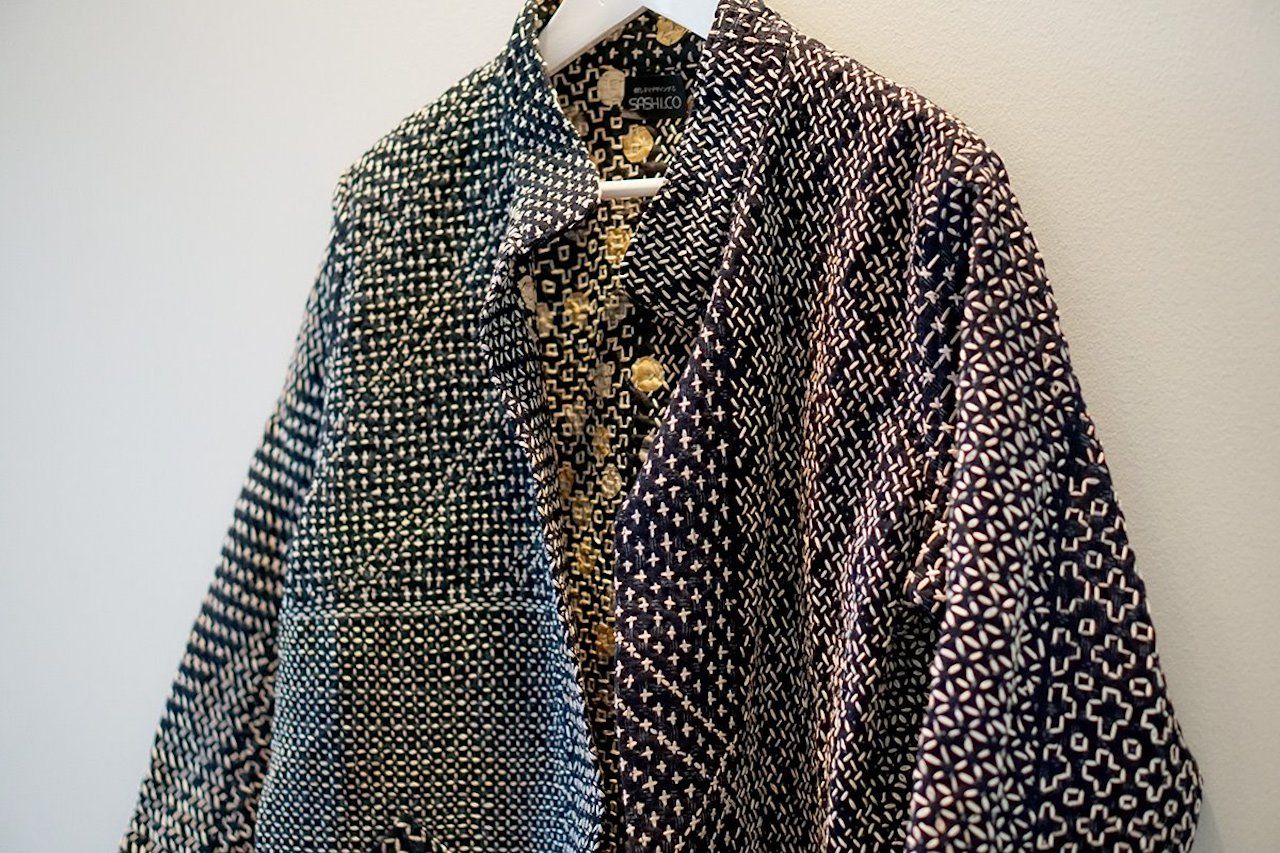 Enter sashiko, where just about anyone can pick up the needle — no prior sewing knowledge is truly necessary. Picking up the right needle, threading, and fabric is as easy as a quick Google search, and there are a number of tutorials on YouTube to follow along with; along with Upcycle Stitches’ own YouTube channel is its Instagram page, which provides visual, as well as text, information on sashiko.

Its popularity has soared and is probably at its peak, Futatsuya says. Forty years ago, the number of non-Japanese people who knew about sashiko was low. Fast forward to around 15 years ago, and more people began to take up sashiko, particularly those in Australia and Europe. And now, due to the sustainability geared mindset and slow fashion trend as a means to turn the tide against fast fashion, sashiko is more popular than ever before.

While sashiko was initially created to fulfill a need within poor communities, not for environmental conservation, it can be used for such now. While keeping in mind its origins, sashiko’s core value, and lesson, of appreciation and caring can be applied to clothing; instead of treating them as disposable items, we can come to value them differently, creating a connection to them that is more meaningful — for both our own sake and the environment.

FashionGreenland’s National Costume Is a Work of Art
Tagged
Fashion Sustainability Japan
What did you think of this story?
Meh
Good
Awesome