Any mention of Greenland may bring to mind a frozen terrain devoid of trees and a dreary landscape, but the reality is entirely different than what our imagination has crafted. Granted the flora is not as brightly hued as what you’d find further south, and the weather is rarely clement. But the nation is far from being uncolored or dull, and the national costume is the best proof there is to sustain this argument.

Greenland’s national dress is incredibly vibrant and intricate. Its unique aesthetic and cultural significance come from a combination of available Arctic raw materials, blended with the effects of colonialism and globalization. Today, Greenlanders work hard to maintain this element of their heritage. Although there is heated controversy regarding the attire’s future, one thing is for sure: The iconic Greenlandic national dress is a work of art that deserves the world’s attention.

When Icelandic Vikings first began to colonize Greenland around the 10th century, the Inuit people who lived there wore attire made of animal skins. The Inuit used the skins from polar bears and seals to make clothes and boots, or kamiks. As with everywhere with extremely cold climates, skins served as functional protection on the freezing Greenlandic tundra and in kayaks on the water.

After the arrival of the Vikings, group after group of people came to Greenland to fish and hunt, and sometimes they stuck around. Each arriving culture inspired changes to indigenous Greenlandic attire.

Moravian Brethren missionaries living in exile from what is now Germany were the first to encourage Greenlanders to develop a national attire in approximately 1733. Greenlanders’ national clothing is a profound source of ethnic pride as the ensemble indicates their cultural independence and identity and honors the powerful role of the women who sew the clothes. All Greenlanders and anyone who feels an affiliation with Greenland are allowed and encouraged to wear the special national attire. Young children begin wearing the national dress upon their first birthday — sometimes earlier.

Contemporary Greenlanders wear their national clothing for religious, secular, and civic special occasions. Festivals are transformed into living showcases of this meaningful attire. The clothing is worn during rites of passage ceremonies like confirmation and children’s birthdays, as well as first days of school, which are very important to Greenlandic families. The attire is also worn on Christmas, Easter, and Greenland’s National Day (June 21). Greenlanders wear the clothing to greet visitors at ports of call, as well. 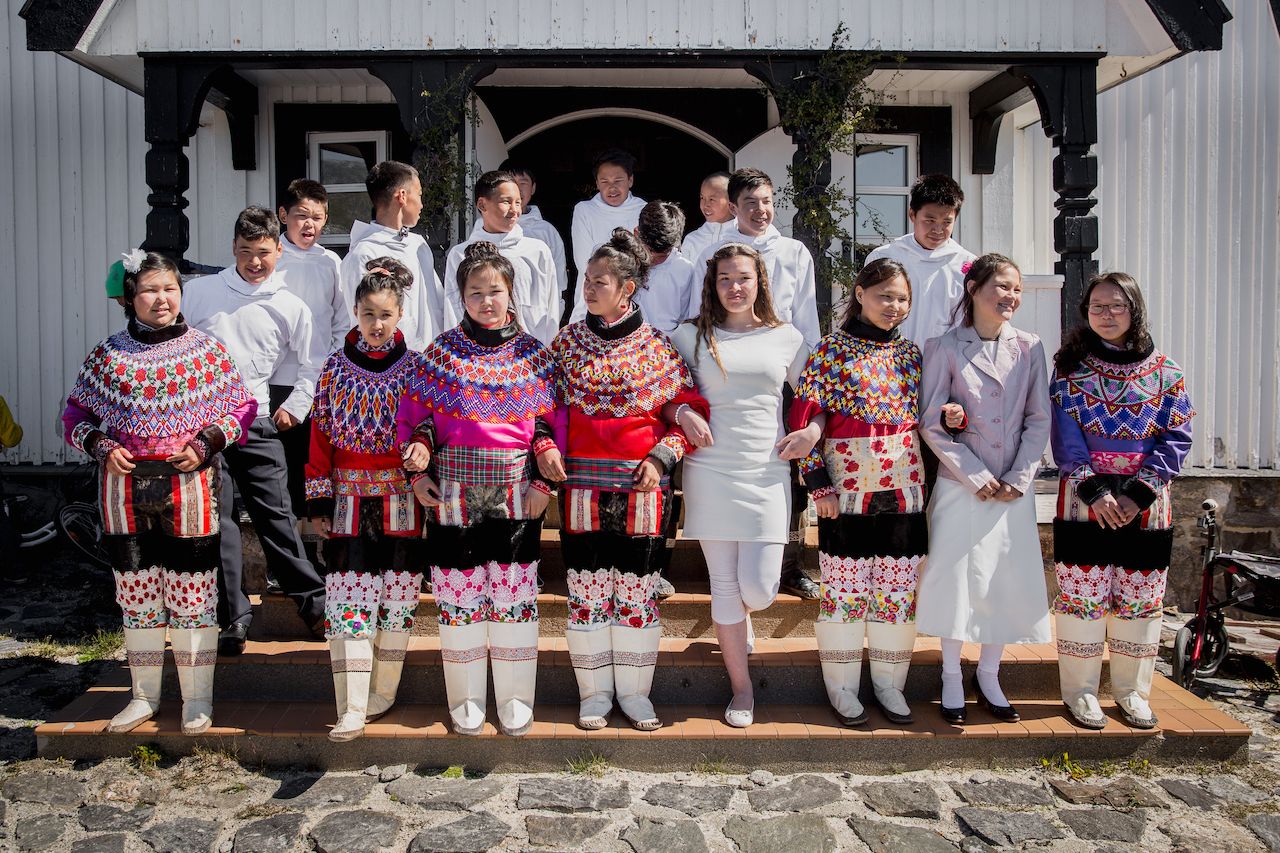 In the indigenous language of Greenlandic, a man wearing national clothing is called qaqortumaartoq, which translates to “being dressed in white.” Arnatoortoq is the term for a woman wearing festive clothing.

Greenlandic men’s national clothing tends to be more functional than decorative. They wear a white anorak (tunic) sewn of silk, satin, canvas, or, rarely, wool. Sometimes the anorak has a hood or embellished breast pockets, and it usually has side pockets that tend not to be decorated. The men wear black, green, or blue trousers and kamiks, which sometimes feature a single cuff of embroidery. The outfit might feature colorful avittat, which is sealskin that’s been dyed, cut into strips, and interspersed throughout the rest of the garments. That, however, is usually more prominent in women’s ornate dress. Men’s anoraks have hoods. 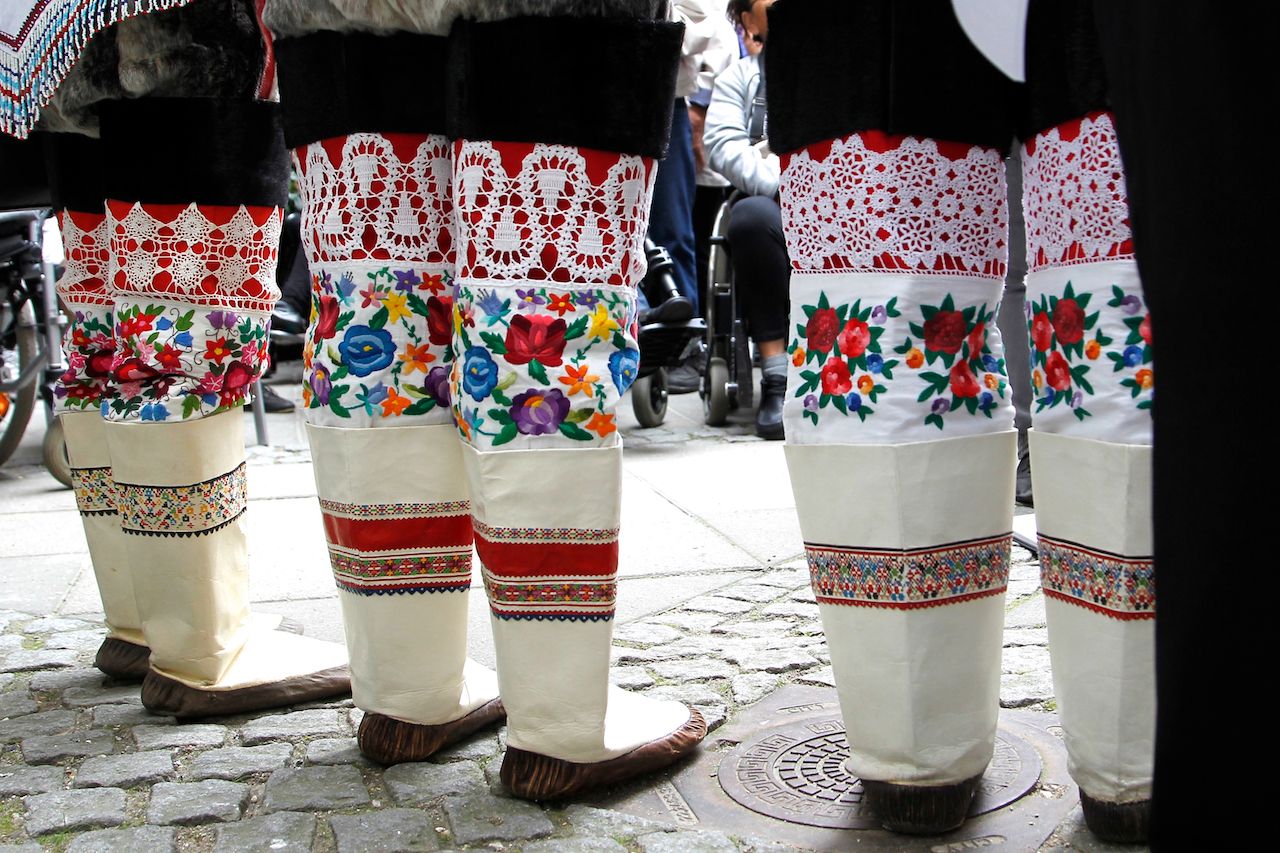 The women’s anorak goes over a blouse called a timmiaq. Greenlandic festive clothing appears to be the only national attire that gives preference to ladies’ trousers versus skirts. Their pants only reach the upper thigh where the kamik starts. Women’s kamiks are long, lined, wide sealskin boots accented with avittat and silk floral embroidery on the upper third or so.

The visually stunning yoke is a more recent addition to the outfit. Yokes are crafted with glass or pearl seed beads sourced from around the world. Over time, the yokes have grown longer, and fabric was added to embellish the anoraks. For both men and women, certain elements of the clothing indicate wealth and social status. For example, historically, more beads have meant the wearer has more prestige.

Greenlanders have constantly been exposed to new aesthetics and the global trade of objects and ideas that accompany cultural contact. While East Greenlanders’ clothing has always been simpler than that of West Greenlanders, constant interactions with newcomers changed both groups’ clothing in many ways. 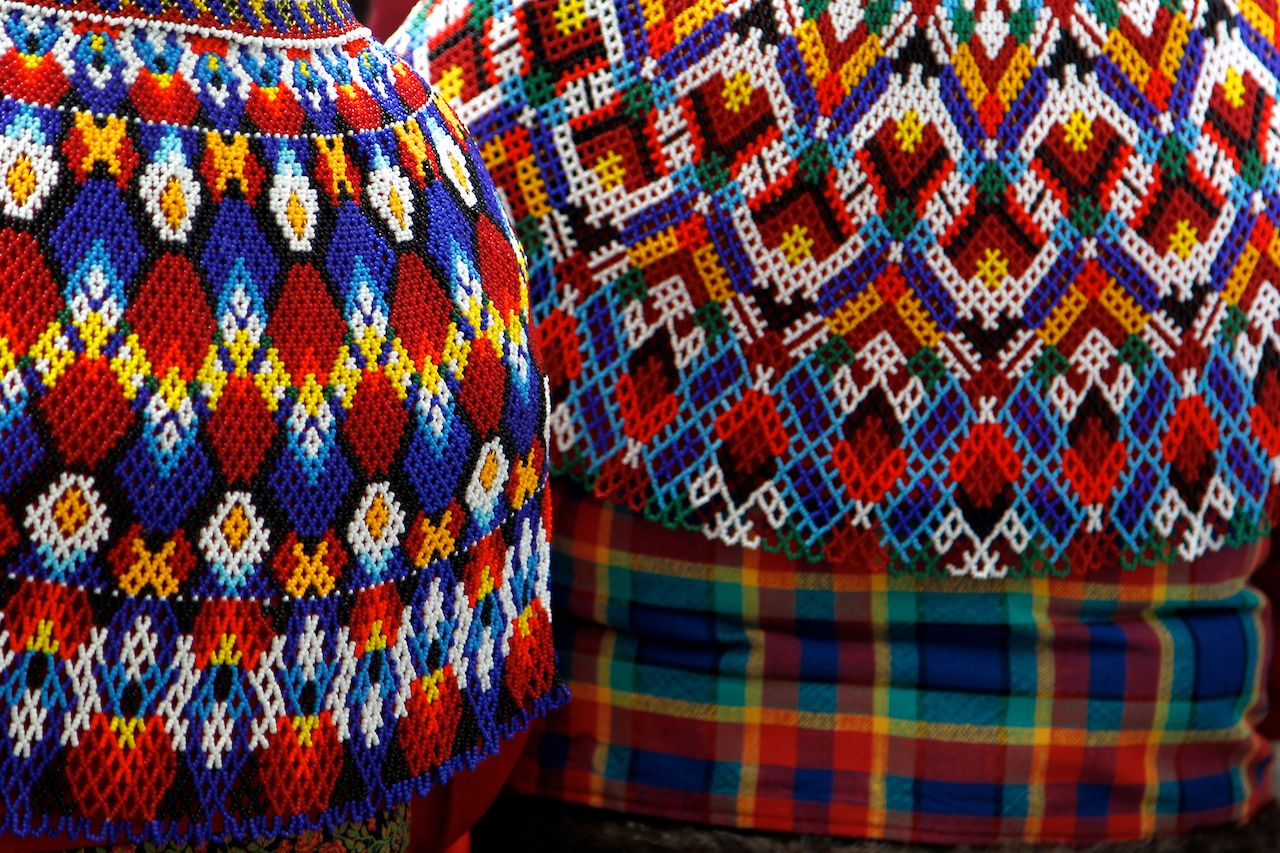 In the 17th century, Dutch whalers appear to have brought glass beads, which are believed to have originated in Venice, Italy. The Inuit formerly crafted beads of bone and tusk but used them minimally. When bead production became easier through various technological inventions, seed beads were used as a trade item and distributed all over the world, from countries in Africa to North America and Greenland.

Fabrics like silk, satin, and canvas were soon introduced. They were strong and could withstand the weight of the multi-colored imported beads. Other elements began to disappear, especially certain animal skins, as populations dwindled. Today seal and other animal skins are used in national clothing, but the usage of the animals is regulated.

The Moravians introduced ornate floral embroidery patterns that are still used throughout the country, but it was the Norse who brought wool to Greenland. The yoke patterns from this region are indeed influenced by Norse heritage.

Knitting, which is understood to have arrived in Greenland in the 1920s, is big in the village of Qassiarsuk, which is populated by descendants of Leif Ericson, an explorer from Iceland (who actually stepped foot on North America well before Columbus). Greenland’s sheep are similar to Icelandic sheep, with thick long wool.

Contemporary Greenlanders import sheep’s wool fabric for anoraks and wool yarn for knitting, mostly from Denmark. There is no spinning mill in Greenland to render sheep’s wool useable in any quantity. However, Greenlandic muskox yields a fiber called qiviut, which is spun into yarn by hand and sold in some stores. Usually, qiviut comes from slaughterhouse animals; the animals aren’t generally raised for fiber. 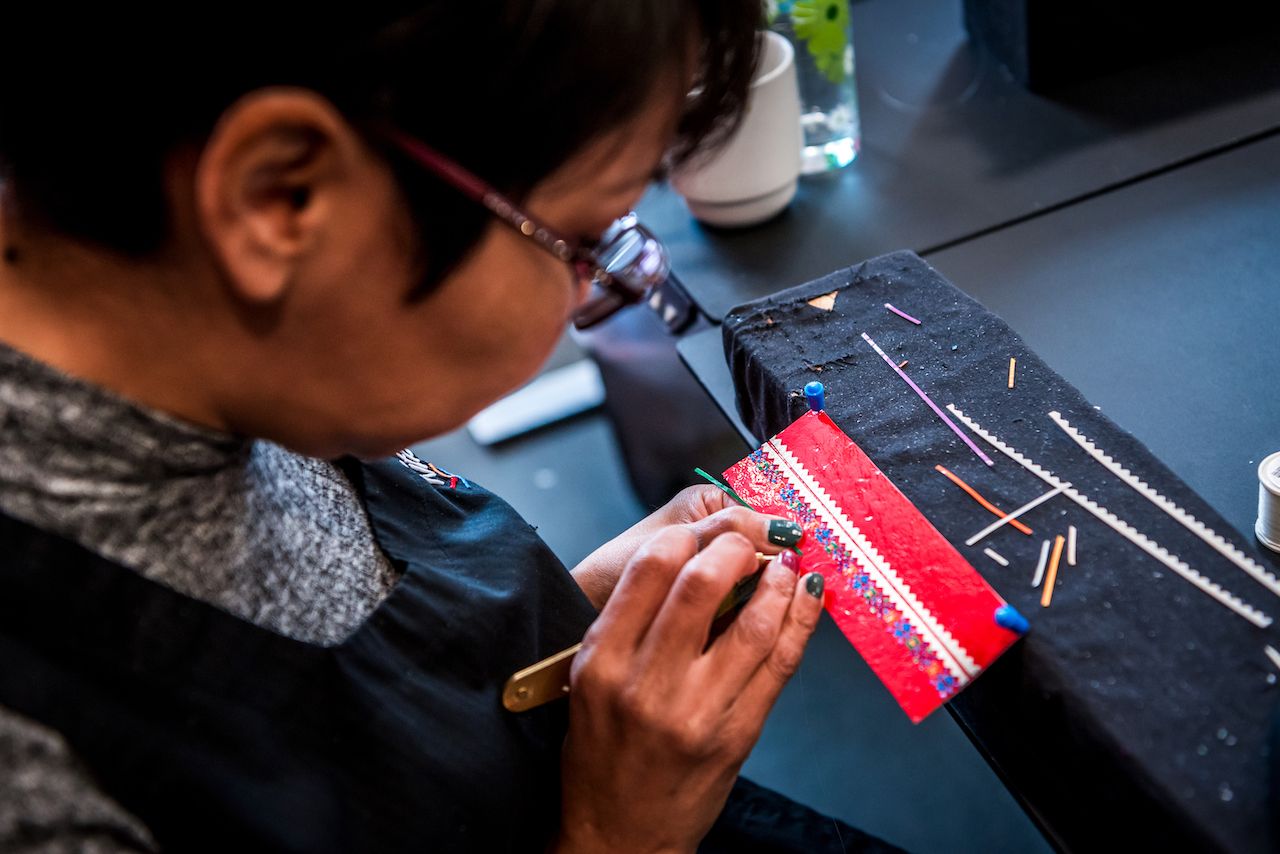 Crafting the clothing has always been a gendered skill. The ability to make the attire is considered “women’s magic.” It is women who treat the skins, sew, and string glass and pearl seed beads on a silken thread to create the ornate yokes.

The same Moravian missionaries who brought the embroidery patterns recommended that women should wear different colors depending on age and marital status. Kamik color signifies a lady’s age and marital status. Although the colors vary regionally, generally older, married women can wear blue, red, or yellow kamiks. Younger girls usually wear much more detailed boots with a white background. Today, the colors and styles signify not just the wearer’s age and experience but more so his or her regional homeland. 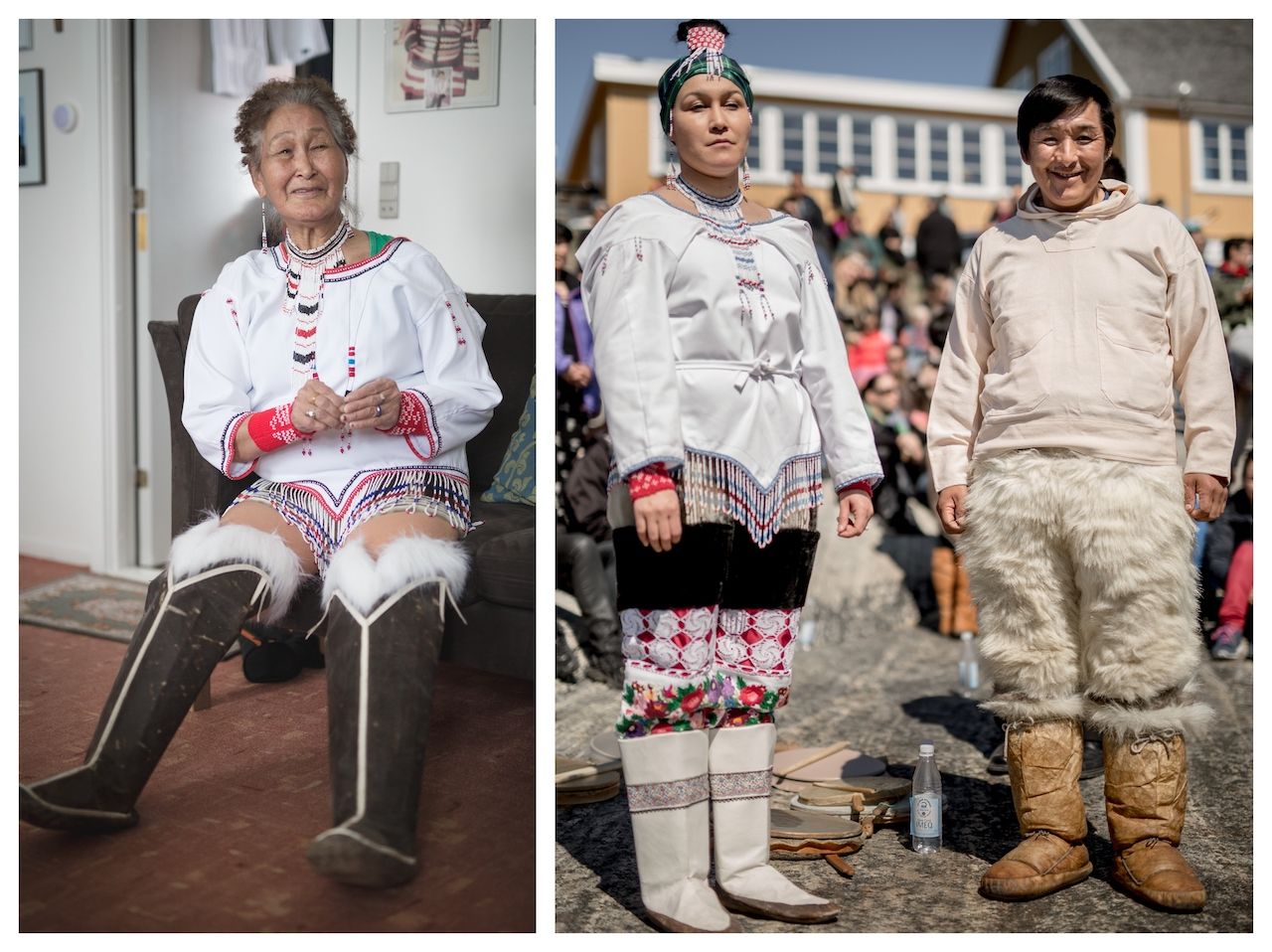 The colors and fabrics of the clothes correlate with the three distinct Greenlandic regions. In West Greenland, you see the multi-colored beaded collar and sealskin pants. That attire is called kalaallisut. In East Greenland, there are two versions of the national dress. One is mostly sealskin with a bit of embroidery or color; the other is sealskin pants and a simpler fabric top. Here, the attire is called tunumiutuut.

East Greenlanders demonstrate their regional affinity by wearing a fabric amaat, or anorak, instead of the West Greenlandic timmiaq. Increasingly, people are wearing the East Greenlandic style of kamik, made of young sealskin. Finally, the Thule area of far northwest Greenland has fox-skin pants and a black sealskin collar with long white kamik boots, sometimes made of polar bear skin. This region’s style is called arnatuut. 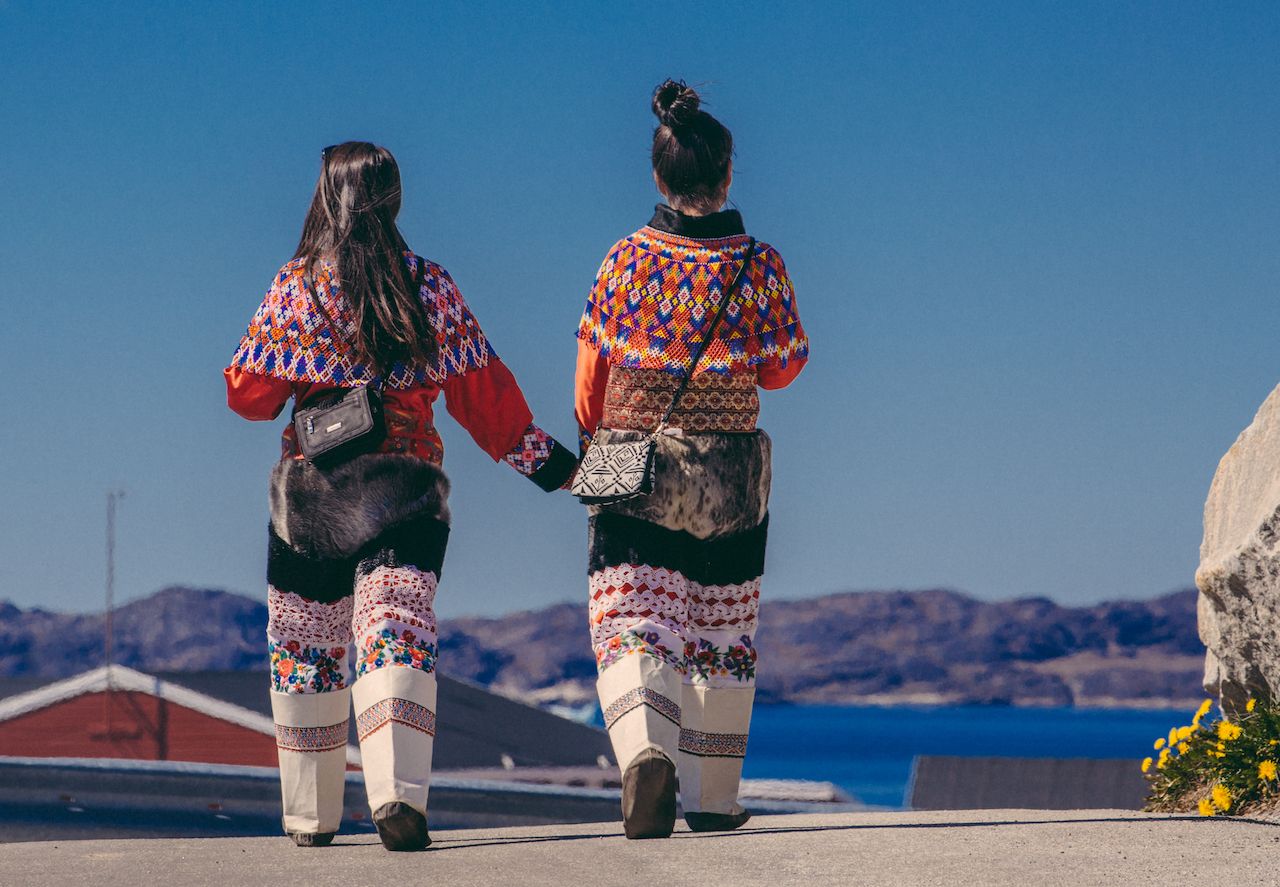 Today young Greenlanders, referred to as “The New Greenlanders,” are maintaining the traditional clothes but adding new elements from around the world — both new material and designs. National symbols are quickly being reinterpreted, and images of fashion are spread on social media. Purists argue that no one should touch the traditional symbols, but others emphasize that Greenlanders’ clothes have continually changed over the history of the land and will continue to do so, or fade away.

The gendered aspect is changing too. Today, male fashion designers proudly craft interpretations of the traditional garb and sell them to a cutting-edge international market.

Two government-sponsored schools teach the art of crafting the clothing: Kalaallisuuliornermik ilinniarfik is a two-year program in Greenland’s second city, Sisimut, and Systuen Kittat is in the capital city of Nuuk.

Where to see Greenland’s national dress

The Greenland National Museum & Archives in Nuuk features a permanent exhibit called “Lifestyle and Class Distinction.” Among other artifacts, the exhibit includes representatives of contemporary national dress. Admission to the museum is free, and it’s open most days year-round.

Examples of very early Arctic garments like mittens are on display at the University of Alaska – Fairbanks Museum of the North. These garments were crafted by the Thule people, the predecessors of the Inuit in Alaska, Greenland, and other northern regions.

Fashion5 Iconic Knitting Patterns From Around the World You Need To Master
Tagged
Fashion Greenland
What did you think of this story?
Meh
Good
Awesome