Picture yourself on a sunny autumn afternoon, sitting lakeside on a patio and sipping a chilled glass of Riesling from a local vineyard. Across Okanagan Lake, the rounded hills of the Thompson Plateau resemble a fall kaleidoscope — maple trees fluttering red, vineyard grapes turning purple on yellowing vines, and green ponderosa pines staying true to their hue. Earlier in the day you were cycling past golden larch trees high above town; tomorrow you’ll be paddling a kayak on the lake’s glassy blue surface.

Summer in Kelowna, an electric lakeside city set in BC’s mountainous heart, gets plenty of attention from beach-going travellers, but locals know fall is when this place shines brightest. The gradual leaf change isn’t “blink and you miss it” like in other parts of Canada — it starts in mid-September and lasts through October. What’s more, summer’s dog days give way to milder temperatures and there are fewer people on the trails. You can get out any time of day to hike, bike, paddle, or just soak in the scenery at a farm or vineyard.

Arguably every fall day in Kelowna is incredible, but here are six ways to make the season truly unforgettable.

1. Paddling a kayak or SUP on Okanagan Lake 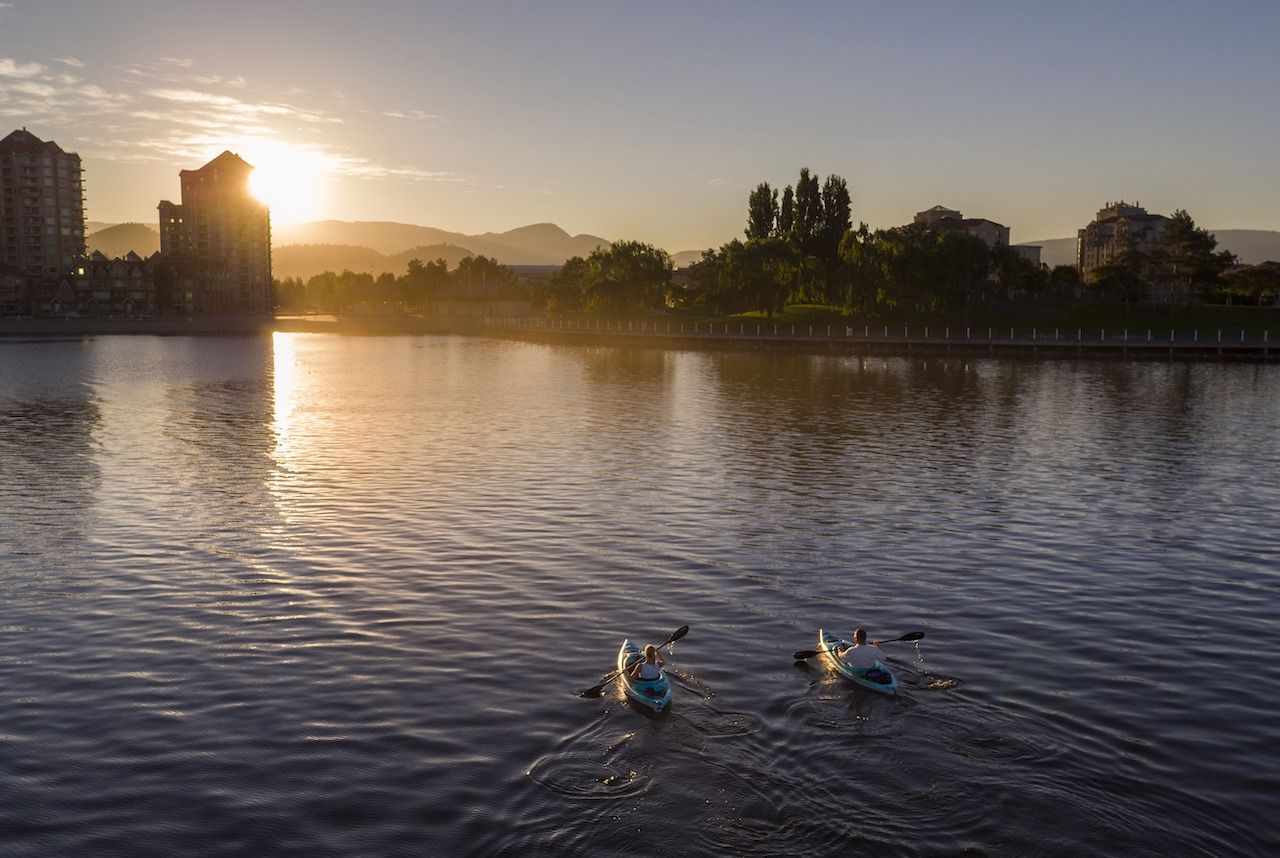 Getting out on the water is a must in this lakeside city. To ogle the sprawling lakefront homes and discover Kelowna’s secret coves and deserted beaches, BYO watercraft — or rent from Lakefront Sports Centre into early October — and explore part of the Kelowna Paddle Trail. This 27-kilometre water pathway hugs the shore from McKinley Beach in Lake Country to Bertram Creek Regional Park in south Kelowna, passing 20 beaches and parks, two bird sanctuaries, three lakeside resorts, and downtown along its way.

The trail is marked by 22 buoys that denote beach accesses and mark distances to help paddlers navigate. Kayaking the whole thing would be ambitious; instead, pick a smaller section and be sure to make a few stops for a fall swim or picnic. Highlights include Paul’s Tomb Beach with cliffs to launch off of; Rotary Marsh Park to listen for red-winged blackbirds chirruping among the cattails; and Boyce-Gyro Beach Park, where you can beach your kayak and walk to Shore Line Brewing Co. for a pint of craft beer. 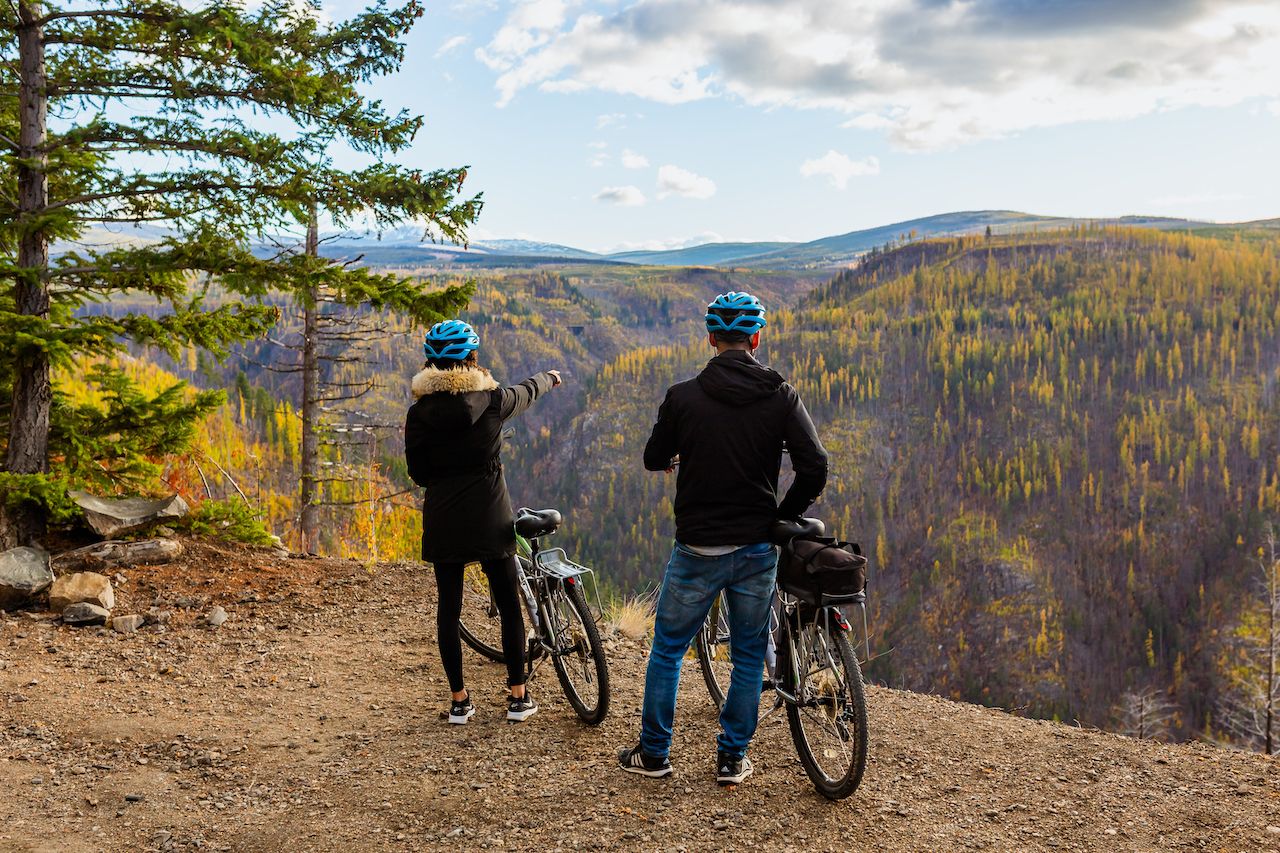 The 12-kilometre bike ride between Myra Station and Ruth Station along the Kettle Valley Rail Trail is stunning any time of year, but particularly so in mid-to-late October when the needles of the coniferous larch trees turn a brilliant yellow before blanketing the ground. You’ll be treated to nature’s palette of green, gold, and blue (thanks to the sky above and Okanagan Lake below) as you cycle over 18 wooden trestles and through two tunnels on Kelowna’s best-known ride, curving your way around the precipitous Myra Canyon.

Be sure to read the interpretive kiosk at the beginning of the path. It talks about the history of the now-decommissioned railway and the historic train trestles you’re about to cross. Once you start pedaling, remember to pause regularly to take in the vista (and snap some pictures) at a few of the viewpoints along the way.

Insider tip: Myra Canyon Bike Rentals operates through October 12; for a ride later in the season, you’ll need to bring your own bike or rent one in town and transport it to the trailhead.

3. Embarking on a farm adventure 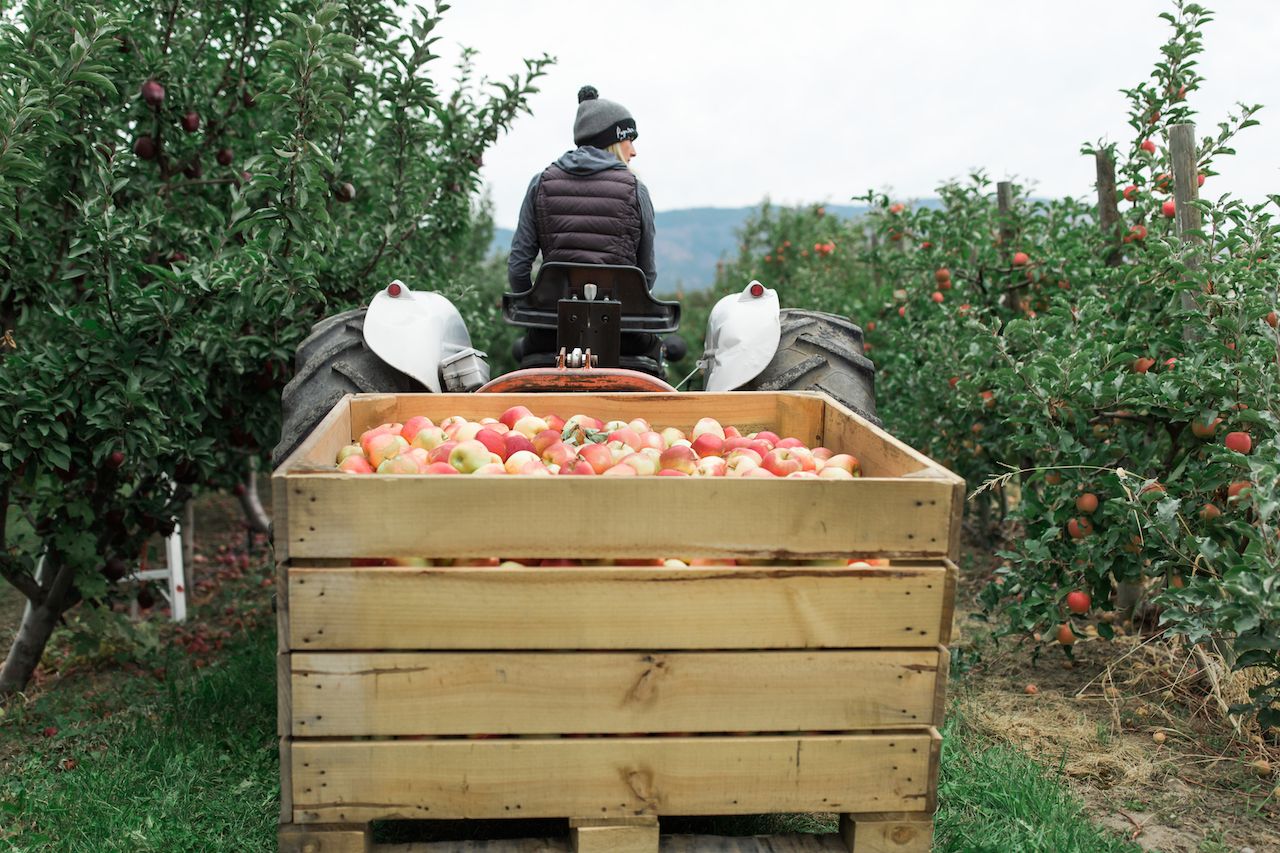 Over half of Kelowna’s land is zoned for agriculture, which is why there are so many orchards, vineyards, and farms within city limits. Not only does this patchwork of green fields and weathered wooden barns imbue a country drive with bucolic charm, it means you can stop and pet the farm animals or buy veggies directly from a local grower.

Head to southeast Kelowna for the full agro experience. Start at Don-O-Ray Farms to load up on fall flavours like sweet corn and purple cauliflower — there’s also a petting zoo for kids who want to meet goats or watch chickens scratch around. If you’re in town in October, visit McMillan Farms, where you can bump around the property on a hayride, get lost in the corn maze, or select your favourite orange gourd from the giant pumpkin patch.

As the day progresses toward happy hour, you’ll be pleased to know that some area farms produce booze. Meadow Vista Honey Wines has a tasting room with a number of different meads on offer, along with jars of honey to buy. (If the kids are old enough, send them on the self-guided garden and bee tour to see working hives.) For something stronger, Wiseacre Farm Distillery crafts vodka, gin, and seasonal liqueurs like lavender and rhubarb gin. You can also pick up fresh eggs (when available) from the farm’s flock, which will come in handy for shaking up that rhubarb-gin sour. 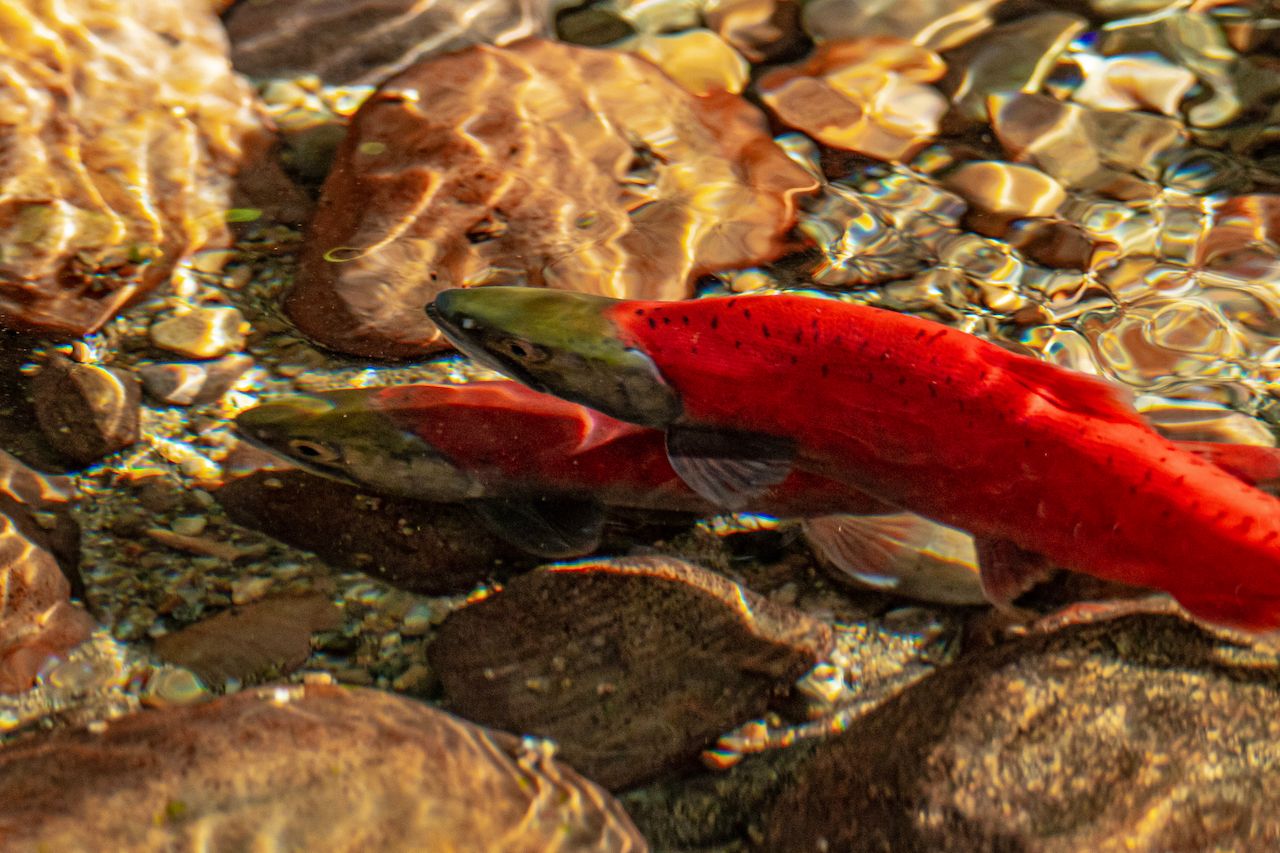 Everyone knows that salmon swim upstream to spawn in the fall, but what’s cool is that Okanagan salmon — called kokanee — are lake fish, so they live out their days landlocked in Okanagan Lake. After four years of lake living they turn colour, from silver-grey to fuschia, and swim up the lake’s tributaries to reproduce before they call it a life. This mad rush of kokanee peaks in late September and early October, when local creeks froth pink with their spawning.

One of the best places to see this annual phenomenon is right in town at Mission Creek Regional Park. In addition to the natural creek, there’s a dedicated salmon spawning channel built in the 1990s to improve the salmon’s chances of successfully producing offspring. Just follow the short Kokanee Trail that runs parallel to the channel to see the females flapping on their sides in the company of many suitors.

5. Taking a hike, bagging a volcano 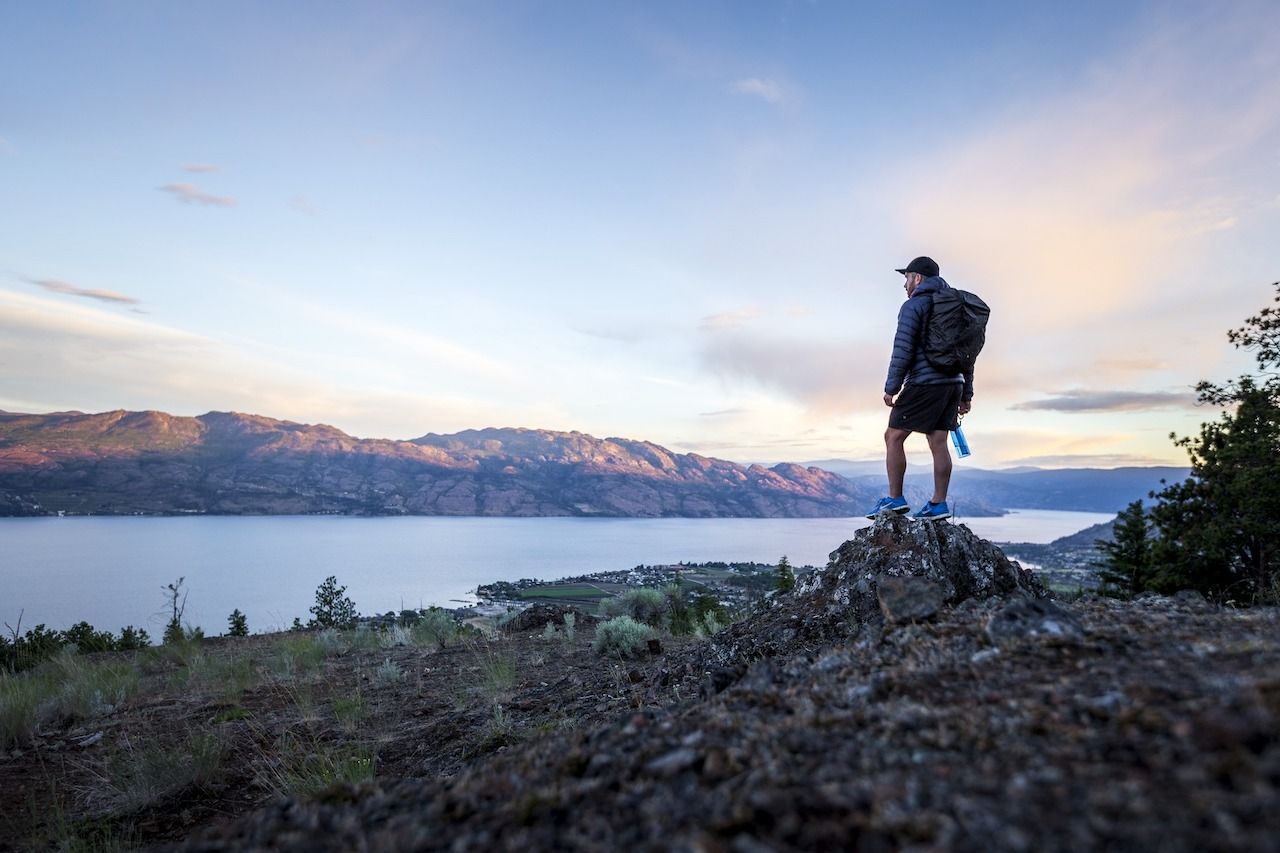 The landscape surrounding Kelowna is nothing if not dramatically scenic. Case in point: A string of extinct volcanoes forms a highland spine down the Okanagan Valley. And many of these peaks are climbable, including the largest, Mount Boucherie in West Kelowna.

The well-marked Boucherie Rush Trail ascends 300 metres in three kilometres as the path zigzags upward. Look for hardened lava flows, funky rock formations, and antelope brush — a species native to the Sonoran Desert that grows here — as you hoof it to the top of this 50-million-year-old eroded peak. Your reward for the steep climb is expansive, unimpeded views of the lake below and the valley unfurling south toward Penticton like an autumn quilt. 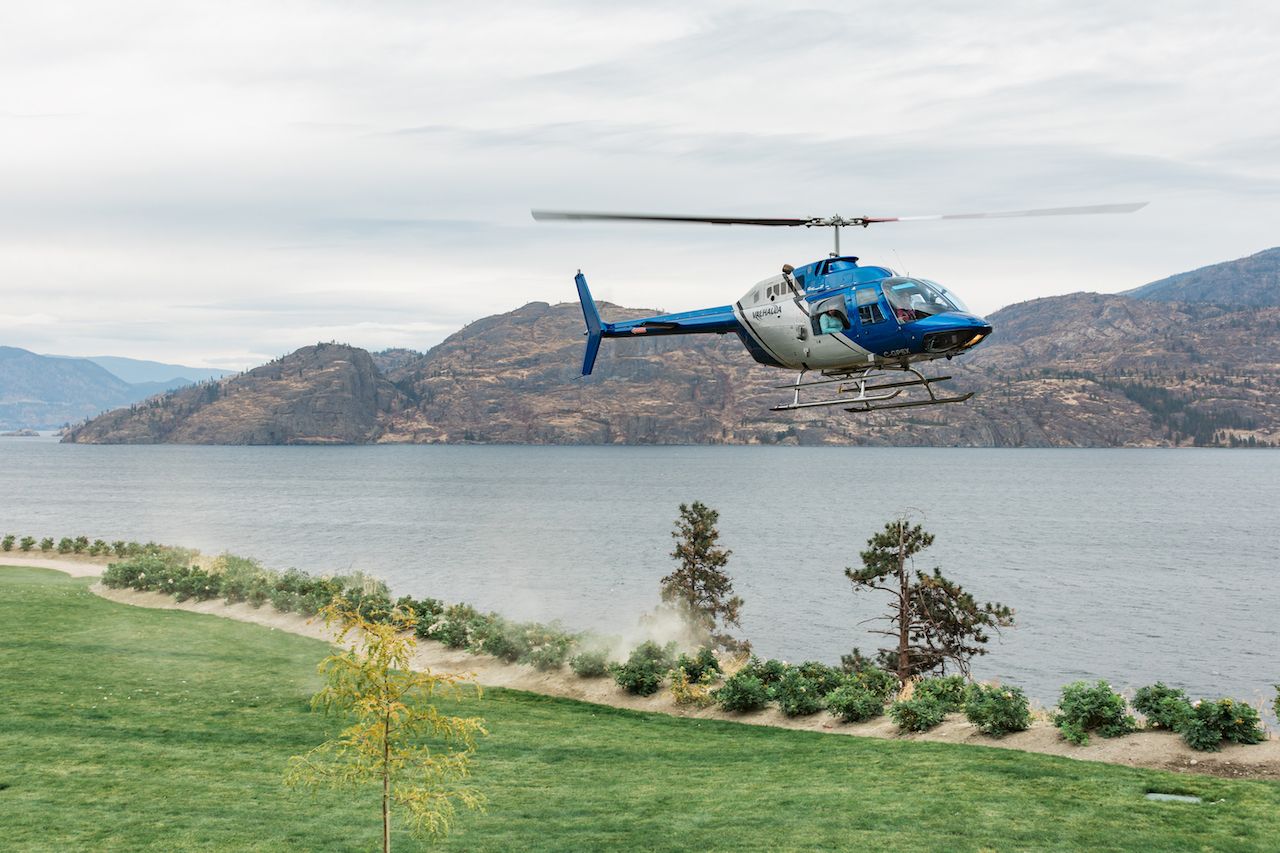 When your ride is a whirlybird, you can fly to any winery in the Okanagan Valley that has a heli-pad. That’s the rock-star idea behind the half- and full-day heli wine tours from Valhalla Helicopters, where you can literally drop in to wine tastings at some of Kelowna’s most scenic wineries, like Mission Hill Family Estate and Summerhill Pyramid Winery.

Another option is to take your wine game on the water. Sip Happens offers a Sip & Cruise Tour — a guide drives you to three wineries in Lake Country, north of town, then ships you off in a pontoon boat to cruise Okanagan Lake while you sample your recently purchased beverages on board.

These are six of Kelowna’s best autumn adventures, but there are many more fall experiences waiting in this scenic valley. Check out the Tourism Kelowna website for more ideas of how to make your trip unforgettable. 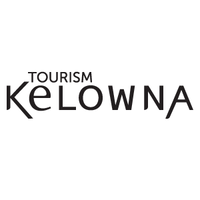 This post is proudly produced in partnership with Tourism Kelowna.
Tagged
Travel
What did you think of this story?
Meh
Good
Awesome

10 of the world’s best beer festivals in May