When people thinkof San Francisco, they think of the Golden Gate Bridge, sourdough, and Fernet. The city isn’t often thought of as an adventure destination — especially with Yosemite and Lake Tahoe so close by — but the San Francisco Bay Area holds adventure in its own right, and not just the foodie kind.

While it’s common for climbers to drive a minimum of three hours every single weekend in search of rocks, there’s rock climbing year round right in or next to San Francisco. In fact, elite professional climbers like Chris Sharma cut their teeth on the crags in and out of the Bay. So don’t sleep on San Francisco climbing. With plenty of climbing locations within and around the city, you can get out for a few hours or a full day, and still be back to enjoy all the fun evening activities associated with being in a large urban area.

A quick note: The Bay Area crags listed below can largely be navigated with Mountain Project. If you prefer physical copies of topo maps and routes, the best books are Bay Area Rock by Chris Summit and Bay Area Bouldering from SuperTopo. 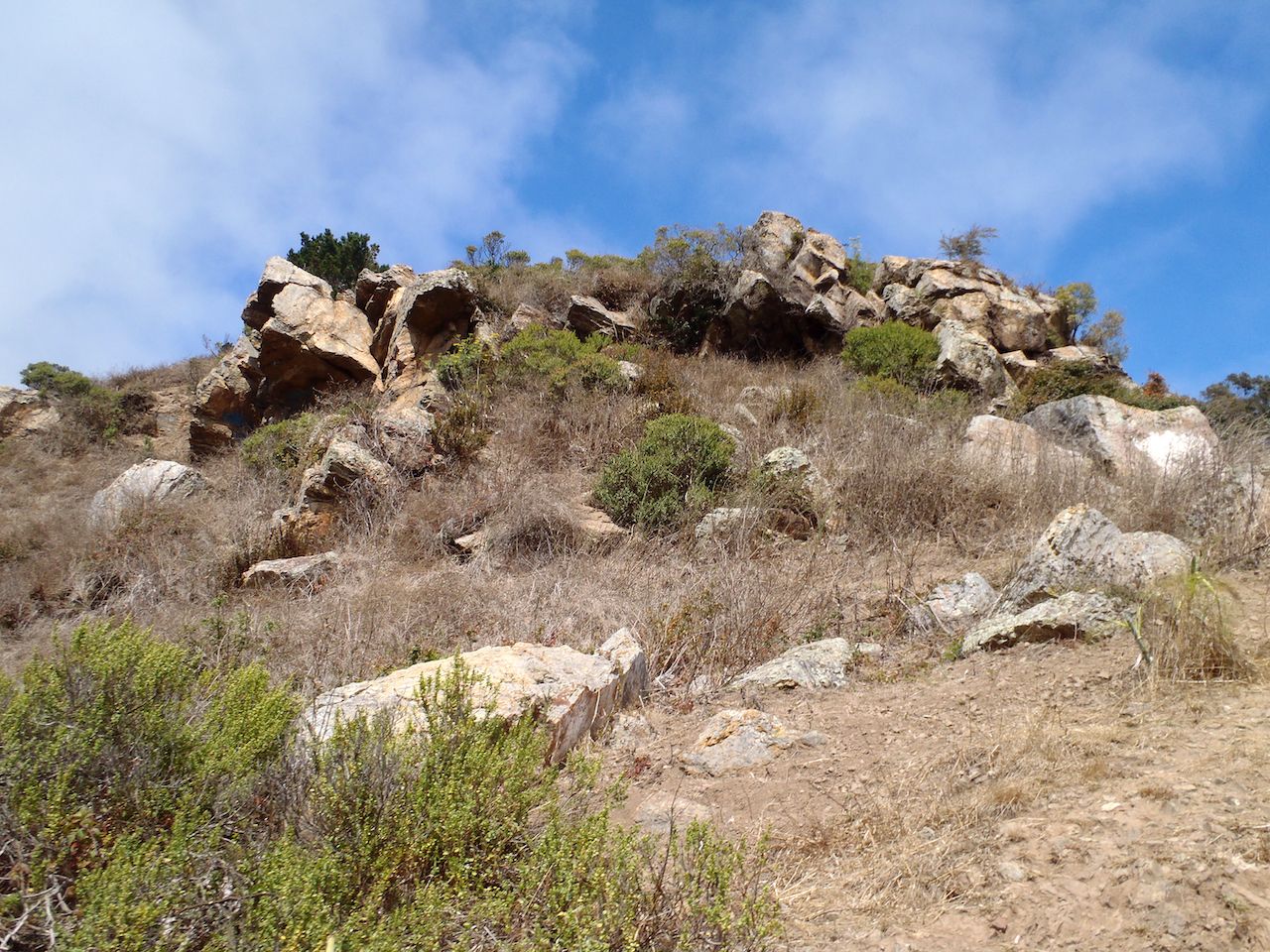 Within the city, Glen Canyon Park offers a handful of boulders for a solid few hours’ worth of climbing. Legend has it that many of the great Bay Area stonemasters trained here. The rock is radiolarian chert, layered sediment that lends itself to great incut jugs — meaning holds big enough to fit your hand inside. It’s a great spot to stop before or after work, or if you’ve got plans later in the day but you still want to get a workout in. The classic climb here is the Natural Act, V3, a highball reminiscent of the Buttermilks in Bishop. Getting there:Glen Canyon is easily accessible by BART, MUNI, or various ride-share apps.

Climbing in the East Bay 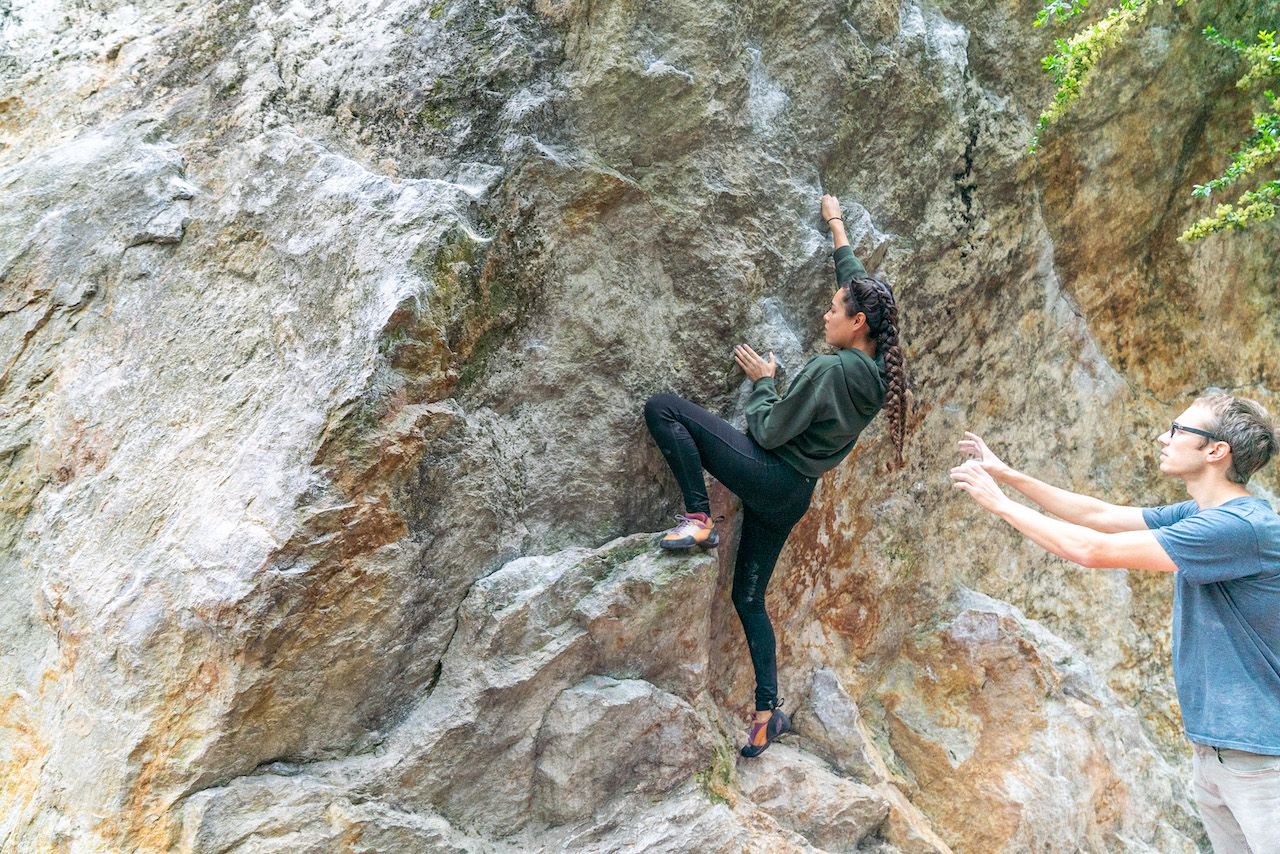 Climbers don’t have to venture across the bridge to climb on real rocks either. Across the Bay, Indian and Mortar Rock, and Cragmont offers an abundance of climbs, ranging from easy to difficult. These crags are a crucial part of Bay Area climbing history, as it’s here that many crusty climbers trained for the soaring walls of Yosemite.

Cragmont’s taller walls make it a suitable place to learn to climb on a rope, or to practice various climbing skills. Indian Rock and Mortar Rock, on the other hand, have long since been the Bay Area’s destination for challenging “problems,” as boulder routes are called. Anything graded above V10 is very difficult, and some of the problems here are a V13.

Indian Rock contains the most moderate climbs, while Mortar Rock contains primarily difficult problems. Many opt to warm up at Indian Rock before walking the three minutes to Mortar Rock to project; that is, to plan and execute a climb that may take a long time and many iterations to successfully complete.

Mortar and Indian Rock receive lots of traffic from the Bay Area and visiting climbers. You may not need to bring your crash pad, as there’s often so many crash pads that the rocks resemble a climbing gym. Classic climbs at Indian Rock include Beginner’s Face, Pegboard, and the spooky highball, Center Overhang. At Mortar Rock, must-dos include The Ramp and Black Plague.

The volcanic nature of the rock makes it an ideal climbing destination after it rains. The boulders dry out much more quickly and are less likely to break. These crags are located primarily in residential neighborhoods with little or no amenities. Climbers will need to make the short walk to Solano Avenue to relieve themselves. Getting there: Each of the parks are within an hour’s walk from BART, or accessible via ride-shares.

Climbing in the North Bay 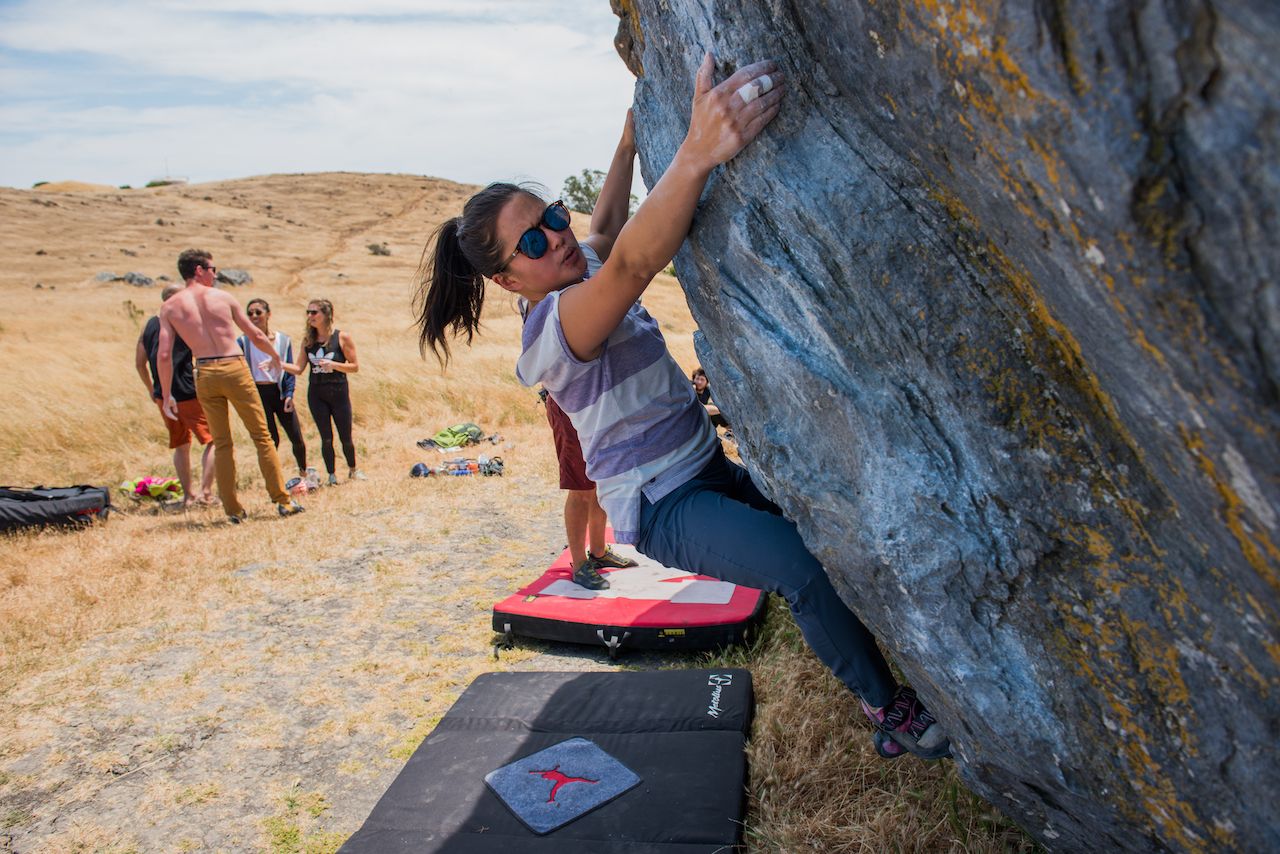 Just north of the Golden Gate Bridge in Marin County, Ring Mountain is an ideal place for newby climbers to get their fix. Composed of blueschist rock, Ring Mountain is accessible for newer climbers with easy boulder problems and even easier roped terrain. The main boulders are Split Rock, which is visible from the parking lot, and Turtle Rock, a short 10-minute hike away. Set up a top-rope anchor on Split Rock, or treat it as a highball boulder problem. Most of the climbs on this rock are easy with a walk-off the back to get down.

If heights aren’t your thing, make the walk to Turtle Rock, where most of the climbs are moderates V2 and under. If it looks like you can climb it, it’s probably been done. There are handfuls of variations and traverses from one problem to another. The easy climbing on Turtle Rock makes Ring Mountain an incredibly beginner-friendly Bay Area climbing destination.

Even if you don’t feel like climbing, this spot gives you 360-degree views of the north end of the Bay Area. It’s absolutely stunning. Getting there:You can reach Ring Mountain with ride-sharing apps, and there’s cell service to get you back. A bus can get you across the Golden Gate Bridge; if you have a bike, pop it on the bus bike rack and ride it the final stretch from the Corte Madera stop to the Ring Mountain Preserve. 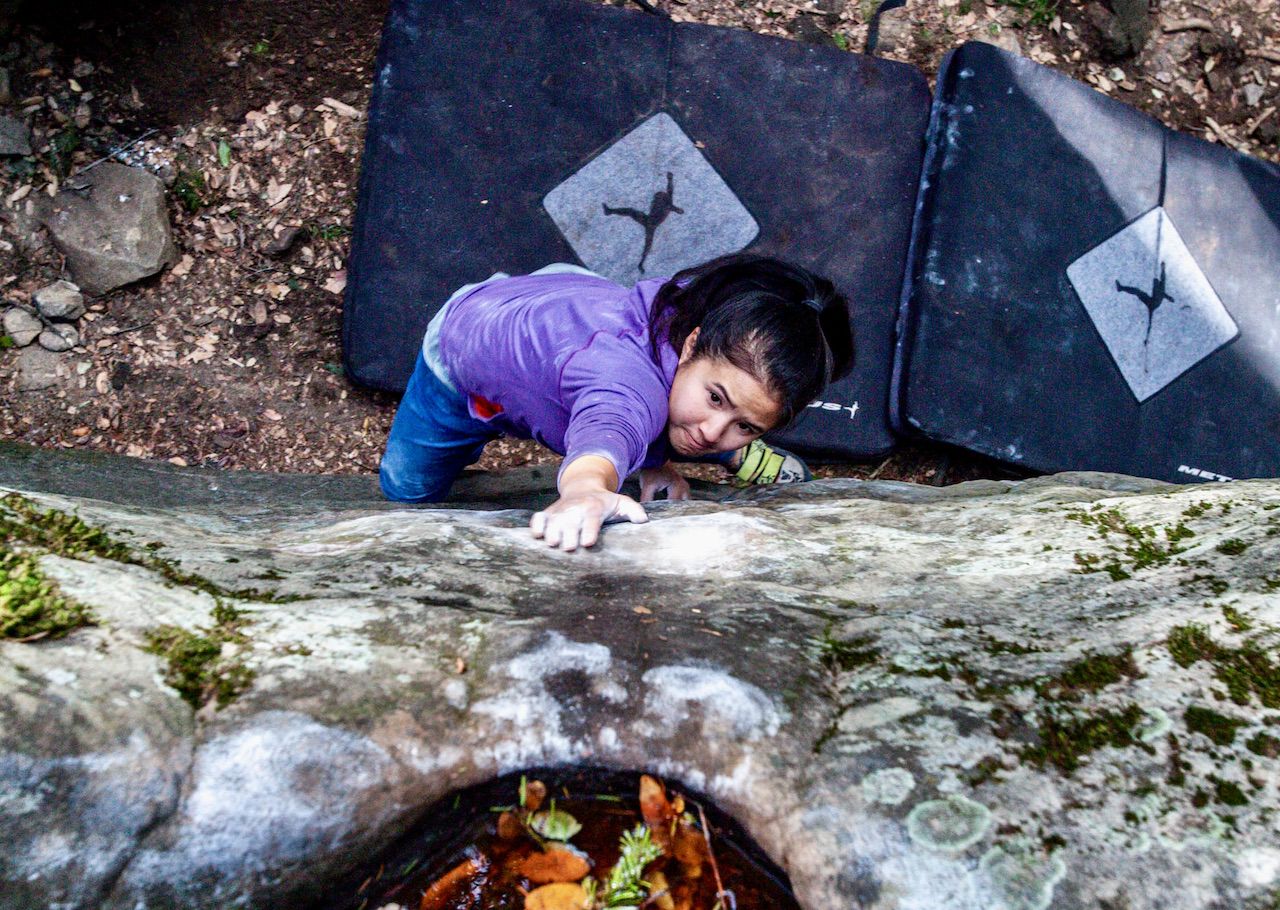 If you’re located in the southern portions of the Bay Area, Castle Rock State Park is the premiere destination. Castle Rock and the surrounding areas have a little bit of everything for everyone, from roped climbs to boulders. This area is significant in rock climbing history with old-school climbing legends, putting up difficult first ascents and test pieces. The grading here is notoriously sandbagged, with routes often much tougher to ascend than the numbers would suggest .

Castle Rock State Park is located in the Santa Cruz Mountains. Popular boulder problems at Castle Rock State Park include the Beak Traverse, the Spoon, Bates Problem, and Lost Keys Traverse. Popular roped climbs include Blowing Bubbles, Vicious Circle, and the Great Roof. Because Castle Rock State Park and the surrounding areas are all made of sandstone, make sure you wait at least 48-36 hours after it rains to climb. Sandstone is incredibly fragile and will break when it is wet. If it rained recently, please opt to climb at any of the other crags listed here.

Getting there:Castle Rock is accessible via ride-sharing apps, but will cost you an arm and a leg. Cell service is minimal, but available in certain spots to find your way home. Driving with your own or a rented car and sharing the cost with friends is the way to go. 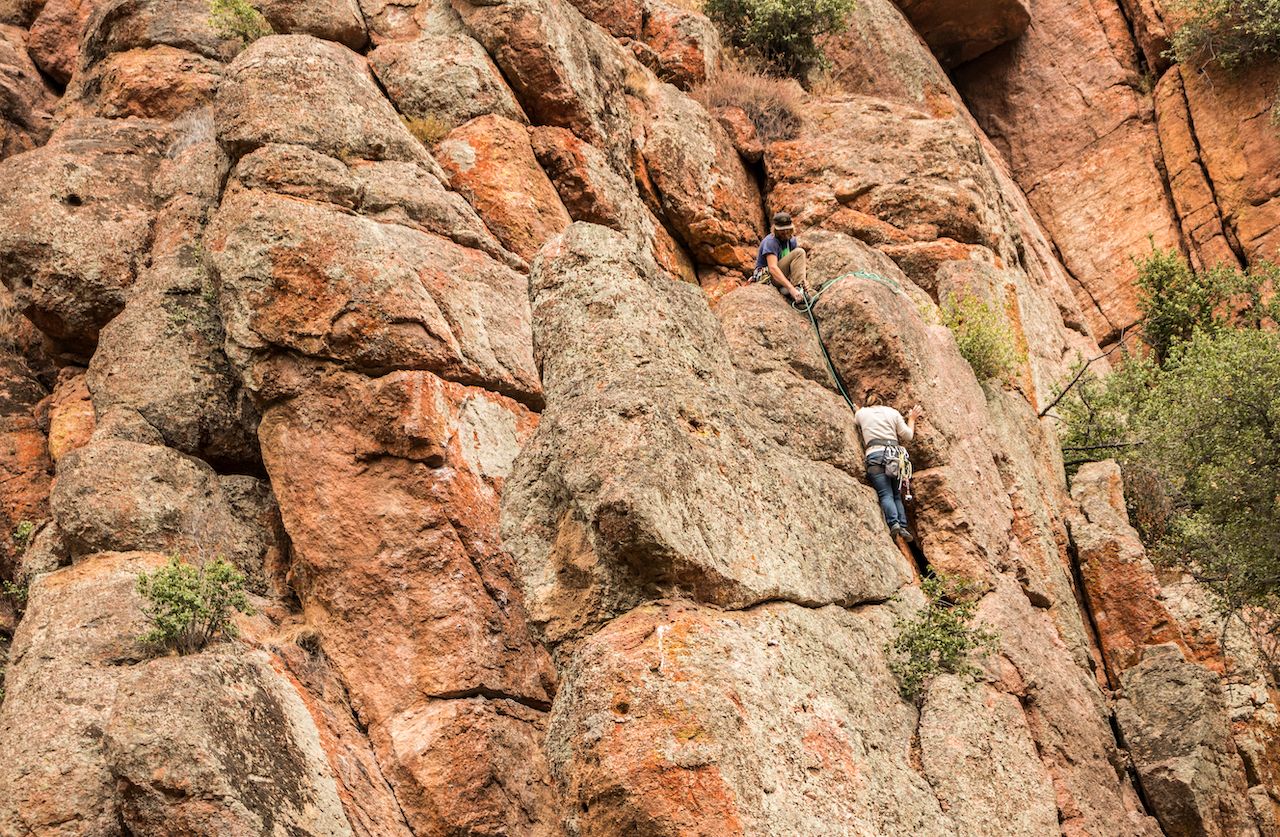 For a full value day on ropes, head to Pinnacles National Park. It’s got a bit of adventure and spice. Note that the bolt spacing can be questionable with many runouts, or gaps between you and the next bolt, as the majority of routes were bolted from the ground up. Critically, the volcanic rock can be less than solid with cobbles prone to popping out from under your appendages at any given time. Classic areas include the Monolith and Discovery Wall, where cobbles are less likely to fall out because of the high traffic.

Unlike the other Bay Area crags, Pinnacles is the only destination with a climbing season. Late fall and winter provide the best temperatures for climbing; although winter can also bring rain. In the spring, many of the walls are closed for raptor nesting; which walls and routes are indicated on the Friends of Pinnacles website. Summer sees scorching hot temperatures, so only climb here during that time if you enjoy suffering and sunburn.

Whichever season you come, the park is incredibly beautiful and well worth the drive. Despite the soft rock and seasonal limitations, the towers that give the park its name, and the sheer quantity of climbing routes make this park a huge draw for climbers. The area has its own climbers guidebook, written before it was designated a national park, called Climber’s Guide to Pinnacles National Monument by Brad Young.