There are rows of vendors and shops at the Bugu Bazaar in Karakol, Kyrgyzstan. Each is organized by theme, like jewelry and household items. As I followed my Destination Karakol food tour guide, we approached the most important row of them all: ashlan-fu alley.

Ashlan-fu is a popular dish with Chinese origins that’s synonymous with the city. The spicy soup is typically served cold, and includes pulled Laghman noodles, starch strips, egg, meat, garlic, tomatoes, crushed red peppers, and vinegar. It’s the perfect salve for the many backpackers on their way to and from some of the country’s best adventure destinations and hikers in need of a hearty meal.

On ashlan-fu alley, I’m led to Saida’s, a location that serves an average of 600 bowls a day at just 30 Kyrgyz som a piece (less than 50 cents). When we arrived, it was filled to capacity. Still, the kitchen staff of just two women put together bowls of ashlan-fu by the half dozen with ease. I was salivating as our guide placed the individual bowls on the table in front of us along with extra chili and a basket of fried bread. As we dug in, our guide told us the lunch crowd was light compared to what you’d find on a Sunday. He motioned us forward as if to reveal a secret, and with a playful smile said, “That’s because ashlan-fu is thought by many to be a hangover cure.” 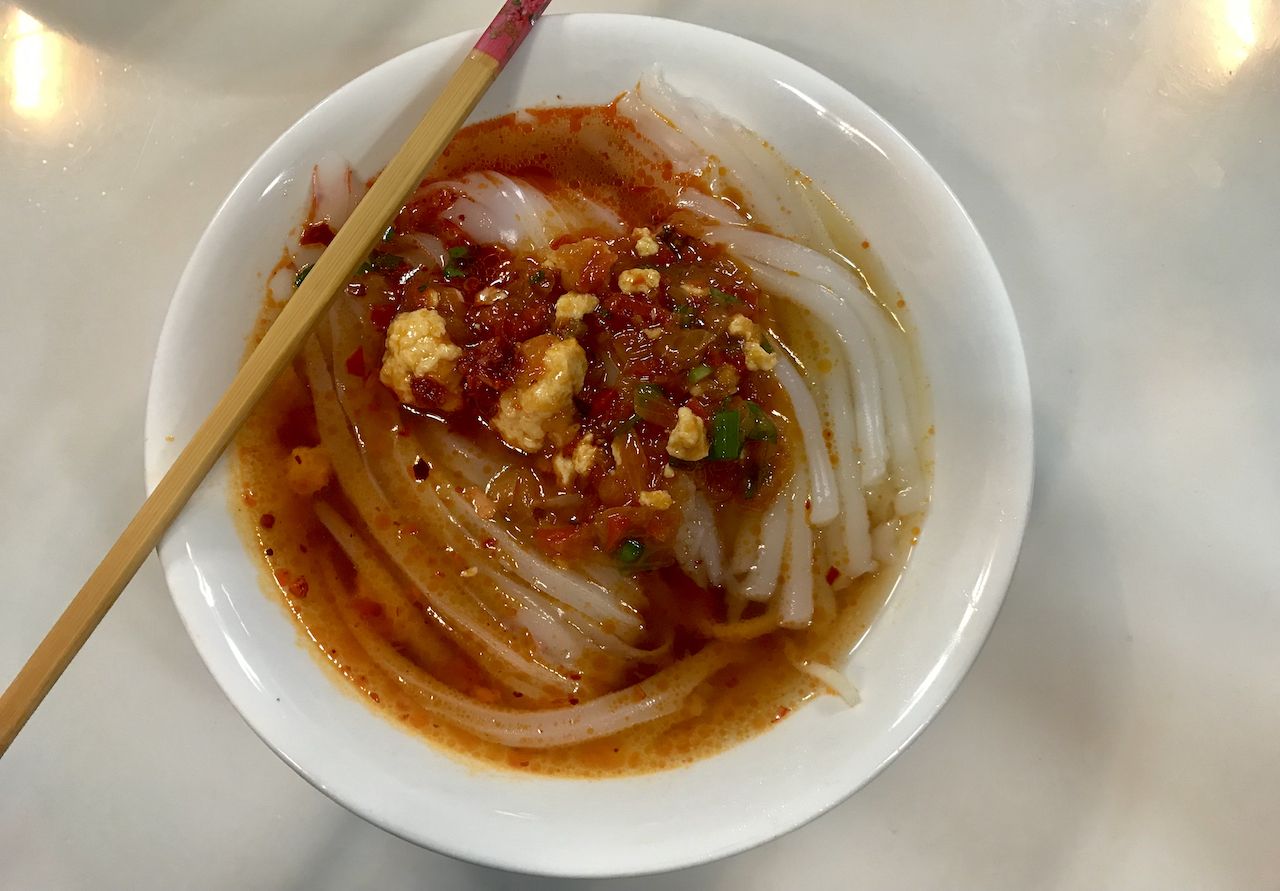 On Sundays, I learned, you can expect to see the same faces in ashlan-fu alley that you saw at Fat Cat, a local favorite bar, on Saturday night. The Kyrgyz people have a responsible drinking culture and don’t consume copious amounts of alcohol, but they love a good party. Particularly when it comes to nuptials. Perhaps that’s why one wedding party asked the shop owner to prepare 400 dishes of ashlan-fu to-go for their ceremony.

While the soup is sometimes served warm in the winter, it’s traditionally served cold, which offsets the strong spice and vinegar. The noodles are handmade and stretched long to represent a long life. The opaque starch strips are made with potato, corn, or beans by allowing the starch to cool into a mass before being carved into shape with a grater. It’s a process I tried myself the next day while having lunch at a Dungan village.

Ashlan-fu comes from the Dungan people, a Chinese-Muslim minority that fled to Kyrgyzstan (at the time a part of imperial Russia) following a failed revolt in China in the late 1870s. The Dungans who made it to Kyrgyzstan were farmers new to a region of many nomads. One of the primary villages they settled is Yrdyk, just outside of Karakol. The community was accepted by the people of Russia, in large part because of the farmed crops and dishes like ashlan-fu. In 1897, two Russian writers described Dungan cuisine as “very tasty and of great variety.” The Dungan diaspora wasn’t as embraced during the Soviet years. Yet ashlan-fu didn’t fade into obscurity. 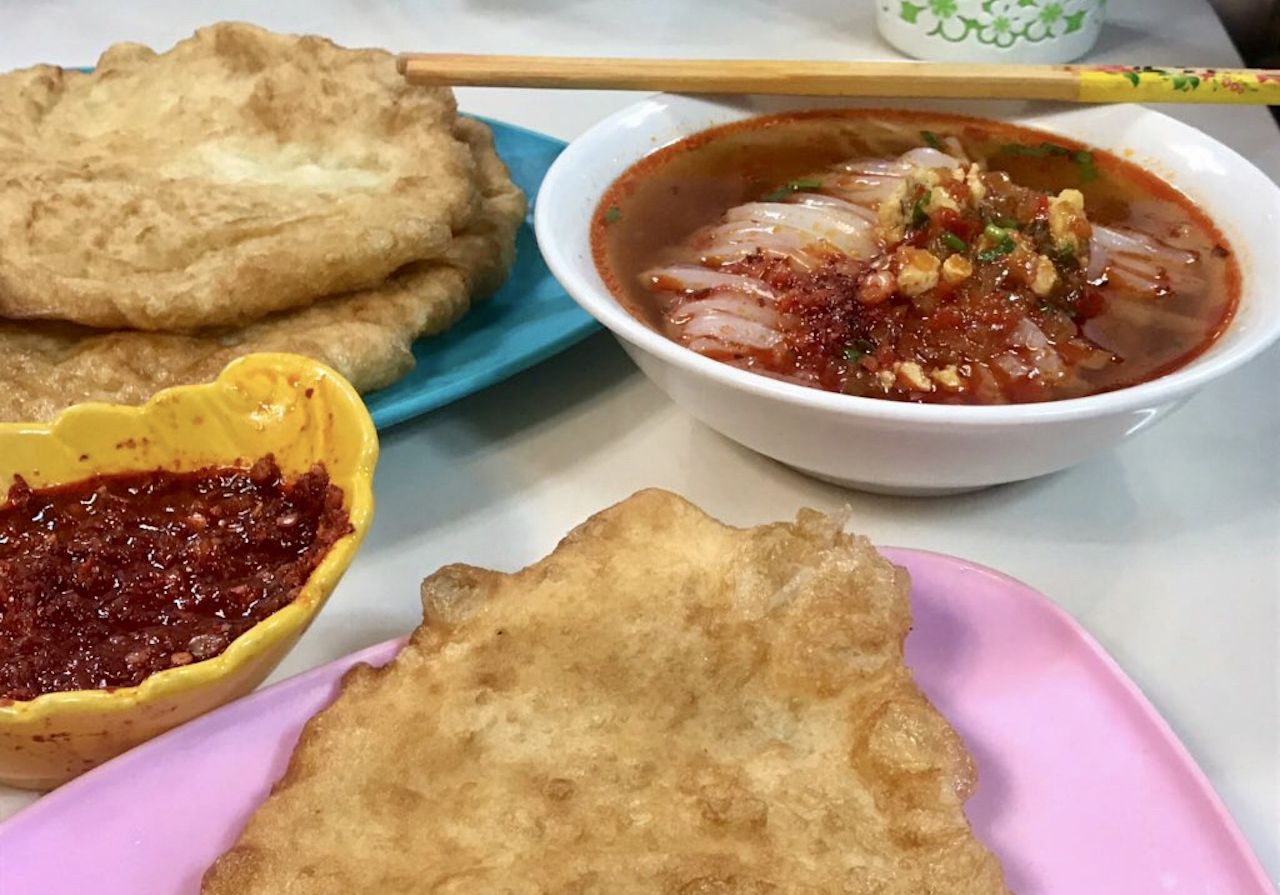 Today, the dish is just as popular as ever — especially for the late night (and morning after) crowd on the always-open ashlan-fu alley. For another taste of the traditional dish, Destination Karakol offers a Dungan Family Dinner experience where you can learn about history, culture, and, yes, cuisine. The hosts are local families near Karakol who agree to have visitors for lunch, allowing you to sample an eight-course meal in their home that includes assembly of your own ashlan-fu dish.

I watched our host run through the process twice before attempting it myself. The noodles were already in the bowl. My job was to add premixed spices, grate the starch strips, and finish the dish off with vinegar. The starch was gelatinous and more difficult to grate than I anticipated, coming out in mismatched chunks instead of uniform strips. 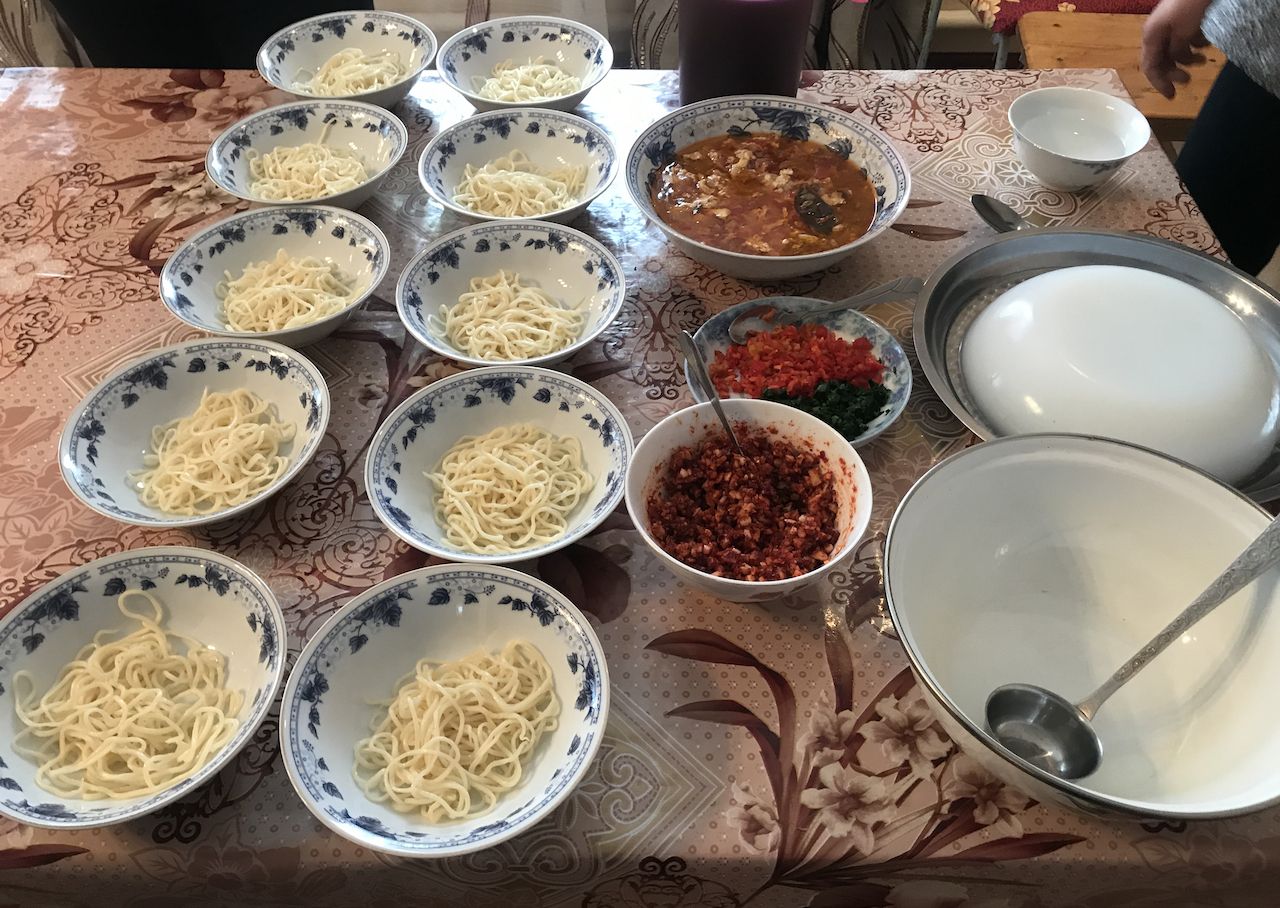 The taste more than made up for my lack of craftsmanship and I ate it all before remembering to pace myself for seven more dishes. Each family has their own secret recipe, adding a distinct flare to an otherwise common dish. The basic elements remain in place but no two households serve the same meal. Hot or cold, spicy or mild, vegetarian or meaty — it’s easy to customize ashlan-fu the way you like it.

The one thing you’re guaranteed consistency with is the satisfied feeling you get after consuming a meal that gets your blood flowing and fills your belly after a night of celebrations.

Food + DrinkNaxi Cuisine Is the Chinese Food You’ve Been Missing Out On
Tagged
Food + Drink Kyrgyzstan
What did you think of this story?
Meh
Good
Awesome

This Is Kyrygzstan at Ground Level

The Mountains of Kyrgyzstan