Kid-friendly Vegas? It’s not just real, it’s everywhere! While Las Vegas might not be the most obvious choice for a family-friendly destination, there is plenty for you and the kids to do together.

The best hotels for families

There are many sprawling casino-resorts on and around the Strip, and all of them cater to different kinds of clientele. Some are decidedly more adult; others are geared specifically at families with young children; others still fall somewhere in the middle, but have plenty to offer for vacationing families.

If the name alone weren’t enough of a clue, Circus Circus is a family-friendly circus-themed resort and casino complete with a five-acre indoor theme park, Adventuredome. Get all-day ride passes for the family for just $32.95 for those 48 inches and taller, and $18.95 for those under 48-inches, and ride and play to your heart’s content on two roller coasters, Batman-themed laser tag, bumper cars, a pirate ship, 4-D Ice Age and SpongeBob SquarePants rides, and so much more. While you’re there don’t miss the famous Midway complete with carnival games, live circus performers, and a state-of-the-art arcade. Oh, and staying here is CHEAP. 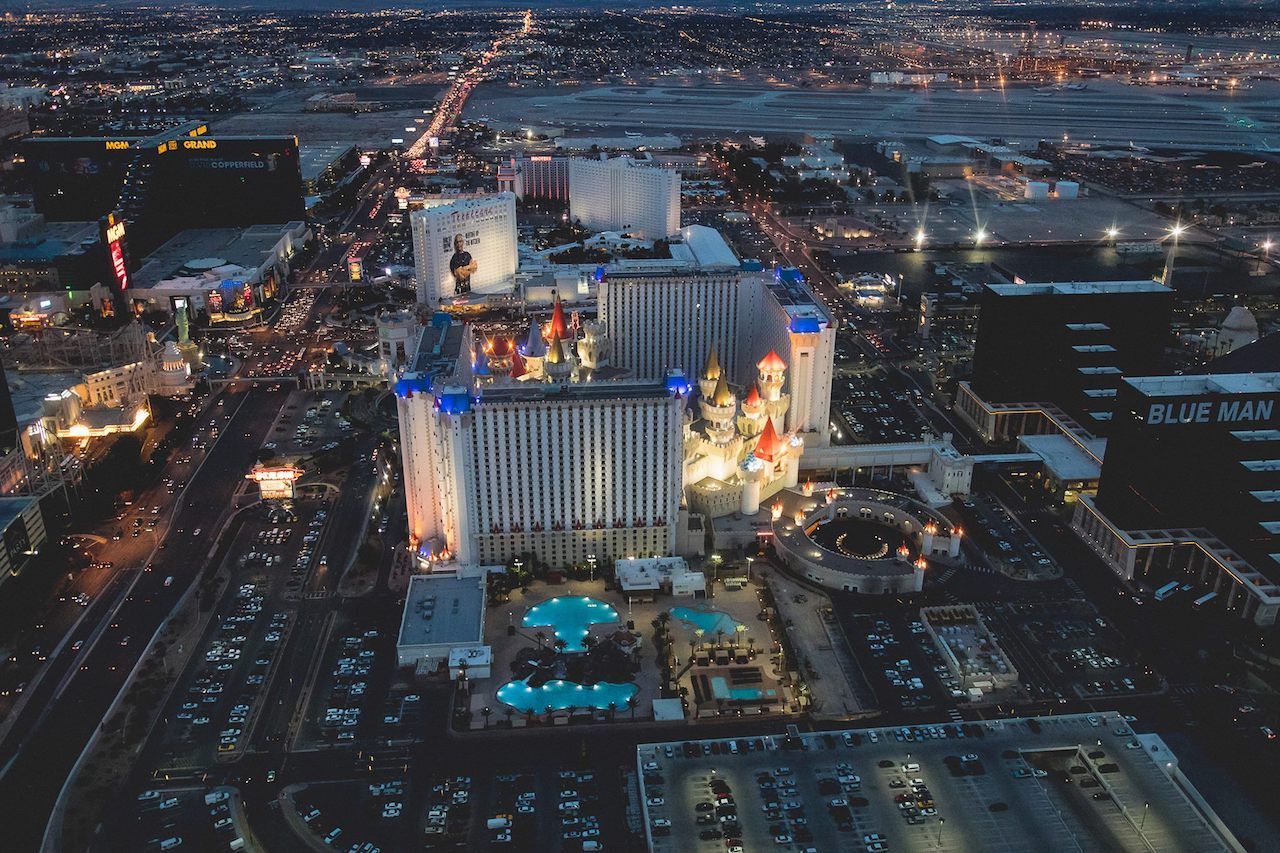 Excalibur is a casino resort styled as a Disney-esque castle of Camelot, and it’s the cheapest property on the south end of the Strip (so, basically, it’s the second-cheapest property on the Strip after Circus Circus). It’s a hotel built with kids in mind, and staying here puts you right in the heart of some of the top kid-friendly attractions on the Strip. Inside the Excalibur itself is the Tournament of Kings Medieval-themed dinner theatre complete with jousting knights and Cornish game hen. At the next property over, the Ancient Egypt-themed Luxor, you’ll find the Blue Man Group, a popular show for kids and grown-ups alike. The next property over from the Luxor is Mandalay Bay, where you’ll find 2,000 animals — over 100 different species — displayed throughout 14 different exhibits at the Shark Reef Aquarium, as well as the 1.3-million-gallon sprawling Shipwreck Exhibit with over 30 sharks, stingrays, sawfish, green sea turtles, and schools of colorful fish. There is also a “Touch Pool” where, yes, you can touch the ever-changing collecting of aquatic animals. And all three of these properties are connected via monorail, so it’s easy to get from one to the next. 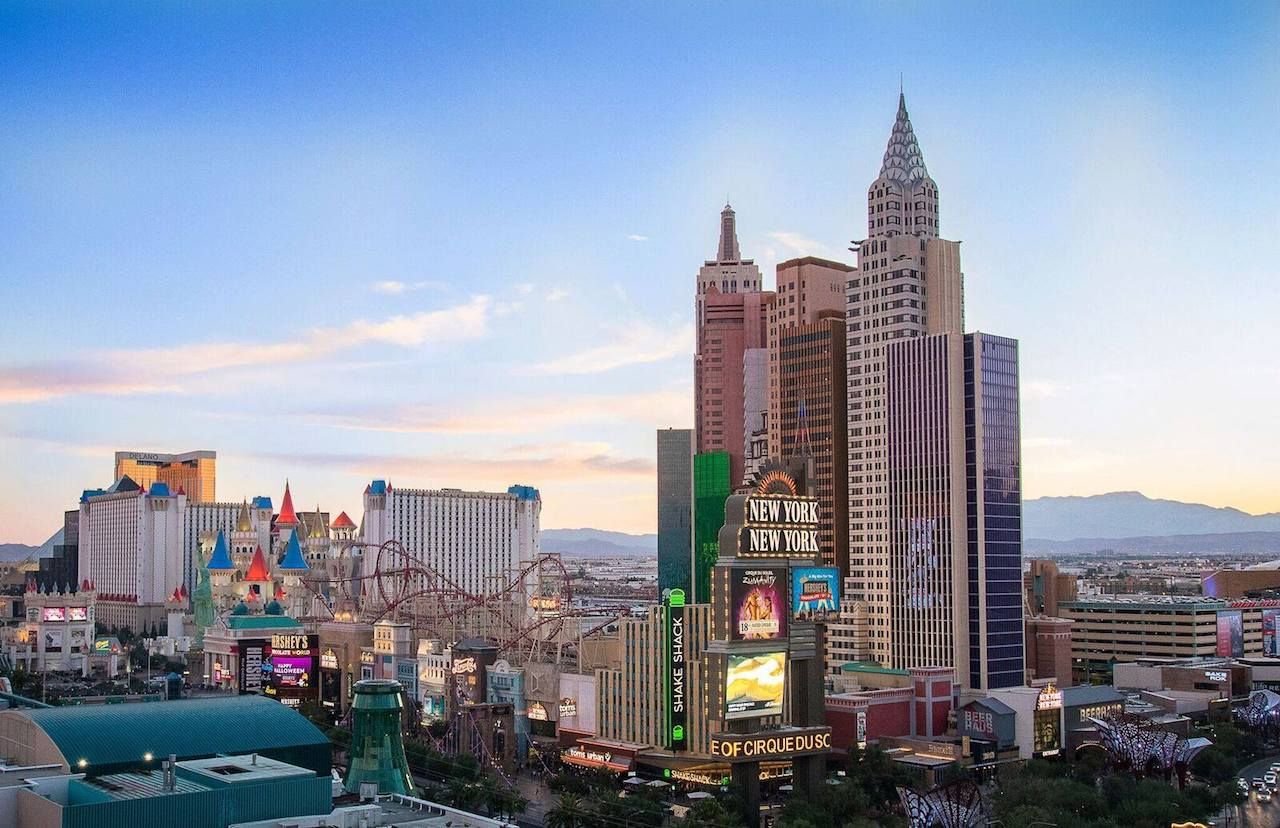 For a lot of kids, the New York-New York Hotel & Casino is their first experience of the Big Apple, simulated or otherwise. Another one of the more affordable properties on the Strip, New York-New York is another themed casino that takes its simulation of the city of New York as seriously as New Yorkers themselves take the actual one. The attention to detail here should not be overlooked: there are brick-paved “streets” with manhole covers lined with brownstone buildings with exterior fire escapes, not to mention real Jewish delis and Italian pizzerias throughout. The New York depicted here is the New York of the mid-’90s when it was built — the New York of Friends and Seinfeld. That New York is already all but extinct, making this casino also something of a throwback-cum-historical museum. And nothing beats seeing the Statue of Liberty and Empire State Building out front, especially with the Big Apple Coaster wrapping around them (a must-do when visiting Vegas with the kids). While you’re here, you also have to hit up the 13,000-square-foot Hershey’s Chocolate World in front of New York-New York (behind the Brooklyn Bridge), with its own Statue of Liberty made out of nearly 800 pounds of Hershey’s Milk Chocolate. Across the street at Showcase Mall you’ll find its competitor, M&Ms World, a 28,000-square-foot, four-level immersive M&Ms experience. 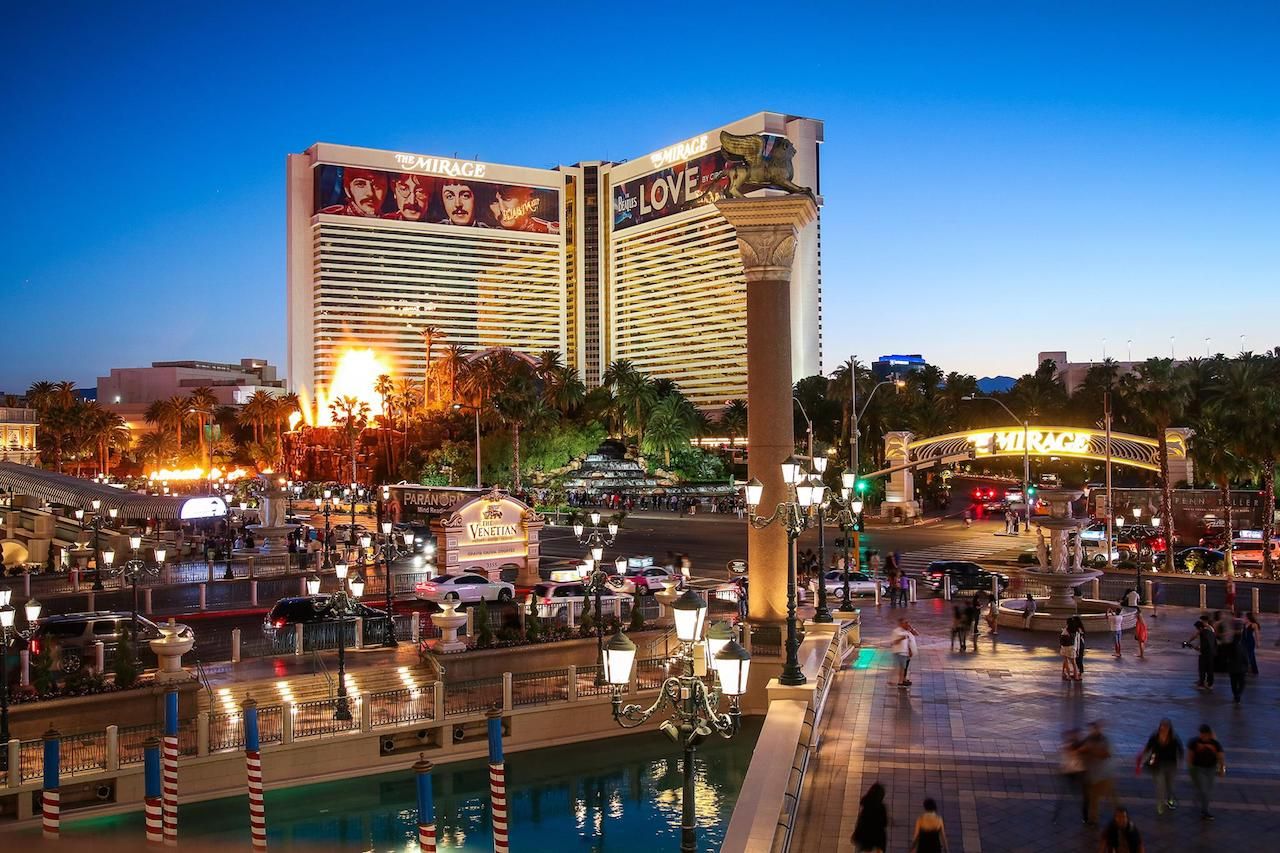 The Mirage is known for one of the most iconic things in Las Vegas: The Volcano. Located out front on the Strip for all to see is the volcano that explodes every night at 8 PM and 9 PM (as well as 10 PM on Fridays and Saturdays), and is another Vegas bucket list attraction. This property is a bit more upscale than the others, though by no means outrageously expensive. Right next door to the Mirage is Treasure Island, where the kids will most certainly enjoy the Marvel Avengers S.T.A.T.I.O.N., a completely immersive experience that brings visitors into the world of The Avengers. And across the street at The Venetian is Madame Tussauds, where your kids can take selfies with all their favorite stars (in lifelike wax form).

The best shows for families

There are certainly a lot of naughty nudie shows in Vegas, and many of them are found in the very same properties where the most kid-friendly shows play. Gotta have something for everyone! That said, there are PLENTY of shows we haven’t yet mentioned that are appropriate for all (or most) ages that adults will enjoy too. 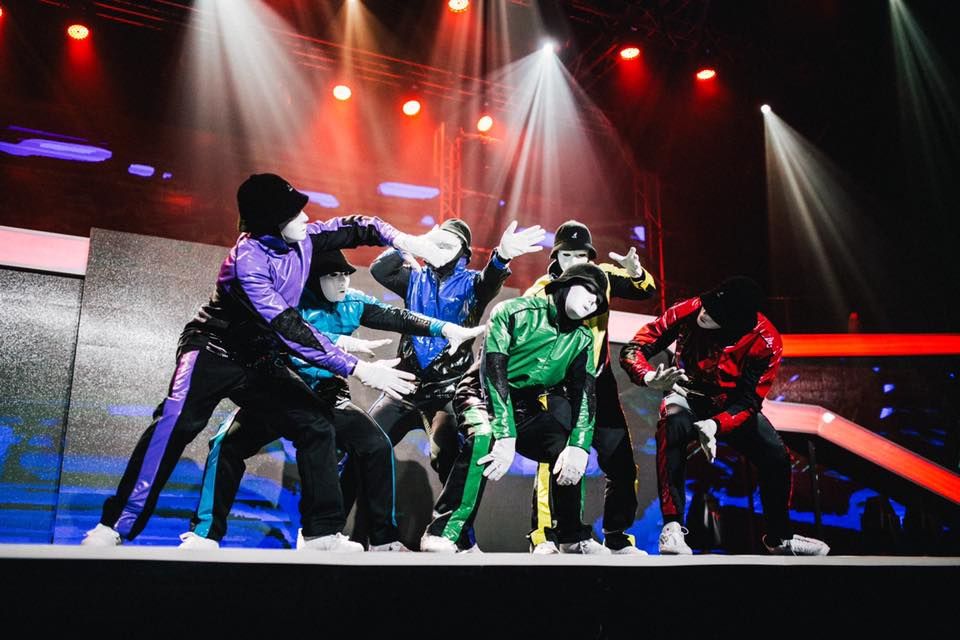 Voted “Best Family Show” and “Best Show for All Ages” three years in a row, Jabbawockeez brings the world’s most influential hip-hop dance crew with their positive message of tolerance and equality to the MGM Grand.

A throwback to the pre-Cirque du Soleil days of the circus, the new Circus 1903 at the Paris Las Vegas features classic circus acts like jugglers, contortionists, high-flying wire acts, strong men, and even elephants! Except, these elephants are actually puppets. This show is appropriate for all ages, with no salacious adult humor and lots of audience interaction with the kids. 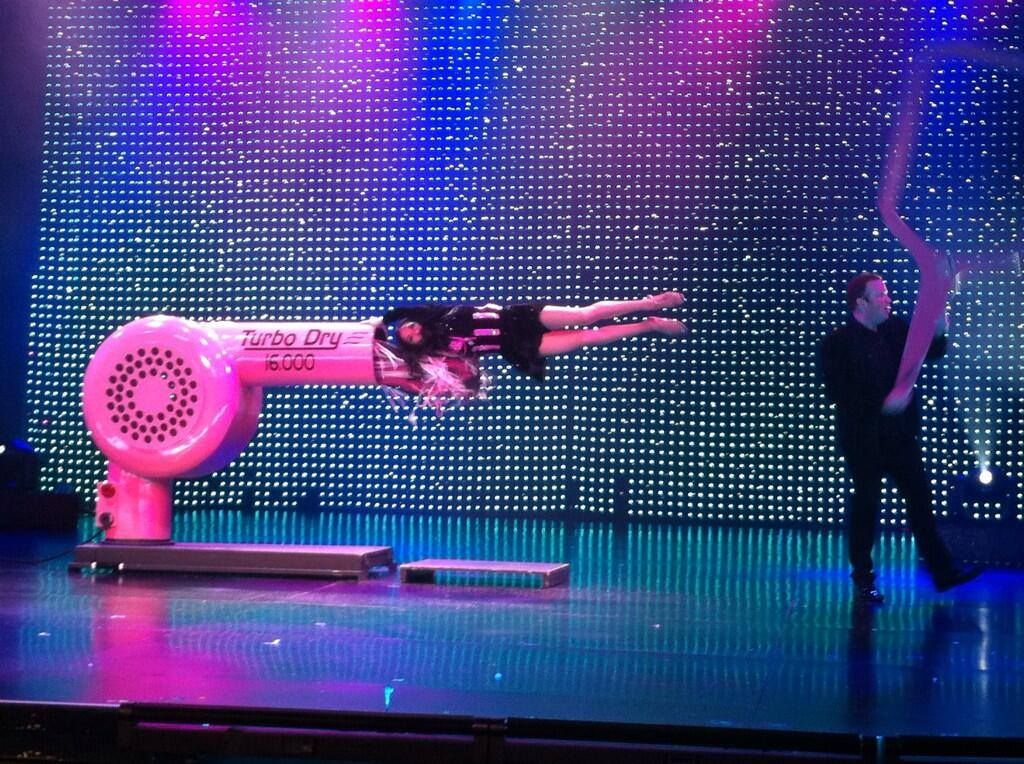 This all-ages magic and comedy show inside Planet Hollywood’s Miracle Mile Shops sees “Illusionist of the Year” Nathan Burton in his own high-energy show produced by him and his family. Not only is Burton widely acclaimed as a highly-entertaining and talented showman, but also tickets to this show are markedly cheaper than most other shows on the Strip. 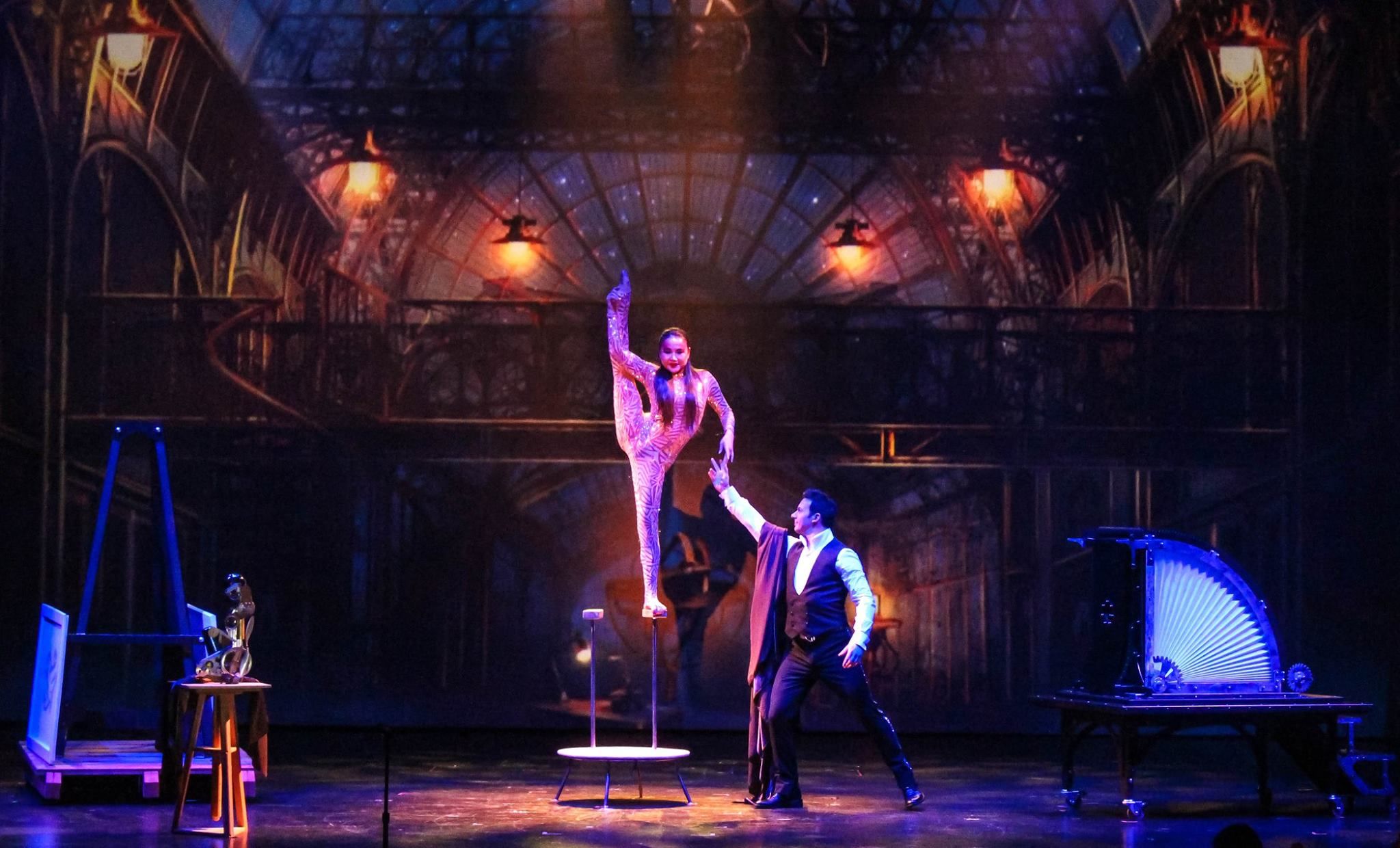 A new show at the Tropicana, award-winning illusionist David Goldrake’s IMAGINARIUM takes its spectators on a journey through a surreal place that lies somewhere between the real world and a world “full of dreams and fantasies.” Kids 12 and under are free with the purchase of one full-priced adult ticket. 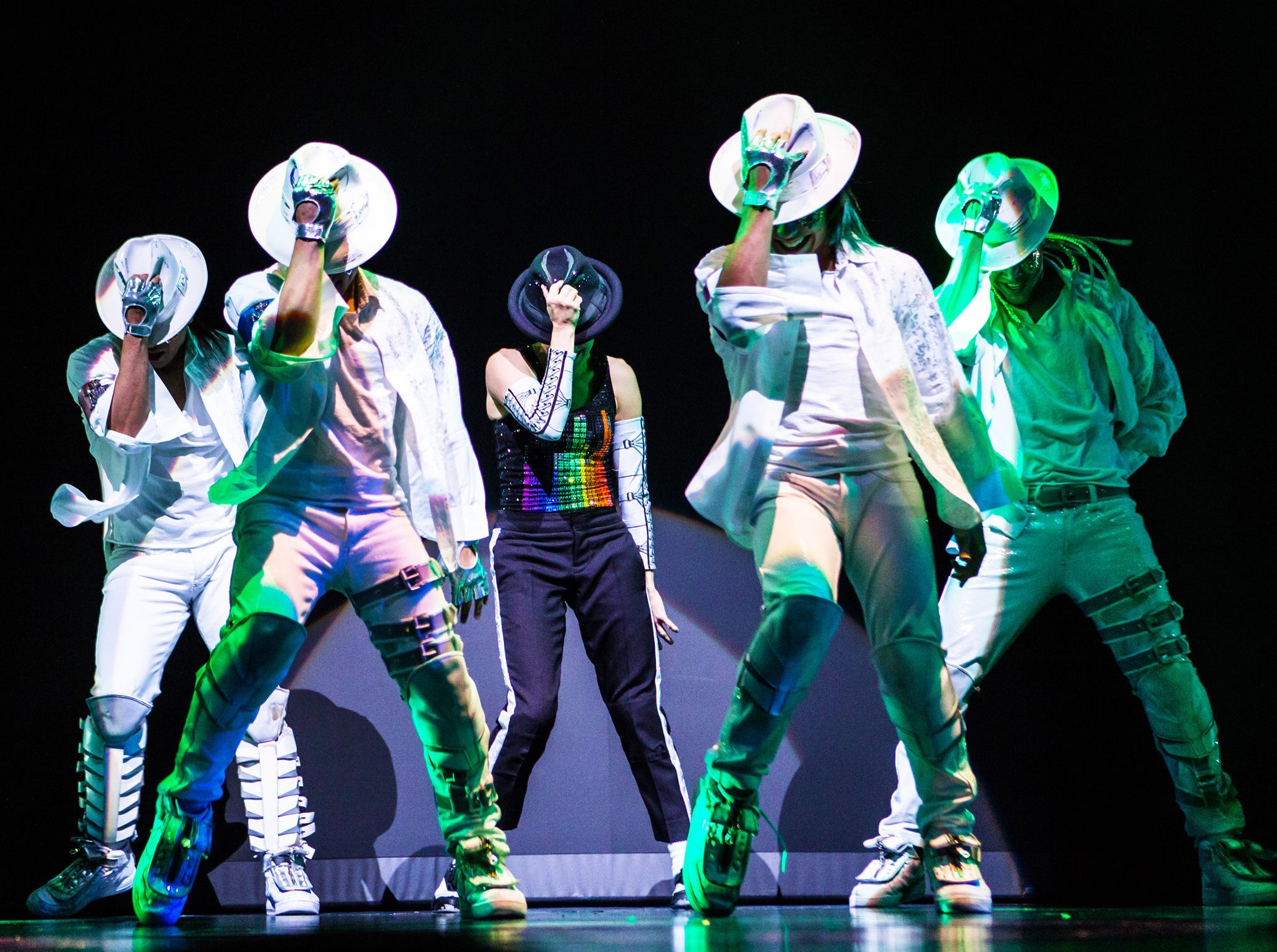 Take all of the “wow” moments of any Cirque du Soleil show and add in the music and dance moves of Michael Jackson, and you’ve got ONE, a jaw-dropping spectacle tribute to the King of Pop. 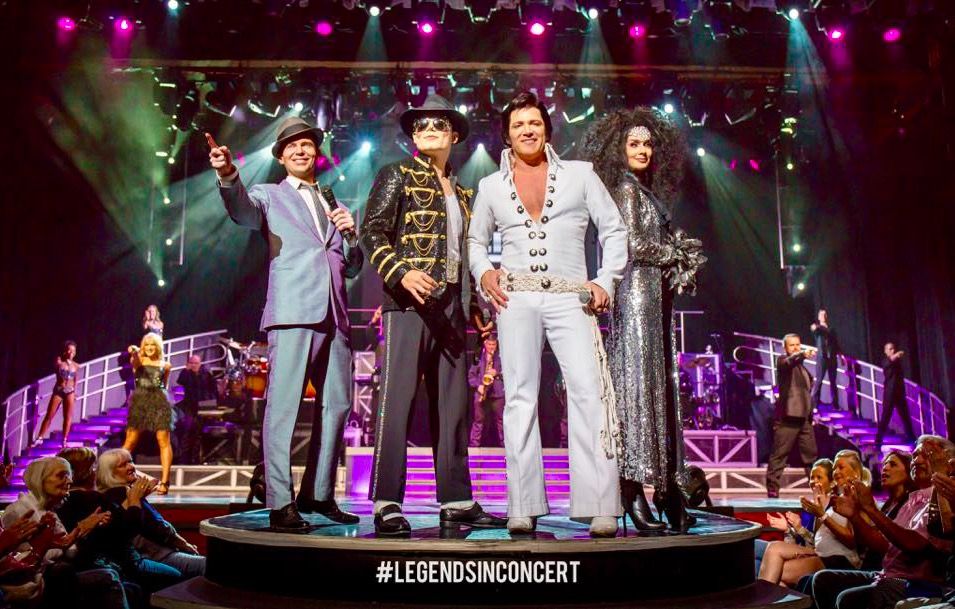 Legends in Concert is a live celebrity tribute show with a constantly-rotating cast of dead-on-accurate singing celebrity impersonators performing medleys of the stars’ biggest hits. This is now the longest-running show in Vegas and has spanned additional shows all throughout the country. Impersonators look and sound eerily close to the real thing, and range from Elvis (of course) to Lady Gaga to Michael Jackson to Shania Twain to Frank Sinatra. Check the website for the latest celebrity line-up and enjoy a mash-up mini-concert of some of your favorite superstars of past and present! 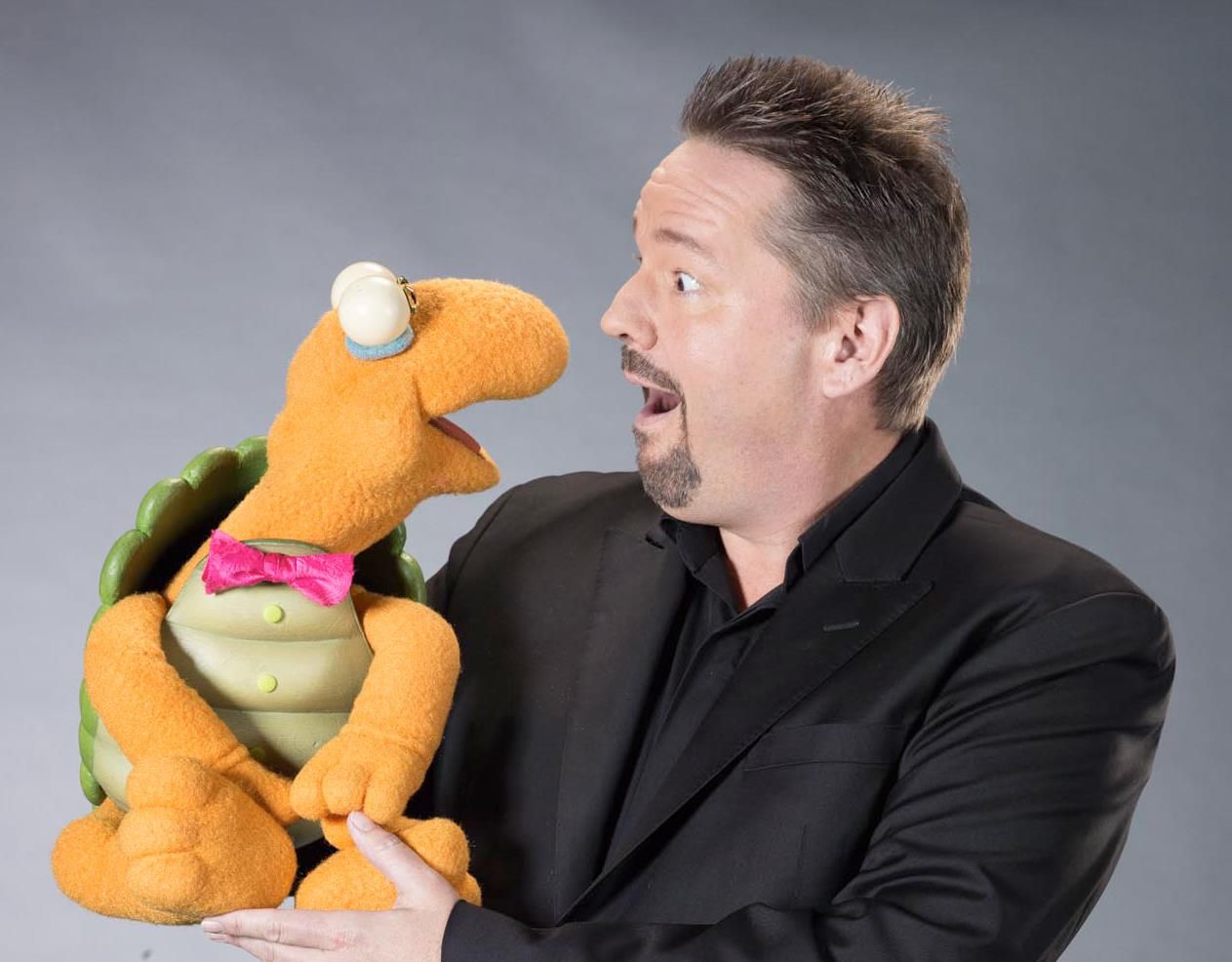 Singer, comedian, ventriloquist, and celebrity impressionist Terry Fator has been named “Best All Around Performer” with the “Best Show” in Vegas. His unique blend of singing, comedy, impersonations, and talking puppets is appropriate for almost all ages. Younger kids will enjoy the puppets while older kids will appreciate more of the humor, and there will even be a few jokes that only the adults will appreciate (kind of like a Disney movie). This is an all-around great show for the whole family.

Traveling to Las Vegas: Where to have the most fun with the kids
Tagged
Family Travel Trip Planning Las Vegas, NV, United States
What did you think of this story?
Meh
Good
Awesome