There was a moment in May when New York City suddenly sprang back to life. Vaccination rates were rising, the CDC reversed its outdoor mask advice, and the subways resumed 24-hour service. Neighbors saw each other smile for the first time in over a year. For some, indoor dining was suddenly an option that didn’t inspire anxiety. For me, nothing seemed to mark an end to NYC’s darkest days like the emergence of Ty Tea — a Sunday LGTBQ day party hosted by Ty Sunderland at 3 Dollar Bill, where queer people gathered for the sole purpose of having fun.

New York’s LGBTQ community never really stopped gathering in-person this past year: They rallied in the streets for Black lives, trans lives, and Asian lives. They celebrated the presidential election by banging pots and pans in parks and on sidewalks. Social bubbles met for drinks in plywood shacks constructed outside the gay bars that remained open. Illegal queer nightlife bubbled underground, too, popping up in Manhattan apartments, Brooklyn warehouses, and Fire Island beaches. An occasional picture from these secret soirees made the rounds on social media, causing people to throw up their emoji arms in dismay. GaysOverCovid, an Instagram account that started posting last July, outed gay partiers who shirked CDC guidelines and shamed them for their carelessness. Gathering for the majority of this past year usually came with a cost.

But as spring began to bloom, the fear and stigma surrounding these gatherings began to fade. GaysOverCovid made their last post on March 5, and by early May, 3 Dollar Bill was marketing Ty Tea. Within a few weeks, maskless merrymakers posted their latest party pics of LGTBQ day parties on Instagram with impunity. Shirtless boys in short shorts gyrated on a makeshift cement dance floor outside 3 Dollar Bill’s warehouse. “Nature is healed,” read one social media post about Ty Tea on May 23.

NYC’s LGBTQ nightlife was finally back, it seemed — but with a caveat: It was taking place during the day. Bars and restaurants were on city-mandated curfews until June. The late-night shenanigans of yore would have to wait.

The re-emergence of LGTBQ day parties 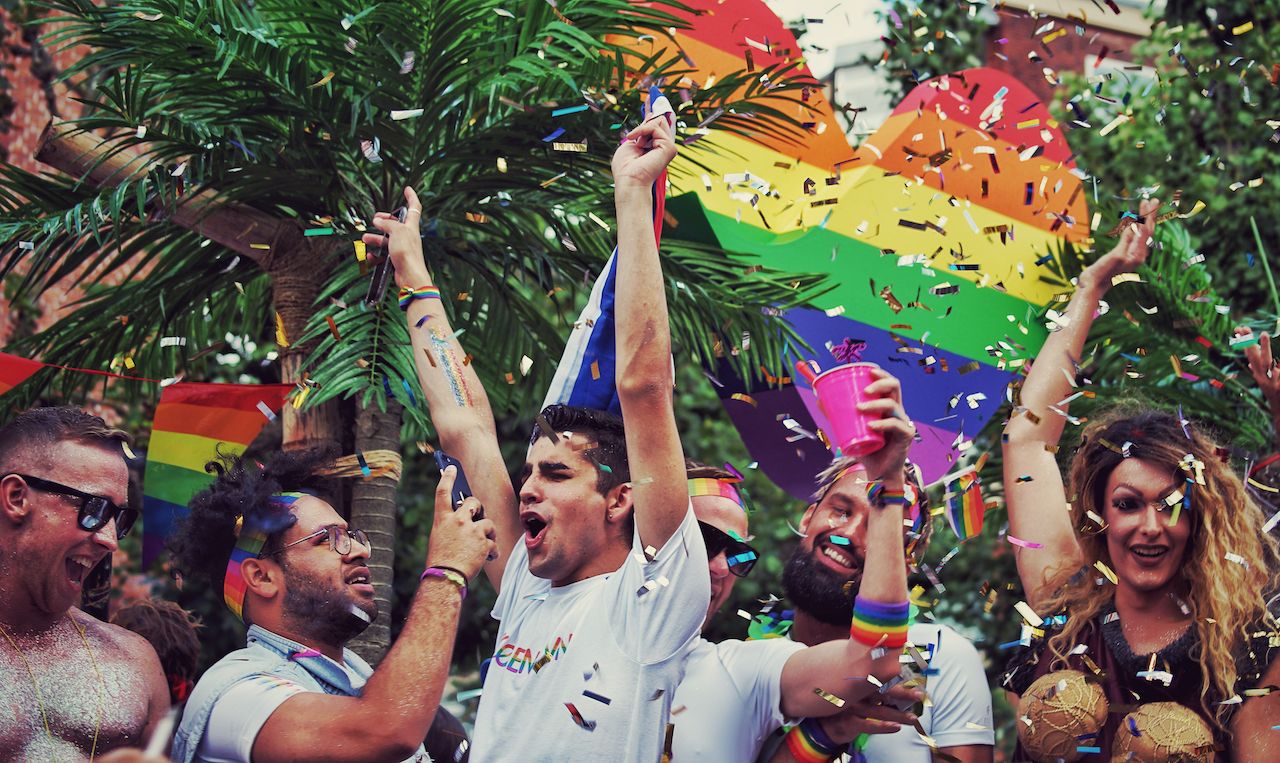 The Sunday funday at 3 Dollar Bill was like a singing canary in a coal mine; a signifier that throwing a queer day party wasn’t only possible, it was popular. When tickets for Pride Playground — Sunderland’s Pride version of Ty Tea — went on sale in early June, they sold out in less than a minute. Pre-sale tickets for his weekly event sell out nearly as fast.

Now, LGTBQ day parties seem to be blooming all over the city.

Papi Juice — an art collective behind inclusive pop-up parties celebrating queer and trans people of color — returned to the dance floor on June 6 for the first time in 15 months. The inaugural party, hosted outside at Astor Place, began at noon. Attendees twirled under a blazing sun until nightfall. On June 13, the group threw another early-evening event outside the Brooklyn Museum to celebrate Brooklyn Pride. The party ended a mere hour and a half after sunset.

Second Sundays, a free monthly Central Park meet-up frequented by gay men, resumed its daytime gatherings on June 13 after a one-year hiatus. The group, which began in 2015, transforms Sheep Meadow into a queer picnic replete with speedo-clad guys who gab on the green. At the most recent event, someone doled out rainbow-colored jello shots as guys flitted about in summer kaftans. Although rain eventually chased most of the crowd away, a group of die-hard New Yorkers stuck around, soaking in their newfound freedom to assemble.

Other familiar queer afternoon parties have also returned to the scene, including Fly Sundays at Monarch (a rooftop party in Herald Square), Paradisco at Le Bain (another rooftop party at the Standard Hotel), and Mister Sunday (an uber-inclusive, queer-friendly hang in Sunset Park, Brooklyn).

Even drag queens are braving the light of day to have a good time. The Mobile Drag Performance Unit (MDPU) — a 12-foot trailer converted into a stage — will be making the rounds in Brooklyn through June 26 to offer New Yorkers free lunchtime performances featuring some of NYC’s best drag artists.

Still, Ty Tea remains the most well-hyped of these offerings, much thanks to its namesake, Ty Sunderland. He’s the Sunday pastor at 3 Dollar Bill, bringing together a choir of queer voices who sing and dance like they’re attending gay church. Special performances by pop artists, like Slayyyter and VINCINT (whose new bop “Higher” is a top contender for the song of the summer) mix with dreamy disco and house music. Sunderland so expertly manipulates the crowd with his blend of sweet nostalgia and cutting-edge modernity that it’s easy to lose yourself in his musical sermon. The only reminder of life pre-vaccine is a wall scrawled with “Keep your fuckin’ mask on!”

A brief history of tea dances

Although Ty Tea feels groundbreaking in 2021, tea dances are old hat in New York City. According to LGBT historian Will Kohler, the tea dance is a tradition dating back to the late 1800s, when socialites in the United States and Europe would gather for tea and snacks in the afternoon (“low tea”) or later on for a full meal (“high tea”). These gatherings remained popular until World War I, saw a resurgence in the 1920s, and eventually fell out of vogue during the Great Depression.

In the late 1960s, tea dances resurfaced in Cherry Grove — a queer summer enclave on Fire Island — to create safe spaces where gay men could meet without worrying about potential police raids. Selling alcohol to known homosexuals was illegal at the time, as was kissing or dancing with a member of the same sex. Serving tea was a clever way to circumvent the law.

In a Vice article , Joanne Spataro credits Michael Fesco, who ran a Cherry Grove bar called the Ice Palace, for throwing the first gay-centric midday shindig. By 1967, tea dances became a daily activity during Fire Island’s busy season. Within a few years, the afternoon fête caught on in nearby NYC and eventually in gayborhoods across the country.

Although many tea dances morphed into nighttime events in the following decades, they never vanished from view. The Monster, a Greenwich Village gay bar with roots in Cherry Grove, hosts one of NYC’s longest-running tea dances, and the tradition remains a pillar of social life in gaycation destinations like Fire Island and Provincetown.

Today’s newest iterations of the tea dance — including Ty Tea and the recent Papi Juice events — invoke the spirit behind Cherry Grove’s 1960s shindigs by capitalizing on the queer community’s desire to gather while navigating COVID-era restrictions. They simultaneously harken back to a historical era while ushering in the dawn of the post-pandemic dance party. Most importantly, they provide safe, joyful spaces where people can celebrate after surviving a tumultuous year.

The joy of LGTBQ day parties

There’s no doubt New York nightlife will return to its vampiric hours of operation in due time. Governor Andrew Cuomo announced in early June that New York State would “get back to normal” once 70 percent of adults received at least one dose of the COVID-19 vaccine. On June 14, Cuomo released a statement that 69.9 percent of people in the state were vaccinated. The city that doesn’t sleep is primed for a summer of insomnia, and queer event producers from Lady Fag to Susan Bartsch are ready to give them what they want.

But as New York inevitably picks up its old habits, let’s not forget to praise the current day-party craze.

After a year in quarantine, dancing in daylight is a radical act, like a second coming out of the closet. Everything about it is open. There’s no cloaking yourself in the mystery of night or hiding out in pixelated Zoom squares. Day parties are for putting down your phone, for being seen, and for socializing freely. You don’t have to get lucky to get some Vitamin D at an event like Ty Tea. You don’t have to stay up late to enjoy the crowds at Second Sundays. You can party hard at an afternoon function and still wake up well rested for work.

Perhaps, just as the city has recently embraced pandemic-era changes like additional bike lanes, outdoor restaurant spaces, and pedestrian-friendly streets, queer New Yorkers will continue to embrace day parties in the months ahead. Perhaps events like Ty Tea will become ubiquitous, and summer weekends will be filled with people dancing together under the sun.

LGBTQ TravelWhat Is the Future of LGBTQ Safe Spaces?
Tagged
LGBTQ Travel Music + Nightlife
What did you think of this story?
Meh
Good
Awesome