Although Colombia has been making great strides in tourism over the last few years, many people don’t realize that it is now one of the hottest LGBTQ destinations in South America. As a result of recent legislation introduced by the government, LGBTQ rights are equal to those of Argentina, Brazil, and Uruguay. Consequently, Colombia has become a tempting choice for queer travelers.

Within the last 10 years, a full set of anti-discrimination laws have been established. Domestic partnership and adoption rights have been put into place, and same-sex marriage has been legal since 2016. Due to these changes, as well as elevated visibility and a generally more accepting attitude, Colombia is currently attracting a large number of LGBTQ visitors.

Of course, Catholicism runs deep in the veins of the country, and in many ways, Colombia remains staunchly conservative. LGBTQ travelers should still take caution, especially outside the major cities, but attitudes are changing fast and thankfully for the better.

There may be a long way to go on a national level, but these days the cities of Bogota, Cartagena, and Medellín are exciting and safe destinations for LGBTQ travelers. Each of the cities has a thriving queer scene with a wide range of bars, clubs, and even neighborhoods of their own. Colombia has never looked so good for LGBTQ globetrotters. Here, we take a look at the country’s top LGBTQ destinations. 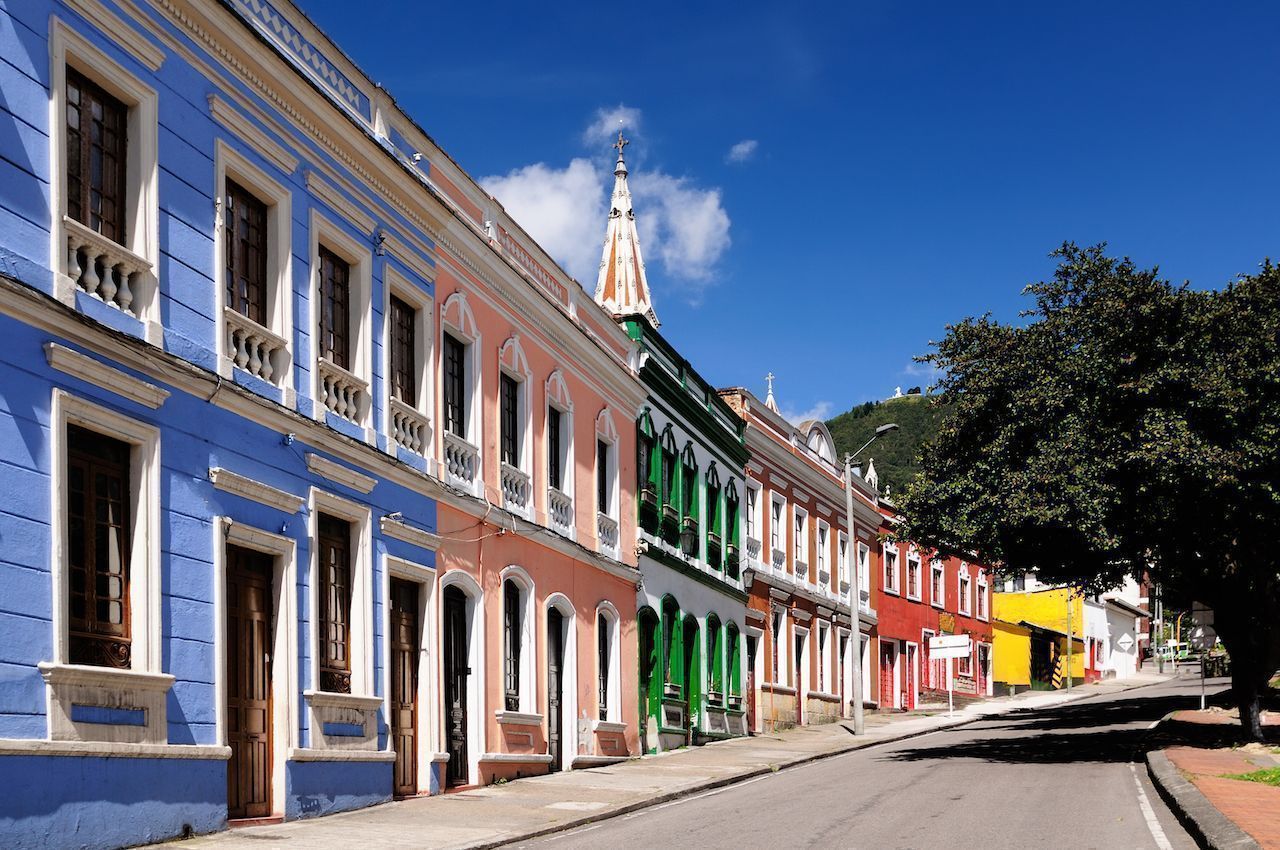 Bogota is the country’s capital and is located on the eastern side of the Andes. It’s a dynamic metropolis brimming with magnificent architecture, world-class museums, and energetic nightlife. The city is home to South America’s largest gay club, Theatron, as well as an abundance of other clubs, bars, and cafes.

To confirm its impressive LGBTQ credentials, Bogota has the unique distinction of having the first openly lesbian mayor in Latin America. Claudia Lopez married her partner, Senator Angelica Lozano, in December 2019 and took office in January 2020. This is progress indeed for a country where the position of mayor is considered the second-most important political position after president, and machismo is still dominant in many areas of society.

With much still to be achieved, Orgullo Gay, Bogota’s Pride, continues to be a protest for LGBTQ equality, but it’s one heck of a party too. Pride was first held in 1982, and at that time, a mere 32 people hit the streets. In 2019, there were 200,000 loud and proud participants. A parade takes place in June annually, culminating with a free festival at Simon Bolivar Park. Revelry ensues throughout the city and into the early hours at the scores of bars and clubs.

Chapinero is the main LGBTQ hub, and its streets are awash with hip cafes, cool bars, and colorful characters. Although the historical area of La Candelaria competes as a favorite spot for visitors to stay in, Chapinero is a perfect option for those planning to make the best of the city’s queer nightlife. Zona Rosa, an upscale neighborhood located in the north of the city, also attracts the rainbow crowd. The area has an assortment of venues, including El Recreo de Adan, an LGBTQ friendly bar where you can recline on bean bags while sipping cocktails. 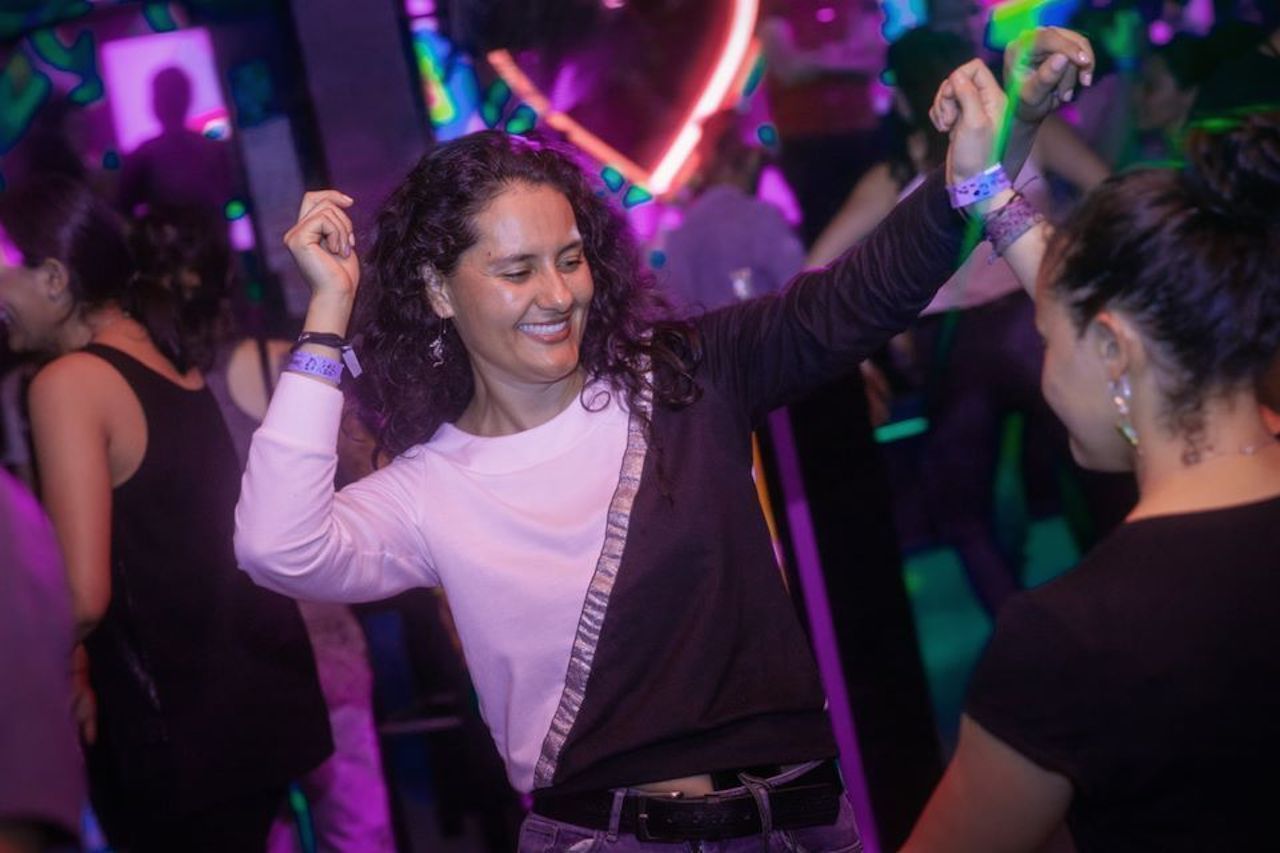 The majority of clubs and bars in Chapinero are located on Carrera 9 between Calles 58 and 60. There are around one hundred LGBTQ venues from mellow coffee shops to glitzy clubs. This area is also where Theatron, a mega nightclub with a capacity of 4,000 can be found. A converted movie theater, it has been established since 2002 and is spread across five levels and 14 rooms. Each of the rooms has a different theme, and music ranges from techno to salsa. Although the crowd at Theatron is primarily male, one of the rooms is set aside exclusively for women, providing one of the best nights out in the city for lesbians. A large roof terrace offers a breath of fresh air when things get too hot on the dance floor. The entrance fee includes unlimited drinks, and with bars scattered throughout the club, the next cocktail is never far away.

Being the hedonistic city that it is, Bogota is known for its “love hotels” where guests pay by the hour rather than the night. A number of them are located on the same street as Theatron — perfect for those who get lucky but don’t have anywhere to go.
Kitschy Disco Jaguar, located on Carrera 7 in the heart of Chapinero, is another club that takes its partying seriously. Decked out with chandeliers and neon, cocktails flow and patrons can take their pick from two dance floors. To spice things up further, the club even has its own sex shop.

A visit to the cute and cozy Village Cafe on the next street along at Carrera 8 is akin to entering a fantasyland. The cafe-bar has oodles of character enhanced by glitter balls and a myriad of funky artifacts all illuminated in pink. It’s a friendly LGBTQ hangout and a great place for a quiet drink or two.

Despite their comparative demise in Western countries, saunas and bathhouses are still popular amongst gay men in Bogota. Dark Club is one of the most notorious of them, where pretty much anything goes. For those who prefer something a little less hardcore, the well-maintained Complices Spa has a huge Roman pool along with a steam room, jacuzzi, and bar — an ideal way to spend a rainy afternoon in Bogota. 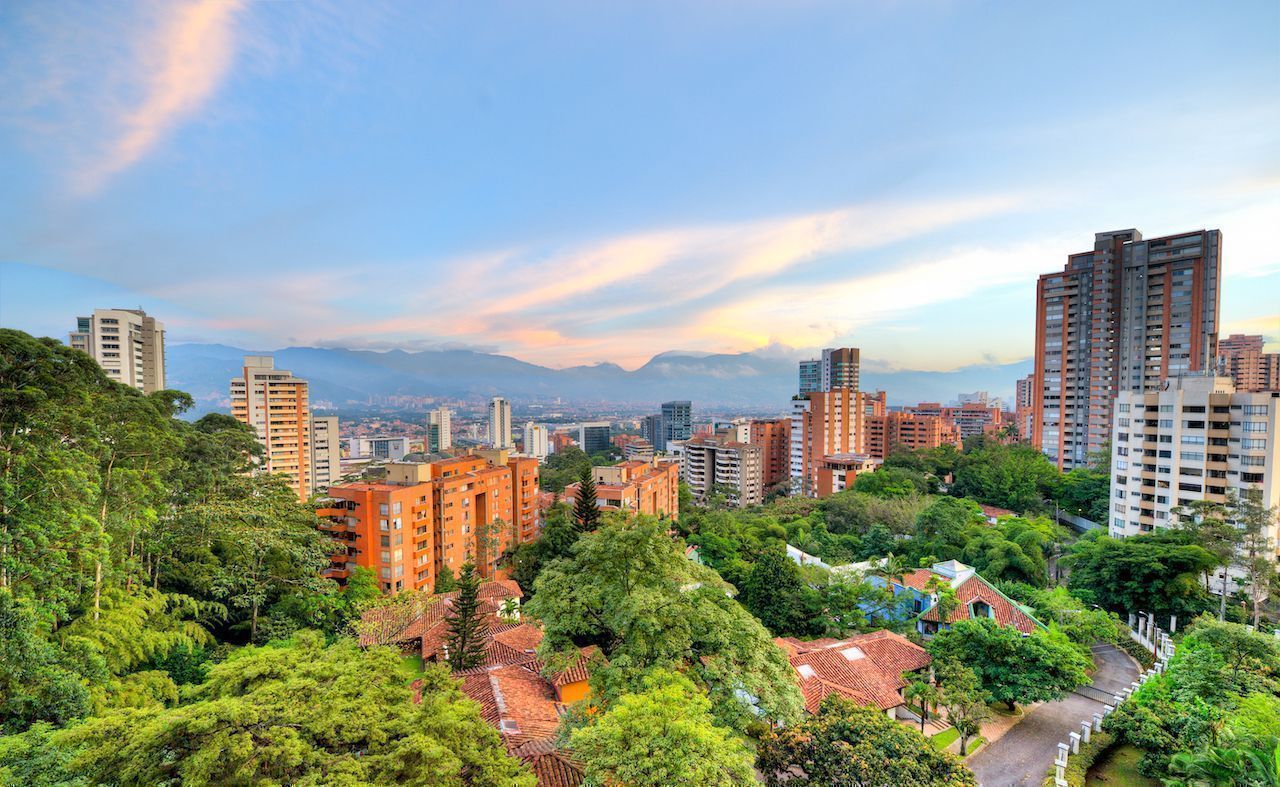 Once controlled by Pablo Escobar and one of the most dangerous cities in the world, Colombia’s second-largest city has undergone a radical transformation. It is now a thriving metropolis and home to innovative museums, cutting-edge restaurants, and a scintillating LGBTQ scene. Medellín is proud of its progressive attitude and has embraced both local members of the LGBTQ community and queer visitors.

Pride is held in June and is an inclusive celebration where everyone gets involved whatever their sexuality and identity. It’s an overwhelmingly positive example of how the general population shows support to the LGBTQ community, and it’s an intoxicating time to be in the city. The people of Medellín have a reputation for friendliness and hospitality, which is never more obvious than during Pride.

Although LGBTQ hangouts can be found throughout the city, El Poblado is where the majority of rainbow flags flutter. The area brims with lively cafes and bars, with new venues joining their ranks all the time. El Centro is the downtown area where the city’s parks, museums, and tourist attractions can be found. Other neighborhoods worth a stroll are tree-lined Laureles and Estadio, both quieter residential areas. Belen is one of the oldest neighborhoods of the city, and although it is more traditional, it has plenty to offer in the way of nightlife and is fast becoming one of Bogota’s coolest areas. 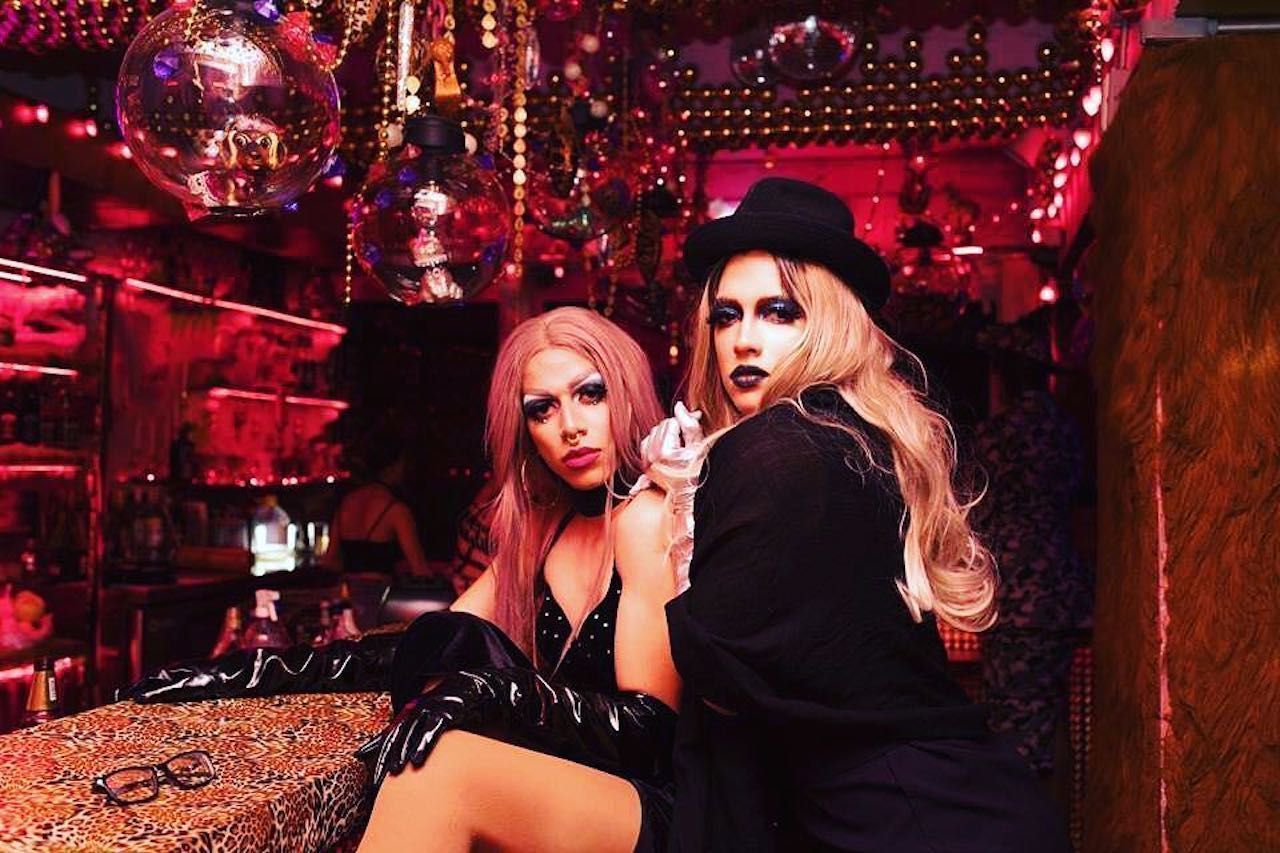 To get the fiesta started, check out Mexican-style La Cantina de Javi, an iconic gay bar located in El Centro where the drinks are cheap and the salsa music loud. Back in El Poblado, another cool pre-club bar is Vintrash which has a ‘60s-70s vibe. The walls are adorned with Warhol pop art and retro memorabilia. The music is pleasingly eclectic, covering everything from electro to folk. It’s not exclusively gay, but very inclusive — everyone is welcome regardless of sexuality or gender.

Another Poblado favorite is Bar Chiquita, a cocktail bar that takes kitsch to a new level. It’s a feast for the eyes, from its giant flamingos to the plethora of weird and wonderful art that can be found in every nook and cranny.

Donde Aquellos, also in Poblado, is a stylish bar situated next to Park Lleras. It has a cruisey undercurrent, and on busy nights, hot guys from all over the planet spill out onto the sidewalk. An outside seating area is a great spot for people-watching.

To round the night off, Viva Discotek is one of the city’s most popular hotspots and is located in Laureles, a short taxi ride from Poblado. Known for its beautiful clientele and hunky podium dancers, it’s one of the city’s largest clubs and has a capacity of 1,000. Reggaeton, Latino, and electro music ensure that the dance floors are always busy. 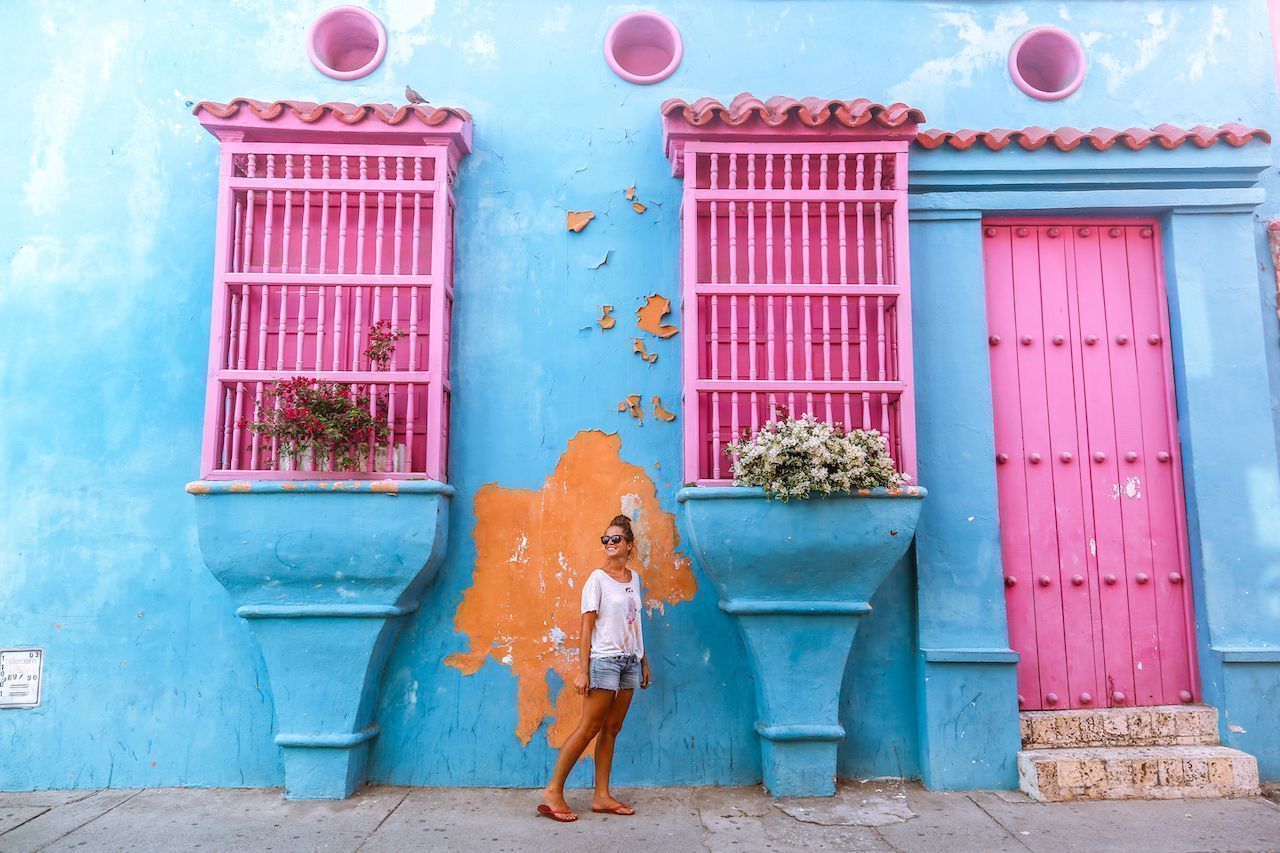 A UNESCO World Heritage site, Cartagena is situated on Colombia’s Caribbean coast. With its cobblestone streets, colorful colonial buildings, and white-sand beaches, it’s quite a spectacle and is consequently the country’s premier tourist destination. Although the LGBTQ scene isn’t as expansive as those in Medellín and Bogota, it’s nevertheless an appealing spot for LGBTQ visitors. In August 2019 Cartagena held its first (official) Pride, which was supported by the local authorities and included parades, a boat party, and a drag race.

Centro is the most picturesque of Cartagena’s neighborhoods and an obvious magnet for tourists. Colonial architecture and attractive cobbled streets are surrounded by old city walls, and there’s no shortage of restaurants and shops. The neighborhood of Getsemani is a little on the edgy side but is fast transforming itself into the city’s hippest area, attracting the cool kids with some inspiring street art, trendy cafes, and an alternative ambiance. In contrast, the shoreline of the nearby neighborhood of Bocagrande is Cartegena’s version of Miami or Panama City — a beachfront lined by high-rise hotels and designer stores. 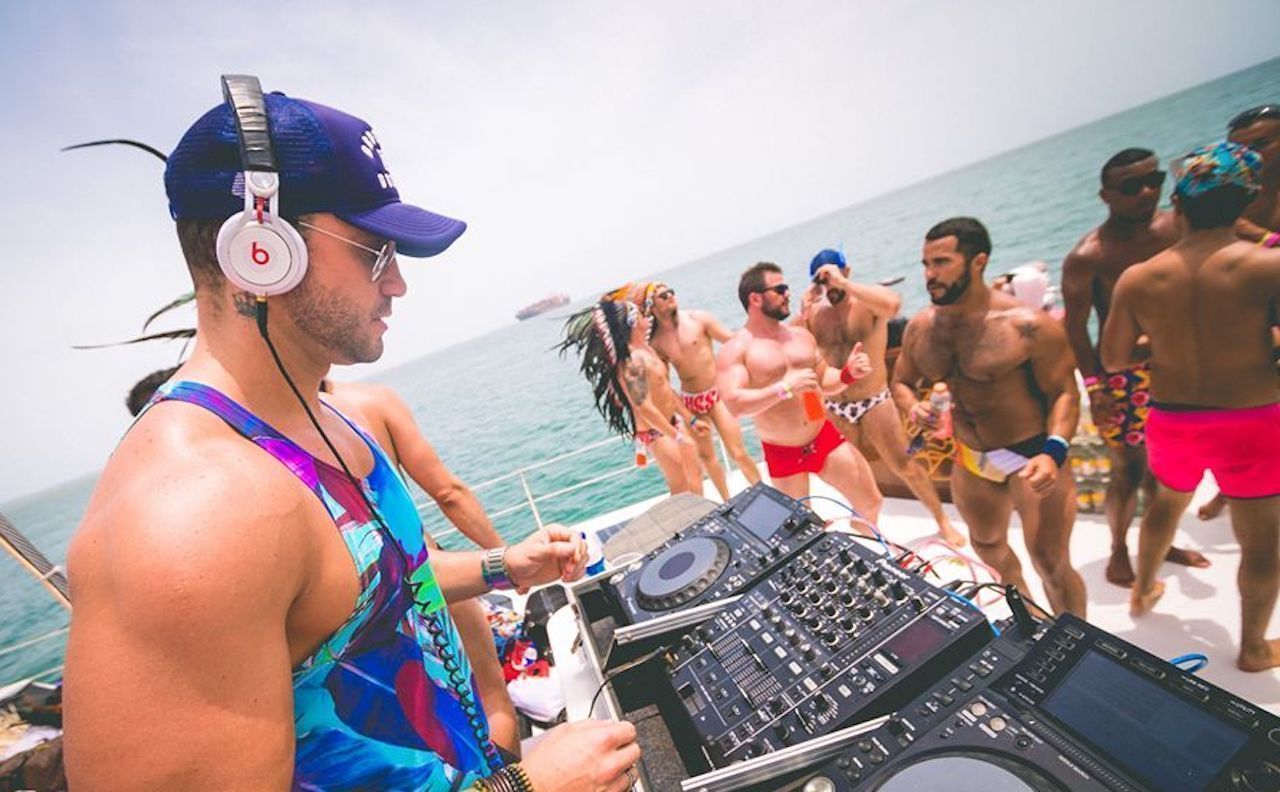 Unlike Medellín and Bogota, which have specifically LGBTQ neighborhoods, venues in Cartagena can be found throughout the city. Cartagena has a very international vibe, and many of the bars and clubs are gay-friendly despite not being exclusively LGBTQ. Le Petit is one of the few gay venues, a restaurant by day and club at night. After the sun sinks over the Caribbean, both locals and tourists hit the dance floor to the likes of Maluma and Shakira. D8 is another choice spot to dance the night away and has a rooftop terrace on which to chill. Although male-orientated, these establishments are also welcoming to women.

Beyond the nightlife, Hollywood Beach in El Laguito is a popular spot with the LGBTQ crowd, especially on Sundays. It’s an ideal place to enjoy some Caribbean beach life, meet the locals, and watch the sun go down.

LGBTQ TravelThe best LGBTQ museums and archives around the world
Tagged
LGBTQ Travel Trip Planning Colombia
What did you think of this story?
Meh
Good
Awesome

10 of the best adult-only all inclusive resorts in the Americas
10 sexual practices from around the globe that remind us the world is a big, beautiful place
Every type of Japanese sex club and what you’ll find inside
Orgasm workshops are a thing, and these are the best ones to try
The 6 best intimacy and sexual retreats for couples around the world

How to learn salsa in Cali, Colombia, the Salsa Capital of the World

Feel the rhythm: How to tap into the true spirit of Colombia

Colombia might just be the best place in the world for birdwatching. Here’s why.

Cartagena’s upscale scene is on the rise, but it still has a wild side

The 7 most fabulous vacation destinations for LGBTQ travelers in 2022