I made it about 75 feet from my hotel before someone offered me cocaine.

“Italian food, fresh Italian food,” a bald man yelled at me from a storefront along Calle Larga. “You hungry? See the menu.” He pushed the menu in my face in case I was confused what Italian food was.

“I’m good,” I said politely as I tried to hurry past.

“You want coke?” he asked, like this was the obvious follow-up question to turning down questionable steak pizzaiola. “I got the good shit man, 97%. Puro!”

“Good on that too,” I said walking away.

“Best price you’re gonna find,” he yelled after me. “Half what you pay in America.”

In my first hour in Cartagena, I’d found cocaine before I could find bottled water. 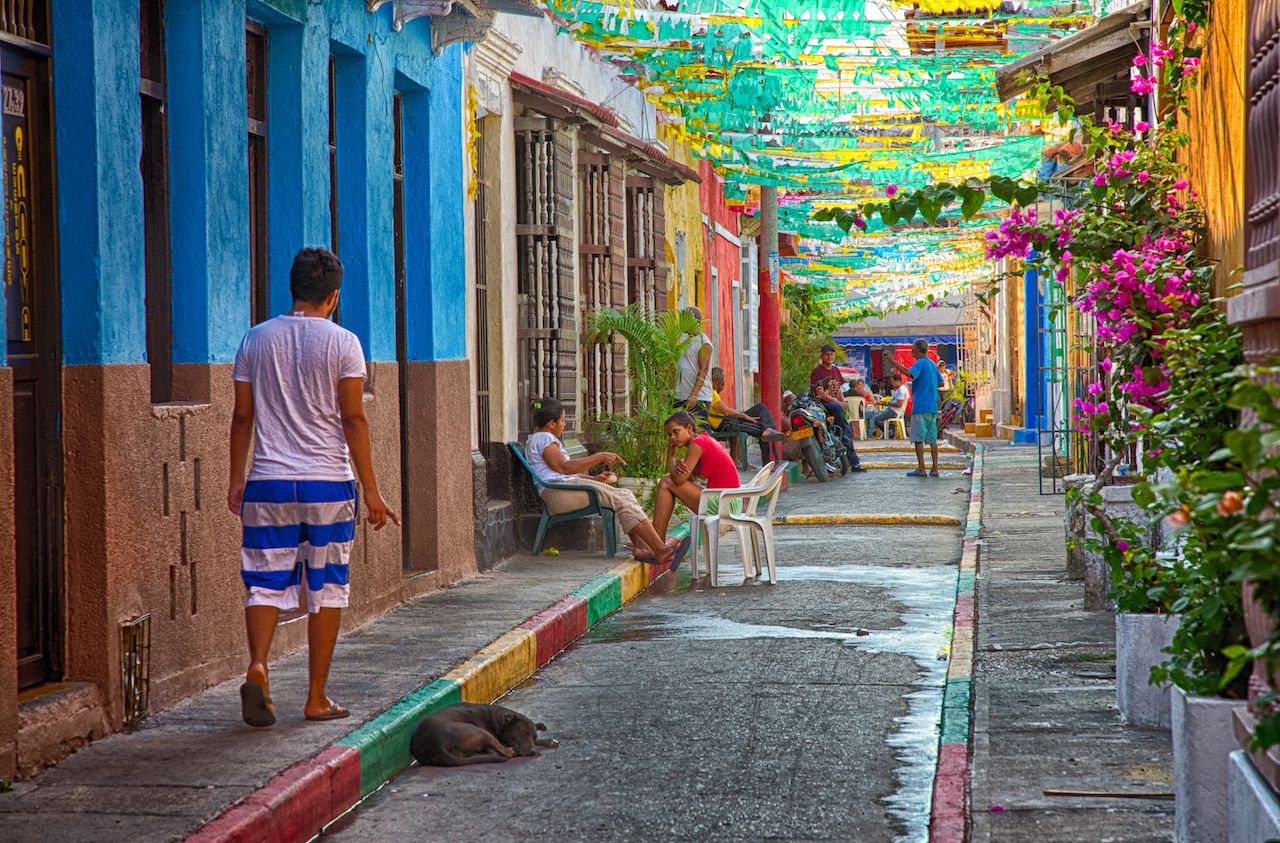 My hotel was not in a bad neighborhood, either. Or even what we might euphemistically call “transitional.” I was at the Selina — a sort of high-end youth hostel/boutique hotel hybrid — settled in the Getsemani district just outside the old city. It’s a neighborhood full of street murals and small local restaurants where people who look like young locals fill the plazas and pizza joints on weekends. It’s the perfect place for a hotel like Selina with its rooftop yoga, kale smoothies, and multi-level coworking space. But still, apparently, very much the Cartagena everyone back in Miami had told me about.

For folks who live in South Florida, Cartagena is both closer and cheaper than Las Vegas, the weekend getaway of choice for a little “what happens here, stays here” action. My image of the place had been formed not by 1990s news reports but by stories like my friend who linked up with a bachelor party and found herself at a villa filled with tables of cocaine and naked prostitutes.

“I definitely made some very bad decisions in Cartagena,” she told me.

A different friend usually couldn’t leave his house for two or three days after Cartagena weekends.

It was Sin City, without the rules, at half the price.

For someone who’d never been to this colonial gem on the Caribbean coastline, it’s a confusing narrative. Travel publications paint it as a historic Latin American paradise, like Havana if anyone had bothered painting it since the ‘60s. A direct contrast to the uninhibited shitshow I’d heard about.

So I spent nearly a week in Cartagena figuring out which one was closer to the truth — and found Cartagena somehow manages to be both. It’s a place full of world-class cocktail bars and fine dining steakhouses, history and beach clubs and funky little arts districts. It’s cleaned up, yes. But it only takes 75 feet to know it’s still a place to do things you’ll never speak of back home.

A historic old city becomes one of the world’s best places. 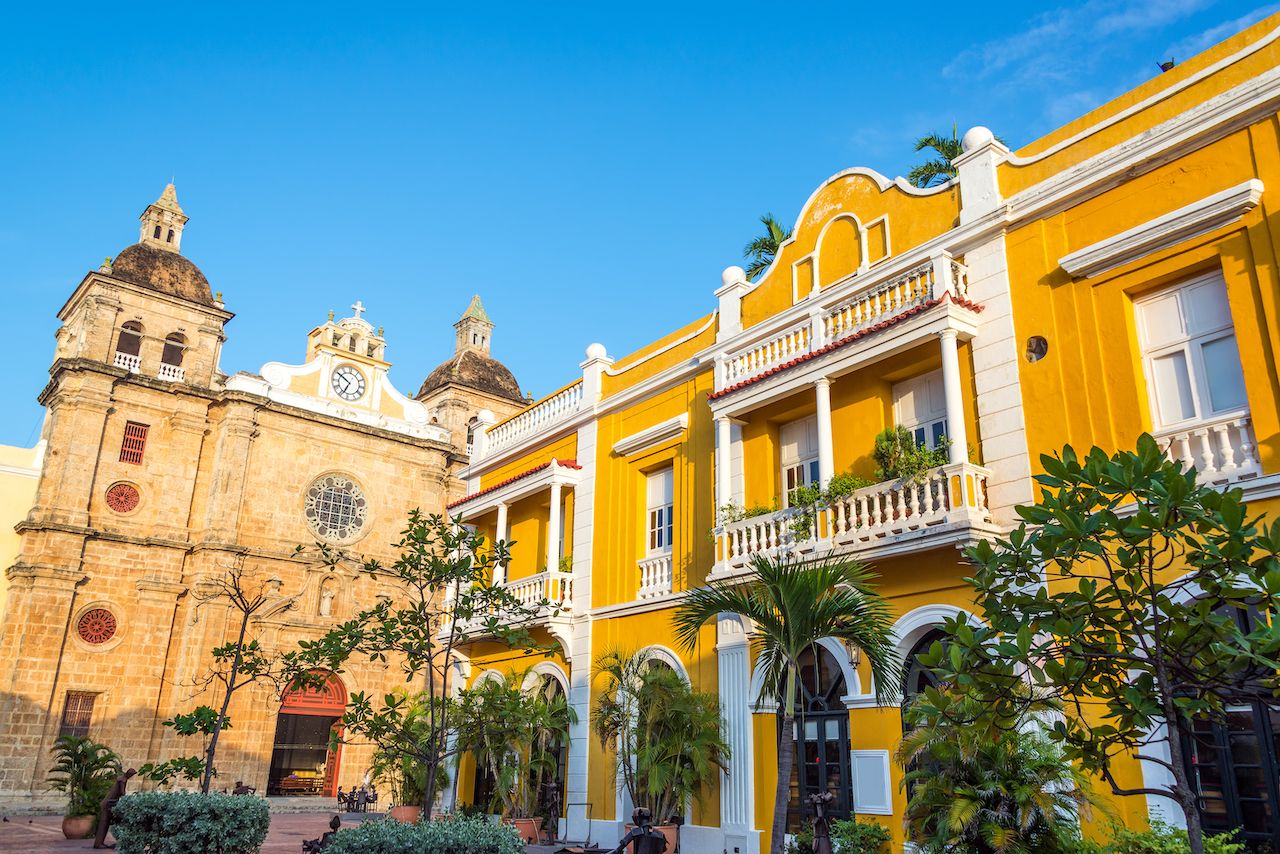 If you’re not up on the history of Spanish colonialism, Cartagena de las Indias was settled by Spain in 1533, named to differentiate it from the Spanish city of the same name. The natives who fled during Spanish conquests left behind vast amounts of gold, which tempted pirates sailing in the area. After French Pirate Robert Baal successfully raided Cartagena, and Francis Drake followed with another invasion, Spain ordered protective walls built around the city. Between about 1600 and 1796, seven miles of walls were built around the city. Most remain standing.

Today, instead of guarding against pirates, the walls are a place to enjoy the Caribbean sunset with a cold drink. Café del Mar is tourists’ preferred walltop bar, where you can sip a glass of rosé with views of the sparkling new Boca Grande skyline. El Baluarte San Francisco Javier, about 300 yards down the walls, is equally lovely with smaller crowds and live music.

Inside the walls of the old city, you’ll find the grandest example of Spanish colonial architecture in the Caribbean, where colorful buildings line narrow streets filled with grand homes and elaborate door knockers. The streets have a palpable, compacted energy that’s forced together over the slender cobblestone streets, reverberates off the stone walls, and explodes from the rooftops in the form of cocktail bars. 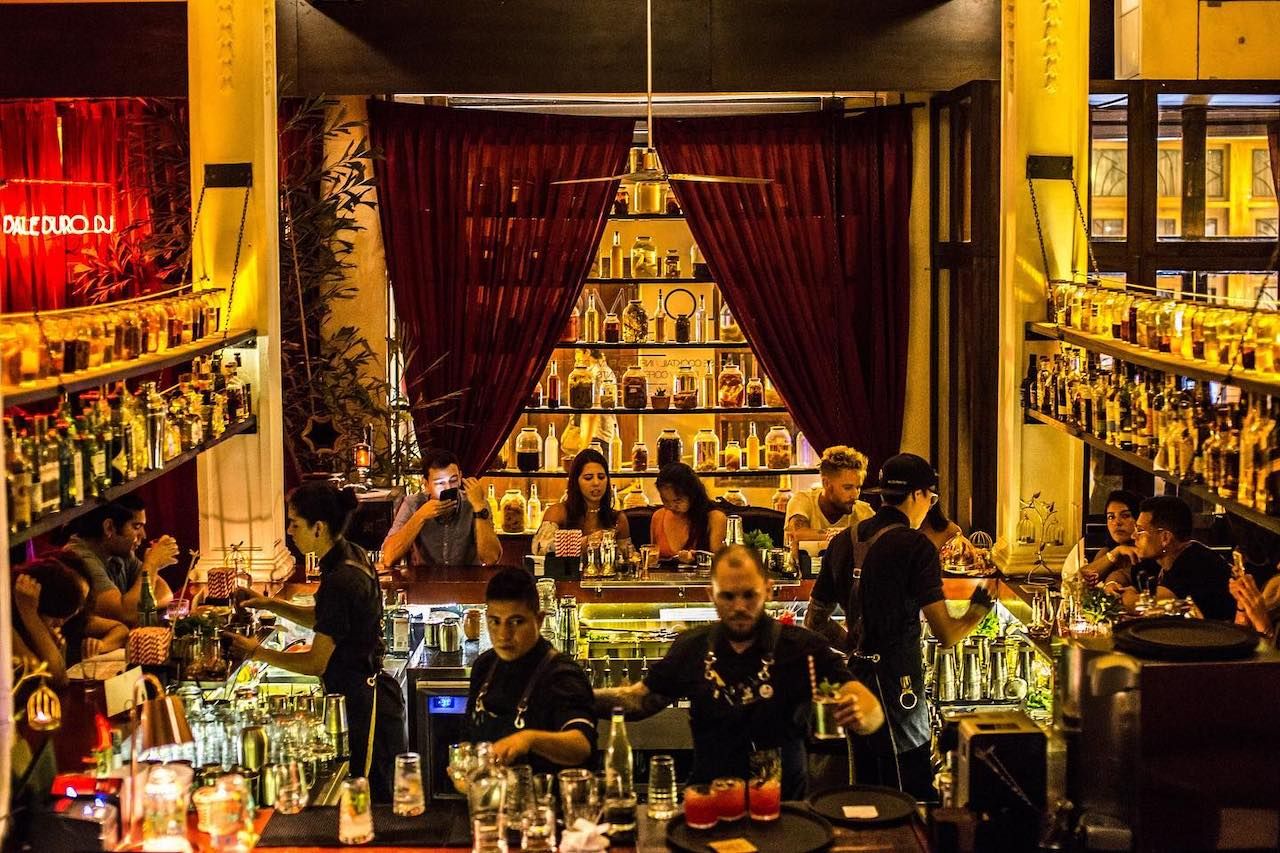 Chief among them is Alquimico, a multi-level, chemistry-themed alcohol palace where you can sip on Painkillers in a pineapple or try original drinks named after different Colombian cities. Across the street on another rooftop, you’ll find live music on multiple levels at La Jugada Club House, where drinks are also expertly crafted. There’s also El Arsenal: The Rum Box and El Baron, two ground-level cocktail bars with drinks on par with anything in New York. And you can dance salsa until sunrise at Café Havana.

If those spots are too upscale, drinking cheap in the old city is even easier. Hawkers with coolers will happily sell you cold cans of Aguila, the Colombian equivalent of PBR minus the hipster baggage, for $1. The old city might also have the highest concentration of souvenir refrigerator magnets of any place in the world. And in between cracking your beers and helping you find the perfect souvenir for your Aunt Cindy, many hawkers might also try and sell you cocaine.

All this is wrapped around centuries-old history, the likes of which are hard to find without crossing an ocean. Cartagena is home to some of the Americas’ most impressive cathedrals, like the iconic St. Catherine of Alexandria, the old city’s most noticeable landmark, or the Iglesia de San Pedro Claver, also in the old city. Cartagena was also home to a tribunal for the Spanish Inquisition, whose former home is now the city’s history museum. Overlooking it all on a hilltop you’ll find the Castillo San Felipe de Barajas, a castle dating back to the 1500s. Above that on Cartagena’s highest point is the Convento de la Popa, a mountaintop monastery that’s been restored to its seventh-century glory.

Cartagena mixes the clean with the not-so-clean, and it works. 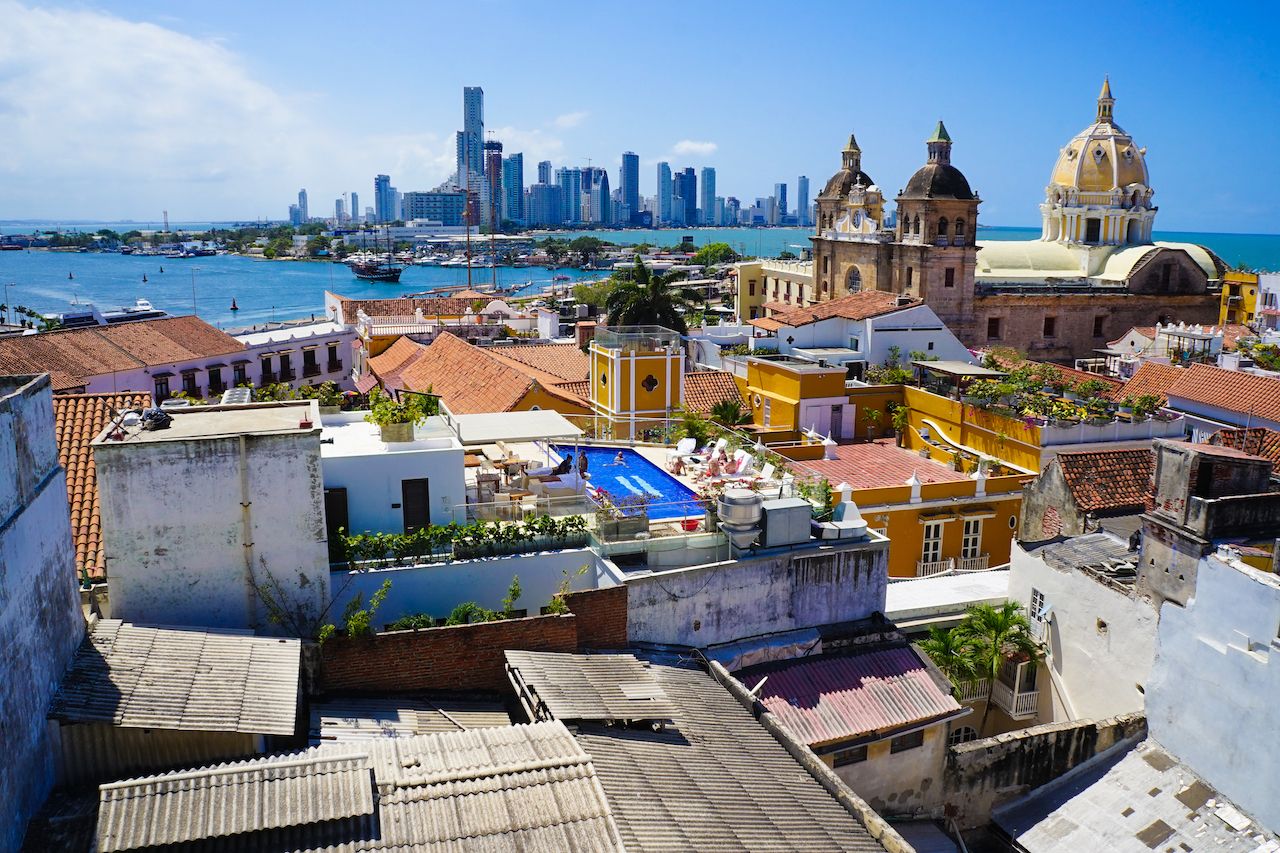 “What we really need is to cut down on the drugs and the prostitutes,” Selina’s General Manager Alejandro Salamanca tells me over dinner at Alma. The restaurant is an example of the city’s spectacular forays into fine dining, where a menu of fresh ceviches, beef carpaccio, and marmalade oxtail are served under giant wooden ceiling beams. It gives the feeling one might have had eating in the grand dining room at the Castillo San Felipe up the hill.

“Prostitution’s legal,” he continues while slicing into a sesame-crusted tuna steak, “but it’s not what we want people coming for.”

He reflects a point many people I spoke to about tourism in Cartagena made: The city knows it has an anything-goes reputation but hope people love it for other things.

After an elaborate, two-hour meal we head back out towards the main gates of the Old City into a plaza that smells a little like raw sewage.

“This is where all the prostitutes work,” my tour guide says as matter-of-factly as if she were telling me this was the best place to get bagels. The plaza is filled with bustling tourists and young women lounging in tight-fitting outfits. They make kissy faces at me and my friend.

“What’s that smell?” I ask the guide. She points to a narrow strip of concrete running down the street.

“That’s the sewers,” she says. “They had open sewers here, but they covered them up. But they still use them to this day.”

A street-level sewer seemed an odd place for a sex worker to set up shop; perhaps it was strategic, at the main entrance to the old city. Perhaps it was because people not looking for their services probably wouldn’t linger there long. 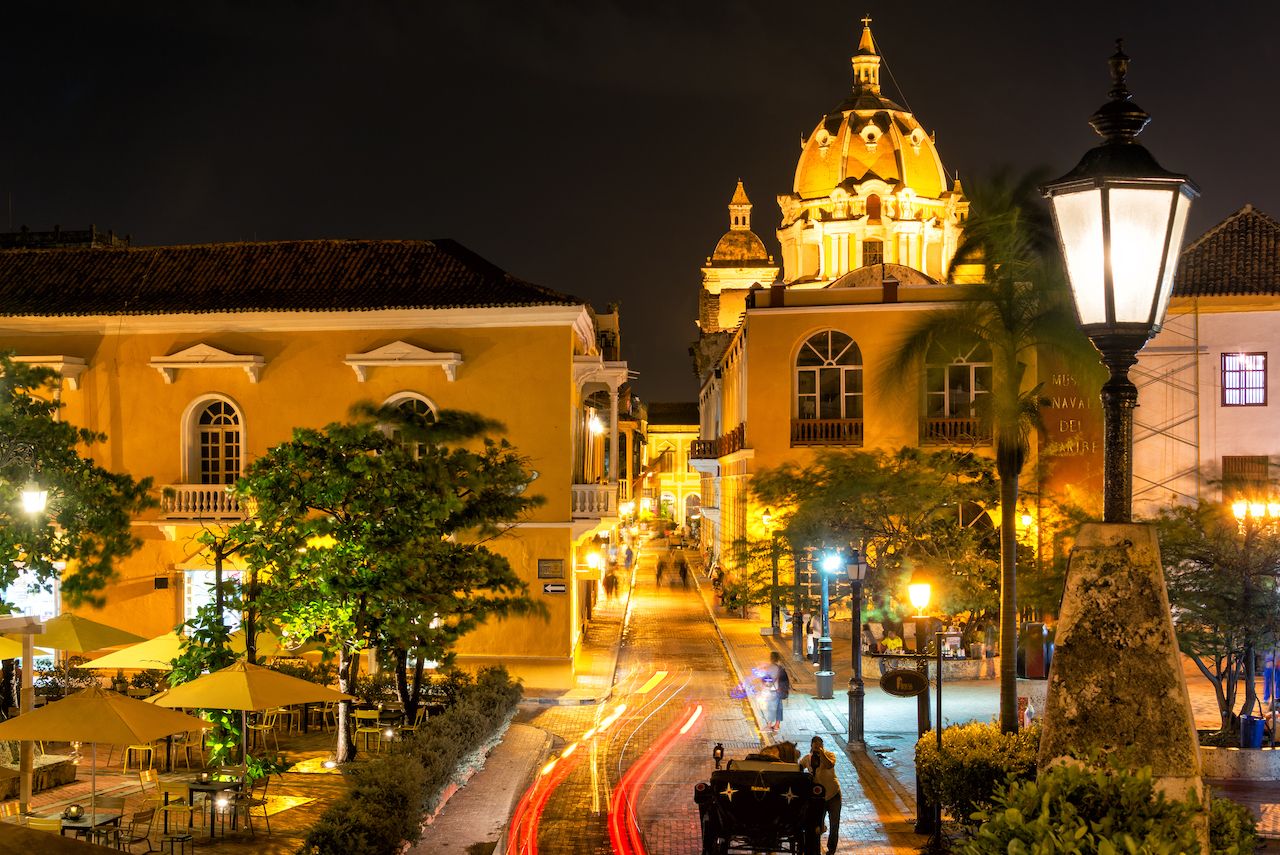 But the plaza didn’t really seem to attract any kind of “element.” Sure, there were the standard older guys there looking for a vacation “distraction.” But they were interspersed with people selling ice cream, bottled water, and magnets, families coming back from dinner and cruise ship passengers on their way to grand cocktail bars. The vices of Cartagena seemed like just another thing for tourists to partake in. The city somehow is balancing clean and seedy on the same street corner without anyone batting a synthetic eyelash.

In a week in Cartagena, I didn’t find much more trouble than I would at home, though it was definitely there if I’d wanted it. As a destination, there’s plenty of relatively clean fun to be had; Cartagena’s a bonafide tourism economy now, which means you’ll find all the great food, bars, and only-in-this-city attractions you can safely put on Instagram.

But if you so desire, also plenty of stuff reserved for Snapchat.

How To: Sail the Darien Gap