London’s restaurant scene can be overwhelming. There’s every type of food imaginable in the capital city, and tens of thousands of restaurants and pubs to eat and drink at. Traditional chip shops sit next to Jamaican restaurants and Indian spots serving classic English-Indian dishes. When it comes to fine dining and global restaurant recognition, there are nearly 70 Michelin-starred restaurants in London. Visitors are truly spoiled for choice when deciding where and what to eat. Narrow it down on your first trip to London by seeking out these essential dishes and drinks.

1. English breakfast, or fry up 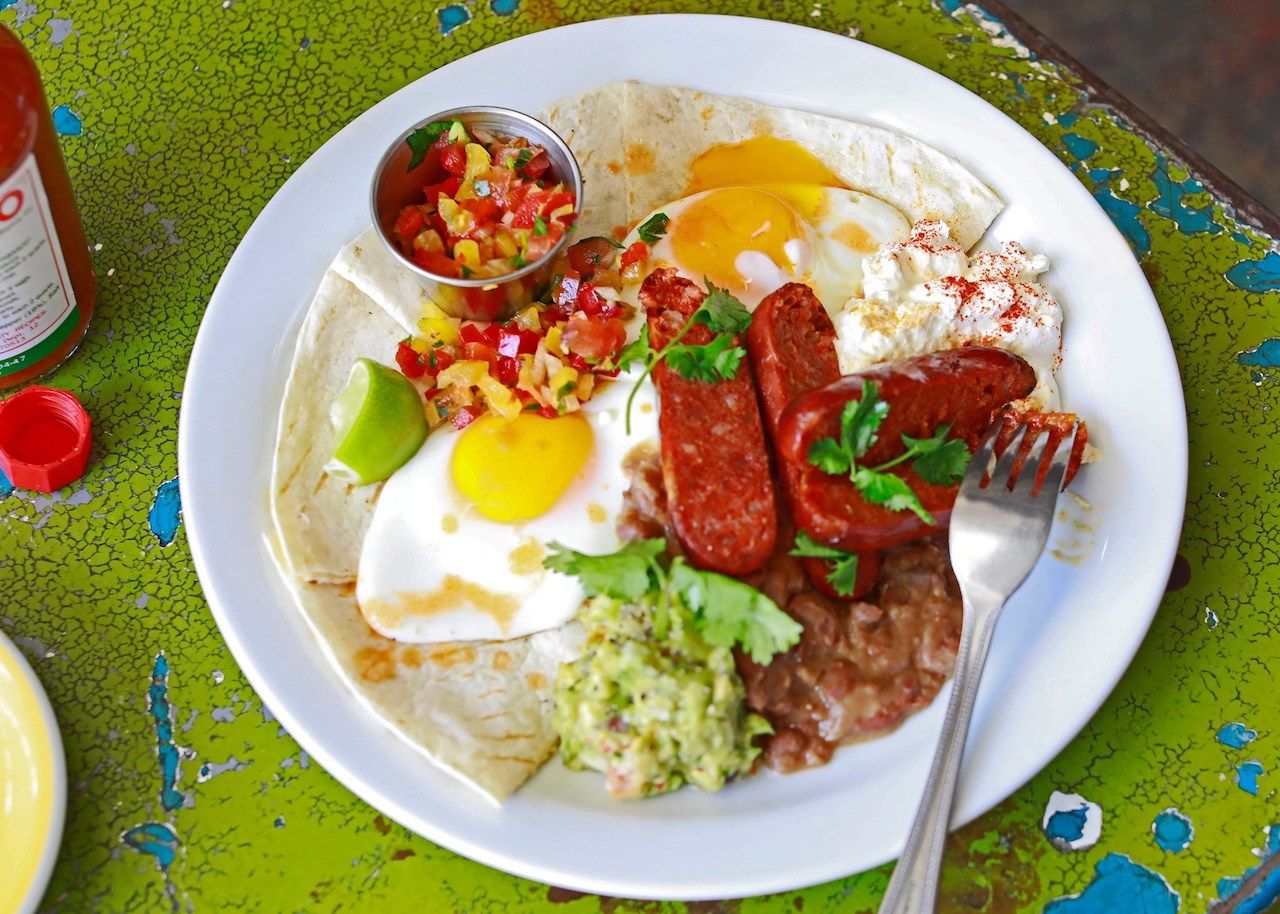 Start your day as the Brits do with a traditional English breakfast (which is also called a fry up). On this side of the pond, the most important meal of the day consists of sausages, bacon, eggs, tomatoes, mushrooms, toast, and, the most crucial element, beans. While the meal is indulgent and often a bit perplexing to foreigners, it’s delicious and essential to try. The fried toast (yes, fried!), roasted tomatoes, multiple kinds of sausages (sometimes including black pudding, otherwise known as blood sausage), baked mushrooms, and beans may feel like an odd way to start your morning if you’re used to cereal or something light. But this hearty plate will keep you warm and full as you venture out to the damp streets of London. The English breakfast is easy to find in the British capital, with variations available at most hotels, pubs, and breakfast restaurants. Some of the best places to start your day are at the Breakfast Club and the Regency Cafe, or if you find yourself out late, the Polo Bar serves breakfast 24 hours a day. 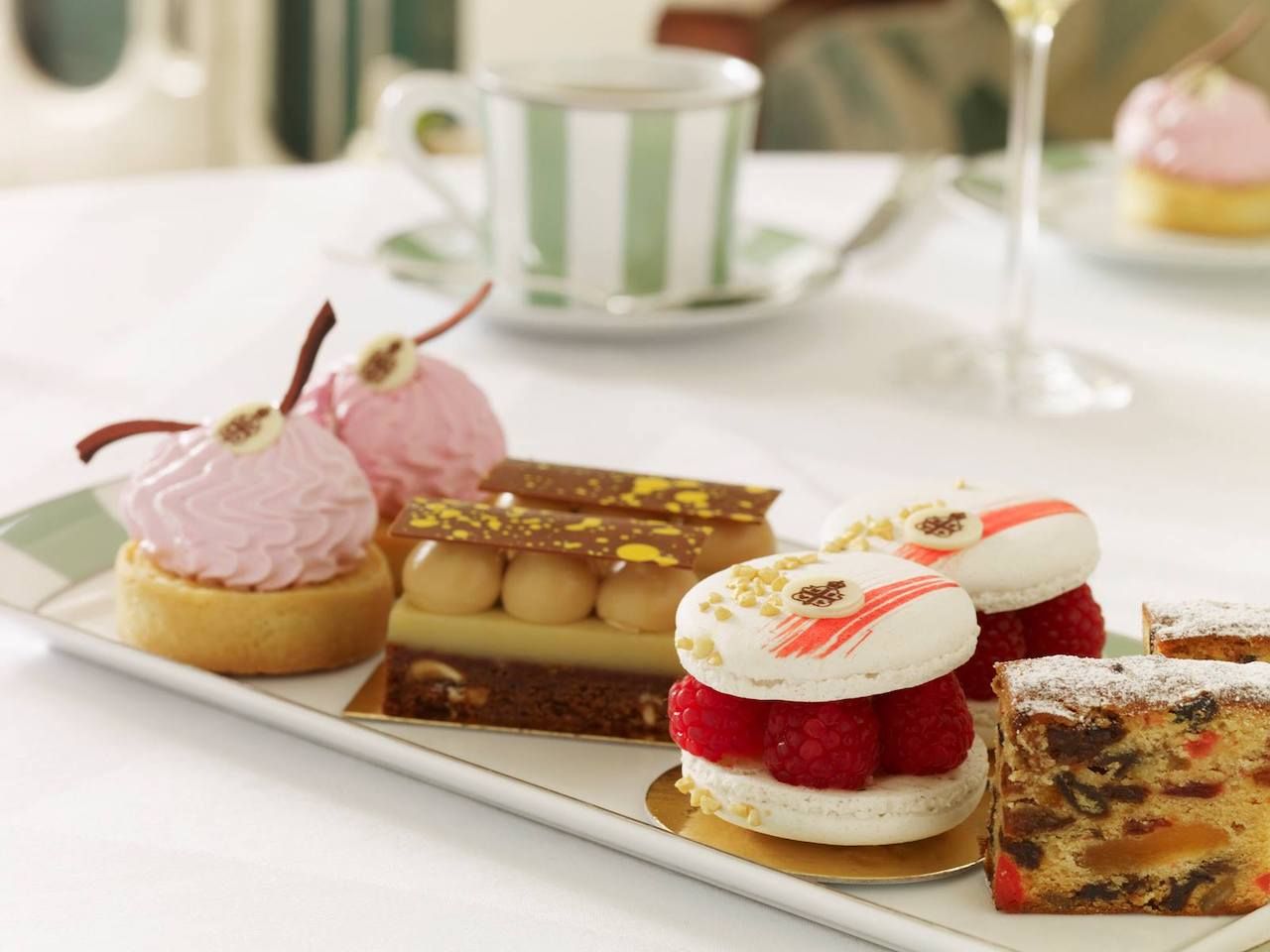 Afternoon tea is a quintessentially British experience and an enjoyable way to spend a few hours in London. It’s also called high tea, and has been a tradition for centuries dating back to the afternoon meal workers ate in the 1800s. It’s still popular among Brits today. Most hotels in London offer a high tea that can range from simple to extravagant and from traditional to novel. Some are themed — think Alice in Wonderland and Charlie and the Chocolate Factory. Depending on where you choose to partake, your tea usually includes a range of sandwiches, pastries, and scones that will keep you full until dinner. There’s a high tea in London to suit every personality: Fashion lovers will enjoy the Dior-themed biscuits at the Berkeley, those wanting a traditional experience should treat themselves at Claridge’s, and the Orangery at Kensington Palace is perfect for those who want regal surroundings without the hefty price tag. 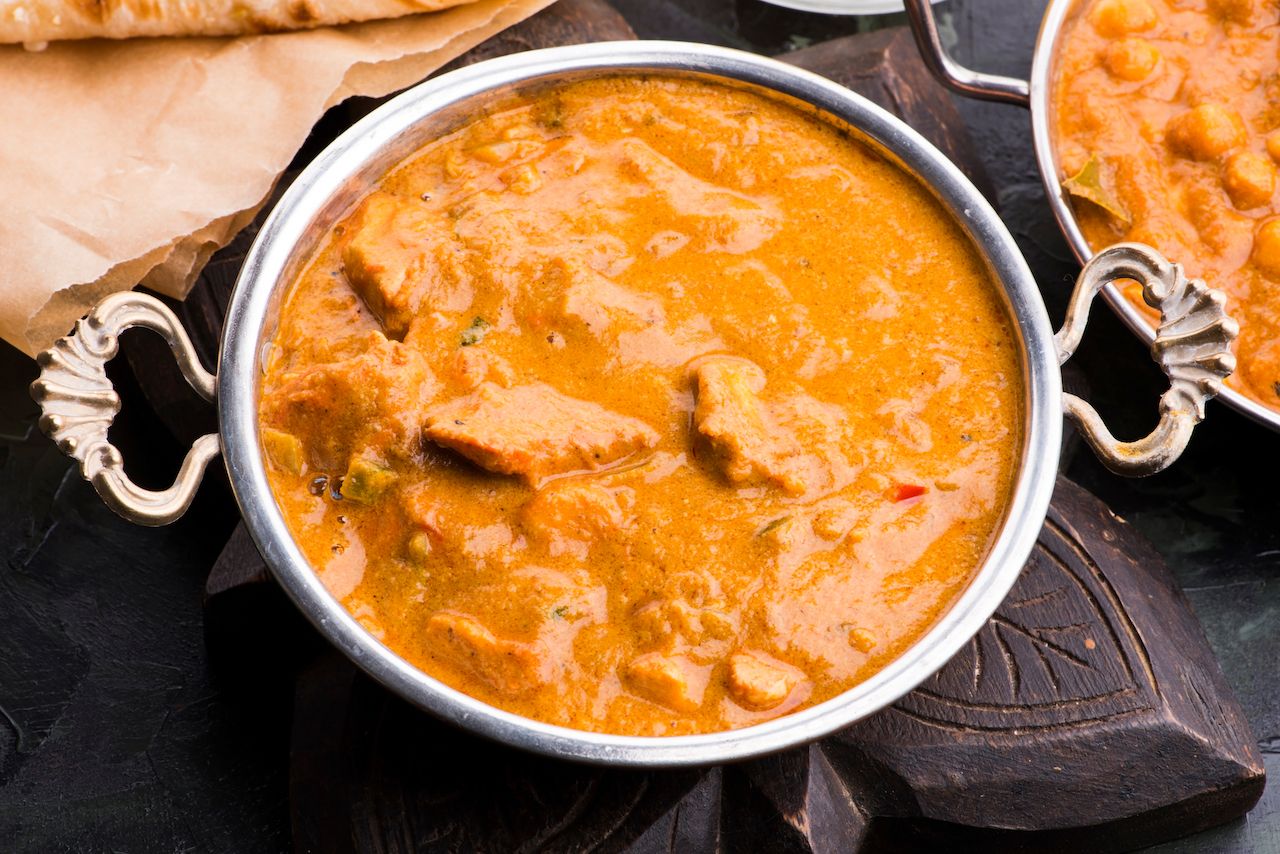 Chicken tikka masala is not typically thought of as British, but it is believed to have been invented in Glasgow. Today, London has some of the best chicken tikka masala in the world. It’s so popular that it’s considered one of the national dishes of the United Kingdom, and once you try the creamy tomato curry you will understand why. Served with rice, the chicken curry is easy to find in London and almost every Indian restaurant has it on the menu. While good Indian restaurants can be found all over London, it’s worth a trip to Brick Lane, which is famous for its row of curry houses, or head to Dishoom for a trendier atmosphere and a modern variation with sweet vinegar in the sauce instead of yogurt. 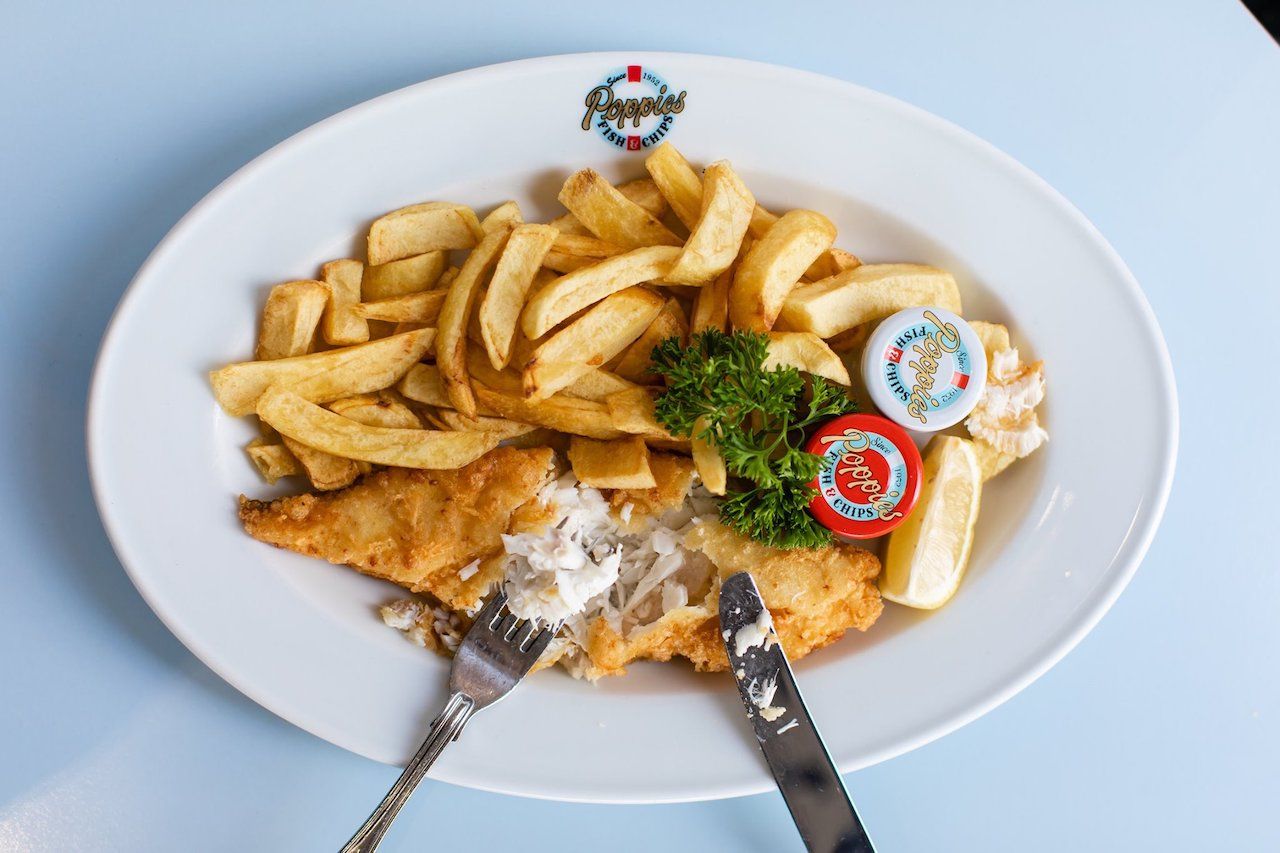 The iconic fish and chips (a crispy battered fried fish filet with a side of golden French fries and mushy peas) is one of the UK’s favorite foods. Sure, it’s probably slightly better eaten in a coastal town, but Londoners still take the dish seriously and you can find excellent chippies (the colloquial term for a fish and chip shop) throughout London. The classic pub meal pairs well with a local beer and comes with a vital set of condiments that any self-respecting Londoner has an opinion on. A combination of malt vinegar, salt, tartar sauce, and freshly squeezed lemon are some of the most popular additions to the fresh-out-of-the-fryer piece of cod or haddock. Chippies are sprinkled throughout the city, but check out Poppies, Sutton and Sons, Toff’s, and Golden Fish for some of the best. 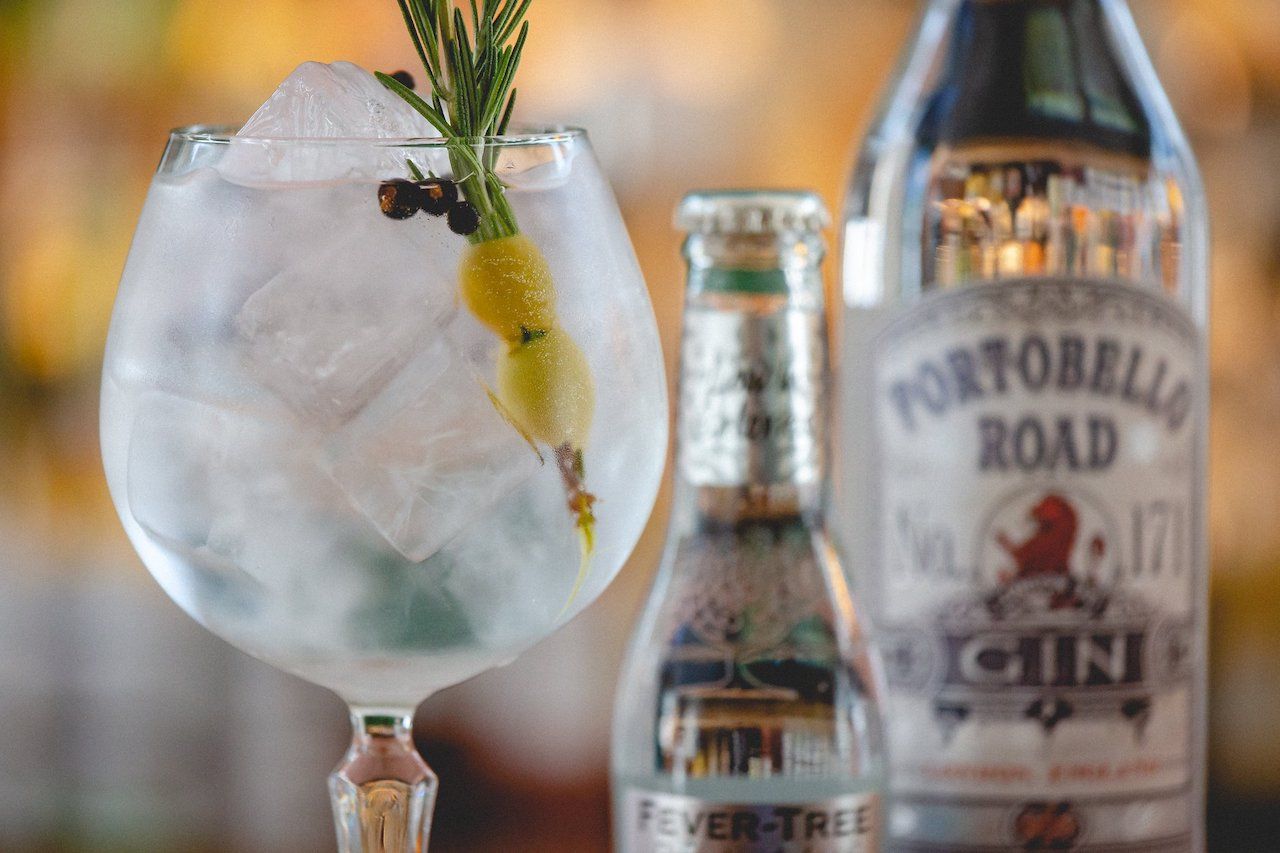 Gin & Tonics are making a comeback. While the Brits have always loved a G&T (a lot of the most famous gin brands are British — Beefeater, Tanqueray, and Gordons, to name a few), in the past decade, London has put itself on the map as a gin destination. There are 24 gin distilleries in London, many of which you can visit. Add on the many bars specializing in the G&T and you’ve got yourself plenty of places for a refreshing drink. Many of these bars have specialty flavored tonics to pair with the different gin varieties for a more distinctive cocktail. There’s even a gin hotel in Notting Hill, The Distillery, that has numerous gin bars and a gin school where guests can learn about all things gin while tasting a few of the famous cocktails. 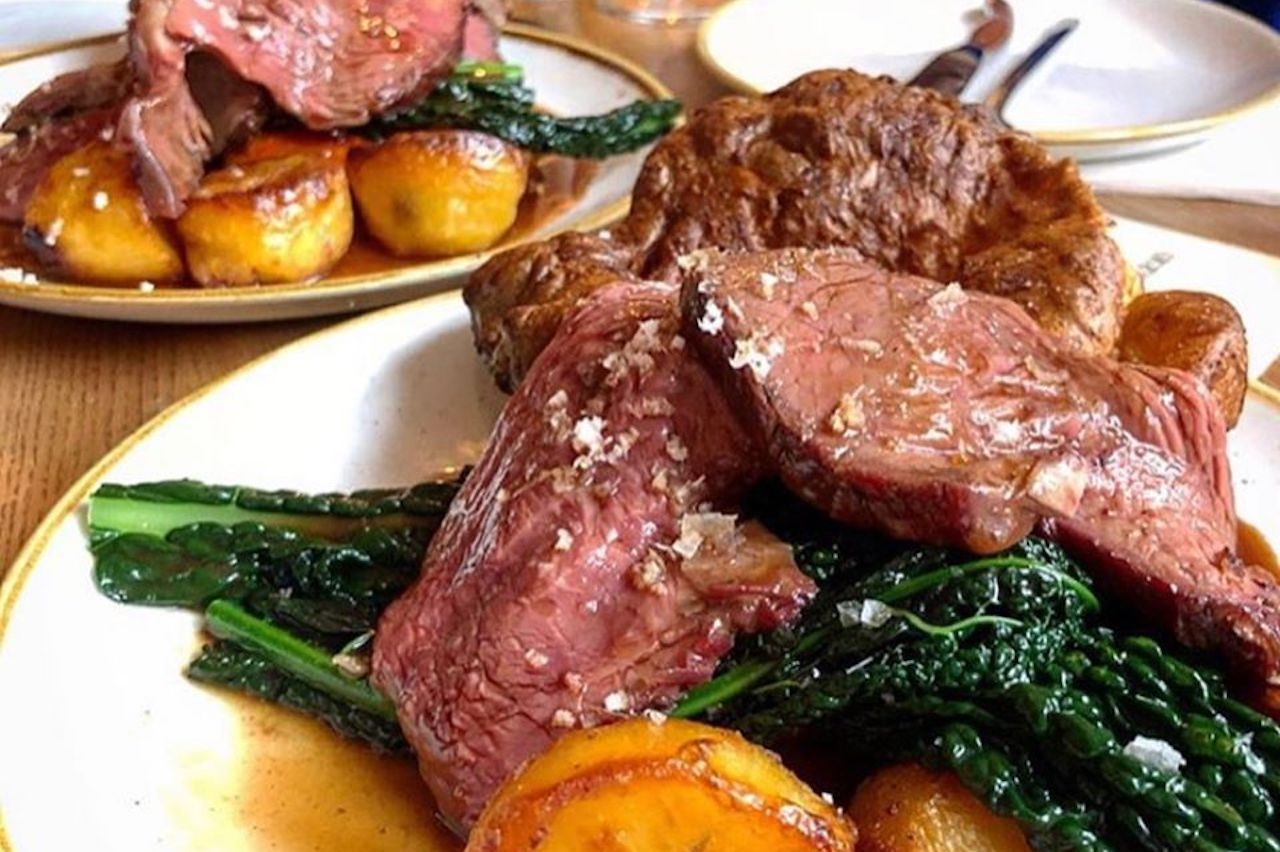 If your trip to London falls over a Sunday, taking part in a Sunday roast is both memorable and filling. This British tradition is taken very seriously by locals, and most pubs and British restaurants participate in the ritual. Each week, locals gather at their neighborhood gastropub with friends and family on Sunday afternoon to share a large hearty meal and catch up on the past week. Diners choose from an assortment of meats — chicken, beef, lamb, and pork — served communally with veggies, potatoes, and Yorkshire pudding (a sweet, bread-like pastry). Most restaurants serve the meal beginning in the early afternoon, but it can be eaten as lunch or an early dinner. Check out the Bull and Last for its legendary Sunday party or the Compton Arms for a more laid-back atmosphere. 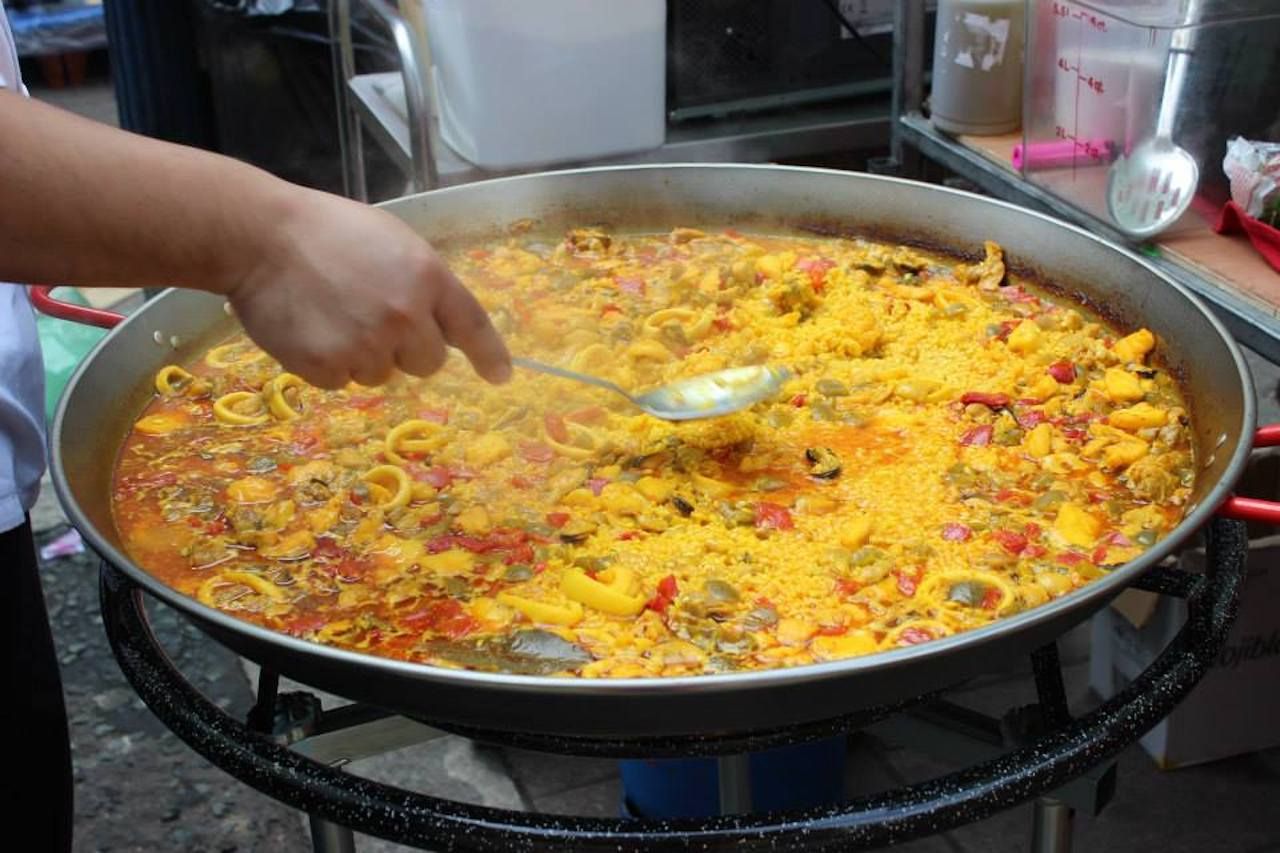 If the gray skies of London have you down, the colorful Jamaican food and rum cocktails of south London, one of the world’s largest Jamaican expat communities, are sure to cheer you up. Brixton and Dalston’s Caribbean community serve up island staples, from spicy jerk chicken to cod fritters to curries. Brixton Market and Brixton Village are perfect to wander and sample the many Jamaican and Caribbean specialties and, as a bonus, are much less touristy than some of London’s other markets. 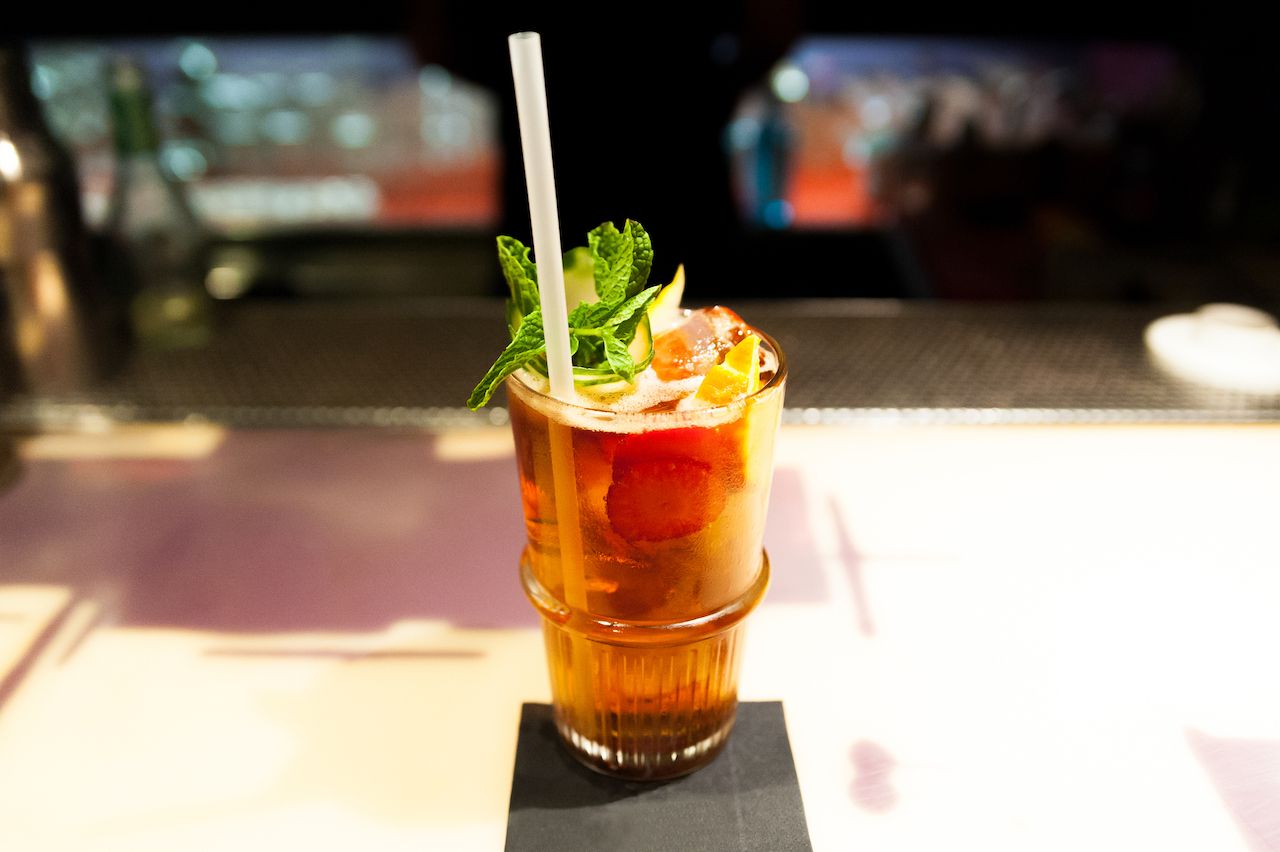 As temperatures rise and the sun emerges, Londoners celebrate with a post-work Pimm’s Cup. This cocktail is made with lemon soda or ginger ale, its namesake gin liqueur Pimm’s No. 1, and a fruit and mint garnish. It has been London’s beloved summer cocktail since the 1800s. James Pimm, the owner of a London oyster bar, invented the drink sometime between 1823 and 1840, which he originally marketed as a health tonic. Today, the refreshing cocktail is the official drink of the Wimbledon tennis tournament and is a favorite among Londoners. Lido Café in Hyde Park is the perfect location to enjoy a cup on a sunny day, and The Spaniards Inn has an expansive patio and serves Pimm’s by the pitcher.