It’s not that Long Island has a bad reputation, it’s just that most people can’t tell you anything about it. Outside of those in the tri-state area, most Americans’ knowledge is limited to Billy Joel songs, reruns of Everybody Loves Raymond, a woman who harasses people at the deli counter claiming to hear people’s dead relatives, and a railroad. You’ve probably met a lot of people from Long Island, and only a few were fist-pumping meatheads with “Strong Island” tank tops. But aside from the fabulous, exclusive Hamptons (which are only kinda Long Island), it’s right down there with rural Oklahoma as a place you’d think to visit for vacation.

But the Long Island you’ll discover if you take a trip east of Brooklyn and Queens is a serene, seaside place full of lush nature, wineries, breweries, beaches, and plenty of seaside charm. For a relaxing weekend escape, it’s one of America’s greatly underrated getaways, even if you live nowhere near New York City.

A castle to begin your weekend bliss.

Breezing east out of Queens — technically part of Long Island but, like the Hamptons, not really — the trees get thicker as the traffic gets thinner through Hempstead and Hicksville. About 40 minutes into the drive, you’ll arrive at the gates of the century-old Gold Coast mansion known as Oheka Castle. At 109,000 square feet, it’s the second-largest private residence in the nation, a venerable Versailles of America with palatial gardens and a grand main house filled with ornate ceilings and towering chandeliers. It was the creation of German banker Otto Hermann Kahn (hence the name O-He-Ka) who built this palace on a hill to show up the New York high society who shunned him because he was Jewish.

Kahn also commissioned Seth Raynor, the premier golf architect of the era, to design a par-71 golf course on the grounds because the local country clubs would not let him in. It’s still there, now the members-only Cold Creek Country Club. Oheka also has an entire bar devoted to Kahn’s frequent guest Charlie Chaplin, complete with photos, posters, and hand-written letters.

The mansion was a military academy and then an abandoned flophouse for decades after Kahn died. Then in the 1980s, developers restored it to its former glory, and in 1987 Oheka, reopened as a wedding venue. It now serves as a 117-room hotel with a long gravel drive where weddings still dominate the weekends, as well as a cool place to call home while on Long Island if you’re willing to splurge. 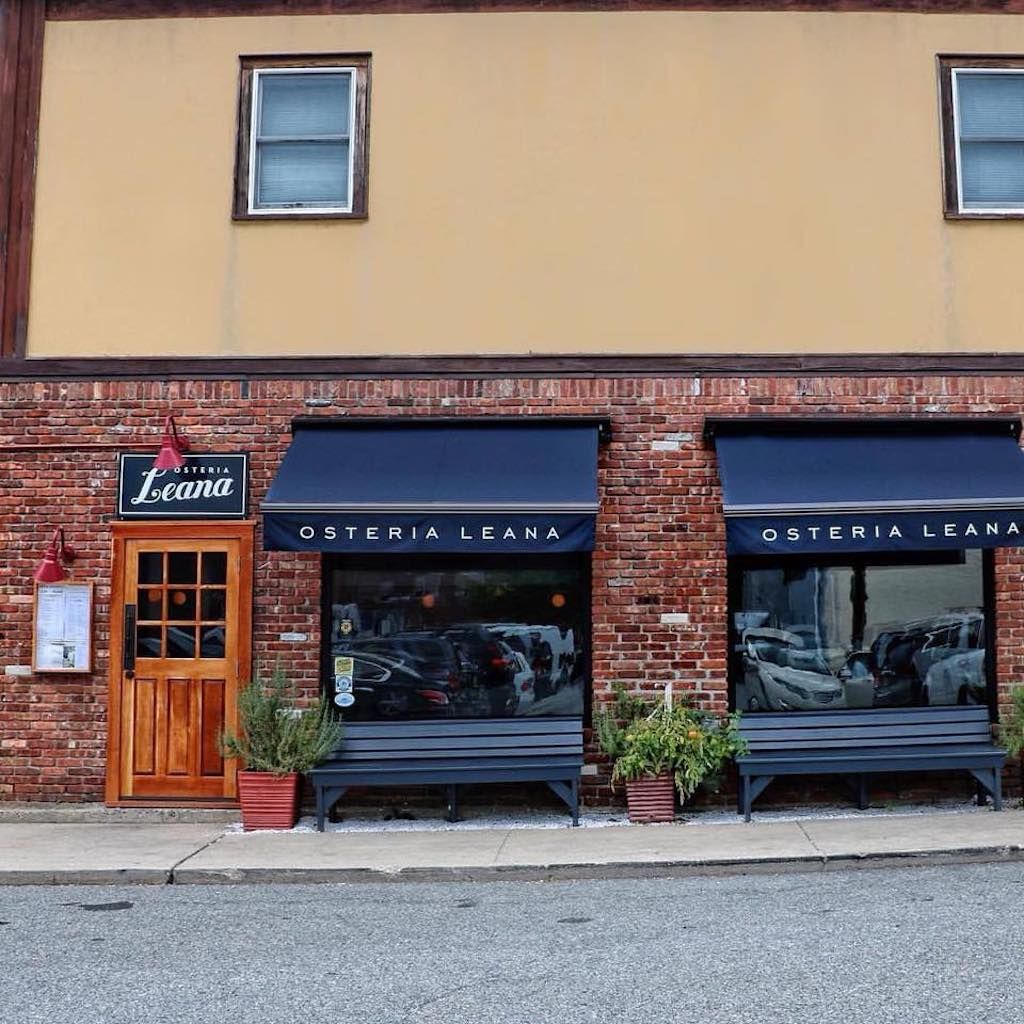 Bars that feel like they came out of a Billy Joel song.

Staying at Oheka Castle will make you not want to leave, but getting out and seeing the surrounding towns is well worth it. Your best bet for a first night is charming Oyster Bay, known as the hometown of Long Island’s favorite son, Billy Joel. The small downtown is lined with bars where you’d expect to see blue collar workers and dads catching a break. Small, unpretentious places that seem like the sort of joints that inspired much of the Piano Man’s music.

The town is dotted with little local restaurants that serve Long Island wine whose chefs are as good as you’d find in trendier places in Manhattan. Wild Honey is a New American spot, located in the center of downtown, where a seafood-heavy menu is served in a relaxing, intimate environment. Down the street, you’ll find Osteria Leana, a little Italian gem with housemade bread and pasta that pairs a constantly rotating menu with local wines. Dinner in Oyster Bay followed by drinks strolling through downtown in the summer is both serene and delicious, leaving you full, calm, and completely removed at the end of your first day. 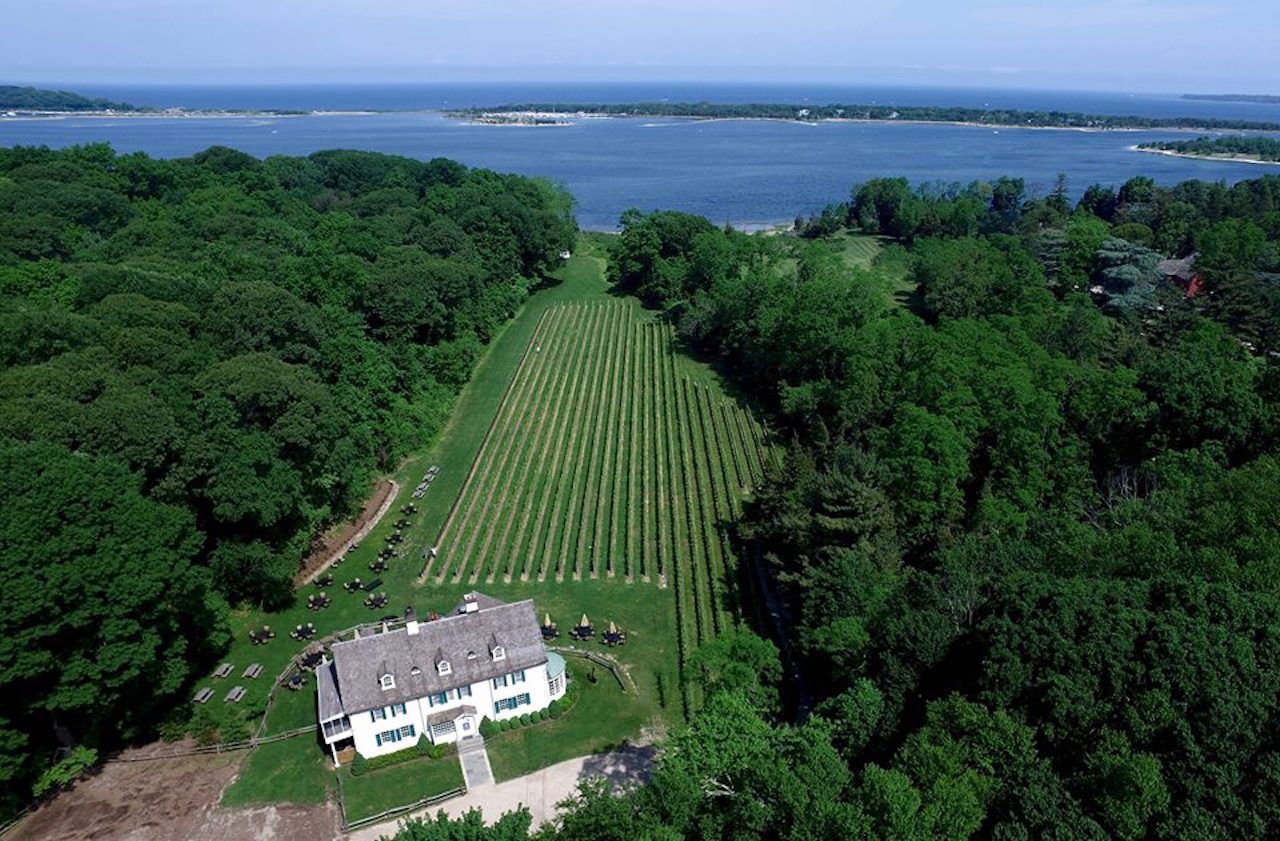 Wine tasting in luxe private vans and jazz at night.

Begin your second day by heading through lush summer greenery down Route 25A past Huntington and Smithtown, and you’ll find the waterfront winery at Harmony Vineyards. Here, you can taste wine under the sun on a sprawling patio while looking out at vineyards that stretch to Long Island Sound. Though the weather may beg for white, the Cabernet Sauvignon and the Red Blend are the go-tos here.

From Harmony, head about 45 minutes through the Rocky Point State Preserve to the Riverhead Long Island Railroad station. It’s the gateway to the North Fork Region where you’ll find the highest concentration of wineries and breweries on the island. During summer, the area runs the North Fork Link, a fleet of luxury vans with WiFi and power plugs that stops at seven wineries, as well as the Riverhead Cider House and Long Island Vodka Distillery. It’s a free hop-on-hop-off service running every 30 to 45 minutes and allows you to have a full day of wine tasting without the need to drive.

After dining at one of the wineries, finish the evening back in Stony Brook, a village whose name belies its serenity. The Grist Mill, situated beside the pond across from town’s main center, gives Stony Brook a calming soundtrack of lapping water. A short walk away is the Jazz Loft, a combination jazz museum and live music venue set in an old stone building, parts of which date back to the 1850s.

The ground floor is full of jazz posters, instruments from legendary musicians, and other jazz memorabilia. It’s also got a full research library with rare master recordings, rounding out perhaps the largest private collection of jazz artifacts on public display. Once you’ve perused the collection, head upstairs to the small music venue, where almost-nightly performances are held on a three-level bandstand made of floorboards from the Roseville Ballroom. 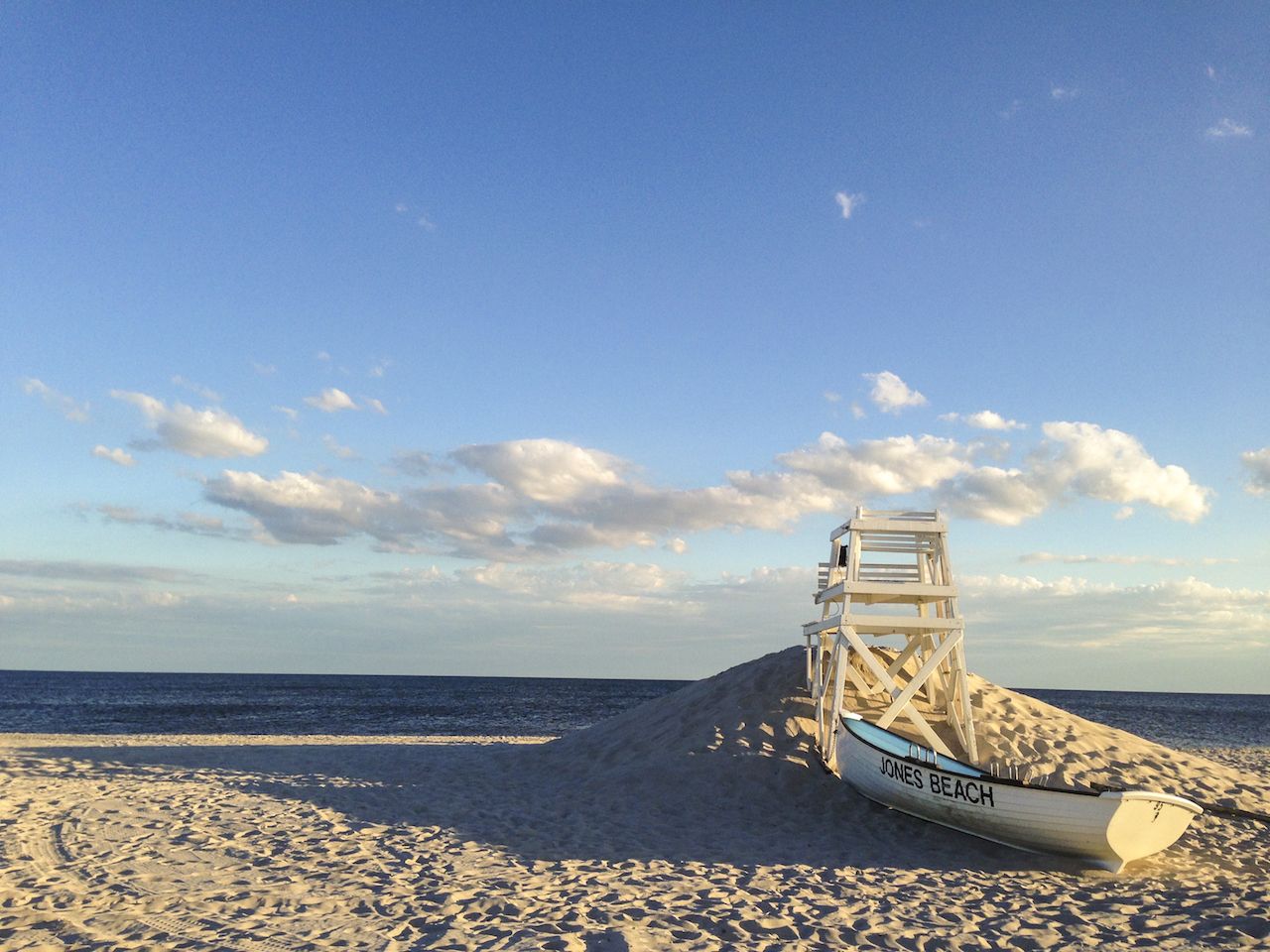 Wander through a meditative maze before hitting the beach.

Stony Brook is also a fine starting point for day three, which you can begin with a head-clearing, energizing stroll through the Avalon Park Nature Park and Preserve. This hiking path and botanical garden are set on an old spy trail from the American Revolution, leading hikers to a tranquility circle — a sort of pagan labyrinth surrounded by trees designed to help visitors meditate while navigating their way around. The entire trail is either paved or situated along boardwalks that cross duck-filled ponds, and it takes less than an hour to walk.

Summer weekends are incomplete with a trip to the beach, and conveniently Long Beach is right on the way back to NYC. Twenty miles from downtown Brooklyn doesn’t seem like someplace you’d find a breezy seaside escape, but the 2.1-mile boardwalk here feels every bit the picture of northeastern beach town lined with shops, arcades, and bars slinging cold beers. The sand itself is softer and whiter than you’ll find in some parts of Florida, and while it rarely gets mentioned when discussing northern beach locales, its shoreline is one of the best. A little further north, you can hit Lido Beach and Point Lookout Park for a more natural beach experience. Just make sure to eat before you go since nowhere there sells food; the famous Gino’s pizzeria is never a bad decision. 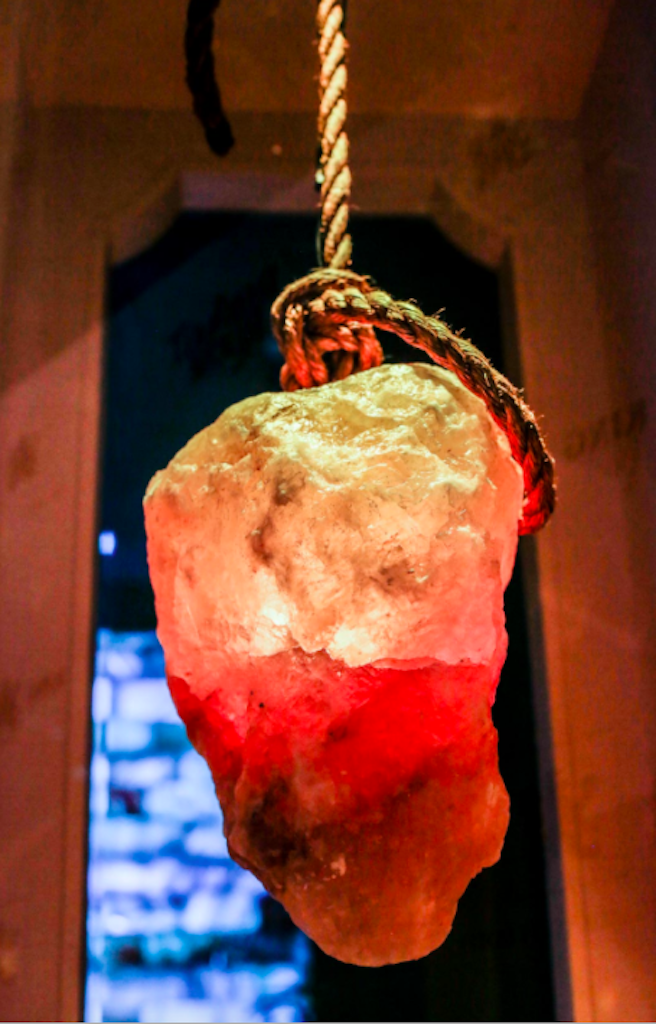 Finish with a steak dinner aged in pink Himalayan salt.

A long day of beaching will have you a little peckish, and though there’s no shortage of fantastic restaurants on Long Island, the best new restaurant is at the Garden City Hotel in Garden City. You’ll drive past stately Victorian mansions and brick homes before arriving at the hotel famous for being a hangout for jockeys from nearby Belmont Park.

Here, you’ll find the Red Salt Room steakhouse, celebrity chef David Burke’s latest New York endeavor that’s already among the best steakhouses in the state. The space is done up in red salt blocks (please, no licking) and dark colors, giving you the feeling of eating in a salt steak-aging room. Burke uses pink Himalayan salt to age his steaks in the actual aging room located onsite. It creates intense flavor in his prime cuts of meat and makes for a satisfying end to a relaxing weekend. With Sunday traffic dying down after a late dinner, it’s a fairly painless ride back to New York. Or you can splurge on a night at the Garden Hotel before a Monday flight home out of ISLIP or any of New York City’s airports.

Long Island isn’t New York City — not by a long shot. It’s quite the opposite, actually, and makes for a perfectly calming escape from city life no matter where you call home. It might not have the sexy connotation of a Martha’s Vineyard or a Napa Valley, but it’s got all the charm and less of the pretension. If nothing else, it’ll give you a new appreciation for a place you previously knew nothing about — and something to talk about when you inevitably meet someone who grew up there.

Insider GuidesThe 18 Best Trips for 2018
Tagged
Beaches and Islands Culture Insider Guides Wine
What did you think of this story?
Meh
Good
Awesome

From Tip To Tip, These Are Long Island’s Best Hiking Trails