Budapest officially became a city in 1873 following the unification of three cities: Buda, Pest, and Óbuda. Despite its relatively new modern jurisdiction (at least by European standards), it’s seen thousands of years of European struggle, conquest, and progress. One of the best places to take this history in is from the lookout points in the Buda hills surrounding the city. Because you aren’t already going to do enough walking on a trip to Budapest, venture into the mountains to check out these lookout towers, each a piece of Hungarian history in its own right. 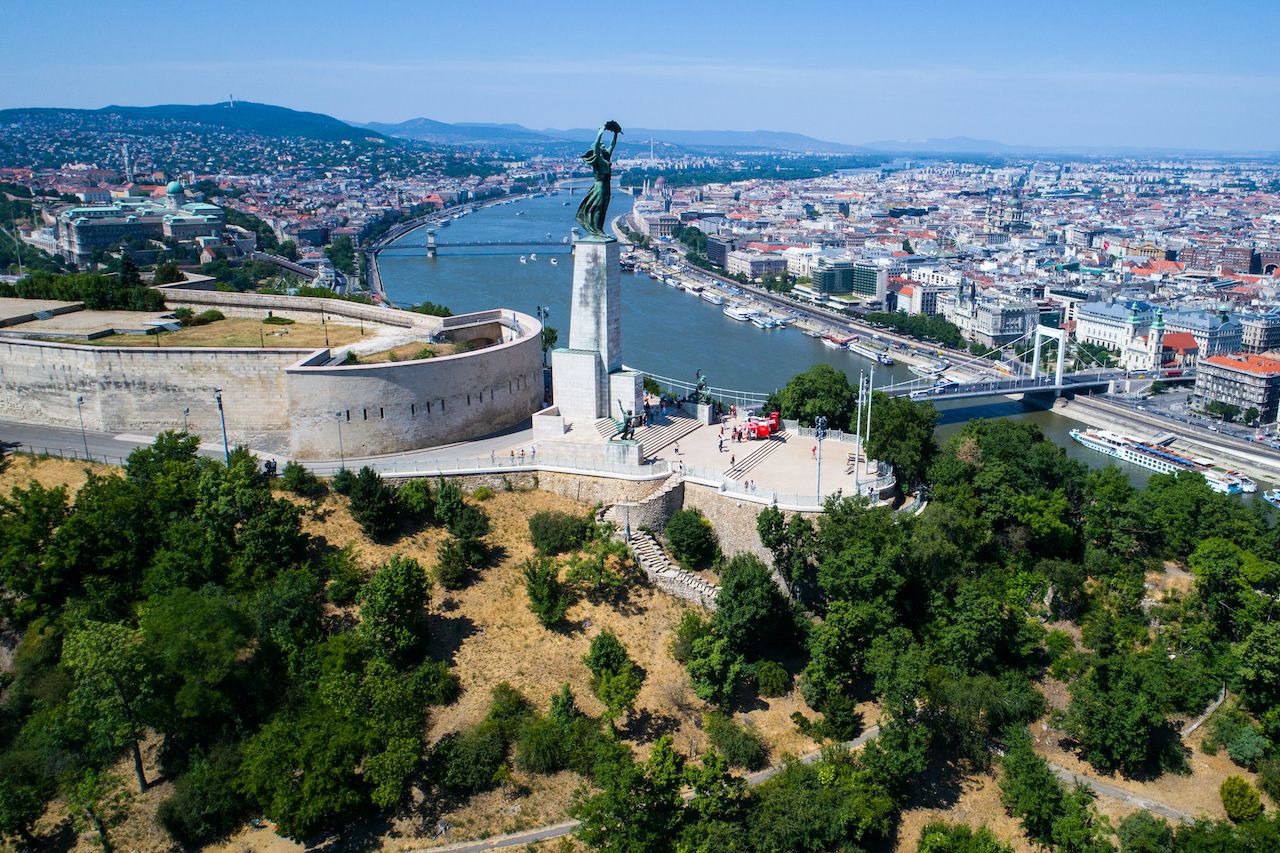 Start with Citadel atop Gellért Hill. This lookout point is actually an entire fort, and is one of the most important historical locations in the city’s modern history. It was constructed by the Austrian military in the mid-1800s to assert power over the Hungarians, and then occupied by the Soviets during the Hungarian Revolution in 1956. Check out the adjacent Liberation Monument while you’re up there, which was built after World War II and before Soviet rule. Today, the Liberation Monument stands as a tribute to peace in Budapest.

Getting there: Gellért Hill is in the center of the city and adjacent to the Danube River. The fort and monument are accessible via a number of easily identifiable walking paths. While you’re there, check out the Garden of Philosophers and the observation deck at Kilátópont. 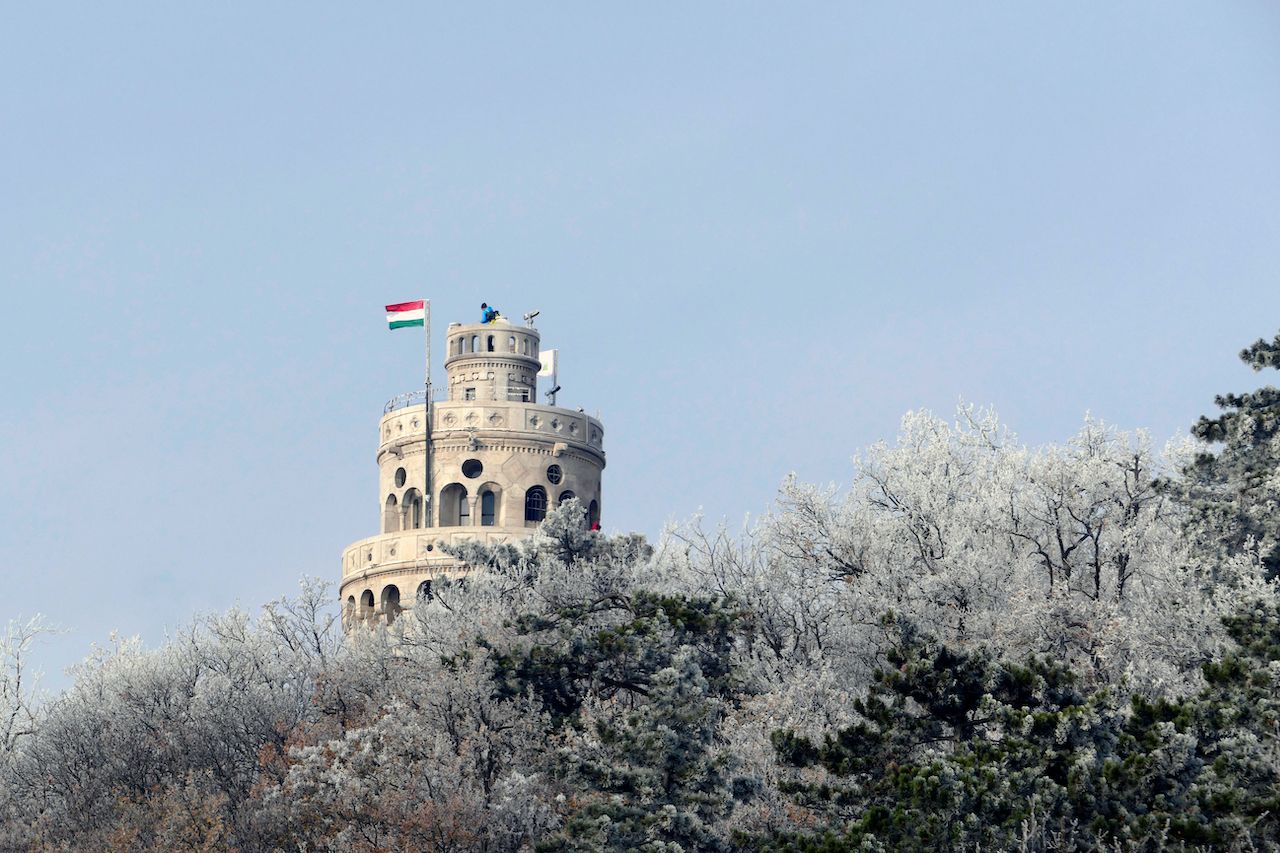 János Hill is the highest point in Budapest and home to the Elizabeth Lookout Tower, a massive structure that more resembles an old cathedral than a typical observation point. You can hike up the 1,700 feet to the monument or take the Zugliget Chairlift, which cuts the climb down to a fraction of its full self. The architect Frigyes Schulek designed the tower, which was erected in 1910 in honor of Empress Elizabeth of Austria. Walk up the 134 steps to the top and you can see as far as the Tatras on a clear day.

Getting there: János Hill is east of the city center and accessible via bus from the downtown Nyugati station. The easiest way to get to the top is the chairlift, though you can opt for the Children’s Railway also — get off at the fourth stop, named after the hill. 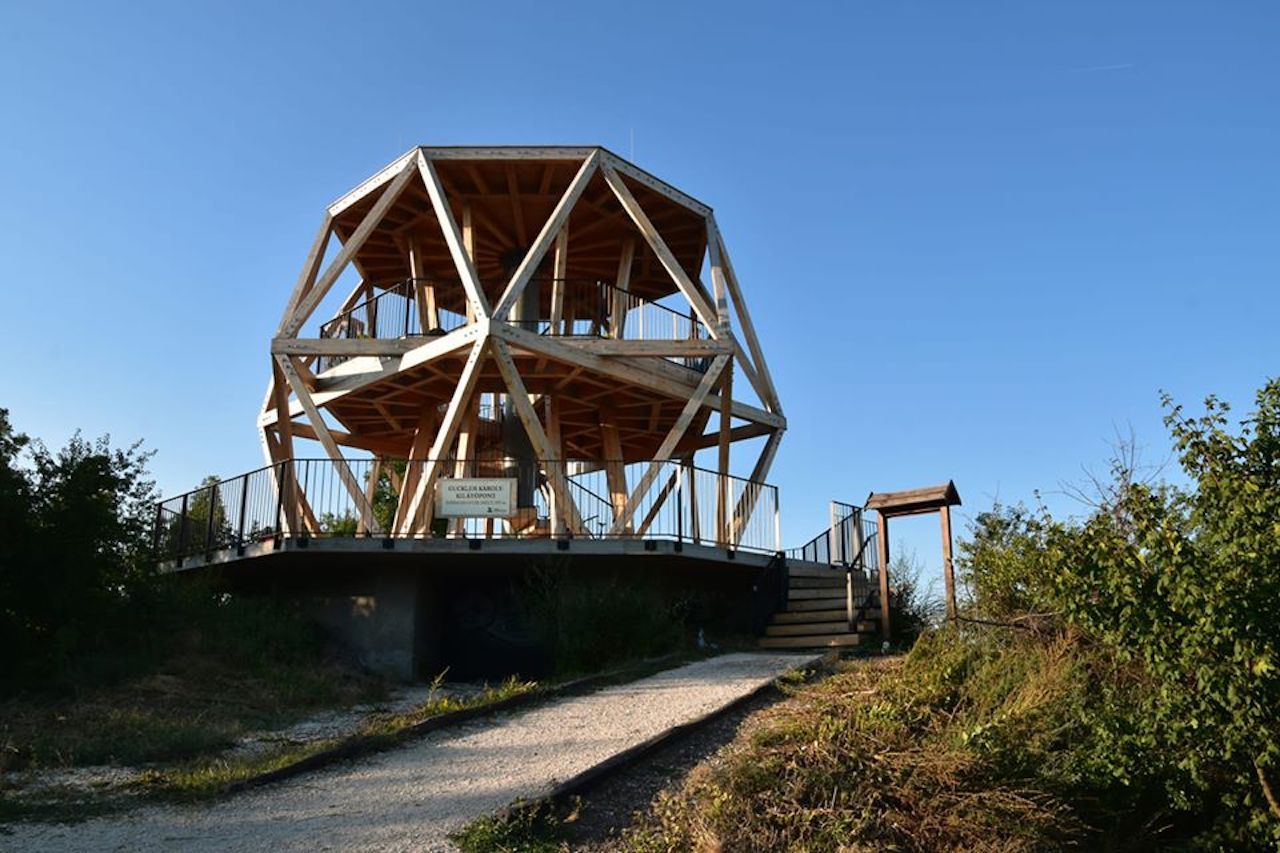 Budapest’s newest lookout tower opened in 2016 and looks like something from an amusement park, though the hill it stands on has a history that is anything but leisurely. Axis soldiers used Hármashatár Hill as a bunker to spot and attack Allied fighters during World War II. The tower stands alongside where their bunkers were, and you’ll have to put in a moderate hike to reach it. Once there, the wooden, octagon-shaped tower offers all-encompassing views of the metropolitan area surrounding Budapest.

Getting there: Take bus 65 from Kolosy Square to its terminus. Then, hike up the hill via the easily noticeable trail, which takes just under an hour. You’ll see the tower as you reach the summit. 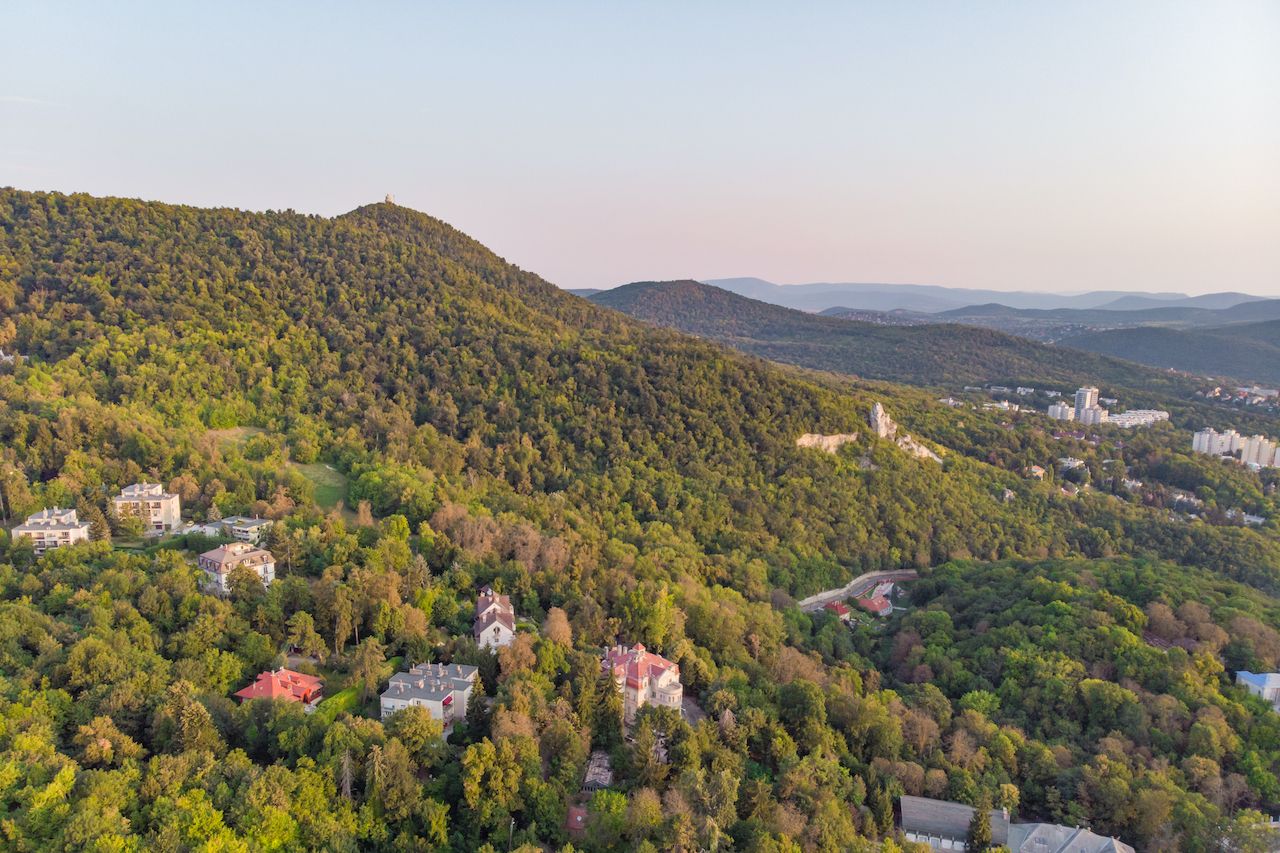 This tower is named after Count István Széchenyi, remembered as “The Greatest Hungarian” because of his modernization efforts in the 1800s. He had a small but mighty lookout tower built in his honor in the hilly Svábhegy neighborhood above the city in 1898. His bust greets you as you approach, surrounded on either side by a staircase leading to views of the city from the west. Turn around and take in the surrounding Buda Hills.

Getting there: Take the Children’s Railway to the end of the Szechenyl Hill line. The tower greets you as you walk briefly along the hill. 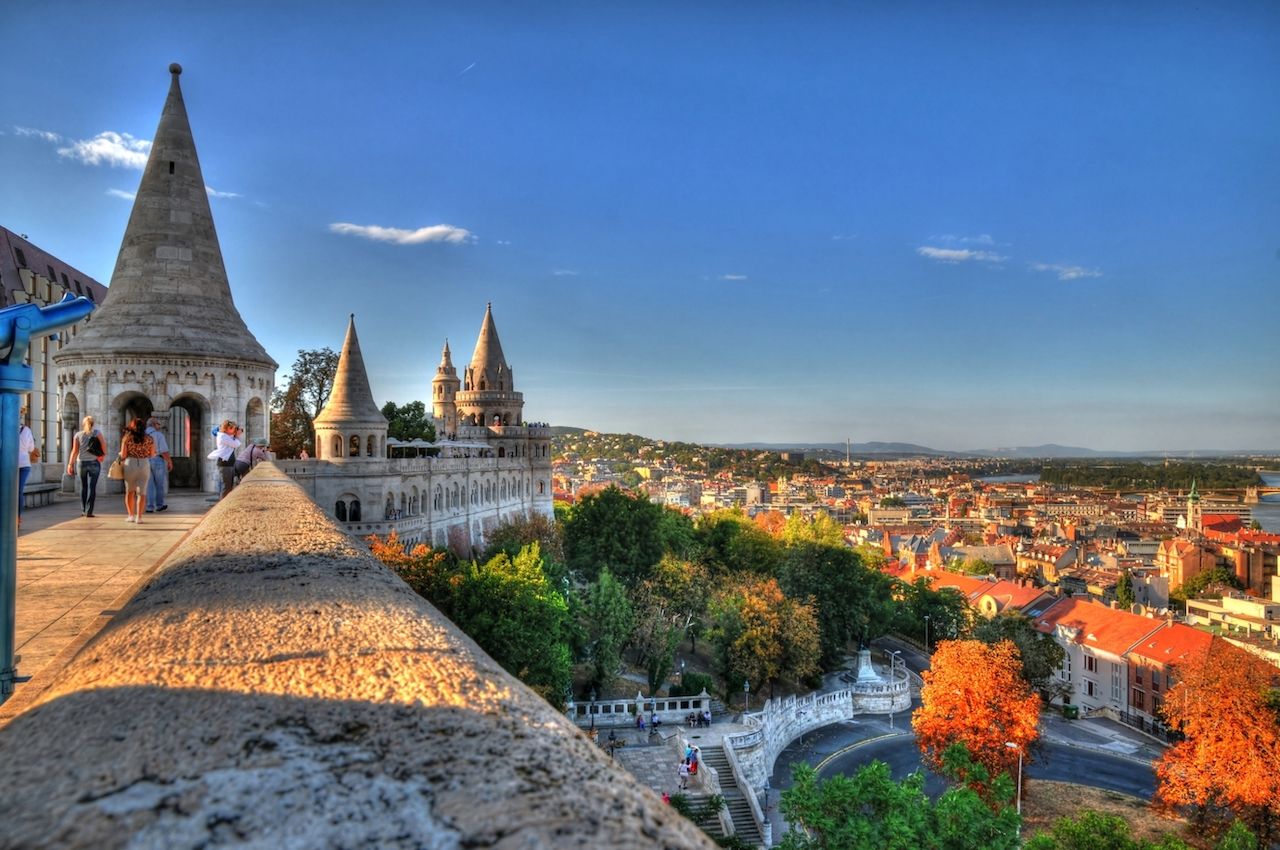 Fisherman’s Bastion, built in the late 1800s, offers better views than anywhere else on the Pest side of the city. Climb the fortress to take in views of the Danube, center city, and the hills west of the town. Any guided tour of Budapest will include a stop here, as it earned its place in Budapest lore by showcasing all sides of the area’s history. While the monument’s seven turrets represent the seven tribes that settled the Carpathian Basin during the Middle Ages, its construction ruined the foundation of the adjacent 13th-century church.

Getting there: Take the Buda Castle Funicular up Castle Hill, and Fisherman’s Bastion is just a few minute’s walk from the terminus.

WellnessThe 7 Fanciest Thermal Spas in Budapest You Need To Check Out
Tagged
Art + Architecture Insider Guides
What did you think of this story?
Meh
Good
Awesome