While studies have shown that humans have eaten psilocybin throughout our evolution, magic mushrooms are having a moment as of late. Within the last couple of years, progressive cities like Santa Cruz, Ann Arbor, and Denver, as well as the state of Oregon, have decriminalized “the flesh of the gods,” and mushrooms might soon enjoy the kind of cultural and legal acceptance that cannabis has gained in the last decade. Such legalization could offer relief to thousands: Research from John Hopkins and the National Institute of Health indicates that mushrooms can ameliorate PTSD, OCD, severe depression, and other mental illnesses.

In New York, mushrooms remain a Schedule 1 drug, meaning that, in the eyes of the law, psilocybin is an illegal substance with no accepted medical benefits. However, if you know where to look, they’re about as easy to procure in the city as cannabis (that is to say, they’re as accessible as a bag of chips or a pint of Van Leeuwen’s Ice Cream). CBD stores, smoke shops, and even some bodegas sell mushrooms more or less in plain sight. And if you’re not excited about choking down dried caps like people did in the ‘70s, psilocybin-infused goodies (chocolate bars and truffles, honey, hot cocoa mix, tinctures, you name it) are widely available, too. 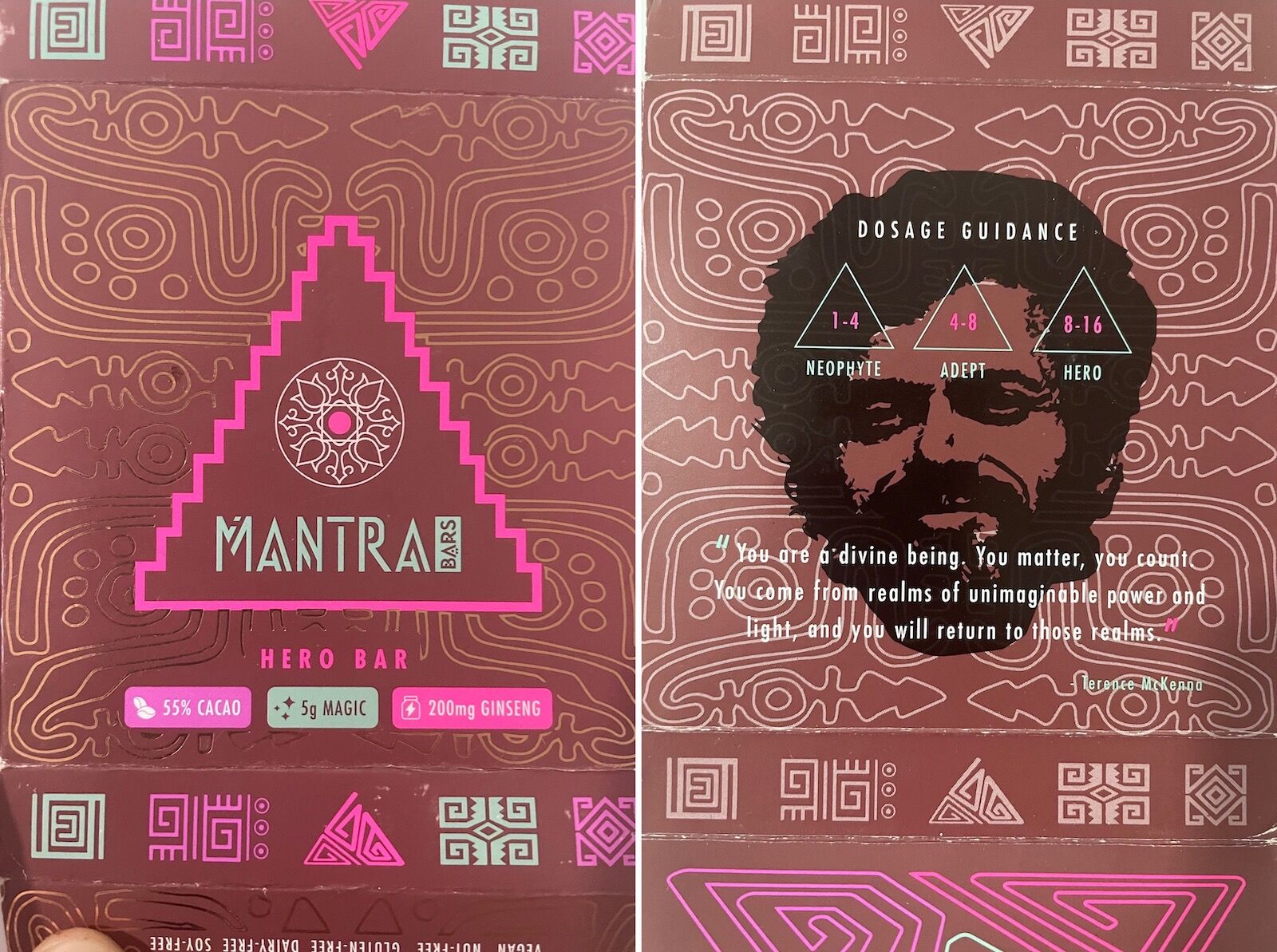 After hearing a chorus of praises from trusted friends about mushrooms, I resolved to find out for myself what they are all about. Stopping in at a CBD store in the Alphabet City neighborhood of Manhattan, I picked up a psilocybin-infused chocolate bar for about $60. The bar’s label, emblazoned with a trippy mandala, advertised “200 mg of ginseng, raw cacao, and 5 grams of ‘magic.’” My girlfriend and I had planned a hike in the Hudson Valley for the coming Sunday, and we figured it would be as good an opportunity as any for a dive into the deep end.

On the fateful day, we rose at 8 AM to journey to Beacon, New York, a quaint colonial town about 70 miles north of the city on the Hudson River. Along with the chocolate, we packed the usual supplies for a hike: water bottles, a blanket, an external phone charger. As friends had advised, I made sure to get a good night’s sleep the night before.

The trip from my apartment in Brooklyn took about 3 hours, including a 1.5-hour train ride from Grand Central Station. As the smoke and asphalt of the city dissolved in the rearview, we passed through small hamlets in Westchester County, then long stretches that featured only the Hudson river and forest in sight. After an hour on the train, we spied the remnants of an abandoned castle on Bannerman Island. By noon, when the conductor announced Beacon as the next stop, we felt a world away from the Big Apple’s rush and roar. 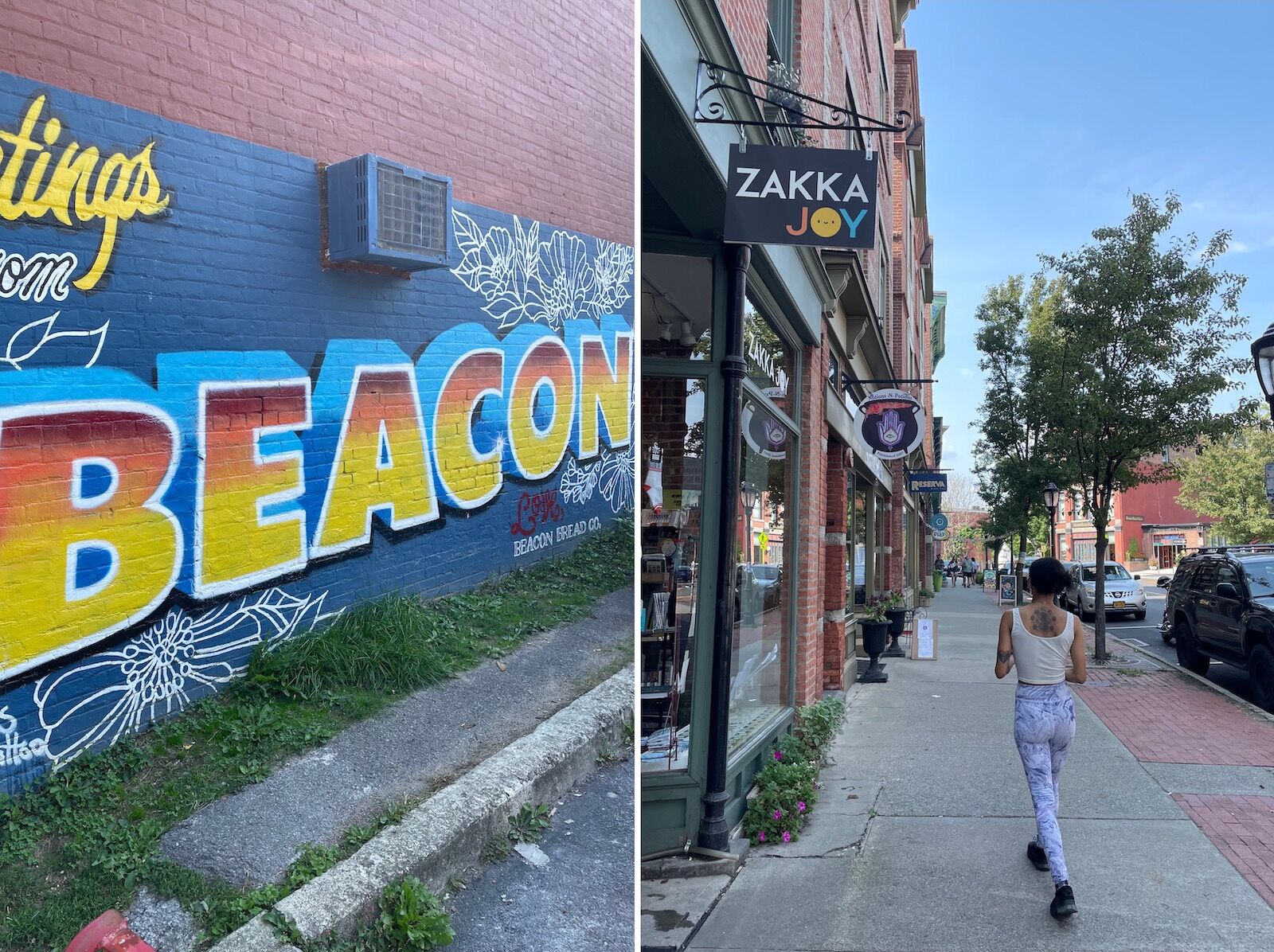 We spent the first hour in Beacon exploring the town, relishing the colonial charm, taking in views of the fjord-like Hudson, and stopping by the Sunday Farmer’s Market, where we picked up some local hot sauce. Beacon Mountain, a green cone visible from Main Street, is the town’s most well-known hike, but the way up, locals informed us, was steep and challenging. Opting for a chill nature walk in lieu of a rigorous climb, we found a series of lazy trails along the Hudson.

On a bench by the water, we divvied up the chocolate bar, comprised of four squares each that were in turn subdivided into four triangular pieces to create 16 pieces total. On the inner packaging, a quote from hippie-philosopher Terrance McKenna offered a reassuring pre-trip reminder: “You are a divine being. You matter, you count. You come from the realms of unimaginable power and light, and you will return to those realms.” On another flap of the packaging were dosing instructions: one-to-four triangles for a mild trip, four-to-eight for a mesodose, and eight-to-16 for a heroic trip. My girlfriend and I initially ate four small pieces each, then two more once we were on the trails.

After about 20 minutes, I began to feel the first gentle and subtle effects of the psilocybin. While I stood admiring the river from Beacon’s promenade, the sunlight on the water congealed into shimmering sheets of liquid platinum. I remained lucid and clear, but my train of thought began to take strange detours. Engrossed in the beauty of my surroundings, I felt any residual worry and anxiety fade away.

An hour in, the trip started in earnest. Overcome with heaviness, I had to sit down, then lie down, on a tree trunk by the water. Mild nausea set in, and I chided myself for having a beer and cheeseburger for lunch. As I stared up at the sky from the tree trunk, the clouds came alive and started opening, closing, and shifting with a will of their own. Suddenly, I noticed a face — wizened and sporting a long beard of white tendrils — watching the world from within the clouds. I wondered if such visions were the origin of the Sky Father myth that’s popular across history and cultures (Zeus in Greece, Odin in Scandinavia, and Indra in India). Around the same time, the gentle lapping of the Hudson became the heartbeat of the world. I reflected how after I died, and after even the buildings of Beacon crumbled away, that gentle rhythm would continue.

When heaviness and nausea passed, we got up to walk the trails. As I strolled through the woods, the boughs and leaves of the trees danced in the wind with all the grace and choreography of a ballet. My girlfriend and I traded notes on what we were experiencing, but we were both too mesmerized by the visuals for prolonged conversation.

My thoughts turned to religion. I contemplated the Vedic assertion that we, at our most fundamental level, are nothing less than god. This declaration somehow made sense. Our bodies, minds, and senses are the portals through which god (the self) enjoys the majesty of his handiwork, the physical plane. I had the epiphany that the universe is moving toward a goal, that creation is evolving with purpose, and that the entire cosmos is a story unfolding. I wish I had written down these thoughts. Such realizations are difficult to retain after tripping, and even trickier to articulate.

The come-down began after three-to-four hours. Reality started to look normal again, but I was still feeling the psilocybin. I laughed at everything — a goofy memory, an inside joke with my girlfriend, a meme I saw when I finally checked my phone — and everything was the quintessence of hilarity. Laughter felt glorious, like releasing pent-up tension in my stomach and solar plexus. We contemplated grabbing dinner in Beacon but decided to head back home and unwind. It was close to sunset, and we were ready to rest. 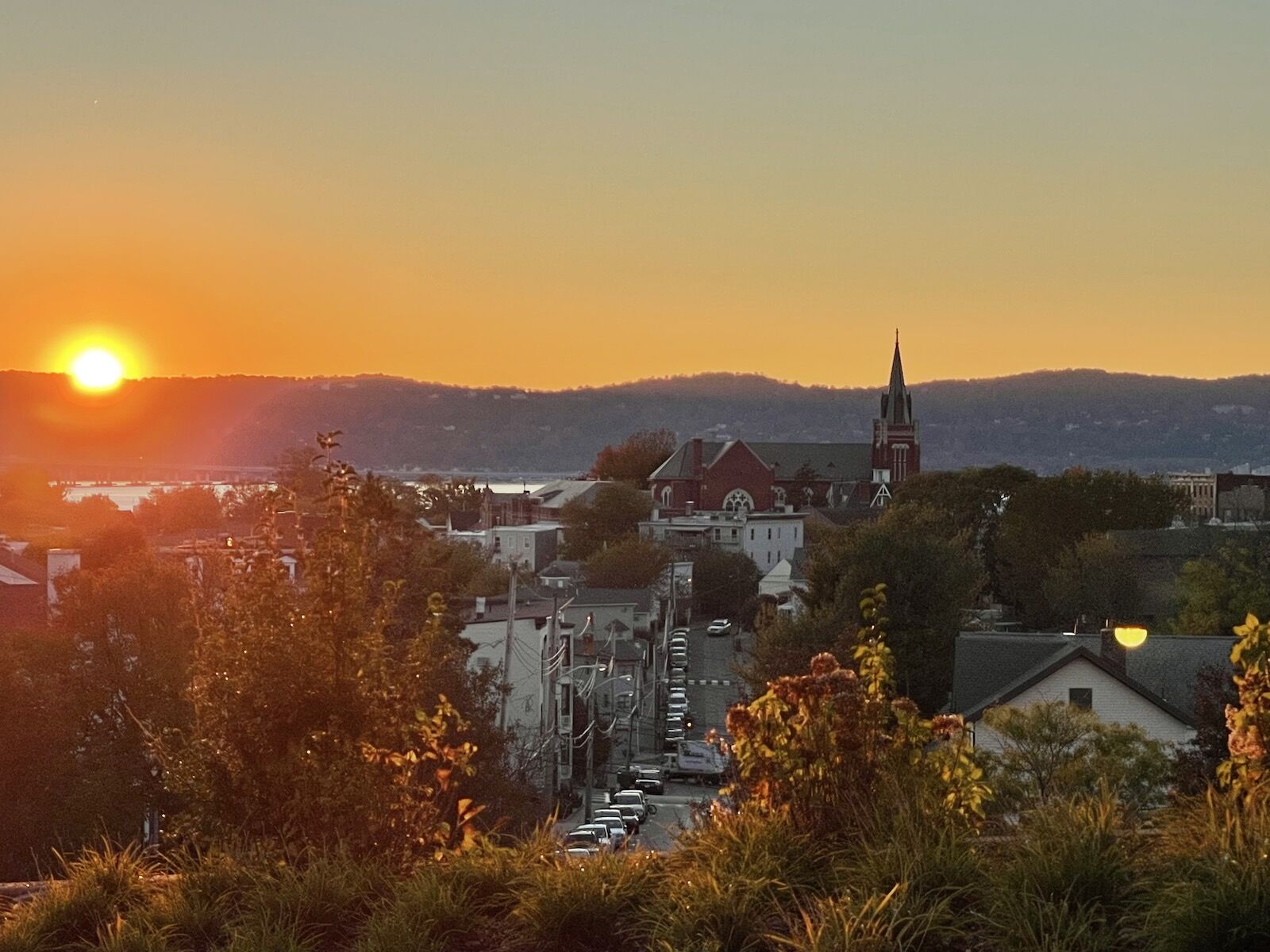 After the trip, I understood why so many people I respect, particularly those with deep souls and keen aesthetic sensitivities, are fans of psilocybin. Mushrooms can be therapeutic and help us see problems from new angles. Psilocybin jostles the mind out of its well-worn pathways, opening up new perspectives. Taken with the right intention, mushrooms are balm for the soul, granting us a deeper capacity for empathy —n both with fellow humans and with nature. Paul Stamets, a prominent mycologist and psilocybin advocate, asserts that “Psilocybin makes nicer people. Psilocybin will make us more intelligent, and better citizens.” I couldn’t agree more. 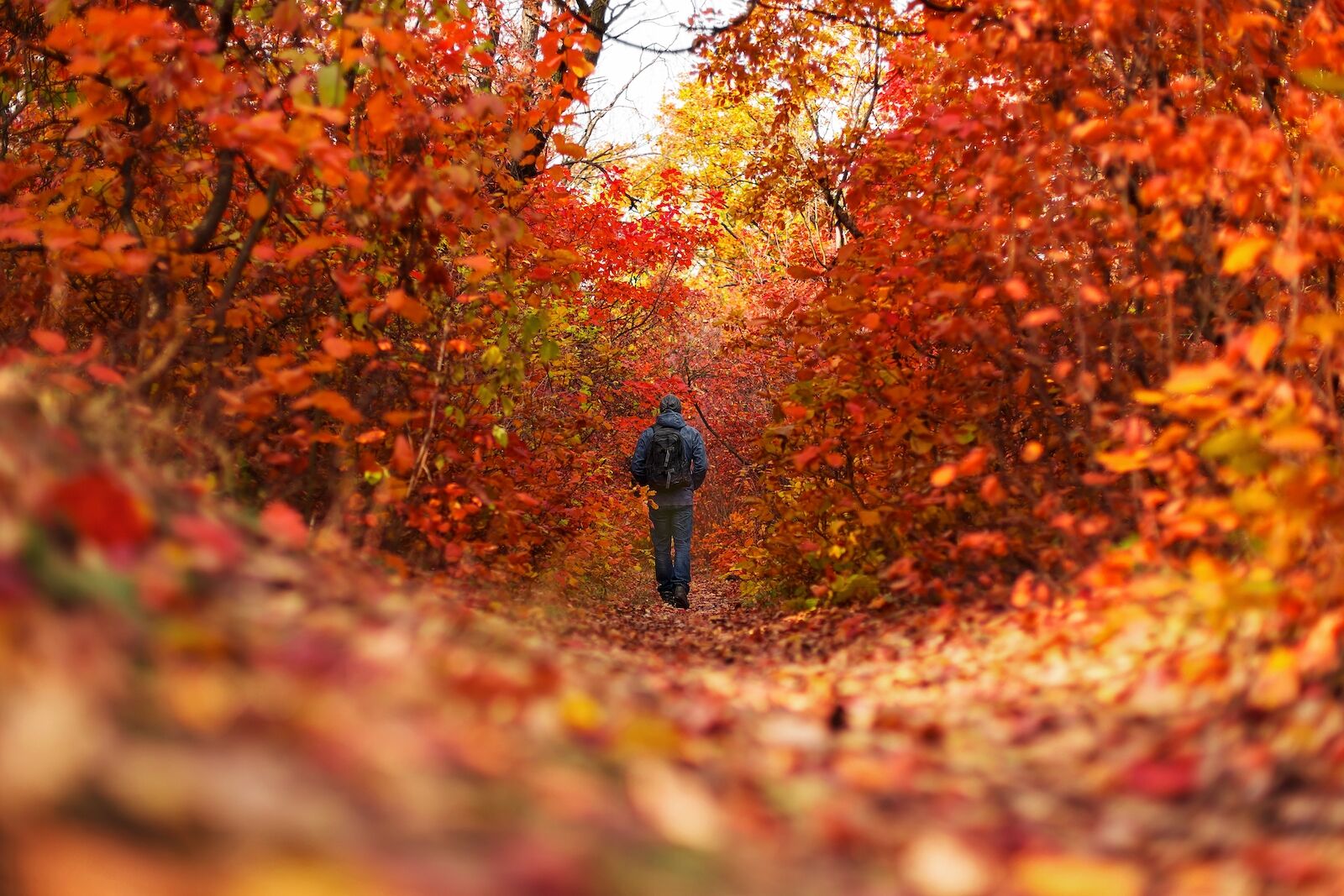 Get out of the city

Take mushrooms somewhere removed from the noise and chaos of the city and in where you can reconnect with nature. Turn your phone off, too. My girlfriend and I chose Beacon, a town on the Poughkeepsie Line about an hour and a half from Grand Central Station. Trains leave from Grand Central to Beacon every hour on weekends, with the last trains returning to the city well into the evening. Beacon is a gorgeous town, but it attracts large crowds on the weekends. From New York City, there are plenty of hikes accessible by public transportation, especially along the Hudson Valley and the quieter sections of Long Island. There are also many gorgeous state parks across New York.

Fuel up beforehand, but not too much

Mushroom trips typically last four-to-six hours, so it’s wise to eat beforehand. Eat a clean and simple meal centered on something like oatmeal, yogurt, or rice. Don’t stuff yourself and avoid alcohol. Like other psychedelics, the come-up phase of a mushroom trip can induce nausea, and when the psilocybin kicked in on this last trip, I regretted the large, heavy lunch (a bacon cheeseburger with an IPA) I had eaten earlier.

Write down your thoughts

Similar to the way insights and innovative solutions can pop up in dreams or on the threshold of sleep, mushrooms loosen the boundary between the conscious and subconscious parts of the mind. Moreover, mushrooms reinvigorate our sense of wonder and appreciation of beauty. Unfortunately, epiphanies while tripping are as hard to retain as the memory of a dream. Bring a journal and pen to write down the thoughts you want to bring back.

For first-timers, I recommend taking one-to-two grams, which is typically enough to trip but won’t cause anything too disorienting or intense. Anything over five grams is considered a “heroic trip,” meaning it’s enough psilocybin to blast you over the moon. Chocolate bars, easily divided into pieces, are an easy way to dose. While mushrooms are non-toxic and overdoses are almost impossible, bad trips do happen. In extremely rare cases, mushrooms can trigger psychosis. Familiarizing yourself with how psilocybin affects your nervous system is not a bad idea before your first trip.

Trip with a friend

For safety and comfort, trip with at least one other person. If it’s your first experience with psychedelics, you might want to consider asking a friend to be your “trip-sitter,” meaning a sober person who accompanies you during your trip. As with all psychedelics, set and setting are crucial, so make sure whoever you trip with is someone you trust and feel comfortable around. It’s also fun to compare notes on the experience during and after the trip.

To protect the privacy of the author, names have been changed.