A line of women are gesticulating at what appears to be a mango bush during a performance at Manggahan, the mango festival held on Guimaras Island in the Philippines. Weaving back and forth, they thrust their hands skyward, as if begging for the rain to fall. A crank turns and the bush rises into a tree, exposing dangling fruit. The women and farmers in the crowd scramble out with long bamboo nets to scoop it up. It’s all just part of one performance on one day of what is surely the best mango festival in the world.

The traditions for the mango festival are well established. It all dates back to 1993 when then-governor Emily Lopez was looking for an event to mark the first birthday of Guimaras’ designation as an independent province. The independence day, May 22, coincides with the peak season for mangoes, Guimaras’ most famous crop. Today, Manggahan festivities last around two weeks. If anywhere is ripe for a mango festival, it’s the Philippines.

The Philippines exports more than $90 million worth of mangoes every year, making it one of the top 10 producers in the world. The most famous variety in the region is the fragrant carabao variety, named after the native water buffalo. Mangoes are the national fruit and are eaten in every conceivable way, including shakes, cakes, jams, salads, and smoothies.

Filipinos enjoy green, unripe mangoes as much as ripe ones. A popular combination is to dip slices of green mango into bagoong (fermented shrimp paste) for a shock of sour and salty flavor. Anecdotally, this is a common craving among pregnant Filipino women. One of these was my mother, who used to send my father out for green apples and salt — the closest substitute available in Saudi Arabia, where they were living at the time. 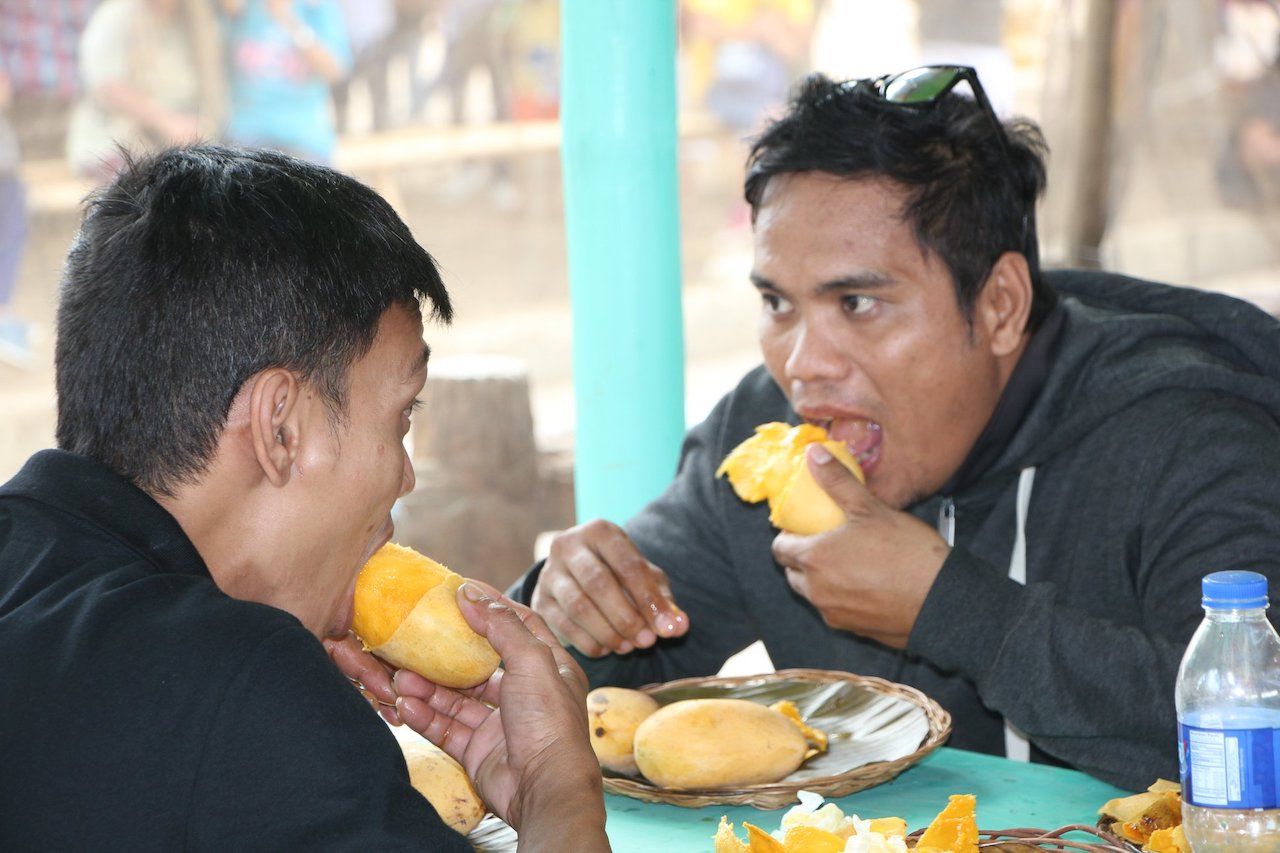 Though every region is fiercely proud of its local mango variety, many admit that the carabao mangoes of Guimaras are the sweetest in the country, and perhaps the world. They’ve been served at the White House and Buckingham Palace, and Russia has a regular order of two tons of Guimaras mangoes a week — a drop in the ocean for a province that produced 11,500 tons last year. In April, agricultural secretary Emmanuel Piñol made a promotional trip to Germany and Belarus and proclaimed, “Our Honorary Consul there got a piece of Guimaras mango from me — he said, ‘I’m not going to taste other mangoes anymore.’”

Guimaras, an island with a population of around 175,000, has more than 250,000 mango trees. Less than 40 percent is used for large-scale commercial production, and a large number of trees are in the hands of independent producers. Growing mango trees is a tricky affair, and farmers must contend with fruit flies, weevils, and tempestuous weather that brings regular typhoons. To combat this, the island opened a nine-hectare National Mango Research and Development Center dedicated to the optimization of mango growing techniques. The island also imposes a strict embargo on outside mango products, even from other Philippine islands. 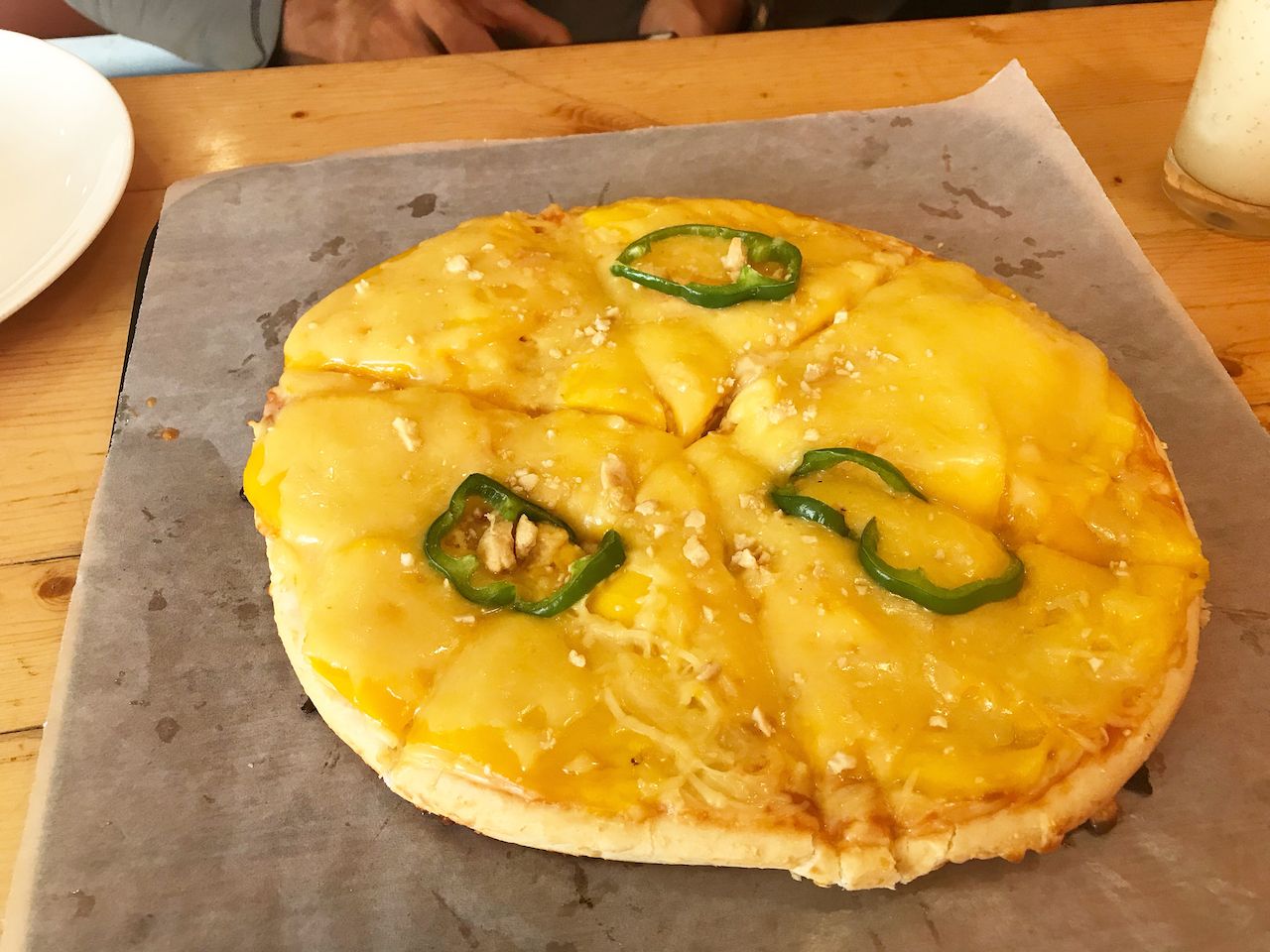 Guimarasnons (the people of Guimaras) have capitalized on mango fever with a broad range of products and events. Mango ketchup has been a big hit, and local restaurant The Pitstop is famous for mango and cashew pizza. The Guimaras Trappist Monastery once sold sticky mango cakes and biscuits to locals, then grew large enough to export them all over the country as the Trappist Monastic Food Products Company. All of the mango excitement peaks at the Manggahan Festival. 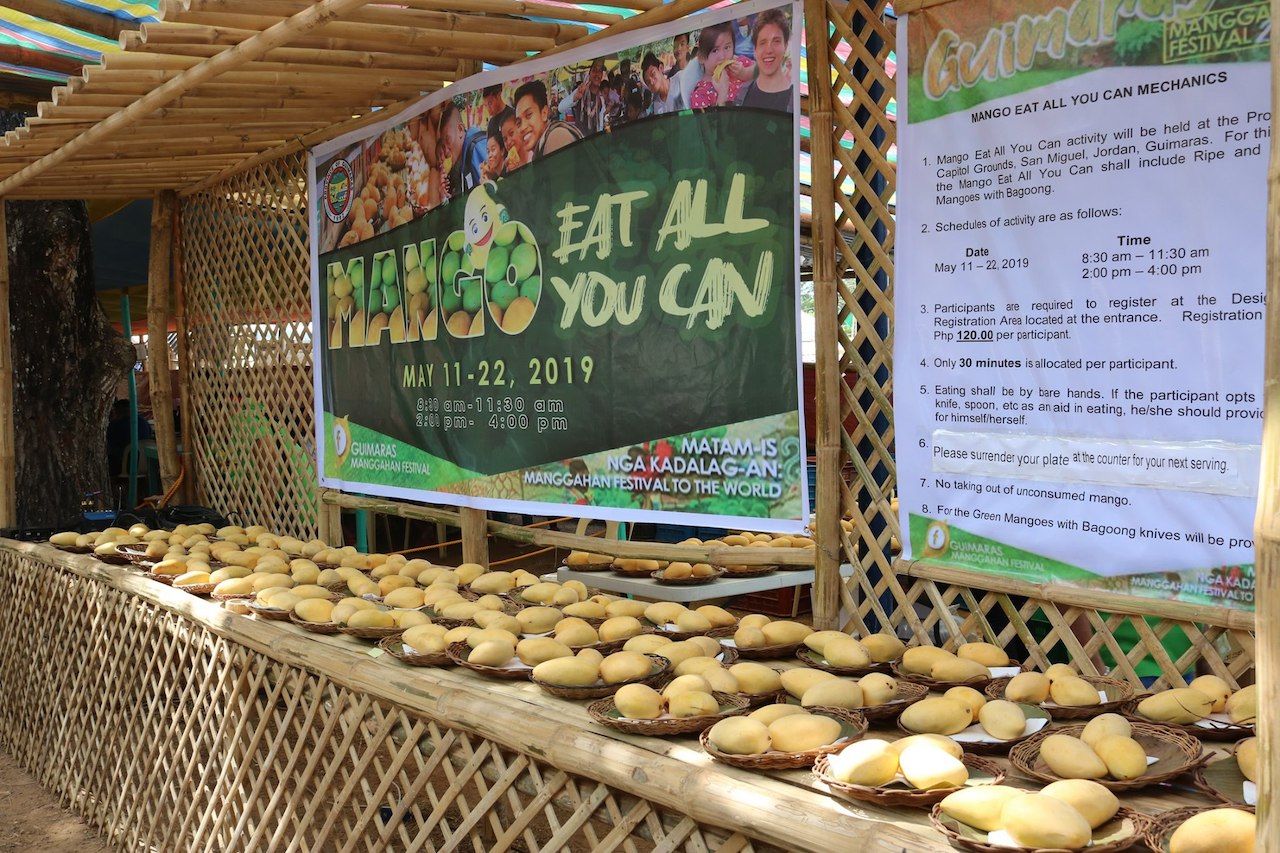 Promotion for Manggahan begins early with warm-up events held in individual municipalities as far back as April. The festival officially launches in the town of San Miguel on May 11, with a 111 kilometer “Tour de Guimaras” bike race. Other events over the following 10 days include a Latin dance competition, a music festival, a pick-your-own mango event, and a male beauty contest (though sadly the “Mr. Guimaras” pageant isn’t specifically mango-themed). An “Eat All You Can” contest is held daily, where participants pay 110 Philippine pesos (around $2) for 30 minutes of unlimited mango eating. Participants can choose between ripe mangoes and green mangoes with bagoong. 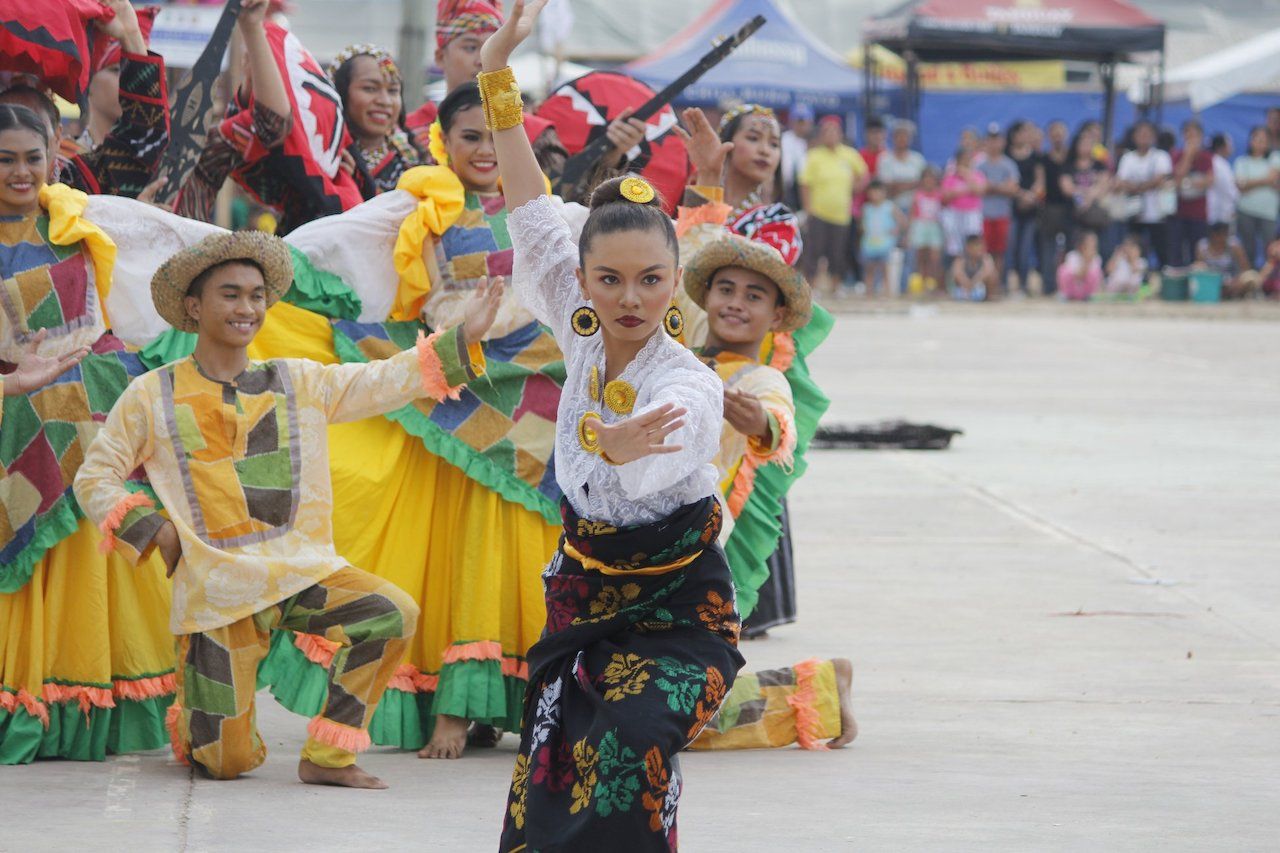 The festival culminates on May 22 with the cultural competition, where “tribes” of high school students don extravagant yellow and green costumes and go head-to-head with music and dance performances. The winners of the competition progress to national festivals in Iloilo and Manila. From there, some go farther afield. In 2018, winning tribe Hubon Mangunguma was sent to New York to take part in Independence Day celebrations. The biggest party, however, is on the island.

At the performance with the gesticulating women, farmers eventually fill their baskets with fruit. They part to let the ladies through, each woman draped with yellow ribbons to look like fresh mango flesh. Front and center a globe emerges with the slogan, “Mangga ng Guimaras: matitikman na sa ibang bansa!” which translates to “Mangoes of Guimaras, tasted all over the world!”

Food + Drink11 Filipino Foods You Need To Add To Your Eating Bucket List
Tagged
Festivals Food + Drink Vegetarian Philippines
What did you think of this story?
Meh
Good
Awesome