Filipino cuisine is a true melting pot of flavors, and each dish is a time capsule influenced by neighboring countries and cultural occupation. Traditional Filipino food has gained high praise from famous chefs and influenced younger generations to commercially create family recipes in food trucks, pop-ups, and restaurants in big cities around the world. It’d be a monumental task to go through all of the country’s ever-changing gastronomy, but if you’re looking for where to start, these 11 dishes should be on your must-try list. Kain tayo, or for the non-Tagalog speaker, “Let’s eat!” 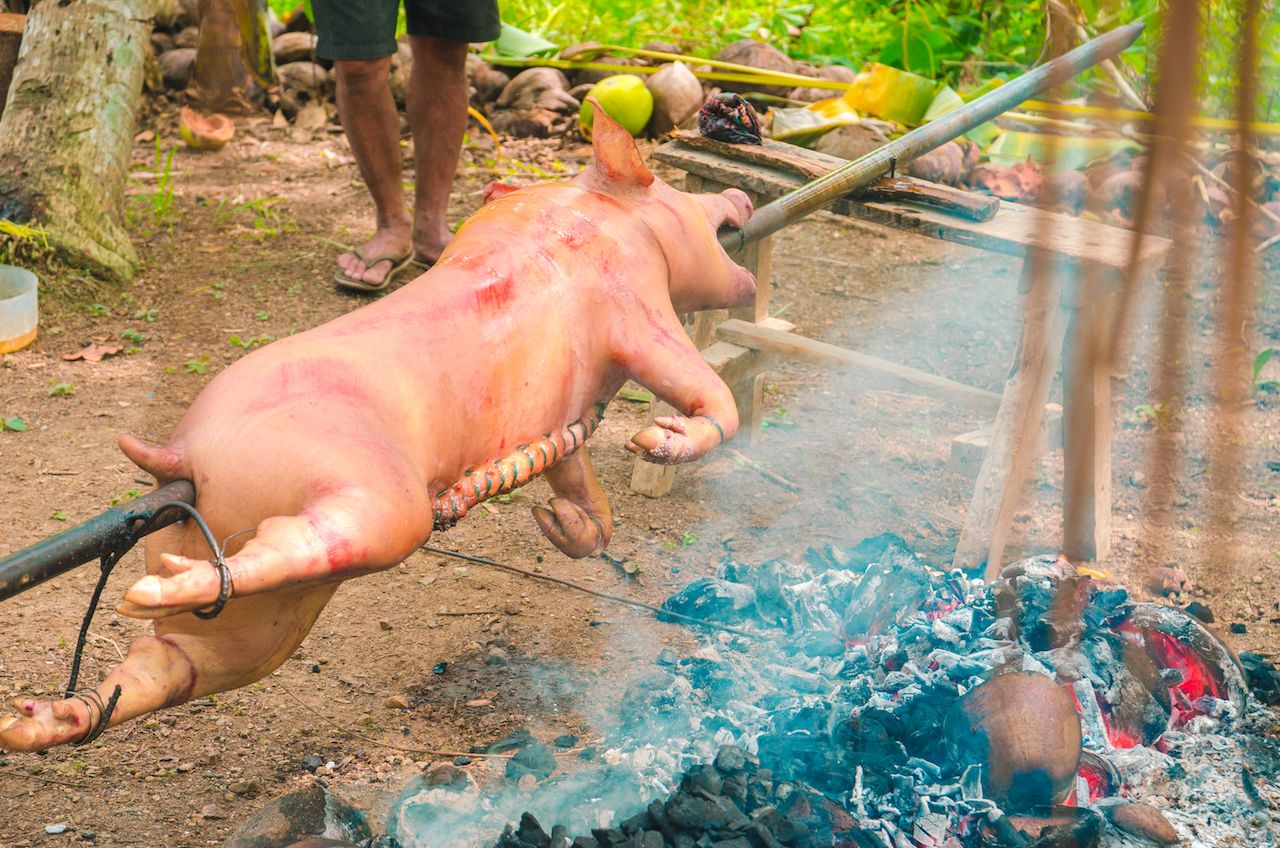 Spain ruled over the Philippines for 333 years, and one of its biggest lasting culinary influences to the country was suckling pig, or lechón. In many countries with Spanish influence, such as Puerto Rico, few major celebrations are complete without a lechón. Depending on the size of the pig, lechón takes anywhere between five to 12 hours to prep and cook. Though it may seem counterintuitive to wait so long for a meal, the results are worth the wait. Lechón is hot and crispy on the outside, flavorful and tender on the inside. The island of Cebu, where my father’s family hails from, is known for having the best lechón of all the Philippine islands. Don’t want to take my word for it? Perhaps the declaration of, “Best pig ever!” from the late, great Anthony Bourdain may convince you. 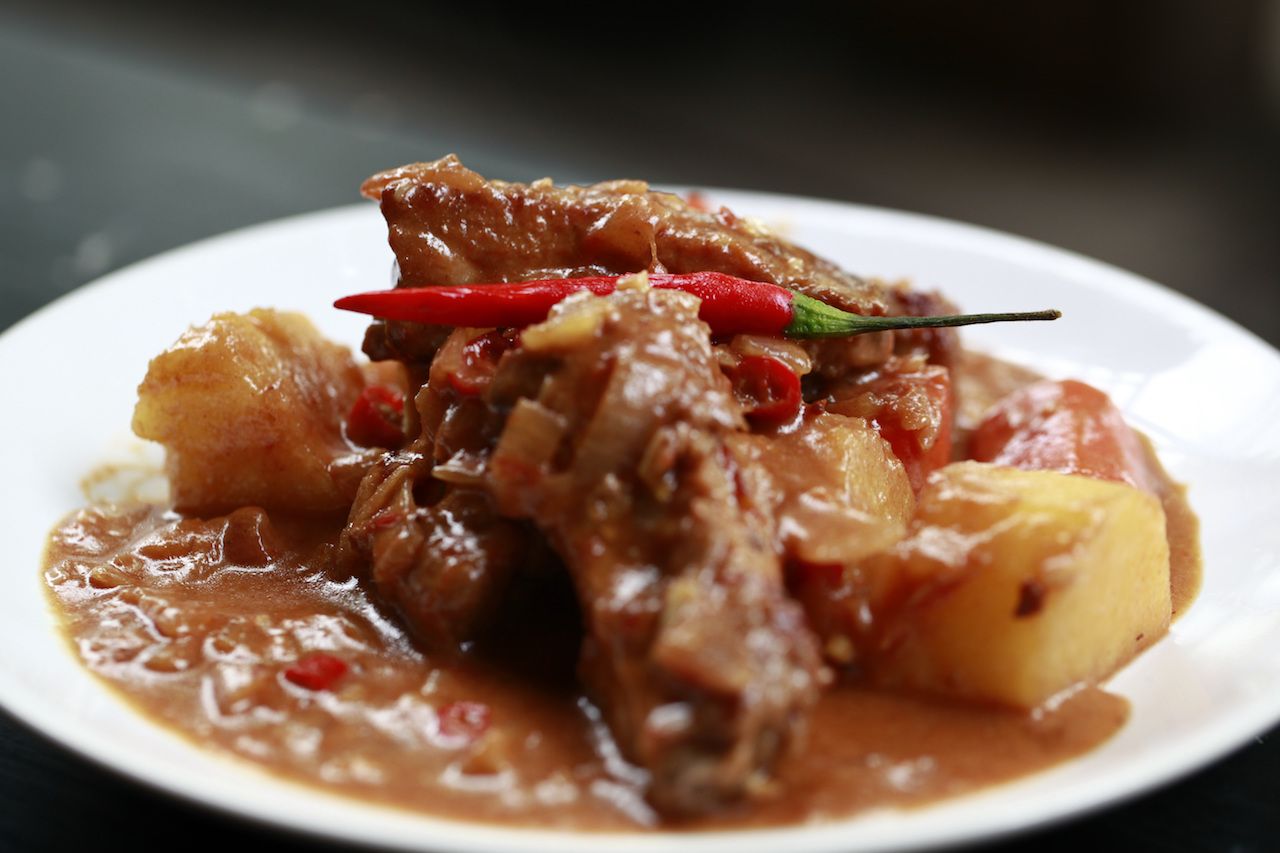 Adobo is sweet, sour, and salty all at once. The Filipino comfort food is made with chicken, pork, or fish that’s braised in vinegar and soy sauce then seasoned with garlic, peppercorn, and bay leaves. The result is a pungent, bold-flavored dish with hints of umami. Serve with rice (a staple) and the extra sauce. You can’t go wrong with Adobo. 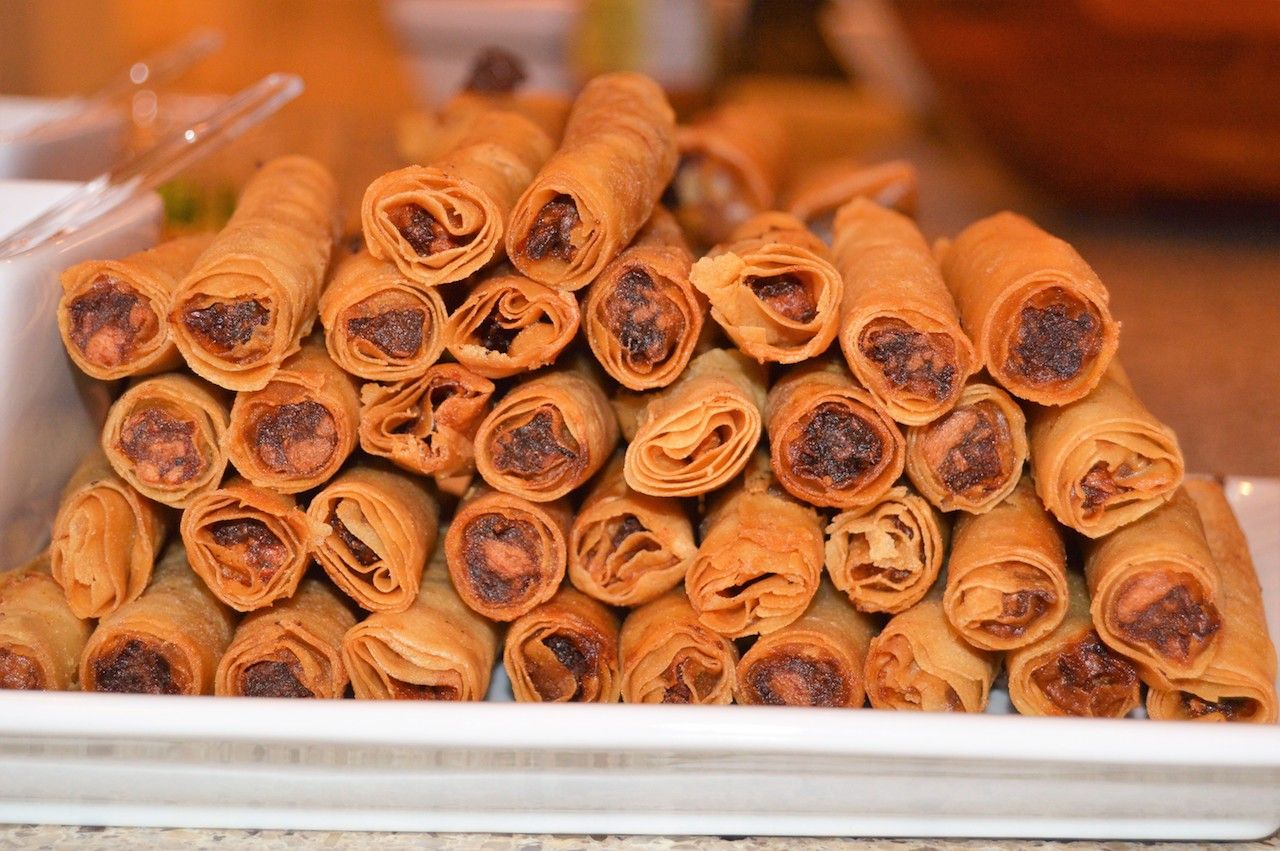 An adaptation of the Chinese egg roll, deep-fried lumpia is a favorite menu item in the Philippines. It’s similar to egg rolls in shape and filling but lacks egg. Rice paper, or a wheat flour and cornstarch mix, encase traditional lumpia fillings. Savory versions are filled with meat and vegetables and served with a sweet dipping sauce while a dessert version, a banana lumpia called Turon, is made with sliced banana and dusted with sugar or caramel sauce. 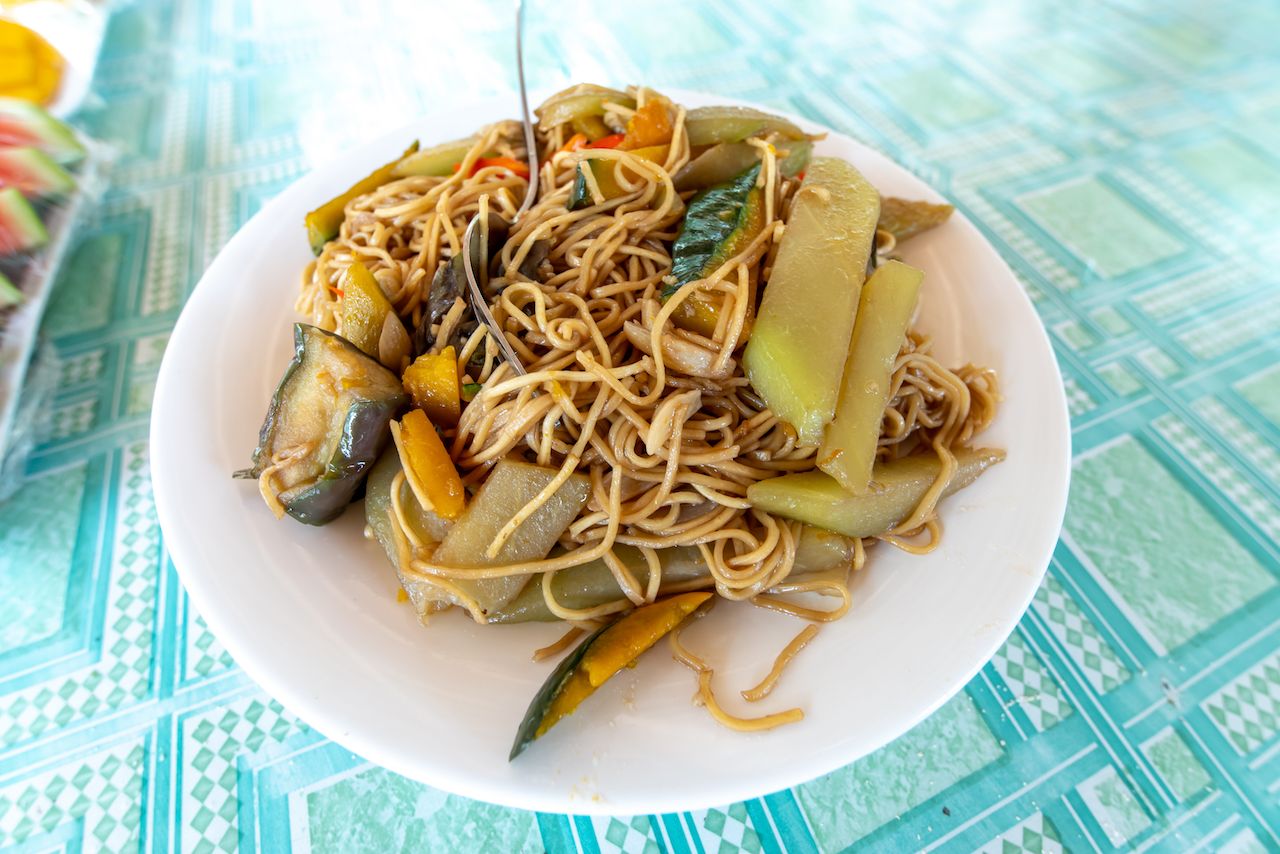 Pancit, or noodles, were adopted into local cuisine and come from the influence of Chinese Filipino settlers. Over the centuries, pancit varieties have multiplied. Two styles you don’t want to miss are pancit bihon (made with thin rice noodles, soy sauce, chicken, pork, and vegetables) and the heartier pancit palabok (shrimp, shrimp gravy, and crushed pork chicharon topped with egg). 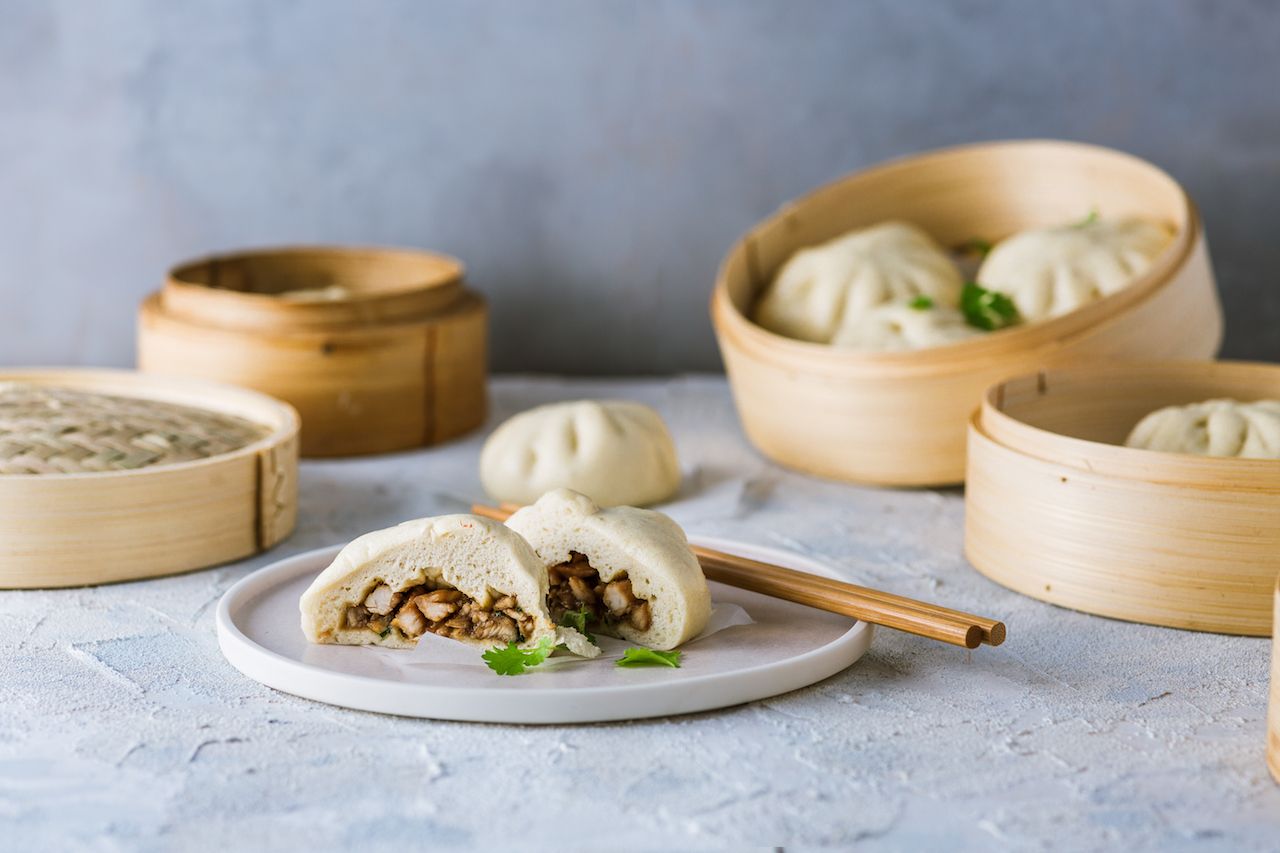 Translated to “hot bun,” siopao is the Filipino version of Chinese steamed buns. A beloved snack staple, siopao is traditionally filled with meat, vegetables, and a hard-boiled egg. 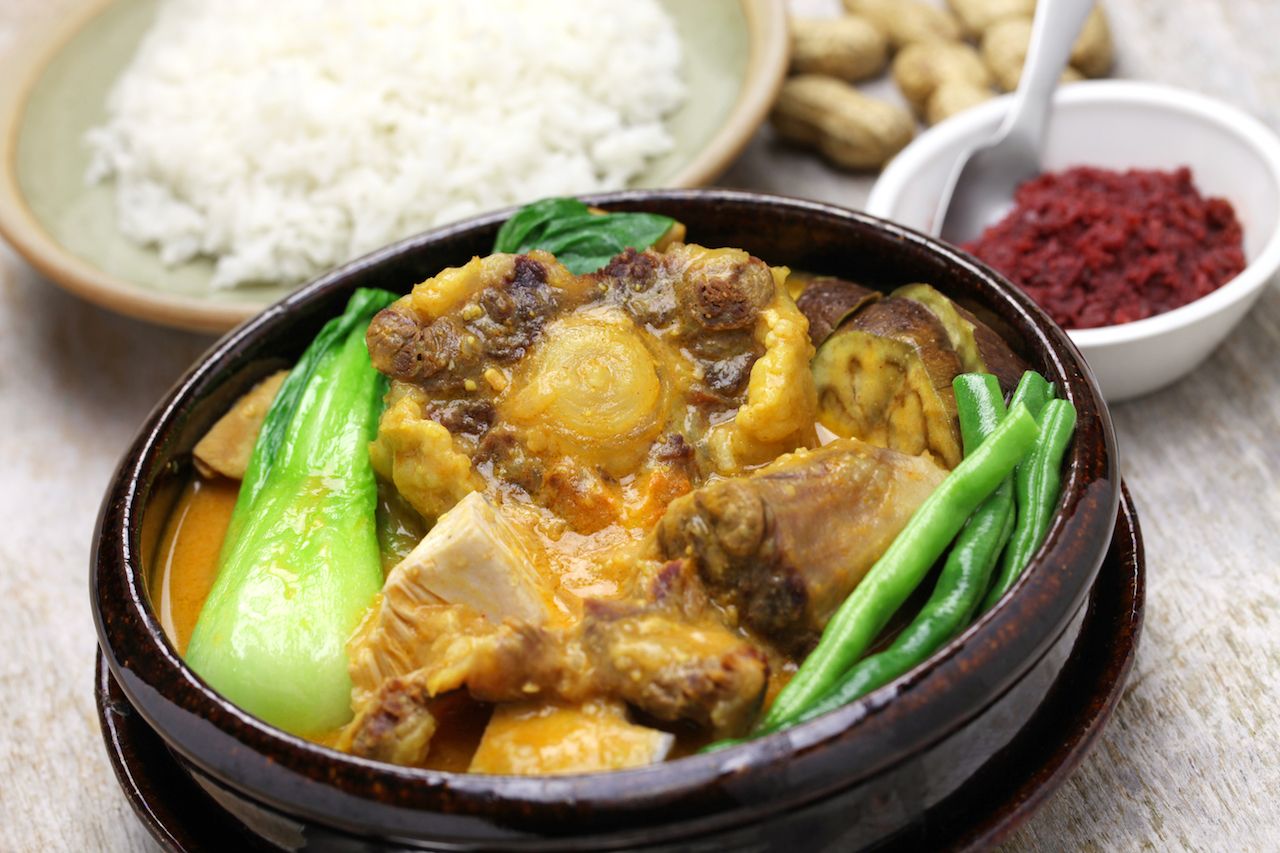 A Filipino stew made in a thick peanut sauce, kare-kare is a favorite dish for special occasions. It’s traditionally made with oxtail, but there are also versions made with pork hocks or beef stew cuts. The meat of choice simmers for hours to achieve the desired tenderness. Later in the cooking process, banana blossoms, string beans, and eggplant are added. 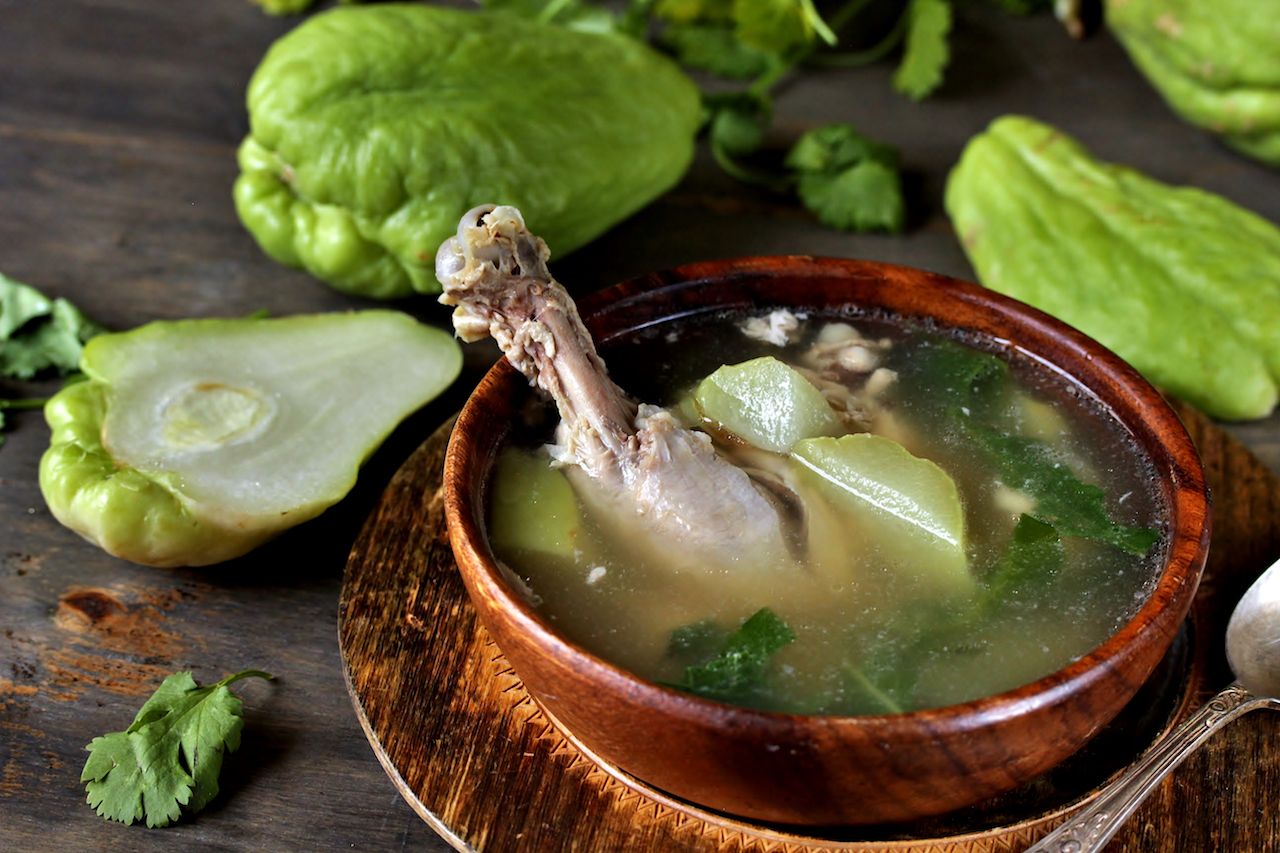 Tinola is perhaps the closest thing to chicken noodle soup in Filipino cuisine. The base is a nutritious broth flavored with ginger, onions, and fish sauce. The heartier elements include tender chicken, unripened papaya, and siling labuyo chili pepper leaves. This soup is excellent on a winter day or when recovering from a bad cold. 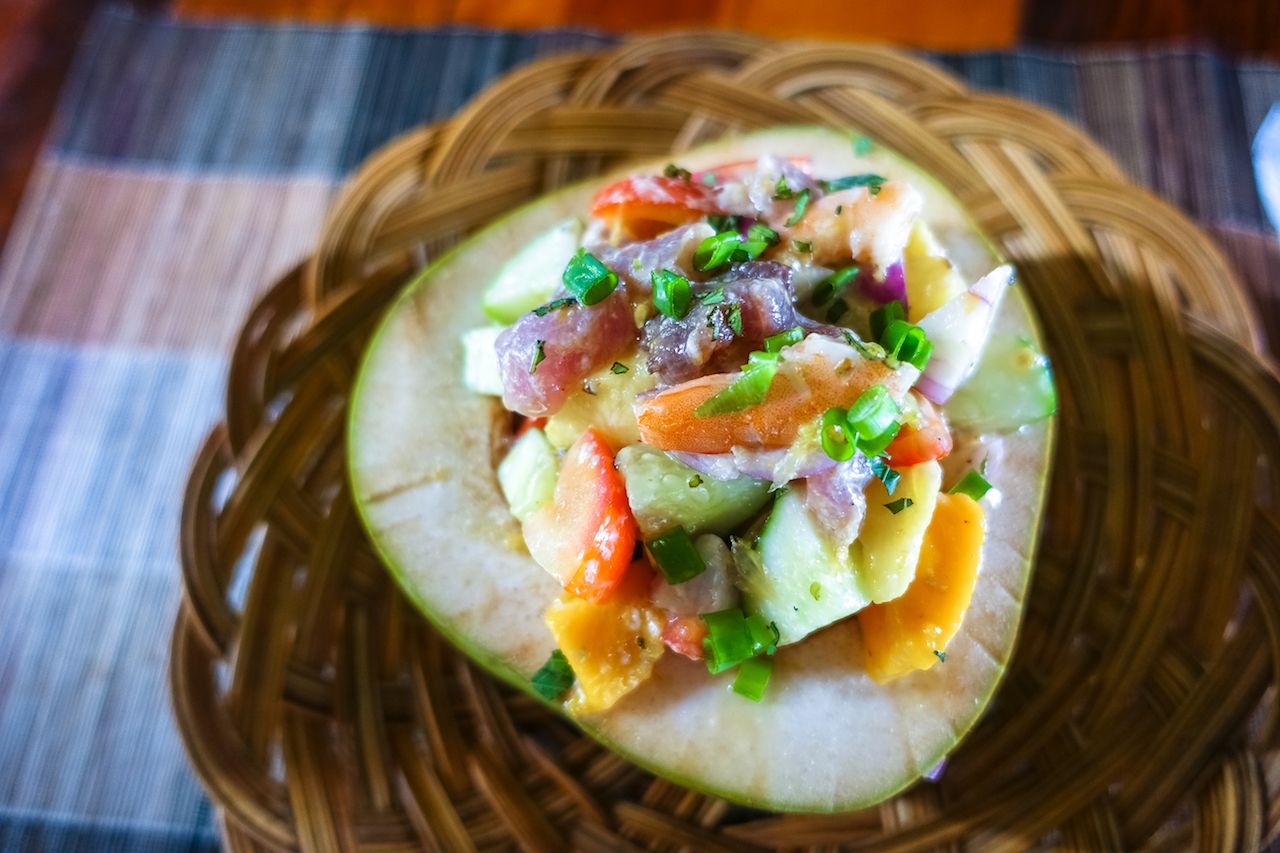 Translated to “eaten raw,” kinilaw is the Filipino version of ceviche. While other countries use lime juice as the acid, Filipinos use vinegar. The most common kinilaw dish is kinilaw na isda, or fish kinilaw. It’s prepared by cubing fish like Spanish mackerel, tuna, or wahoo and mixing with vinegar along with a souring agent like calamansi or tamarind. The dish is flavored with black pepper, onions, and chili peppers. Kinilaw is best eaten on a hot day as an appetizer with a cold beverage. 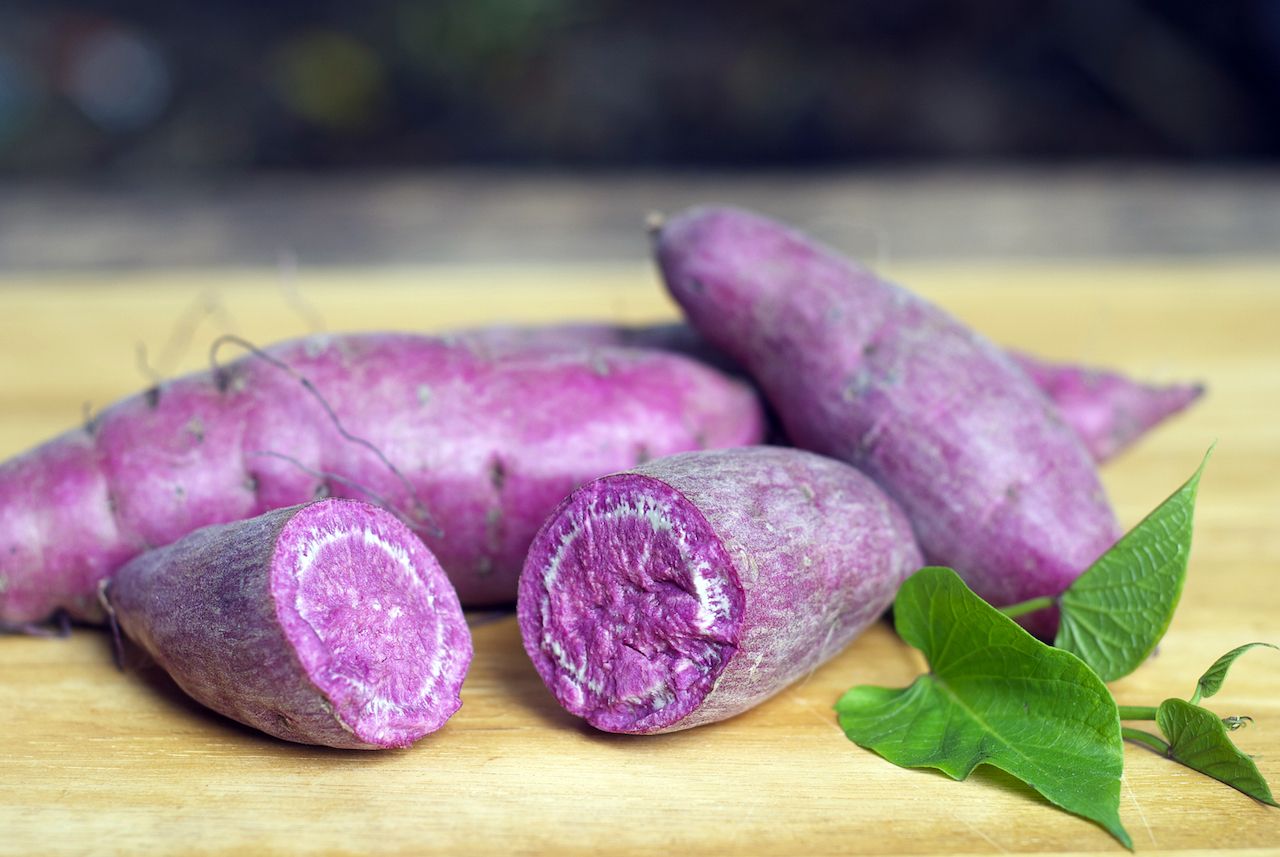 This popular purple yam took social media by storm in 2017. From cocktails to pastries, food lovers could not stop taking photos of these violet-hued creations, yet it’s long been a staple in the Philippines. Dioscorea alata, the plant’s scientific name, is an indigenous plant to Asia but specifically grown in the Philippines. Generally used for sweet recipes, ube halaya (jam) and ube ice cream are the most common ube treats. 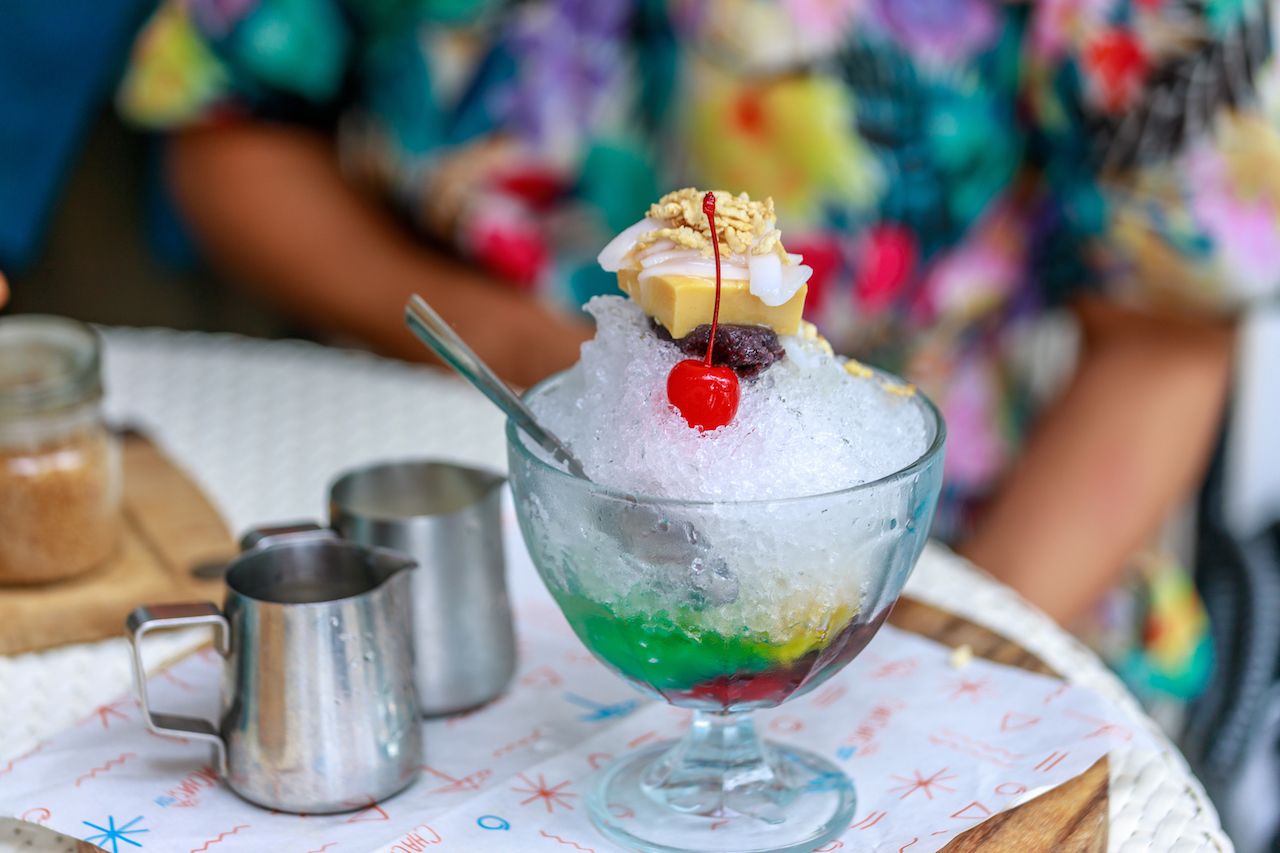 Staying on the ube train, Halo-Halo, which translates to “mix-mix,” is a favorite Filipino dessert. The concoction is a mix of evaporated milk, crushed ice, ube, leche flan, sweet beans, and fruits topped with a scoop of ube ice cream. 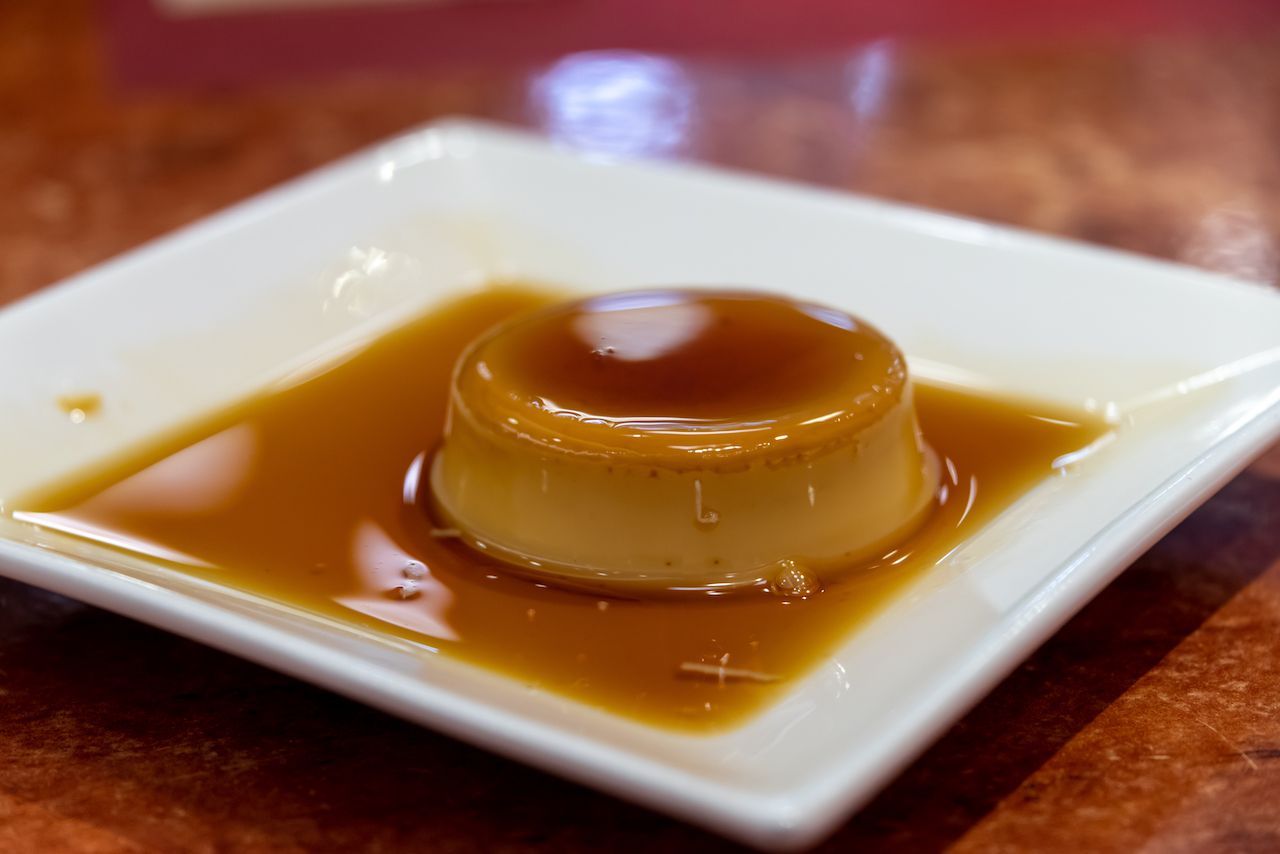 The leche flan is a type of creme caramel, or Spanish flan. It’s steamed, not baked, creating a light, yet creamy, texture in this cherished dessert. It’s made with milk, both evaporated and sweetened condensed, and egg yolks. The whole thing is finished off by marrying the custard with caramelized sugar. Leche flan is an occasional topping of previously mentioned Halo-Halo, but the best way to enjoy this sweet treat is by itself.

The Philippines is rediscovering its heritage coffee. Caffeine lovers everywhere should take note.

Kalanggaman Island is one of the best getaways in the Philippines

This Philippine island has mangoes so delicious, they have their own festival