When people visit Manhattan, so much emphasis is often put on visiting the charming, stylish streets of Greenwich Village, the flashy lights of Times Square, or the majestic foliage in Central Park. There are so many things to do in New York City that’s it’s easy to see why an overwhelmed traveler would resort to the known classics. But Manhattan’s position on the banks of the Hudson and East rivers also make it one of the best places in the country to enjoy a day out on the water. And if you’re going to do so, it should be from the South Street Seaport neighborhood with boat tour company Manhattan by Sail.

South Street Seaport is located in lower Manhattan near the Financial District. It’s an official historic district, so in addition to fresh sea breezes and views of the New York City skyline, this is a place to dig into the city’s rich history. 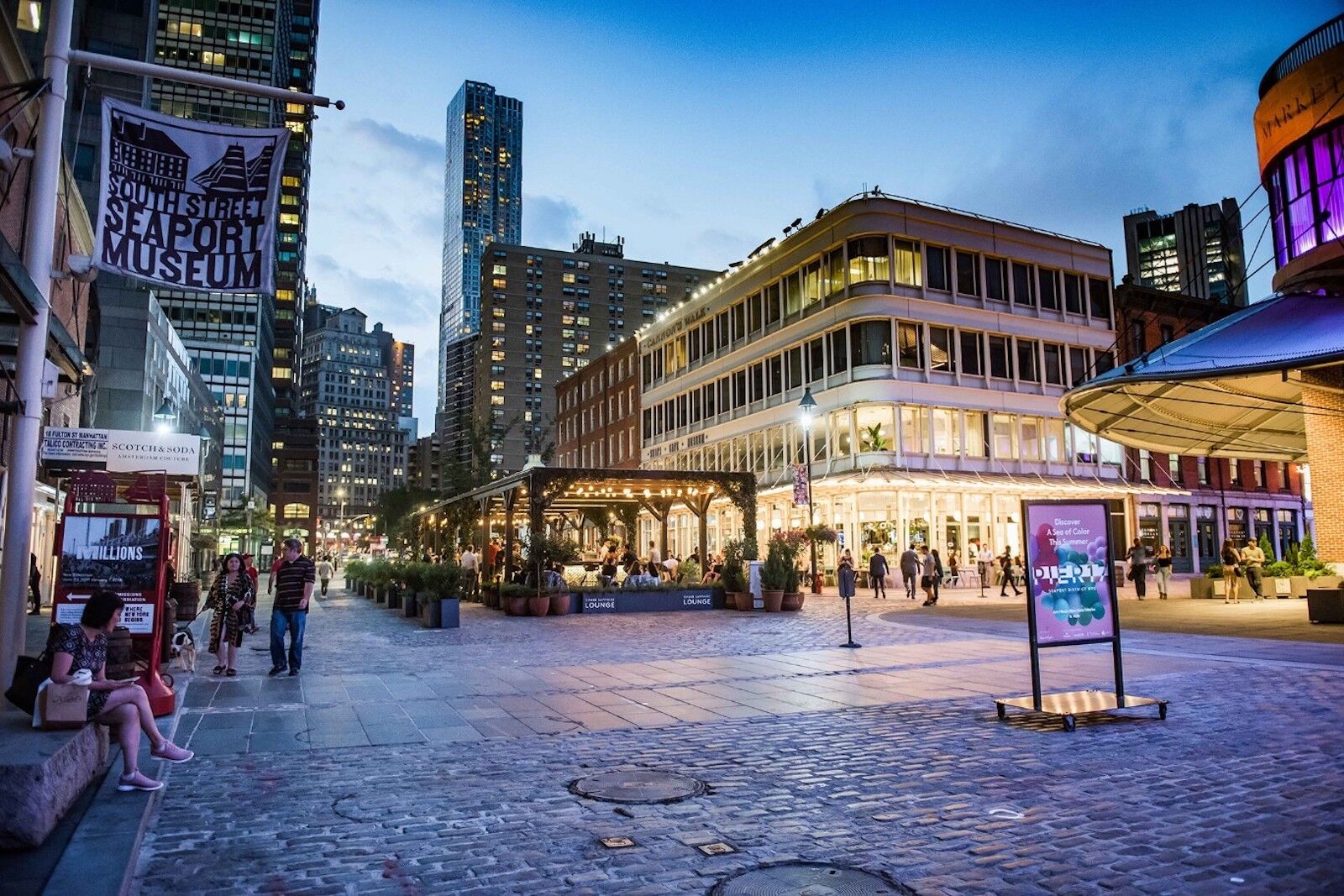 The port was originally established in 1625 by the Dutch, and over the years saw the arrival of commercial goods, brothels, and the famous Fulton Fish Market. The port reached its peak in the mid-1800s, but by the 1950s, most of the piers had been abandoned.

Today, the old Fulton Fish Market has been rebranded as a food hall called the Tin Building curated by ​​Jean-Georges Vongerichten (the fish market has been reincarnated in the Bronx). Restored 19th century buildings make up most of the neighborhood’s architecture, and all those ships you see in the port as soon as you arrive? Those are almost all original 19th-century sailing ships, restored to working order.

There are opportunities to explore those magnificent ships, but before hopping on a boat tour, your first stop should be the South Street Seaport Museum. The museum offers free tours of the Wavertree, a sailing ship built in 1885 that is now permanently moored at Pier 16. The museum is also home to a 19th-century-style print shop, chartered rides on a tugboat from 1930, and hands-on activities where kids can learn how sailors lived in the 19th century. 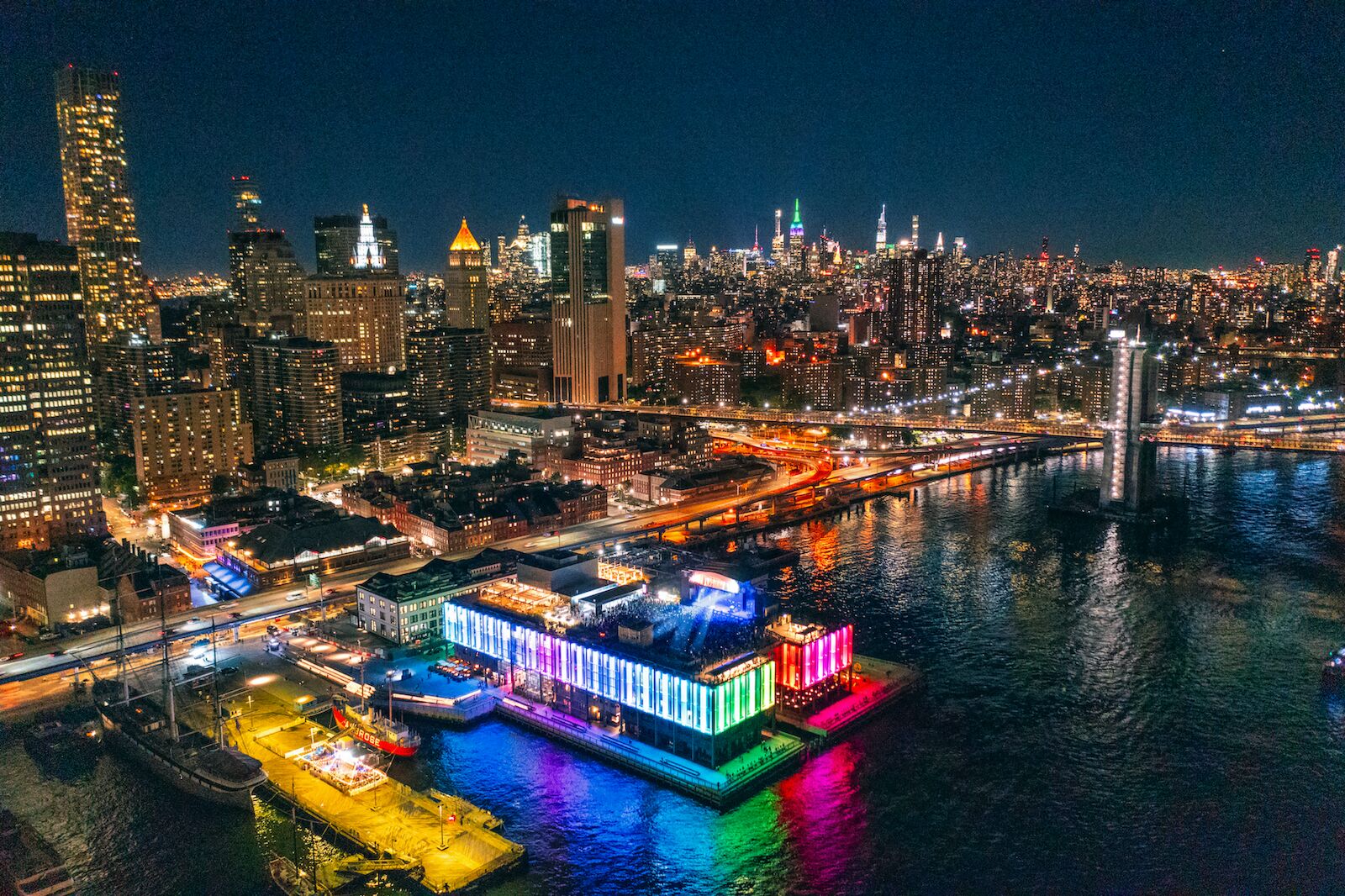 After the museum, it’s high time to get on the water. That’s where Manhattan by Sail comes in. The company offers tours on two boats: the Clipper City, a replica of the type of lumber hauling schooner popular in the port 100 years ago, and the Shearwater, an original schooner built in 1929 that’s considered one of the city’s “floating landmarks.”

The Clipper City cruise invites guests to enjoy stunning views of downtown New York City and sails right by the Statue of Liberty, which is magnificent up close and well worth seeing even if it feels cliche. You can book a sunset wine and jazz cruise, a craft beer tasting, or a fireworks viewing in the summer. There’s also a late night burlesque show cruise.

But the classic, all-ages, two-hour cruise is a fit for every type of traveler. Families, couples, and even people flying solo for the day will enjoy the fresh air and calm seas – plus it’s only $78 for adults. There are shorter boat rides in New York City that are less expensive, like the Water Taxi, but that has much more a ferry-like atmosphere. The Clipper City is an open air sailboat. It’s a much more sophisticated experience.

The cruise is also a good way to get outdoors and enjoy nature without actually having to do any walking or moving at all. That’s a blessing in New York City, where most of the activities involve walking from place to place.The boat has a full bar, too, so you can find your seat, sit back, and enjoy the low key sail. There isn’t a tour guide talking over a loud intercom about the history of New York City (although a crew member might ask a couple brave volunteers to help with the sails), so it’s more about enjoying your time on the water than trying to take in a history lesson.

Once you get to Ellis Island, the ship will linger so that you can take some pictures and absorb the view. The sun filtered through the clouds as it shines down on the Statue of Liberty is especially stunning. However, I think what is really enjoyable about this cruise is that it allows an activity usually reserved for the wealthy – sailing in the New York City harbor – and makes it accessible and fun for everyone.

CruisesThis Windjammer Cruise Along the Coast of Maine Is the Most New England Experience Ever
Tagged
Insider Guides New York, NY, United States
What did you think of this story?
Meh
Good
Awesome