The rock archway spanning El Portal Road outside Yosemite Valley is not much to look at next to Half Dome or El Capitan, but as one of five official entry points to Yosemite National Park, the granite welcome banner has become something of a landmark in its own right.

Four of the park’s entrances draw a line down its western edge while the lone Tioga Pass occupies the eastern side. Each offers a distinct first impression of the valley, as well as access to different amenities and attractions. Tioga Pass is closest to neighboring Nevada, passing the Mammoth Lakes on the drive. Hetch Hetchy is the farthest north on the west side and the most remote, while the South Entrance caters to those coming from Southern California. In between, the Big Oak Flat and Arch Rock entrances funnel traffic from the Bay Area.

Of the five, the Arch Rock Entrance is closest to Yosemite Valley, about 25 minutes from the park’s visitors center. In the other direction, it opens to the historic heart of Mariposa County. To turn your Yosemite trip into a Northern California adventure, plan your park visit around the Arch Rock Entrance — even if you’re coming from Las Vegas or Los Angeles.

A gateway town that doesn’t pander to tourists 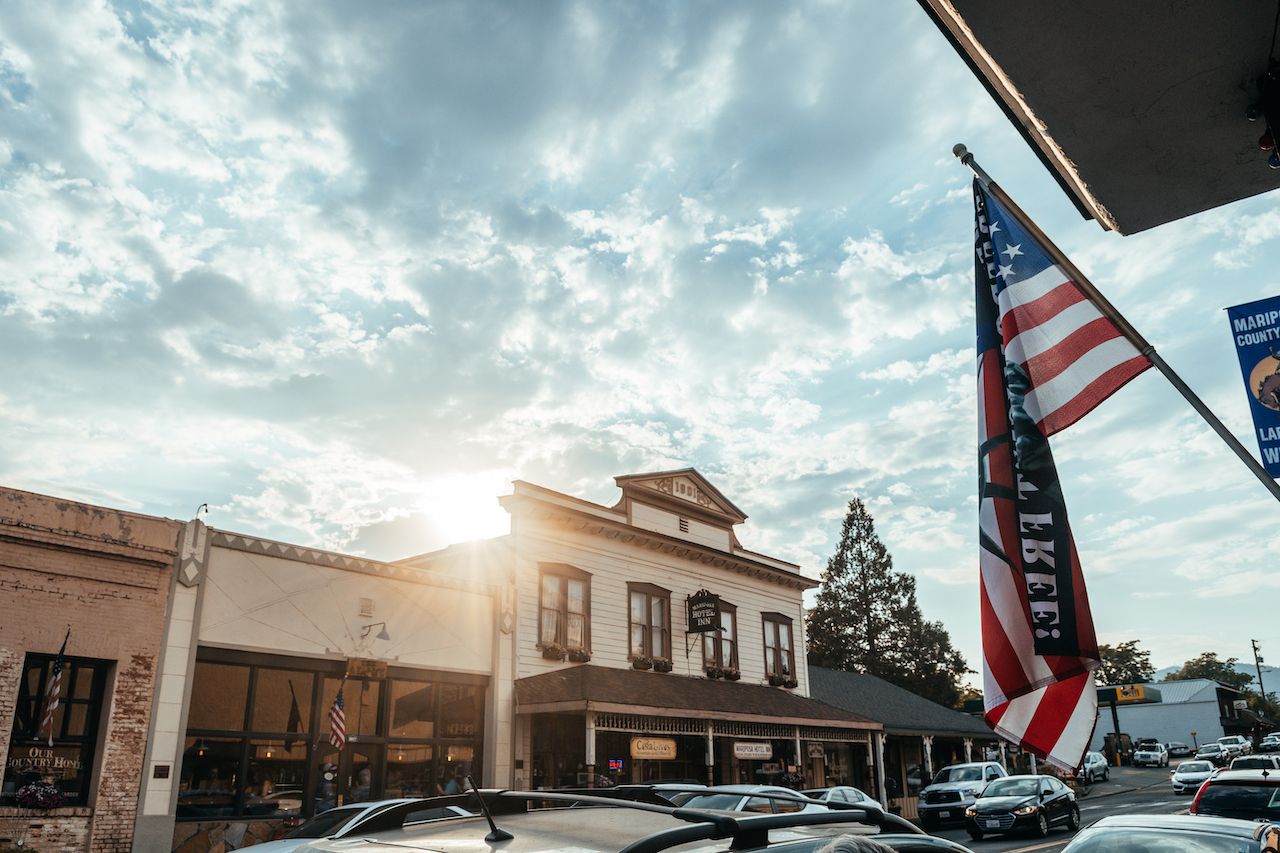 El Portal sits on Yosemite’s doorstep, but the town of Mariposa roughly 45 minutes from the Arch Rock Entrance is better known as a gateway to the park. Though larger than El Portal, Mariposa hardly seems bigger than its main street, which, for a correspondingly small town center, has a surprising number of shops, eateries, and attractions.

While its proximity to the park is a defining characteristic, Mariposa secured its place in history as a Gold Rush boomtown. A museum off one end of the main street chronicles the town’s heritage through letters, documents, and artifacts, some of which have been made into lifesize displays of what a schoolhouse, saloon, or general store pantry might have looked like. Out back are two large mills once used to crush quartz and extract gold.

The museum feels personal because it is. Its contents were all donated, as was the land on which it was built, and volunteers donate their time to keep it going.

Mariposa, in general, is like this. Local businesses support one another, everyone seems to know each other, and passersthrough are treated more like neighbors than tourists. Neither a Gold Rush gimmick nor a town that revolves around Yosemite, Mariposa packages its amenities into a community beaming with small-town charm, plus perks like a lively arts scene, more craft beer than you’d expect, and annual events like the Butterfly Festival and Mariposa County Fair that’d make fun additions to any Yosemite itinerary.

Glamping for people who make fun of glamping 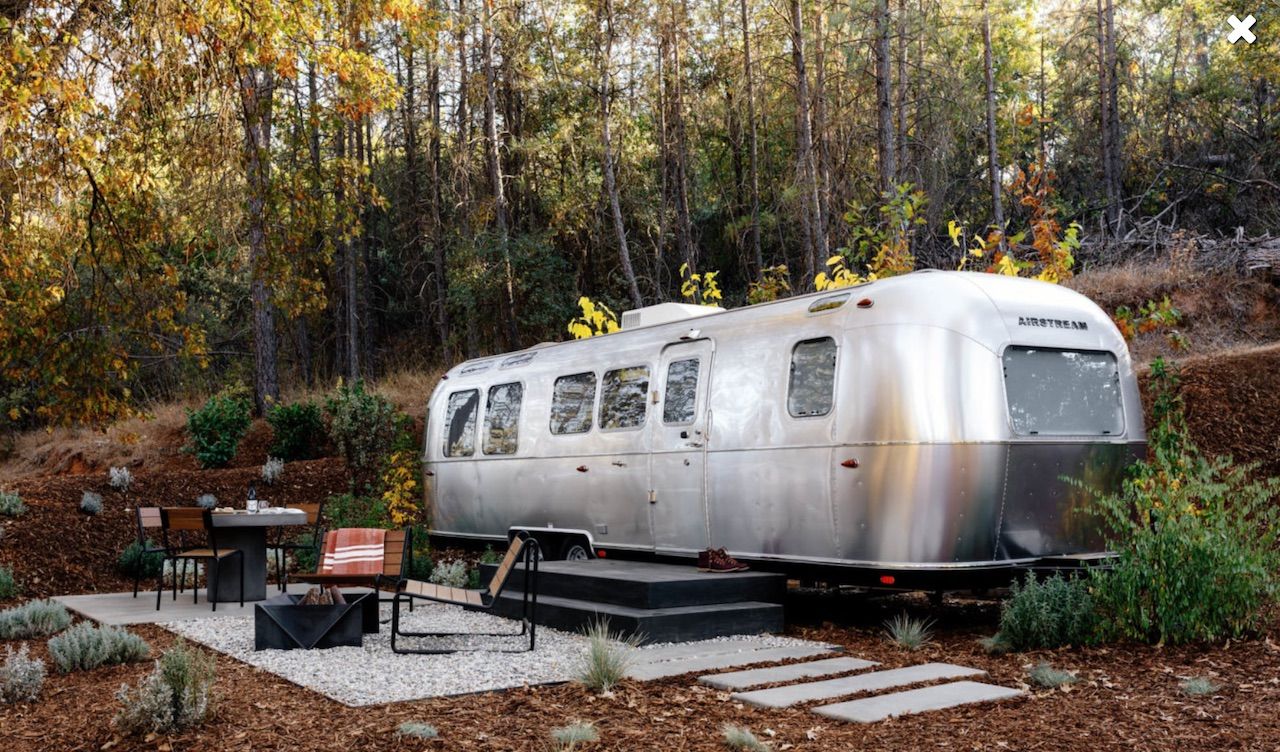 It’s hard to complain about a hot shower, a nice meal, and comfortable bedding after a long day outdoors, but call it glamping, and some will find a way. Park purists may insist on sleeping in the backcountry, or maybe at the campground, but about 35 minutes from Yosemite’s Arch Rock Entrance is an alternative that could have even the most stubborn John Muir disciples reconsidering: overnighting in a sustainable, decked out Airstream.

A few bends in the road past Mariposa is the even smaller town of Midpines, which, were it not for its very own post office, might not be considered a town at all. Here, tucked away off the highway, visitors can make their Yosemite trips unforgettable at AutoCamp. Neither too precious for the wilderness fluent nor too rustic for the nature illiterate, the effortlessly cool glampsite specializes in exclusively designed Aistreams, though there are also luxury tents, six-person cabins, and handicap-accessible units on site. All come with a private patio and grill and are positioned around the mid-century modern clubhouse.

“For us, it’s about connecting people to the outdoors and each other,” says Robert Smit, the regional vice president of AutoCamp.

Honoring its word, the property makes accessing Yosemite easy with daily YARTS shuttles to the park, as well as exclusive pricing with REI Day Tours. Back at camp, when they’re feeling social, guests can play giant lawn games, swim in the heated pool, or sit by the campfire overlooking the pond. When they’re not, they can wander nearby walking trails, sign out a complimentary mountain bike, or stock up on wine and artisan snacks at the on-site store and retreat back to their personal fire pits.

The case for Mariposa’s après hike 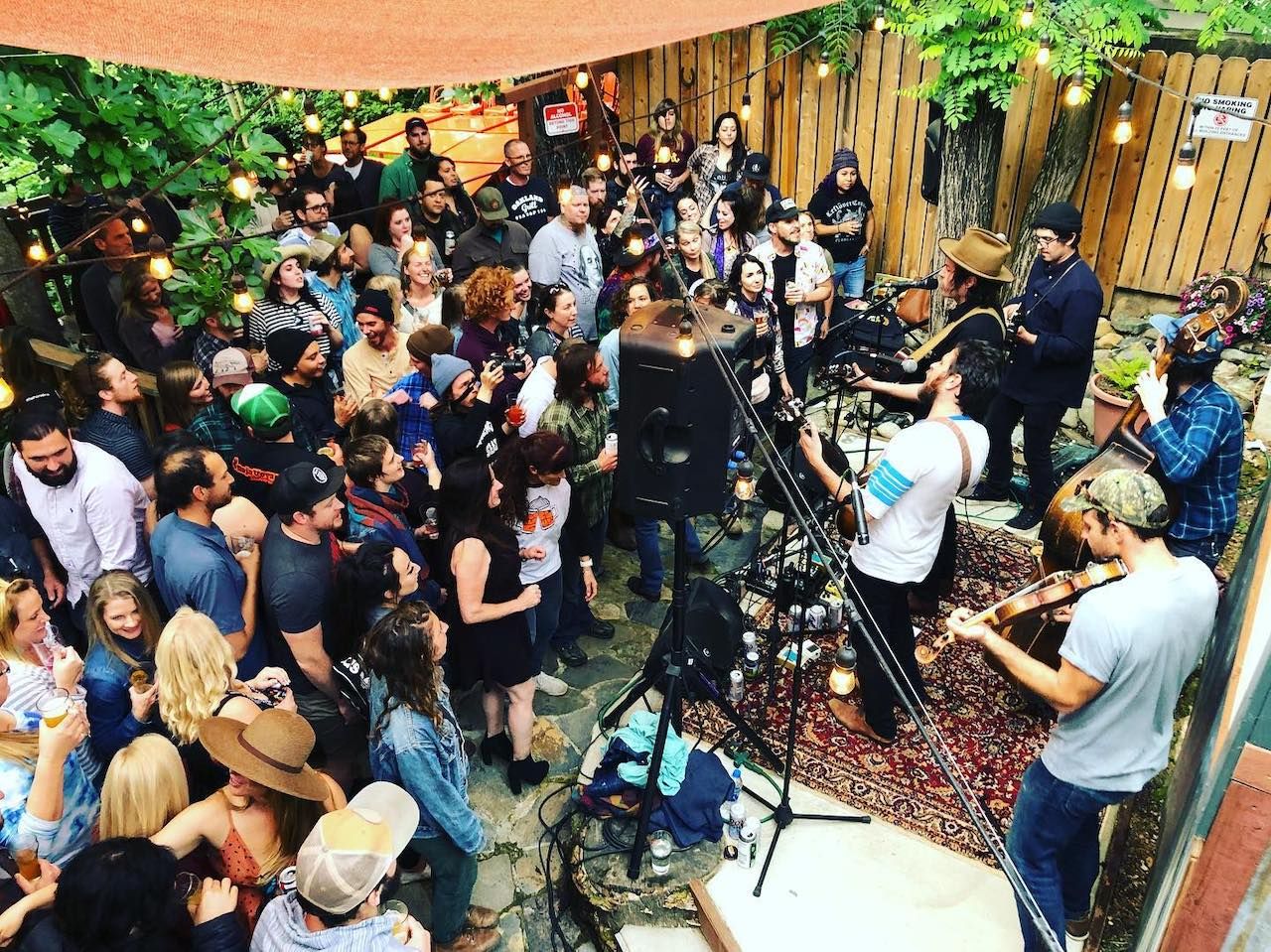 As well as connecting guests to nature and their fellow campers, AutoCamp also nurtures its connection to Mariposa, from getting its baked goods from the Sugar Pine Bakery to hosting local musicians for live concerts some weekends.

Never is this relationship more apparent than peak season, Smit explains. “During summer, we’ll have anywhere between 250 and 350 people on site here, which for the local bars and restaurants is highly impactful, and they appreciate it.”

Drop a couple hundred post-hike glampers outside a town with a few fun watering holes, and you have the makings of a solid après scene. You won’t find the sort of nightlife skiers sometimes seek after zipping down the slopes all day, but Mariposa is a pleasant place to knock back a couple cold ones after a long hike, until about 10:00 PM.

On the main drag, hungry beer lovers can hit up the 1850 Restaurant and Brewery for a War Paint IPA and what’s been called the best burger in the county or pizza-and-beer joint The Alley for a pie of the day and their choice of 16 beers on tap. After grilling up dinner at camp, glampers can also stop by The Grove House, a laid-back haven for craft brews, board games, and live music, or see who’s playing at the Gold Coin Sports Tavern.

Wine drinkers are in good hands at The Grove House and The Alley, as well. But to sample award-winning wine grown just 15 minutes from downtown, consider following up a half day in the park with a trip to the Casto Oaks tasting room on the main street.

Get different perspectives on the landscape 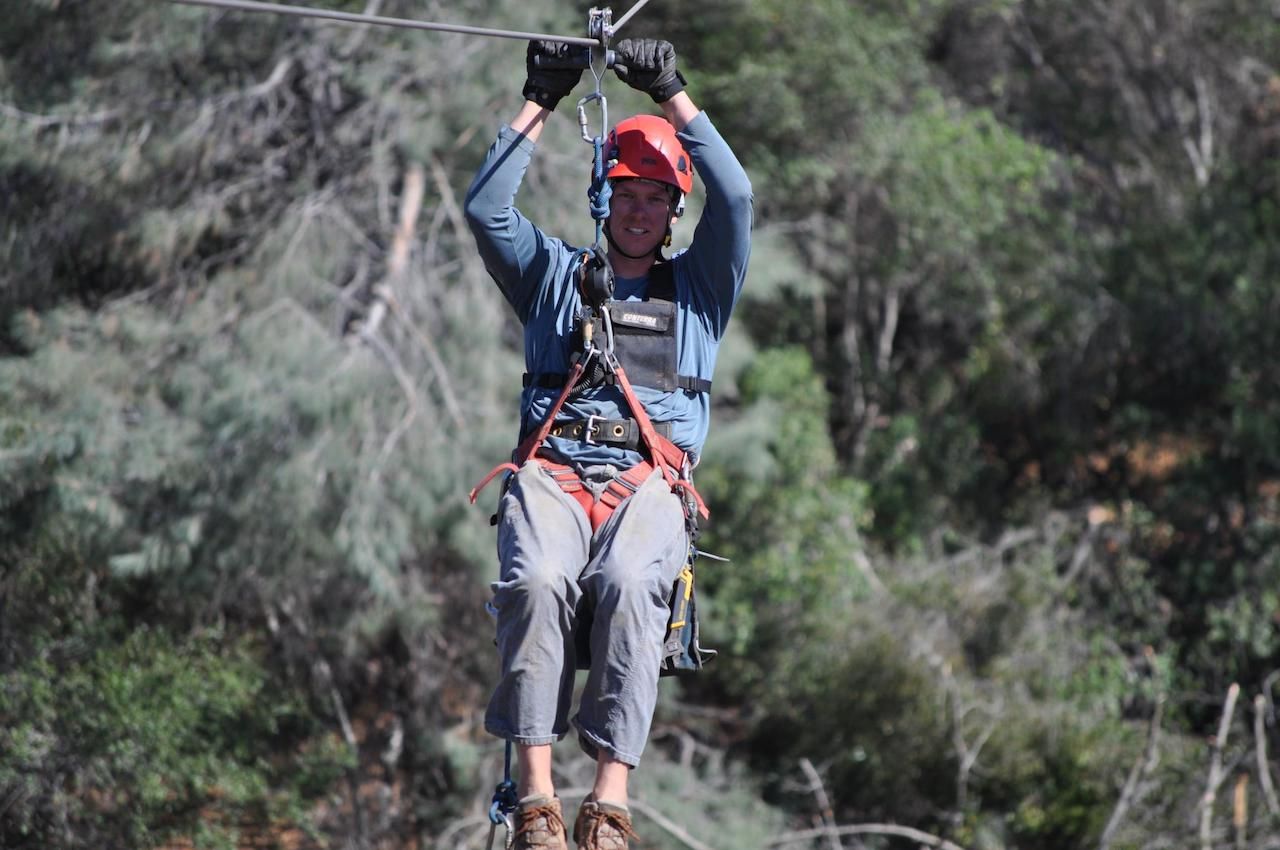 The higher you get in Yosemite Valley, the better the views. Normally that means breaking a sweat for the scenery, but at Yosemite Ziplines and Adventure Ranch, you can get panoramic views of the Buzzard Ridge area without doing any of the legwork. Zip liners will work their way through a two-hour, six-part adventure that starts with a short, gentle ride down Line 1 and ends with a longer, steeper ride through a tunnel and the surrounding trees on Line 7. In between, expect to race a fellow zip liner, aim a bean bag at a target from above, and more. Parties of 10 or more can also book time on a ropes course.

Those looking to make their family trip to Yosemite more educational can take their kids gold panning or gem sluicing to learn more about the area’s natural makeup, as well as its human history. Demonstrations or activities are possible at both Yosemite Ziplines and Adventure Ranch and the Mariposa Museum and History Center. Afterward, visit the California State Mining and Mineral Museum on the other end of Mariposa’s main street with a newfound appreciation for its 13,000-plus artifact collection, which includes rare crystallized gold and various gemstones.

Take your time driving there and back 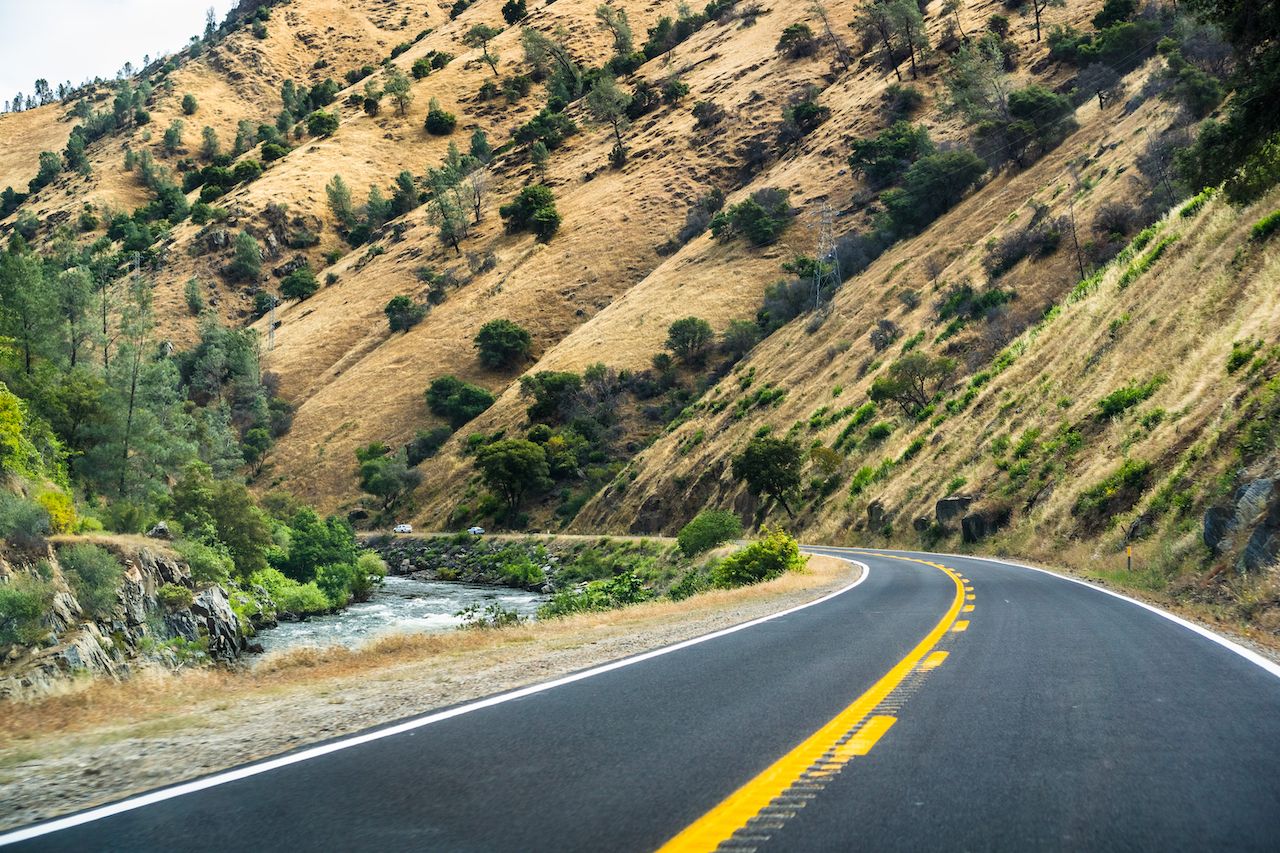 There’s more to Mariposa County than Yosemite and Mariposa town, most of it easily accessible from Highway 140. Designate time for exploring tiny Sierra Nevada towns like Coulterville, a California Historical Landmark, and Bootjack for the views. In Catheys Valley, about eight miles southwest of Mariposa, tour the Epic Alpacas ranch for a quick cuddle with a few of the world’s cutest camelids. Then, fill up on tacos twice as good and half as expensive as you’ll find in San Francisco at The Oasis, an unassuming market and cafe on the corner of Hornitas Road and the Great Central Highway.

It’s easy to put on blinders when going someplace as extraordinary as Yosemite, but there’s more to this scenic, historic slice of Northern California than you may realize from the highway. To make the most of your park visit, budget for a few detours on the drive there and back — because, ironically, one of the most fun ways to see Yosemite is to spend time outside of it.