In the 1930s, the great open road in the United States meant freedom along Route 66 or riding through a new town with hopes of adventure just around the corner. But for Black folks traveling during the Jim Crow-era, the great open road wasn’t always great, and often, for us, it was life or death. It meant potentially perilous journeys plagued by the fear of making the wrong turn into a “sundown town” or stopping at a roadside diner just to be refused service.

Enter: The Negro Motorist Green Book. Victor Hugo Green, a Harlem postal worker, spent years throughout the 1930s compiling data on Black-owned businesses. At the time, the country was rife with Jim Crow laws and segregation so many businesses wouldn’t accommodate or serve Black folks. In his 1936 guidebook, Green curated a list of New York City establishments — from restaurants to gas stations — where Black people would be safe to patronize. Soon after, the Green Book rose in popularity and many Black travelers wouldn’t leave the house without it, so Green expanded by adding Black-owned (and Black-friendly) businesses across the nation.

After the Civil Rights Act of 1964 was passed, the Green Book faded out of publication because the legislation was lauded as the end of discrimination in the US. While overt discrimination is now illegal, today, Black Americans still experience anxiety while traveling. We are still routinely profiled, discriminated against, and often, fatally killed at the hands of police and this danger is only heightened while traveling. But as Black travelers, we know that wherever there is a Black-owned business, there is a sense of safety, comfort, and home no matter where we are in the world.

Diversity and travel consultant Martinique Lewis is addressing modern-day Black travelers’ needs with her new book, The ABC Travel Green Book. On August 28, 2020, she released the guidebook with the aim to connect the African diaspora globally. Lewis’ guide goes beyond the US and lists Black-owned businesses, neighborhoods, and communities safe for Black folks on six continents. 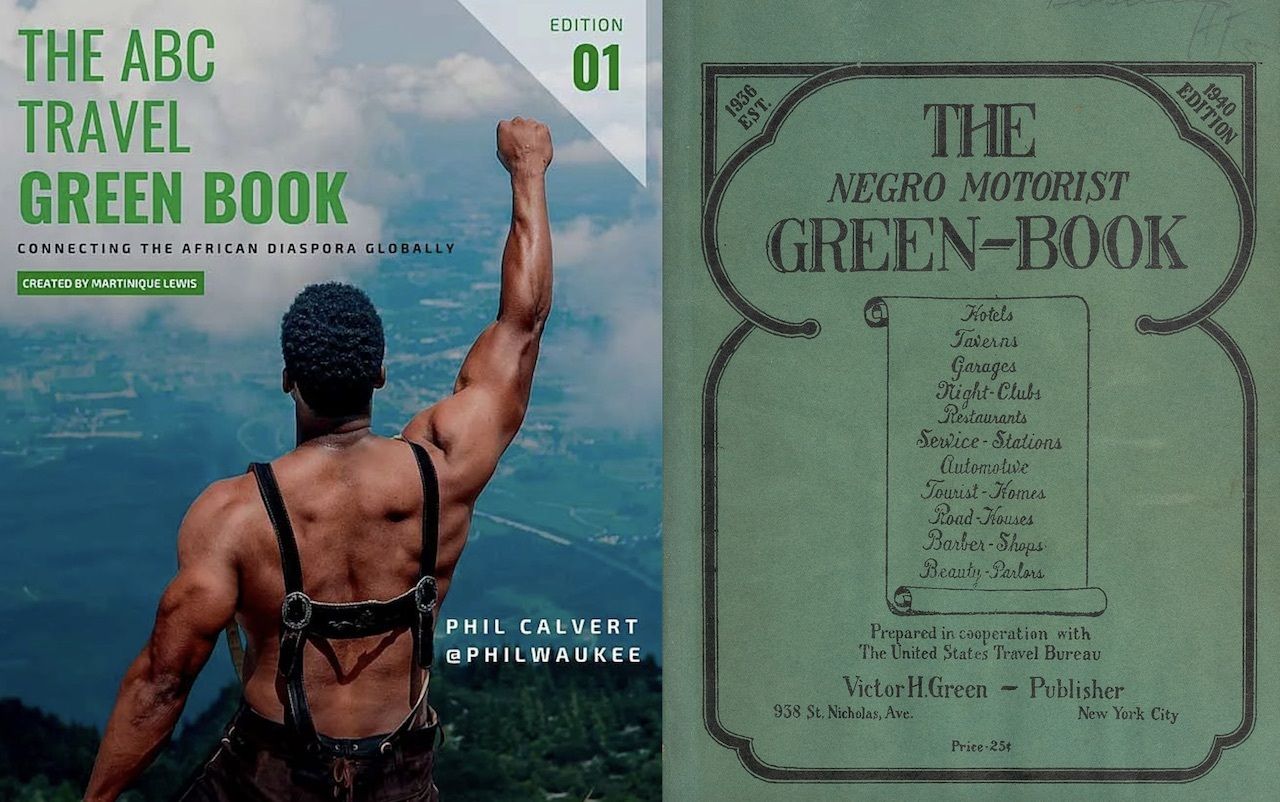 In our interview with Lewis we asked why she was compelled to do this work; she says, “I was traveling and realizing that Black people were really everywhere.” Her travels led her to question why she (and presumably, many others) didn’t know about the Black-owned hostels or Black history tours she was experiencing. Reminding us that Black people are not a monolith, she explains, The ABC Travel Green Book was designed to highlight the varying beauty of Black culture worldwide — from Atlanta to Accra.

Lewis has been working tirelessly in the travel industry for the last four years, and it was during the first Black history month of her travel career that she learned about the original book. Nodding to Green as the reason Black Americans could travel during the Great Migration, Lewis recognized the impact of his legacy. “We should be celebrating Victor Hugo Green like we celebrate Martin Luther King.”

She set out to honor this erased part of Black history by creating this generation’s answer to Black travel — The ABC Travel Greebook. The around-the-world project took two years and it wasn’t an easy journey. Along the way, Lewis had to find ways into new international Black communities, overcome language barriers, and work through the realities of colonialism’s long-standing effects.

“I remember being really discouraged because there’s not a lot of Black-owned businesses in Africa,” Lewis says. It’s her hope that her book will shed a light on the inequalities that Black people still face globally.

The information in this guidebook can not be Googled — Lewis makes that clear. From where to get your hair braided in South Korea to Black expat Facebook groups in dozens of cities, The ABC Travel Green Book has it. In major cities like London, Black companies are plentiful, but finding us is a bit harder in other parts of the world. In the true spirit of community, it’s Lewis’ hope that when travelers find a new Black business not included in the book, they’ll reach out to her detailing their experience so that the business can be added in forthcoming editions.

Besides the importance of buying Black, Martinique Lewis and Victor Hugo Green both created their guides with non-Black brands in mind, to an extent. Here’s why: Black people’s buying power has long been undervalued. Though Black travelers spend billions annually, large corporations often don’t consider Black folks a necessary target market. With her book, Lewis wants the travel industry at large to realize the buying power of our people and in turn, invest in our communities. Lewis wants to see travel publications and tour operators include Black-owned businesses in their magazines and itineraries, and use the guide as a resource.

A report from 2018 proved that Black Americans spent $63 billion on travel in one year, but Lewis urges us to remember that the number is not reflective of the spending power of the entire diaspora. For example, she leans on the example of Black Europeans who typically have more vacation days than Black Americans and who live on a continent where traveling is geographically more accessible. The guidebook was created with the idea of keeping the Black dollar circulating everywhere we travel.

With the media recently looking to amplify Black voices, due to the realities of Black struggles, The ABC Travel Greebook comes at the perfect time. “With the unfortunate death of George Floyd, everyone all of the sudden wants to amplify Black voices,” Lewis says. The guidebook doubles as a tool for holding travel brands and allies accountable for the diversity and inclusivity they’re asking for.

You can, and should, purchase The ABC Travel Green Book here.