Nine of the original Michelin star restaurants in Las Vegas are still standing. Over the past decade, their menus may have evolved, some of the furniture may have been moved around, and even some of the executive chefs may have changed. But the reputations of these Michelin star restaurants in Las Vegas continue to precede them. When it comes to the level of culinary artistry that drives the top restaurants in major food destinations, even a 15-year-old guide is a pretty good indicator of where to get a great meal — especially in a place so synonymous with indulgence that it’s nicknamed Sin City.

If gluttony is one sin you’re looking to embrace during your next trip to Nevada’s adult playground, these are the nine restaurants that earned top spots in the short-lived Las Vegas Michelin guides — and how much you should be prepared to spend at each one. 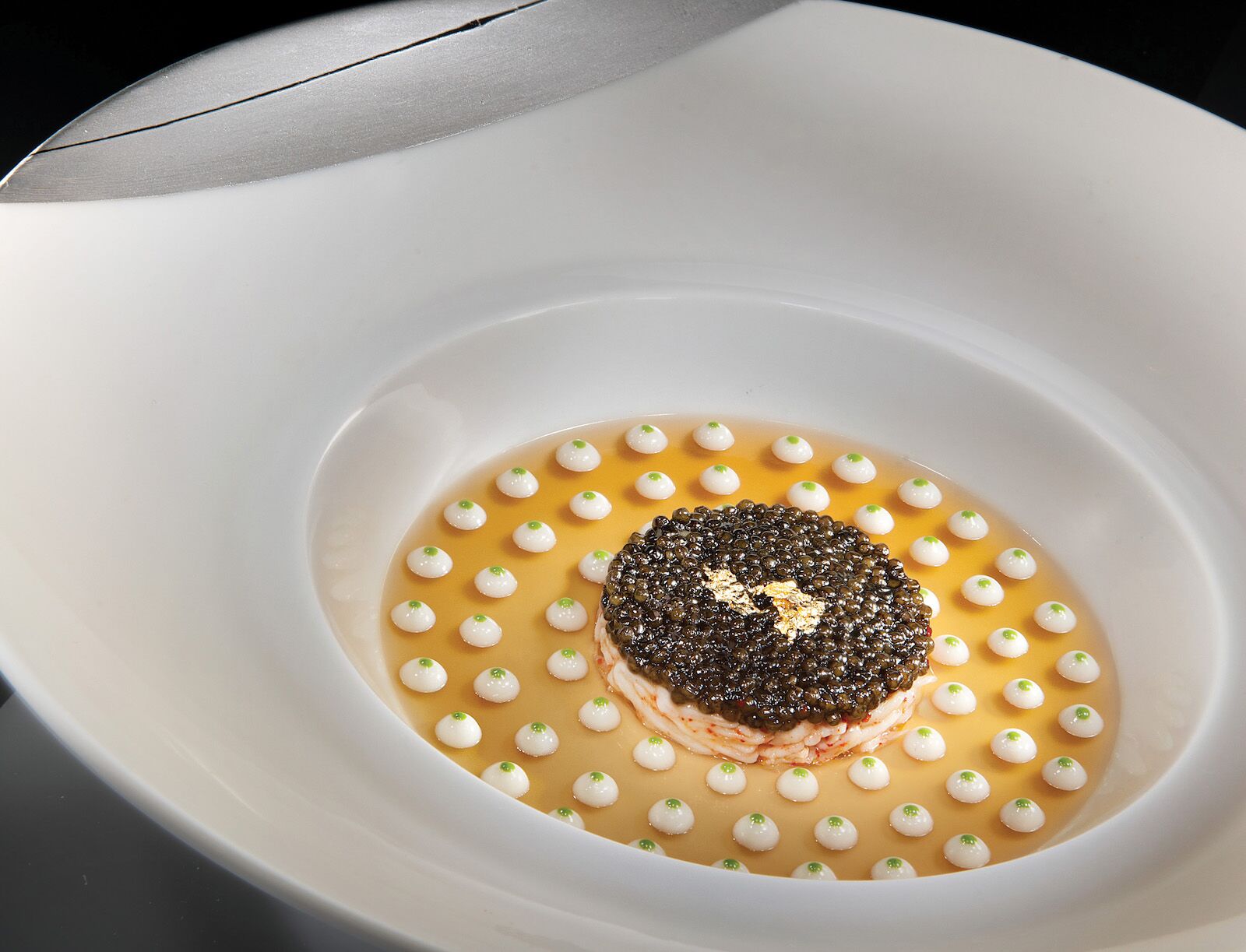 French chef and restaurateur Joël Robuchon racked up 31 Michelin stars in his lifetime — more than any other chef to date. The only restaurant in Las Vegas ever to receive Michelin’s highest rating, Robuchon’s eponymous eatery in the MGM Grand earned him three of those stars.

Inside, the restaurant could pass for an Upper East Side pied-à-terre, with vaulted ceilings, plush velvet booths, and a Baccarat chandelier hanging overhead. The Art Deco decor adheres to a deep purple and red color palette that’s as sumptuous as the French-inspired fare that’s served on gilded dinnerware. Robuchon has described his culinary mission as creating “grand” yet “simple” dishes from top-of-the-line ingredients and equipment. Specific ingredients change as the menus do, but at least one expression of caviar and foie gras is all but guaranteed.

Unsurprisingly, it’s a pretty penny to dine at the top-rated Michelin star restaurant in Las Vegas. Exactly how many pennies you should expect to spend depends on whether you order a la carte or choose one of Joël Robuchon’s tasting menus. The priciest option is the 16-course degustation (or tasting) menu, which will run you $500 per person excluding cocktails and wine pairings. But even if you opt for one of the smaller tasting menus or plan to go a la cart, you’re probably looking at a couple of hundred dollars per person on just the food alone. 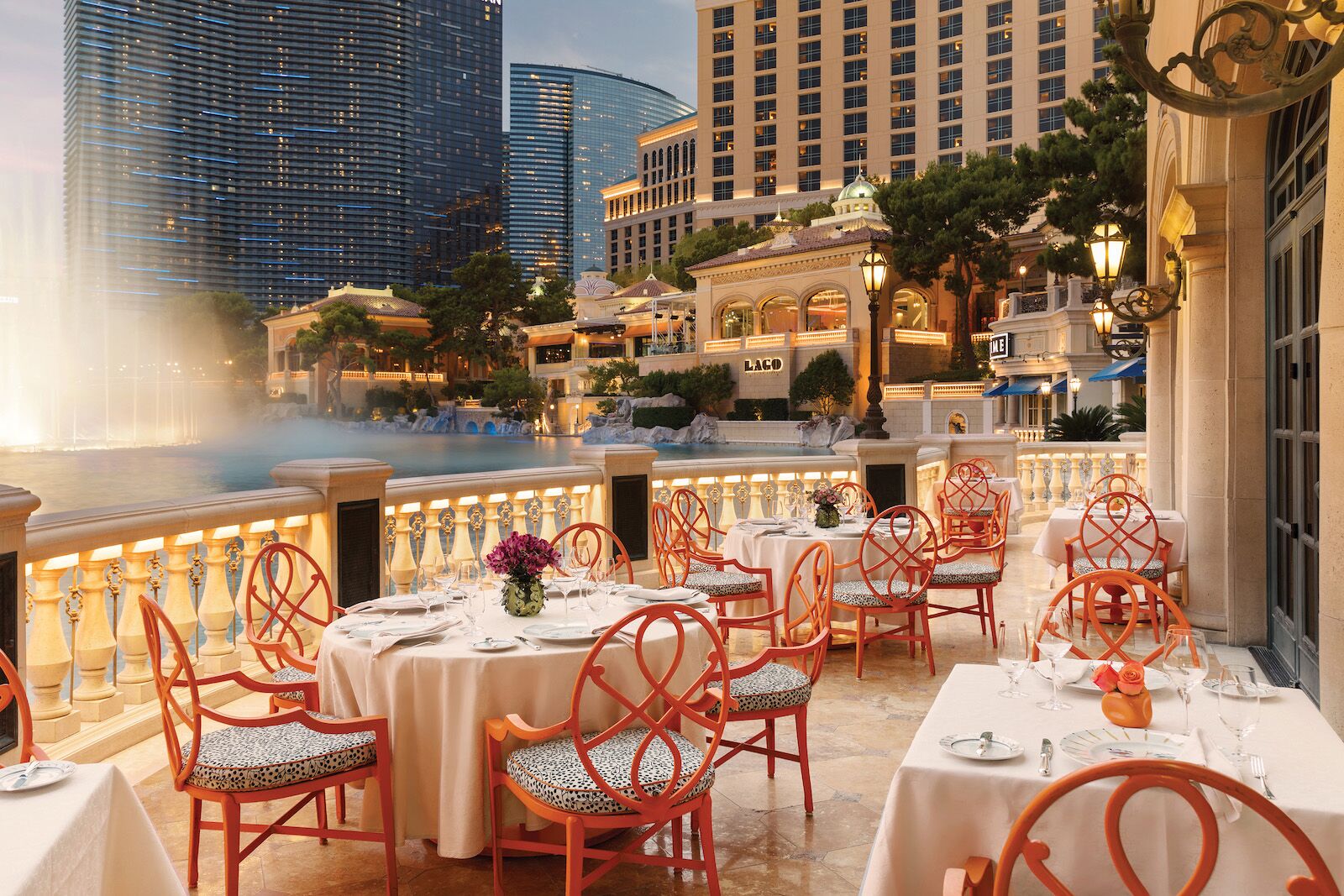 Julian Serrano, the executive chef behind this Bellagio hotspot, could only be described as an artist. But his creations aren’t the only artworks on display. Original Picasso paintings also hang from the walls of this Michelin star restaurant in Las Vegas.

The cuisine at Picasso is driven by Spanish and French influences, a nod to the birthplace of both Madrid-born Serrano and the restaurant’s Málaga-born muse. The wine cellar further celebrates the continent’s bounty with over 1,500 wines from European vineyards. Picasso’s five-course degustation menu comes in at less than $150 per person with optional wine pairings at two price points: standard for $93 or premium for $168. There’s also a four-course prix fixe menu — with $83 and $148 wine pairings — and a five-course vegan tasting menu.

The best seats in the house are located outside on the patio, which overlooks the Bellagio fountains, although Picasso fans may want to dine inside. Between the terracotta tiles, bistro-style chairs, and colorful cubist rug, the decor itself is reminiscent of a Picasso still life. 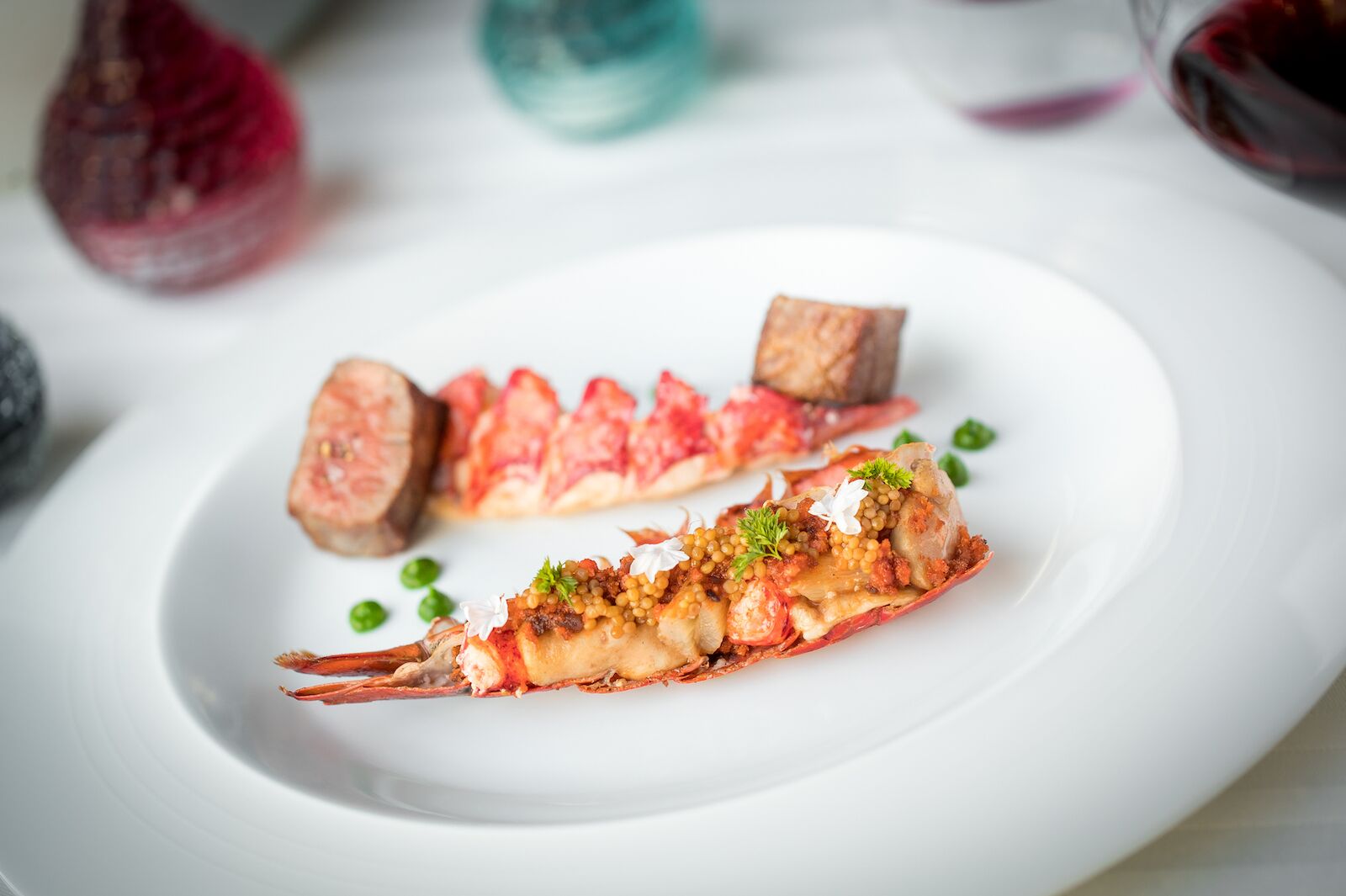 Located in Caesars Palace, Restaurant Guy Savoy in Las Vegas is modeled after Restaurant Guy Savoy in Paris, which currently holds three Michelin stars. Though the Vegas location was only awarded two stars, some of the chef’s signature dishes appear at both restaurants, including Savoy’s renowned “Colors of Caviar” and “Octopus Terrine.”

True to the French fine-dining experience, a la carte orderers can expect to spend $65 to $95 on small bites and $100 to $150 on mains. For special occasions, parties of up to six can reserve the chef’s table for a three-hour, 10-course meal accompanied by Krug Champagnes for $500 per person. Another tasting option is the Forbes Five-Star Celebration menu, which is seven courses and costs $615 per person with the premium wine pairing. 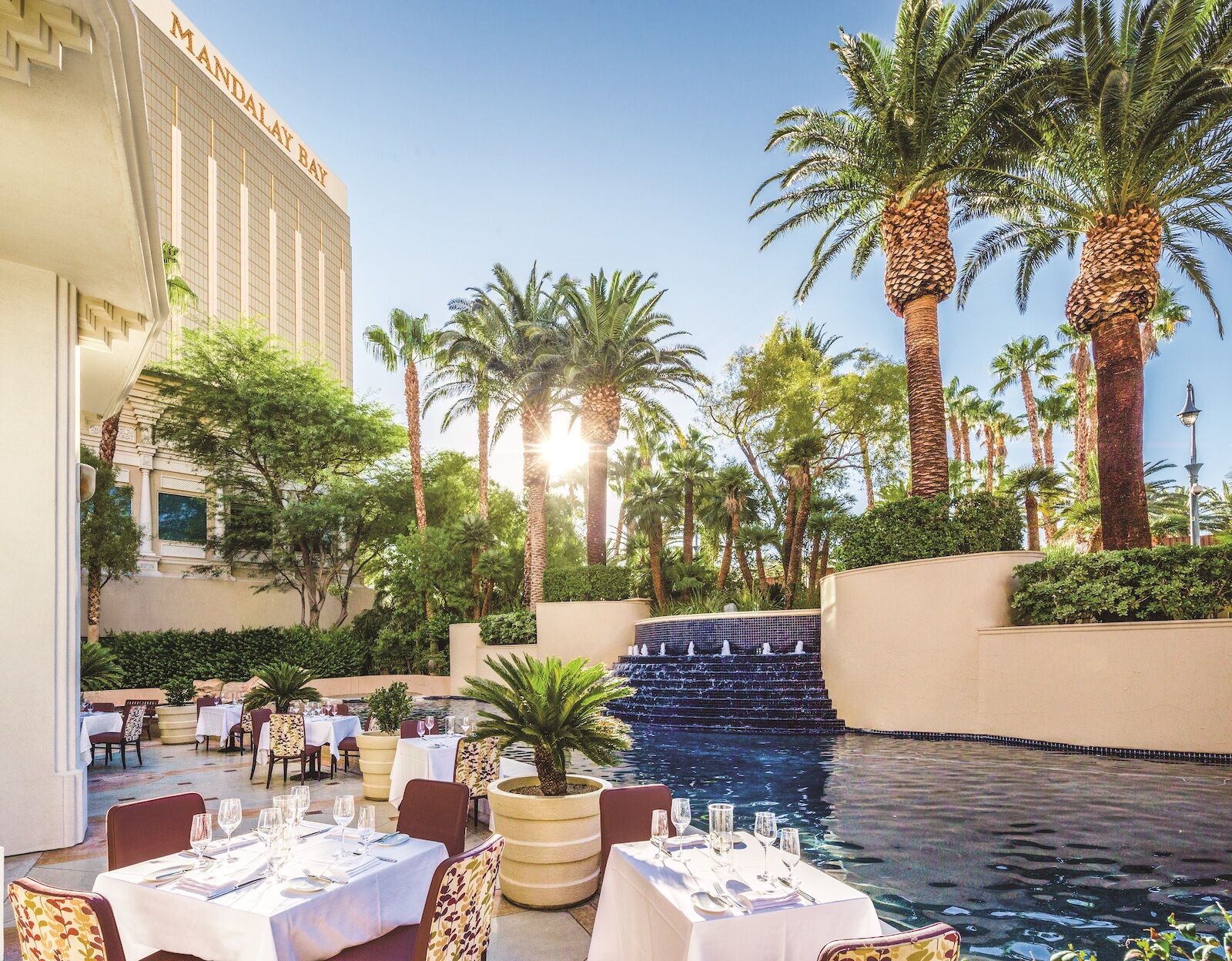 Mandalay Bay’s Aureole sets out to wine and dine its patrons — emphasis on the wine. The restaurant’s centerpiece is a four-story steel-and-glass wine tower stocked with almost 3,000 different selections and 50,000 total bottles from around the world. “Wine angels” tend to the collection, donning sparkly getups and appearing to descend from the heavens as they’re literally strapped into wires to navigate the vertical cellar. Equally spectacular is the Swan Court oudoor dining area, which is positioned next to a lagoon where elegant white waterfowl swim.

Aureole’s varied menu is best described as upscale American, although dishes like the Spanish Octopus with Iberico chorizo and Black Truffle Tagliatelle give the cuisine a Mediterranean bent. In addition to the regular menu, which features $20 to $30 appetizers and $60 to $100 mains, Aureole has a seasonal six-course tasting menu for $149 per person. Occasionally, the restaurant also hosts special events, such as the Chimney Rock dinner that’s currently on offer and includes a six-course meal plus wine pairings from Napa’s Stags Leap district. 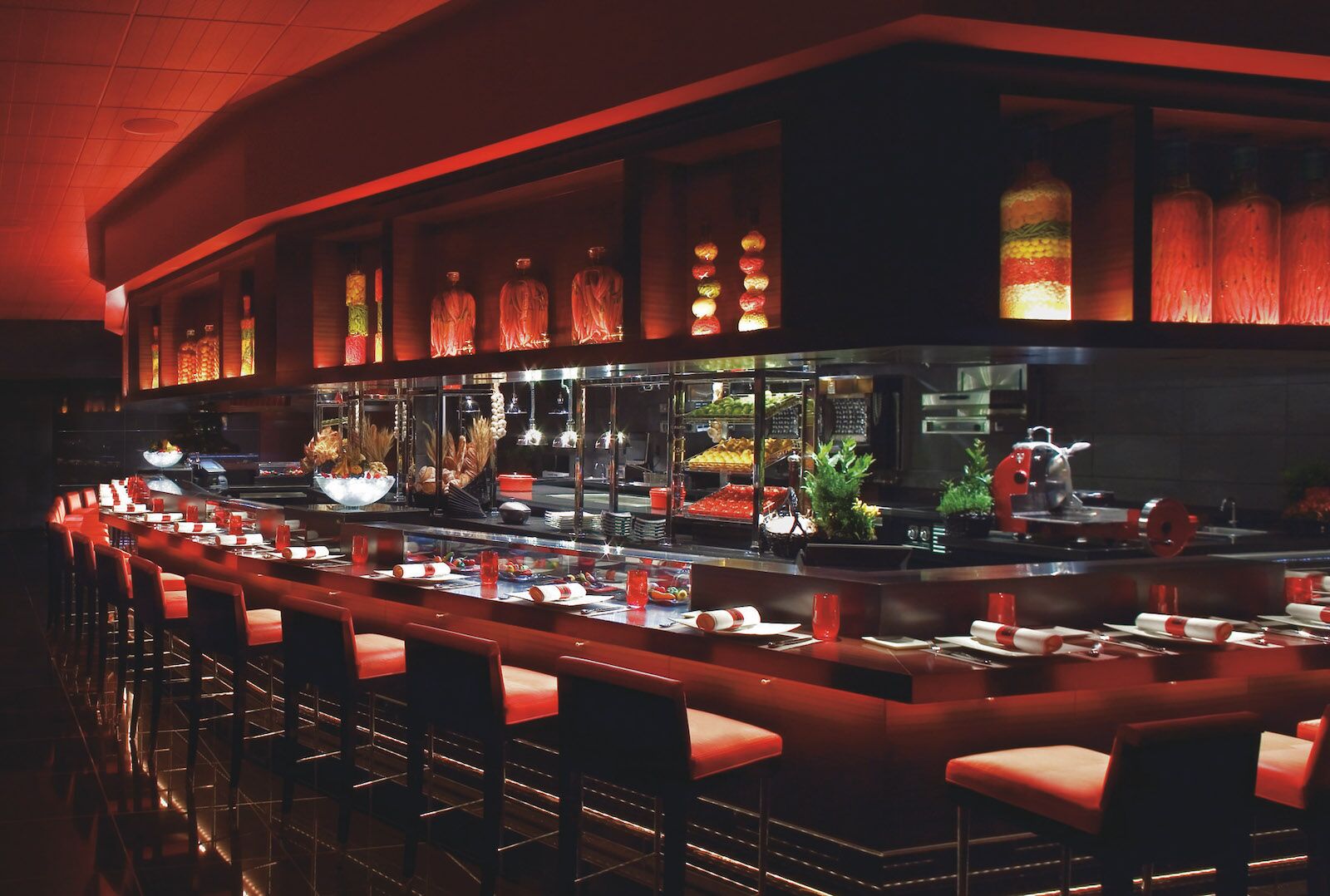 L’Atelier Joël Robuchon was designed for diners who want to experience a Michelin star restaurant in Las Vegas but have reservations about paying for the full Robuchon — or couldn’t get a reservation at the three-star flagship. The open kitchen at L’Atelier — meaning “workshop” in French — is a major selling point of the one-star experience. Snag a seat at the counter for the ultimate look into how the magic is made.

The appeal of L’Atelier is based on its tapas-style bites, while the techniques and ingredients used reflect Robuchon’s classic French background. The restaurant has five set menus: a theater menu for $58 per person, two prix fixe menus priced at $98 and $128 per person, and a seasonal discovery menu for $188 per person or $168 per person for the vegetarian option. Additional wine pairings are offered at two price points, either $125 or $225 per person. 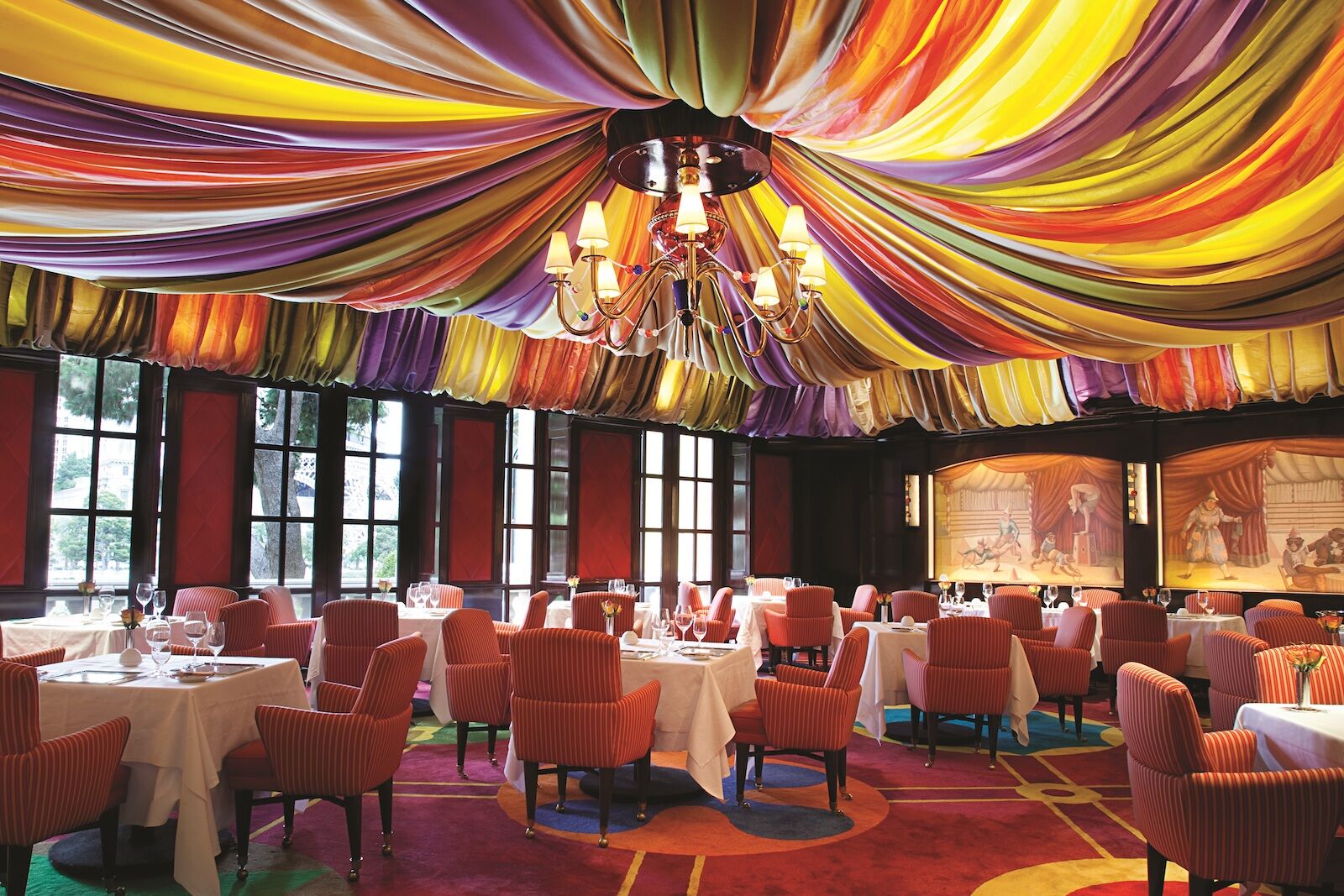 Le Cirque has been bringing gastronomes to the Bellagio since 1998 when the casino-hotel first arrived in Las Vegas. But the Le Cirque name dates back even farther. The first Le Cirque opened in Manhattan in 1974 and quickly became a gathering place for New York City’s elite. It’s since shuttered, but the Las Vegas location is going strong — some say it’s better than ever under the direction of the new executive chef Dameon Evers. And the whimsical decor is even more fabulous than the original, with circus-themed wallpaper and a flowy fabric fixture hanging down from the ceiling to create the illusion that you’re dining under a big top.

Don’t expect to be served peanuts and cracker jacks, however. Le Cirque specializes in French-inspired seafood, although ingredients like duck confit, white truffles, and a 45-day dry-aged American Wagyu that you can only get at Le Cirque, also appear on the menus.

Le Cirque’s signature degustation menu is 10 courses and costs $388 per person. There’s also a six-course menu for $288 per person and a vegetarian version for the same price that can be made vegan on request. But the best deal is the theater menu. For $128 per person, you can get a three-course meal at Le Cirque before hopping over to the Bellagio’s Cirque du Soleil theater for an after-dinner show. 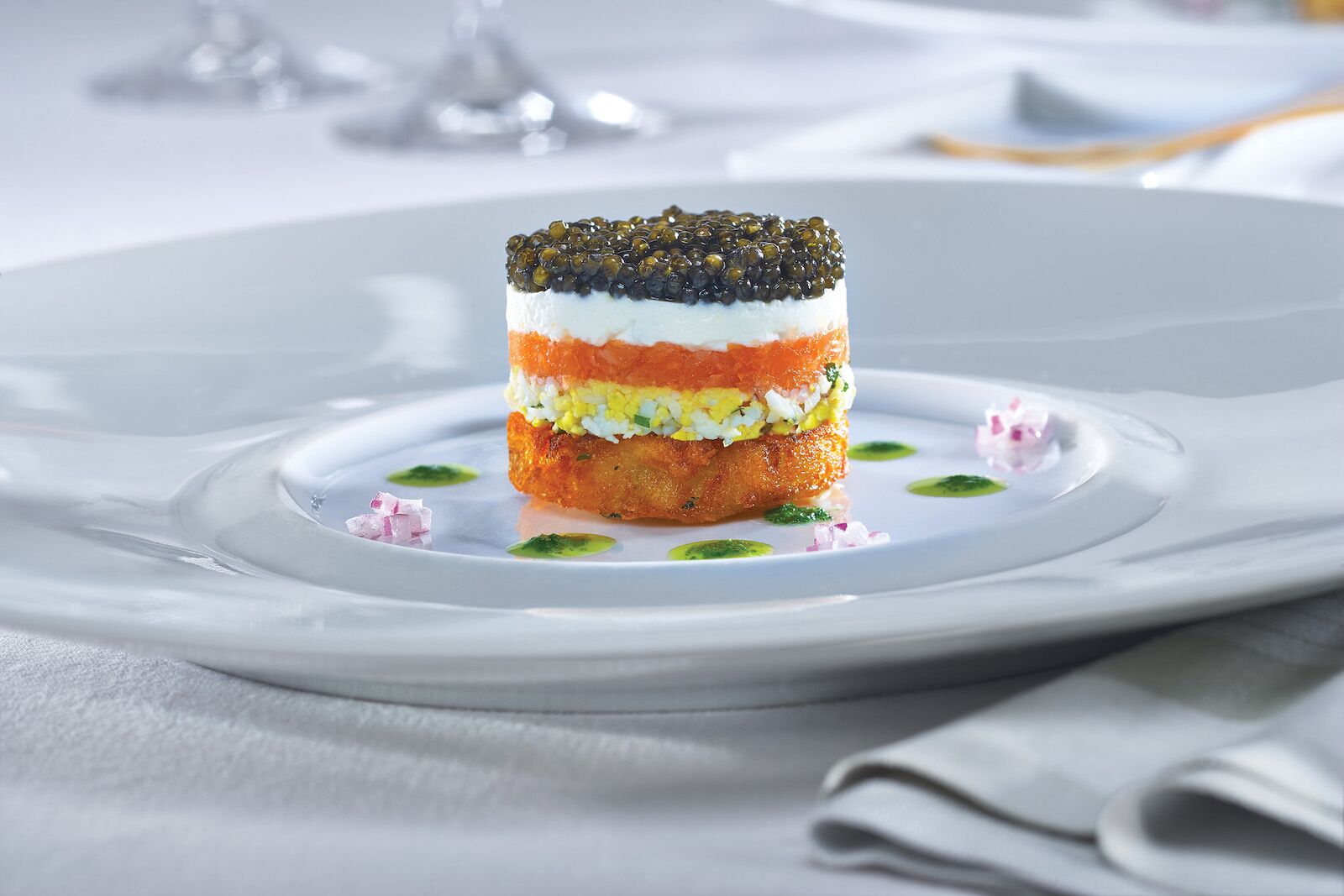 Lobster pot pie. Hamachi crudo. Ice cold or charcoal-grilled oysters. Royal Osetra caviar. The Bellagio’s Michael Mina restaurant brings all the flavors of the ocean to the middle of Nevada’s Mojave Desert. Fresh seafood is flown in daily while the dishes themselves transport diners all over the world, from the Mediterranean to Japan.

Two seven-course tasting menus are available at this Michelin star restaurant in Las Vegas: Seasons of Mina and the Signature Tasting Menu, both of which are priced at $175 per person plus $105 for the wine pairing. A vegetarian tasting menu is also available for $115 per person, plus $82 for the wine pairing. If you do eat shellfish, consesus says that the lobster pot pie with black truffle is the dish to get, either as part of the Signature Tasting Menu or a la carte.

The only full-service restaurant in the Trump International Hotel, DJT is a classic American steakhouse with a marbleized interior to mirror the sheen of the hotel’s golden facade.

It’s pricey for a typical restaurant — think $20 starters and $58 ribeyes — but compared to the prix fixe menus of some other Michelin star restaurants in Las Vegas, DJT is a pretty good deal. Even the wine list is reasonable, with bottles averaging around $75, although it’s the craft cocktails that really stand out.

Old fashioned fans are in particular luck. DJT serves four different versions of the old fashioned — the millionaire, billionaire, trillionaire, and extraordinaire — made with White Pig Rye Whiskey aged 10 to 18 years and priced from $25 to $150, respectively.

Booze aside, DJT is also the rare Michelin star restaurant in Las Vegas to have a dedicated kids menu. And considering Trump International is a smoke-free hotel without a casino, it’s one spot you can feel as comfortable bringing the whole family as you would a date. 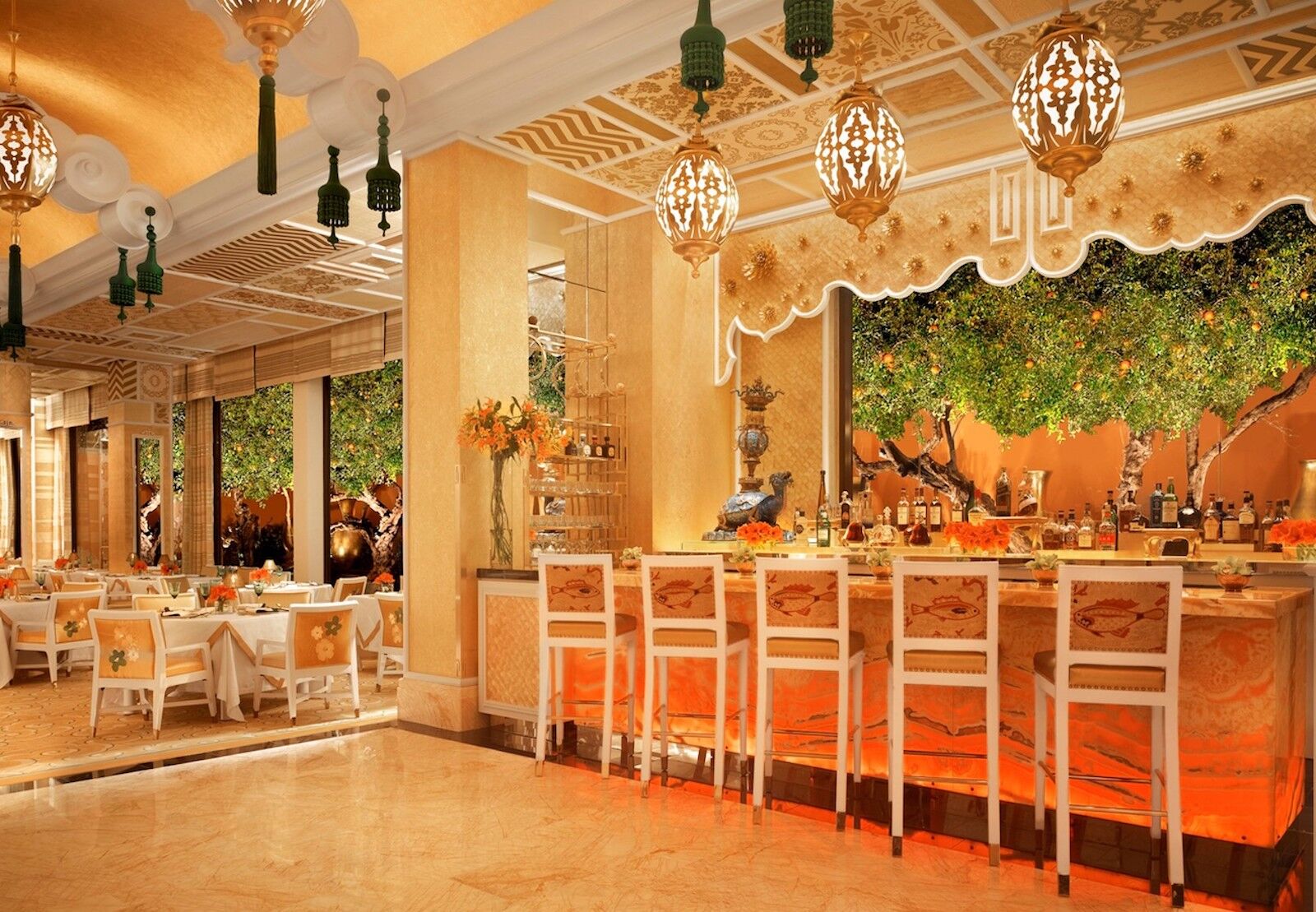 When Wing Lei was awarded its first Michelin star, no other Chinese restaurant in North America could claim that honor. But with dishes like wok-tossed sea cucumber, chilled abalone, and Japanese wagyu, Wing Lei isn’t your average late-night chow mein joint.

Chef Ming Yu blends Cantonese, Shanghainese, and Szechuan traditions in his cuisine, but there’s one clear showstopper on the menu: the Imperial Peking Duck, which is carved tableside when ordered a la carte and is also the backbone of the restaurant’s two tasting menus. All six courses of the Imperial Peking Duck Tasting Menu incorporate the star ingredient and together cost $118.88 per person, with an optional wine pairing for $78.88. The other tasting menu, Chef Ming’s Summer Signature Dinner, only has five courses but costs $50 more per person for the meal and $20 more per person for the wine pairings.

Either prix fixe option is bound to impress, but Wing Lei is one Michelin star restaurant in Las Vegas where we’d recommend ordering family-style. Just be careful — the entire seafood section is market price, and that’s a quick way to blow your budget if you’re not paying attention.

Budget TravelThese Are the 11 Cheapest Michelin-Starred Restaurants in the World
Tagged
Restaurants + Bars Las Vegas, NV, United States
What did you think of this story?
Meh
Good
Awesome