Each year for the past three years, elite teams and amateur groups of four have gathered at an international destination to compete in the Dragon World Championship Race. While the name conjures something straight out of a Harry Potter movie, or perhaps a clever way to lure avid players of Magic: The Gathering outside for a while, the championship is, in reality, the coolest new way to bring water-sports enthusiasts together to take part in a cool — and increasingly competitive — new sport. It’s called Dragon boarding, and at just a few years old, it’s among the fastest rising water sports, building upon the global popularity of SUP, or stand-up paddle boarding.

In 2019, for its third year putting on this unique event, Red Paddle Company took the starting line to Annecy in the French Alps. Racers from across the globe descended on Lake Annecy to test their skills against teams looking to become the Dragon World Champions. While the championship is the pinnacle of the sport’s “elite,” Dragon boarding is just as enjoyable for a lazy day on the river with friends and even children. I headed to Lake Annecy in June of 2019 to test the waters, and what I found wasn’t just a world-caliber race but a welcoming community actively working towards the growth of the sport.

If you’re looking for a creative new way to bring people together outside, Dragon boarding might be just the thing. Here’s the lowdown on this rising water-based activity.

What is a Dragon board? 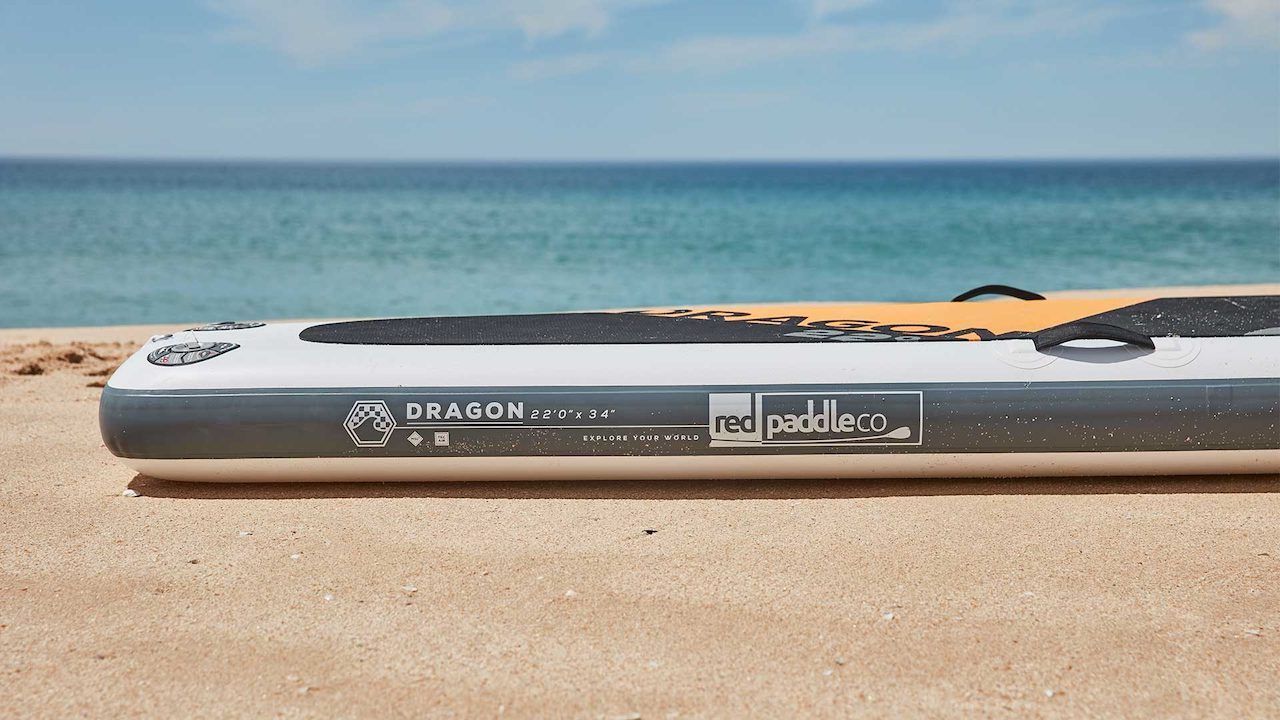 In addition to making an array of inflatable boards for enthusiasts and competitors alike, Red Paddle Company wanted to create something unique that they could create an event around. And with that, the Dragon board was born. Picture a traditional stand-up paddleboard. Add length and girth, resulting in increased stability, and what you have is the perfect way to get your family on the water together — finally.

At 22 feet long (and a sleek 34 inches wide), the board holds four participants who, when paddling in unison, can propel the board forward with precision and efficiency. As with any team sport, it requires teamwork and communication. And while the person on the rear of the board can monitor the movement of everyone forward, the remainder of the team can only see the number of people in front, depending on their position on the SUP. The person in the front is blind to the actions of those behind them.

A 22-foot-long board might sound like a beast to haul around from location to location, but these boards are actually built for travel. They are inflatable and, when deflated, fit inside a bag that can be thrown into the trunk of your car to be re-inflated when arriving at your next destination.

Testing the waters — and crossing the finish line 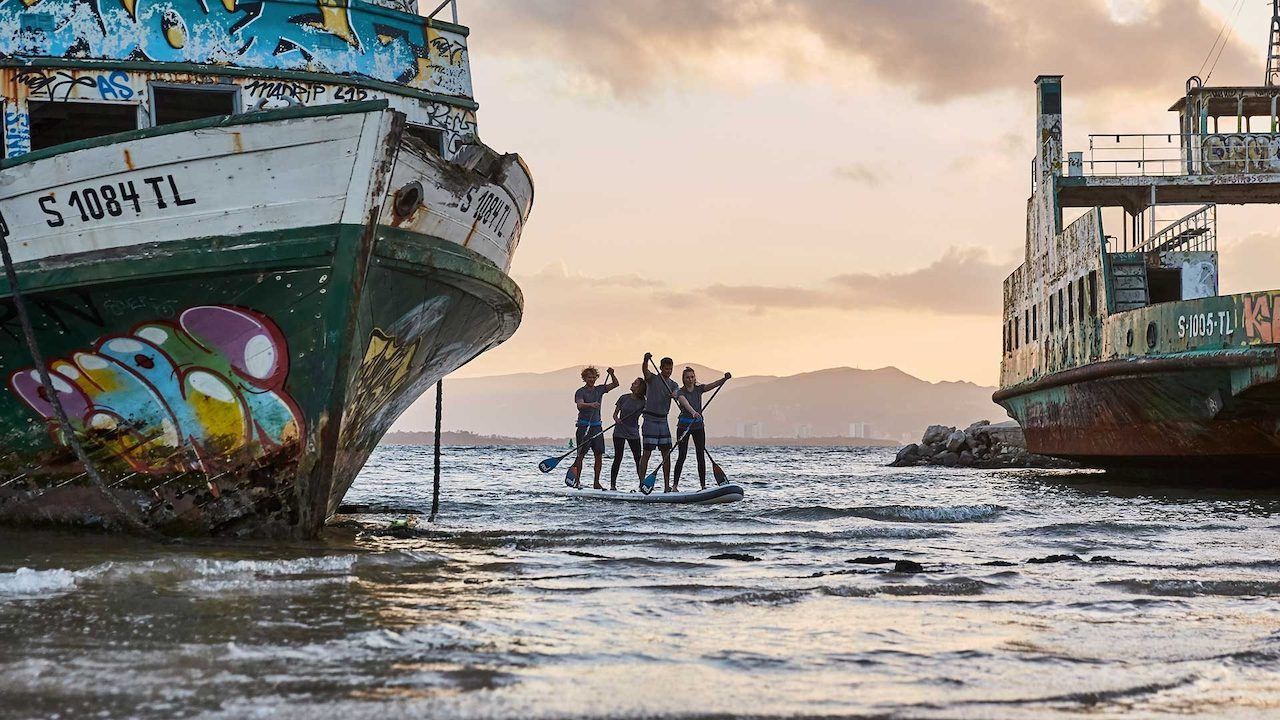 Three categories exist for this world championship event: all-male, all-female, and co-ed. Last year, competitors flocked to Austria, and in its inaugural event, the race took racers and spectators to Barbados in the Caribbean.

While paddling experience might prove advantageous to those seeking a spot on the podium, it isn’t a prerequisite for enjoying this event. I have spent a large amount of time on SUPs over the last decade, but that wouldn’t be the case for all members of our co-ed team that opted to meet and paddle for the first time together just a day before the race stages began. Two of our four members were well-versed in SUP paddling with one member of our illustrious team even competing in whitewater river races on SUPs. The other two had limited experience, but that wasn’t a deterrent. We hit the water together less than 24 hours before the race kicked off. With a little coaching and practice, we seemed to have the hang of team racing.

The race wasn’t just a mad sprint from point A to B. It involved multiple teams lining up and taking off from a dead start only to approach the first true test: a floating buoy. Teams were required to make a turn around this buoy. After that turn, there were multiple other buoys that involved turns (some close to 180-degree turns) and then sprinting straight ahead only to have to slow and turn for the next buoy. The two-day event saw multiple racecourse changes (buoys moved) to keep teams from mastering a particular course.

At the end of the weekend, our team assembled from around the United States and England didn’t make the podium, and didn’t experience the victory lap, but we had a blast, and we paddled away with a ninth-place ranking in the co-ed division.

Why the event — and the sport — is great for families 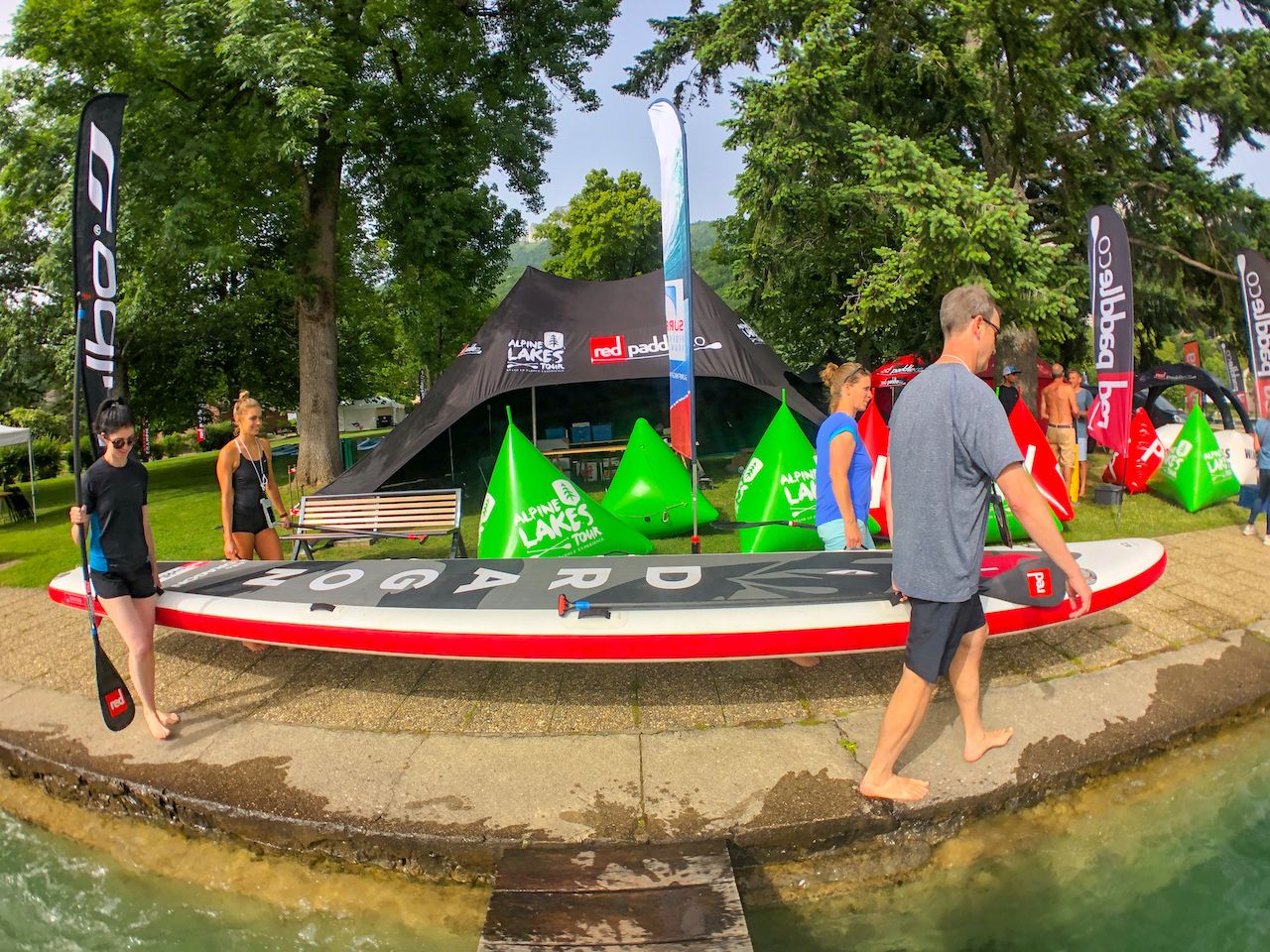 Whether you opt to participate, go to watch other competitors, or just like the idea of having a SUP that the entire family can enjoy, the Dragon board has a diverse quiver of uses. There’s something special about toeing the line (imaginary) on the water with participants from around the world who come not only to compete but also to immerse themselves in a community of like-minded individuals. The brand has an array of boards available for the weekend to take out on the water. In addition to being a competitive race, it’s also a large demo event for trying boards to ascertain which board (or boards) might be best for your family.

Brand experts are also available to answer questions and size up participants so that they can get dialed in for paddle length and appropriate board style and size. There are three positions for paddlers: sitting, kneeling, or standing. Even if you fall, the worst that can happen will be that you get wet. The sport is a great way to explore the waterways, a great workout, and unlike kayaking, you can move around on the board when you need a new position.

Trying a Dragon board closer to home 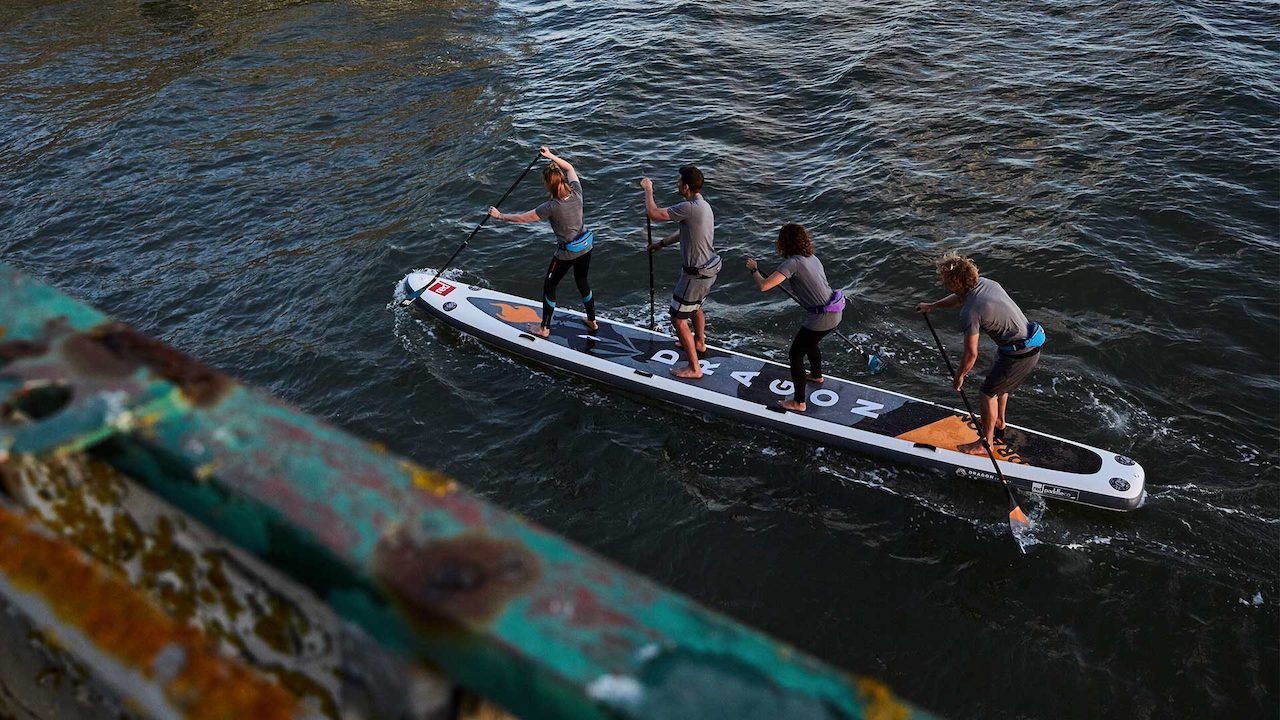 If you can’t make it to the world championship event to test your skills against others, don’t worry. Boards are great for families who are near a body of water and want to have a fun day. The board will easily hold four adults. With that said, you can build your own paddling arrangement. Grab some friends and hit the water or take the family out for an experience that you won’t likely forget. And when the day is over, deflate the board, pack it away, and start planning your next adventure. While multi-person paddle board rentals are increasingly common in river shops and outdoor outfitters like REI, the full-size 22-foot Dragon board isn’t as widely available. But a multi-person board, typically ranging in length from 14 to 17 feet, can still hold two to four people.

Availability looks to grow, though, as the sport gains attention. SUPing is a great sport for all ages and athletic abilities, and being able to add friends and family to the mix looks to do nothing but broaden its reach in the outdoor community. Whether you are young or old, slimming away from the shore or floating dock on a stand-up paddle board will not disappoint.

And when you have spent a little time on your board and are feeling confident, head over to the Dragon World Championships page and sign up your team for the 2020 competition. The destination hasn’t been announced yet, but as the sport’s popularity rises, you can bet it will be as epic as the event itself.

Tagged
Paddling Insider Guides
What did you think of this story?
Meh
Good
Awesome