Visiting Machu Picchu is one of life’s great travel experiences, but it’s not for the faint of heart. A trip to this city in the clouds involves thin air and a long, oxygen-sucking trek that’ll have you saying stuff like, “This would be a lot cooler if it was somewhere flat. Like Florida.”

Well, consider that wish granted. Kinda. A new traveling exhibit called Machu Picchu and the Golden Empires of Peru is bringing the ancient Inca citadel to the masses. The two-part program showcases nearly 200 artifacts and cultural lessons from Machu Picchu, and pairs it with a lifelike, virtual reality flying tour. It’s not meant to replace a trip to Peru, but does it even come close? We headed to the Boca Raton Museum of Art in Boca Raton, Florida — the first stop on the exhibition’s tour to see how it stacked up.

What to expect at the Machu Picchu and the Golden Empires of Peru?

Machu Picchu and the Golden Empires of Peru is really two exhibits in one. The main exhibit consists of art, jewelry, and other artifacts from the Incas, Chavin, Chimu, and Nasca peoples. The other, and more ballyhooed exhibit is a virtual reality trip to Machu Picchu. Tickets to each are sold separately. 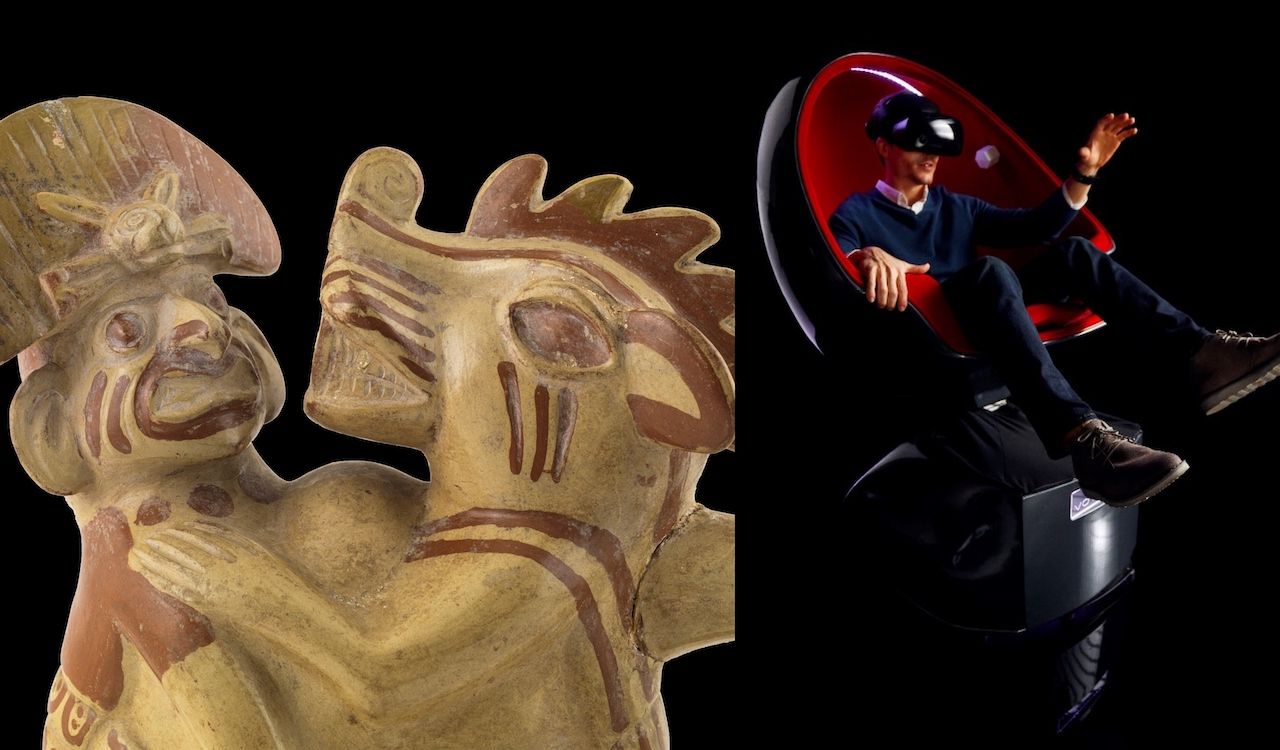 Guests start their visit in true Machu Picchu form: with a climb. The experience begins ascending a staircase adorned with drawings depicting ancient legends and other events, leading to a film screening room. A short, high-definition tour of Peruvian wildlife interspersed with overhead shots of Machu Picchu begins the immersion, and as it concludes a large stone door slowly opens.

Next, we learn the legend of Ai Apaec, a mythical Inca character who endured an epic journey through all three realms, died, then impregnated Mother Earth in the underworld.

Then, just when you’re thinking it’s safe to bring the kids back out, comes the section on ritual sacrifice. The harrowing gallery is adorned with knives, chalices, and other artifacts used in offering local warriors to the gods. A foreboding soundtrack plays under a doomsday voice who explains the whole process. 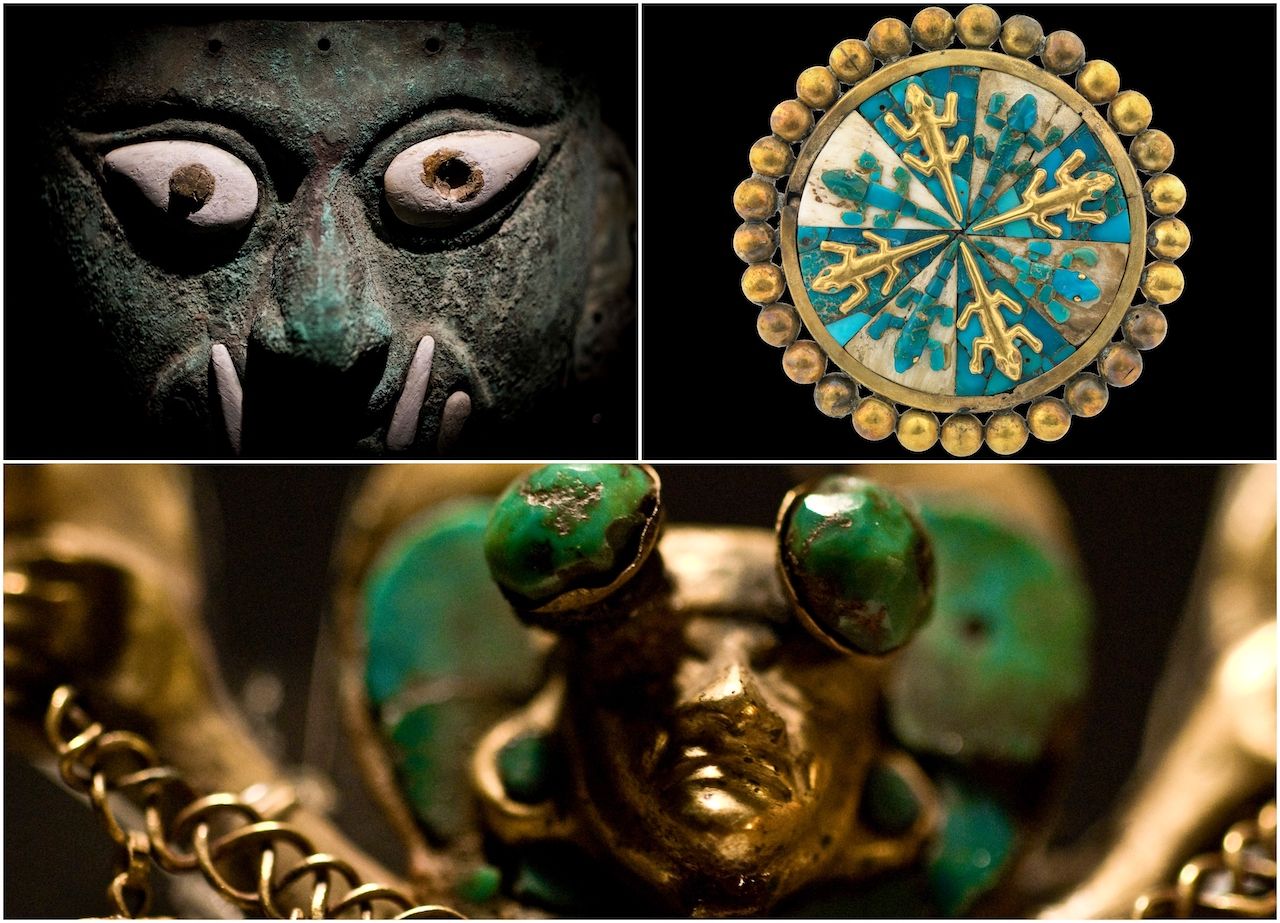 After all that darkness, it’s on to the glimmering star of the show, the ornate showcase of golden funeral attire. The stunning bejeweled costumes are impressive far beyond their monetary value. The intricacy of the designs and the power with which they were worn speaks volumes to how advanced these civilizations were.

Finally, guests come to an exhibit on Machu Picchu, its discovery, and how people visit it today. The whole thing gives guests a chance to peruse artifacts from Machu Picchu, which you won’t see if you visit the real thing. It offers a far more in-depth look at Inca, Chavin, Chimu, and Nasca cultures than you’ll find at Machu Picchu itself. And the air is much easier to breathe.

Ok, but does it really “transport” you to Machu Picchu? Or is this just a big gimmick?

The artifacts don’t really so much transport you to Machu Picchu as bring Machu Picchu to you. But ultimately, they’re still a museum exhibit, and not once did I think I was anywhere other than Boca Raton. But the novel, newsworthy part of

The virtual tour begins as guests sit in egg-shaped chairs, set just far enough off the ground so our feet don’t touch. We don our VR headsets, the lights dim, and we are visually a 360-degree space somewhere in Machu Picchu. 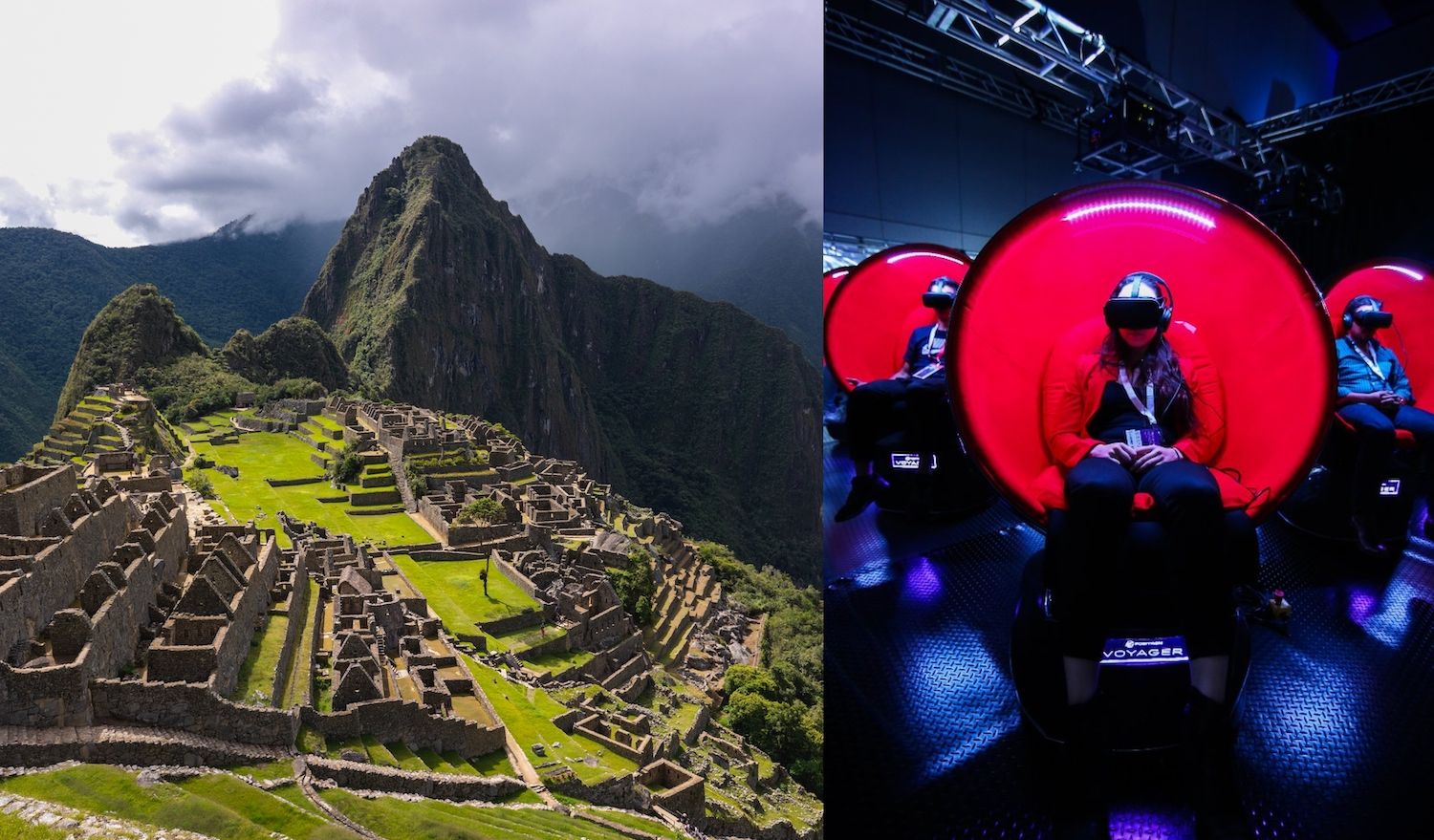 Our tour guide is an Inca warrior who’s returned from the great beyond to take us through his former home. He summons the power of the condor, and takes us on a private flying tour over the mountain citadel which is a painstakingly accurate recreation.

Our guide brings us through temples and down ancient streets, flying us over terraced farms and explaining the Incas’ advanced irrigation and storage systems. A few minutes in, a distinct smell of tropical vegetation starts wafting through the room. At first, I assumed it was just the usual fall funk that runs through South Florida. But ultimately I figured out this was a purposeful effect to further our Andean immersion.

Our guide then flies us up to Huyana Picchu, an even-higher peak above Machu Picchu and the coldest place in the city. He explains this was where the Incas stored food so that it stayed preserved. Typically, visiting this second peak involves a two-hour hike that’s nearly all vertical. The payoff? Getting crammed into a tiny store room and jostling for space in the freezing cold before heading back down. Chalk this one up for the virtual version.

The 15-minute virtual tour captures the beauty of Machu Picchu, and if nothing else makes one who is casually curious about visiting want to go there soon. It’s not a replacement for the real thing, obviously. But given that not everyone can take the real-life arduous trek to Machu Picchu, it’s a pretty fantastic experience for those who can’t go.

Is this “virtual trip” experience going to become more common?

Though virtual tours were all the rage for about a week and a half at the beginning of the pandemic, Machu Picchu and the Golden Empire of Peru is the first traveling exhibit to attempt bringing a destination to the world. But museums have been playing with VR for some time now.

In 2018, the Smithsonian Institution’s Renwick Gallery used virtual reality to bring visitors through the art of Burning Man. The virtual experience was set in a desert, and while it wasn’t exactly a virtual Playa, it did allow visitors who weren’t up for “The Burn” to see the art in one place.

More traditional museums have used VR to put people inside famous works of art, too. The National Museum of Finland, for example, gave guests headsets placing them inside R. W. Ekman’s The Opening of the Diet 1863 by Alexander II. Once inside the great painting, guests could even interact with depicted characters, including the Russian Emperor. It served to educate about the context of the painting and the culture of the time, with something more interactive than an explanatory plaque.

When is Machu Picchu open, and how do I get there?

Though Machu Picchu and the Golden Empires of Peru has announced it will travel the world after its debut in Florida, no concrete future dates have yet been announced. So stay tuned, and cross your fingers hoping it comes to a city near you. Or take a weekend this winter and go see it for yourself in Boca. It’s still a lot closer than Peru. And it has air conditioning.

MuseumsHow to crush Miami’s Frost Museum of Science in one day
Tagged
News Culture Museums
What did you think of this story?
Meh
Good
Awesome

This Miami museum is radically changing how people interact with art