There’s no place quite like Patagonia for getting outdoors. The vast wilderness at the southernmost tip of the Americas takes a bit of effort to reach, but it’s worth it to witness some of the world’s most spectacular and remote landscapes. While many visitors flock to the south of the region to see sights like Torres Del Paine, the north has plenty of alternatives, less-explored trails for hiking enthusiasts. Nahuel Huapi National Park, at the heart of Argentina’s Lake District, offers the perfect balance of scenery, history, and a little peace and quiet.

It has diverse landscapes and Patagonian wildlife. 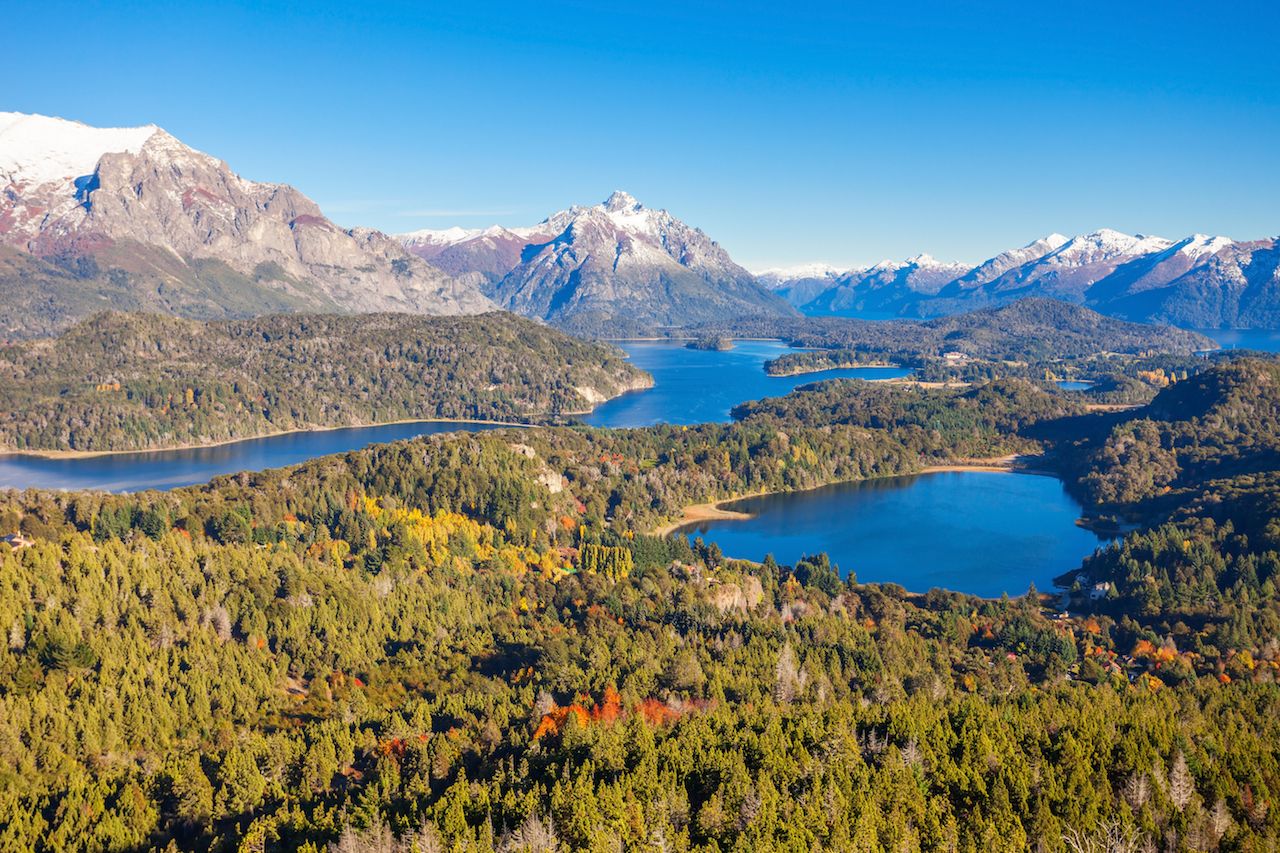 The climate in Nahuel Huapi National Park is milder than in Patagonia’s southern depths. This, combined with a varying altitude, gives the park a unique ecosystem. Between glacial lakes, you can wander through lush Valdivian rainforest, find hidden waterfalls, and see quirky local wildlife like the llao llao fungus. Many of the park’s peaks reach well over 10,000 feet, so there’s plenty of snow to be seen on the horizon, too — even in summer.

The park features a network of interconnecting hiking trails that are well marked and immaculately maintained. With the exception of the short ascent to Cerro Campanario, or the Campanario Peak, most routes are not heavily touristed, and you can expect to see pure, unblemished scenery. You might even find yourself alone on the trail, so take a moment to stop and listen to the tranquil sounds of the forest.

Fewer crowds also means there’s a good chance of seeing some of the park’s resident creatures. If you’re lucky you might spot the rare Andean huemul, an orange-brown deer that’s native to the area. You can also encounter cougars, guanacos, condors, giant Magellanic woodpeckers, and the endangered huillin otter. 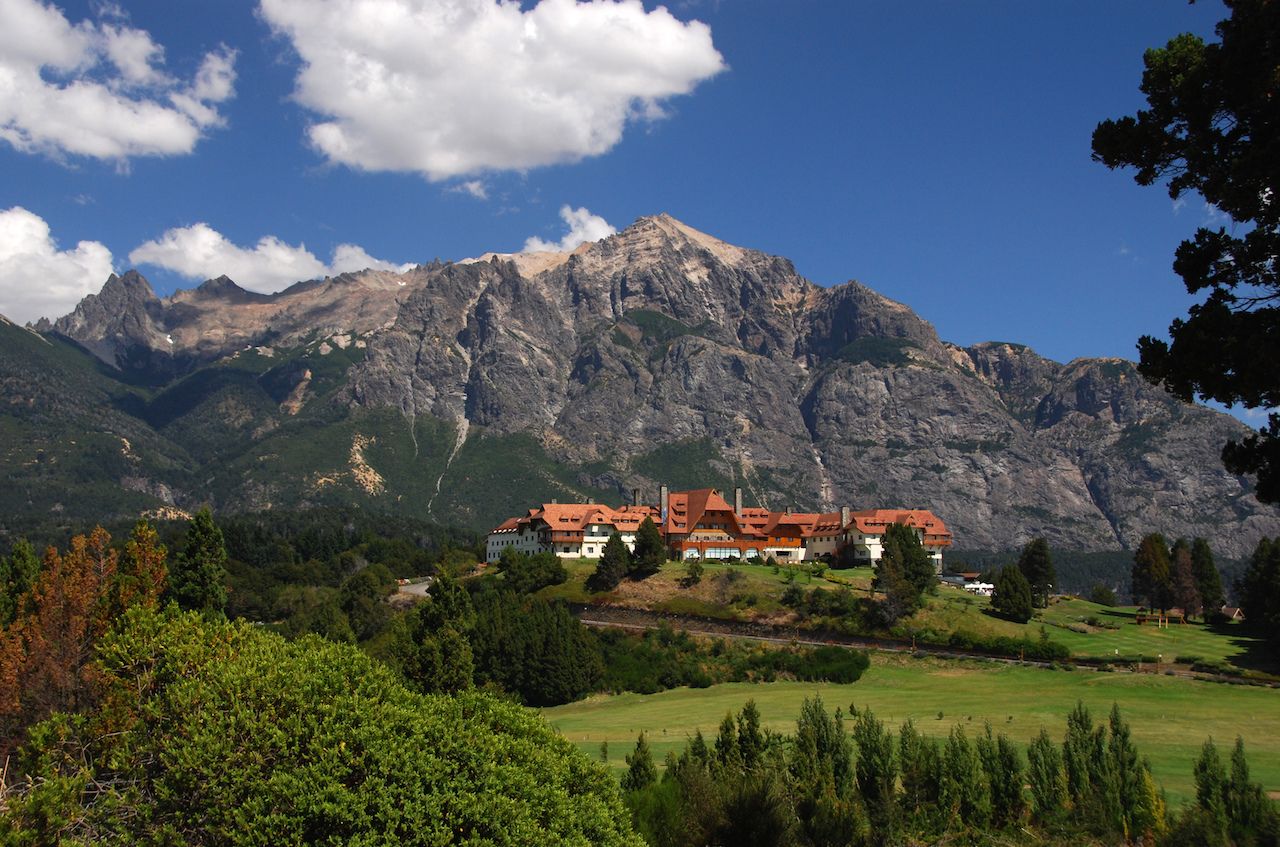 Nahuel Huapi has a longstanding legacy for outdoor activities and adventure travel. Opened in 1934, it’s Argentina’s oldest national park. The locals will tell you it’s still the most beautiful. Characterized by a network of interwoven lakes and islands, dense forestland, and a backdrop of towering mountains, it is indeed a landscape to rival anywhere for natural beauty.

The city of San Carlos de Bariloche, known commonly as just Bariloche — or affectionately as “the Switzerland of South America” — stands on the threshold of Nahuel Huapi Lake and is the gateway to exploring the park. It has that homey log-cabin feel of an Alpine village while offering everything you could possibly need as a base for exploring the region. The tourist information office at Centro Civico is a convenient first port of call, providing all the vital details and maps for trekking. While you’re in town, make sure you check out the legendary local chocolate shops and try a craft ale in Manush.

Located about 15 miles west of Bariloche, the Llao Llao Hotel is one of the area’s most recognizable landmarks. It’s a focal point of a section of the park known as Circuito Chico, which runs around the edge of Lake Moreno connecting various short hiking trails. The hotel was designed in the 1930s by leading Argentine architect Alejandro Bustillo and rebuilt a few years later after being destroyed by fire. A night’s stay in Llao Llao doesn’t come cheap, though. It’s a luxury five-star joint and a favorite among celebrities. If that’s not your style, you can still see its dramatic mountain-foot setting from various viewing points around the circuit.

One of the best spots to see it is from the nearby San Eduardo Chapel, an old wooden Gothic church designed by Bustillo around the same time as the hotel. Another slice of local history, the church’s elevated position gives a stunning panorama across both Moreno and Nahuel Huapi lakes and the surrounding peaks. 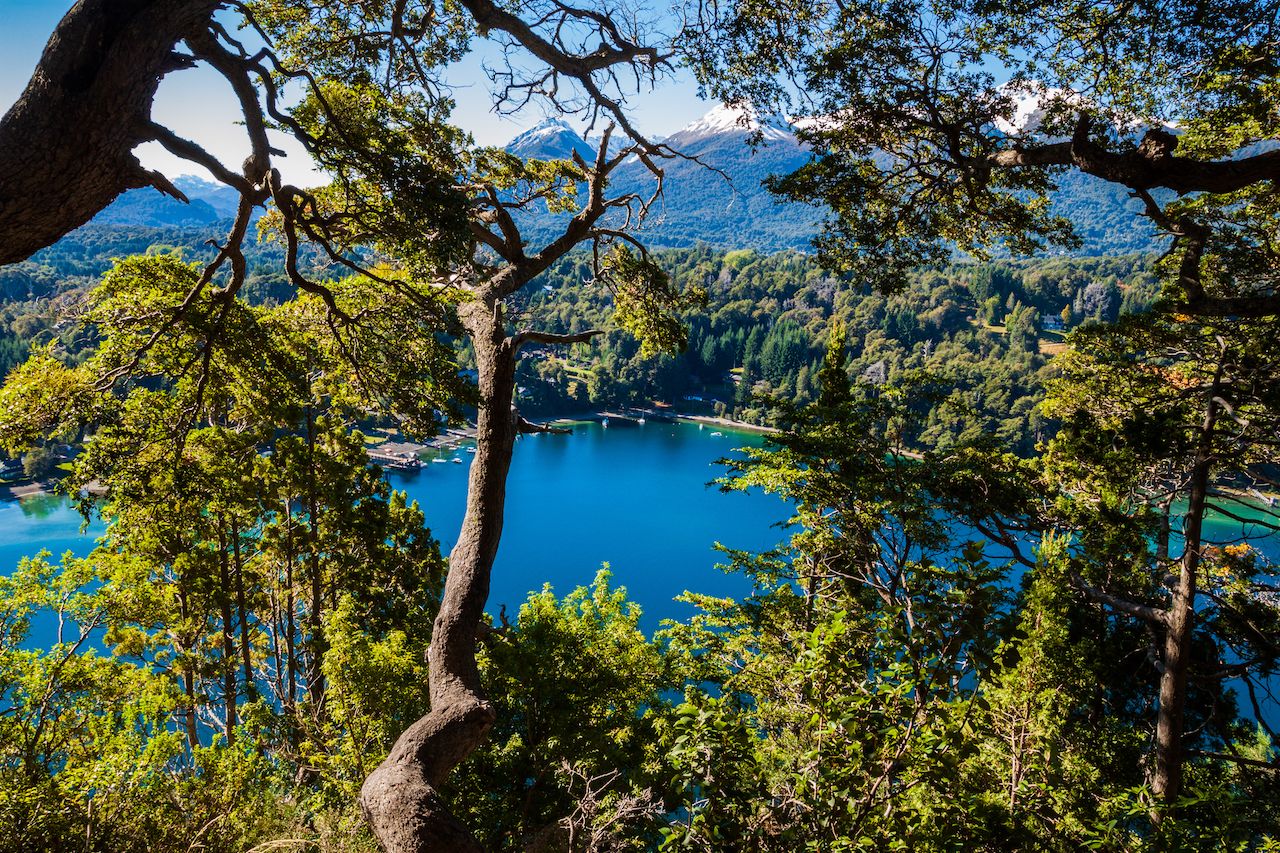 Many of the hiking trails in Nahuel Huapi National Park are short, gentle, and accessible to all levels of ability. Circuito Chico, which means short circuit or short loop, is a good place to start. From Bariloche, you can take the number 20 bus and get off at Puerto Pañuelo, which is a short walk from the San Eduardo Chapel. You can also stop midway on the bus journey to hike up to Cerro Campanario for one of the classic views across the lakes.

Just a few minutes’ walk west along the main road from Puerto Pañuelo is the trailhead for Sendero de los Arrayanes, or path of the Arrayanes trees. This gentle pathway threads around the shoreline of Moreno Lake through peaceful forestland and sprouting bamboo. Along the way you will pass mirador viewing points to catch a glimpse of green hills and rugged mountains rising up on the far side of the water. Playa Moreno, a secluded lake-beach, is a fabulous little resting point.

At the end of Sendero de los Arrayanes, another trail continues over the road towards Bahia Llao Llao, or Llao Llao Bay, and winds around to Villa Tacul, another hidden lake-beach with a great view of Nahuel Huapi Lake. A short hike inland from here leads to Cerro Llao Llao, my personal favorite spot in the park. A steep, zig-zag path climbs to a small stony summit with a breathtaking panorama of lakes and peaks stretching into the distance. 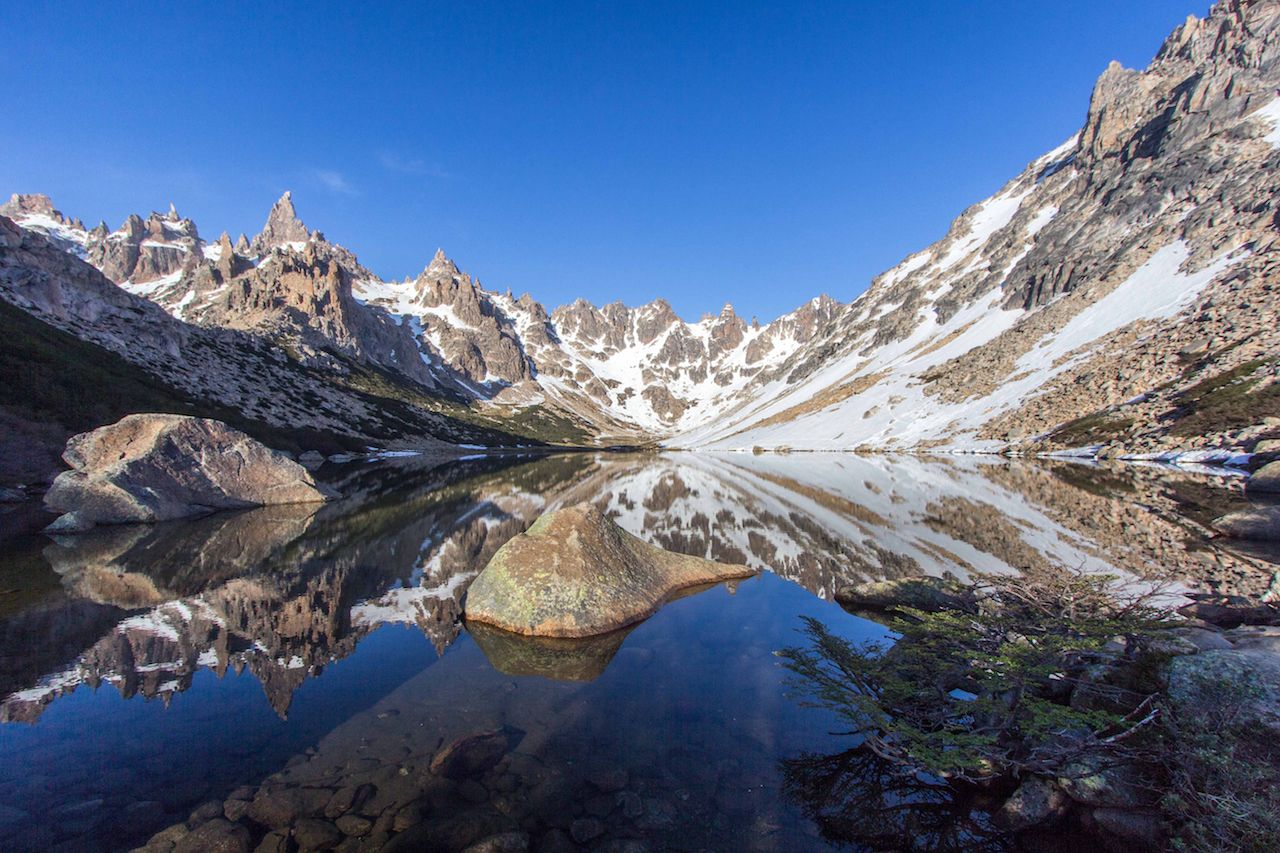 Towards the south of Nahuel Huapi National Park, some 12 miles by road from Bariloche, is Cerro Catedral, a lofty peak that is home to the largest ski center in the Southern Hemisphere. As the snow thaws out at the end of the skiing season, Catedral doubles up as another hotspot for hiking.

From the ski center, you can trek along Balcón Gutiérrez, a long, stony track that snakes down to Gutiérrez Lake. Stop for a picnic lunch on the shore before following the wide path at the lake’s edge to Cascada de los Duendes, a gurgling waterfall system concealed in the forest.

The ski center at Cerro Catedral is also the starting point for one of the park’s classic hikes to Refugio Frey, an Andean cabin. It’s a more strenuous route that can require specialist snow-hiking gear if done outside the peak summer months. If you make a good pace, the round trip can be achieved in about eight hours as a day hike, but it’s well worth making an overnight stop at the refugio to see the incredible starry night skies. (Advance booking is recommended.)

You can trek on an extinct Andean volcano. 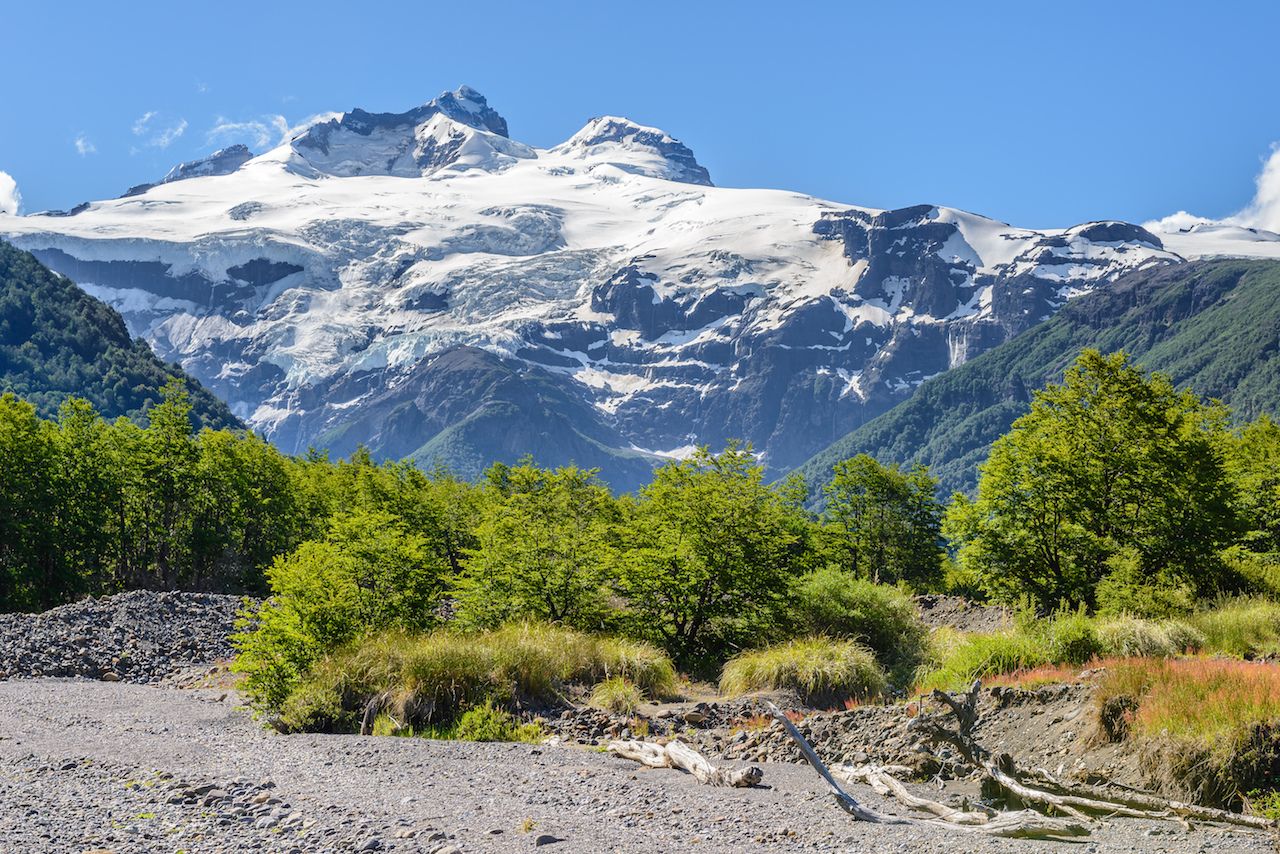 The highest peak in Nahuel Huapi National Park is Mount Tronador at 12,270 feet, close to the Chile border. The imposing sight of this extinct volcano is visible for many miles around. If you’re up for a challenge, you can hike from the base of Tronador up to Refugio Otto Meiling, perched tantalizingly between two glaciers with spectacular views in all directions.

This trail starts at Pampa Linda, a 55-mile drive southwest from Bariloche along a beautiful scenic road. It’s doable as a round-trip, one-day hike if you start early, or you can stay overnight in the refugio. For advanced trekkers, it’s possible to climb to the summit of Tronador over two or three days with the assistance of a local guide. 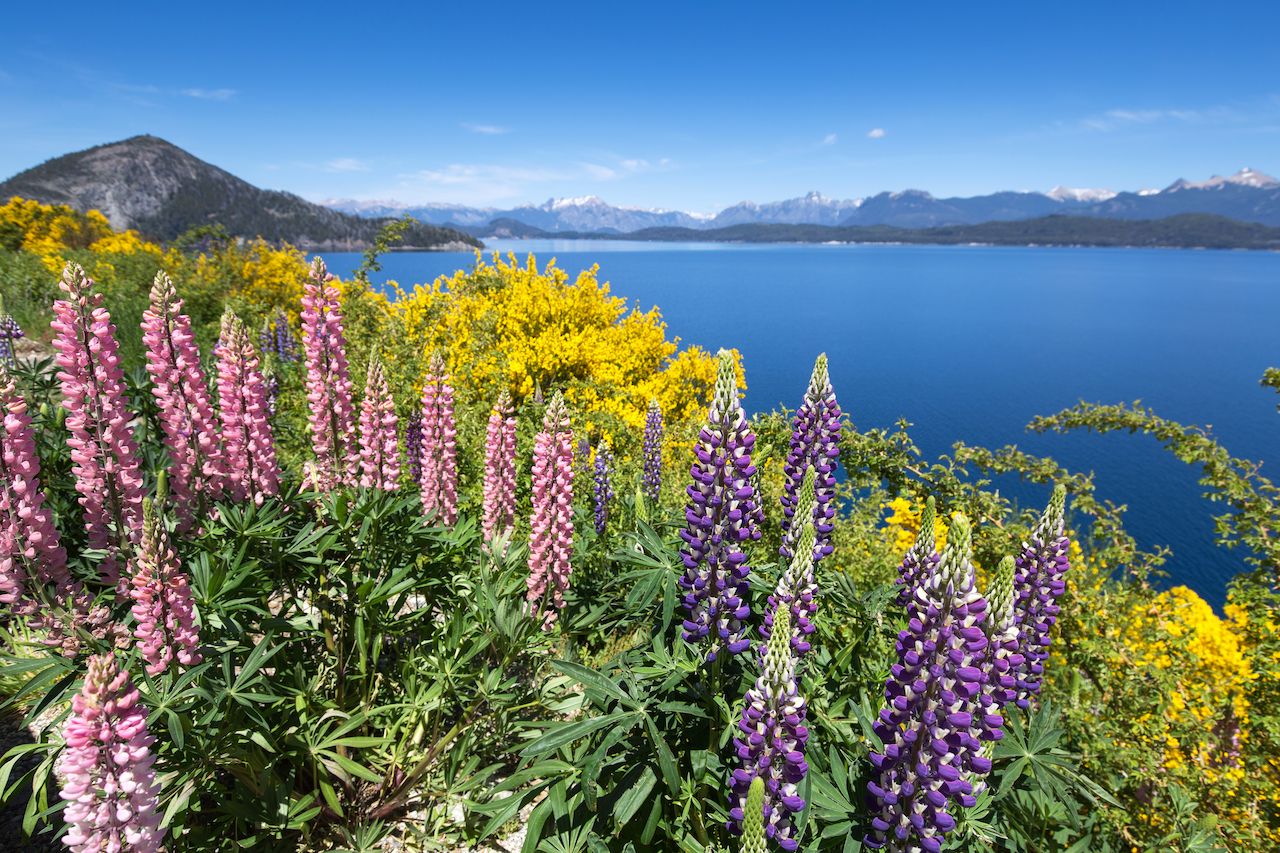 The high hiking season in Nahuel Huapi is during the summer months, from November to February. This peak time is also the busiest, though. For uninterrupted hiking, it’s best to visit during the shoulder seasons in September-October and March-April. If you arrive in September, you may not be able to hike to the refugios, but you’ll have the benefit of catching the end of the ski season.

WildlifeThe Valdes Peninsula is the absolute best place in Patagonia to see wildlife
Tagged
Hiking Parks + Wilderness Trip Planning Argentina
What did you think of this story?
Meh
Good
Awesome

Buenos Aires’ coolest rooftops to go out for a drink

The best spots to watch Argentine tango in Buenos Aires