Ask any Brit what their favorite takeaway spot is and they’re sure to mention Nando’s. Ask them about the origins of Nando’s menu, and they’ll probably say Portugal. It’s a reasonable answer. Its logo is the Rooster of Barcelos, a famous Portuguese symbol. The food is seasoned with Portuguese spices and Portuguese bread rolls are among the restaurant’s many sides. However, to label Nando’s a product of Portugal isn’t strictly true. Nando’s was in fact born in Johannesburg, South Africa, making this beloved fast-casual spot a mashup between Portuguese and African cuisines. Here’s everything you need to know about the origins of Nando’s, and its effort to celebrate and support South Africa.

The complex origins of Afro-Portuguese cuisine

Portuguese cuisine has long been a vital part of Africa’s diverse culinary landscape. In the 15th century Portuguese explorers began their expedition around Africa in search of gold and black pepper. In the early 1500s, Portugal colonized Guinea-Bissau in West Africa and Angola and Mozambique in the south. Tragically Portugese colonial rule resulted in the brutal enslavement of many people native to these countries. While slavery was officially abolished in Africa in 1869, Portuguese colonial rule would continue until 1975.

After Angola and Mozambique gained independence, many Afro-Portuguese people once living in these countries immigrated to Brazil or Portugal but a significant number of refugees also made their way to South Africa. Today, South Africa is home to the largest African Portuguese population in the world. As their community grew, Afro-Portuguese restaurants began to pop up in these areas serving dishes that were popular in their home countries such as prego (steak rolls), espetada (kebab) and, of course, peri-peri chicken.

Peri-peri chicken in particular has sparked much debate over its origins. Some say that the Portugese brought the African bird’s-eye chilli, or peri-peri pepper, to Mozambique from Brazil. Others say it actually first discovered in Zambia and Zimbabwe and brought back to Portugal. While we may never know the exact origin of this spicy capsicum, we do know that it flourishes in a Mozambican climate and is an integral part of African cooking.

The rise of peri-peri chicken 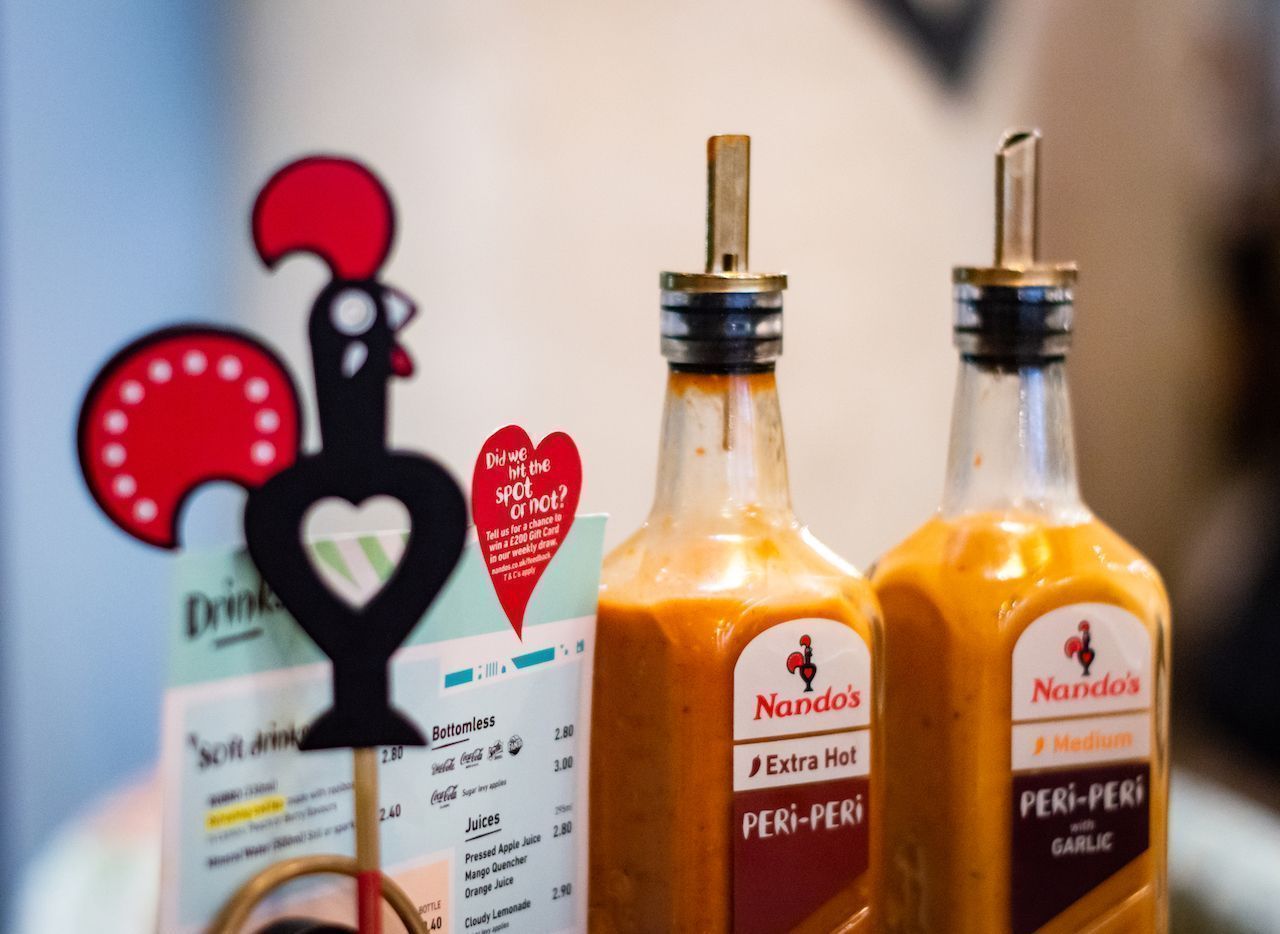 Peri-peri chicken does not only predate Nando’s, it is the reason that Nando’s exists. It is a dish that is neither intrinsically Portuguese nor African yet its significance in both cultures is undeniable. The story of peri-peri chicken’s global takeover begins with two friends looking for a bite to eat.

Back in 1987, two pals visited Chickenland, a so-called “dodgy” takeaway spot in the Johannesburg suburb of Rosettenville. At that time, South Africa was deeply segregated and it was not common for non-Portuguese people to visit this neighborhood. Mozambique-born Fernando Duarte (who is white) introduced his friend, Robert Brozin, a Jewish South African man, to the delights of Portuguese cuisine and Brozin soon fell in love.

Brozin became obsessed with the combination of chicken marinated in peri-peri sauce at Chickenland and knew that the world had to taste this glorious dish. Eventually, Brozin and Duarte bought the little restaurant and renamed it Nando’s, after Fernando’s first-born son. In 1993 the Nando’s chain expanded to the UK and as of 2017, there are over 1,000 Nando’s locations in 35 countries. Nando’s became a celebration of both the Afro-Portuguese community and of South Africa as a whole.

In Portugal, piri-piri chicken (as it is spelled there) is a popular dish, but far less chili is used to season it, making it a much milder version than you’ll find in South Africa. To make Nando’s signature peri-peri sauce, the spicy pepper is infused with salt, garlic, lemon, onion, oil, and vinegar. The chicken is then marinated in the sauce for 24 hours, flame-grilled, and served at your desired spice level.

Another beloved spicy dish in the southern region of Africa is peri-peri chicken livers, usually served with bread to soak up all those glorious peri-peri juices, as well as garlic soaked Mozambican peri-peri prawns. 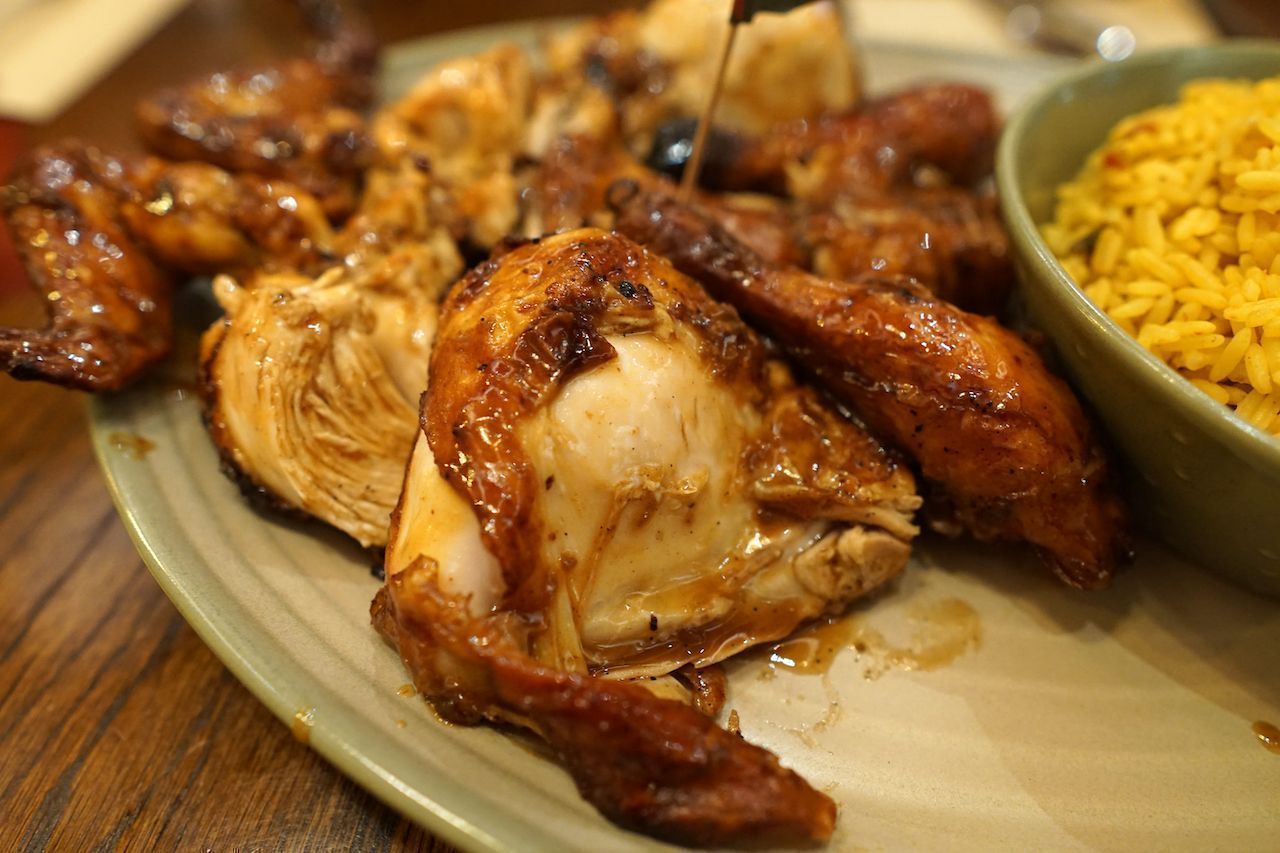 There were, of course, a few challenges for Nando’s before it became the globally recognizable brand it is today. At the time of the restaurant’s inception, South Africa was in political turmoil under the apartheid regime. The founders had little money and no restaurant experience, all they knew was that they loved peri-peri chicken. Thus began the start of Nando’s trademark advertising, which was and continues to be rather controversial.

The aim of Nando’s advertising strategy was not only to highlight its product but to challenge perceptions of South Africa and to speak to current events in a humorous, tongue-in-cheek fashion. It worked. Nando’s advertising has been both criticized and praised for being fearless in tackling taboo subjects around race, religion, politics, and sex. Many of its advertisements have been banned, including one tackling xenophobia, another featuring a puppet modeled after the African National Congress Youth League then-president Julius Malema, and one mocking Robert Mugabe and other well-known dictators.

Nando’s consistently addresses pertinent social issues in South Africa. According to Doug Place, chief marketing officer for Nando’s South Africa, the company is so involved in the country’s politics because no one “loves South Africa like we do.”

Nando’s partnered with the Harambee foundation which aims to solve the youth unemployment crisis. The company is also committed to supporting African designers and artists. In 2018 Nando’s launched “Portal to Africa,” a curated online shopping platform that connects its designers to the interior decorators of Nando’s restaurants around the world. It also hosts the Nando’s Hot Young Designer Talent Search which offers designers an opportunity to showcase their designs with Nando’s and to enter into a year-long mentorship program.

The company is also interested in improving global health. In 2007, Nando’s executives teamed up with South African explorer and philanthropist Kinglsey Holgate to distribute mosquito nets in malaria-endemic regions of Africa. The company has since secured a leading role in the United Against Malaria partnership, launching a bracelet campaign that aims to raise $1 million for the Global Fund to fight AIDS, Tuberculosis, and Malaria.

The next time you eat at Nando’s, remember this fast-casual chain is about more than just delicious chicken: It’s also a celebration of complex African cultures and cuisines, operated by an organization that champions Afro-Portuguese people and their history.

Food + Drink8 Essential Dishes That Show the Diversity of South Africa
Tagged
Food + Drink
What did you think of this story?
Meh
Good
Awesome