If naming a star after your significant other feels too ’90s, NASA is now giving you the opportunity to put their name on a microchip that they will then hurl towards the sun.

This is part of NASA’s historic Parker Solar Probe mission, which will send a small spacecraft directly into the sun’s atmosphere to capture data that will help us better understand the nature of our star.

At one point, the spacecraft will be traveling at 430,000 mph, which NASA says is, “fast enough to get from Washington, D.C., to Tokyo in under a minute.”

In a video featuring Star Trek star William Shatner, NASA explains that this will be the closest any human spacecraft has ever been to the sun. While circling through the star’s corona, the probe will capture information on solar winds and solar energetic particles.

This is a big deal for space scientists, who have been waiting for this kind of mission for six decades, according to a press release. As you might have heard, these particles can affect life on Earth.

“Parker Solar Probe is, quite literally, the fastest, hottest — and, to me, coolest — mission under the Sun,” said project scientist Nicola Fox, of the Johns Hopkins Applied Physics Laboratory, in the press statement. “This incredible spacecraft is going to reveal so much about our star and how it works that we’ve not been able to understand.”

In order to survive the sun’s heat, the solar probe will be outfitted with a special 4.5 inch-thick carbon-composite shield capable of withstanding temperatures up to 2,500 degrees (F).

NASA is inviting you to submit your name what it has called “Hot Tickets,” or a space for your name on a microchip that will be placed on the spacecraft.

The tickets are free, but you have to submit your application before April 27th. 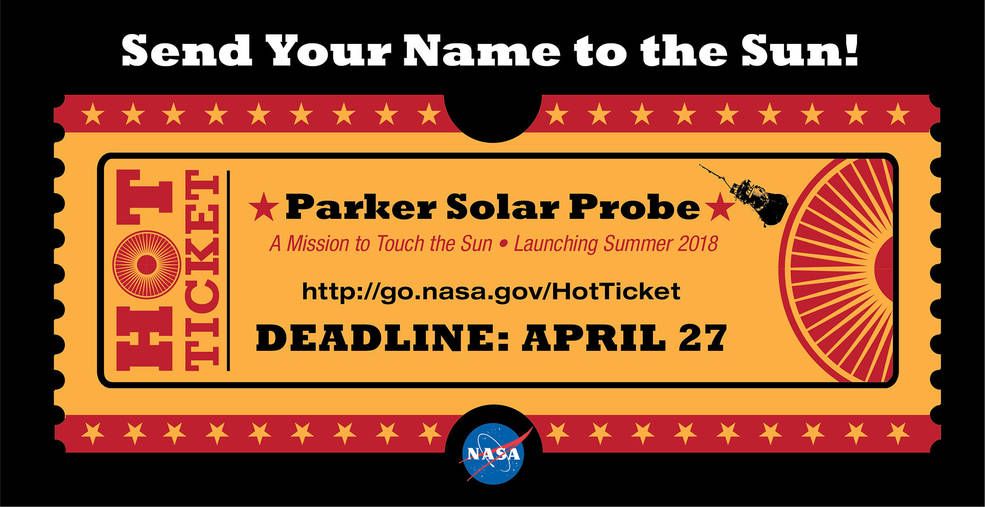