NASA’s Hubble Telescope has time and again managed to blur the line between our perceived vision of the galaxy and what is actually there. There are certainly more questions than answers, but one thing we’ve learned is that we’re just a small blip on the galactic radar. Perhaps no image illustrates this better than the Hubble’s famous “Pillars of Creation” photo, captured in 1995.

The image strikes the imagination like Harry Potter, showing three massive plumes of gas towering into the sky surrounded by stars of varying levels of brightness. What you’re seeing in the image is located in the Eagle Nebula some 7,000 light-years away.

The original Hubble photo captured the pillars in infrared light, which is invisible to the human eye, and has been brought into focus by NASA scientists. The infrared image allows stars behind the pillars to shine through.

“At the top edge of the left-hand pillar, a gaseous fragment has been heated up and is flying away from the structure, underscoring the violent nature of star-forming regions,” the agency said via Hubblesite, the digital hub for fans of its famed telescope. New stars are also forming in the nebula, surrounded by older stars shining bright in both the infrared and visible light images. These new stars are forming at the top, made of cool interstellar hydrogen gas. 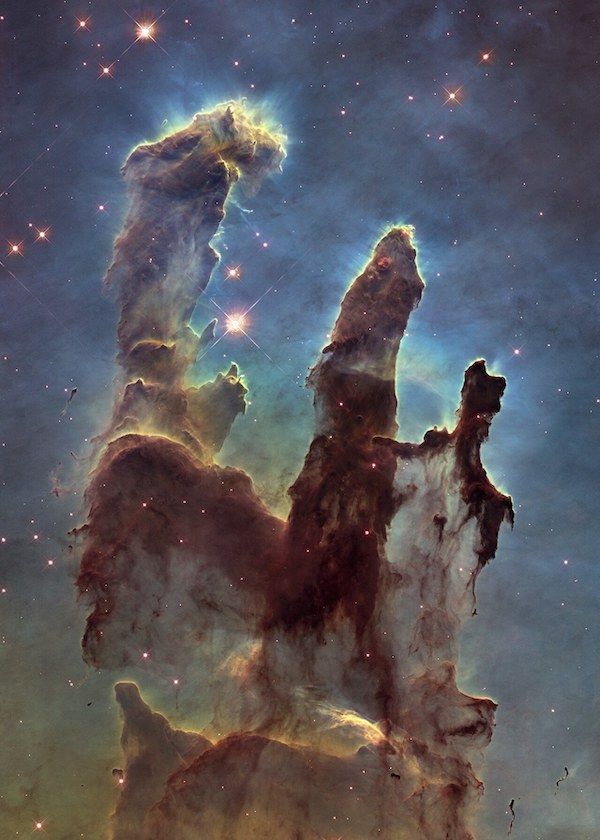 In 2014, the Hubble Telescope shot the same spot with upgraded equipment. Most notably for us, it took a photo in near-infrared light, and the result may be even more striking. The pillars seem to be surrounded by a bright blue sparkle that emanates outward. NASA described this as “intense ultraviolet radiation from a cluster of young, massive stars and evaporating away into space.” Staring at the photo, we’re having a tough time not getting lost and following suit.

AstronomyThese Constellations Are in Full Force This Spring. Here’s When To Watch Them.
Tagged
Astronomy News
What did you think of this story?
Meh
Good
Awesome