It may be the UK’s third-largest city, but Manchester is more than just hipster bars, glitzy restaurants, and packed shopping streets. Hop on a bus or train, and within half an hour you’ll have reached brooding moorlands, vast country estates, and picturesque villages.

Many of these rural attractions are owned by the National Trust, Europe’s largest conservation charity. Heading into its 125th year, the organization is devoted to protecting some of the UK’s most spectacular historic houses, woodlands, gardens, countryside and stretches of coastline. If you prefer ancient deer parks, centuries-old mansions, and beautifully preserved industrial heritage to cityscapes, head to these seven National Trust properties within easy reach of Manchester.

Should I join the National Trust as a tourist?

The National Trust offers a variety of memberships that include free entry to more than 500 properties across the UK, priced from six British pounds ($7.80) per month for individuals aged over 26. Discounts are available for two adults living at the same address, families, young people (aged 18-25), and juniors (5-17). Under-fives get in free. All memberships are annual, so unless you’re visiting for several weeks over the course of a year, it’s probably best to just pay at the door. Prices vary from location to location but start at around £6 for adults. Alternatively, US residents can join the Royal Oak Foundation — the National Trust’s American affiliate — to receive unlimited free access to all National Trust sites. Prices start at $80 for 12 months. 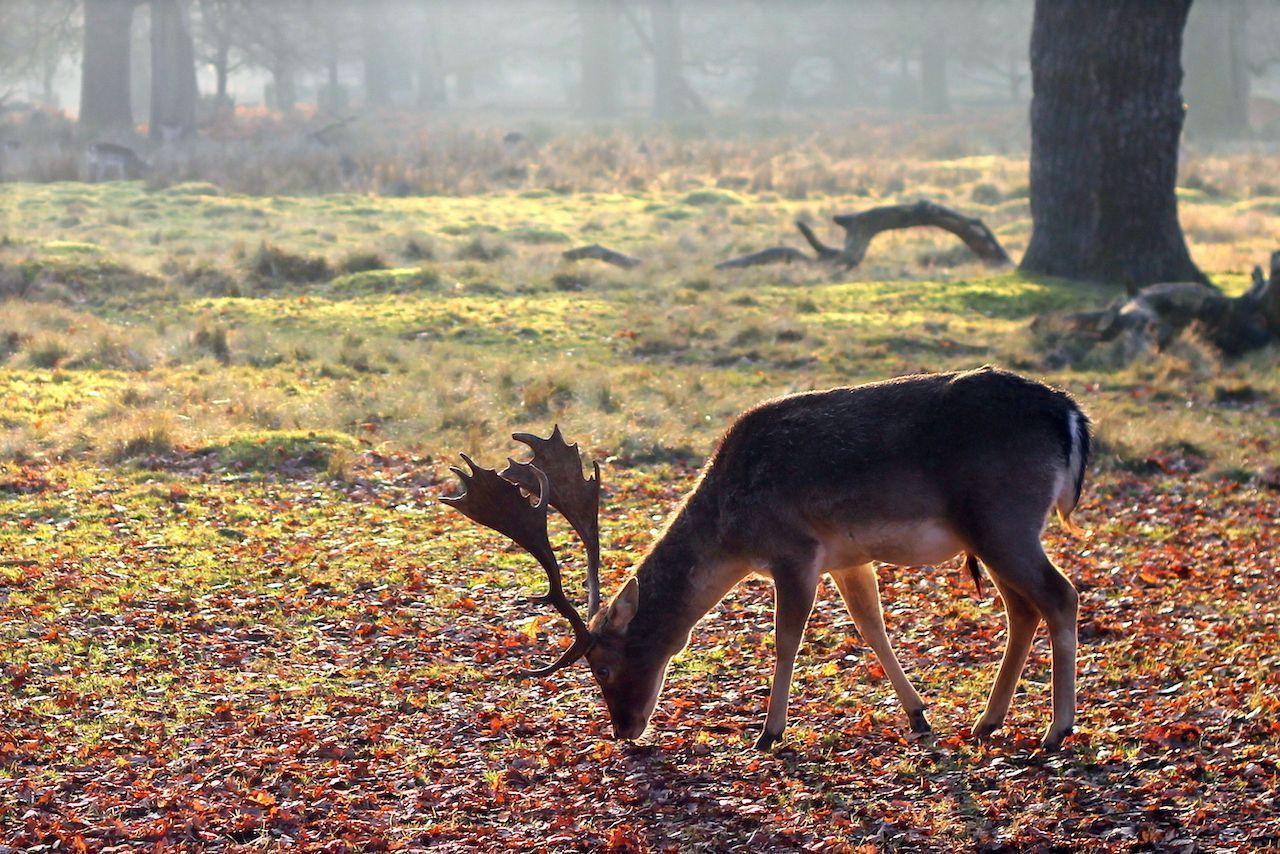 Perched midway between Manchester and the industrial town of Warrington, Dunham Massey is a green oasis housing vast gardens and sprawling woodlands of ancient trees. At the heart of the site is Dunham Massey Hall — an imposing Georgian mansion. During World War I, the property was repurposed as a military hospital; 282 wounded soldiers were treated here between 1917 and early 1919. The house is a major draw in its own right; the red brick facade — a common feature of grand historic buildings in northwest England — is punctuated by window bays and a striking gray stone centerpiece. But the real star of the show is the surrounding greenery. The gardens are home to more than 700 plant species while the 300-acre parkland is occupied by Dunham Massey’s resident herd of fallow deer. The 18th-century stable block has been transformed into a restaurant that serves a variety of local seasonal specialties — think warming stews, casseroles, and jacket potatoes.

The property is best reached by road. Buses from Altrincham (in Greater Manchester) to Warrington stop outside the gates. Alternatively, drivers can reach Dunham Massey in around 45 minutes from central Manchester. Different entrance fees apply for different parts of the property, with prices starting at £11 ($14.30) for adults and £5.50 ($7.15) for children. 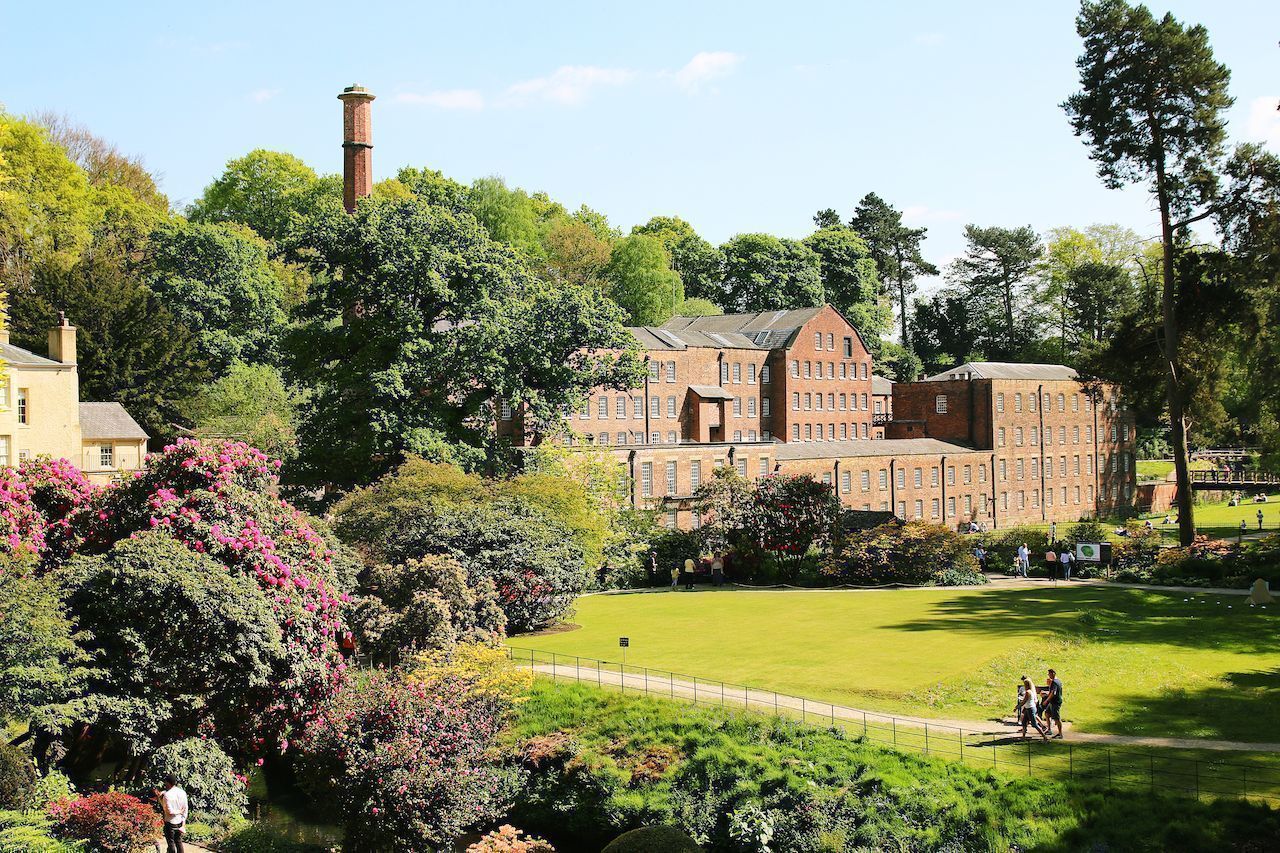 Quarry Bank, one of Britain’s best-preserved industrial heritage sites, is just a stone’s throw from the noise and traffic of Manchester Airport. Visiting this historic space is like stepping back in time to the Industrial Revolution. Looming out of the surrounding woodland is a beautifully preserved cotton mill, once driven by the waters of the River Bollin and the labor of a small army of workers. Some of the machinery still functions to this day — hearing the deafening clatter and floor-shaking power of the looms and spinning machines provides a stark insight into the terrifying conditions of the 18th- and 19th-century industrial workforce.

But Quarry Bank offers much more than a snapshot of Britain’s industrial past. Close to the mill lies Quarry Bank House, once home to the family of Samuel Greg, the factory’s founder. It is bordered by picturesque sloping gardens that provide impressive views over the wooded valley floor. The restaurant, located in the original weaving shed, offers a range of light bites and hot meals, many made with ingredients grown in the onsite garden.

Quarry Bank is easily reached by train from Manchester; services to nearby Styal station leave Manchester Piccadilly roughly every half-hour. Admission to the property costs £20.25 for adults ($26.50) and £10 ($13) for children. 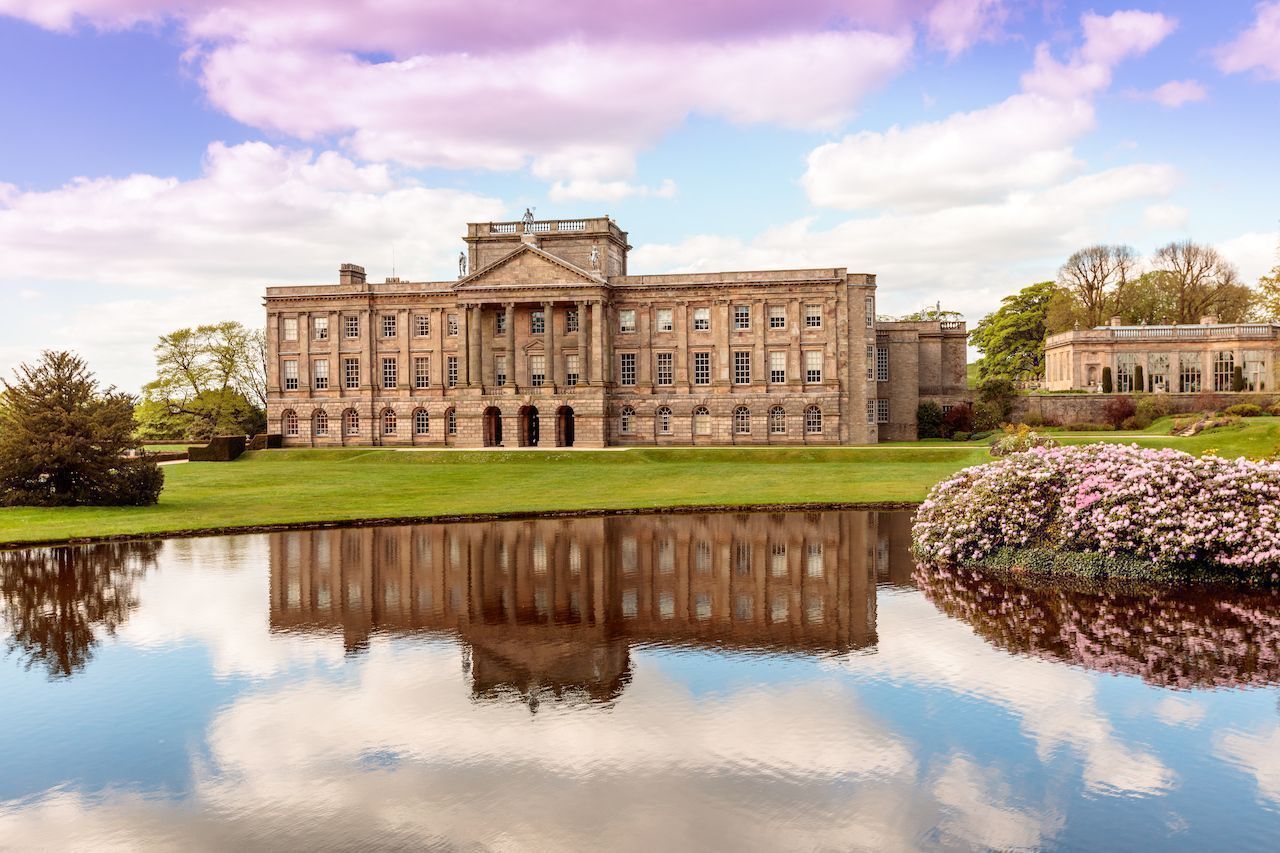 Lyme Park, on the edge of Peak District National Park, is comprised of a lavish country house and expansive estate. Once home to the wealthy Legh family, the property is set within 1,300 acres of land, dotted with herbaceous borders and wild, rolling moors. The house — the largest in all of Cheshire — is vast and imposing, built from gray sandstone and Welsh slate. Perhaps the most impressive view of the property can be enjoyed from the south of the building; its giant columns and triangular pediment are reflected in the pond below. The interiors are lavishly decorated — all dark wood paneling, wide-open fireplaces, and ornate gilded chandeliers. In the basement sits the Ale Cellar restaurant, which, as the name suggests, was once the spot where the Lyme family’s ales were left to mature.

Lyme Park is easily accessed by rail, with regular trains running from Manchester Piccadilly to Disley station, just half a mile from the property’s main entrance. A choice of entrance tickets is available, offering access to either the gardens or house, or to both. Prices for the house and gardens combined cost £14.50 ($18.90) for adults, £7.25 ($9.50) for children and £36.25 ($47) for families. 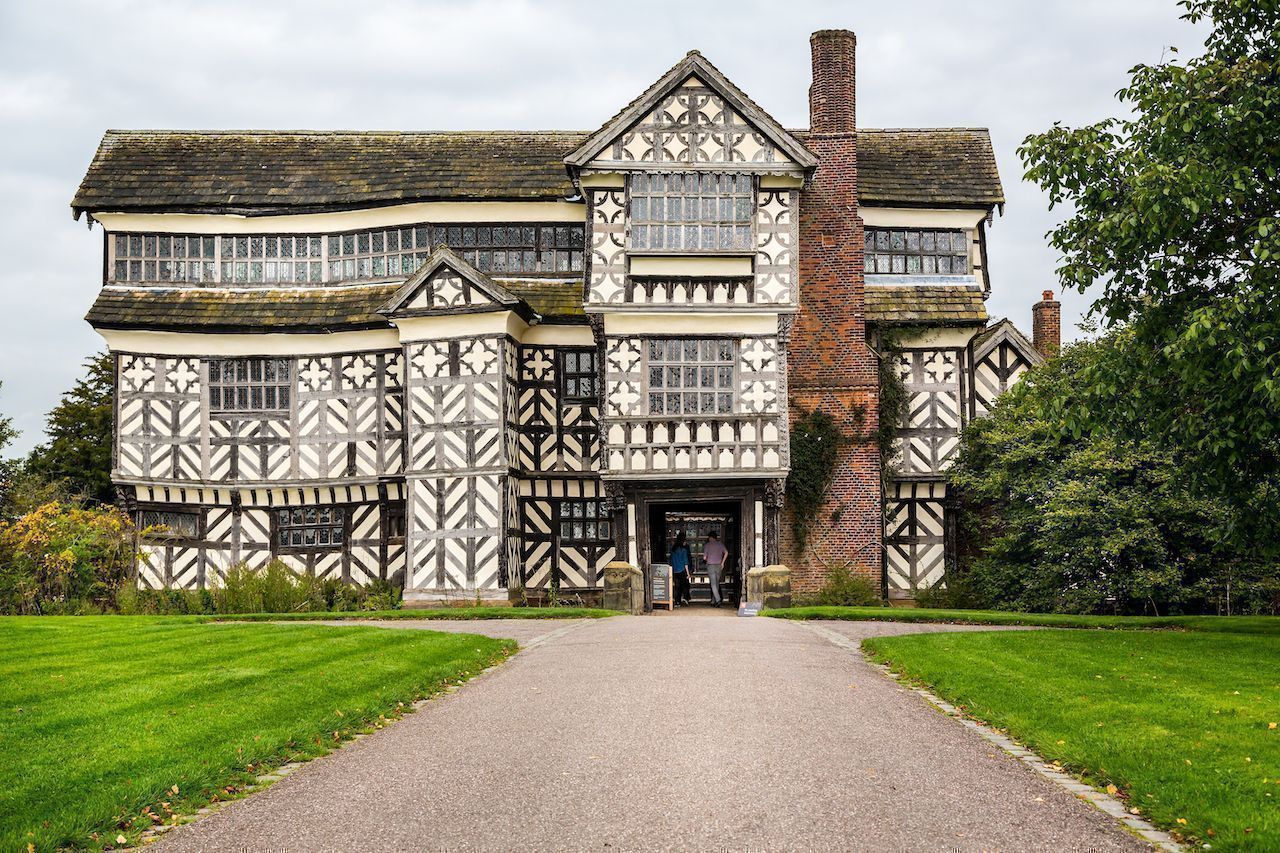 Little Moreton Hall has to be seen to be believed. Dating back to the early 16th century, the Tudor manor house looks like it was erected upside down. Each of its two upper stories is wider and taller than the one beneath, giving the impression of a building poised to topple over at any moment; that it remains standing is testament to the artisans who built the property over the course of 100 years. Adding to the house’s fantastical feel, it is located on an artificial island surrounded by a 33-foot-wide moat, thought to have been dug as much as 300 years before the construction of the present-day building.

To the rear of the property is a beautifully manicured garden in which herbs and vegetables, once used for cooking and medicine, still grow to this day. Produce from the garden is used at the onsite cafes, Mrs. Dale’s Tea Room and The Little Tea Room. Given its somewhat remote location, Little Moreton Hall is best reached by car; the drive takes around an hour from Manchester city center. Standard tickets cost £12 ($15.60) for adults, £6 ($7.80) for children, and £30 ($39) for families. 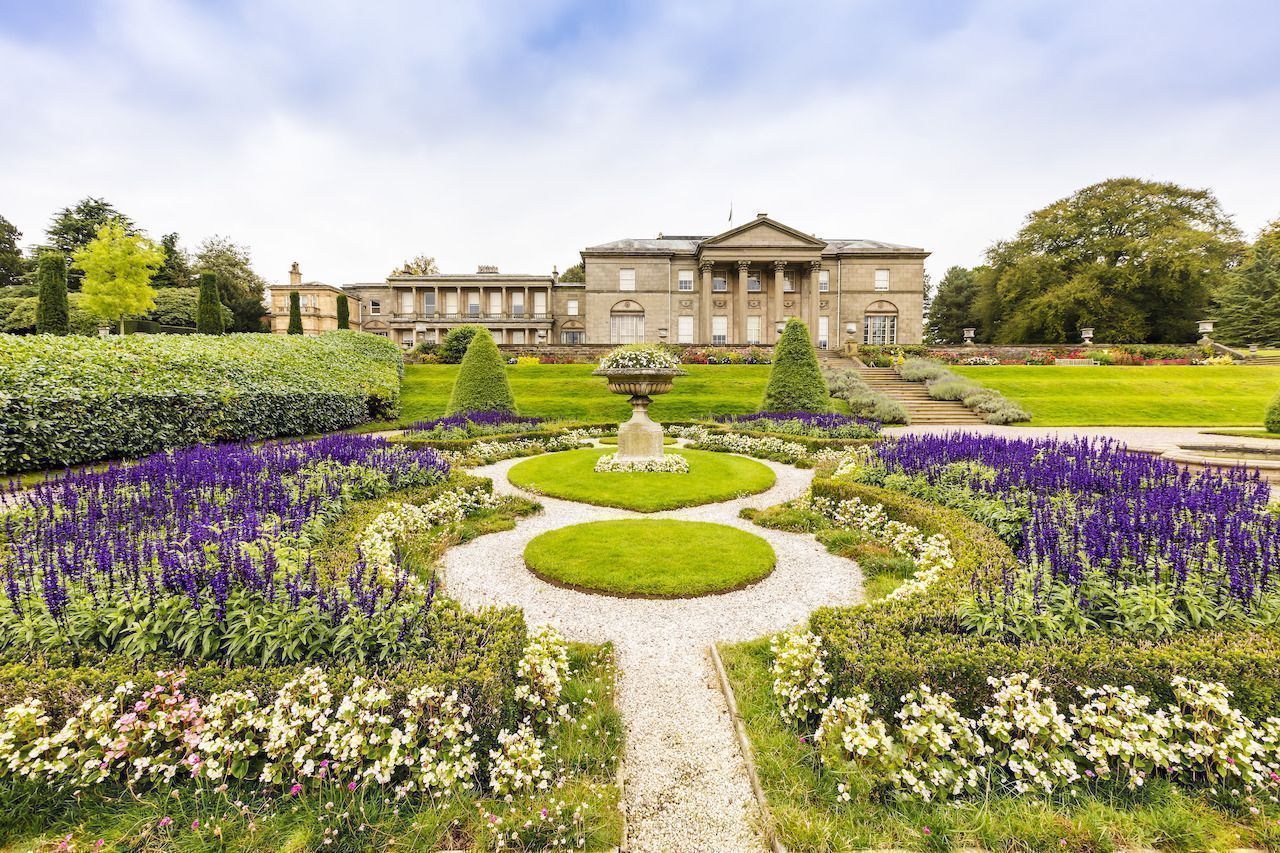 Home to a branch of the aristocratic Egerton family for almost 400 years, Tatton Park has a suitably opulent mansion set in 50 acres of landscaped gardens and bounded by 1,000 acres of deer park. The house is situated on an elevated spot that affords views of the lower-lying parkland while its striking southern frontage — replete with four towering columns and a triangular portico — dominates the center of the estate. Within the mansion’s walls are ostentatiously decorated rooms, including a library with more than 8,000 books — one of the National Trust’s most important literary collections. Visitors can also head “below stairs” to explore the kitchen, salting room, scullery, and wine cellar, which were once the domain of the Egerton family’s many servants. The property’s former stableyard has been converted into a shopping and dining hub with a restaurant, tea room, and three shops selling a wide range of local produce.

Tatton Park is two miles from the nearest train station and bus stop (both in Knutsford), so it’s best reached by car. The drive takes around half an hour from central Manchester. A variety of ticketing offers are available, allowing access to different parts of the site. Alternatively, passes for the whole property cost £13 ($17) for adults, £7 ($9.10) for children aged 4-15, and £33 ($43) for a family of two adults and up to three children. 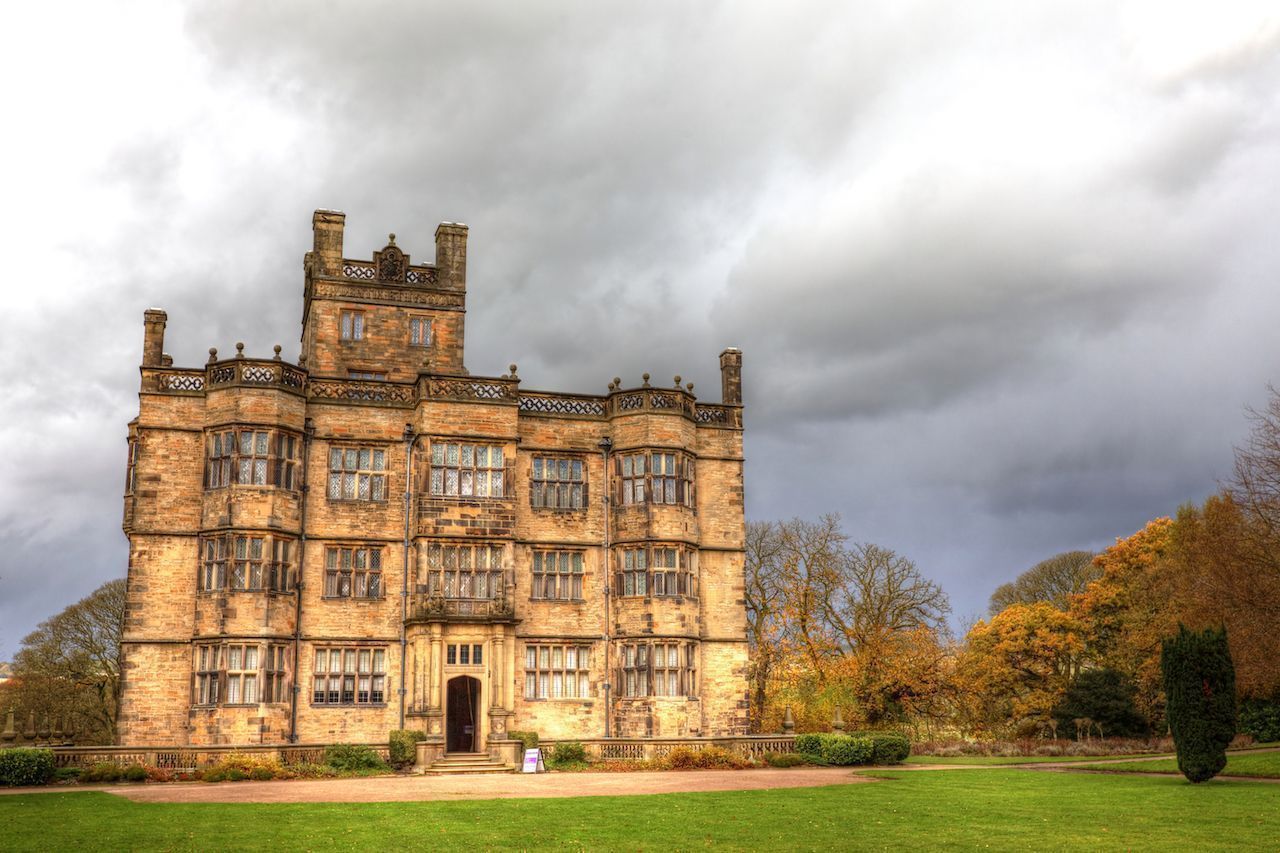 During the Industrial Revolution, Burnley was one of England’s most important mill towns and a major global center of engineering. It’s still home to former manufacturing buildings and rows of terraced properties built to house mill workers. Yet on the town’s outskirts lies the beautiful Elizabethan country house of Gawthorpe Hall. With its striking central tower, formal gardens, and wild woodlands, it feels a world away from Lancashire’s industrial heartland. While it dates back to the 1600s, the mansion was extensively renovated during the 19th century by Sir Charles Barry, designer of the Houses of Parliament and Highclere Castle — better known as the setting of TV period drama Downton Abbey. Its hall has the largest collection of paintings on loan from the National Portrait Gallery to be found anywhere in northwest England.

Given its proximity to Burnley, Gawthorpe Hall is easily reached by public transport. Trains run from Manchester Victoria to Burnley Manchester Road — a journey of around 45 minutes — while frequent buses operate between Manchester Chorlton Street and Burnley bus station. Admission costs £6 ($7.80) for adults and £4 ($5.20) for concessions. 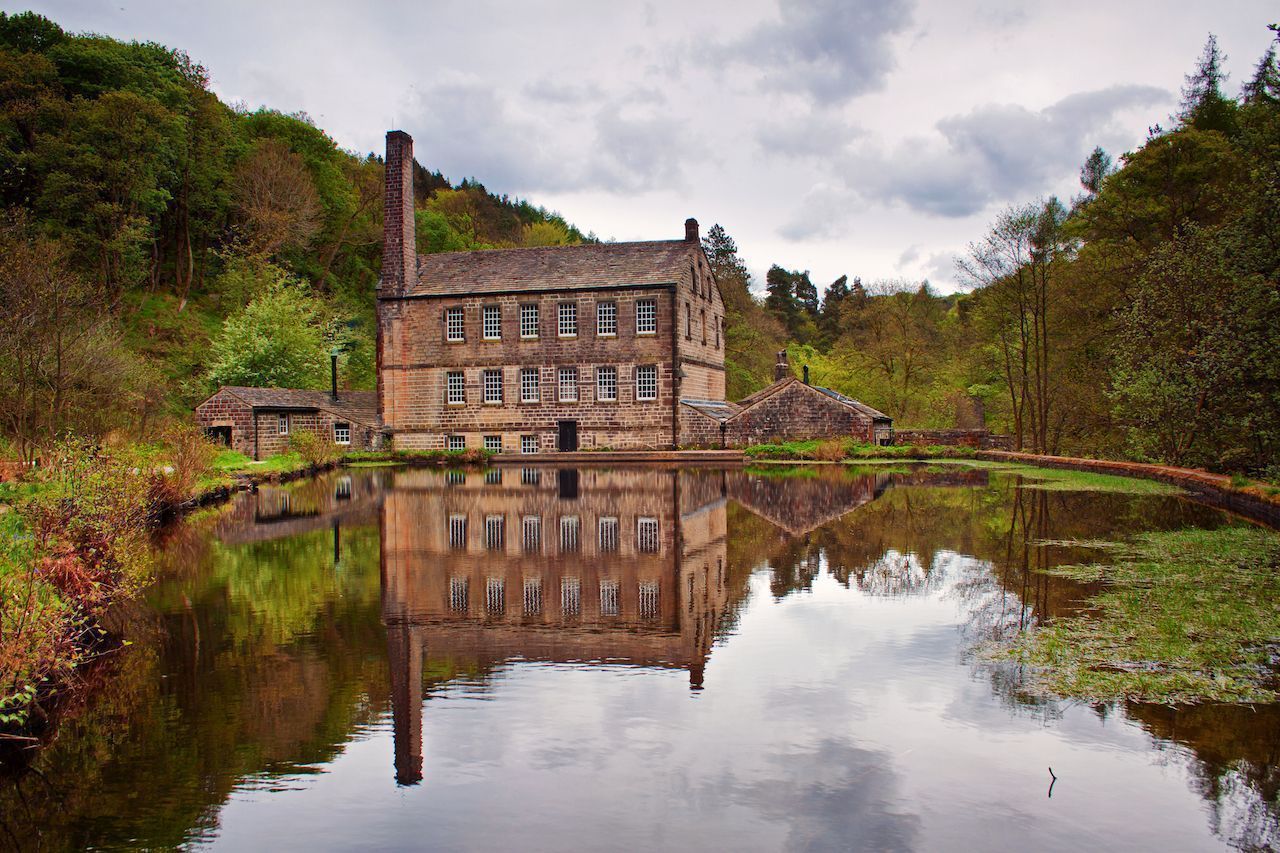 Up in the Pennines, the range of hills and mountains that separate northwestern England from Yorkshire, stands Hardcastle Crags. This 400-acre spot is crisscrossed by 15 miles of footpaths that weave between its babbling streams, crashing waterfalls, deep ravines, and rugged woodlands. At the center of the valley is Gibson Mill, one of the first mills of the Industrial Revolution. Its slate-gray walls and towering chimney stack cast a spectacular reflection onto the still gray waters of the millpond below. The building has a unique claim to fame, being the only National Trust property not connected to the national electricity grid. As such, it has become the organization’s flagship building for sustainability. Gibson Mill also houses the Weaving Shed Cafe, which serves ethical and locally produced food.