New England is fall central. Every year when the temperature drops, visitors come in droves to see the region’s trees put on their most colorful show, changing their leaves from vibrant greens to soothing yellows, oranges, and reds. The spectacle is a great way to reconnect with nature and celebrate the new season, but as it turns out, looking at nothing but dying leaves for days on end can be a tad monotonous — you might want to add a new treasure hunt to your fall foliage road trip. In between collecting fallen maple leaves, look for some of the most romantic covered bridges in New England.

No one really knows the origins of covered bridges — some say the roof was meant to protect the wood from rotting or the frost in winter, or even to ease the passage of fearful animals over a river — but we know for sure that they were all the rage in 19th-century America. There are almost 200 of these wooden structures spread among Maine, New Hampshire, Vermont, Massachusetts, Connecticut, and Rhode Island, and they make for fun visits and great photo opps — especially when the background is a lovely shade of gold.

The best of Maine’s covered bridges 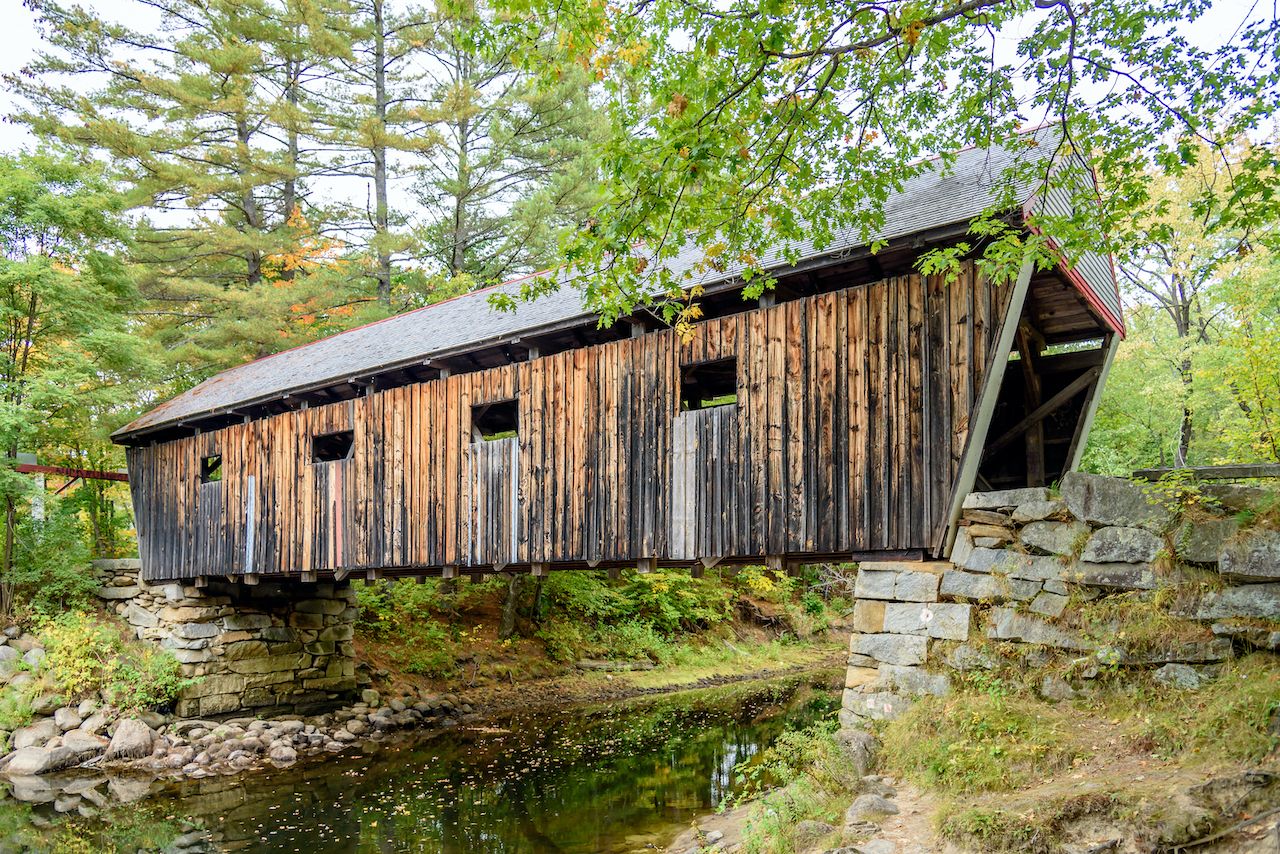 While there used to be 120 covered bridges in Maine, only nine remain today. To see a sample of these, start with Lovejoy Bridge in South Andover in the eastern part of the state, close to the border with New Hampshire. Although it is the shortest covered bridge in Maine (70 feet), it does not lack charm. The 1868 creation has a trapezoid shape, and its entrances are topped with white and red gables that add a touch of color. You can drive across Lovejoy Bridge on your way to Maine’s most famous covered bridge — Sunday River Bridge — only 20 miles south. 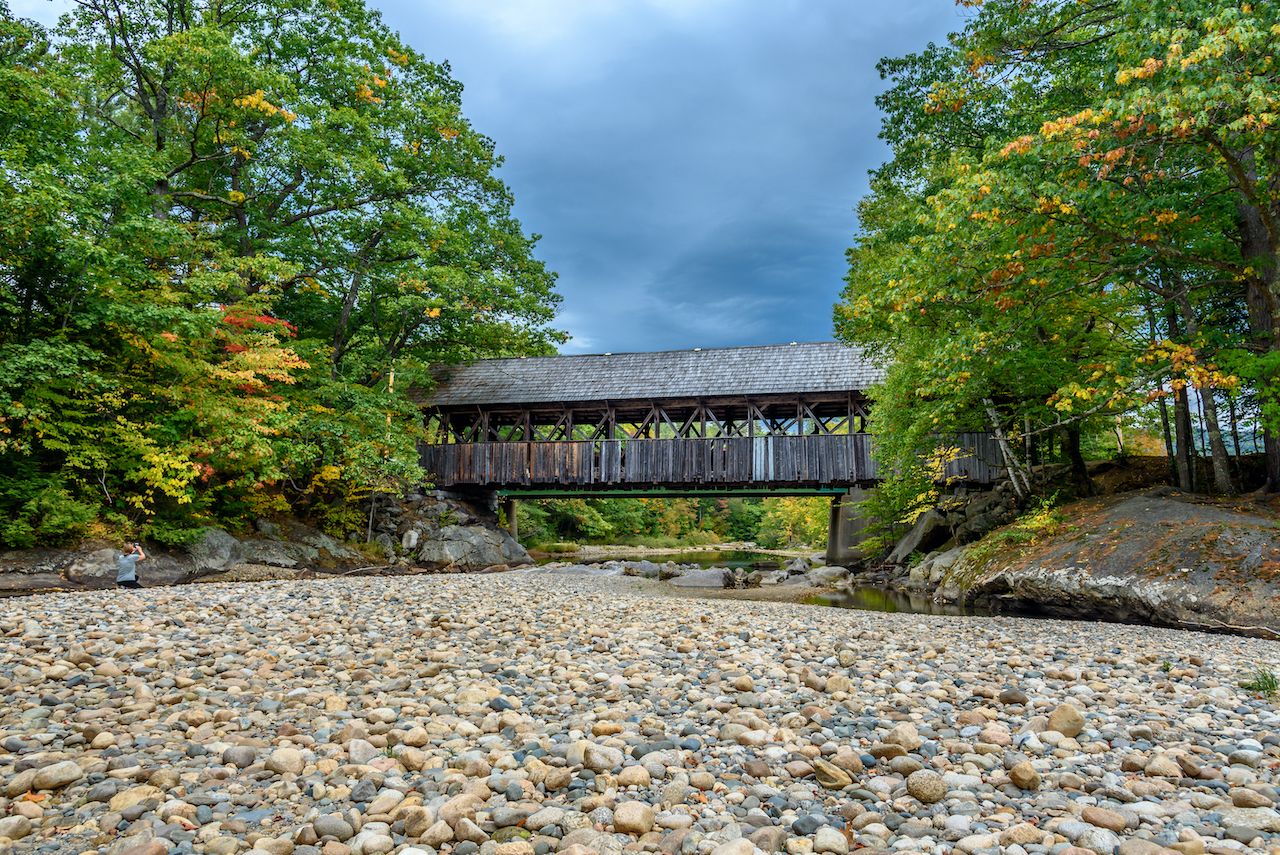 Sunday River Bridge, also known as Artist’s Covered Bridge, was built in 1872 and located in Newry. The bridge crosses the Sunday River and is nicknamed the Artist’s Covered Bridge because it is believed to be the most photographed and painted covered bridge in Maine. You can walk the 87 feet across the bridge and admire the view from up there, as well as the special architecture known as the Paddleford truss, but there’s no driving on the structure. 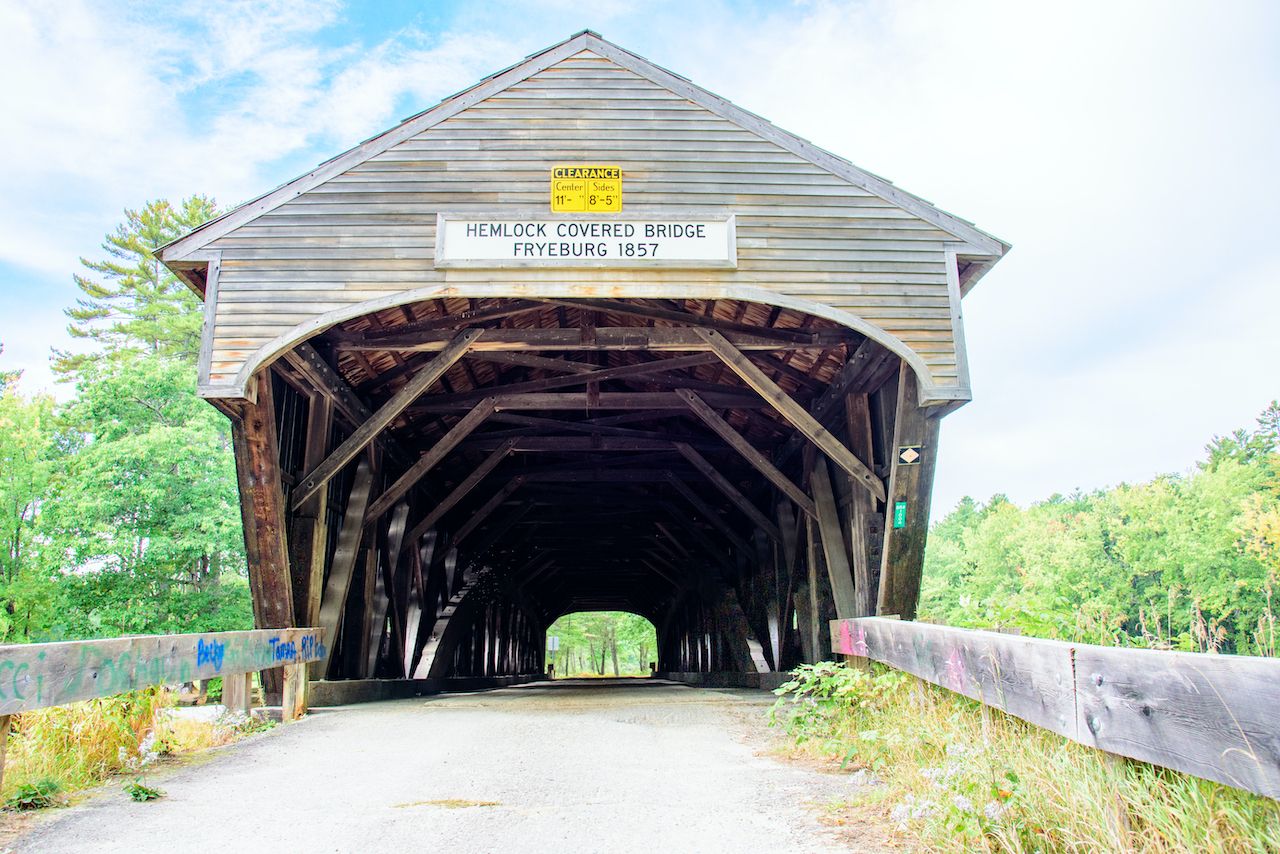 Make your way south for about 40 miles to check out Hemlock bridge. The 109-foot long bridge was built in 1857, and you can drive over it before making your way into New Hampshire just a few miles east. 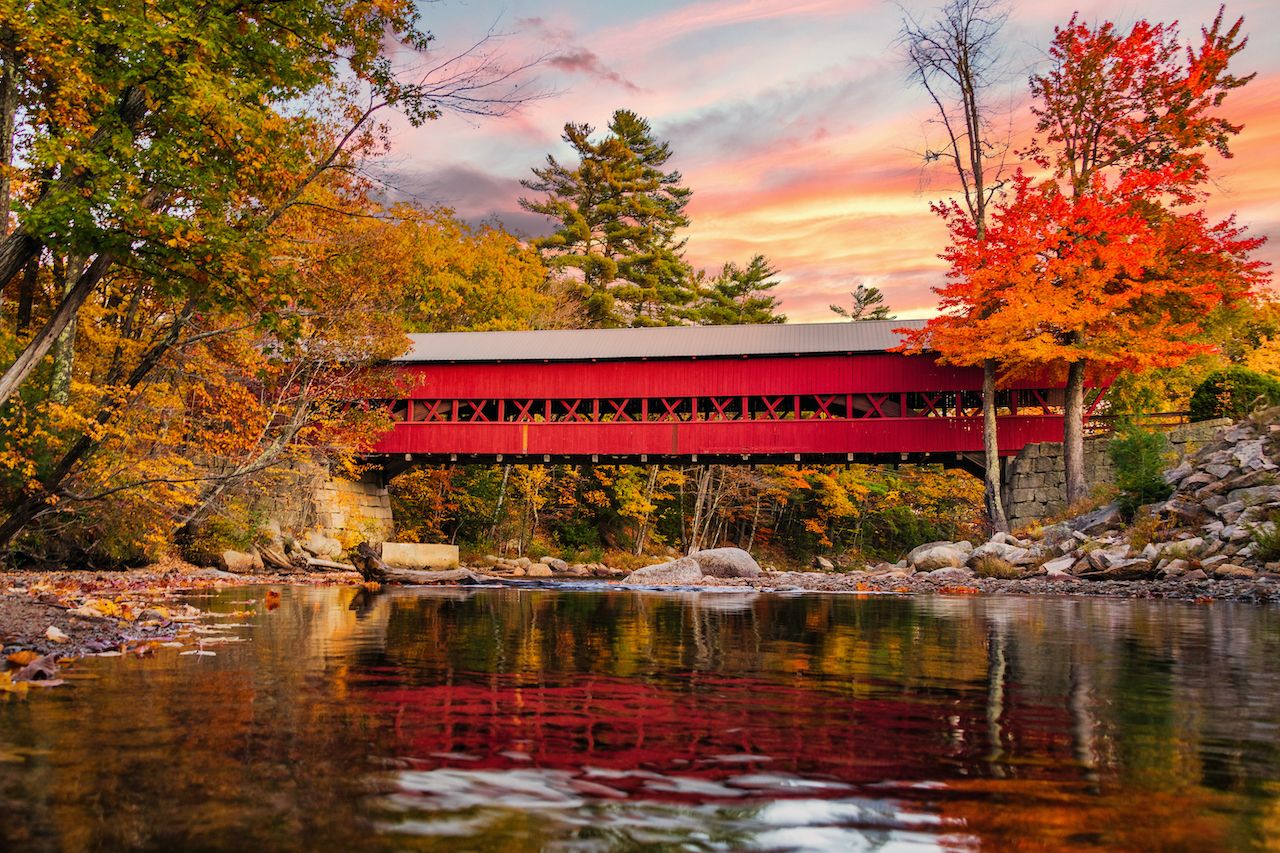 There are a total of 54 covered bridges in New Hampshire, and you could spend a couple of weeks driving around the state trying to see them all. To get the highlights, start with Swift River Bridge, located just 35 minutes away from Hemlock bridge across the state border in Maine. This beautiful bridge, painted a vibrant red, is 133 feet long and has a unique past. Nineteen years after its construction, in 1869, it was swept into the Swift River and went downstream to crash into the Saco River bridge. Swift River Bridge was later rebuilt using the debris from both structures. 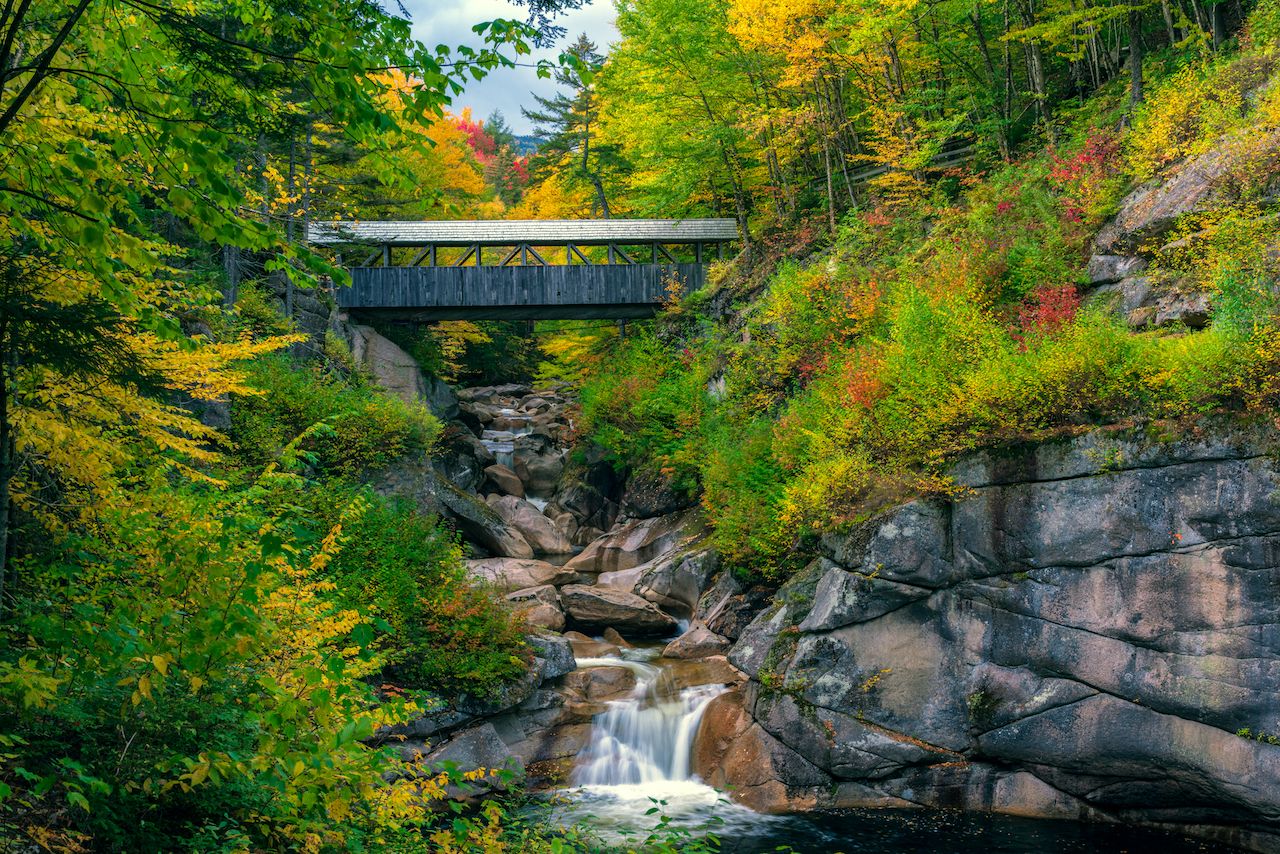 Forty miles east of Swift River bridge is another eye-catching covered bridge, but this one is not a 19th-century creation. Built in 1939, the Sentinel Pine Bridge is located within the Franconia Notch State Park and is only used by those hiking the Flume Gorge Trail. It was named after a 90-foot pine tree that used to stand there and was built for the purpose of protecting the remains of that tree that was blown in a storm in 1938. 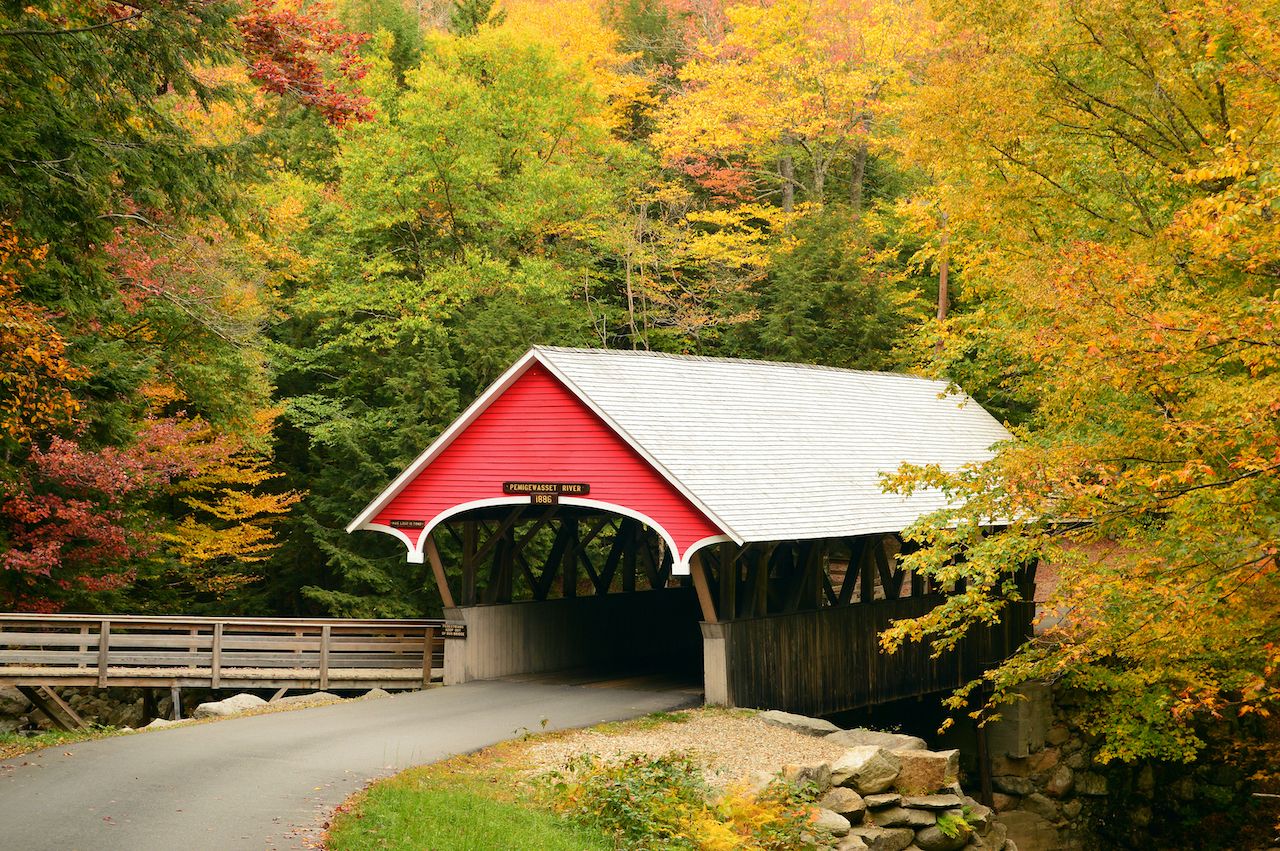 Alternatively, if you’re not into hiking but are in the area around Franconia Notch State Park, check out Flume Bridge just a few minutes away from Sentinel Pine Bridge. Built in 1871, this 50-foot long bridge above the Pemigewasset River is as romantic as covered bridges get and is easily accessed by car. 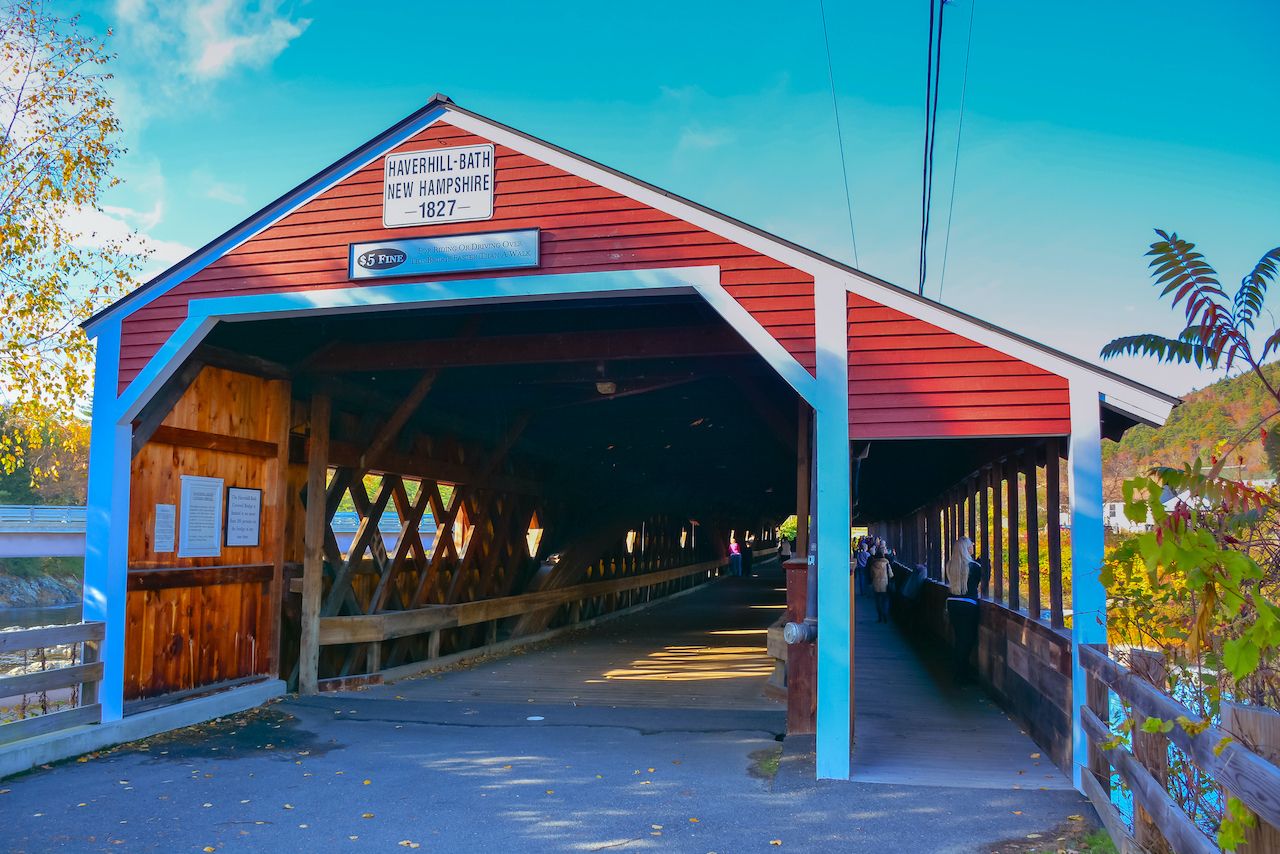 Forty-five minutes further east, on the border between New Hampshire and Vermont, is 1829 Bath-Haverhill Bridge above the Ammonoosuc River. It’s the oldest covered bridge in use in the state, and you can drive across it to follow Route 135.

The best covered bridges in Vermont 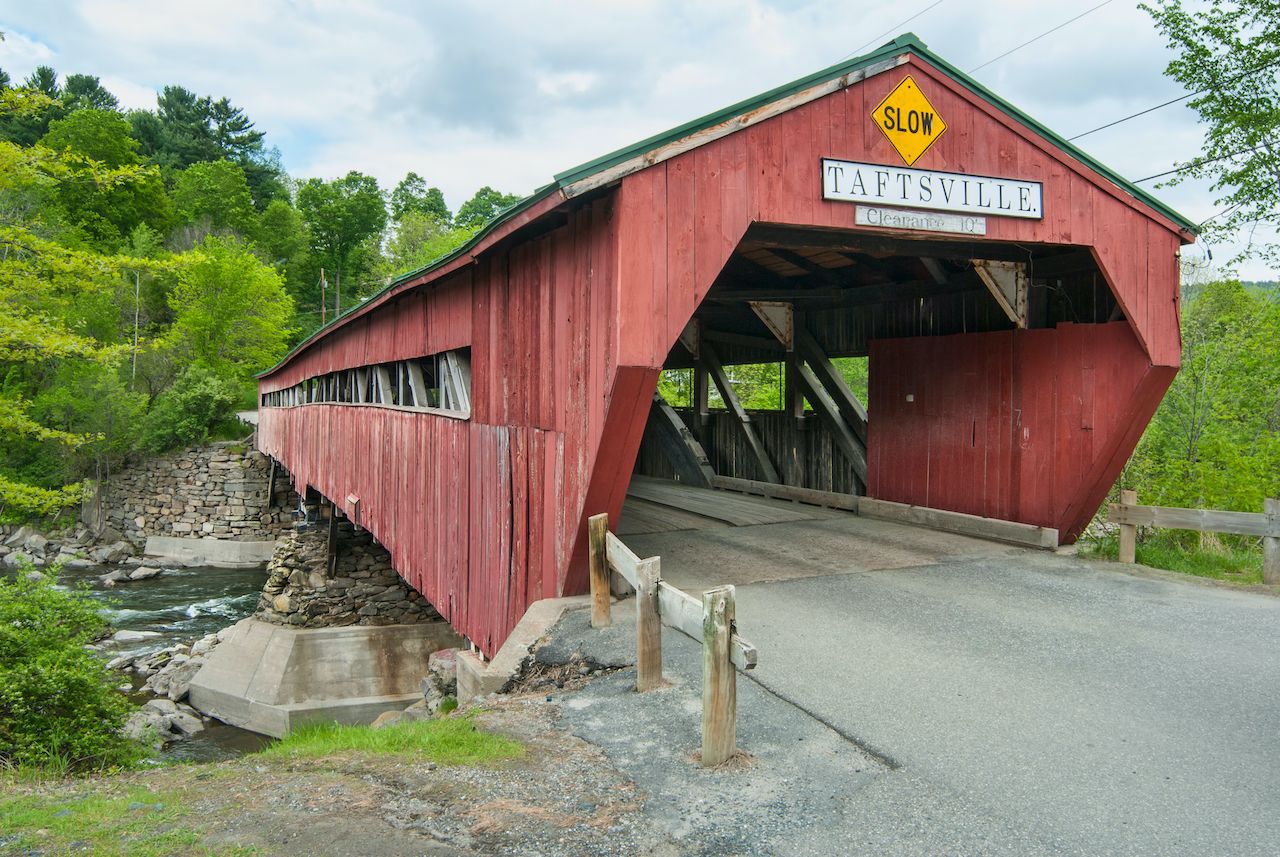 There are 104 covered bridges in Vermont — way too many to see during a short getaway. To see some of the most scenic and historically significant bridges in the state, start with the town of Woodstock, one hour southwest from Bath-Haverhill Bridge. 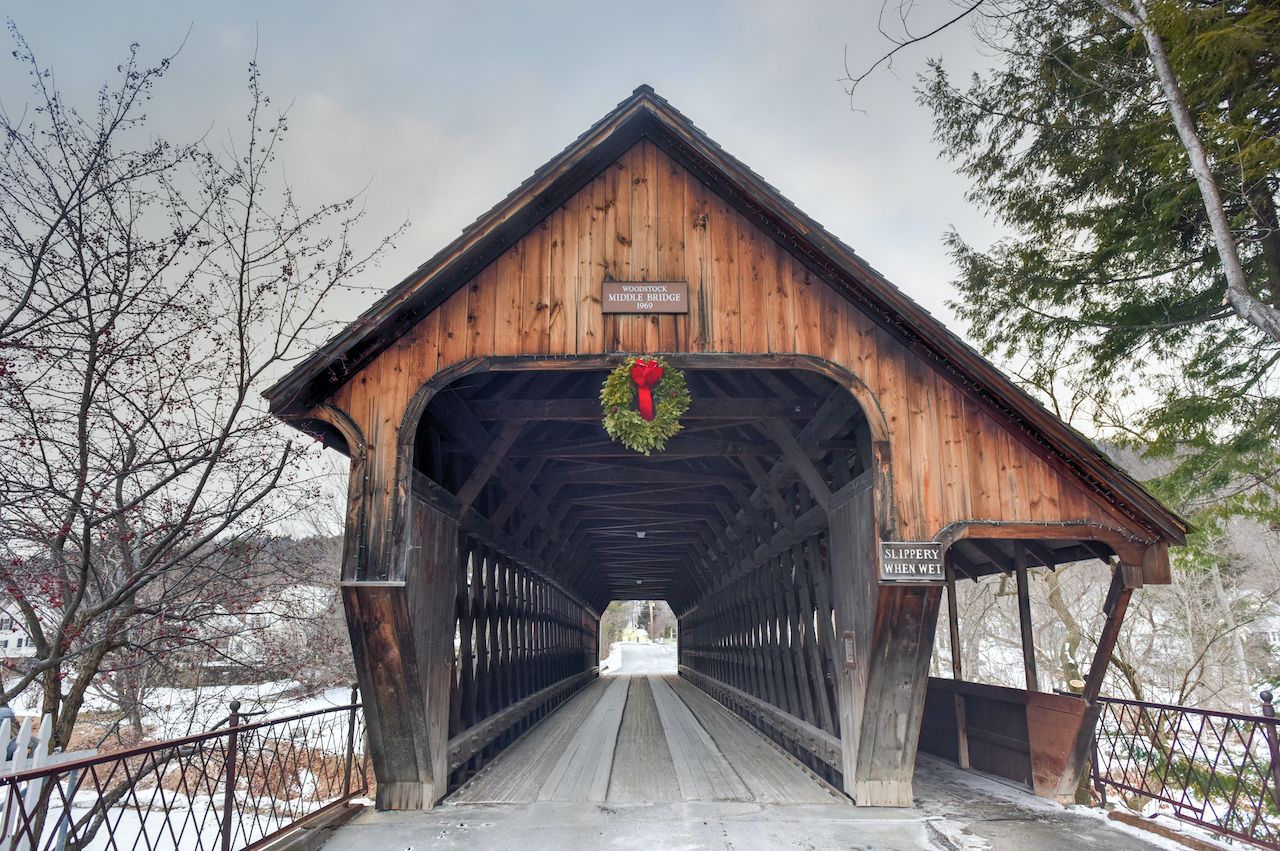 Several stunning covered bridges can be found in the area, so you can check three off your list by driving around a little. The famous red Taftsville and Middle Bridges are right in town, and you can walk, cycle, or drive across them. 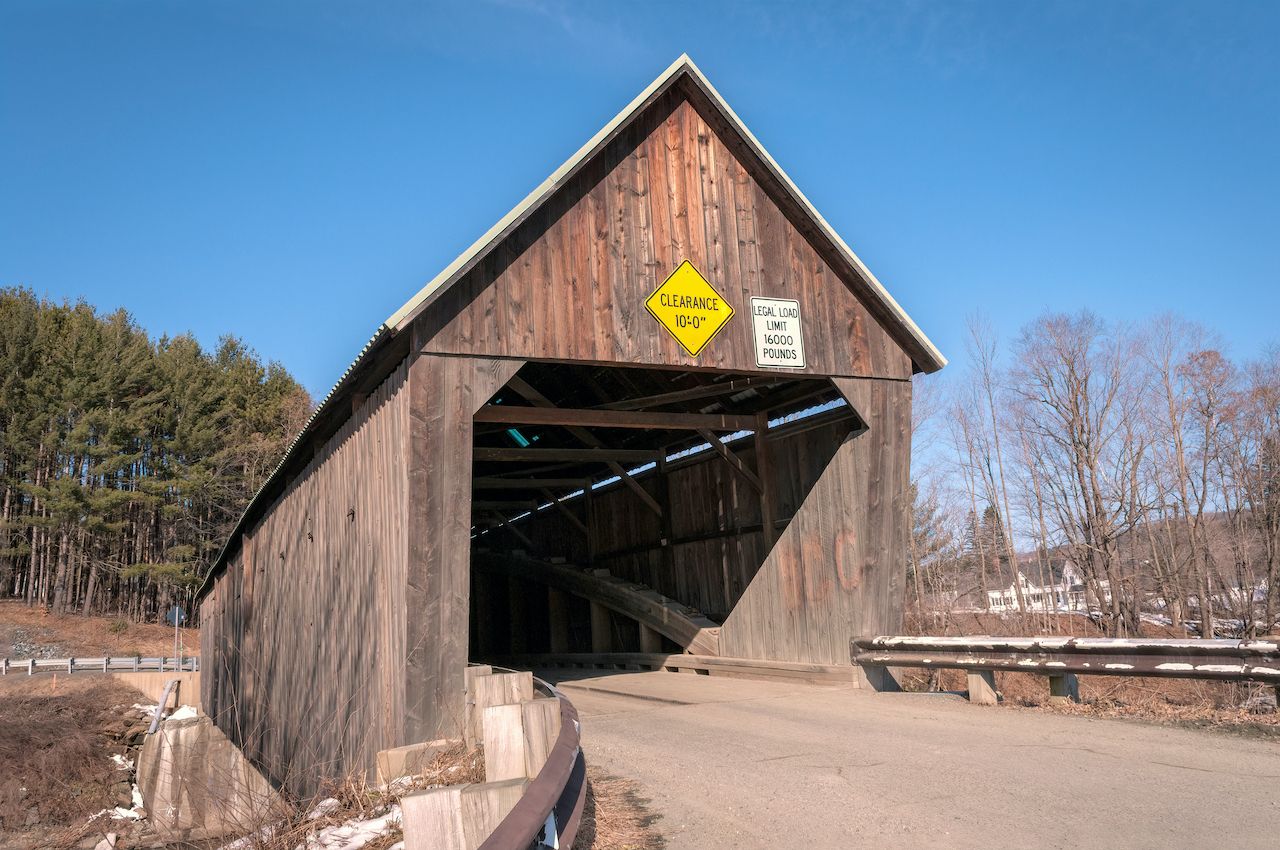 The 136-foot long Lincoln Bridge over the Ottauquechee River in West Woodstock is fewer than 10 minutes away. 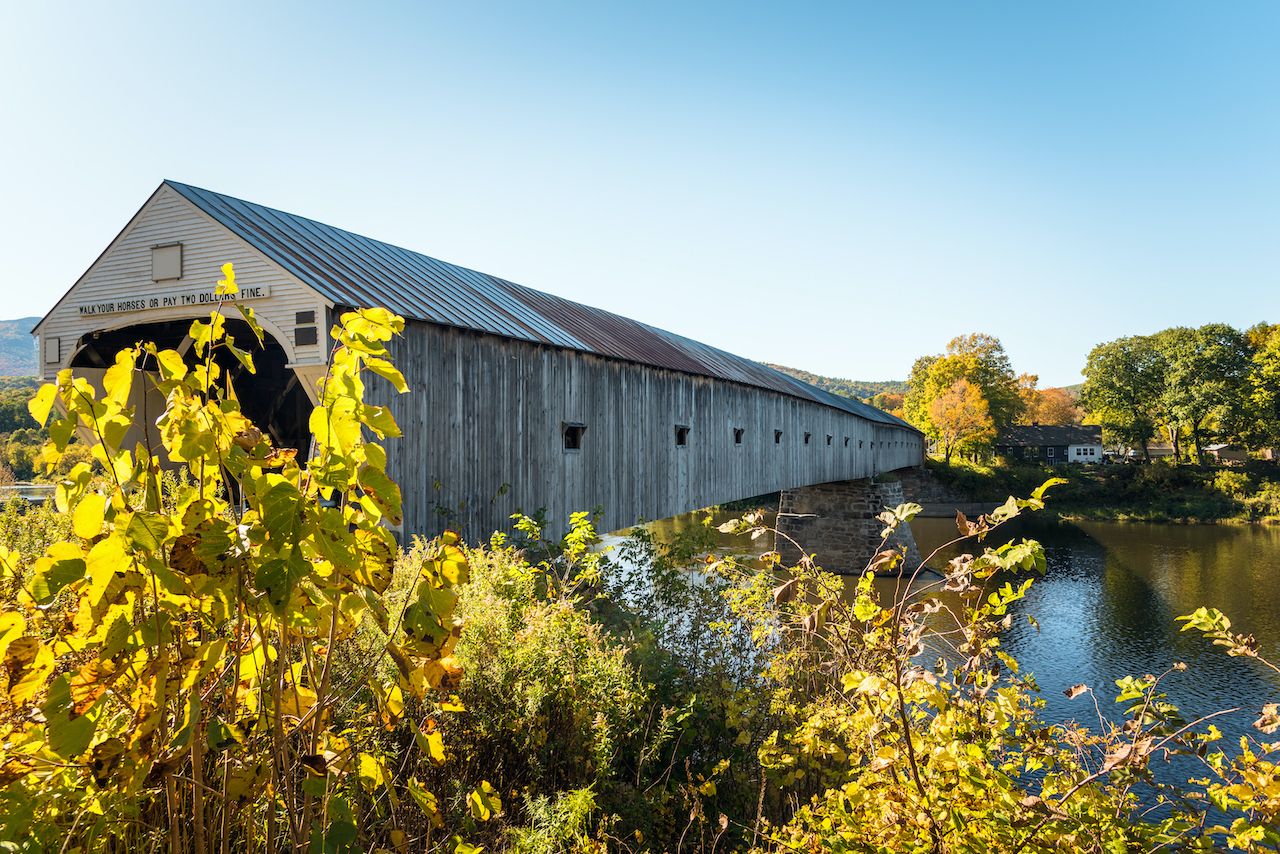 Next, make your way south to Cornish-Windsor Bridge (about 20 miles from West Woodstock). Shared between New Hampshire and Vermont, this wooden covered bridge is the longest in the United States at 450 feet long and is listed on the National Register of Historic Places. It was rebuilt entirely in 1989. 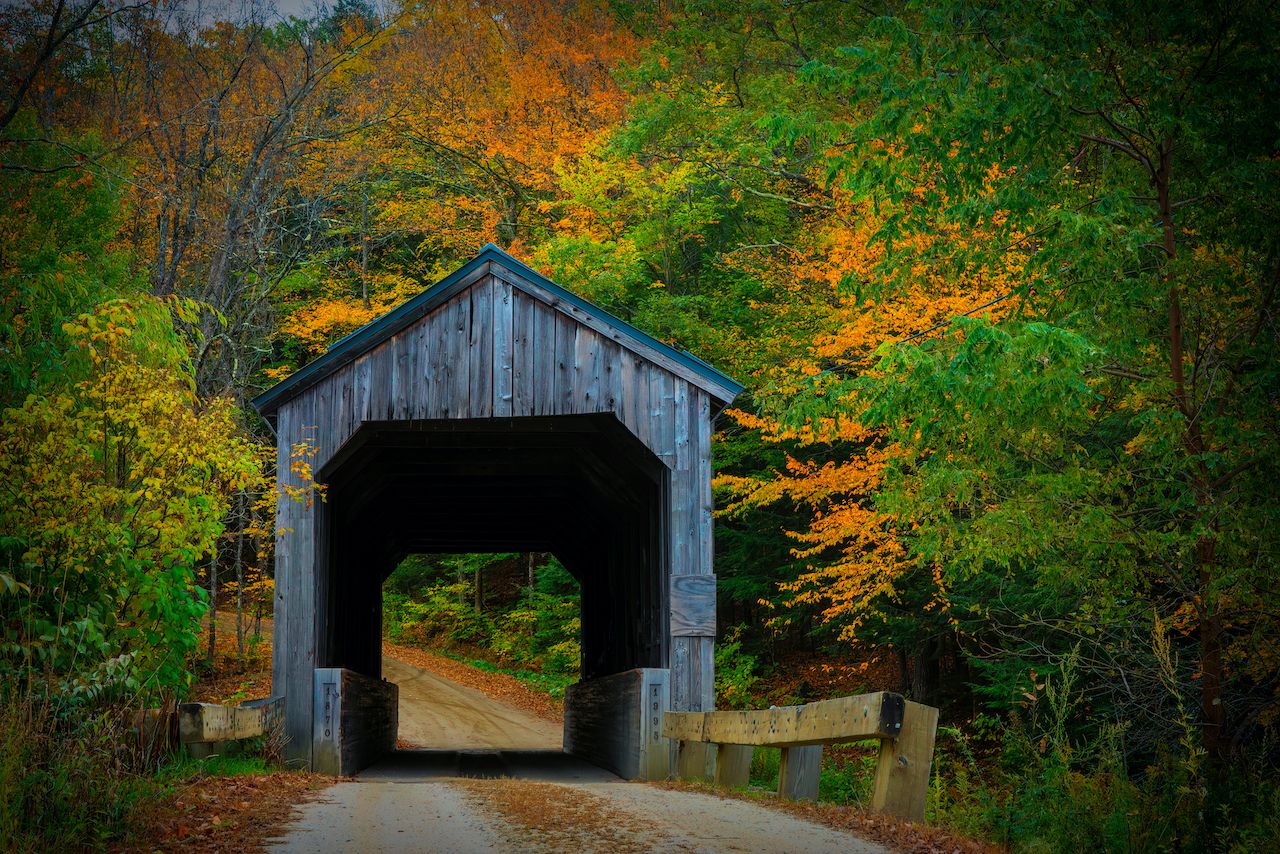 Make your way south towards Massachusetts and stop in the town of Grafton along the way (approximately 45 minutes from the Cornish-Windsor Bridge). There, seek out the 1867 Kidder Hill Bridge that crosses the Saxton River for 67 feet.

The best covered bridges in Massachusetts 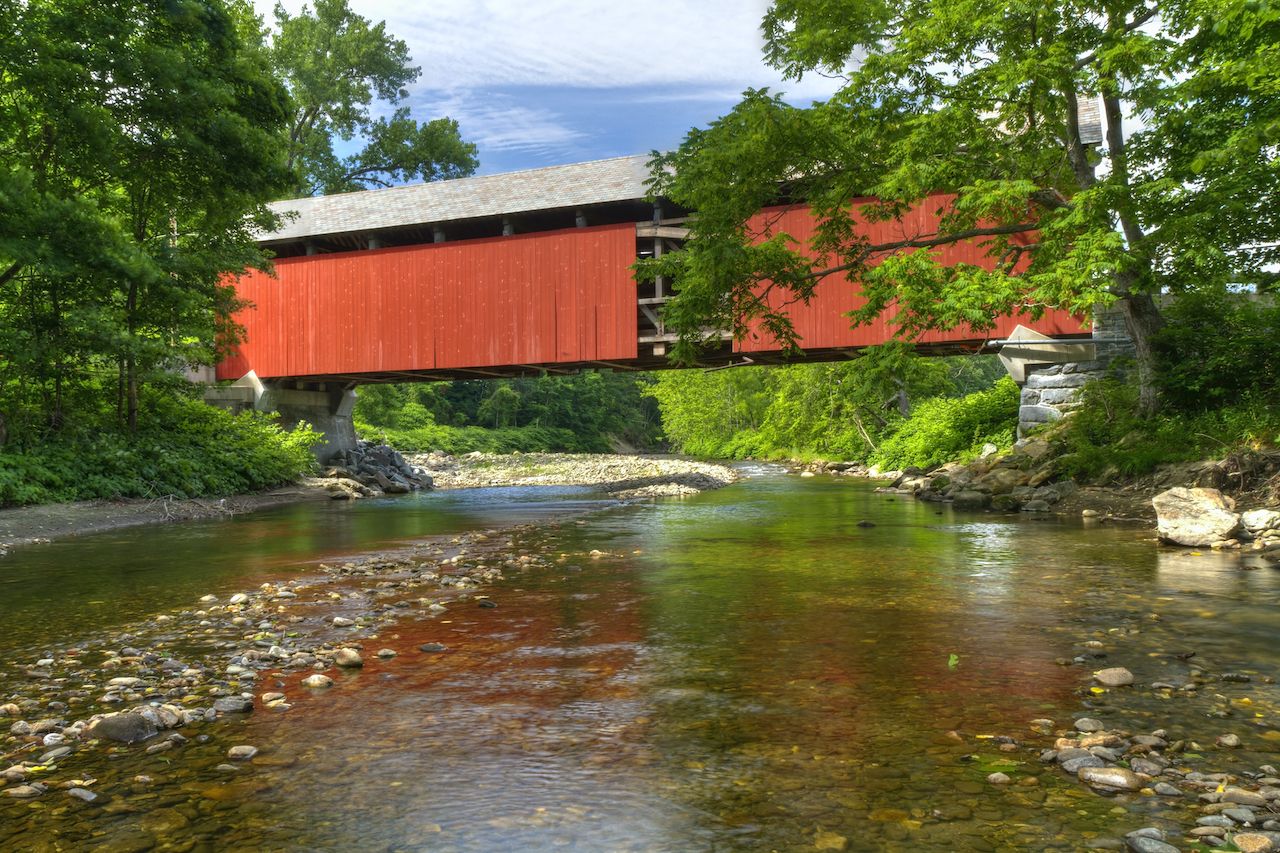 Massachusetts used to have more than 100 wooden covered bridges in the heyday of the structure. Today, there are much fewer and many of them are 20th-century replicas meant to preserve the heritage of this particular architecture.

Start with the Arthur A. Smith Bridge in Colrain (about 55 miles south of Kidder Hill Bridge), close to the border between Vermont and Massachusetts. The 100-foot-long red bridge dates back from 1870 (although it was moved from a spot further down in 1886) and crosses the North River, but you can’t drive over it as it’s pedestrian-only. 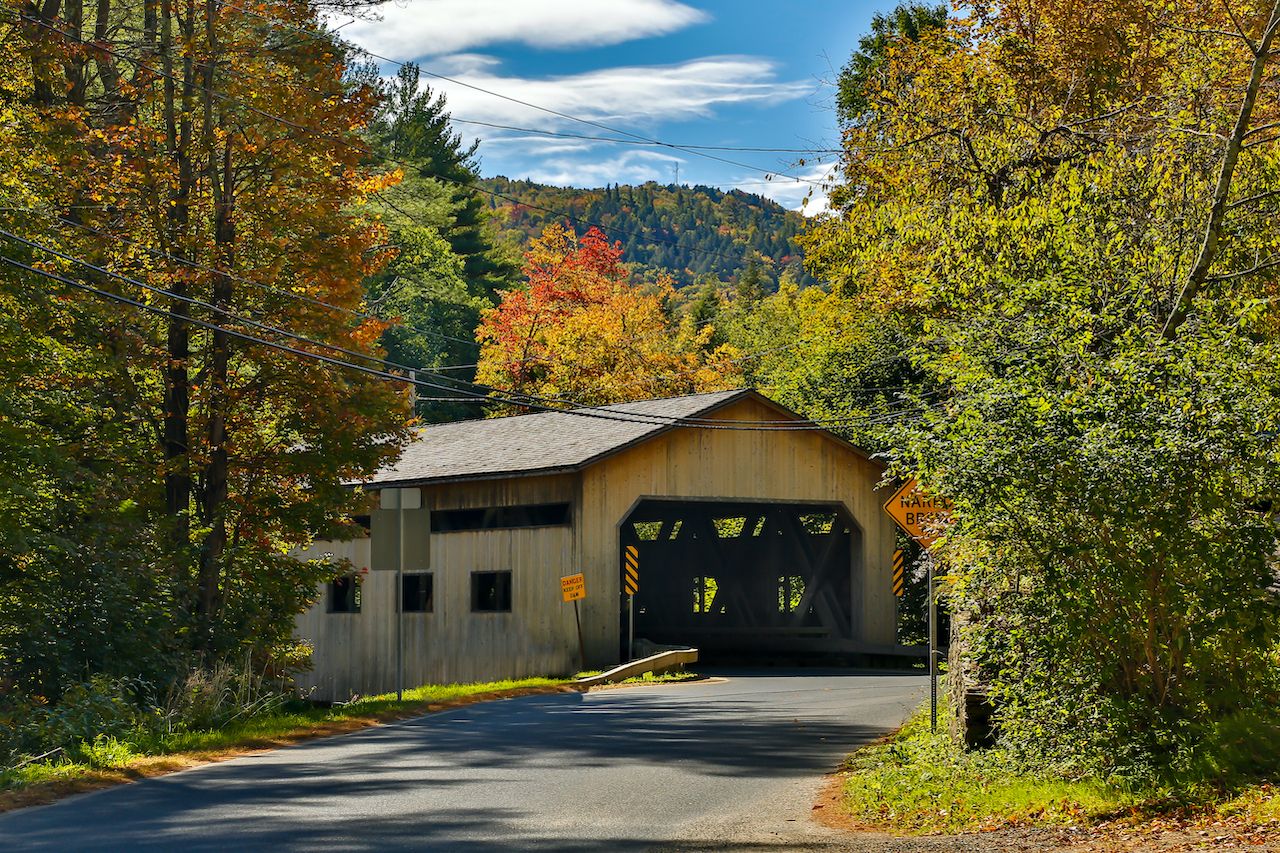 Only 20 minutes southwest is Bissell Bridge. A much more recent creation, it was completed in 1951 and crosses Mill Brook. Bissell Bridge is only for pedestrians, but there is parking nearby so you can explore it on foot easily. 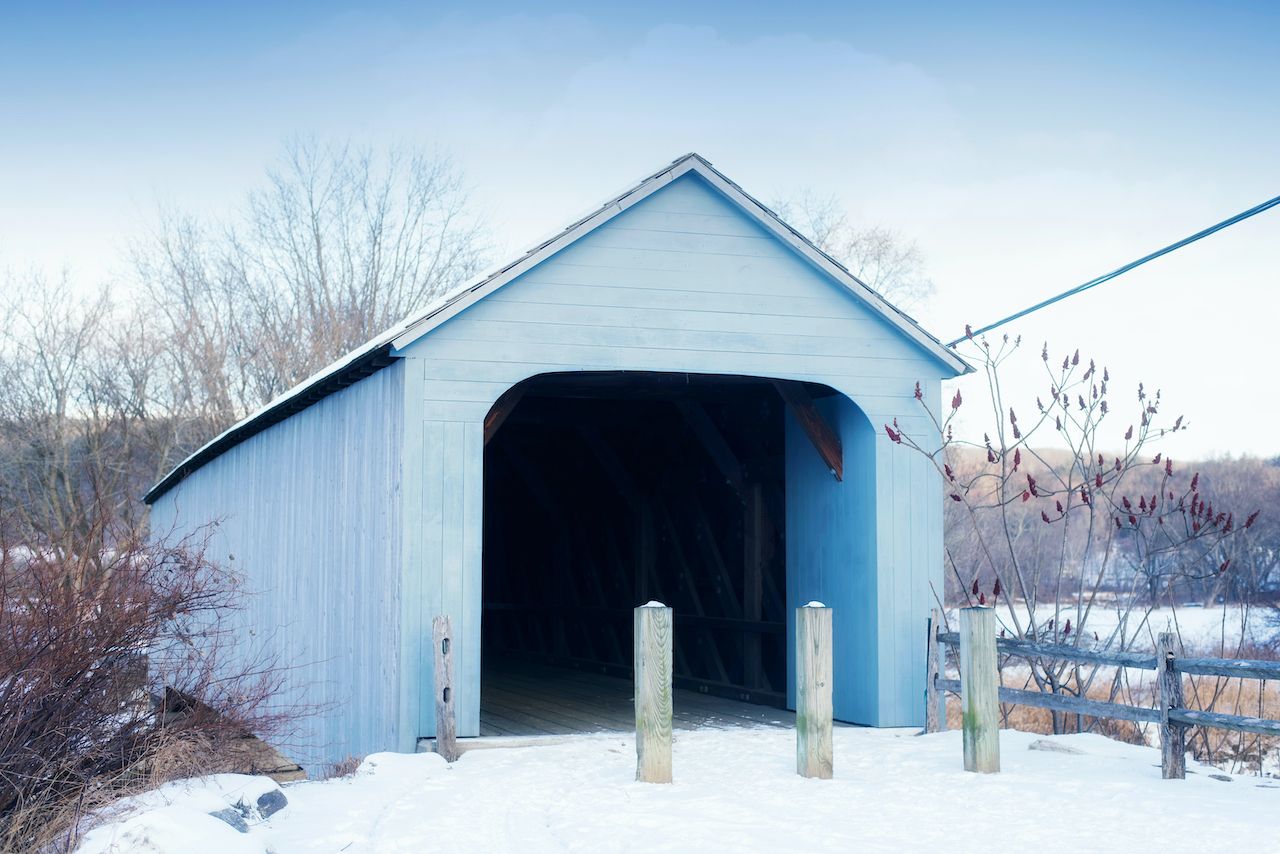 The best covered bridges in Connecticut 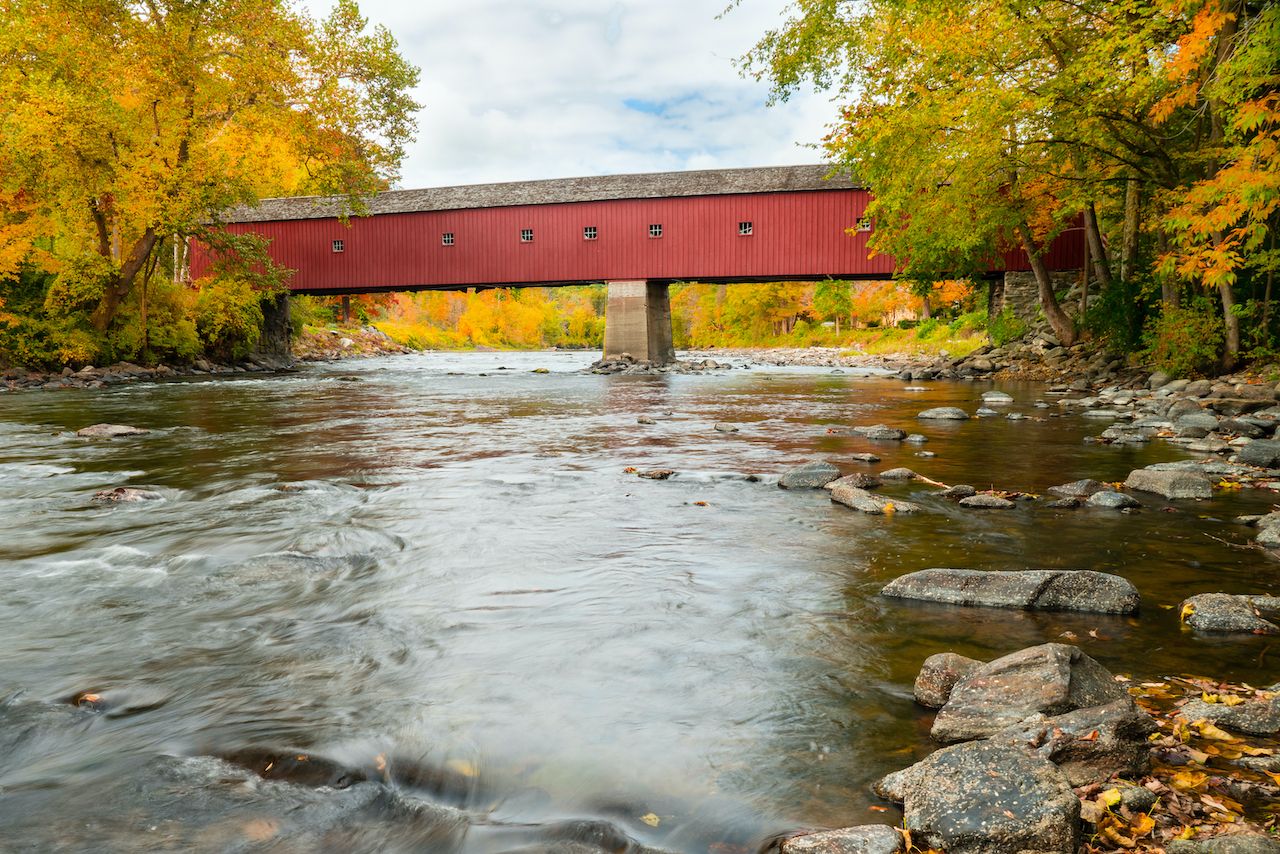 There aren’t many remaining wooden covered bridges in CT, but the ones that are there exude historical charm. Start with West Cornwall Bridge, 20 miles south of Upper Sheffield Bridge in Massachusetts. This bright red 242-foot-long covered bridge was built in 1841 above the Housatonic River and is open to vehicle traffic as it is part of Route 128. 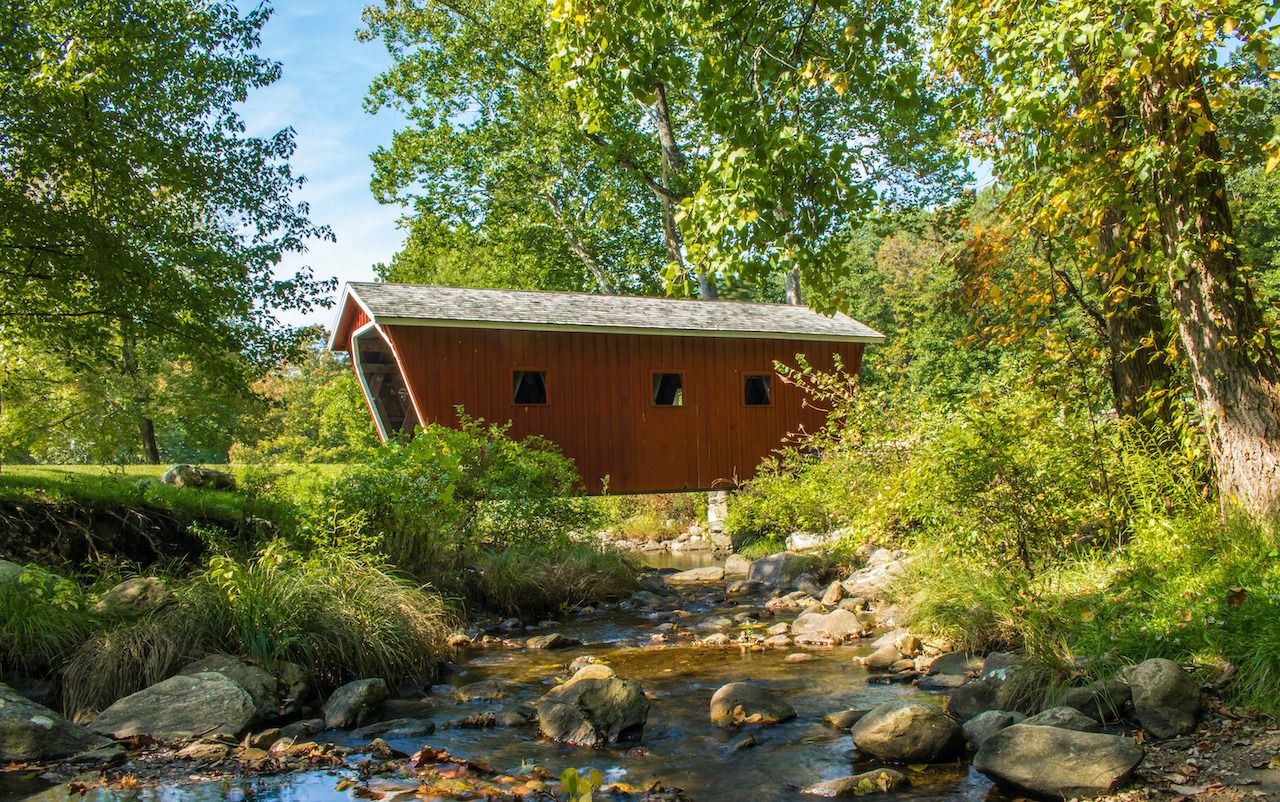 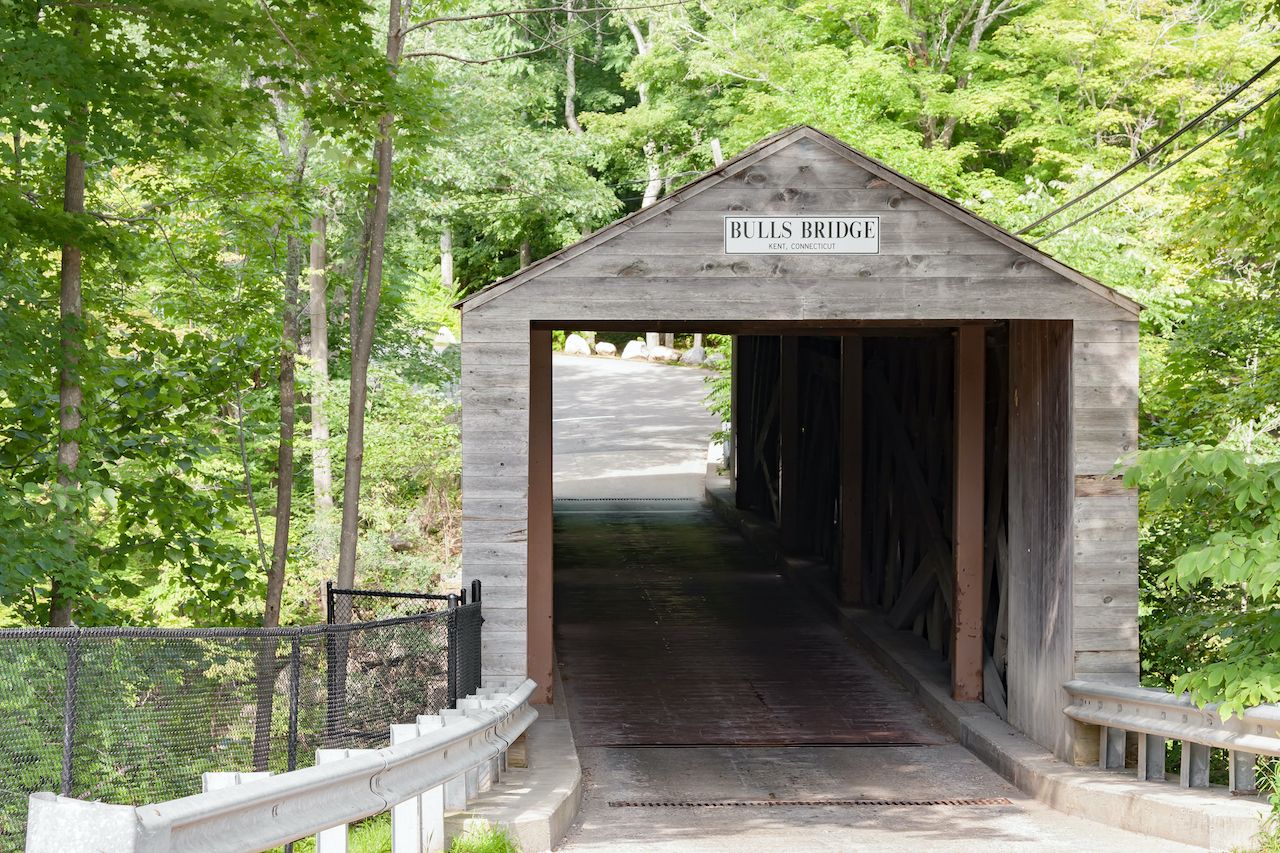 Drive 15 minutes farther south to check out Bulls Bridge in Gaylordsville. The 1842 wooden structure is not as colorful as its two predecessors, but it’s very quaint nonetheless. It is 109 feet long and crosses the Housatonic River. Bulls Bridge is open to vehicle traffic. 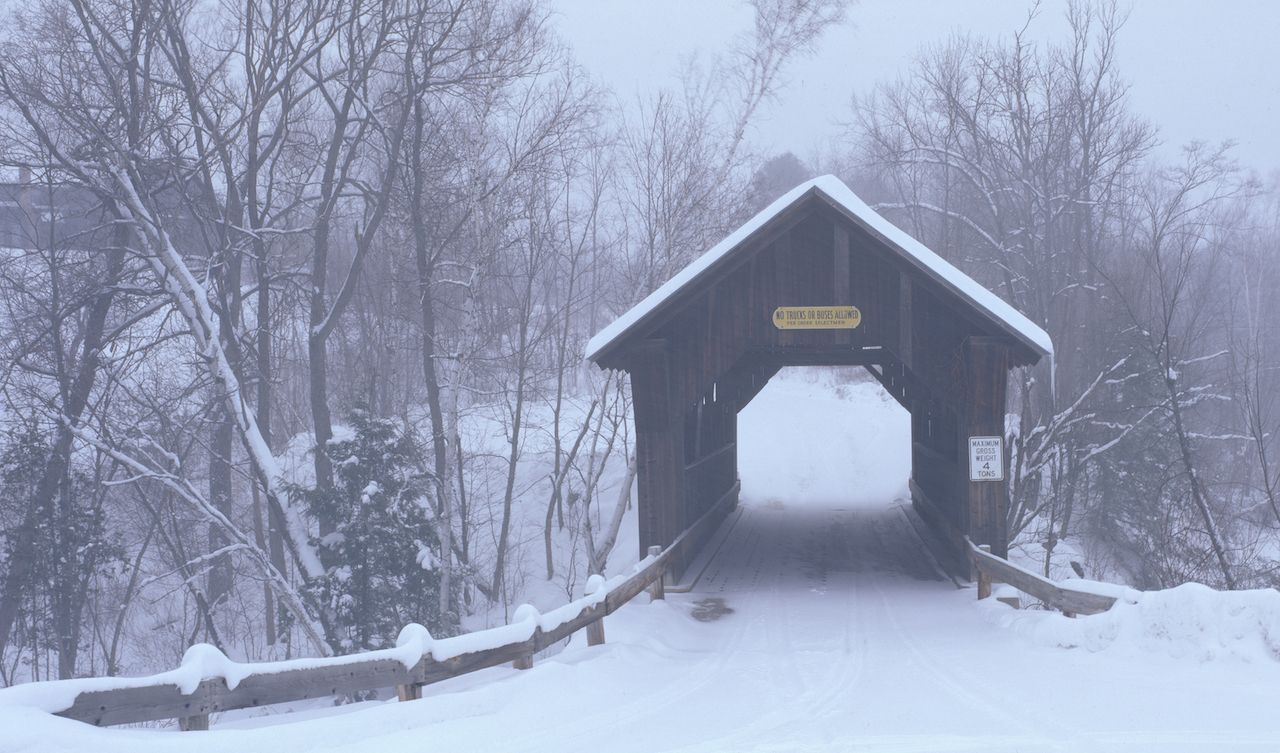 There are few surviving covered bridges in Rhode Island. The most famous of them is Swamp Meadow Covered Bridge. Drive two-and-a-half hours and 140 miles across the state of Connecticut from Bulls Bridge, and you’ll reach this replica of a 19th-century structure that looks very much the part. The wooden structure was built in 1994 by an all-volunteer crew and it is the only covered bridge on a public road in the state of Rhode Island.