For the wine-savvy, upstate New York’s Finger Lakes are synonymous with vineyards. The area’s wine tours have exploded in popularity in recent years, and its wineries rake in accolades and praise year after year. With more than 120 wineries spread through the Finger Lakes region, winemaking has become a pillar of the community, providing a livelihood for some and a must-see destination for everyone else.

These are cool climate wines — only vines hardy enough to survive New York’s harsh winters can thrive here — so winemakers must constantly be ready to adapt to the smallest shifts in climate. Now that climate change is no longer a threat but a reality, the need for action is even more urgent. Finger Lakes winemakers must take creative measures to protect their vines and ensure the longevity of wine in the region.

Hunt and other environmentally conscious winemakers must integrate sustainable solutions to both solve problems winemakers have always faced, like frost that can kill vines, and ensure that their land is viable and healthy for future generations.

“Stewardship of a place has always been part of our DNA,” she continues. “Healthy soil and healthy water are the bedrock of winemaking. If you have clear air and clean water you’re going to have a better product.”

Wineries around the world are responding to climate change in a variety of ways. Sonoma, for instance, recently became one of the most sustainable wine regions in the country thanks to waste reduction, recycling, and land management practices. New York vineyards face a different set of challenges than those out west, however.

Here are some of the ways that winemakers in New York are adapting to — and combating — climate change. 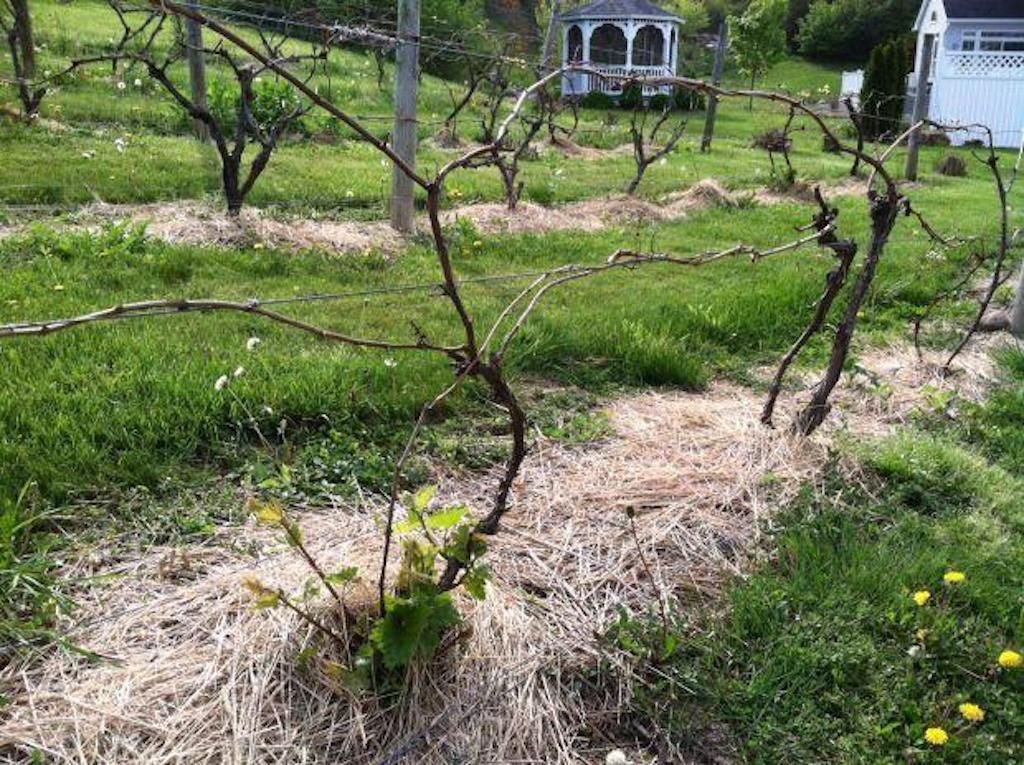 Fluctuations in temperature can be devastating to vineyards. Once winter temperatures reach 32 degrees, winter frost hits, and if the grape vines aren’t properly protected, they freeze, resulting in at least a partial loss of the season’s crop. Thanks to climate change, the Northeast is undeniably getting colder: Recent changes in the jet stream (fast moving air currents in Earth’s atmosphere) have allowed the polar vortex to more frequently escape the Arctic, causing even harsher winters in places like New York and Boston.

“From my perspective, we have seen more cold, cold episodes in the winter,” says Chris Scholomiti, who is a winemaker with his wife Janice at CJS Vineyards in Auburn, New York. “But we’ve had some warm summers. We had a great summer 2012 and 2016. It’s up and down.”

Many vineyards around the Finger Lakes are protected from the harshest winter weather in part by the proximity to Seneca Lake, which acts as a natural temperature stabilizer. Still, extra measures have to be taken to ensure that the vines don’t succumb to winter’s frost.

Most Finger Lakes vineyards grow grafted grapevines — American rootstock grafted to European Vitis vinifera grape varieties — to combat the vine-killing phylloxera pest. The part of the vine where the rootstock and vinifera meet is especially vulnerable to cold weather and needs to be protected.

Typically, vines are covered with soil at the base of the vine to protect from frost, but there are pitfalls to the method, Scholomiti says. One is that it requires driving a tractor between the rows of vines to deposit soil in the fall, and then doing so again in the spring to remove it. Scholomiti decided seven years ago to instead insulate with unused straw recycled from farms near the vineyard. Straw deteriorates as the weather gets warmer, depositing nutrients back into the soil as it does so. The straw also acts as natural weed suppressant. Hunt Country Vineyards also lays straw between rows of vines as an additional weed suppressant, as well as to trap more moisture in the soil, which keeps it healthy.

“Working with Mother Nature has always been a challenge,” says Scholomiti, who has been growing grapes since 1995. And it’s only going to get more complicated.

Scholomiti’s observations that weather has been “up and down” in recent years is an understatement. The Department of Environmental Conservation documented that the annual temperature in New York is actually getting warmer, despite more frequent cold snaps. But that isn’t always good news for vines either.

Scott Osbourne, owner of Fox Run Vineyards in Penn Yan, New York, has been growing grapes since 1994. He says that for his first 14 years, he never had to worry about frost. Then, around 2007, he began to notice uncharacteristically warmer weather in early spring, which in turn warmed up Seneca Lake. That’s when the trouble started.

Typically, when the buds feel cold wind blowing off the lake, they stay shut, delaying bud break until May 15, after the final frost has already passed. However, if Seneca Lake is blowing warmer air up to the vineyard earlier, it “kicks the buds into gear,” as Osbourne puts it, pushing bud break up to early May or even April. Vines that bud prematurely are vulnerable to a late frost that could kill them all off. As a precaution, Osbourne bought a propane-fueled 40-foot-tall wind machine, which funnels warmer air toward the ground, preventing frost from settling around the vines. So far, he’s only had to use it once.

Threats from both warmer and colder weather don’t scare Scholomiti. He’s confident that winemaking will endure in the Finger Lakes. Climate change is complicated but his purpose is simple: “Be friendly with the environment and improve our winemaking.” 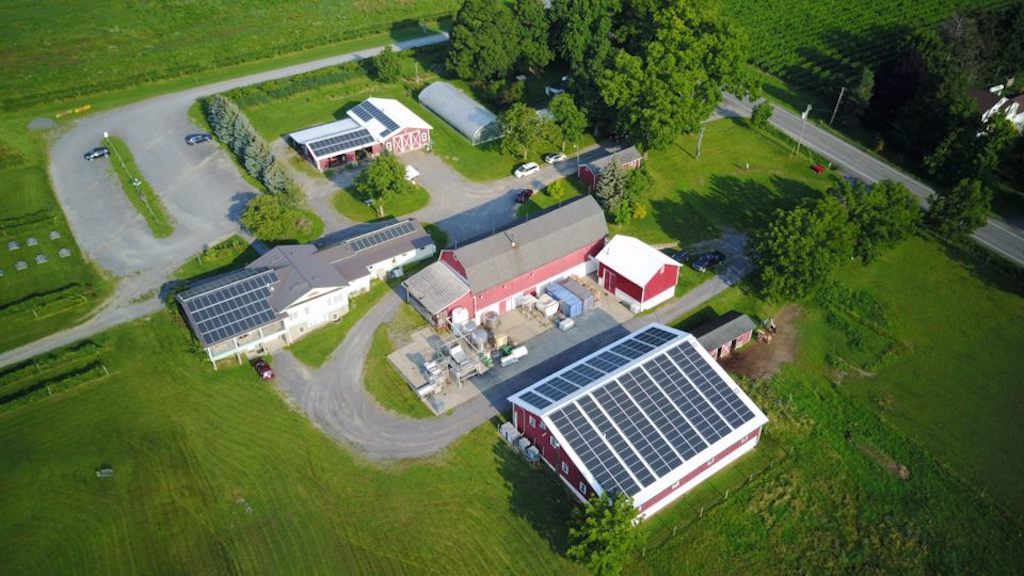 In 1962, after immigrating to the United States from Ukraine with little more than the lint in his pockets, Dr. Konstantin Frank (his PhD is in viticulture) founded his own winery. From day one, Frank wanted his business to be environmentally conscious and sustainable, and he was disturbed by the amount of chemical pesticides American winemakers used on their vines.

The winery has now been in the Frank family for four generations, and general manager Meaghan Frank is carrying on her great-grandfather’s original mission. In 2016, she joined a coalition of three other wineries — Hunt Country, O-Neh-Da, and Eagle Crest Vineyards — in a solar panel initiative to install panels on each respective property. The panels at Dr. Frank’s cover around 50 percent of the winery’s energy needs, and Frank is currently looking into a concept called solar water, which uses the panels to heat water used in the winemaking process.

Hunt Country has 348 solar panels. The winery also installed a geothermal heating and cooling system seven years ago. Combined, these two clean energy sources have nearly eliminated the need for fossil fuels (the tractors still run on gas) on the vineyard and surrounding property. In 2015, the four solar-powered wineries collectively won the Solar Champion Award from the Solar Energy Industries Association for the efforts to transition to solar power.

Fox Run Vineyards runs on close to 100 percent solar power as well. The winery is among a growing group that recognizes that solar power is the future of energy.

“As a farmer, I see that solar power has a minimal impact on the environment, and it is an easy way to reduce my carbon footprint,” says Osbourne. “With my solar installation I pretty much produce enough electricity to supply Fox Run with all its electrical needs. I’m proud of all the Finger Lakes wineries that have installed solar panels for their businesses.”

Both Hunt and Frank feel a responsibility to educate anyone curious about solar energy, and share the benefits of sustainable farming with the public and fellow winemakers.

Hunt has put solar panels on display during winemaker dinners so farmers can test the panels’ durability. All the employees at Hunt Country are trained to tell each and every person that walks through the winery’s doors about its sustainability efforts.

Meanwhile, Frank has noticed that visitors to her winery are eager to learn more about sustainability and solar power — and that they’re using their money to buy products that align with their values. When she comes to the city for events, she says that almost every guest brings up sustainability in the wine industry. 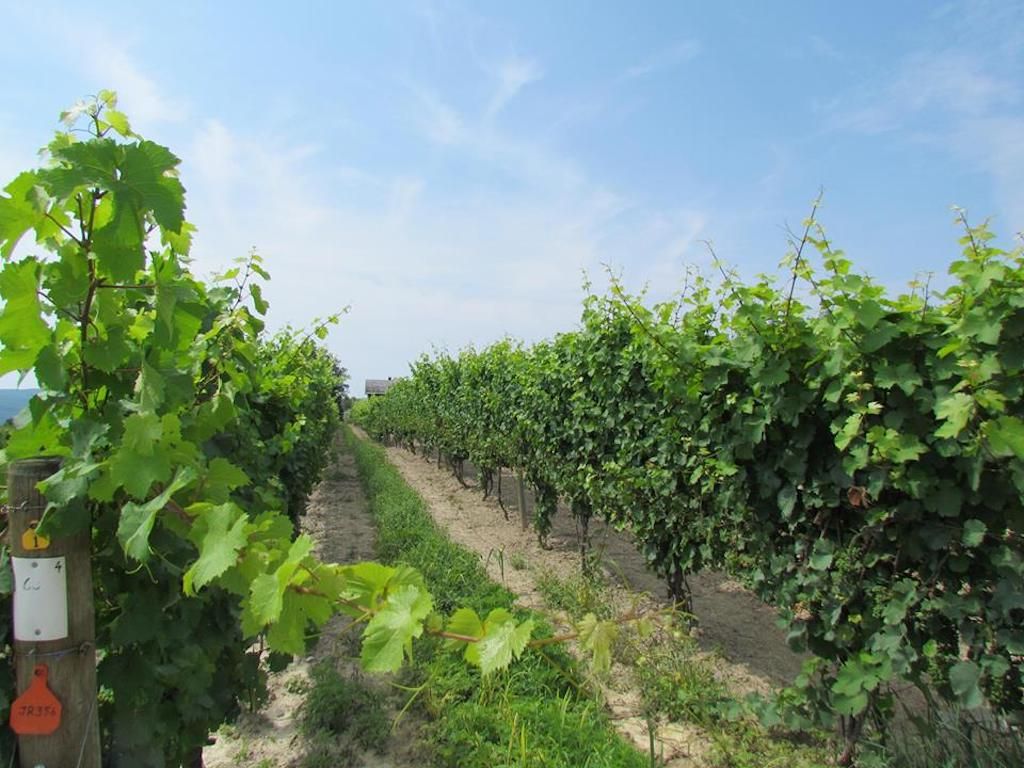 Solar power is just one aspect of Dr. Frank’s sustainability efforts. There are some smaller, though no less important, sustainability initiatives at work as well.

“Between the months of September through October when we use our press, we separate the berries from the juice so what’s left is the grape skin and seeds. Some wineries will discard them, but we mix it with manure and spread it back into the vineyards, which helps the soil nutrition,” Frank says.

Hunt Country doesn’t stop there, though. Hunt explains that the certified organic winery is also engaged in carbon farming, a set of farming practices that “result in increased storage of atmospheric carbon in the soil,” according to Green America. Hunt Country, for instance, spreads compost and mulch into the vineyard, where the soil absorbs the carbon trapped inside rather releasing it back into the atmosphere. Carbon farming allows the vineyard to capture hundreds of tons of carbon in its soil each year. That’s one way that “agriculture can be a climate solution,” says Hunt.

Hunt is cautiously optimistic about the future survival of vineyards. Her role as an advocate for environmentally friendly business practices bolsters her hope that the planet can be saved. It also helps to witness the Finger Lakes wine region transform slowly but surely into a leader in sustainable agriculture.

“There are real reasons to be concerned, but the best reaction is to take rapid action, not to simply hope for the best,” Hunt says. “The more people who take action at their own businesses and demand action from political leaders, the more optimistic I become.”

New York Has 180 State Parks, but These Are the 10 Best
How To Make the Most of Your Day at New York City’s Museum of Sex
Here’s Why 18 Miles of Fishing Line Circles Above the Streets of Manhattan