North Carolina is a state that has it all. Picturesque mountains and pristine beaches, drawing visitors during hot summers and (surprisingly) chilly winters. There’s plenty of variety to be found in North Carolina regardless of when you decide to plan your visit. Much can be seen on the road. Here’s how to plan the ultimate North Carolina road trip for outdoor adventure. 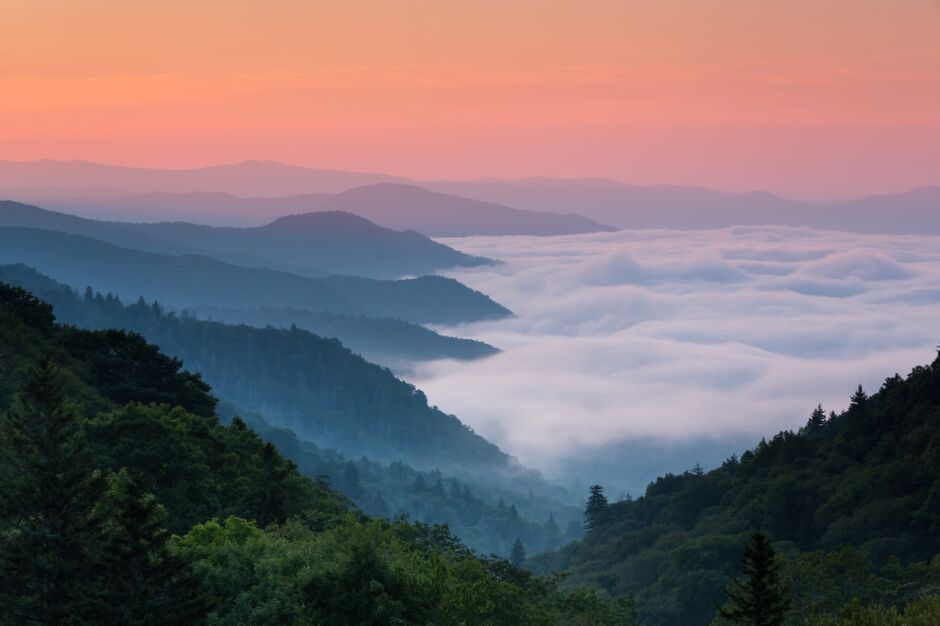 The entrance to North Carolina begins in dramatic fashion at the most visited national park in the United States. Hike to the 6,644-foot top of Clingmans Dome, the highest natural point in the Smokies, and catch a sweeping view of the azure summits in North Carolina and across into Tennessee. The lofty peak straddles the border between the two states. Explore the eight hundred miles of green, dense mountain trails inside the park, or grab a tube, available from several nearby rental shops including Smoky Mountain River Adventures, for an idyllic ride enclosed among high elevation old-growth trees within the two thousand miles of streams and lakes.

If you have time for a second day in the park, drive into the remote Cataloochee Valley. Alongside the surrounding rugged landscape, keep your eyes peeled for wild elk grazing by the remnants of rustic log cabins from the late 19th century. Afterward, take a waterfall hike. The Deep Creek trail near Bryson City offers quick trips to the misty Tom Branch, Indian Creek, and Juney Whank Falls, or head just outside of the park towards Cherokee to find the majestic Mingo Falls, one of the tallest cascades in the southern Appalachians.

Cruise part of the Blue Ridge Parkway towards Mount Mitchell 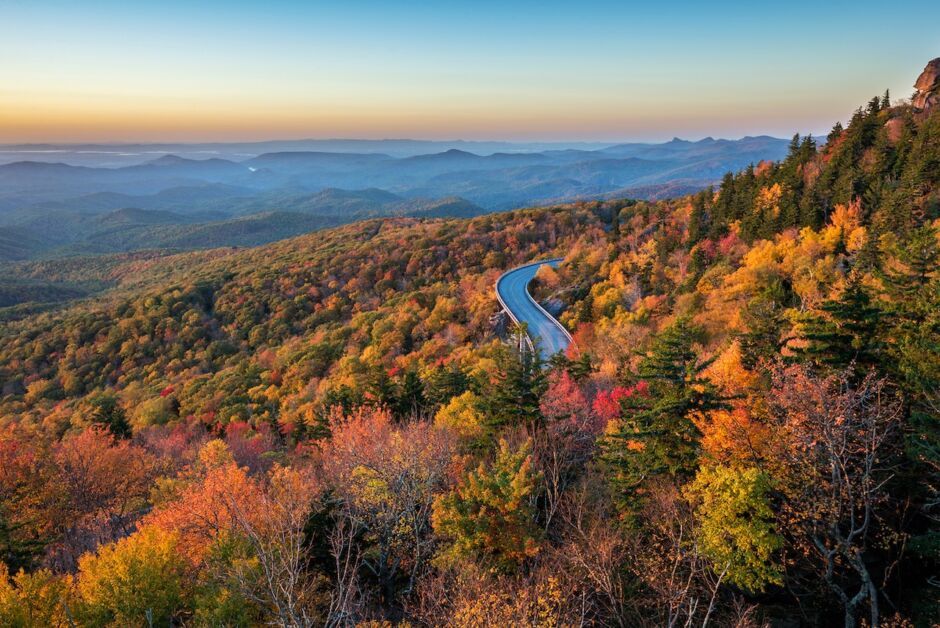 Connecting the entire mountain region of North Carolina from the Smokies to Virginia, the secluded and vibrant maple, chestnut, and oak-filled drive along the Blue Ridge Parkway departs from the park’s south entrance off of U.S. 421. This scenic drive is home to arguably the best views of fall foliage in the country. Since the elevation never rises above the treeline, sensational scenes of the reds, yellows, and orange hues of autumn can be found stretching for miles through the crisp air across the rolling summits. Make sure to grab a full tank of gas before entering, as stations are scarce along the parkway.

Turn off the Blue Ridge Parkway at NC 128, about an hour north of Asheville, to head into Mount Mitchell State Park. Drive to the lot near the top for a short walk to the summit, or climb the old-fashioned way up the lush but challenging 2.2 mile Old Mitchell Trail. Either way, you’lll be rewarded with 360-degree views of picturesque Blue Ridge Mountain scenery from the highest point east of the Mississippi River, extending for 85 miles on a clear dat. The summit is a stunning place to watch the sunset. The reds and pinks of dusk descend over the mountain horizon among the sweet scent of the numerous spruce and balsam firs, commonly grown in the region as Christmas trees, as your ear catches the songs of the ninety-one species of birds that call the state park home.

Numerous campgrounds surround the peak. Camp inside the park at the Mt. Mitchell Campground or at the nearby Carolina Hemlocks Recreation Area. If you prefer an Airbnb, we recommend this charming mountain cabin outside of Asheville. Another option is this cabin for groups up to six.

We hope you love the spaces and stays we recommend! Just so you know, Matador may collect a small commission from the links on this page if you decide to book a stay. Listed prices are accurate as of the time of publication. See our full Advertiser Disclosure here.

See our full recommendations on the best Airbnbs in Asheville, North Carolina.

Head up to Linville Gorge

Continue 20 miles northeast of Mount Mitchell to the town of Linville Falls, where neighboring trails to the eponymous roaring cascades can be found alongside several entry points to the towering Linville Gorge. Rising 1400 feet above the Linville River and twelve miles in length, a thronged thicket of birch, hickory, and hemlock flank the lush yet strenuous descent through Pisgah National Forest to the base of the gorge. Enjoy the coursing sounds of the river as you explore the high crags, a popular choice for all levels of rock climbing enthusiasts. For even more variety, try the mysterious Linville Caverns nearby. Hovering around a clammy fifty degrees in the interior, dress warmly if you choose to traverse the weathered stalactites of this bat-filled cave. 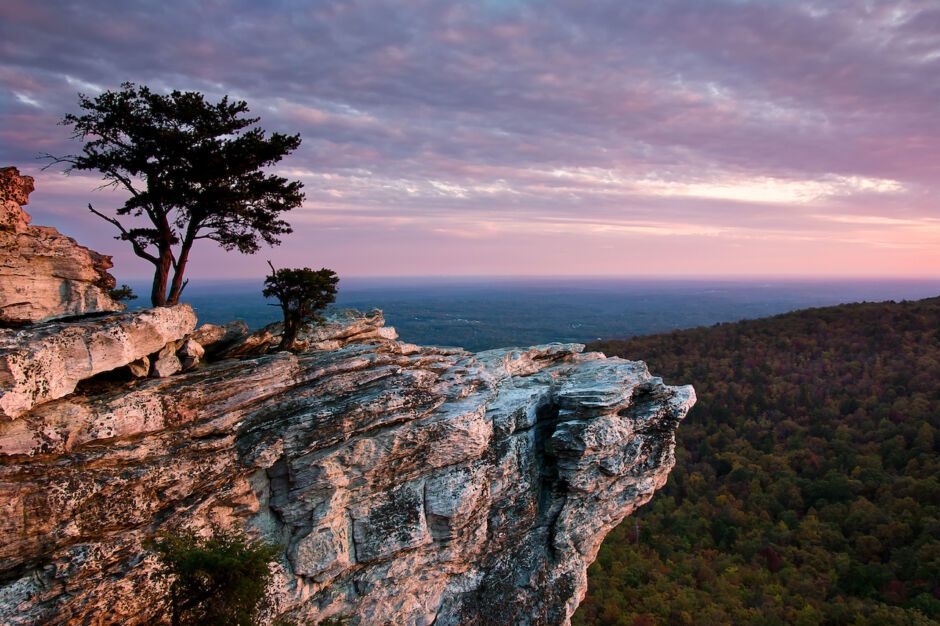 Eighty-five miles northeast of Linville Gorge, the white quartzite walls defining the rounded knob of Pilot Mountain poke out above the rolling hills and woods of central North Carolina’s Piedmont (meaning “foot of the mountain” in French) region. One of the more recognizable attractions in the state, the iconic summit has been used as a navigational landmark for centuries. A short twenty miles away resides the coarse, chalky cliff edge of Hanging Rock State Park jutting out over an expansive view of the densely arboreal Sauratown Mountains. Hike the verdant, winding bike trails and dig your toes into the sands of the park’s forested lake for a rejuvenating swim amongst the scent of the pines.

For an Airbnb overnight, this beautiful retreat at the base of Pilot Mountain makes for a cozy stay. Another option is the iconic Pilot’s Peak Cabin, where you and up to six others in your crew can enjoy a warm and comfortable rest to the sound of the woods. 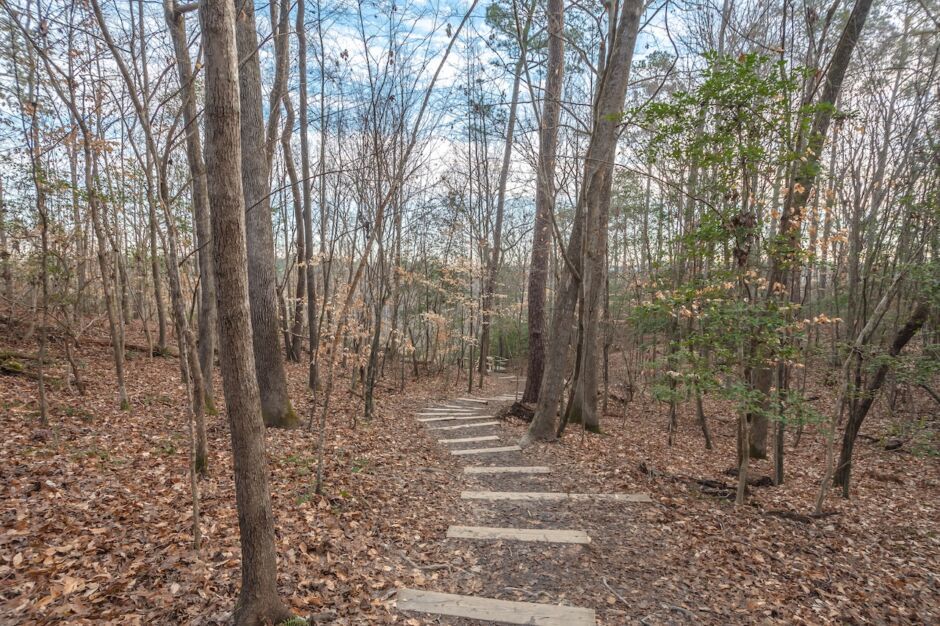 Head seventy miles southeast just outside of Durham to find Eno River State Park. Consisting of numerous popular, shady swimming holes for residents of “The Triangle”, comprising Raleigh, Durham, and Chapel Hill, this richly timbered park offers locals a cool respite from the humid, sweltering heat of North Carolina summers. Dip into the inviting waters of Bobbitt’s and Sennett’s Holes, two of the river’s natural pools, or simply listen to the flow of the Eno and immerse yourself in the thick, canopied woods lining the many trails.

About twenty-five miles southwest of Raleigh and on the edge of North Carolina’s “fall line,” where waterfalls start to appear along creeks and streams, lies Raven Rock State Park. Try renting a kayak in nearby Lillington and take a daring journey over the roaring Lanier Falls and the fast-paced Fish Traps rapids. At the south end of the park, on top of the enormous, imposing grey walls of Raven Rock at the banks of the Cape Fear, enjoy a pastoral view of the clustered, viridian oaks and hickories lining the shores, or pack a lunch for a refreshing riverside picnic in the shade.

Raleigh and its surrounding area is rich in Airbnbs. Apex is both convenient and rich in dining options without having to drive all the way into the city. This townhome puts you right in the heart of the action. If you decide to stay in Raleigh, you’ll be approaching from the southwest. As such, we recommend this tidy apartment for easy access and comfort, and a warm shower after your time exploring outside.

Roughly 80 miles around the port city of Wilmington is famously the only region in the entire world where the Venus flytrap can be found growing in the wild. Twenty-two miles east of town dwells the muggy 17,000 acres of the Green Swamp Preserve. Teeming with exotic plant life, hikers in the thick bog can find more insect-eating vegetation alongside the toothy emerald flytraps such as the lime-colored, lanky pitcher plant and the large, sticky pink leaves of the butterwort. Hop a ferry at Southport to Fort Fisher and head up the coast to Carolina Beach State Park, with miles of easy hikes among the bucolic longleaf pines and carnivorous flora, plentiful space for camping, or check out nearby Wilmington Jet Ski Rentals to explore the Cape Fear River in style.

Afterward, take US-17 north through North Carolina’s Inner Banks to find the lush, dewy Merchant’s Millpond and Dismal Swamp State Parks in the northeastern corner of the state. Bring a canoe or grab one from one of the rental stations conveniently located in both parks, and catch closeups of the lofty, bright jade bald cypress trees and swaying sage Spanish mosses poking out of the rich wetlands. Immerse yourself in the abundant greenery on one of the numerous boardwalk and mountain biking trails available, and watch for the brown otters, sleek bobcats, and the over two hundred species of colorful birds that inhabit the marshes. 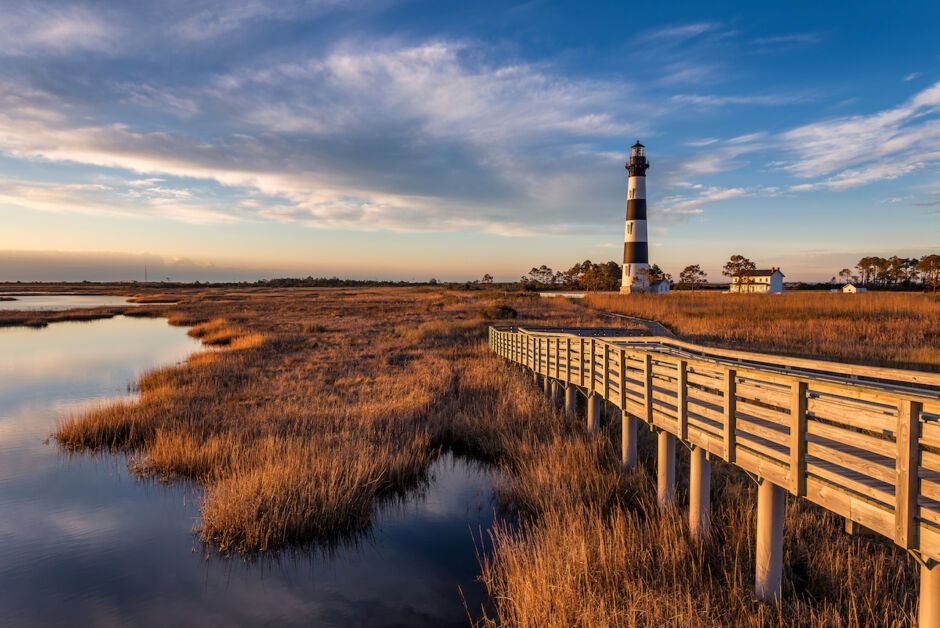 Roughly forty-five miles southeast of The Great Dismal Swamp lies the entrance to North Carolina’s famed Outer Banks, a series of picturesque barrier islands separating the mainland from the Atlantic Ocean. Hop on celebrated route NC-12 south past Kill Devil Hills to see the roaming yellow sands of Jockey’s Ridge State Park, the largest active dune system in the eastern United States. Resembling more a desert landscape than anything you’d expect to find on the east coast, it is not unusual to see a flurry of reds, blues, and blacks of kites lining the skies over the dog-friendly park. The windswept surrounding region, offering steady sea breezes and opportunities to perform and take lessons on the sports of kite flying and parasailing, is no stranger to aviation: a few short miles up NC-12 in Kitty Hawk is where the Wright Brothers flew the legendary first flight in 1903.

Your North Carolina road trip then takes you further south on NC-12 through the infamous “Graveyard Of The Atlantic.” Book a charter with Dive Hatteras and explore the sunken, haunting ruins of some of the nearly three thousand ghostly shipwrecks resting off the North Carolina coast. The southern end of Hatteras Island is home to the iconic black-and-white spirals of the tallest lighthouse in North America, Cape Hatteras Light, and plenty of options for camping near the ghost crab-filled shore in full sight of the towering beacon. Make sure to gaze at the night skies, as the faint, cloudy outline of the Milky Way is visible during low light conditions.

While NC-12 appears to end at Hatteras, the road actually continues over the water to Ocracoke Island via ferry. Free in the off-season, open to vehicles, and including a small onboard lounge offering comfortable views of the ocean, the hour-long journey through the calm seas is well worth it. Only accessible by boat, Ocracoke contains some of the most secluded beaches in the state. Grab a bite of fresh seafood from the laid-back town of Ocracoke and catch the fiery colors of the sun crossing the horizon alongside the soft roar of the waves, as this is one of the few places in the state where the sunset is observable across the Atlantic. Now far removed from the mainland, your North Carolina road trip concludes — you just have to make your way back to reality.

TravelExplore the Outer Banks of North Carolina on foot: A trail guide
Tagged
Outdoor Road Trips North Carolina, United States
What did you think of this story?
Meh
Good
Awesome

Scuba dive to submerged forests, shipwrecks, and caverns at these US lakes
The 11 hardest, most dangerous mountains to climb in the world
5 states with the most scenic and laid-back nude beaches
Biscayne National Park is the perfect day trip from Miami
These US national parks are home to epic backcountry skiing

Explore the Outer Banks of North Carolina on foot: A trail guide

From sea to sky: 6 incredible outdoor adventures in North Carolina

Islands of The Outer Banks: Which one is right for you?