The mighty, black-hued Rio Negro presents travelers with wide-open, reflection-doubled vistas. Traveling by boat up this Amazonian tributary is a stunning way to venture deeper into the Brazilian rainforest. The small town of Novo Airão sits on the southwest bank of the Rio Negro, near the world’s second largest freshwater archipelago, with hundreds of islands. Beyond that lie a national park, isolated communities, and a remote rainforest reserve. While Novo Airão doesn’t abound in natural splendor, it’s an authentic corner of the Amazon worth a journey in itself. More dramatically, it is a doorstep to the wonders of the world’s largest rainforest.

Getting there is both hard and easy. 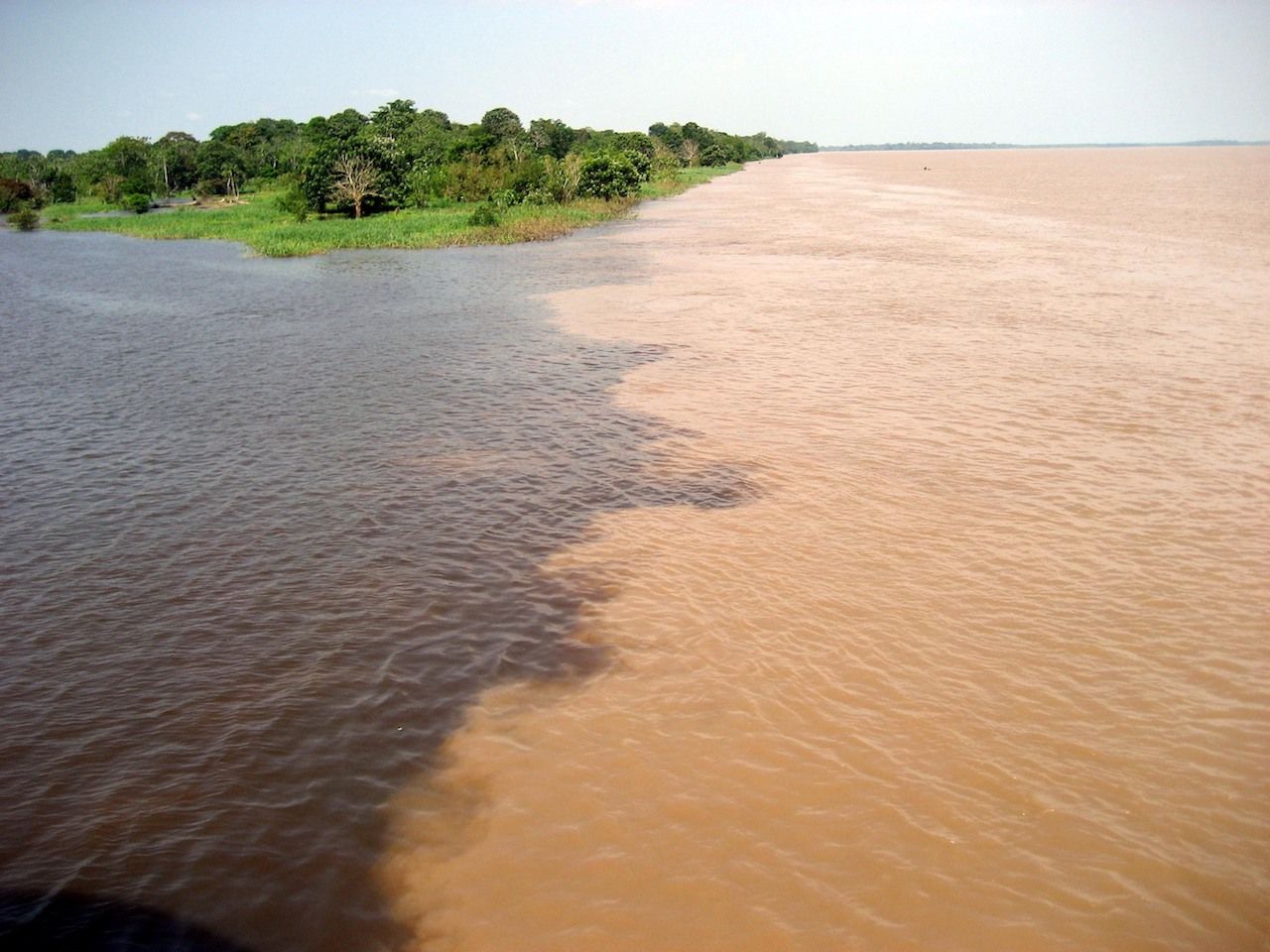 Hundreds of years ago, the Amazon rainforest was relatively easier to access than many other remote, tropical locales. Compared to bushwhacking or trekking on small trails, boating on large, slow-moving rivers could get you a long way. By modern standards, however, reaching the heart of the Amazon can be time-consuming.

The only major airport in the interior of the Brazilian Amazon lies in Manaus, a city located next to the Meeting of the Waters, where the black-tinted water of the Rio Negro meets the light brown waters of Rio Solimões. The two waters flow side by side in the newly formed Amazon river, for miles, before the waters combine.

In 2011, the Rio Negro Bridge opened, allowing direct travel from Manaus to Novo Airão. After crossing the Rio Negro, the road continues to the northwest, vaguely following, at a distance, the path of the river, moving upstream. Continuing on the road, mature forest and thick understory vegetation occasionally give way to small swimming holes. Serving chopp, or draft beer, and basic food options, these small roadside attractions cater mostly to weekend trippers from Manaus.

A full-sized bus will take you from Manaus to Novo Airão in four hours, while a collective-taxi or hired car will take around two and a half hours. After a short journey on this winding, somewhat narrow, road you arrive in Novo Airão, where the road ends.

Novo Airão is real life in the Amazon. 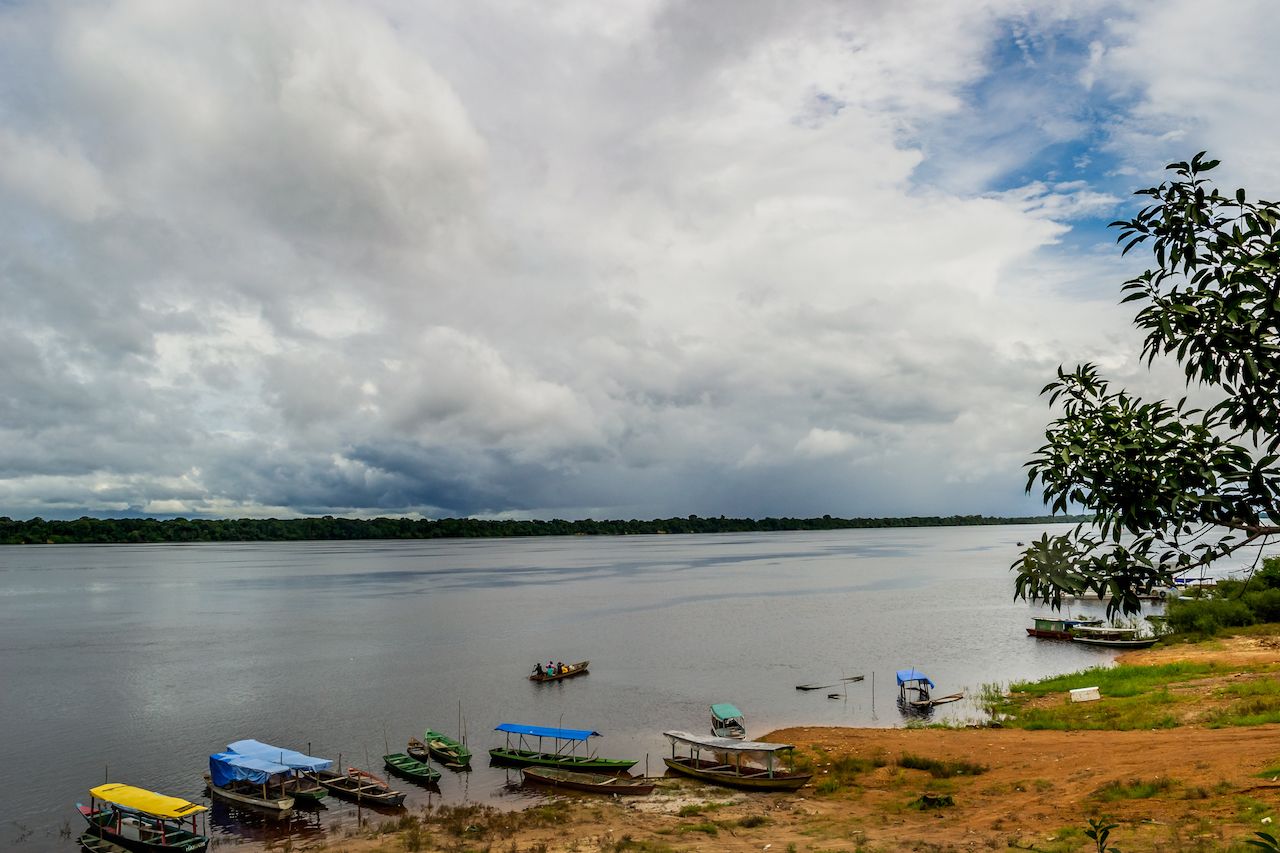 The town of Novo Airão itself doesn’t feel like a tourist destination. On the main drag, there’s a bar and burger joint with a big-screen projector set up in front of a patio full of mostly local drinkers. Ultimate Fighting Championship (UFC) fights commonly play there. Due to a couple of famous fighters from Manaus, UFC is popular in this part of Amazonas.

Young people on motorcycles sit on the streets, just outside the bar’s patio, straddling their bikes, watching matches without having to pay for drinks. In the breaks between fights, young riders race their motorcycles down the street.

For some travelers, this scene in Novo Airão might be the opposite of what they want in a trip to the Amazon rainforest, but this is real life in the Amazon. Unlike idealized images of indigenous peoples in magazines, or the curated, well-visited river communities catering to tourists, Novo Airão is a small town, not unlike small towns elsewhere in the world.

There are other attractions in Novo Airão, such as Ama Boto, a spot where the proprietors feed pink dolphins to give tourists an up-close look, and sometimes even a swim with these unique creatures. Talented boat builders live in town and show off their handiwork to visitors.

There are accommodations for diverse budgets. 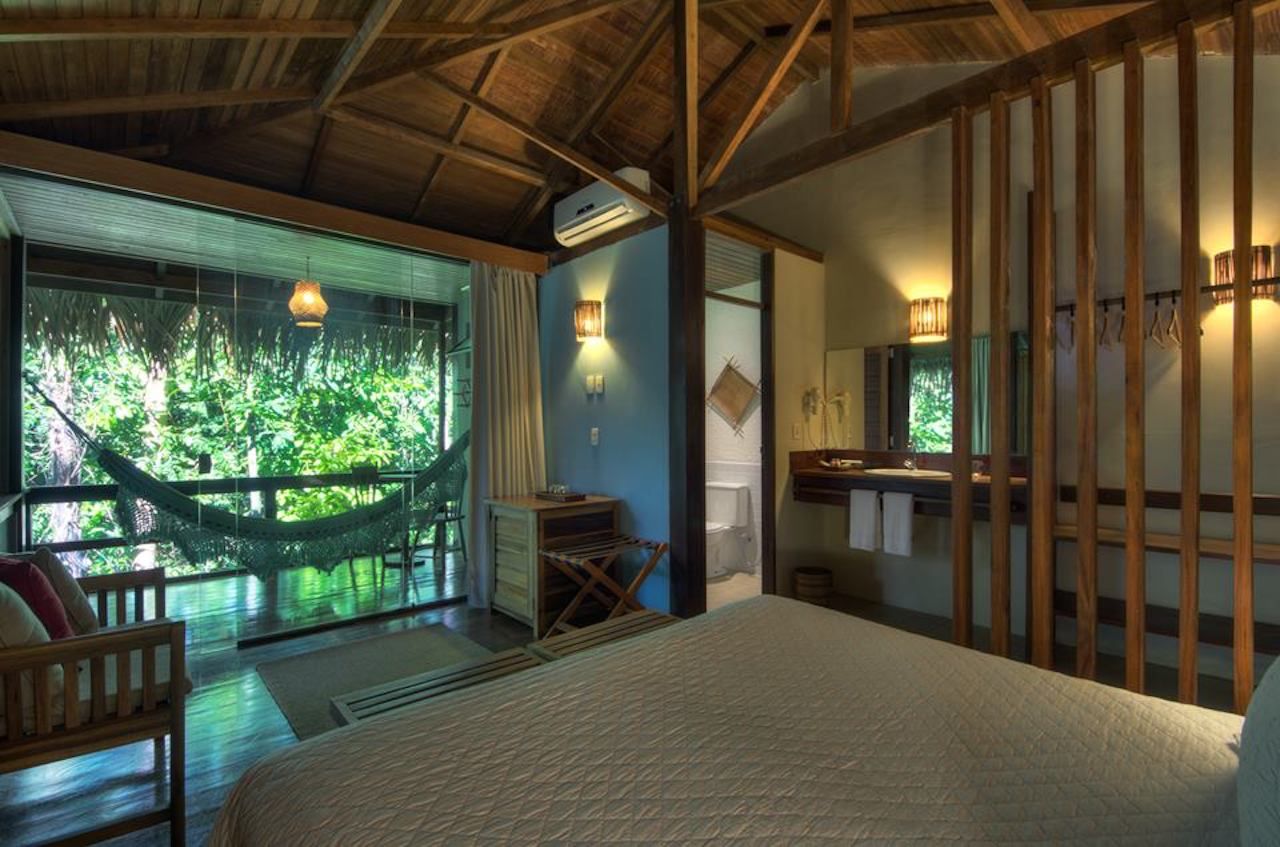 For travelers who can afford it, Anavilhanas Lodge is the most comfortable, well-appointed place to stay. If you’re on a budget, Pousada Bela Vista provides adequate lodgings very popular with Brazilian tourists from Manaus or more distant cities. Each place offers a restaurant, with daily-caught fish cooked in traditional styles.

Anavilhanas Lodge offers tours, and so does Pousada Bela Vista, through its partner Em Cantos da Amazonia. Visit Amazonia specializes in travel to Xixuaú-Xiparinã and offers shorter tours as well. It’s best to directly contact the tour companies via email or phone. While details are available online, it’s much easier to get a sense of whether a given tour company might be a good fit through a give and take of detailed information. If the tour companies in Novo Airão don’t seem right for you, there are many tours departing from Manaus — ranging from a half day to several weeks. With enough time, travelers can cruise on a traditional boat upriver for a couple of days, or it’s possible to take a speedboat for faster travel.

Anavilhanas is a freshwater maze dotted with islands. 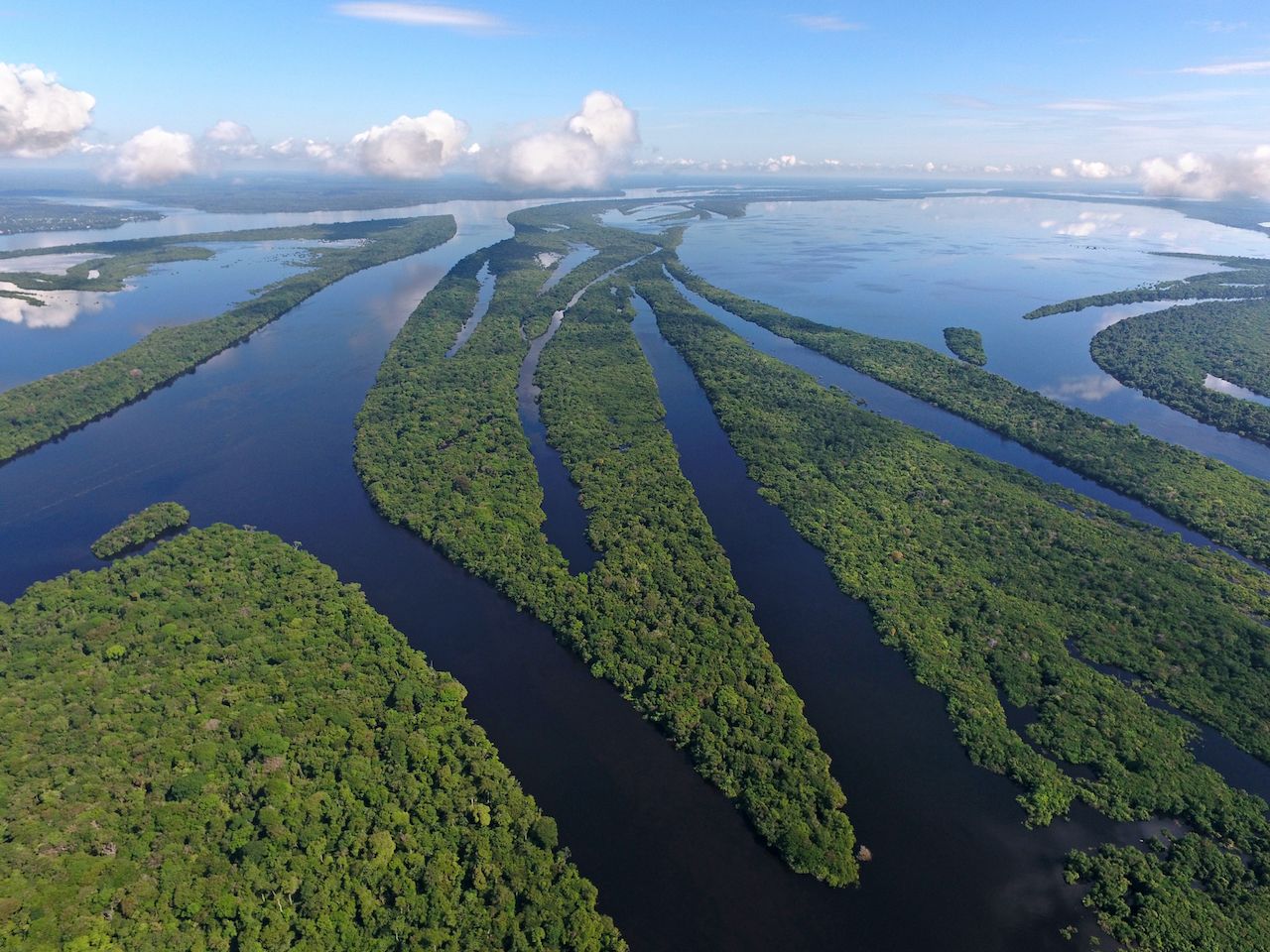 Easily accessible from Novo Airão, Anavilhanas National Park comprises an archipelago of over 400 islands, some large, some small. By boat, you can enter channels, nooks, and small passageways between the trees of the islands, emerging again and again into new corners of this maze-like patchwork of forested land and placid waters. On a calm day, the highly reflective, ebony-toned water of the Rio Negro will produce mirror images of the trees, so that even the water will look like forest. 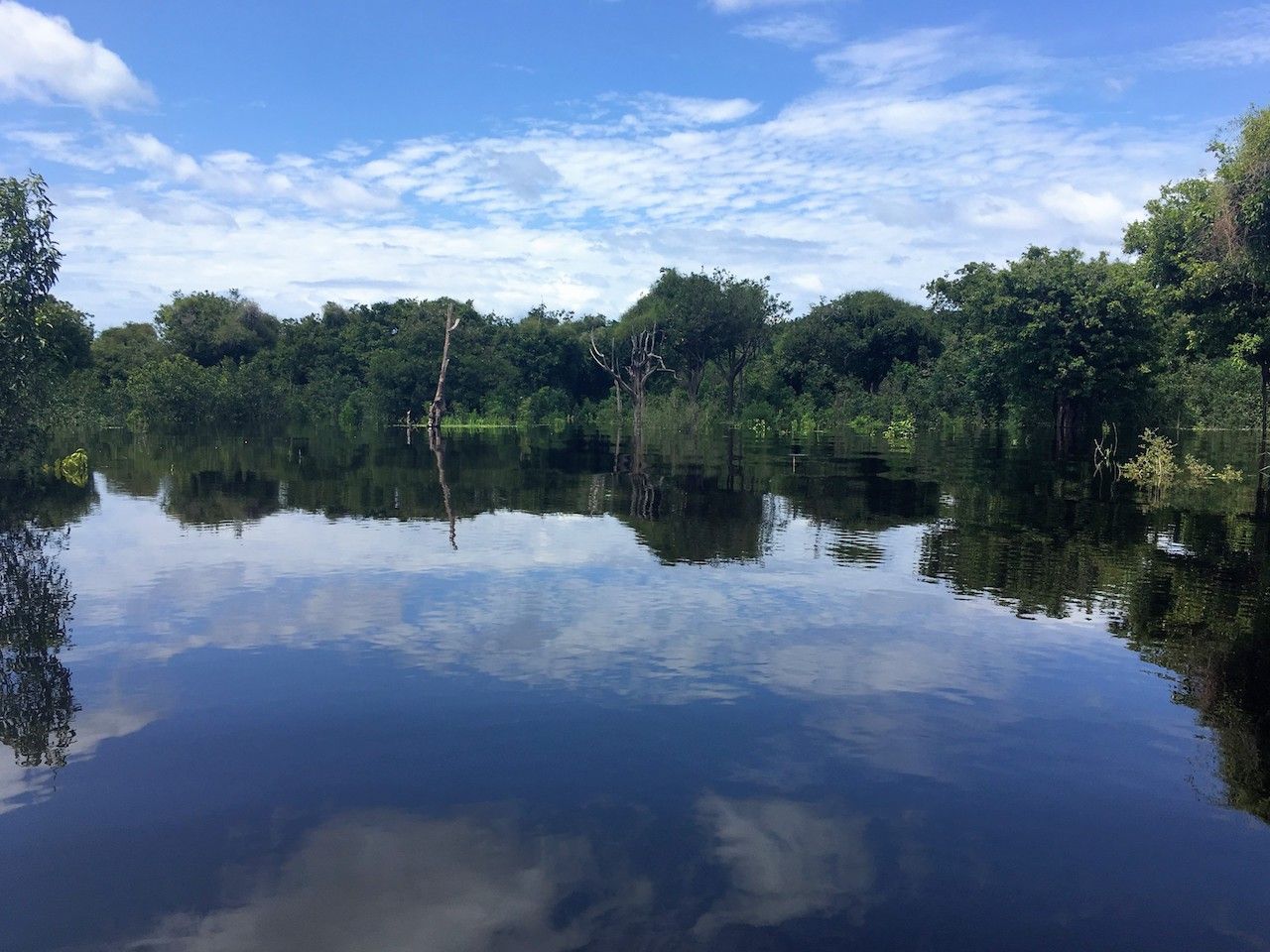 When the water is low, sand beaches extend from some islands, where locals from Novo Airão come to relax. When flooded, the Rio Negro overtakes the islands, totally flooding many, so that only the trees are above water. In this high water, small boats can navigate through trees straight over the top of the islands, making even more small nooks of the archipelago accessible. 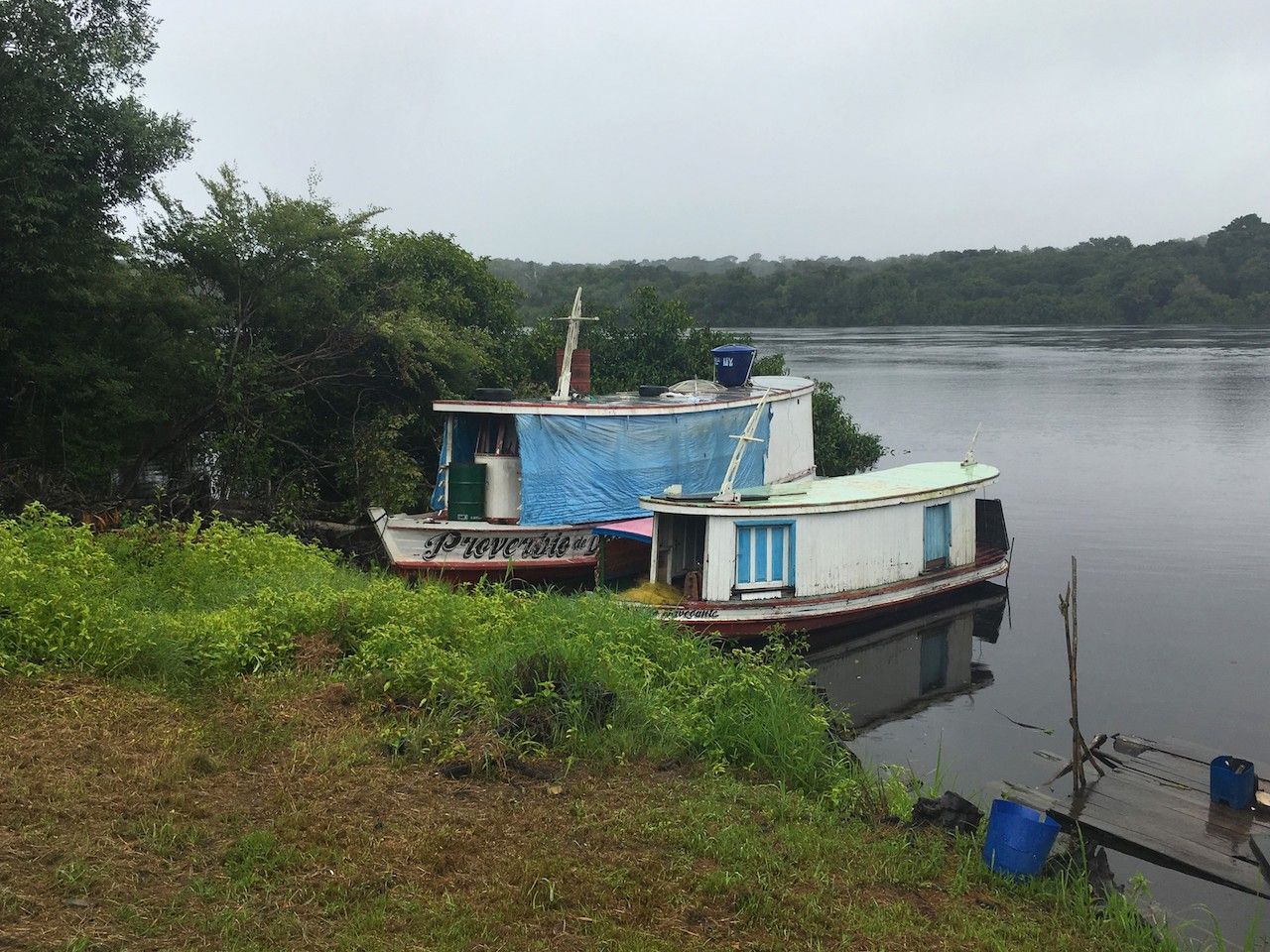 By motorboat, you can go from Novo Airão to Jaú National Park in just under three hours. It’s well worth the ride, which can be rainy and choppy, bouncing travelers in their seats. During off-peak seasons in Jaú, travelers may not encounter any other tourists for days on end. There is a rich variety of wildlife, with sightings more likely than in more populated areas.

The river communities here are less geared toward catering to tourists. Communities of 10 or 15 families just outside the park boundary serve as magnets for people living even more remotely. Many families and even individuals live on their own, with no neighbors for five miles in either direction. 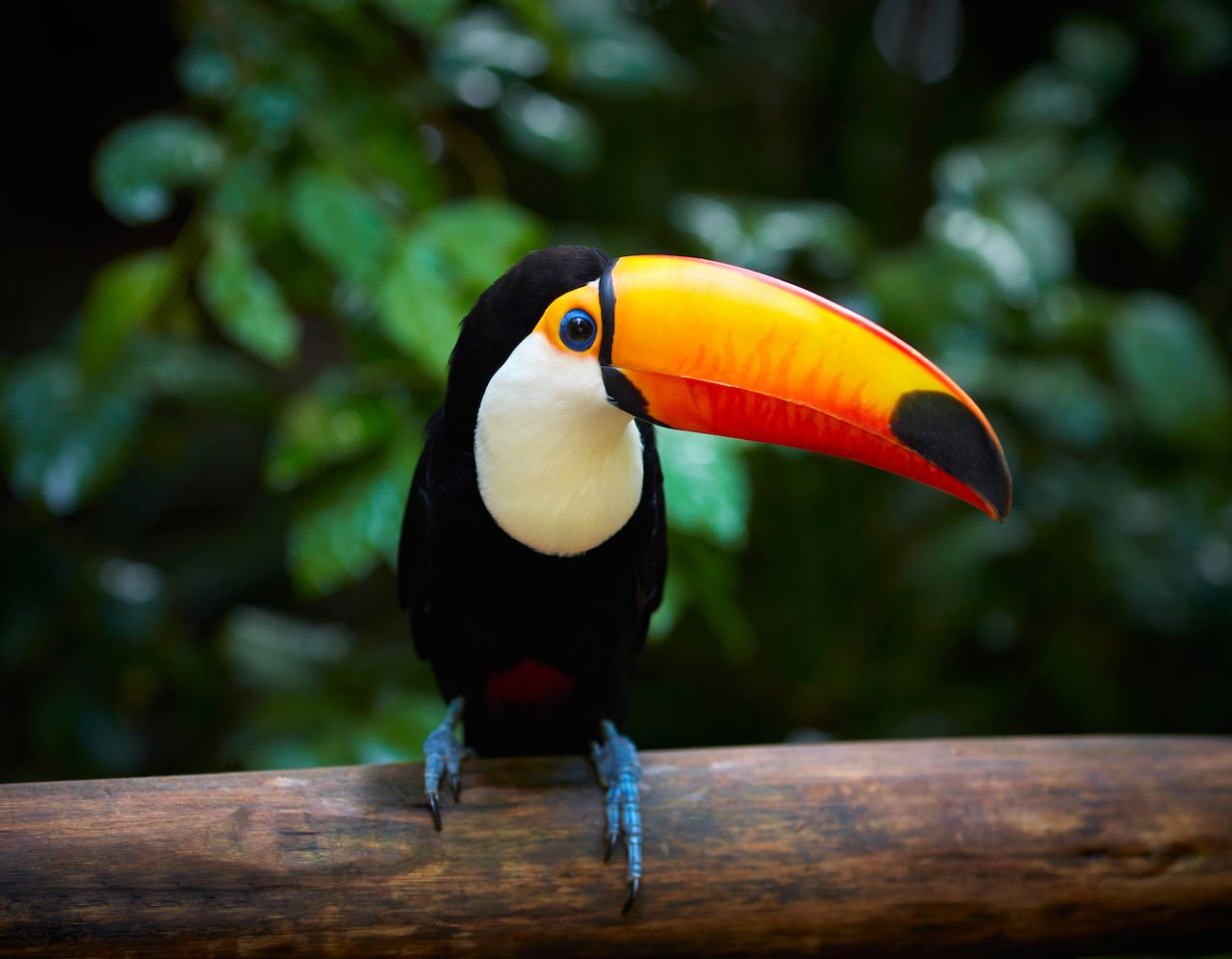 Even further up the Rio Negro lies Xixuaú-Xiparinã, a remote, unspoiled corner of the Amazon rainforest. Large swaths of primary forest still remain in this preserve. For good reason, Xixuaú has been featured in documentaries highlighting its splendid flora and fauna.

It’s common to spot tree frogs, river otters, marmosets, armadillos, sloths, tapirs, turtles, several species of monkeys, and countless types of stunning butterflies. Iconic parrots and toucans are also common, along with hundreds of species of all types of birds. While sightings are extremely rare, if one wants to see wild anaconda or jaguar, this is a good place to try.

ActivismBrazil’s New President Is a Threat To the Environment. Here’s What You Can Do About It.
Tagged
Parks + Wilderness Trip Planning Brazil
What did you think of this story?
Meh
Good
Awesome