Turns out a pandemic is a crash course in pantry cooking. Between limiting our trips to the grocery store and finding staple ingredients stripped from the shelves when we get there, self-isolation has become one long, inescapable episode of Chopped for many of us. But even Ted Allen can only do so much with canned chickpeas and that condiment that’s started fermenting in the back of the fridge. Fortunately, that’s not the case if you’re down to just flour.

Bread, one of the world’s most ubiquitous and universal foods, only requires a few ingredients that the average household may already have on hand. With ample time and patience, all you need is flour, water, and a pinch of salt. Start adding in extras like store-bought yeast, butter or oil, eggs, and the flavorings of your choosing, and the number of bread recipes you can pull off in your kitchen almost makes the idea of being stuck at home bearable.

If ever there was a time to master the art of the yeasted dough, it’s now. Here’s how to get started, from choosing the perfect first recipe to fermenting your own mother dough. 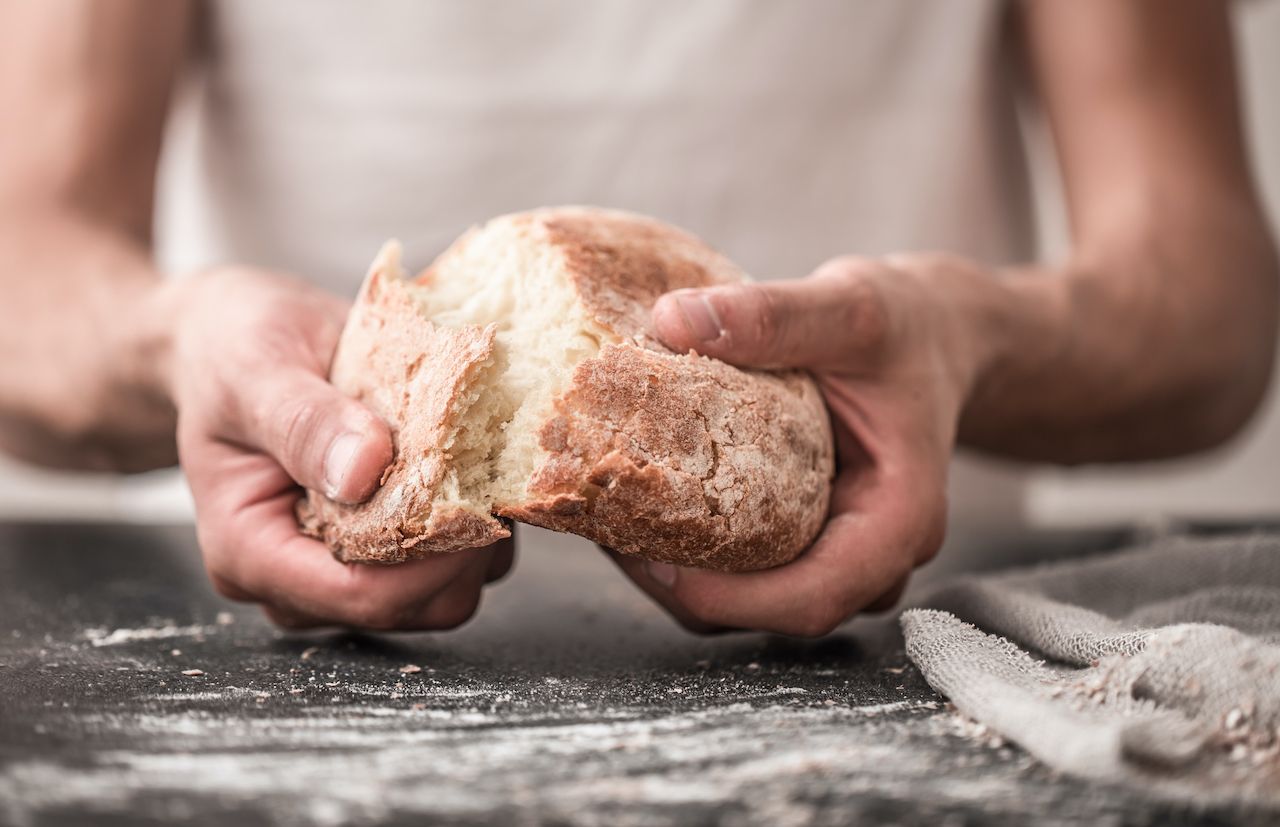 As with any new hobby, one of the first bread-baking challenges you’ll face is figuring out where to begin. In matters of the kitchen, that generally means choosing a trial recipe. For me, it was the cult-classic country loaf from San Francisco’s Tartine Bakery on the advice of my uncle, the most seasoned amateur bread baker I know. I’ve since added James Beard Award winner Jim Lahey’s no-knead bread to my list of recommendations, as well. It’s less ambitious for novice bakers as it neither requires a homemade starter nor any kneading, although the tradeoff is that the dough takes at least 12 hours to ferment. Alternatively, if you own a Dutch oven, brand notwithstanding, Le Creuset’s classic loaf recipe is tried, true, and exceptionally approachable.

It’s astounding how quickly you can blow through bread recipes when you’re stuck indoors. If the hobby takes off after you’ve experimented with random recipes, take the plunge and build out your library. Both Jim Lahey and Chad Roberston of Tartine Bakery have written cookbooks that expand on their techniques and philosophies. Peter Reinhart’s The Bread Baker’s Apprentice, now in its 15th edition, has been converting home bakers into bread masters since 2001. Ken Forkish’s Flour, Water, Salt, Yeast joined the ranks of go-to guides in 2012.

Unlike individual recipes, investing in cookbooks provides an opportunity to dive deep into the world of dough. Accordingly, it’s a chance to learn from your favorite bread bakers. Always secretly wanted to audition for The Great British Bake Off? Work your way through the pages of Paul Hollywood’s Bread. Dreaming of eating your way through a French boulangerie? Transform your kitchen into a cuisine with the Poilâne cookbook from Paris’ first family of baking. The possibilities are as endless as your virtual shopping cart. 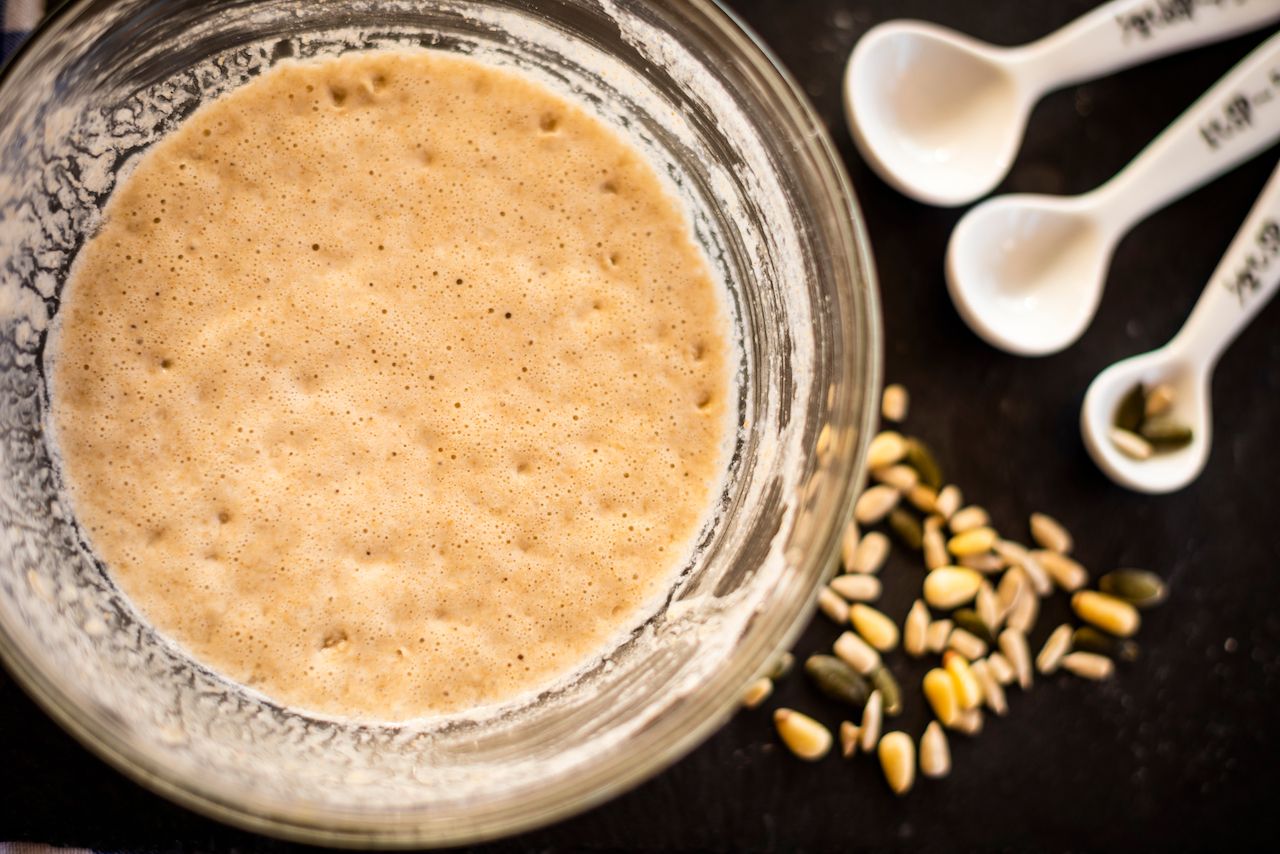 Behind every great sourdough loaf is a starter, a live culture made from flour and water that relies on wild yeast for leavening and its characteristic tang. The idea is simple: Combine flour, water, and time to kickstart fermentation, then feed your starter fresh flour and water to keep it alive. Regularly fed, it can survive in the refrigerator indefinitely. Just ask San Francisco’s Boudin Bakery, whose legendary mother dough is made with a 170-year-old yeast culture.

Rather than rely on a print recipe, which can be unclear if you have no point of reference for the finished product, consider a YouTube tutorial for visual cues as to whether or not your pre-ferment is successful. Matador staffer Morgane Croissant swears by Patrick Ryan’s masterclass, which takes you through the sourdough-making process from starter to loaf. I’ve found success following Joshua Weissman’s lead, with a little help from Pro Home Cooks.

At the end of the day, the most important ingredient in making a starter is time, of which many of us have an abundance of these days. Nonetheless, those uninterested in waiting a week before popping their first loaf into the oven can also order sourdough starter online.

Take advantage of tutorials and forums.

Among the most comprehensive resources for artisan bread bakers anywhere on the internet is Breadtopia, a digital forum that has everything from video tutorials and blog posts to recipes and an online store. It’s a one-stop shop for advice on the basics, including starters and no-knead recipes, as well as a place to share tips and tricks with other bakers. The Fresh Loaf is a similar concept with an active forum, books, lessons, recipes, and more that’s been met with equally rave reviews. If it’s finding a community of like-minded hobbyists you’re after, consider looking into the subreddits Breadit, ArtisanBread, and Sourdough.

Of all the loaf-saving courses you can find online, none appear to be as widely recommended as Peter Reinhart’s artisan bread-baking class hosted by Bluprint, formerly Craftsy. A James Beard Award winner and instructor at Johnson & Wales University, Reinhart breaks the bread-baking process down into 12 steps and shares his techniques over more than five hours of lessons, all of which are available for free until April 9. Bluprint also hosts other online bread-baking courses, including several from always-reliable King Arthur Flour. Online learning platform Udemy has a variety of courses on offer, as well.

Food + DrinkThis African Country Is a Bread Lover’s Paradise
Tagged
Food + Drink
What did you think of this story?
Meh
Good
Awesome