While New Yorkers are still cursing the cold winter temperatures and Punxsutawney Phil the groundhog for being wrong about an early spring, visitors can look ahead to the eventual warmer weather. As it comes off so urban and metropolitan, New York City probably isn’t the first place that comes to mind when you think of cities with vast amounts of green space. To the contrary, NYC does both, and it does both well. There are over 28,000 acres of park space all across the five boroughs, so you can get your nature fix in whatever area you find yourself in.

The first park people think of when they think of New York is Central Park, an iconic NYC sight right up there with the likes of the Empire State Building and the State of Liberty. While relaxing in the sun on the Great Lawn, taking a paddle boat out on the lake, and walking around the reservoir are all fine activities in their own right, there are so many other parks that are well worth a visit — and all are near other cool spots that you can combine into an action-packed trip. Here’s our list of five parks you can visit that aren’t Central Park. 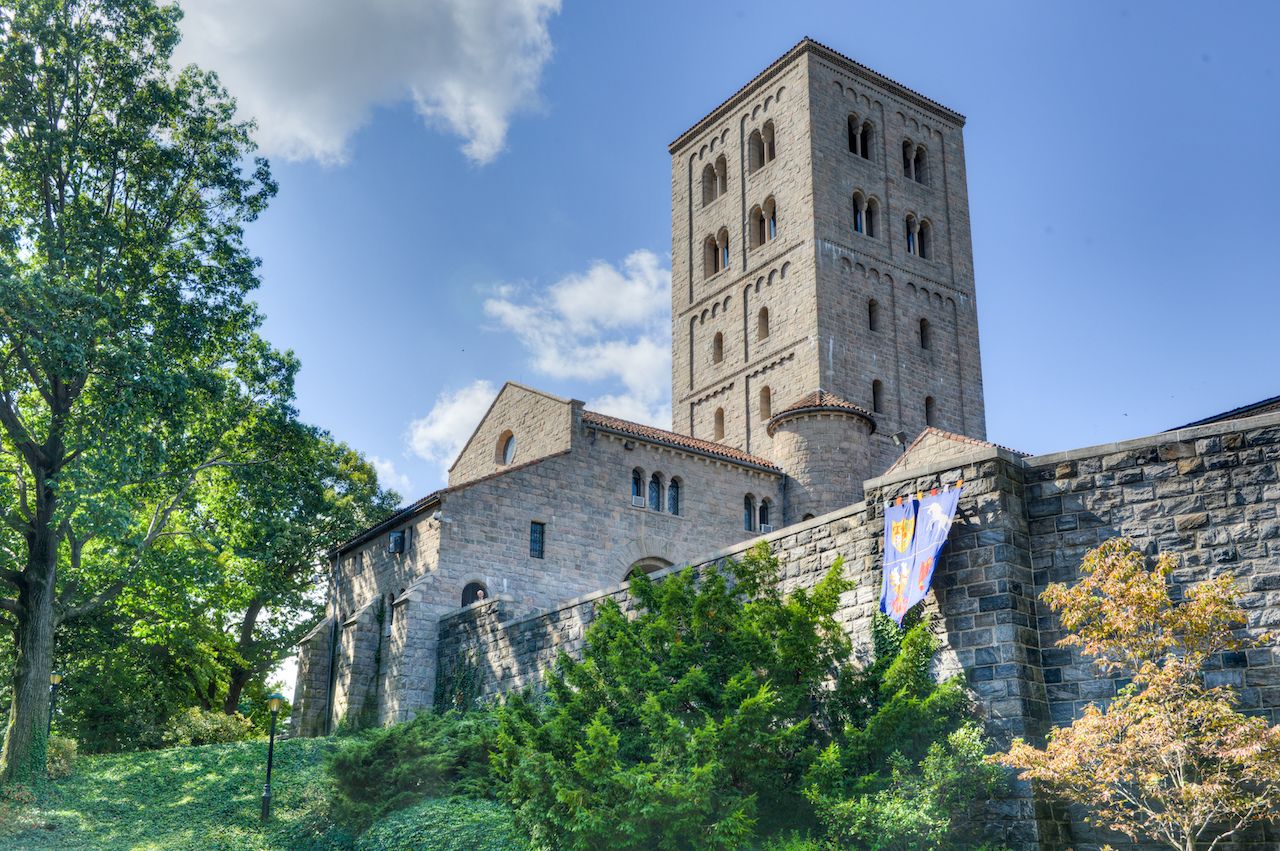 Fort Tryon Park originally began as John D. Rockefeller Jr.’s vision to create a public park with incredible views. And succeed he did because from any point in the park you’ll find breathtaking scenery, whether it be of New Jersey, the Hudson River, George Washington Bridge, Inwood, or the Bronx. Opened in 1935, the park’s 67 acres are both natural and landscaped. It boasts the largest garden in the city with over 550 plant varieties, the largest dog run in Manhattan, eight miles of pathways for walking or running, workout stations, volleyball and basketball courts, ping pong tables, and playgrounds. The park hosts an hour of morning fitness every Tuesday, Thursday, and Saturday that consists of walking, stretching, and strengthening exercises, all for free. In addition to taking care of your body, it’s a great chance to make some new friends. Once it gets warmer out, the Fort Tryon Trust hosts several other events, such as guided nature walks, historical tours, bird watching, and festivals.

If you’re up for it, you can also visit the Met Cloisters, a branch of the Metropolitan Museum of Art. From the outside, it looks like a medieval castle surrounded by Fort Tryon’s abundant greenery, and the inside provides just as much grandeur. Admission is $25 for adults, $17 for those ages 65 and over, $12 for students, and free for children under 12, and it gives you access to over 5,000 medieval European works. 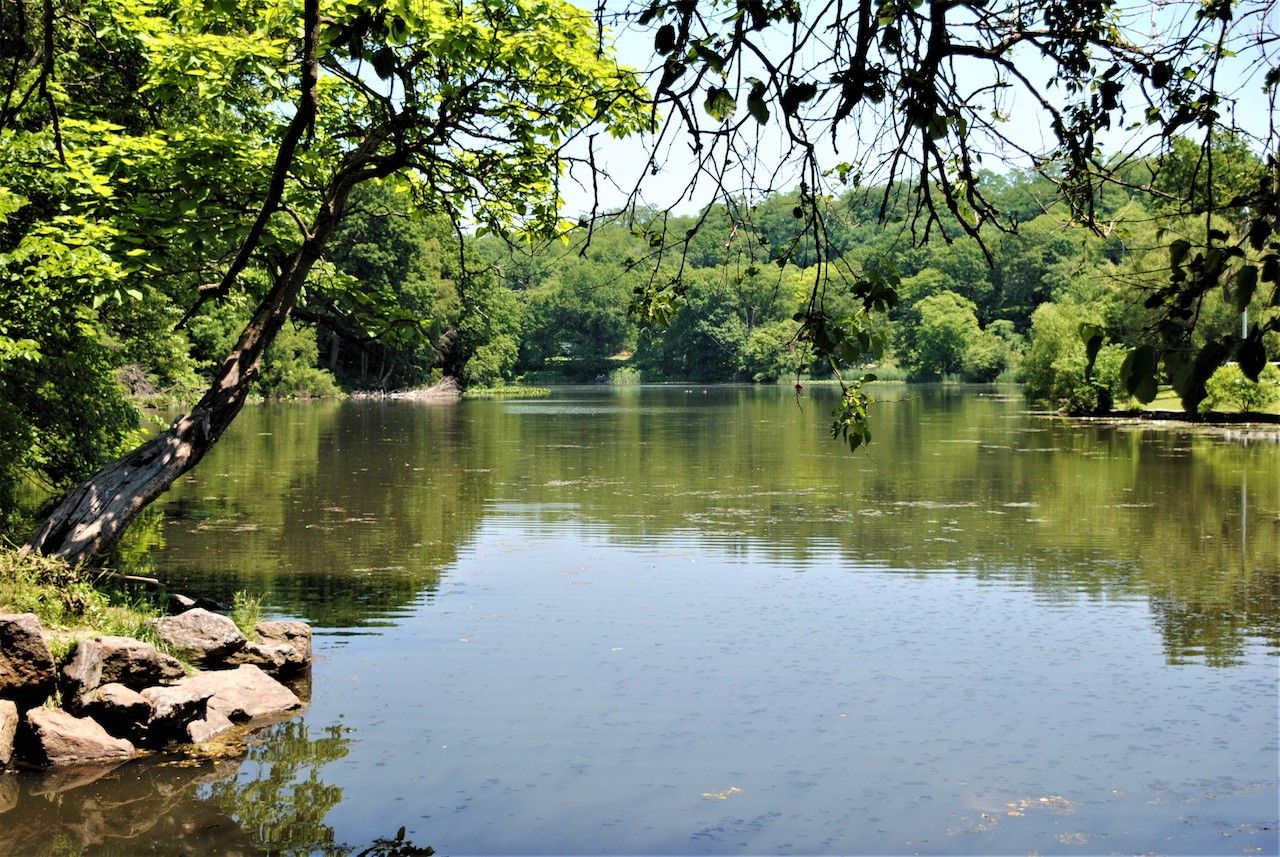 Over a thousand acres make up Van Cortlandt Park in the Bronx, making it New York City’s third largest park. The wide, open space means there’s plenty of room to plant yourself down and people watch without hordes of other tourists trying to get a perfect Instagram shot; you’ll be able to see local families having fun and going about their day-to-day lives. Make it a picnic by bringing food with you or stopping into one of the eateries that surround the park’s perimeter — we recommend Lloyd’s for some deliciously mouth-watering cake. There are a number of other things besides people-watching to do, as well. Van Cortlandt is home to the first public golf course in the US, five walking trails, the largest freshwater lake in the borough, horseback riding, and several sports fields ranging from basketball to cricket. Also found here is the Van Cortlandt House Museum, the oldest building in the Bronx having been built in 1748. Now a National Historic Landmark, it was the home of the prominent Van Cortlandt family, who were in the mercantile business, and was used during the Revolution by George Washington. 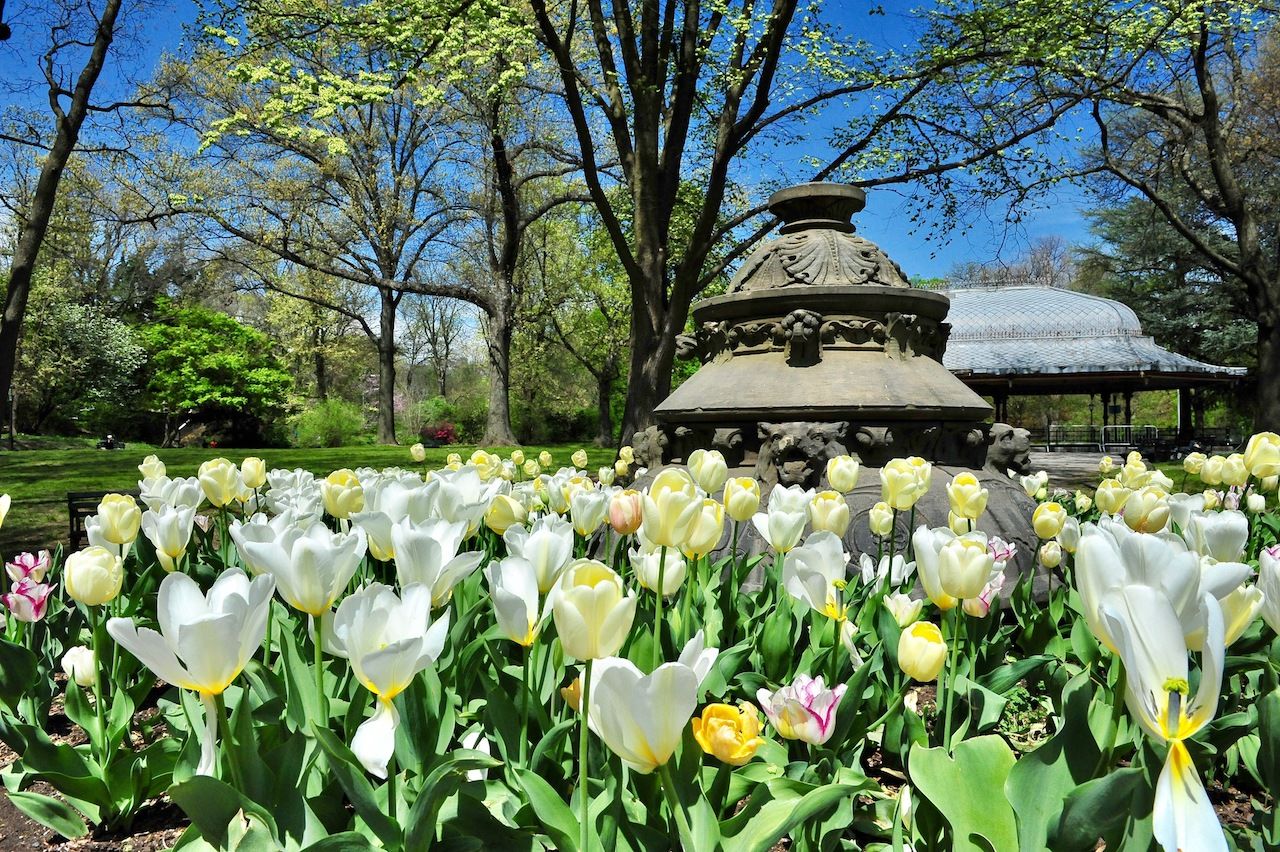 If you go to Brooklyn and want to visit an actual park with tons of green space, Prospect Park is the park to go to. Designed by the same team behind Central Park, it’s bordered by five different neighborhoods. It encompasses 585 acres, and there are a variety of activities to suit all ages. On one end is Grand Army Plaza, one of the first parts of the park to ever be built, which marks the beginning of the world’s first parkway. Across from it on the other end is the Brooklyn Museum, holding over a million different artworks and antiquities. Close by is the Brooklyn Botanic Garden, famous for its annual spring cherry blossom festival. For families with kids, there’s the Prospect Park Zoo and carousel. In addition, there are sporting facilities, walking trails, running paths, and scenic picnic areas. 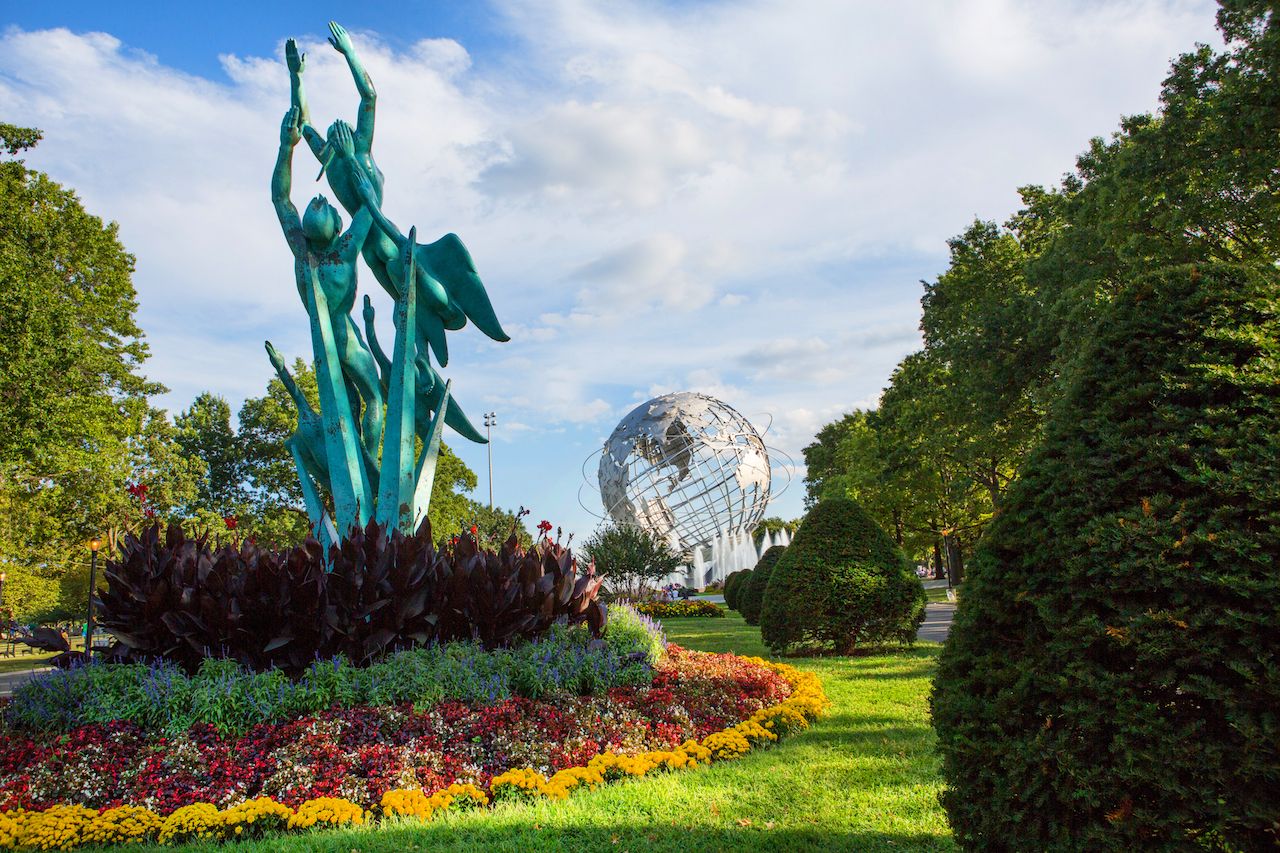 Flushing Meadows is beloved by the locals who visit it once the cold takes a hike, but it’s famously known by out-of-towners for the US Open Tennis Championships held on its grounds every year, as well as Citi Field stadium where the New York Mets baseball team plays ball. But besides national sports, the 897-acre expanse held the 1964-65 World’s Fair, where hundreds of businesses showcased different cultural and technological innovations. One of the remaining elements of it that you can still see today is the Unisphere, a giant stainless steel model of the Earth that was dedicated to the dawn of the space age as well as the fair’s theme of “peace through understanding.” Other than that, there’s the Queens art museum, the New York Hall of Science museum, an aquatic center, golf course, and a zoo. 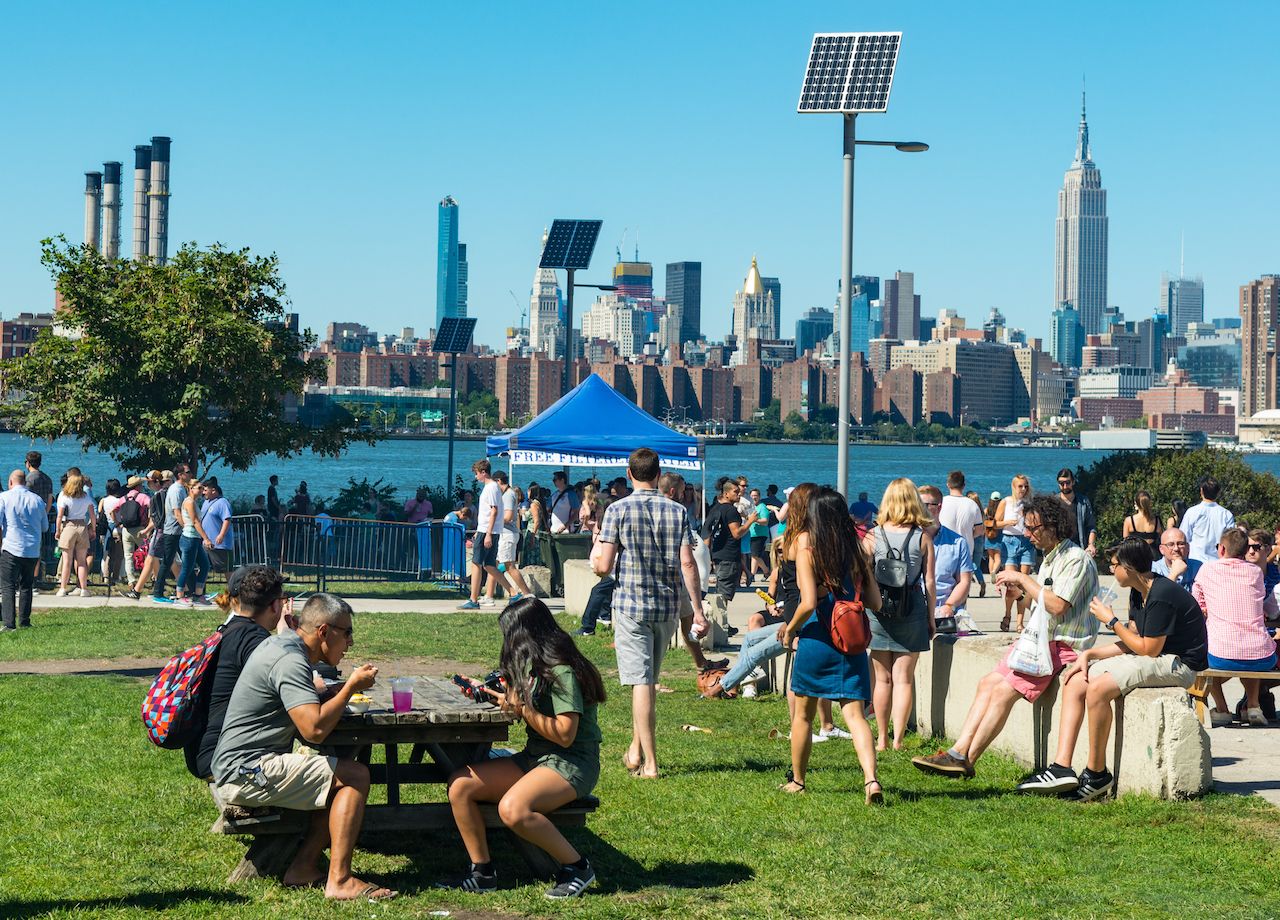 At 11 acres, East River State Park is unlike the other parks on this list. It’s small, but good things come in small packages. What this waterfront park lacks in size, it more than makes up for in gorgeous scenery as you’ll get quite the view of the Manhattan skyline. It’s a great area for a picnic or to just sit on the grass and soak in the atmosphere. You may want to hold off on bringing your own food, though, because once spring rolls around, the Smorgasburg food festival happens every weekend. The name is a combination of the word smorgasbord and Williamsburg, the neighborhood it’s held in, and it truly lives up to the name — over 100 vendors serving up food from across the globe, as well as new twists on classics, take part. The best advice: Come hungry.