The state of Oaxaca in Southwestern Mexico is known as a destination for people who plan trips around what they are going to eat, but the reason why often escapes the visitors who travel far enough south to actually sample it. This sierras-meets-sea locale is saturated with exciting cooking techniques and colorful ingredients like almost nowhere else in Mexico and the depth of flavors to be found are unparalleled. That’s why Oaxacan food has such a well-deserved reputation for deliciousness.

Cookbook author and Chef Susana Trilling of the Seasons of My Heart Cooking School tells Matador Networ that she likes to describe Oaxacan food as “esoteric.” And she would know, having spent nearly three decades immersing herself in the traditional recipes and cooking styles of Oaxaca. Even today, she stumbles across new-to-her techniques and recipes that have been lingering on this landscape for thousands of years. She’s not alone, either.

It is Oaxaca’s landscape that is in large part to thank for these culinary traditions and all of the souls who are passionate about food that it attracts. Three mountain ranges and a steamy Pacific coastline slice and dice Oaxaca into eight distinct regions and many more microclimates. The diversity of the landscape has also served as the foundation for the wide range of ingredients, and therefore dishes, that vary by which side of what sierra you happen to be standing in.

“There are more traditions, more ingredients, and certainly more ways of cooking those ingredients than anywhere else in Mexico,” Oaxaca-born chef Rafael Villalobos Valderrama says.

We also can’t ignore the fact that Oaxaca has been the third poorest state in Mexico for decades. This, too, has played a part in the culinary traditions and characteristic resourcefulness when it comes to Oaxacan food and ingredients.

Heirloom corn, beans, squash, chiles, herbs, and greens are at the heart of the Oaxacan pantry. Take mole, for example. This dish often associated with Mexico as a whole is far more complex in a place like Oaxaca. And though the state may be nicknamed “the land of the seven moles,” in truth there are an infinite number of Oaxacan moles.

Iver González, executive chef at Parador San Miguel in Oaxaca City, emphasizes that it’s the nuanced ingredients that can vary by region, season, culture, and recipe that make moles from Oaxaca a cut above those coming out of kitchens anywhere else in Mexico.

As a general rule in Oaxacan cooking, everything seems to be fair game. There are wild mushrooms and greens, like pitiona (lippia alba), cedrón (lemon verbena), hoja santa (Mexican pepperleaf), and epazote (an indigenous herb), to edible insects like chapulines (grasshoppers), chicatanas (flying ants), and gusanos de maguey (grubs that live on agave plants that are dried and mixed into salsas and sal de gusano, or worm salt). Huitlacoche, the fungus that grows on ears of corn, is often added to Oaxacan antojitos (masa-based snacks) as a topping.

You’ll spot flor de calabaza (squash blossom) floating in soups, atop memelas, or inside still steamy quesadillas, while no preparation of black beans in a Oaxacan kitchen is complete without the addition of hoja de aguacate (avocado leaves). And when it comes to proteins that aren’t of the insect variety, Oaxacan cuisine’s go-tos are tasajo (salt-cured beef), cecina (grilled pork either salted or marinated in chili), chorizo oaxaqueño (pork sausage prepared with chili, vinegar, and spices), rabbit, iguana, and a year-round supply of dried shrimp, among others.

These are five dishes you’ll the best versions of in Oaxaca with long histories and strong ties to the region. 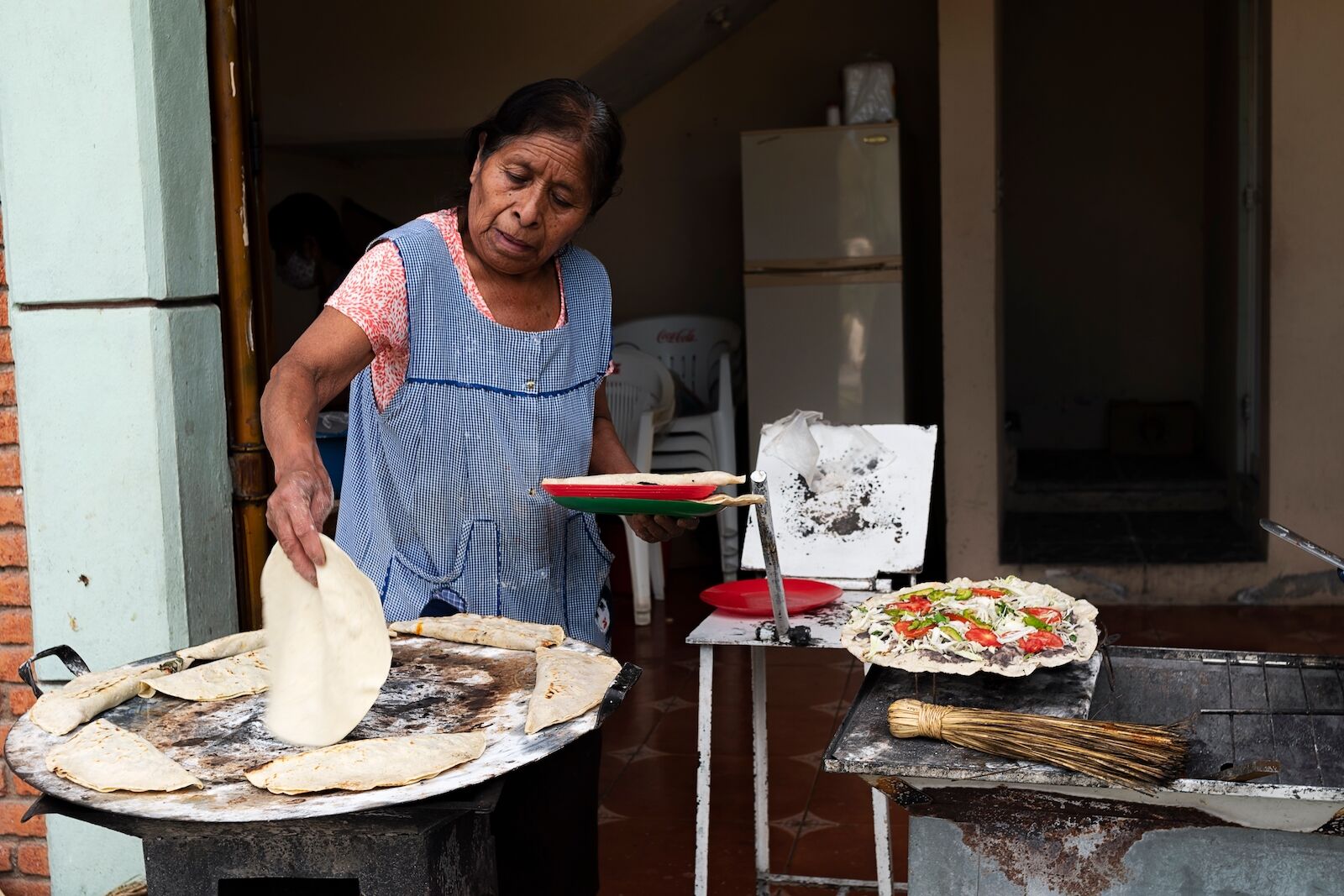 The base of this Oaxacan street food and late night staple is a colossal and crispy tortilla known as a tlayuda. It’s layered with asiento (the pork fat leftover from cooking fried pork rinds) and refried beans. Then, a combination of shredded lettuce or cabbage, tomato, and quesillo (a string cheese-like Oaxacan delicacy) is added before it’s cooked on the comal (a flat griddle quintessential to Oaxacan cooking). Layer it up more with those distinctly Oaxacan proteins like chorizo oaxaqueño, tasajo, cecina, or chapulines, and slather on the salsas before every single bite. 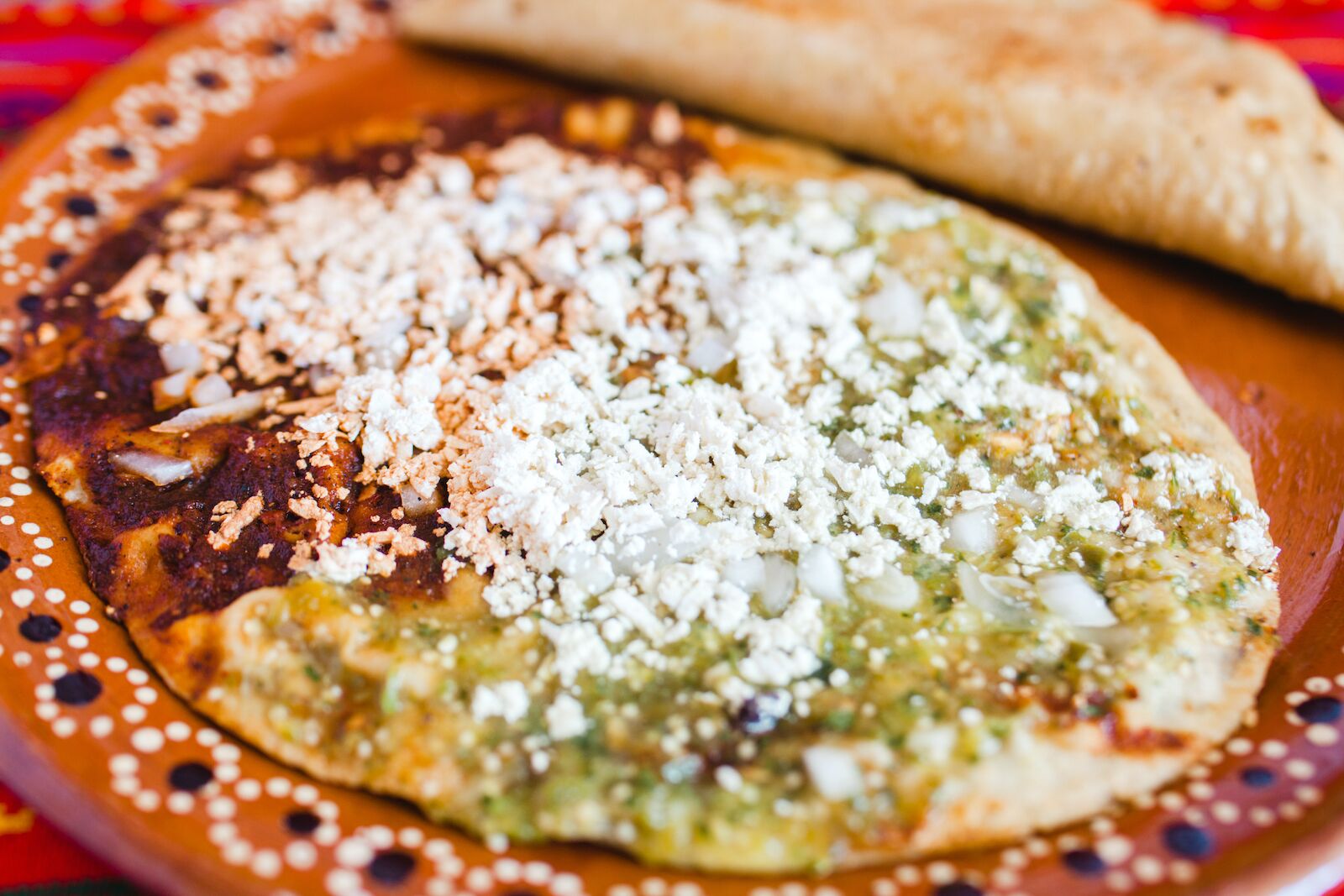 Memelas are a classic Oaxacan breakfast item served fresh off the comal at street food setups and market stalls all over the state. The memela in its simplest form is an open-faced maize tortilla dressed with asiento, refried beans, crumbled cheese, and salsa. These simple but delicious breakfast bites can be made more complex with toppings like huitlacoche (corn mushroom), nopales (the pads of the prickly pear cactus), and huevos al comal (eggs cooked on the comal), or wrapped in the aromatic hoja santa leaf. 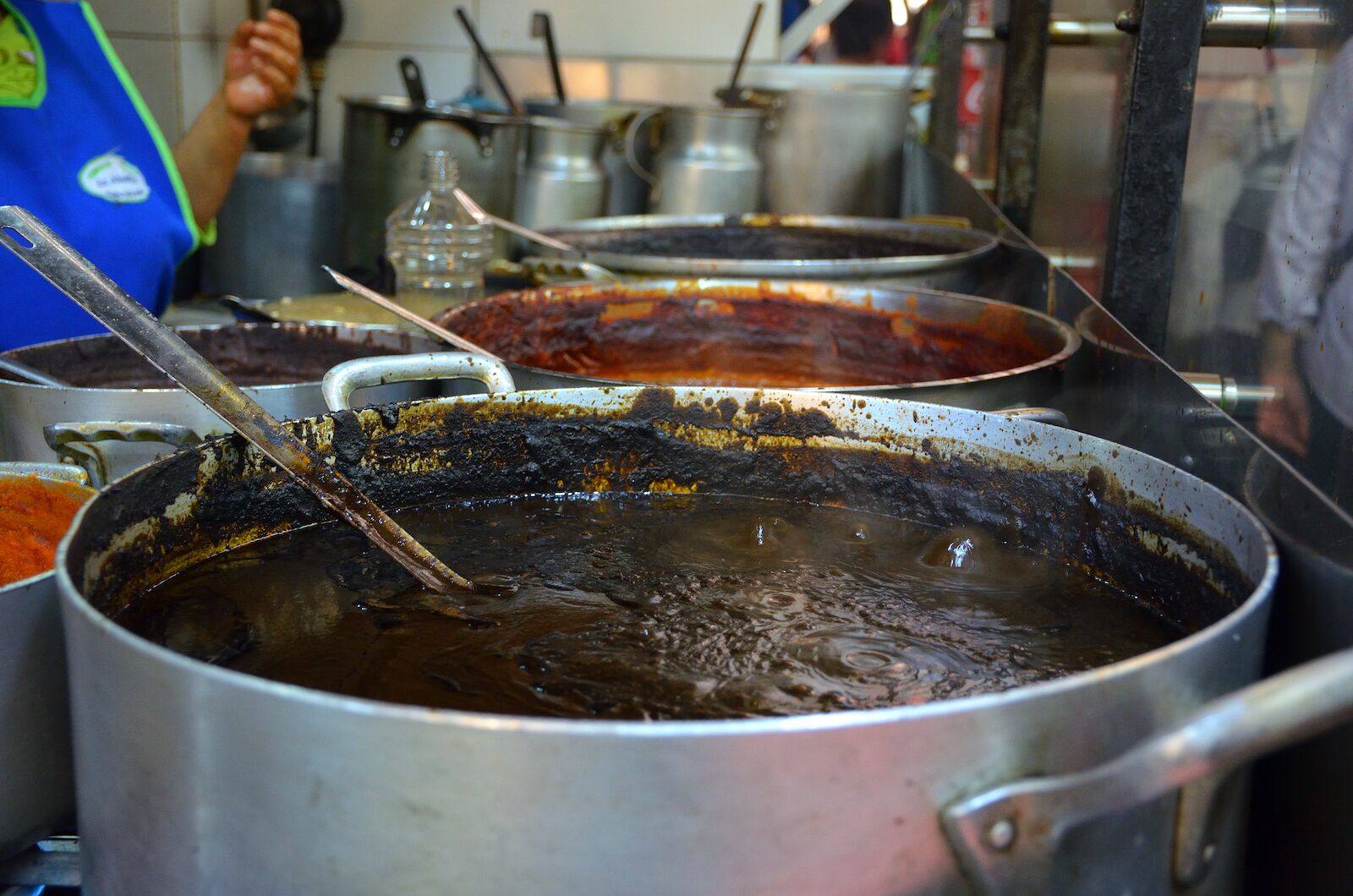 Traditionally more of a celebratory dish, mole (essentially a type of sauce and marinade) can always be found on a menu in Oaxaca these days. This chili-centric Oaxacan plate usually requires no less than a dozen different ingredients. The seven classic moles of Oaxaca are amarillo, chichilo, coloradito, negro, manchamanteles, rojo, and verde, though the rare Mixtec mole blanco should be added to the list as well.

And don’t forget there are yet thousands more varieties too, depending on who’s in the kitchen and where in Oaxaca you are. You’ll find the classic seven moles as a sampler flight at some restaurants in Oaxaca City or served inside of tamales and empanadas, poured over beef, chicken, and mushrooms, or as enmoladas, similar to enchiladas, only the fried tortillas are swimming in mole negro instead of mole coloradito.

Sopa de guías is a pre-Hispanic soup unique to the state of Oaxaca that is traditionally prepared during the rainy season when the ingredients are at their freshest. It’s made with nearly every part of the squash, from blossom to vine, as well as young corn rounds, garlic, onions, and chepil (a wild herb). There is another twist on this ancestral soup called espesado de sopa de guías de calabaza, where the cook will also grind fresh corn kernels into the soup to thicken it. Today, corn dumplings, called chochoyotes, are often added to the broth and a spicy salsa de chile bravo is served on the side to give this delicious soup some bite. 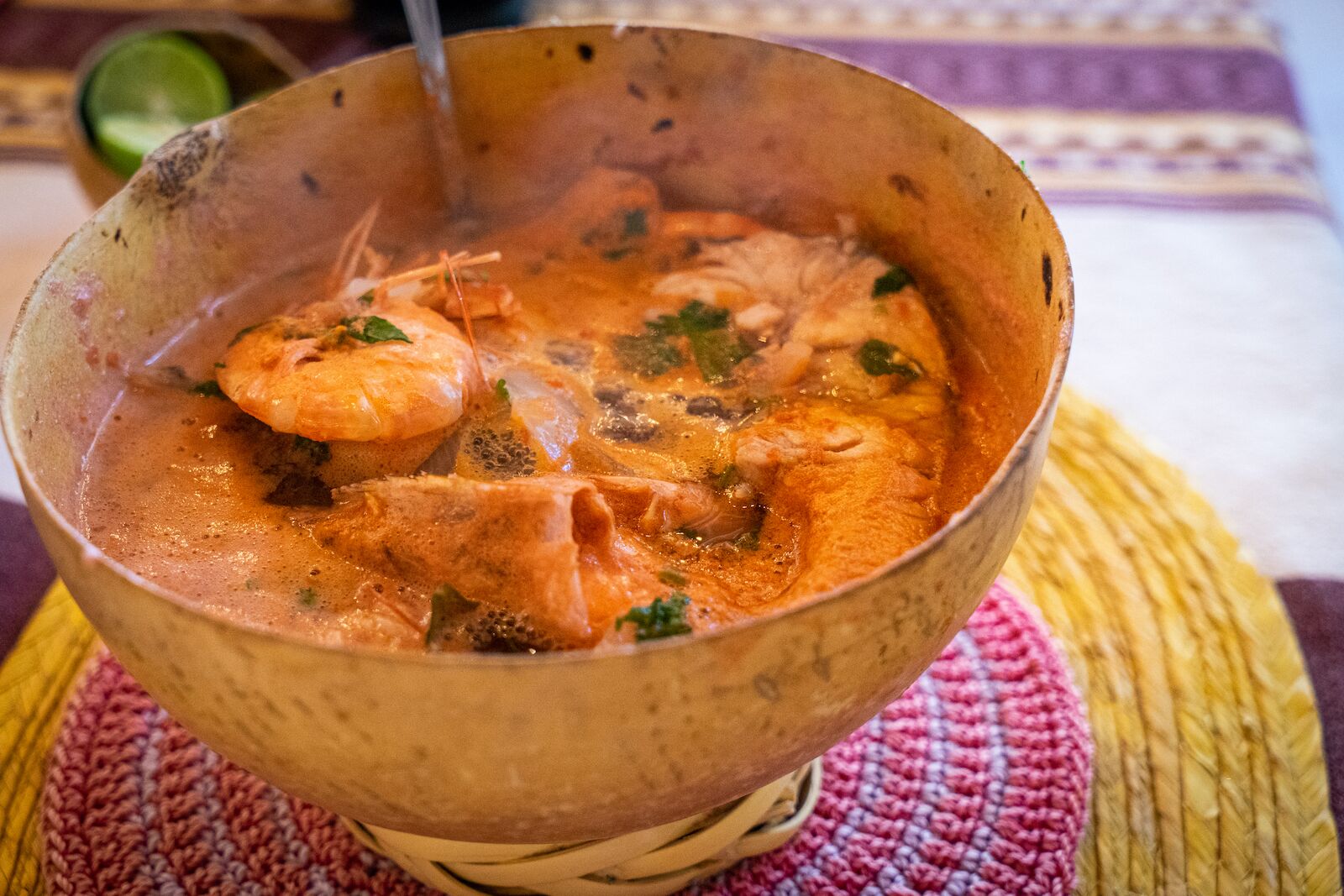 Caldo de piedra, another ancestral dish of Oaxaca’s pre-Hispanic past, is a fish or seafood soup attributed to the indigenous Chinantecos in the north of Oaxaca state. It’s cooked by the heat of fire-warmed river stones. Ancient and hyper-regionalized as this unique soup may be, it’s still found on menus throughout Oaxaca and Oaxaca City. Chef Salma Lopez of the popular seafood restaurant Humar in Oaxaca City shared with Matador Network that in traditional Chinanteco culture, this soup was prepared by the men for the women right on the riverbanks and in the natural basins that form there. The men would heat river stones in the fire they’d prepared and then place the hot stones into the fishy broth to cook the soup and its other ingredients, like tomato, wild onions, and epazote (wormseed).

NewsNew Interactive Maps Document the History of Mexican Food in New York City
Tagged
Food + Drink
What did you think of this story?
Meh
Good
Awesome

Life in Oaxaca and the Many Layers of Travel