Mole is one of Mexico’s most complex and historic sauces. The name comes from the Nahuatl word molli, and it refers to a category of viscous sauces (salsas espesas) that can have more than 30 ingredients. In Oaxaca, known as the Land of Seven Moles, these sauces range in flavor, color, and popularity, but they all inspire (in the eater) a passionate allegiance to undermine the minimalist cooking movement.

Mole can be spread over pretty much anything, but one of the most traditional uses is to put it over turkey. Just like the mole itself, the turkey has extra layers of complexity. Fourteen days before slaughter, the turkey is gradually fed almonds — this gives the meat a nutty flavor. It’s up for debate if this was ever a part of the original mole-making process, but at the very least, it shows the time, energy, and thought that goes into making this fantastically complex dish.

Aurelia, a chef in Oaxaca, tells me that people associate mole with an intricate dish, a Berlioz-like symphony, that brings together over 30 ingredients to create something unified and harmonious. She speaks while gesturing toward her table, which is robust and runs the length of her kitchen. The mole-making process begins in the market, but the table is at the heart of a mole. Aurelia thinks about moles as the sum of their parts, and uses a taxonomy of ingredients, which she classifies based on processes.

While each mole is made slightly different depending on who is making it, which part of the country you’re in, and what ingredients are available, Aurelia walked me through the basics of Oaxaca’s seven most famous moles and the chilies that define each.

Thirty ingredients take over the surface of Aurelia’s table when she makes mole negro, the most elaborate, intimate, and time-intensive of all the moles. She groups spices next to piles of nuts; sweet ingredients near acidic ones; chilies commingle near the chocolate; and bread, tortillas, and animal crackers find comfort near one another.

Cynosure ingredients differ from mole to mole, but in Aurelia’s kitchen, there is a constant: Aurelia saves the center of her table for the most idolized ingredients. With mole negro, chocolate and carbonized chilies are at the center, both of which are pre-Hispanic relics that give the mole its signature deep color. 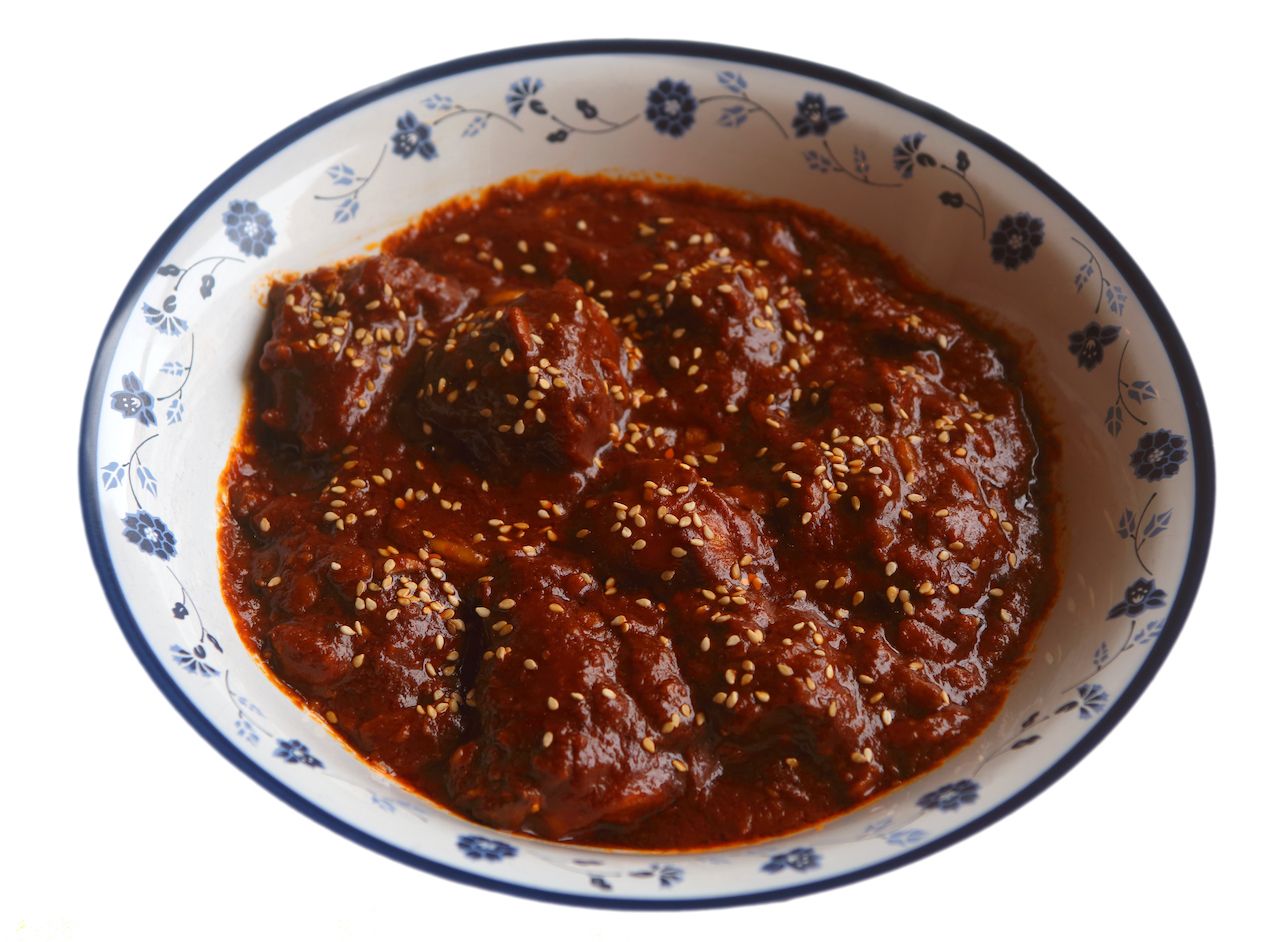 Aurelia explains that with mole rojo — the spiciest of the seven moles — chilies and sesame seeds are awarded the venerated spot at the center of her table with roughly 20 other ingredients strewn around them. Unlike the chilies in mole negro, chili ancho and chili guajillo are lightly toasted, which preserves their red color.

The sea of brick red is served with pork and speckled with toasted sesame seeds, which, like properly used truffles, can elevate the gustatory sparkle of a bite.

“With mole, knowing how to wield a tortilla, how to fold it or wrap it, is the most important part of the mole eating process,” Aurelia says. “The malleability of the tortilla allows the gourmand to meticulously swab out the mole trapped in the porous earthenware dish.”

With mole coloradito — the sweetest of the moles — bananas, raisins, and cinnamon are the central ingredients along with the chocolate and chili ancho toward the center of the table. The creamy consistency of mole coloradito is often found coating the outside of enchiladas served for lunch in markets.

When Aurelia prepares mole amarillo, she fans out the large heart-shaped hoja santa (Mexican pepperleaf) leaves on the table next to the chili guajillo. Imagining the forest green of the hoja santa next to the deep maroon of the chilies, one begins to understand how mole amarillo gets its color, which is more orange-brown than it is yellow.

This stirringly earthy mole often makes its way out of restaurants and homes and into the streets. Food vendors generously pour mole amarillo over shredded chicken sparsely placed on elongated corn tortillas, then baptize it with flecks of cilantro before folding the tortilla over itself to create an empanada.

When preparing mole manchamantel, Aurelia places fresh pineapple and sweet plantains at the center of the table, where these ingredients await patiently until the mole is done cooking. The fruit is delicately placed, like precious jewels, over the mole-covered chicken. The saccharine bursts of flavor from the chunks of pineapple and sweet plantain balance the sharp taste of chili ancho.

Aurelia explains that mole chichilo is the rarest and most difficult of the moles to find in Oaxaca. This is due to the prized chilhuacle negro chili used to make it, which is difficult to find outside of Oaxaca.

Mole chichilo is the least sweet of the moles and leaves an anise-licorice flavor that lingers on the back of one’s tongue. 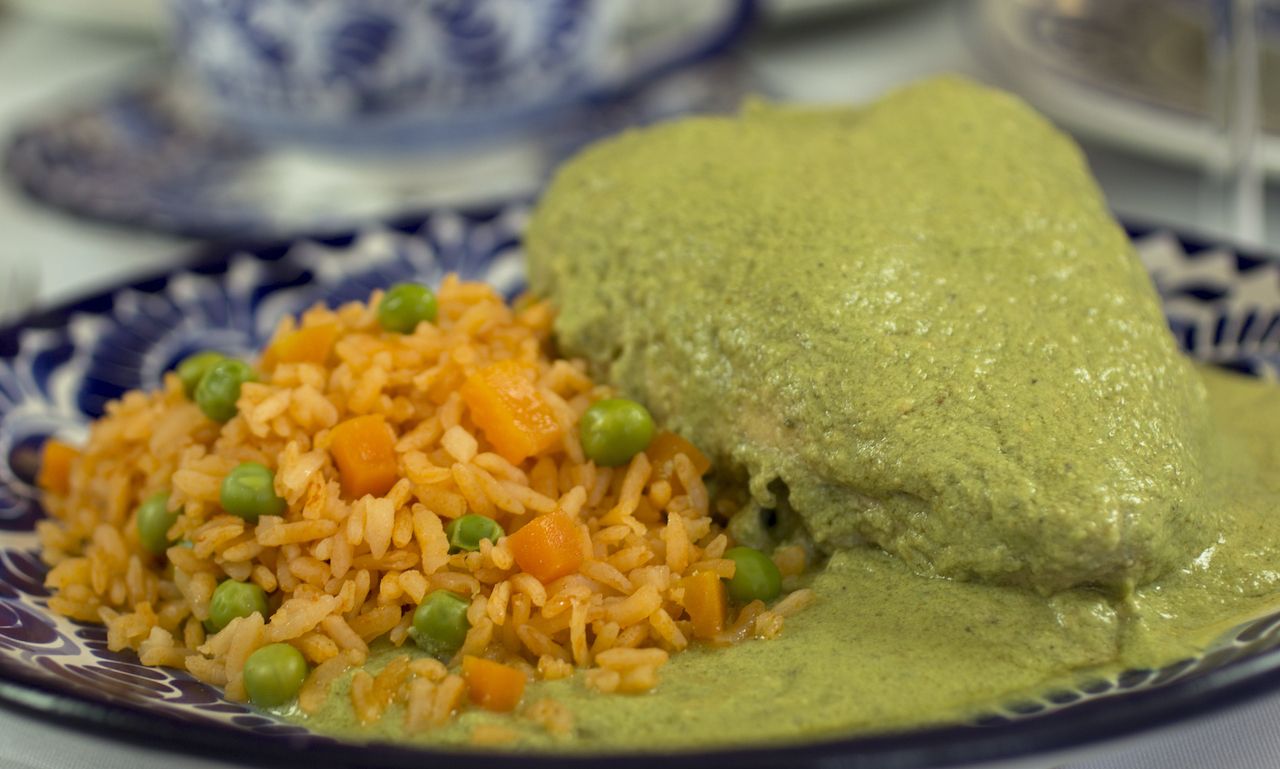 The focus of mole verde is on pumpkin seeds and the jagged, pungent leaves of the epazote herb. Of the seven moles, mole verde is the only one that does not contain dried chilis. It’s often found covering pork and seafood.

Moles carry the passion and affection that each cook imparts to the dish. “I watched my mother prepare mole,” Aurelia says, “but my mole will never taste like hers.” When I ask why, she smiles and says, “some things can’t be taught, they come from the heart and from patience, perhaps it is because it took my mother four days to make mole negro, while it only takes me two, or maybe it’s because I listen to my favorite music when making mole and my mother made hers in silence.”

Food + Drink11 Pre-Hispanic Dishes That Show Oaxaca Is the Cradle of Mexican Food
Tagged
Food + Drink Mexico
What did you think of this story?
Meh
Good
Awesome