Mexico’s diverse culinary landscape has traces of the many cultural groups that have shaped the region’s history. There’s pan dulce, or sweet bread, which is based on the bread 17th-century French bakers brought to Mexico, and the quintessential tacos al pastor inspired by the shawarma that Lebanese immigrants introduced at the turn of the 20th century. Then there are the crops, animals, and cooking techniques introduced by the Spanish.

While today’s Mexican food is a hybrid, it still abounds with dishes, ingredients, and techniques that predate European colonization. The state of Oaxaca is one of the best places to see this cuisine. Oaxaca has Mexico’s largest indigenous population, and the traditions maintained by its 16 indigenous groups represent a cultural heritage that spans thousands of years. In addition, the state’s varied microclimates allow it to produce a wealth of native plants and herbs that contribute to the diversity of its cuisine.

Stroll down Oaxaca’s streets or into its kitchens and you’ll find elements of the state’s indigenous heritage in everything from the use of ancient cooking techniques to traditional ingredients. Whether you’re eating from a market stall or at an upscale restaurant, chefs will use a molinillo (wooden whisk) to create foam over hot chocolate and a molcajete (stone mortar and pestle) to grind salsas and pastes. Tortillas are cooked over the comal (flat griddle), often over a traditional wood oven that’s fanned by woven palm fronds. Pre-Columbian staples like chiles, tomatoes, corn, beans, and squash continue to form the backbone of the cuisine, and many of the state’s most famous foods, like mole and chapulines (grasshoppers), have been prepared since pre-colonial days.

These are the 11 foods with pre-Hispanic origins not to miss in Oaxaca. 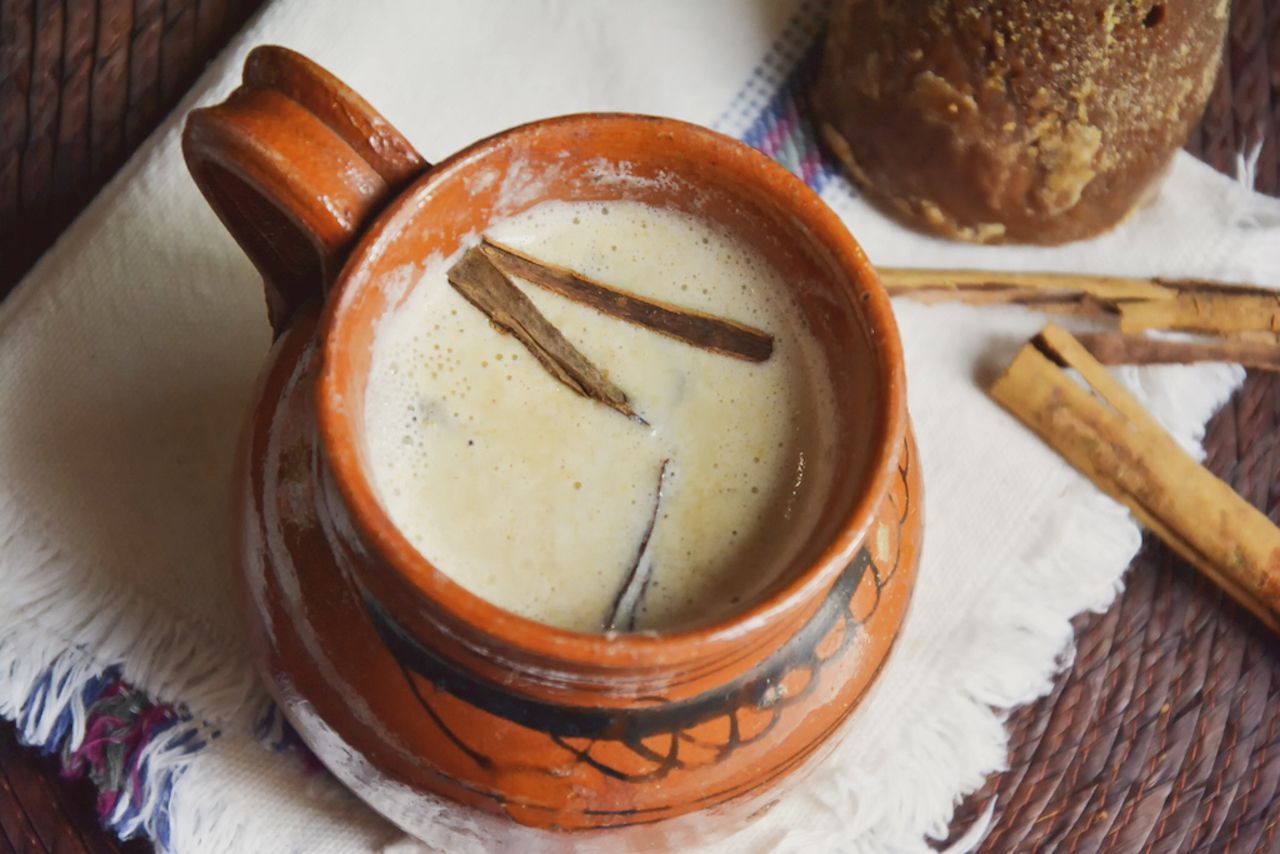 It’s hard to overstate the role that corn has played in Mexico’s history. It’s said that sin maiz no hay pais — “without corn, there’s no country.” Mexico’s indigenous people were the first to domesticate the plant, turning it from a wild, inedible weed into the staple food of an empire. The earliest known maize domestication was in the Guilá Naquitz Cave in Oaxaca.

In Mexico, corn is consumed in everything from tortillas to pozole soup. It’s also the basis for many drinks, and atole is a wonderful way to enjoy it in liquid form. The hot, frothy drink has a porridge-like texture and is sweetened with cinnamon and piloncillo (unrefined cane sugar). It’s a soothing way to warm up on a cool morning, best accompanied by a piece of pan dulce or a tamale. You can try its cousin, champurrado, which is prepared similarly but adds chocolate. 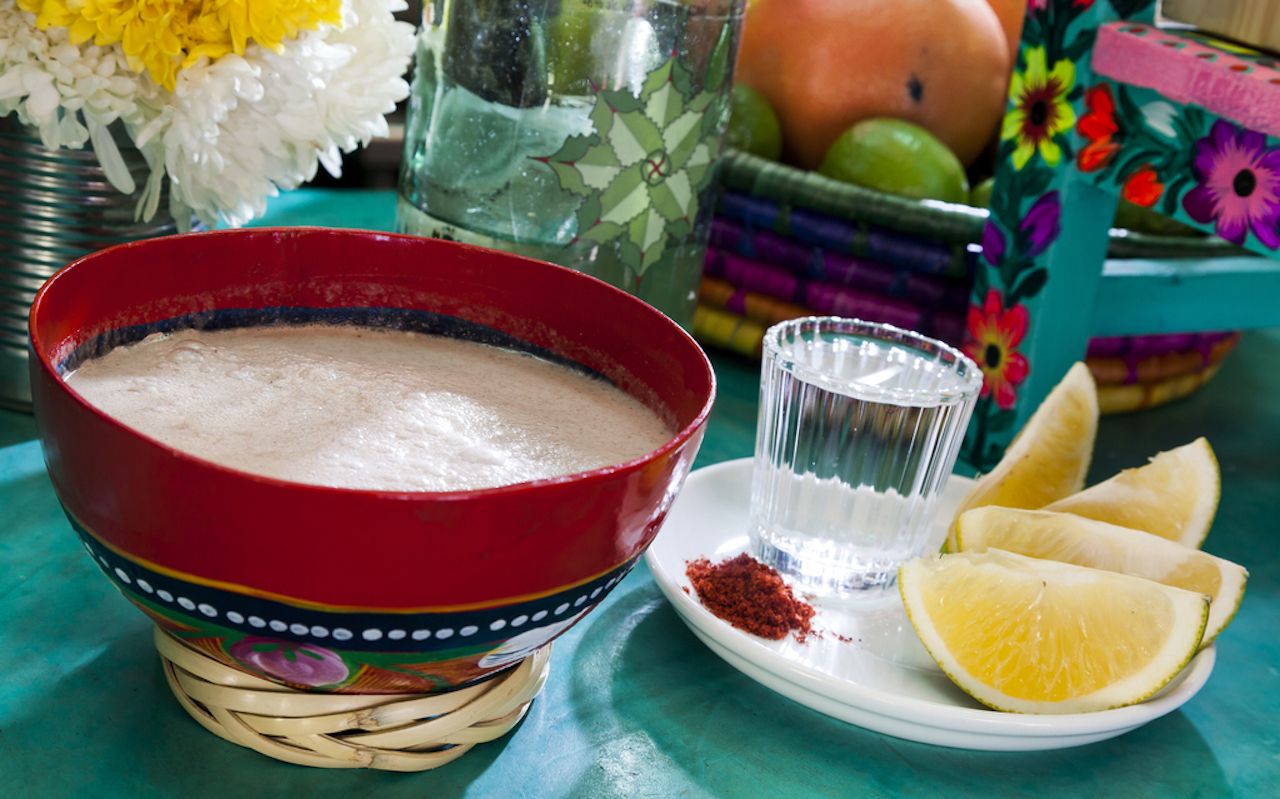 Another corn-based beverage not to miss is tejate, a drink that’s native to the village San Andrés Huayapam, just outside of Oaxaca City. Made from toasted corn, fermented cacao, mamey pits, and cacao flower, the non-alcoholic drink is known as the beverage of the gods due to its role in Mixtec and Zapotec rituals. After the ingredients are ground and mixed by hand, the result is a refreshing drink with a subtle cacao flavor and a frothy foam on top. You can find it at market stalls, in Oaxaca City’s Zocalo public square, and along the touristy walkway that runs through the city center. 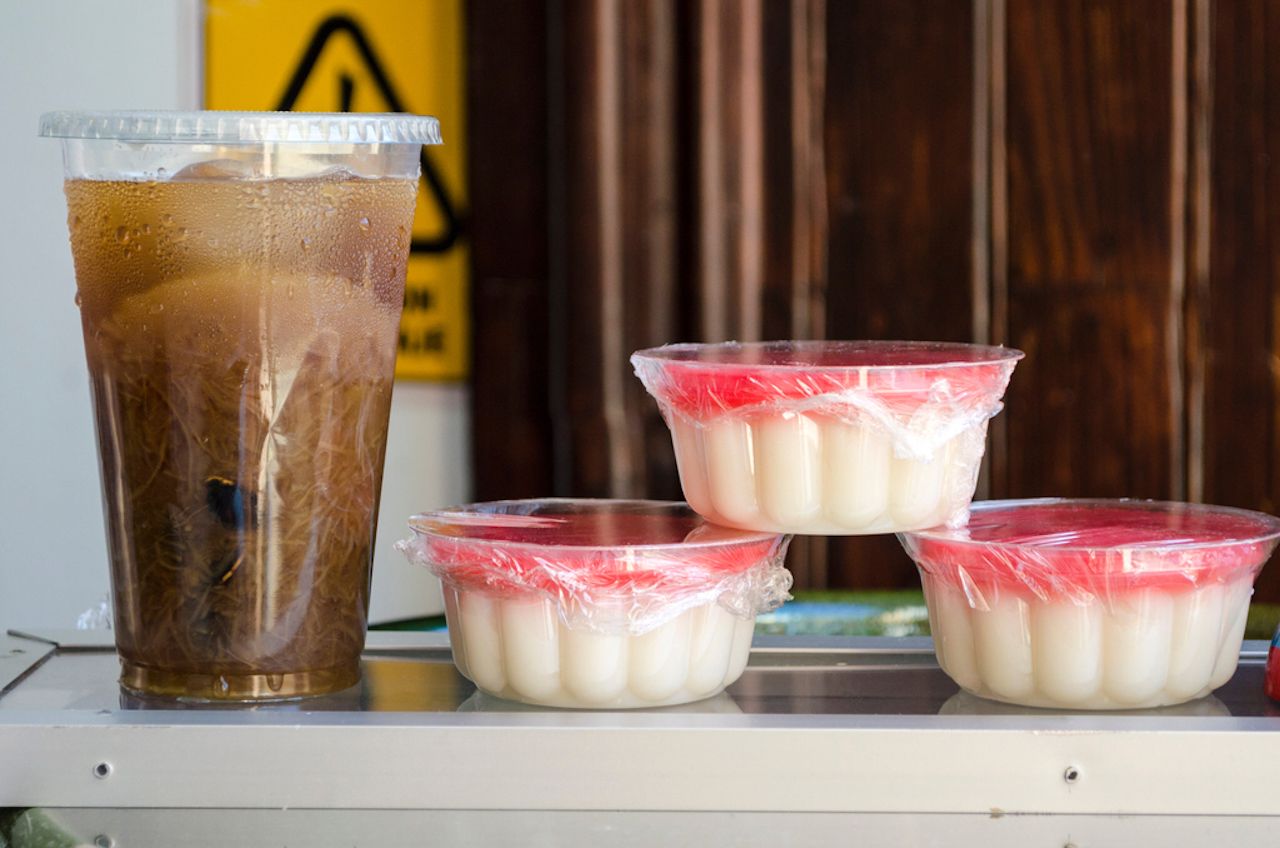 Nicuatole is a popular Zapotec dessert. The name comes from a combination of the Nahuatl words necuatl or necutli, meaning syrup, and atole. The slightly sweet gelatin has a corn base and a flan-like texture. While it’s commonly sweetened with sugar, its pre-Columbian iteration used maguey syrup as a sweetener. It’s commonly sold as a snack at markets or on the street and can be flavored with pineapple, coconut, mango, nuts. 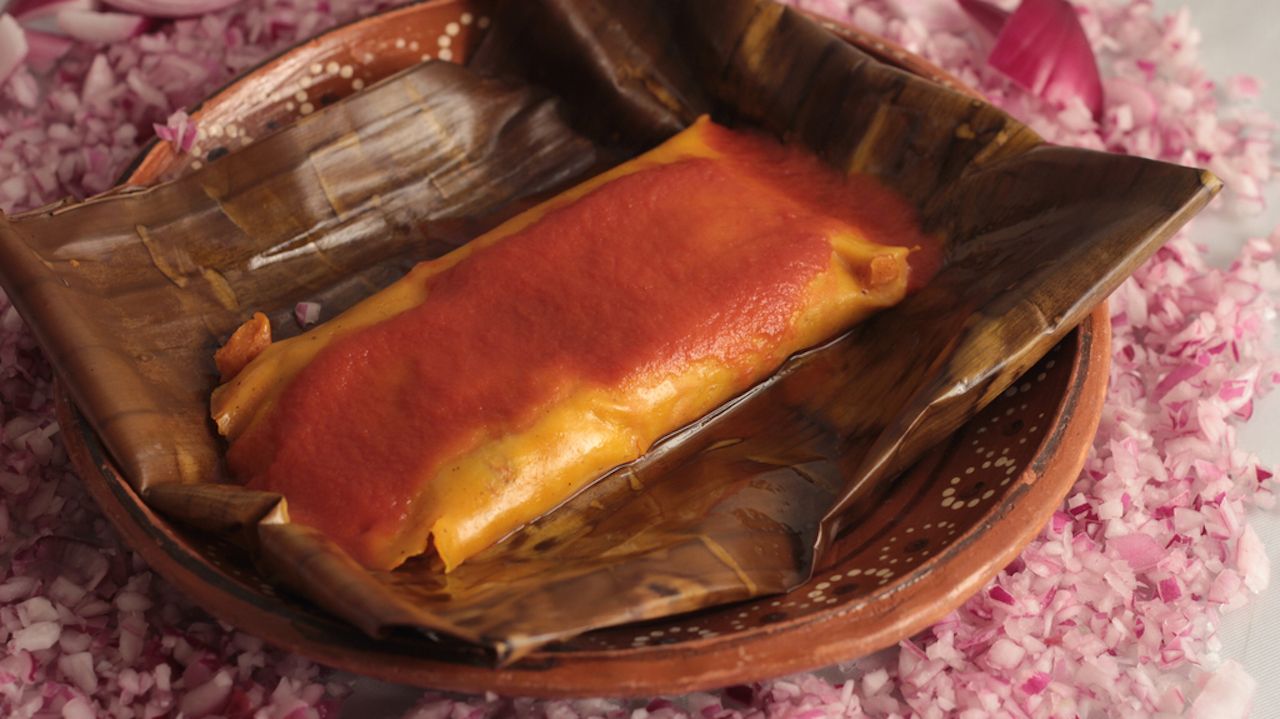 One of Mexico’s most iconic foods is the tamale. The name comes from the Nahuatl word tamalli, meaning “wrapped.” During the pre-Hispanic era, tamale-making was highly ritualized with different ingredients corresponding to different seasons of the year. On the Oaxacan coast, tamales were made with shrimp, pumpkin seeds, and hierba santa, a common herb. The arrival of the Spaniards brought additional fillings like pork and cheese. You’ll find many varieties of tamales in Oaxaca. The most popular ones are filled with beans, avocado leaves, jalapeños, cheese, and different flavors of mole. And then there are the exquisite tamales Oaxaqueños, or Oaxacan tamales, which are wrapped in banana leaves and filled with chicken, turkey or pork, and mole negro. 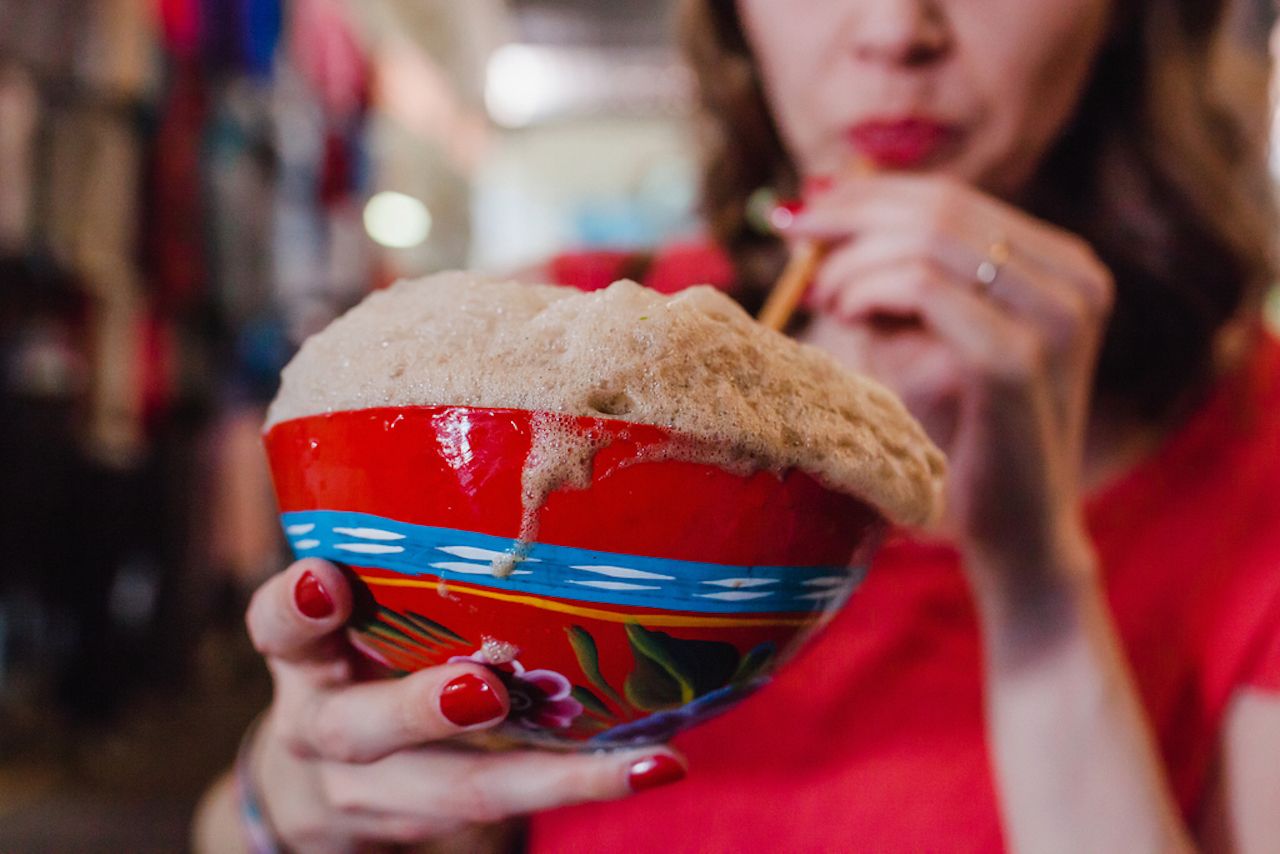 A staple breakfast in Oaxaca is chocolate (pronounced chocolate-ay), which is essentially hot chocolate. It’s made from a blend of ground cacao, sugar, almonds, and vanilla, and prepared with either milk or water. The Olmecs were the first cacao producers, and before the conquest, cacao-based drinks were prepared throughout the Americas using a blend of cacao with vanilla and chile. The most traditional way to consume chocolate is with water as milk and sugar were additions from the Spaniards. Be sure to eat it with sweet bread, such as pan de yema (egg yolk bread).

Hailing from the Chinantec region in northern Oaxaca, sopa de piedra, literally “stone soup,” comes from the indigenous community of San Felipe Usila. The recipe has been passed down from generation to generation, and oral histories point to the soup as an important culinary innovation for the community. Piping hot stones serve as the cooking agent. They are heated until they turn bright red and then dropped into a broth containing fish or shrimp, chile, tomato, onion, and cilantro. The dish is rarely found on menus in Oaxaca City, but you can find it at Caldo de Piedra, which has eateries in Centro and the town of Tlalixtac de Cabrera. 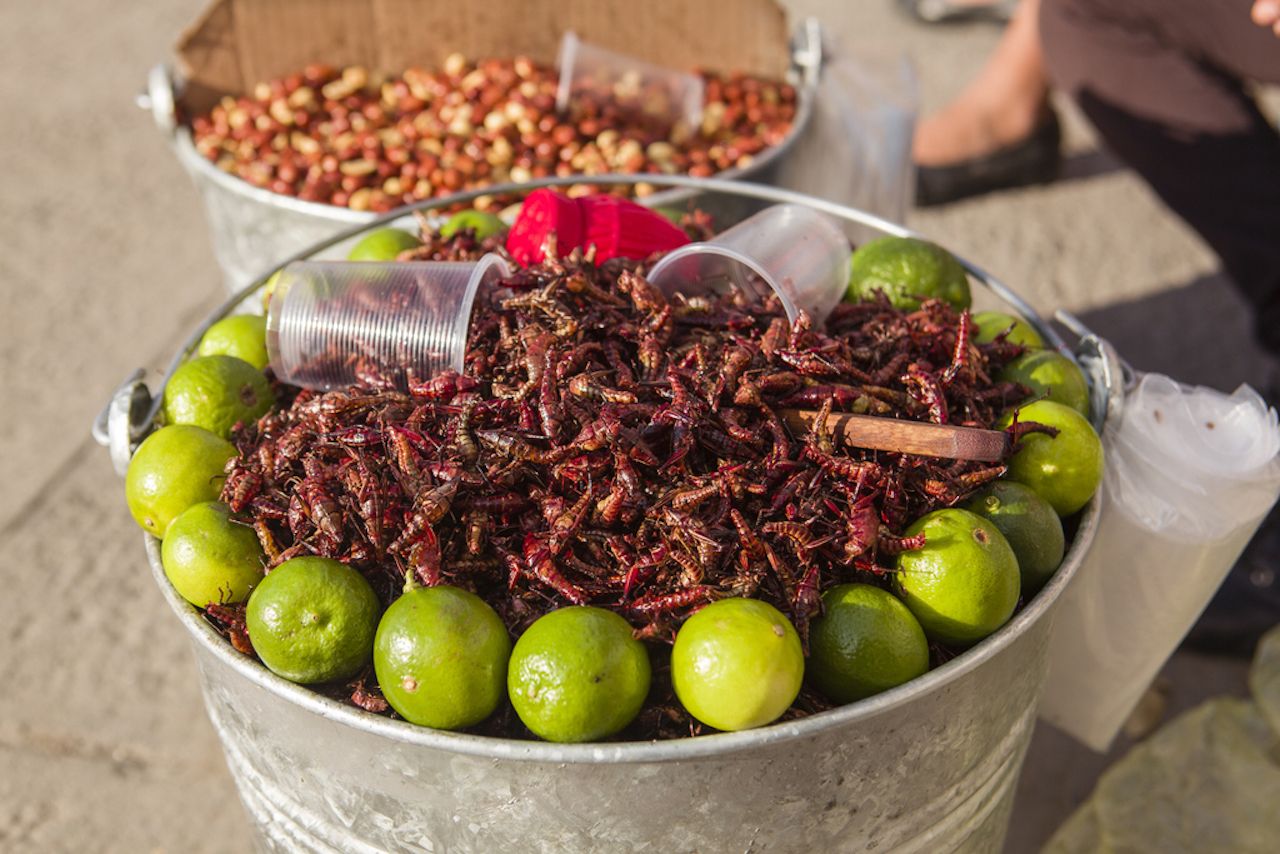 Chapulines, or grasshoppers, are an emblematic part of Oaxaca’s cuisine and have been eaten in the region for centuries. Prior to the arrival of the Spaniards, Oaxaca’s indigenous people didn’t tend pastoral animals like cows or sheep. Instead, they got their protein from the guajolote (wild turkey) and by consuming insects like grasshoppers. Crunchy and flavorful, chapulines are toasted and seasoned with chili and lime. They can be eaten solo or sprinkled over tacos or tlayudas — fried tortillas topped with beans, meat, and lettuce — and are frequently ground into a spicy salsa. To get a taste, head to the 20 de Noviembre market. Look for women who carry large baskets of them, or they’ll find you as you wander the stalls. 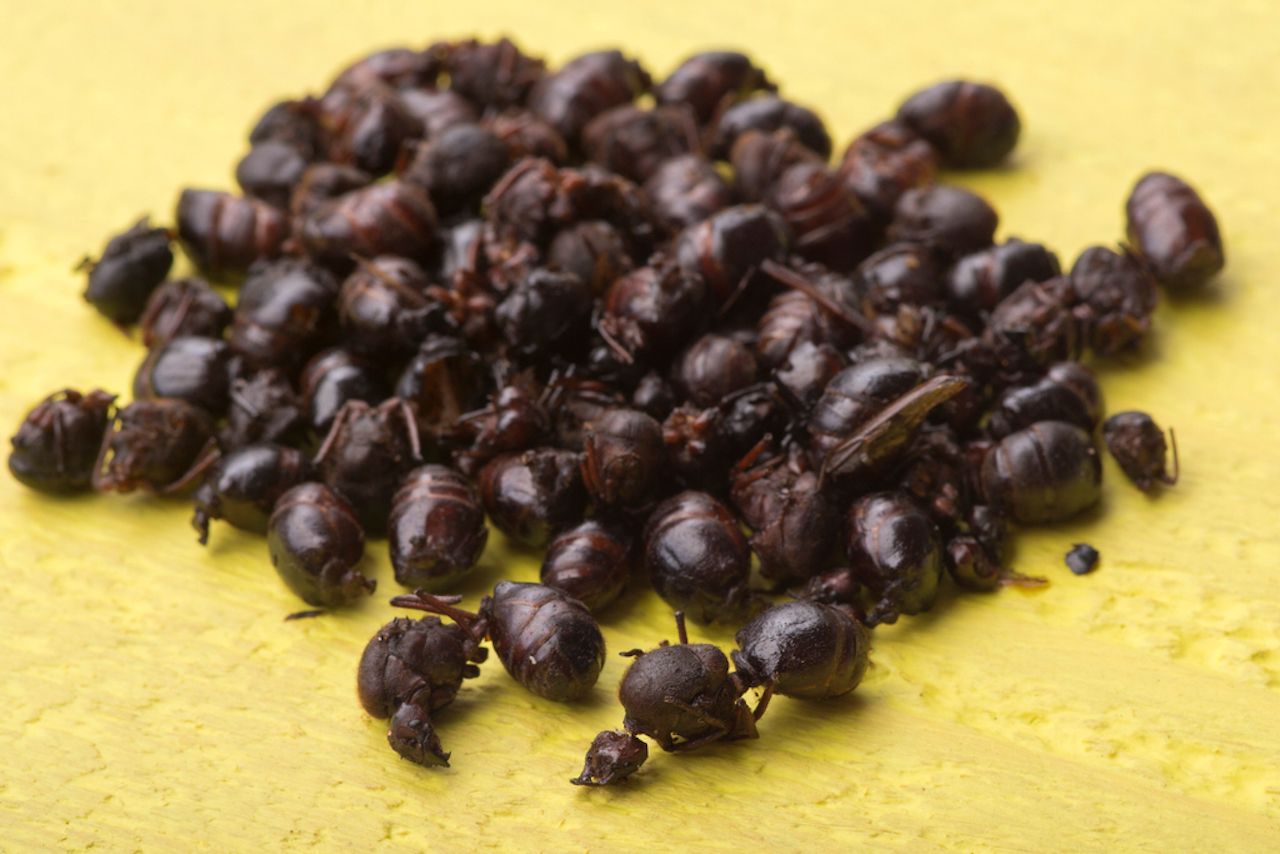 Grasshoppers aren’t the only native insect to be consumed in Oaxaca. Another seasonal delicacy is a variety of flying ants called chicatanas. After the first rains of the year, the ants come out in droves and are harvested during a period that lasts just one to 10 days. They’re then toasted on the comal with salt, lime, and garlic. Like chapulines, they can be eaten as a snack or ground into a salsa. Either way, they are considered a delicacy that can run $20/kilo.

While Oaxaca is a small state geographically, part of its gastronomical wealth comes from its many microclimates. In the tropical Isthmus of Tehuantepec, the region that connects Oaxaca to neighboring Chiapas, the Zapotec people have long enjoyed both iguanas and their eggs. The iguana meat is stewed with a mix of tomatoes, onions, garlic, and achiote. And during Holy Week in Juchitan, the largest city in the region, it is typical to see iguana egg tamales sold in the markets. 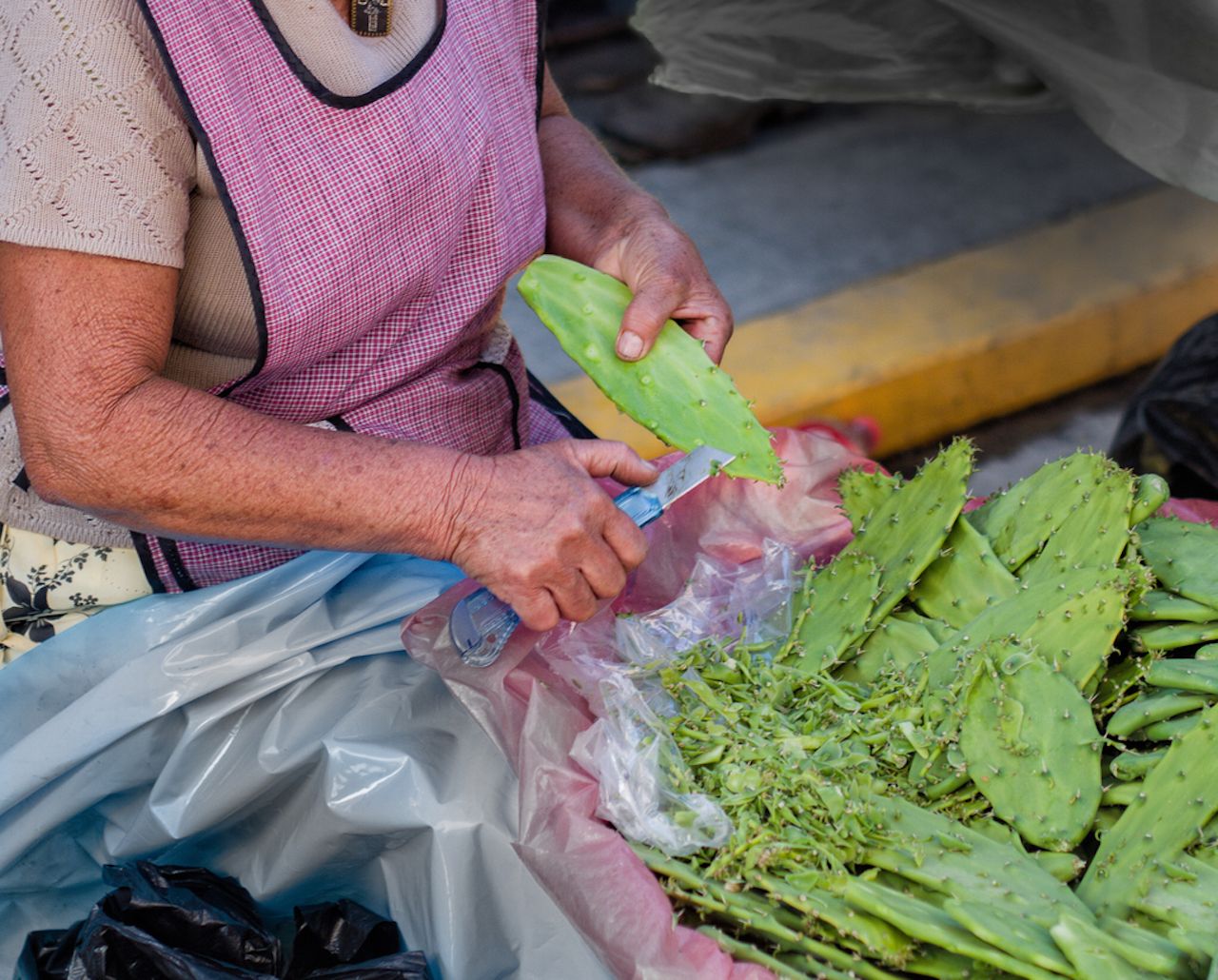 Nopales (prickly pear cacti) are a common pre-Hispanic food that can be enjoyed in many Oaxaca dishes. The paddles are picked while tender and may be sauteed and served with eggs (huevos con nopal), in salads, or in soups. Meanwhile, the tuna, or prickly pear fruit, has several culinary uses. You can eat the fruits whole while they’re green (they’re seedy but delicious) or enjoy them as a flavoring for nieves (ice cream) or horchata (a sweet rice milk drink). 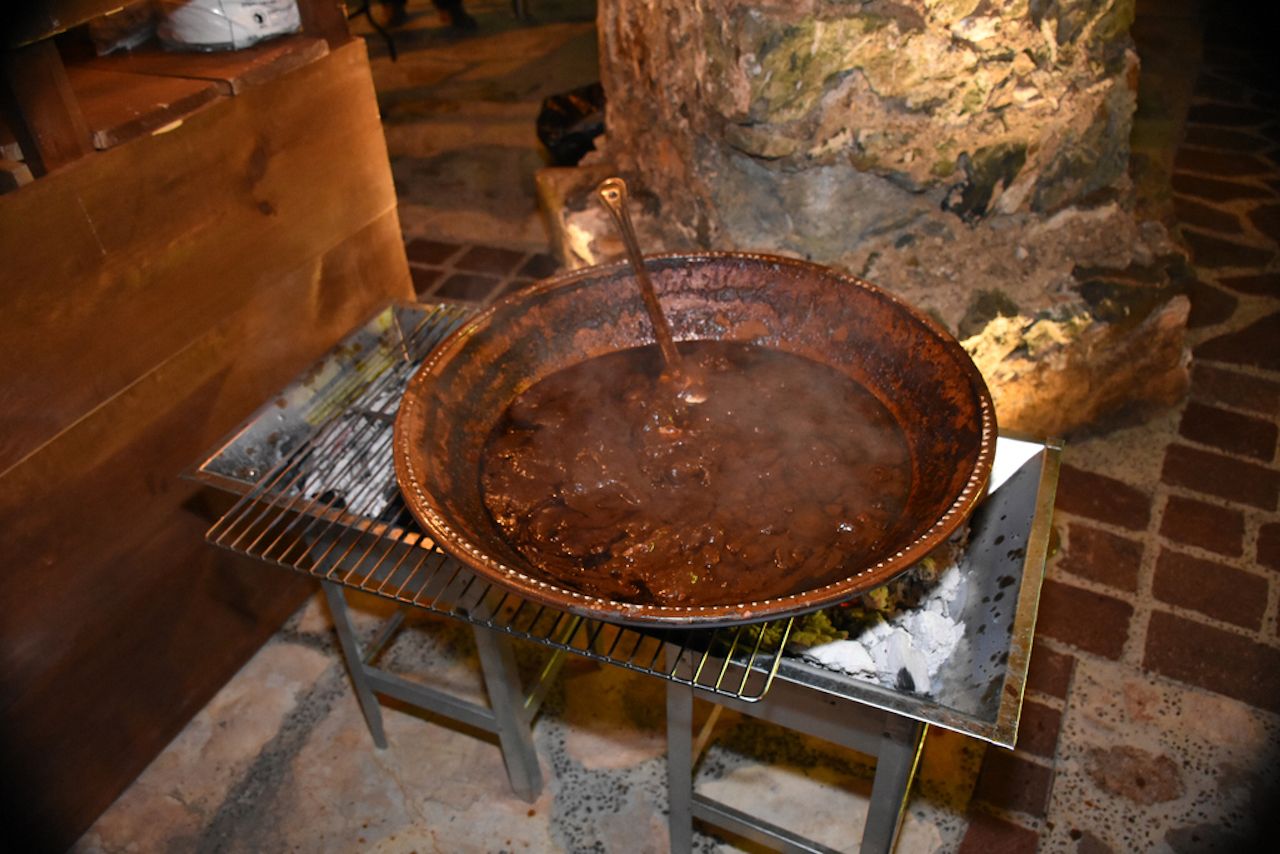 Oaxaca is often nicknamed “the land of seven moles,” and the diverse forms of this dish are a testament to the complexity of the state’s cuisine. Each variant of the sauce derives its flavor from a different chile combination, and many contain upwards of 20 ingredients — typically a laundry list of nuts, seeds, and chiles; toasted onion, garlic, and tomatoes; a piece of bread or tortilla; and perhaps some chocolate. Its preparation is notoriously lengthy and laborious, but once the flavors meld together, the result is unmistakably complex — rich, spicy, and a little sweet.

The word mole comes from the Nahuatl mulli, meaning mixture. The Spaniards documented a number of different moles, from a ceremonial dish served to the emperor Moctezuma to others prepared with ingredients still used today like chiles, tomatoes, and pumpkin seeds. While most Oaxacans consume mole as a staple dish at celebrations, you can find it on menus throughout the city, most often served with turkey over rice or stuffed into a tamale.

Food + Drink7 Traditional Dishes From the Yucatán Peninsula Better Than Tacos and Burritos
Tagged
Food + Drink Estado de Oaxaca, Mexico
What did you think of this story?
Meh
Good
Awesome

Love Stories From the Road: Chacahua

13 Reasons Why You Should Never Take Your Kids To Oaxaca, Mexico

The Culture of Carnaval in Oaxaca Is Hauntingly Beautiful