The Union Pacific Railroad hit Ogden, Utah, on March 8, 1869, forever altering the fate of what was until then a quiet town in the shadow of the Church of Latter-Day Saints. The influx of cross-country commerce that followed turned Ogden into a rail town in the truest sense — its Union Station dispensing traveling business people, laborers, tourists, and vagrants directly toward 25th Street, known as “two-bit” street for its reputation as a place where nearly anything could be bought for 25 cents. Running the heart of downtown, 25th Street in those days played host to numerous speakeasies, brothels, and two-bit motels.

In the near-century since a fire burned down the original Union Station in 1923, Ogden has boomed and busted, seen Amtrak move its northern Utah stop south to Salt Lake, and watched as Moab and Park City became the state’s beacons of outdoor recreation. Fragments of the 21st century were tough to swallow here, and by the time railway traffic had declined to freighters and vagabonds in the 1980s, many in Utah had written the city off.

It would be the Wasatch Mountains, rising to above 10,000 feet just east of town, and the efforts of a few local visionaries that would ensure those days were hardly the end of Ogden’s story. Skiing has a way of lifting a town up — psychologically and economically — as powder hounds from Aspen to Innsbruck can attest to. No city in the Intermountain West is more suited to a powder-hunting ski trip than Ogden. Snowbasin Resort and Powder Mountain, both an inning’s drive up Ogden Canyon from downtown, rank high among available terrain, powder, and ease of access.

In 2021, a new era is dawning at the base of the Wasatch. This city of 85,000 is settling into its future, one promising to be rich in powder days and open trails. It’s an easy road trip from anywhere in the West that’s best taken as winter crests in late February and begins its slow shift into the spring, and an icon of how other small cities can embrace their natural surroundings and flip the switch on the mountain-metro experience. When it comes to a Utah ski trip, move over, Little Cottonwood — it’s Ogden Canyon’s turn.

Snowbasin is worth building an entire trip around 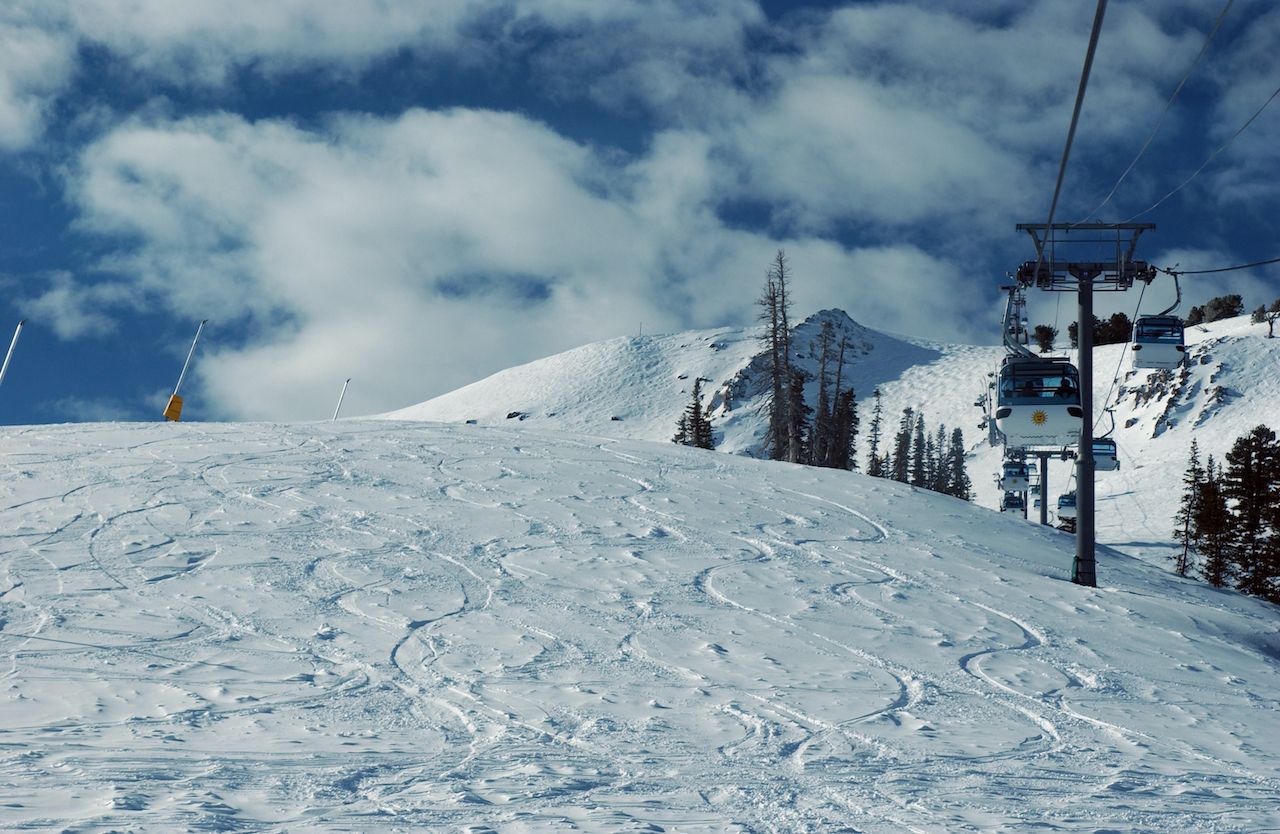 Snowbasin Resort is 30 minutes from 25th Street, an easy drive up Ogden Canyon during which it’s impossible not to smirk at those stuck bumper-to-bumper in Little Cottonwood Canyon. With 3,000 vertical feet and 3,000 acres of terrain, Snowbasin is massive — from its apex atop the Allen Peak Tram, you look down upon Ogden and can actually ski a challenging backcountry run to town, if you have the necessary gear and chops.

The runs here are wide and steep, edged by pine and brush that make for solid glade skiing if you wish to dip off the normal pistes. The Needles Gondola, Wildcat Express, and Becker lifts offer access to intermediate and upper-intermediate terrain ideal for families with some ski experience, as well as skiers and riders who enjoy playing across the run — that is, cruising a nice strip of groomed corduroy with options to test themselves on moguls, side-hits, and trees on the same run if they wish.

“The grooming here is great, and we get to brag about having the 2002 Olympic speed competitions,” said Oliver Zen, a snowsports instructor and guide with Snowbasin. Indeed, you can take the tram up and drop in from the start points of both the men’s and women’s Olympic downhill courses, though we don’t advise attempting the 70-plus mile per hour speeds of the racers. 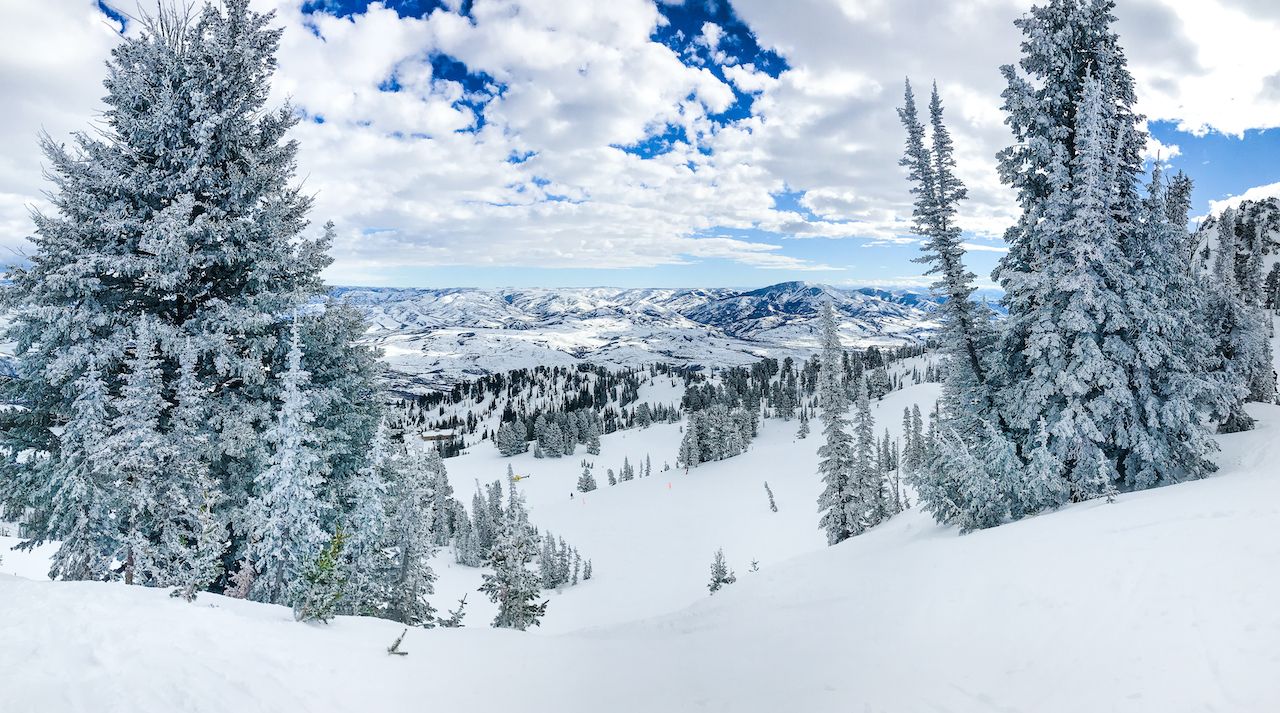 Advanced skiers and riders should arrive with a checklist and get to work early. After warming up, head up the Strawberry Gondola and proceed through the access gate to the skier’s left at the top. After a few minutes’ hike, you’ll reach the drop-in point for Lone Tree, Snowbasin’s answer to the famed Corbet’s Couloir at Jackson Hole, and the resort’s most iconic run. Ski its steep, rock-lined chute, and you’re worthy of the “I Skied Lone Tree” t-shirt for sale at the base. The other must-do is reaching No Name Peak. The hike here from the top of the John Paul Express lift takes about 15 to 20 minutes and puts you above 2,600 feet of a steep vertical drop with options for open bowls or tree runs (we suggest a mix of both) on the way down. For a further challenge, strap on a pair of skins and hike the Needles or Porky Cirques, when conditions allow, dropping back into the ski area after a series of steep turns in untracked powder.

Unique features at Snowbasin include the full-moon uphill skin-and-ski sessions, which take place on the eve of the full moon, the “First Tracks” program that puts you on-mountain with a guide an hour before the general public, and the impeccably adorned lodges — handbuilt from alpine timber and with restrooms and lounge areas on par with what you’d expect at a high-end hotel. The resort’s owners, the Holding family, better known for owning Sun Valley, have a thing for ornamental interior design. That starts with chandeliers; the family once purchased a glass-blowing company specifically to make glass chandeliers in red glass for their resort. Another chandelier onsite is made by Chihuly himself. 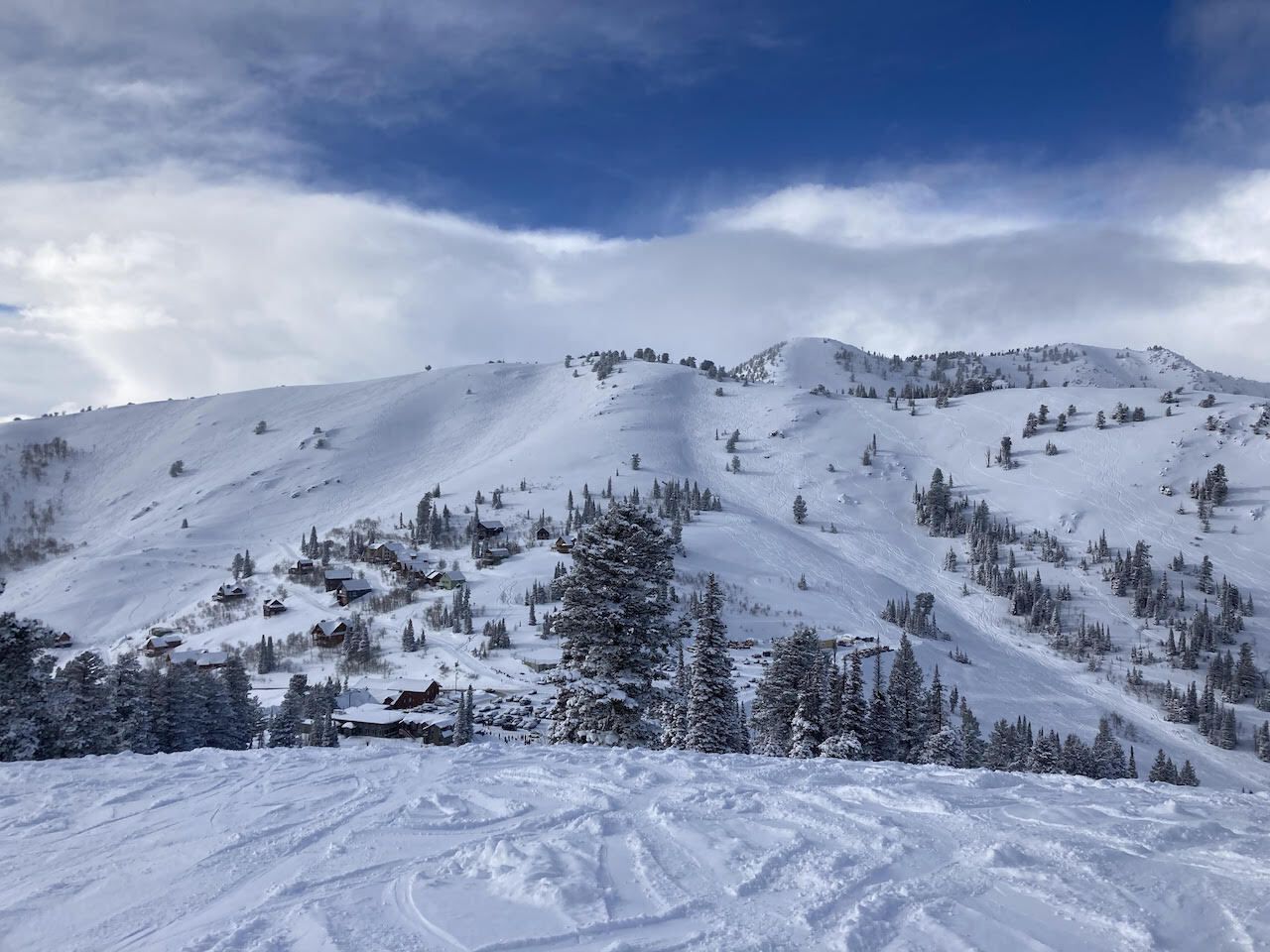 Another Utah ski spot deeper in the Wasatch is Powder Mountain. By skiable acreage, this is the largest ski resort in the US, with 8,464 acres of mostly ungroomed steeps. It’s an “inverted” ski area, meaning the base lodge is at the top, and much of the terrain — including Lefty’s Canyon, Lightning Ridge, and James Peak — is not lift-accessed, but rather via skinning or by taking a snowcat. Other terrain zones like DMI and Wolf Creek are open only to guided excursions.

Still, there’s a ton available for beginner, intermediate, and expert skiers that you can get to from the nine lifts. The best way to approach this mountain is to circumnavigate it, meaning park and start at Timberline Lodge and ski from lift to lift, taking about two hours to work around the mountain with one run on several of the lifts. To plot your day, check out the resort’s 3-D trail map.

Many options for detours present themselves along the way. Advanced skiers and riders can head up the Timberline lift near the lodge and begin with a powder-filled run through the glades of Woody’s World. This area culminates at the highway, where a bus picks up hitchhiking skiers and shuttles them back to the Sundown Lift. Head up here, and if another challenge is in order, exit the lift and traverse over to the Lightning Ridge Cat ($23.31, purchase ticket at lodge). A seven-minute cat ride puts you at the top of the ridge, where you can drop in or hike further for guaranteed fresh tracks. 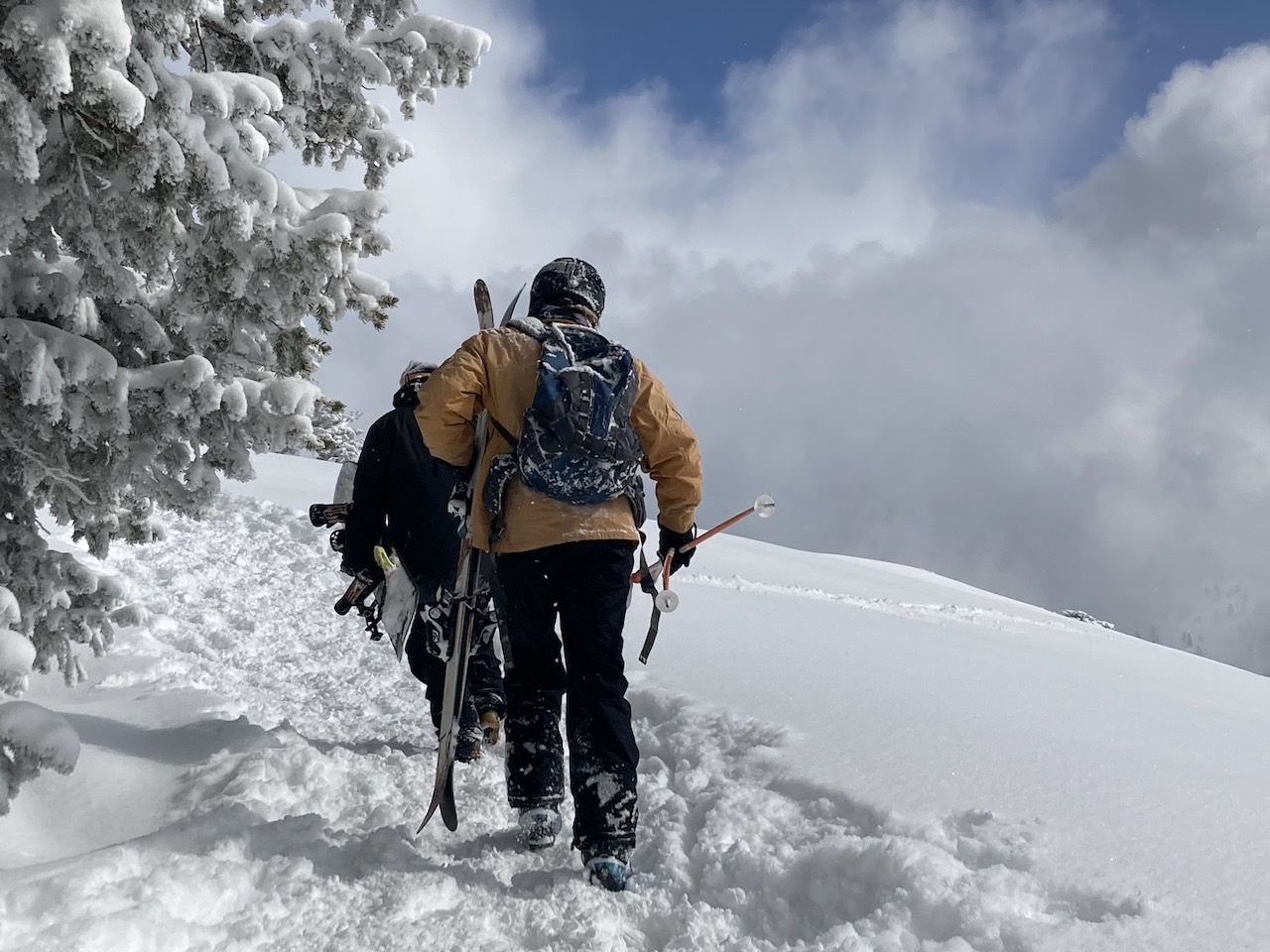 Powder Mountain’s unique business model is what ensures those untracked turns. The resort caps lift tickets at 1,500 per day and sells season passes only as an exclusive “membership.” Three thousand memberships come up per year, including renewals, and while the resort sells on-mountain real estate and offers a private club for its members, the waiting list for membership exceeds 2,000 people — but you can skip the line if finances are in your favor and you can afford property onsite.

JP Goulet, Powder Mountain’s Marketing Director, explains that the cap on tickets offers a better experience for everyone on the mountain, particularly given that the resort wants to maintain its low-key “local” vibe, even as it grows in popularity.

“As we started the development and saw that we were getting more popular, we put the cap in,” Goulet says. “It’s kind of like getting tickets to a Rolling Stones concert.”

Although, it’s far cheaper than a Stones show. A day pass at Powder Mountain runs $99 for a full day and $34 for night skiing only, valid until 9 PM.

Experience the city’s rebirth with a post-ski brew 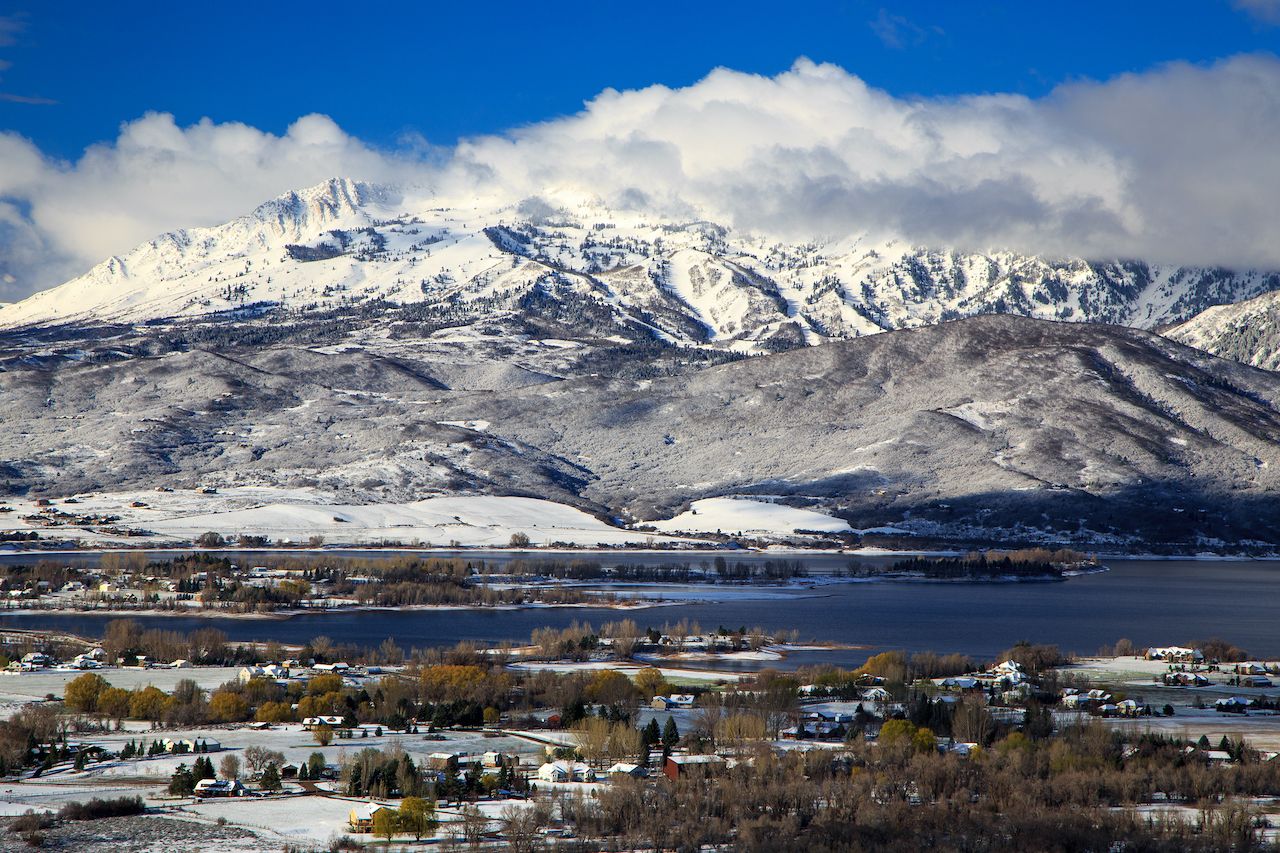 Pat Winslow epitomizes the rise of Ogden. A 42-year veteran of the railways, Winslow paid his dues, retired, and after years as a regular homebrewer, opened Ogden River Brewing in October 2020. The tap and dining room inhabit a stretch of town under conversion from a warehouse district to a trendy neighborhood of new townhomes and walkable stops, including the brewery, a not-uncommon site in Ogden these days and the perfect spot for a post-ski brew.

Roosters Brewing operates three locations in the city, the flagship of which played a key role in kick-starting Ogden’s modern mountain-metro lifestyle. This 25th Street location launched in 1995 and was among the first new establishments to open shop in the area’s revitalization effort, helping lure Ogdenites and visitors back to downtown. Its casual, family-friendly ambiance helped the street, which had succumbed to boarded-up storefronts, reinvent itself. The long-running dive bars are still present, though they now sit alongside hip establishments like the Unspoken speakeasy bar and Tona Sushi, an upscale sushi and sake bar run by lifelong Ogden resident Tony Chen.

Lodging prices in Ogden are a far cry from what’s found in high-end ski towns, though so are the boutique hotel offerings. On the budget end, the local Days Inn has rooms as low as $45 per night. Stay closer to the action on 25th Street at the Hampton Inn, Comfort Suites, or Courtyard by Marriott for $130-200 per night.

The other option for your Utah ski adventure is Huntsville, a quiet mountain town on the shores of Pineview Reservoir that’s divided by two distinctly different ideologies: that of Brigham Young and that of Johnny Cash. Beyond the divey Shooting Star Saloon — famous as the oldest still-operating bar west of the Mississippi and for its burger, topped with what’s claimed to be a knackwurst sausage — there’s not much going on here in winter. But staying here puts you within 15 minutes of Snowbasin and 20 of Powder Mountain, an easy way to score first tracks as long as you don’t mind giving up the social scene. The Escapes at Edgewater, a collection of upscale waterside rental condos, makes the isolation easier as units come outfitted with ping pong and other games along with a private hot tub.