Oktoberfest doesn’t actually start in October. The original festival in Munich starts in mid- to late-September every year. Though that doesn’t stop your local German beer hall from throwing parties through Halloween, if you had a sudden aspiration late in the year to do Oktoberfest in Germany, that sudsy ship has likely sailed.

The good news is not every country is so strictly German about Oktoberfest timing. In fact, some of the top Oktoberfests in the world don’t happen until well into October. Here’s a look at some of the most surprisingly awesome Oktoberfests outside Germany. 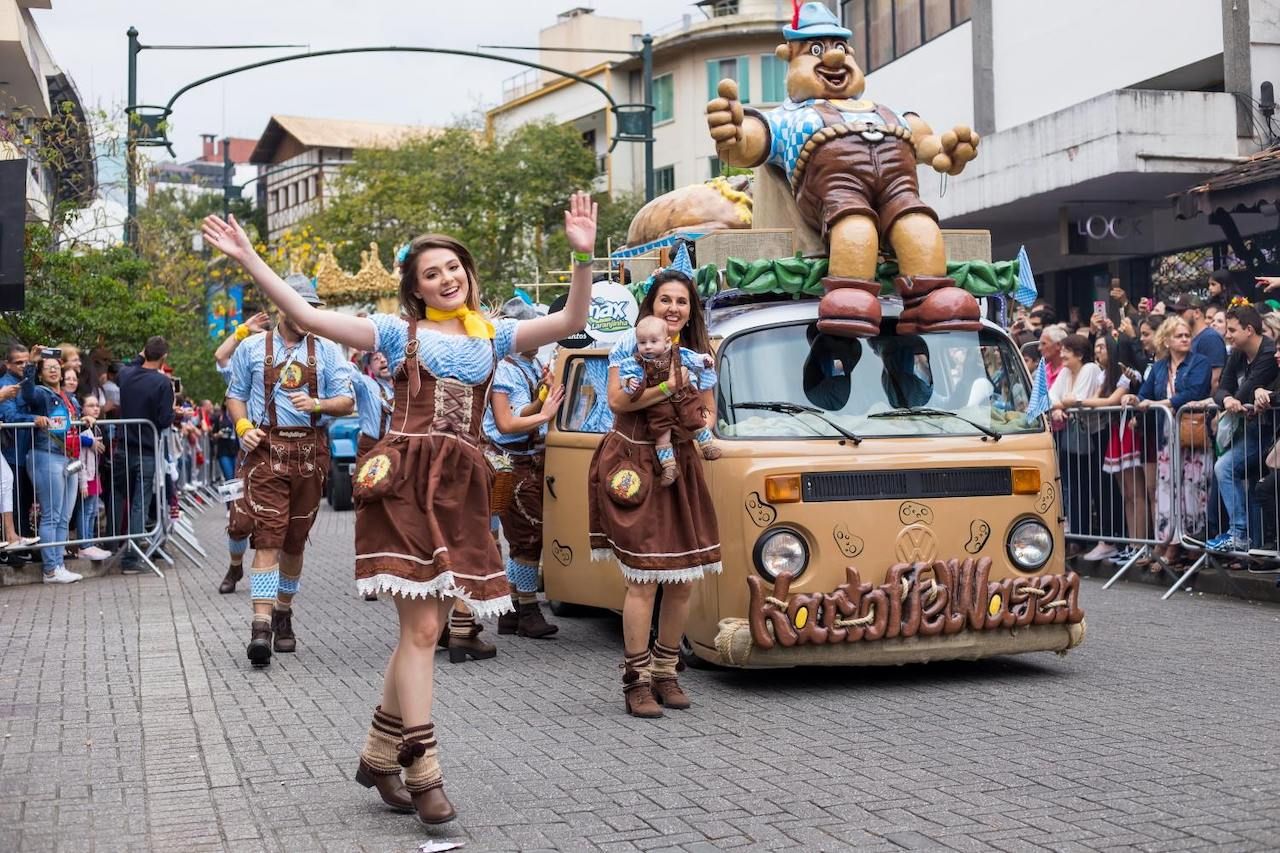 Oktoberfest in Brazil might seem like an odd concept, but there’s actually a sizeable German population throughout South America. Blumenau is a German town in the southern state of Santa Maria that flawlessly combines a Bavarian beer drinking festival with nonstop Brazilian celebration. The town was settled in 1850 by a German pharmacist, and is about as close to the Alps as you’re getting in Brazil, with a beer garden set up in Para Hercílio Luz, a beer museum, and a place called Sausage Street.

This year marks the 36th Oktoberfest in Blumenau, where you’ll find beer-chugging contests, live music, and loads of Brazilian and German beers. It runs from October 9-27, kicking off with a huge parade of traditional German folk dances and floats, and continues through two weeks of partying as only Brazilians can. 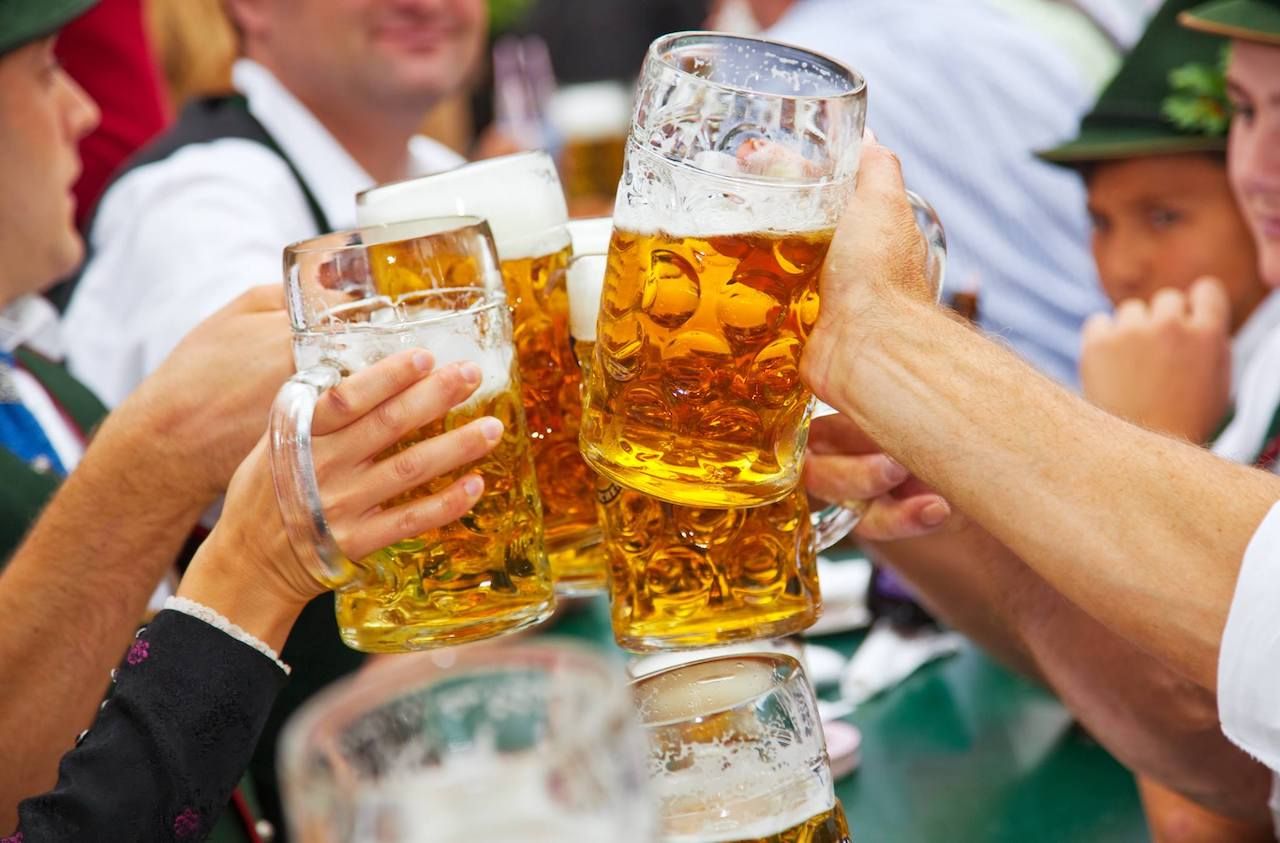 Though Oktoberfest is decidedly an Old World European celebration, it fits surprisingly well under the imposing towers of the Hong Kong skyline. That’s where you’ll enjoy the biggest Oktoberfest celebration in Asia, Marco Polo German Bierfest, which takes place in the parking lot of the Marco Polo Hotel. Though Polo himself was Italian, that little detail is overlooked from October 17-27, when beer is free flowing and German folk band Die Notenhobler plays from 7:30 PM to 11:30 PM nightly.

Literally thousands of people show up each evening for the band’s shows under a gazebo made to look like a merry-go-round. Under the stage, a sea of long tables welcomes guests with two-for-one beers from 6:00 PM to 7:00 PM and a party that goes until midnight. This year, it is also introducing a transparent marquee so you can enjoy the skyline without having to step outside. 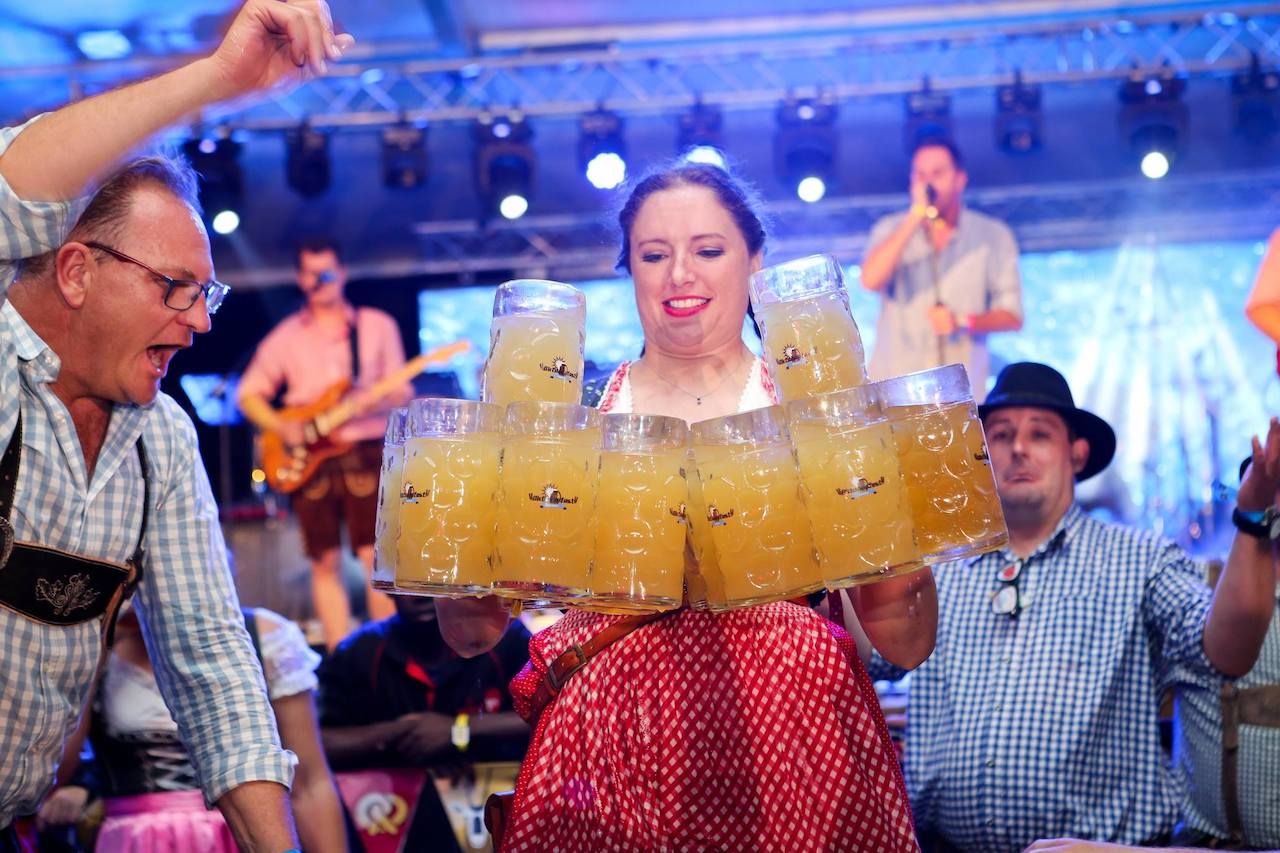 If you’re unfamiliar with the history of African colonialism, Namibia was once a German colony in the early part of the 19th century. Though much of the country’s culture has been returned to its native people, the continent’s largest Oktoberfest lives on as a weekend-long celebration of beer in Africa.

The event has the feel of a German Oktoberfest with a decidedly African twist. Features like zebra lederhosen and cheetah print steins are a normal part of the party. Sure, those clothes made for mid-fall Europe can get a little sweaty during the African summer, but you’ll still find plenty of light Namibian beer to help cool you off. The celebration, originated by German settlers on the outskirts of town over 60 years ago, has grown into one of the biggest parties of the year, welcoming European visitors, expats, and locals alike. 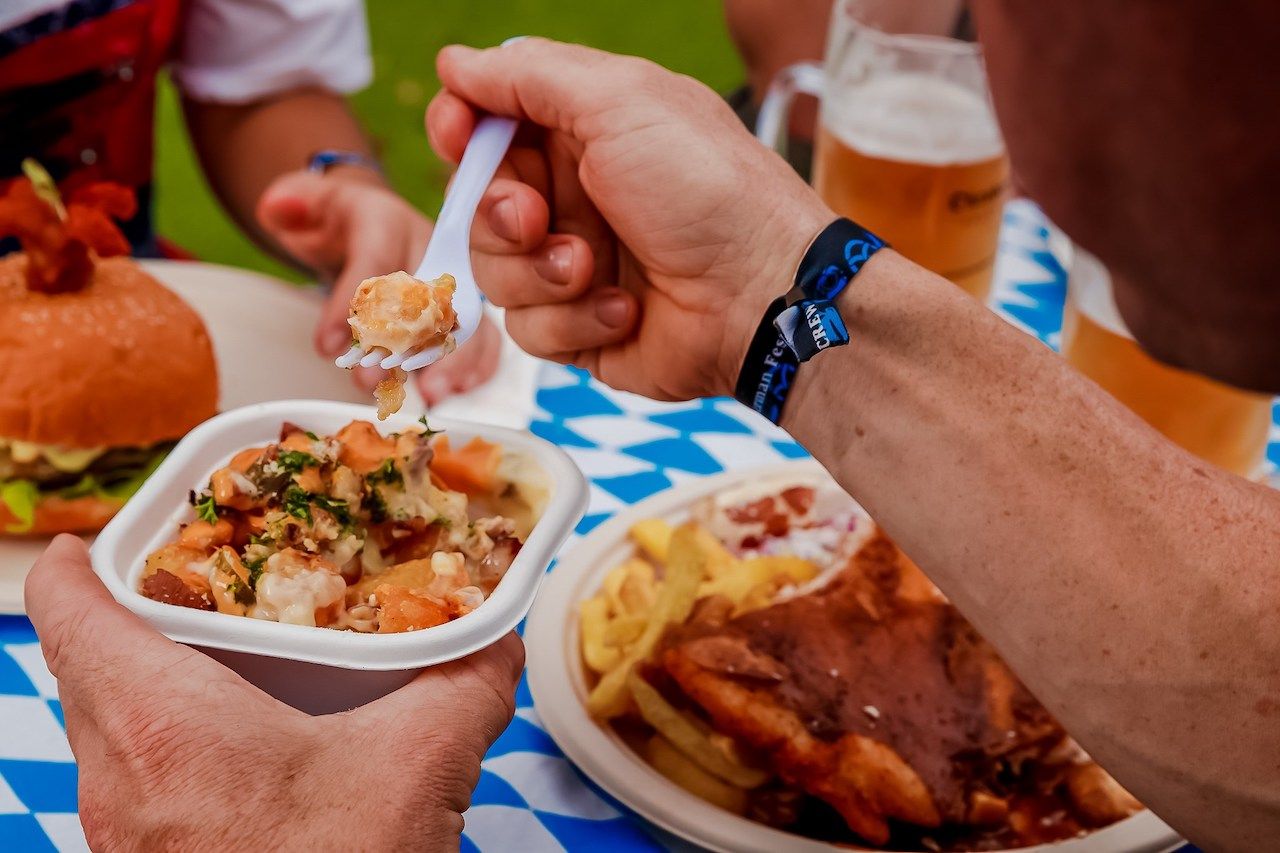 Though relatively new to the Oktoberfest scene, Australia’s largest celebration has some of the most entertaining events of any Oktoberfest in the world. Leave it to the Aussies to take a beer-and-brat holiday and introduce stuff like a Bavarian Strong Man competition, complete with nailing and donut-eating contests. The Australians also have a women’s division where women compete in steinholding, cow-milking, and “dress like a Bavarian” contests. There’s also a beard competition (presumably just for men) with natural, freestyle, and moustache divisions.

Beyond the human spectacles, Brisbane has plenty of beer, mostly from Tucher, the beer brand that sponsors the event, as well as from local Burleigh Brewing, which provides the dark dunkels. You’ll also find a massive German food hall and live music until midnight on Fridays and Saturdays. The festival runs over two weekends in 2019: October 5-7 and 12-14. 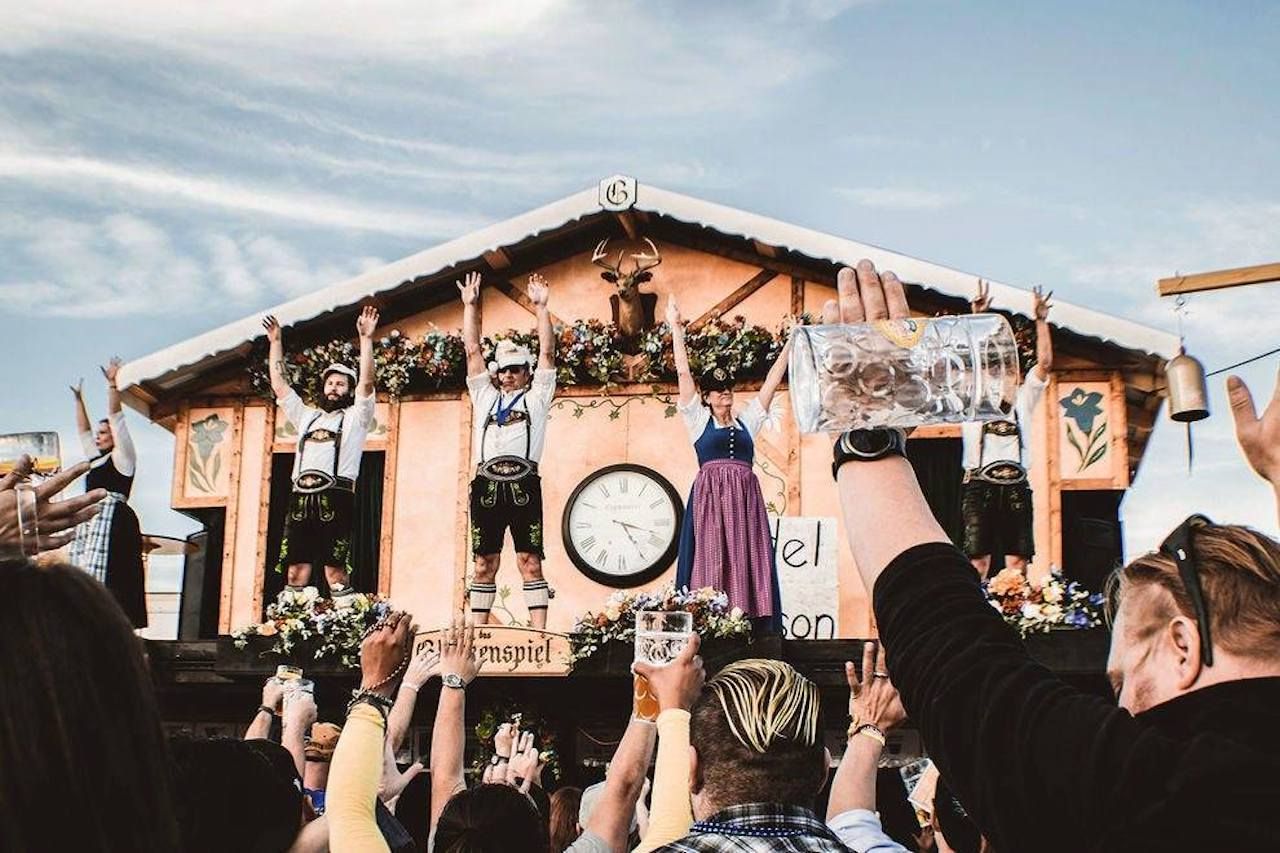 While Cincinnati probably has the best-known Oktoberfest party in America, many people overlook little Tulsa, Oklahoma, which hosts one nearly as crazy every year. The annual festival, dubbed Linde Oktoberfest, takes over River West Park on the third weekend of the month, where people partake in hoisting steins and events like keg races, wiener dog races, and beer pong. Because America, dammit.

Linde Oktoberfest also gives you the chance to do the chicken dance in the place it was first introduced to the USA. Yes, the wing-flapping dance craze made its American debut as part of the polka band festivities back in 1981, which have since evolved into a full-on German music festival. There’s also plenty of food and some of the best weather of any Oktoberfest in the world, as anyone who’s been to Oklahoma this time of year can attest. 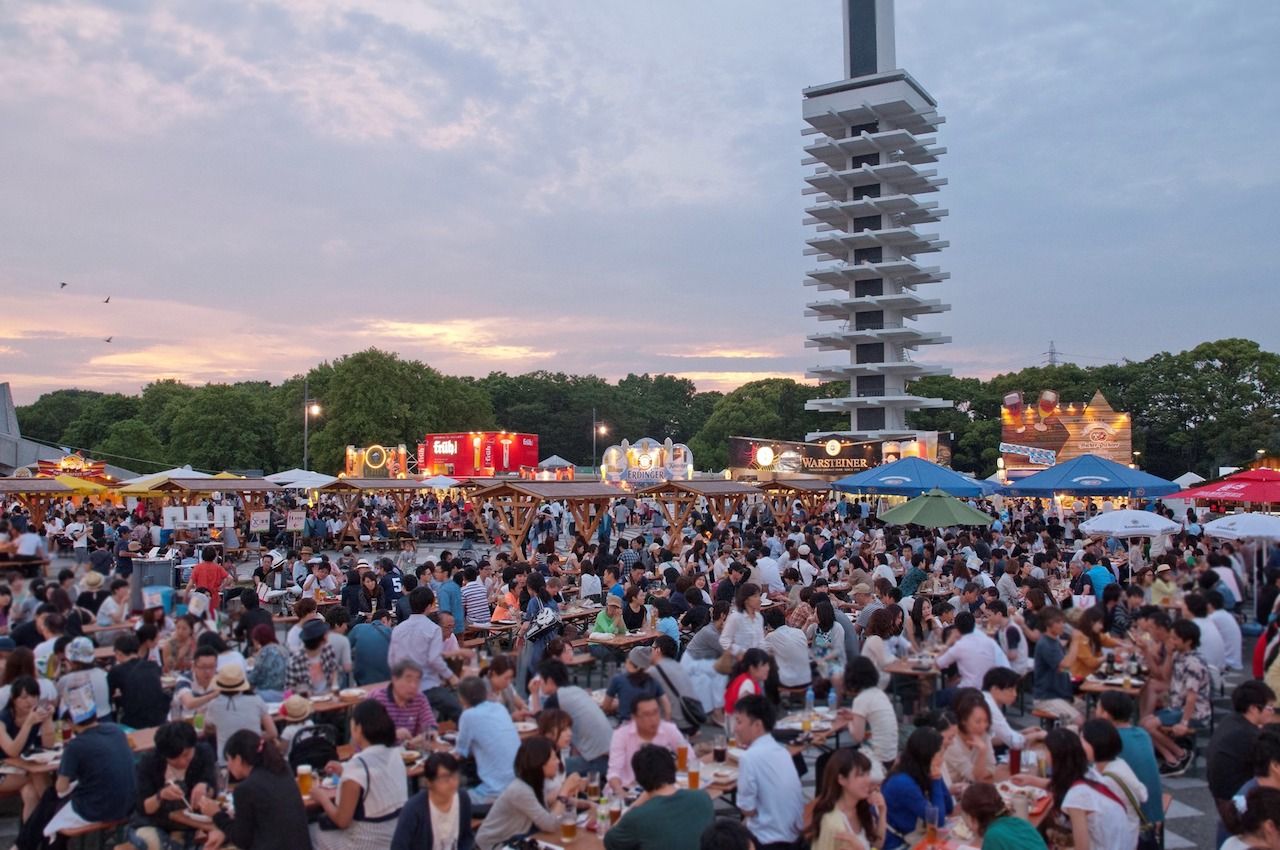 When you’re in one of the biggest cities in the world, one Oktoberfest simply isn’t enough. That’s why Tokyo’s version of the German tradition has two events — one in April and another near the end of August, making both some of the earlier Oktoberfests in the world. Both events take over the man-made island of Odaiba in Tokyo Bay and offer a huge selection of Bavarian beers alongside loads of Japanese favorites.

The atmosphere on Odaiba is a little surreal, with polka music playing in the background as you stroll past Japanese signs and food stalls offering everything from pizza to shaved ice. You can still find traditional German food, too, like pretzels and sausages. 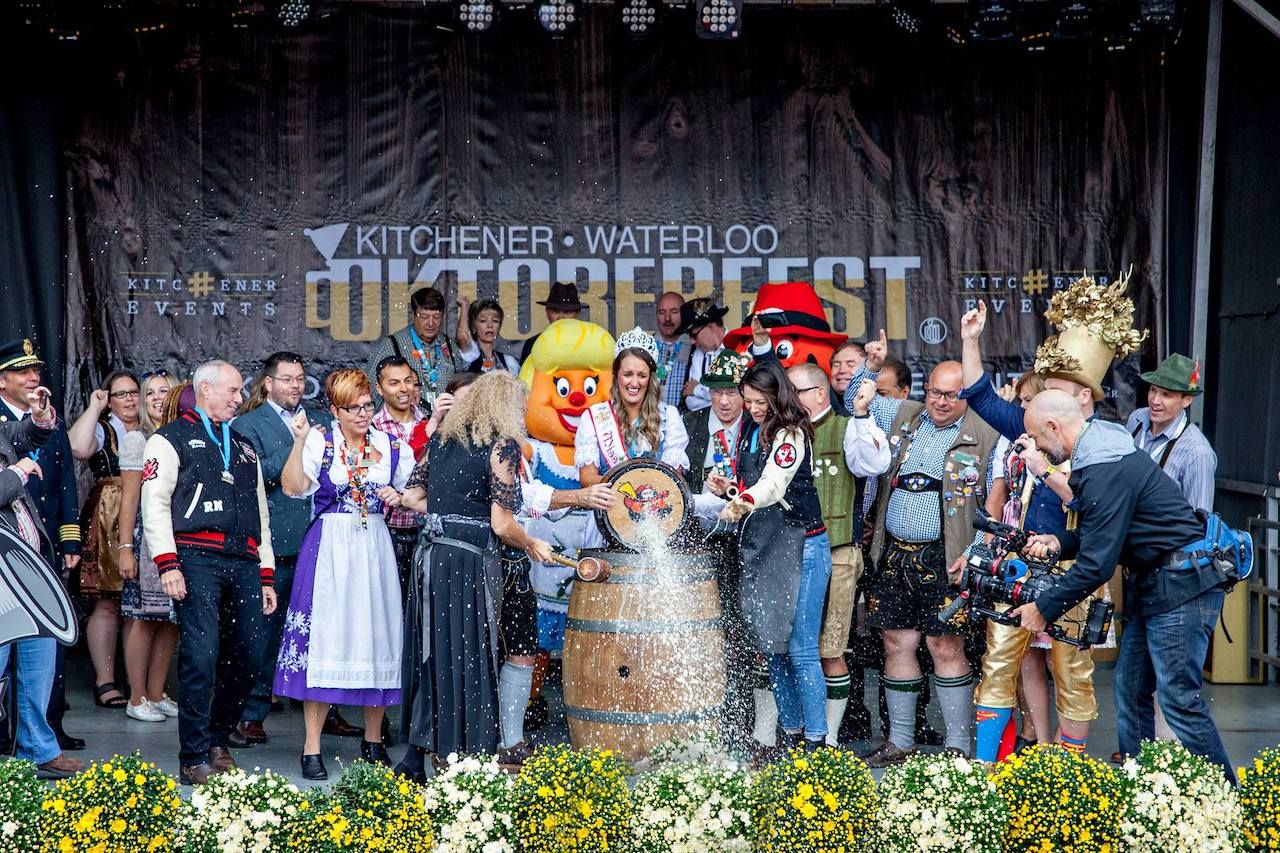 Though exact statistics don’t really exist for Oktoberfest sizes, these Canadian twin cities have a good claim to hosting the largest outside Germany. Over 700,000 people show up to celebrate over nine glorious days. This year marks the 50th anniversary of the festival, which also takes place during Canadian Thanksgiving and has the country’s largest Thanksgiving parade.

Much like it is in Munich, this festival is spread out all over the city, featuring 17 different festhallen full of beer, music, and live entertainment. The whole week is packed with events other than the parade, including barrel races, a Miss Oktoberfest pageant, an Oktoberfest fashion show, and, because it’s Canada, axe throwing. Plus, there’s a contest where local radio stations make Oktoberfest-themed parodies of top 40 songs. 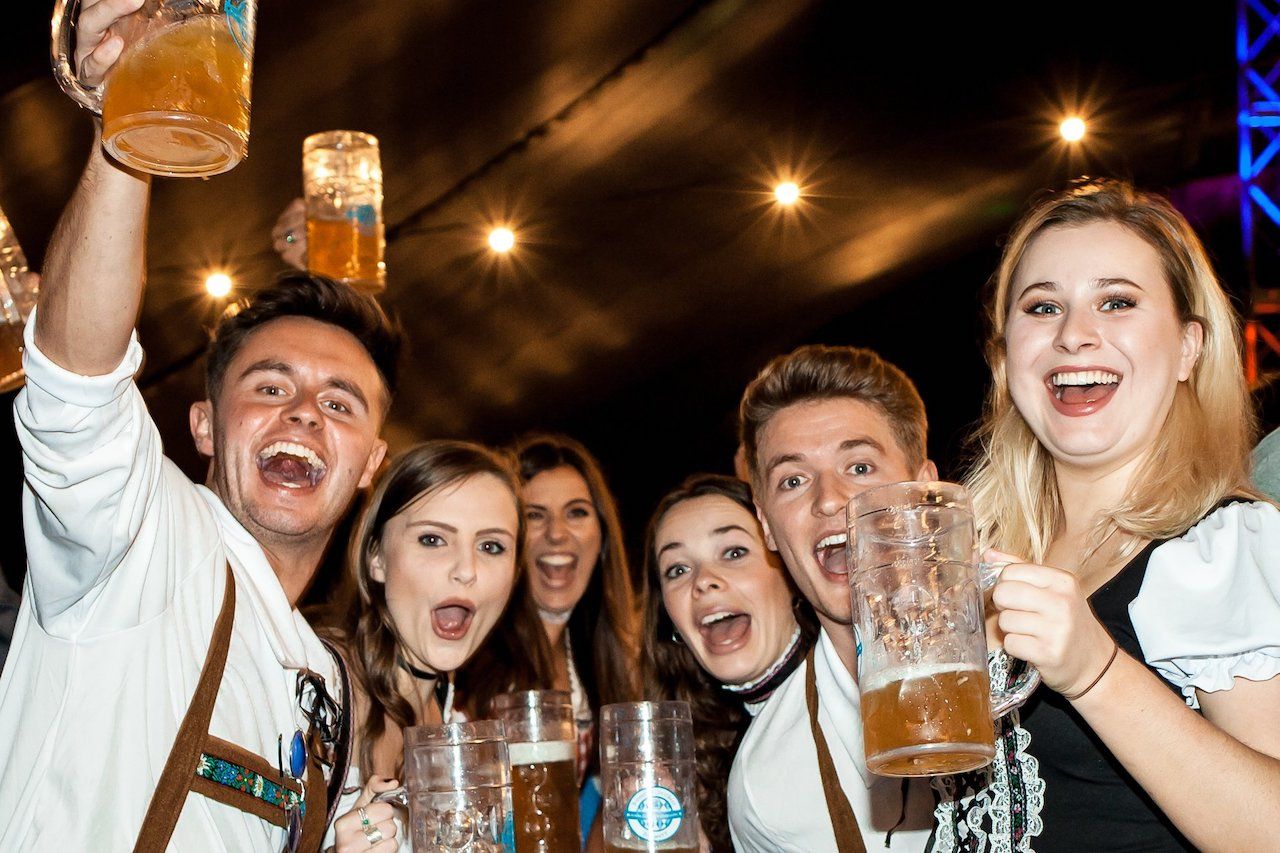 When October has sunsets around 4:00 PM, you’ve gotta get your Oktoberfesting in early. That’s why Stockholm hosts one of the first Oktoberfests of the year, kicking off the festivities in mid-August. This ensures plenty of daylight to enjoy the weekend-long festival of beer, food, and pop music.

Don’t you dare think of coming to Sweden without your dirndls and lederhosen either. Nearly everyone who attends the festivities in Stockholm is dressed up, and failing to dress up too will make you look like that guy who refuses to wear a costume to a Halloween party. German garb or none, you’ll still be able to get in free on the festival’s first two days, a major plus in one of Europe’s most expensive capital cities. 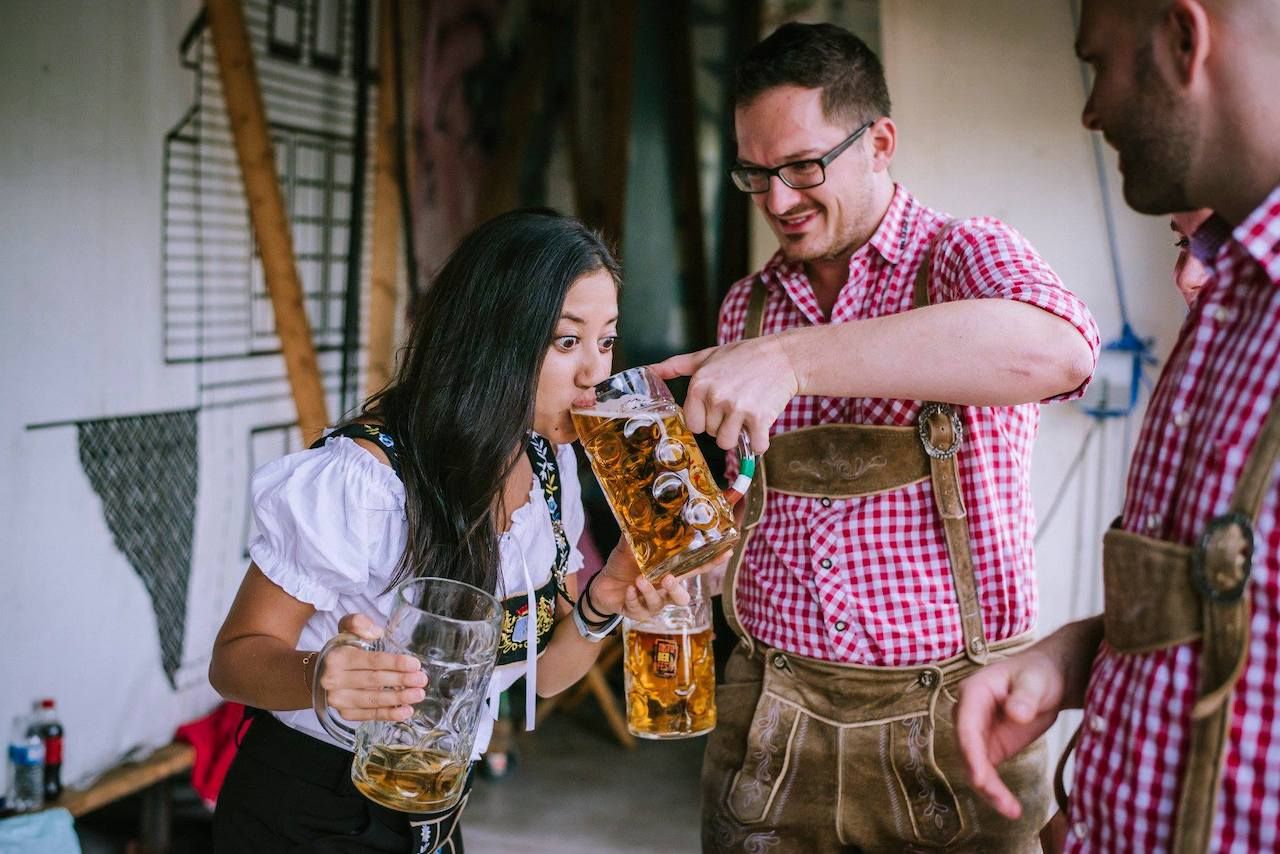 Tiny Frankenmuth, Michigan — population 5,247 — has a special place in the annals of Oktoberfests worldwide, decreed in 1996 as the first celebration to go on with the official blessing of the Munich original. It was also the first place to import Hofbrauhaus beer in the United States, as the storied Munich brewery became an official sponsor in 1997.

Today, the town in the heart of “Little Bavaria” swells to nearly four times its size for this end-of-September blowout. If you can find a hotel room you’ll also find plenty of good-natured Midwestern beer drinkers enjoying pretzels, schnitzel, and live Bavarian music on a big wooden dance floor. This year marked the 30th anniversary of Frankenmuth’s Oktoberfest.

Festivals10 Best Oktoberfest Celebrations in the US Worth Traveling To
Tagged
Beer Festivals Food + Drink
What did you think of this story?
Meh
Good
Awesome