The Oregon Coast has been known as the People’s Coast for over 50 years, ever since the state passed a law granting free and open access to all 363 miles of its majestic beachline. Oregon’s rugged shores are a Pacific Northwest treasure that deserve to be explored in their entirety. Without that kind of time, though, the Three Capes Scenic Loop is an excellent alternative. The 40-mile excursion is an easy day trip from Portland and showcases everything that’s best about the Oregon Coast — from towering sea stacks loaded with migrating birds to secluded, sandy beaches to headland forests of spruce and pine that are ideal whale-watching destinations. It just may become your favorite summer road trip. Here’s what you need to know. 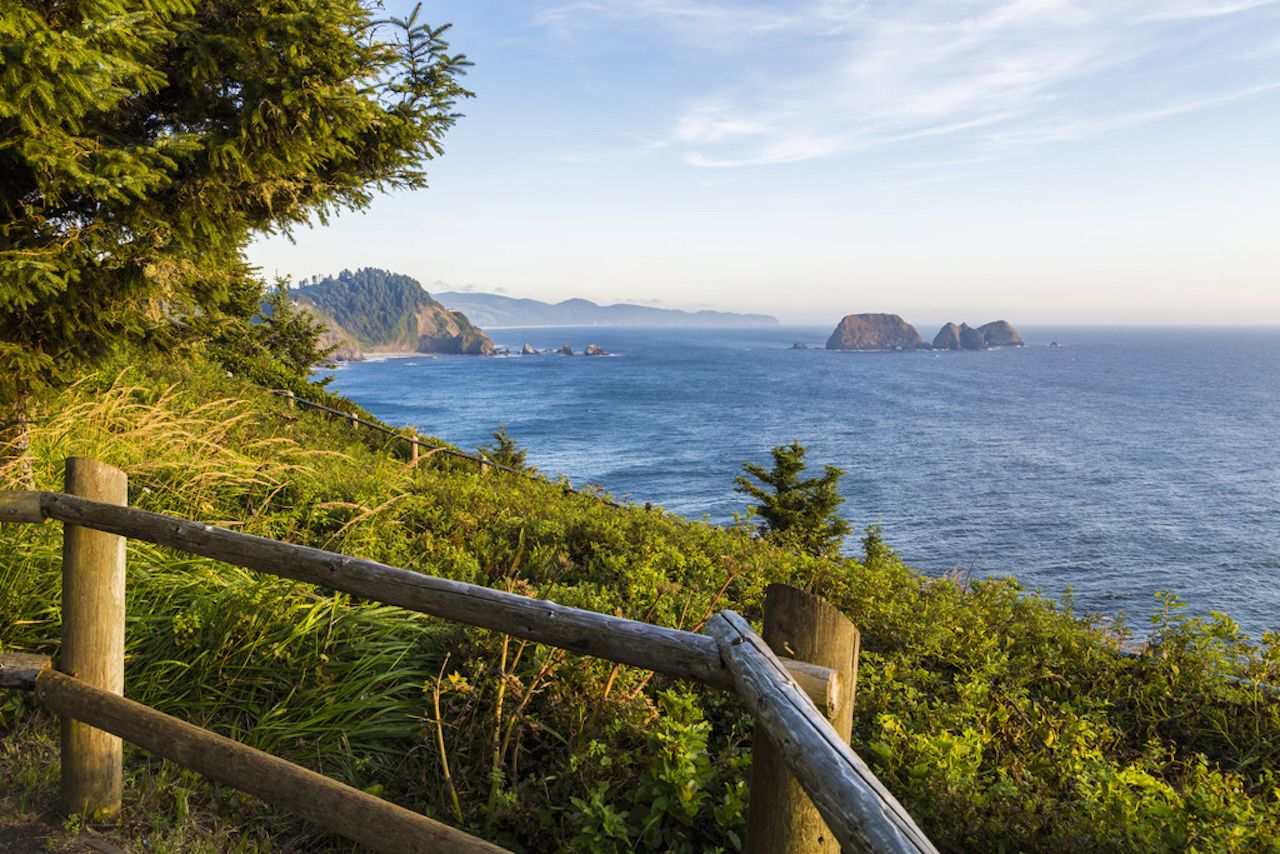 The stars of Oregon’s Three Capes Scenic Loop are Cape Kiwanda, Cape Lookout, and Cape Meares, enormous rock outcroppings that stretch into the Pacific Ocean. Each of these capes has its own distinct personality, so it’s not enough to just park it at one. You should take the whole loop. Pack your hiking shoes, because you’ll want them for treks throughout the forest and along the headlands. Don’t forget your beach towel and sandals; you’ll need them too.

Get an early start, so you’ll have time for hiking, especially at Cape Lookout. From Portland, drive west on Highway 26 through the Tillamook Forest. When you get to the township of Tillamook, you’ll have to choose how to approach this loop: from north to south or south to north. There’s no wrong answer. Just keep your eyes peeled for the green sign on the road pointing you toward the Three Cape Scenic Loop. For our purposes, we’ll start by heading south to Pacific City, home to Cape Kiwanda, and take the loop northwards from there. 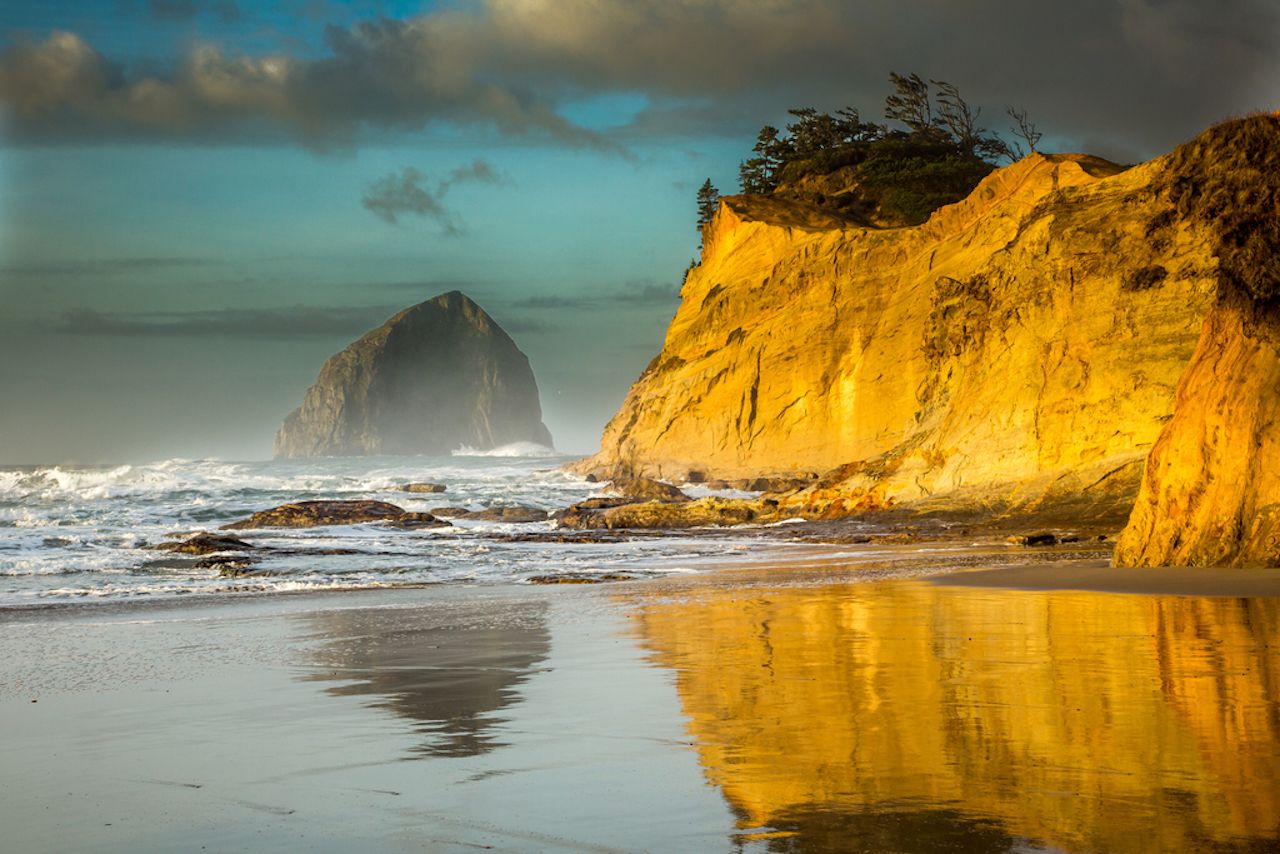 Cape Kiwanda gracefully bows across the north edge of the long, sandy beach at Pacific City. At its feet, crystalline tides rush in and out, carving smooth chasms through the basalt rock formations. In the distance rises the tip of Haystack Rock — not to be confused with the Haystack Rock at Cannon Beach, made famous in the film The Goonies. This massive sea stack peaks at 327 feet tall.

When showing up at Cape Kiwanda, it’s hard to know what to focus on: the cape itself, Haystack Rock, or the 240-foot massive dune towering in the sky and the intrepid souls scurrying up its sandy slope. If you decide to join them in a trek to the top, you’ll be rewarded with panoramic views in all directions. 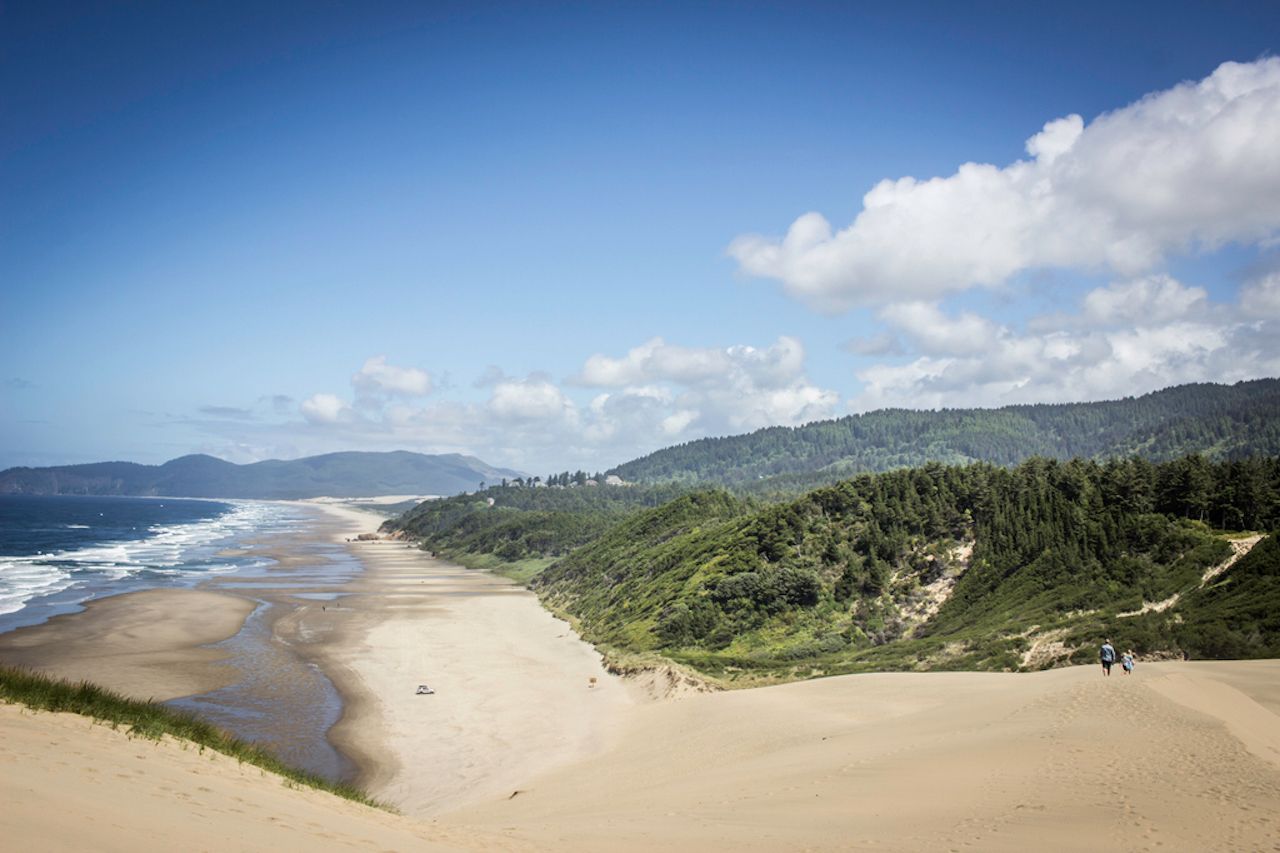 If you do ascend the dunes, you’ll notice warning signs, a fence row, and oodles of curious folk disobeying the aforementioned warning signs and climbing through the fence. Please don’t. While the stunning views are alluring, Oregon State Parks urges visitors to stay within fenced areas as the sandstone cliff at Cape Kiwanda edges can splinter off.

Oregon’s coast range is the true meaning of sublime: beautiful with a huge dash of danger. When visiting, keep in mind that these sandstone cliffs are unstable and have been known to give way. In fact, to the west and north, you’ll see those sandstone cliffs and bowls being smashed by the turbulent Pacific, their chasms filled with boulders and logs.

To the south, on the other hand, you’ll behold Pacific City, a hub bustling with hotels and restaurants. Head into the beach town to grab a pint of the city’s homebrew, Pelican Brewing, and a meal, because you’ll need it for the adventure ahead. While you’re waiting, keep your ears perked; if you’re lucky, you’ll hear the blaring horn of a dory boat as it rushes ashore with its haul of fresh catch.

Part One detour: the Nestucca Spit

After you’ve climbed the sand dune at Cape Kiwanda and soaked up views of Haystack Rock and Pacific City, consider taking a detour to the south end of Pacific City to visit Bob Straub State Park. Here, you can escape the crowd in Pacific City and hike through coastal marshes of salal shrub and atop grassy dunes along the Nestucca spit, an example of the dynamic range of ecosystems on the Oregon Coast.

While there are many great spots for beachcombing on this trip, the Nestucca spit is especially perfect because it’s lightly trafficked and loaded with driftwood. As you ramble down the spit, a clear view of Haystack Rock and Cape Kiwanda will be just over your shoulder. If you have an all-wheel-drive vehicle, then speed along this remote stretch of Oregon beach to the very end, where solitude awaits you. 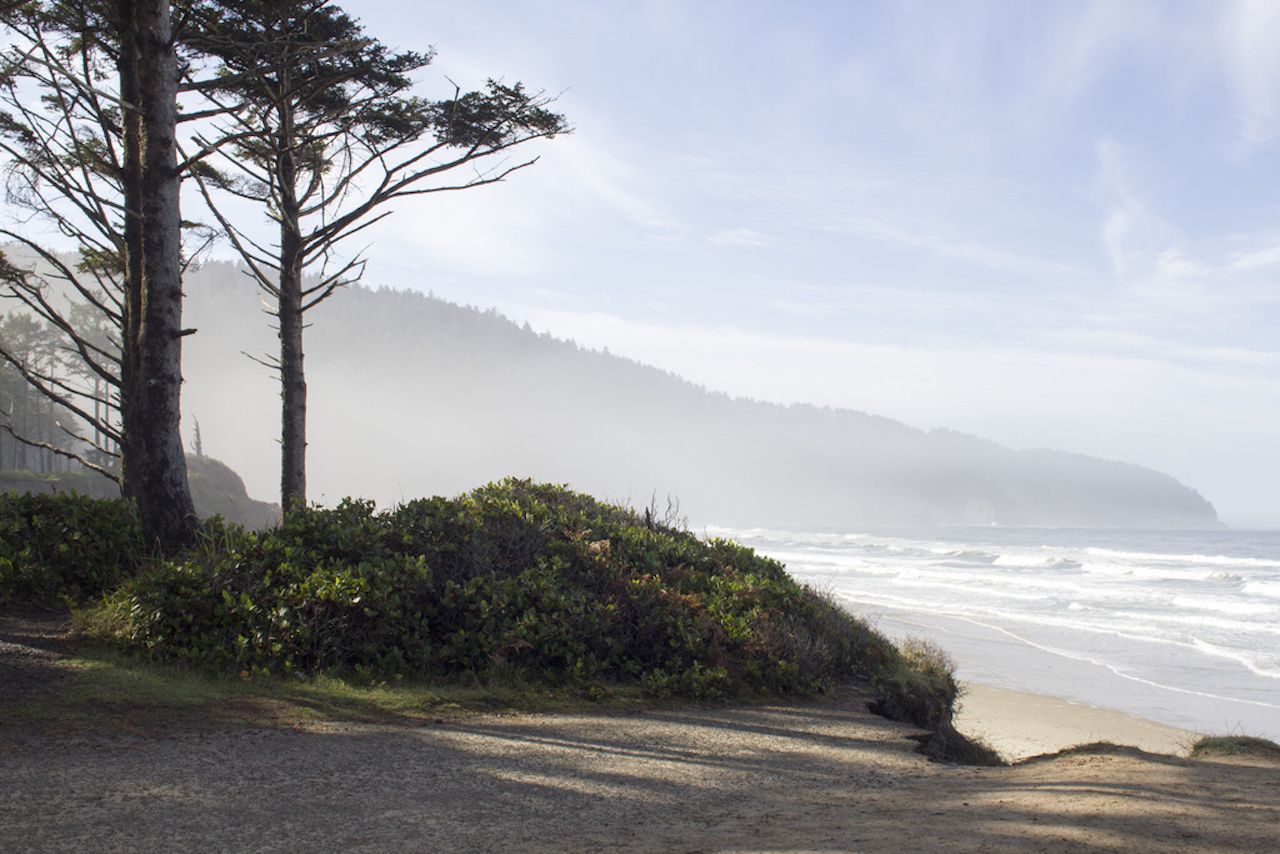 When you’re ready, travel north to Cape Lookout State Park, a popular area for camping, yurting, and picnicking. One of the unique features of Cape Lookout is that you can hike the headland by taking The Cape Lookout Trail, a smooth out-and-back of about five miles. It snakes through dense pine forest but never strays far from ocean views.

At the end of the trail, you will arrive at the head of the cape, where you will find a bench and what feels like the edge of the Earth. At that moment, you’ll understand why it’s called Cape Lookout. Miles from shore and hundreds of feet in the air, it’s great for gazing onto an uninterrupted view of the Pacific before hiking back to the trailhead. If you’re visiting during spring or late fall, watch for migrating whales. 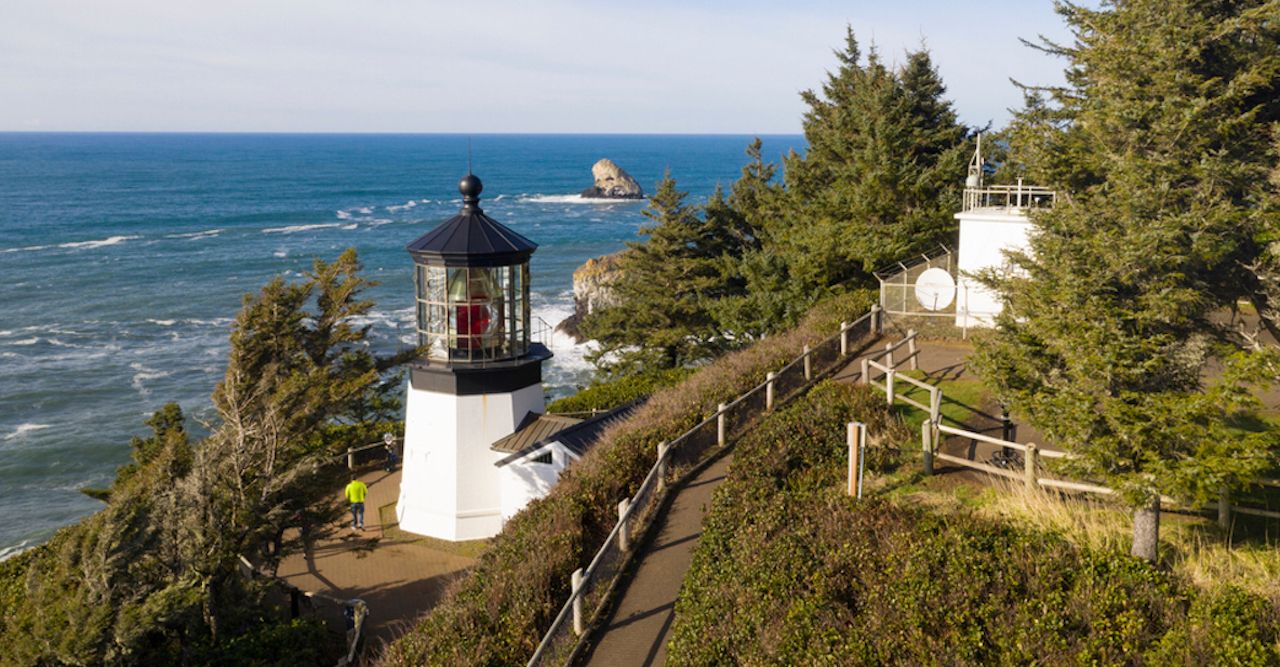 Cape Meares is the northernmost stop in this loop. Cape Meares, a national wildlife refuge, has several claims to fame. Among them are the Octopus Tree, the largest Sitka spruce tree in the state of Oregon, and the 1890s Cape Meares Lighthouse, which hosts free tours from May to September.

Two other notable features of this cape are Pillar Rock and Pyramid Rock. Like all the sea stacks on the Oregon Coast, these rocks are part of the Oregon Islands Refuge, a project to preserve and protect wildlife. US Fish and Wildlife Services reports that these two sea stacks harbor an upwards of 20,000 nesting seabirds.

If you’re looking for one last hike, Cape Meares has the seldom-traveled Cape Meares Beach Trail. At 1.8 miles round trip, the moderately traveled trail will immerse you in old-growth forest; you’ll be surrounded by lush, leafy ferns as you make your way along switchbacks. Eventually, you’ll arrive at a marshy lowland of beach grass and wind-gnarled spruce trees. 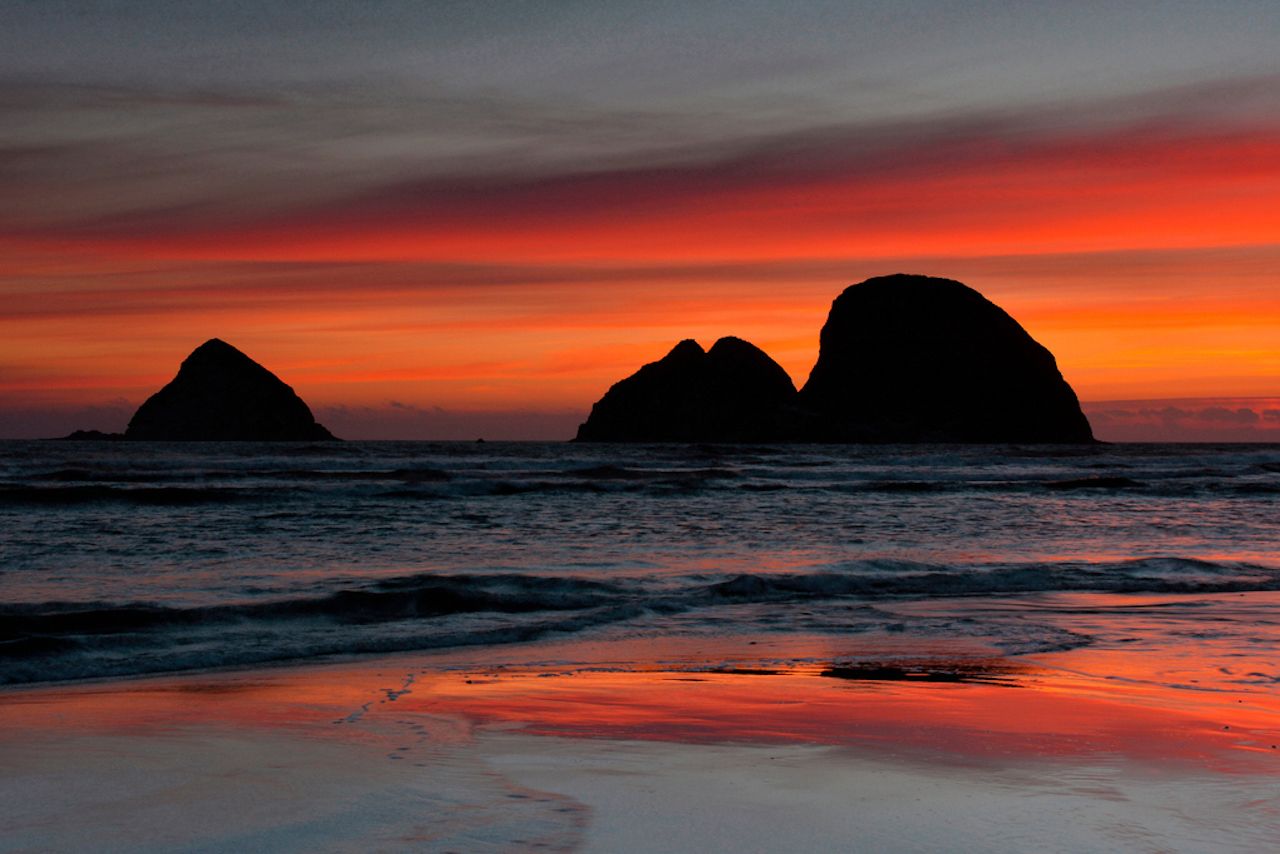 After you’ve exhausted yourself, head down to Oceanside, just a few short miles south from Cape Meares. With its hotels, beach houses, restaurants, cafes, and dynamic beach, Oceanside is the perfect last stop. Here, you can relax and enjoy the sunset — and maybe wind down by doing some rockhounding, as this is a popular spot for agate hunting.

The logic in starting at Pacific City and concluding in Oceanside becomes apparent when you spread out on a blanket and catch the sunset on the Three Arches, one of the wonders of the Oregon Coast. But, if you take the reverse route, you’ll be just as happy to behold the sun sinking next to Haystack Rock and Cape Kiwanda at Pacific City. It’s win-win either way you go, so start exploring.

Road TripsThis Is the Most Beautiful Road Trip Through the Pacific Northwest
Tagged
Beaches and Islands Road Trips Trip Planning Oregon, United States
What did you think of this story?
Meh
Good
Awesome