You see pictures of long, pristine dinner tables in the middle of nowhere on a bucolic farm or a breathtaking beach, filled with an Eden of colorful produce and picture-perfect plates of farm-fresh food. You may think it can only be found on a Pinterest board or a celebrity wedding magazine spread, but these dream-like dinners actually do exist, and for people that aren’t country music stars getting hitched. 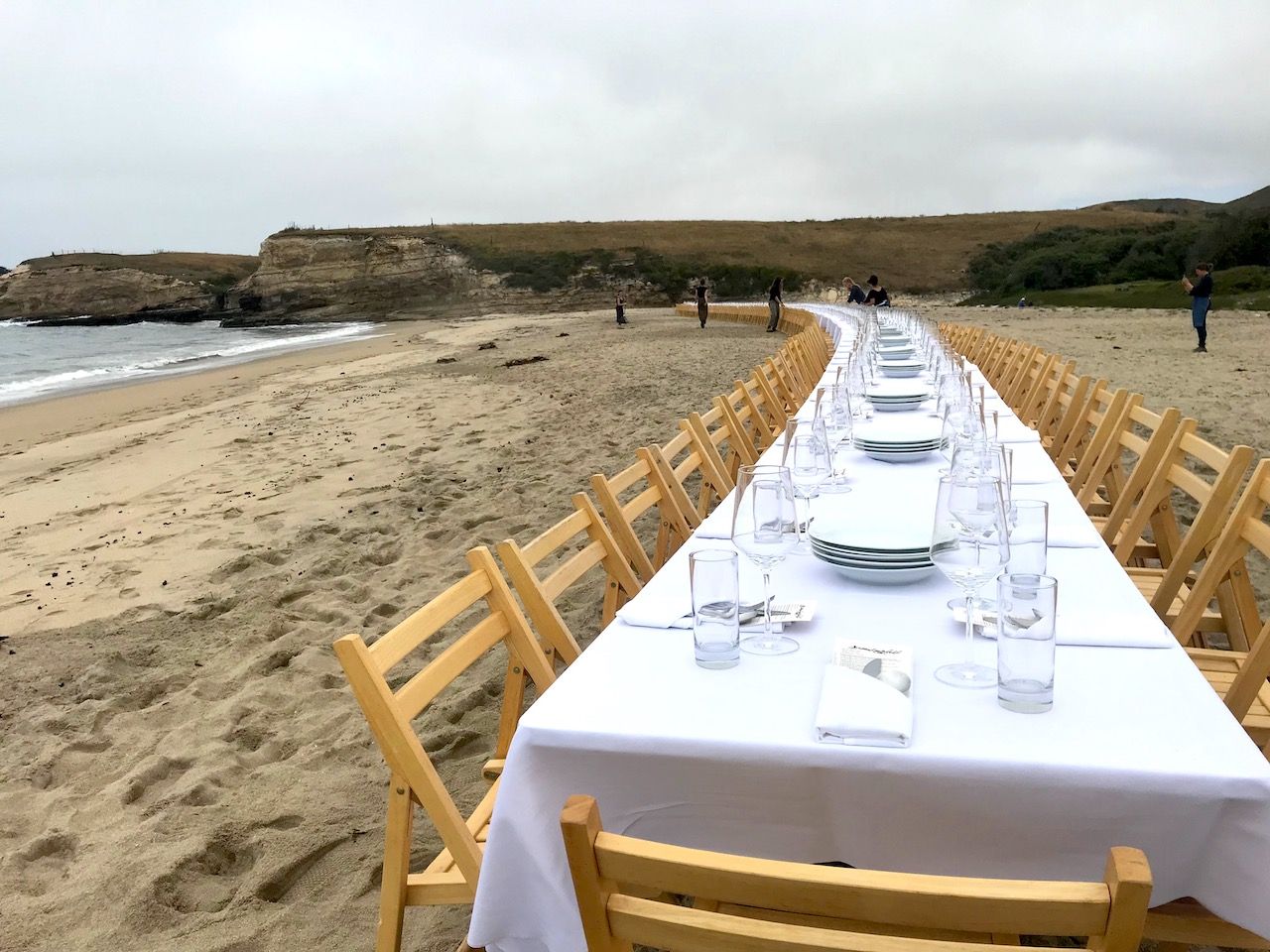 Outstanding in the Field brings these wondrous dinners to foodies around the entire country, asking diners to bring their appetites, a willingness to socialize, and maybe their own plate (it’s a quirky tradition, and they’ve amassed quite a collection over the years). Founded in 1999 in Santa Cruz by chef and renowned landscape artist Jim Denevan, Outstanding in the Field was originally conceived to disrupt the stiff, white-gloved fine dining scene, and restore a communal breaking of bread between dining companions, friends, and strangers alike, by seating them all at one, giant white table in the great outdoors.

Since its inception, Outstanding in the Field has taken its signature red, 1953 tour bus to all 50 states and 15 countries, for farm-to-table — or rather, table-to-farm — dinners. While the stops on Outstanding in the Field’s annual tour change every season, some team-favorite locations make an appearance on the itinerary year after year. The Secret Sea Cove in Santa Cruz, held again this July, is one of those special places. With a beach so private that almost no one else is allowed to use it the rest of the year, it’s easy to see why the team keeps coming back. 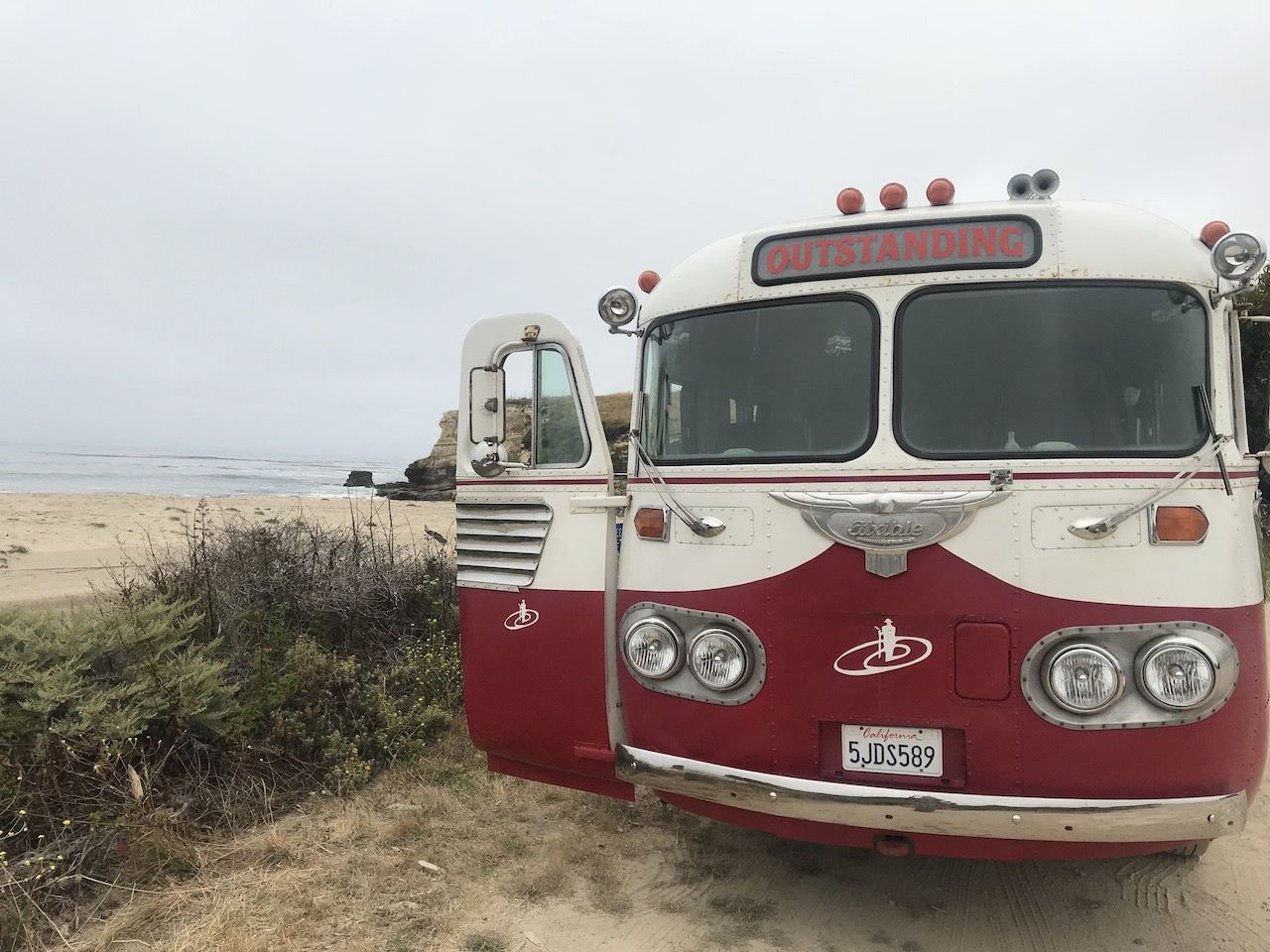 Here, diners sip local wine with the natural soundtrack of crashing waves behind them. They dig their toes in the sand and hope that the threatening rising tide doesn’t swallow them up before they’ve finished eating. Sea otters, seals, and dolphins are all known to make appearances, and the taste of salt in the air means the seafood couldn’t get any fresher. And in the hands of host fisherman Hans Haveman, you know you’re getting the prime catch of the day.

Just like all Outstanding in the Field dinners, no menu is revealed ahead of time. Instead, diners put their faith in the host chefs, who take inspiration from the local land and ingredients to create mouthwatering, family-style meals. This particular dinner was helmed by chef Brad Briske of restaurant Home in nearby Soquel, California. While you don’t go to a seaside dinner without having an intense love of seafood, enthusiasts still had to be surprised by the offbeat, innovative plates: squid and watermelon salad with basil, lemon, and chili oil; halibut sausage with potatoes and anchovy aioli; and fresh hook-and-line caught cod, clams, and mussels in a tomato-saffron fumet. 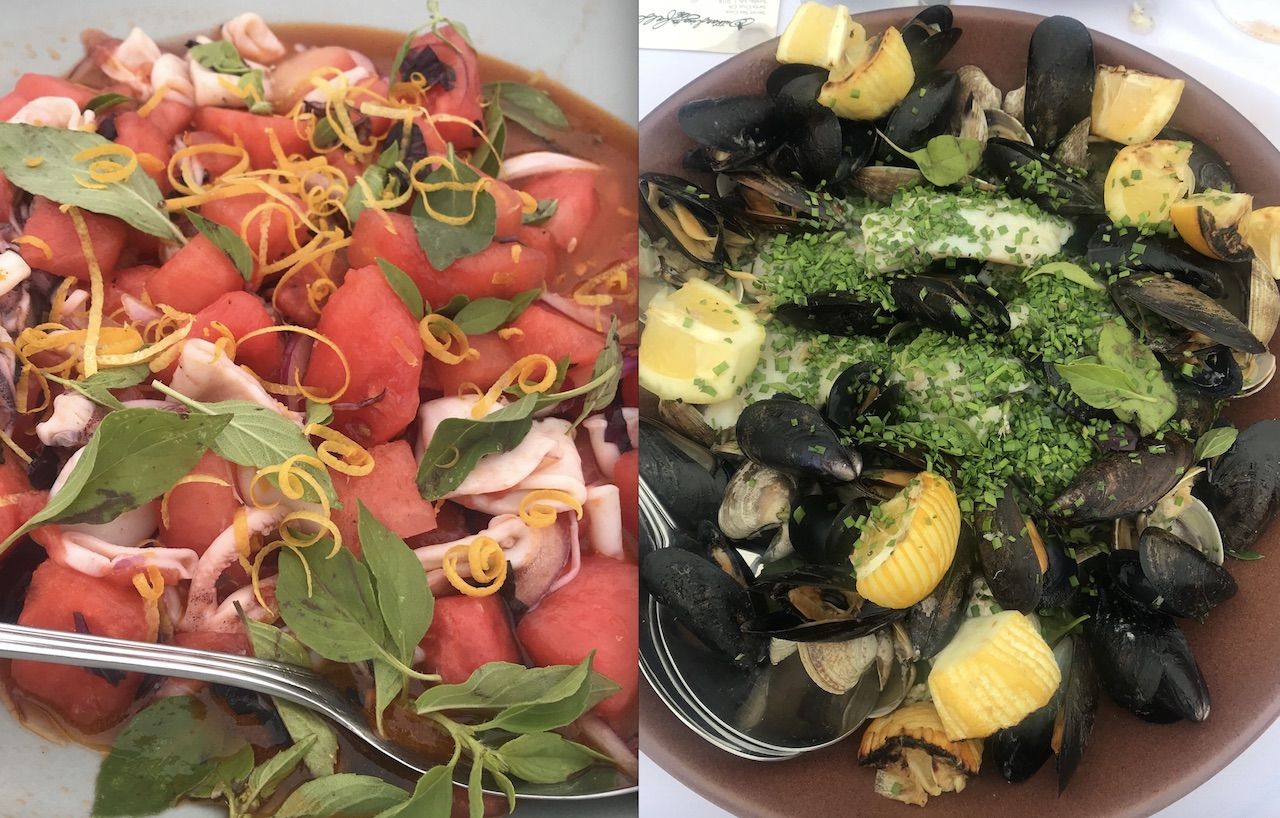 And, of course, there’s dessert: almond-ricotta cake with local fresh strawberries and cream, served with drinking chocolate, which is a fancy hot cocoa that doesn’t come in powder form nor is topped with marshmallows. No matter — you’ll be plenty cozy even without the marshmallows when you end the night sitting next to a massive, raging beach bonfire. 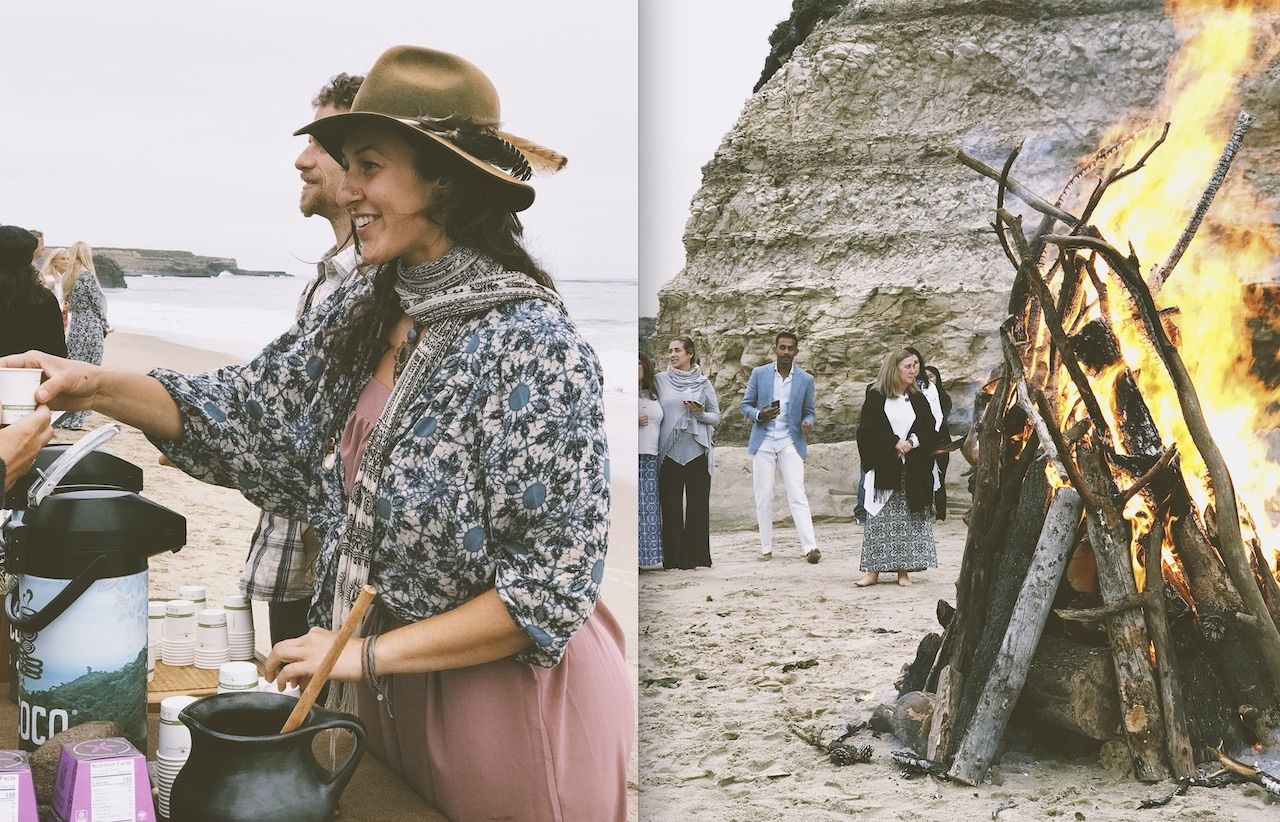 Photo: Esther Lang/Outstanding in the Field

As magical and “once-in-lifetime” as this sea cove dinner sounds, it’s far from the only fantastical offering from the Outstanding in the Field team. There are dozens of stops on the North American tour, which traverses the entire United States and parts of Canada before circling back to the West Coast for a few final fall events in California and the end-of-season Foraging Feast in Pescadero in November. The 2018 tour has already made its way through California, the Pacific Northwest, and the Rockies, but there’s still the entire Midwest, Northeast, Mid-Atlantic, and South to go. There are even two international legs in Burgundy, France and Bermuda.

While many of these events are already sold out — some sell out the second tickets go on sale in early spring — a few still have tickets, and they’re no less spectacular. From an organic Italian meal outside Portland, Maine to an international twist on classic Texas flavors in Houston, here are 13 Outstanding in the Field events you can — and should — go to this year.

Last year, chef Mike Kenat and the team at Salt of the Earth laid down a slab of wood across the entire table and filled it with a delectable array of cured meats, cheeses, pickled veggies, and fresh fruits — and you’ll likely enjoy a similar cornucopia this year. That, and other rustic American food, will be sampled at a beautiful fruit farm, full of apple trees and strawberry patches.

Green Gardens Community Farm sits just outside of Kalamazoo and Ann Arbor, and features a nostalgic wrap-around porch and a greenhouse that keeps the farm churning through Michigan’s harsh winters. You’ll enjoy fine summer weather though, as you eat a seasonal menu from chef Chris Kidd, who’ll be using the farm’s bounty as his key ingredients — it doesn’t get more local than that.

Pittsburgh residents can take a much-needed break from the busy Steel City in this nearby, rolling green farm in New Bethlehem. Here, Pennsylvania-born chef Justin Severino will show what he learned cooking in California for many years, with cuisine influenced by both coasts.

Portland, Maine is on the tip of every culinarian’s tongue this year, with local restaurants receiving national acclaim by foodie authorities everywhere. See what all the buzz is about by trying food from two of Portland’s best Italian restaurants — Piccolo and Chaval — in the peaceful setting of Bumbleroot Organic Farm in Windham just outside the city. You should especially look forward to dessert: chef Ima Jeil Lopez was recently nominated for a 2018 James Beard Award for Outstanding Pastry Chef.

Enthusiasts of sustainable, grass-fed meats will definitely be keen to dine at Pat’s Pastured farm near Providence, Rhode Island, which is home to cows, pigs, ducks, and chickens. The pastures are constantly rotated: the animals eat the grass, then move to another field, before returning to the original once the grass is nice and long. Chef Benjamin Sukle will be cooking up some of these proteins in non-traditional styles.

There’s no better way to usher out summer than with a bushel of fresh, briny New England oysters. Oysterman CJ Husk will shuck some for you, and let you get up close with the process in the seagrass. Chef Charlie Foster is sure to incorporate these oysters into the menu, but you can expect a diverse farm-to-table spread.

Journey to the scenic, underrated Berkshires for a meal at Woven Roots Farm, a 10-acre, no-till, bio-intensive farm that uses regenerative agricultural practices to stock local markets. Chef Brian Alberg is a Berkshires native and founder of Berkshire Farm & Table, so you can rest assured that no one knows his way around the local ingredients better than him.

You won’t need a few spare thousand dollars to rent a helicopter to take you to the Hamptons to enjoy this meal. In a region known for its exclusivity, Amber Waves Farm — true to its name — welcomes people with open arms. At this down-to-earth Hamptons dinner, you’ll enjoy chef Dominic Rice’s Greek-inspired dishes, which can include anything from house-made charcuterie with marinated Kalamata olives to grilled octopus.

You don’t need to go far out of Philadelphia to experience the quiet countryside. Culton Organics in Silver Spring, Pennsylvania has been in the family since 1741 and grows over 70 types of vegetables. Many of these rare, heirloom vegetables will be on the menu, interpreted by chefs Kevin and Michael at helm, a contemporary American restaurant in Philly.

Whether you’re in Washington DC or Baltimore, make your way over to the Even’ Star Organic Farm in Lexington Park, Maryland. Here, you can guarantee the veggies, fruits, and flowers are scientifically perfect: farmer Brett Grohsgal has a Master’s in Soil Science, and Christine Bergmark has advanced degrees in plant physiology and ecology. This masterfully farmed produce will be utilized in chef Michael Rafidi’s creative menu, which also might feature some of the hundreds of free-range, egg-laying chickens roaming the farm.

Just because you’re in Texas, don’t expect good ol’ barbeque. Instead, you’ll dive into a truly interesting fusion of Ukranian and French-Canadian food, with some local Texas flavors, courtesy of chef Ryan Lachaine of Riel in Houston. You’ll savor it at the dreamy Whitehurst Heritage Farms, where pasture-raised, chickens, turkeys, and forested hogs roam free.

You may not associate the arid landscape of Arizona with a plentiful harvest, but the dry state has some of the lushest produce. Steadfast Farm outside of Phoenix is a bio-intensive market farm with organic fruits, veggies, and pasture-raised poultry for eggs. Former food truck chef Jeff Kraus, now of neighborhood cafe Crepe Bar in Tempe, has a great working relationship with farmer Erich Schultz in the Phoenix culinary community, so their harmonious collaboration is sure to yield a soulful dinner to remember.

For a truly luxe experience, head to Thermal outside of Palm Springs in the Southern California desert, where Outstanding in the Field puts on an annual dinner for VIPs at Coachella Music Festival. Flying Disc Ranch is a date garden that feels like a palm tree oasis. Los Angeles chef Russ Sevilla will be cooking up a refreshing, elevated Californian meal under the cool canopy.

Celebrate Father’s Day with Temecula Olive Oil Company! Treat Dad to an event he will never forget. Enjoy at our of our ranch, live entertainment, hand crafted cocktails and locally sourced food in our olive grove. For more information, tap the photo or visit our website.

The Outstanding in the Field’s North American tour begins to wrap up at the Temecula Olive Oil Company near San Diego, where it initially began their cross-country bus journey. The full-circle trip is especially rewarding because the olives are now perfectly ripe for harvest season. Chef Brian Redzikowski will return for his second stint at Temecula with an entirely new menu, and we can only assume there’ll be lots of bread to soak up all that delicious olive oil.

Tagged
Food + Drink Insider Guides
What did you think of this story?
Meh
Good
Awesome